Lately I’ve been accruing frequent flyer miles like I do shoes–obsessively and with abandon. Europe has been the object of my desire, and I must say, I’m definitely smitten. I’ve become impassioned by the languages, history, and cultures. What I have become most obsessed with is the food. I hold the Four Seasons completely responsible for that.

I’ve always loved food, but I’ve never been a picky eater. I can stomach hospital and school cafeteria food without so much as a single complaint. I find this ironic considering I’m now the Houston Travel Editor for The Daily Meal. But after dining at Four Seasons Prague, Florence, Milan, Paris, London, and Geneva, all that has changed. I’m no longer a disgrace to foodies everywhere.

I’ll admit that I’ve fallen down the rabbit hole after my queen-like treatment by those Four Seasons properties. To say I was a little spoiled after visiting would be a gross understatement. When I returned to Houston I expected someone to provide me with a little stool for my purse, a bazillion courses, clean utensils between those courses, and perfectly paired wine. My reality check was a bit disconcerting to say the least.

While I’m no longer at Prague’s CrotoCrudo where Executive Chef Richard Fuchs grilled me a delicious black pork chop or in Milan where I became bewitched by all things white truffle, I can still reflect on all the fabulous dishes I’ve been fortunate enough to taste. Behold, my top ten favorite dishes from my recent trips to Europe:

Ahhhh….Paris. My three-hour lunch at Le Cinq will get its own individual post, but for now I’ll just give you a little taste {pun intended}. What you’re looking at is every little kid’s dream. This, my friend, is just a sampling taken from a very special dessert cart.

I’m not sure that ‘cart’ is even the right term for what this is; it would be like calling a Rolls Royce a ‘car’. Nonetheless, this cart is filled with candied fruit dipped in chocolate, fudge filled with fruits and nuts, a homemade marshmallow rope that’s cut at the table, real pineapple lollipops surrounded in marshmallow, and countless other divine choices. This diabetic coma on wheels will make you ask, “Who the heck is Willy Wonka?” 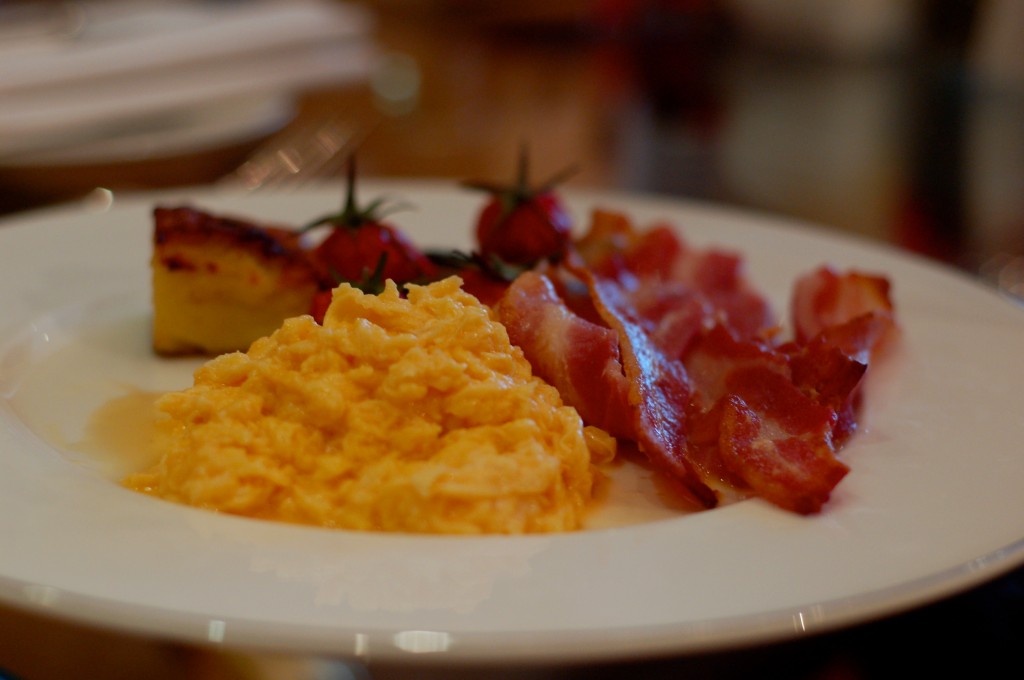 I know this must look like an ordinary plate of bacon and eggs, but I can promise you that it was much more to me. After nearly a month-long quest for scrambled eggs in Europe, I finally found breakfast nirvana in the form of Four Seasons Park Lane’s room service. I’m not really sure what was driving my egg obsession, but it was quelled with a few fork fulls of that yellow goodness. A couple dashes of Tabasco sauce and all was good in my world.

I arrived to London a bit later than planned, so the kitchen tour with Davide Degiovanni, the Executive Chef for Amaranto, was delayed until the next day. Instead of a formal dinner, I ate in the Amaranto Bar where Chef Degiovanni brought out a bounty of food. I think this pasta was the third in a long line of dishes. Although I can’t remember the name of it, I do remember that I ate every last bit. And had I been at home, I probably would have licked the bowl. It was seriously that good.

What Notre Dame is to Catholics, Le Cinq is to turophiles. I kneel at the alter of cheese, and for people like me, there’s no place more holy than Le Cinq. Like the candy cart, there’s also a cheese cart that rolls around the dining room tempting patrons with its delicious stickiness.

I wasn’t in need of much convincing as I tried at least ten different kinds. It’s no surprise that I liked the ones that were the richest, creamiest, and gooiness. Can cheese be described as “gooey”? I think so. 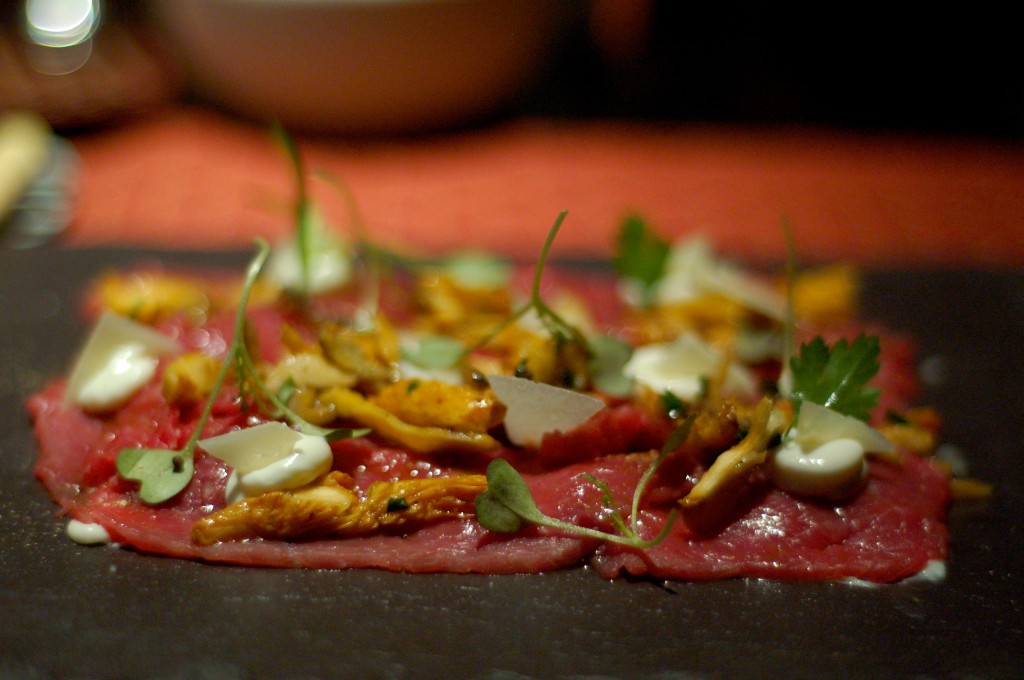 Goodness, London really did a number on me, didn’t it? After a solid month of rich sauces, giant chunks of meat, and eating every shape of pasta one can imagine, this antipasti by Chef Degiovanni was a welcomed change. Light and fresh, this dish was as delicious as it is pretty. A tasty delight, really.

CrottoCrudo‘s Executive Chef, Richard Fuch, created an incredible sampling of appetizers. I certainly enjoyed the yellow fin tuna, salmon and halibut, but what stole my heart was the Mozzabar. It wasn’t really fair to the fish given my enamorment of all-things cheese. I’m especially fond of mozzarella, and Prague has its own bar. Mozzarella di bufala, ciliegine di bufala, and burrata, oh my! I’m sure after a few more visits to this bar I’ll need to enter a twelve-step program.

In Texas we call it cabrito, but in Geneva it’s kid goat. No matter how you refer to it, Chef Saverio Sbaragli of Il Lago, knows how to cook a tender goat. Made with Italian spices, this dish was like no other goat I’ve eaten. From the tasting menu I actually ordered the sea bass, but seeing the look on my face when I laid eyes on the goat, Chef Sbaragli sent out an additional serving for yours truly. Fork tender, this piece of meat melted in my mouth. If only all goat tasted like this and all chefs looked like Saverio.

One can only hope.

I am putting the Four Seasons Milan on notice. They are responsible for my affair with the rare white truffle. Falling in love with white truffles is as dangerous {and expensive} as loving red diamonds. At about $2,000 a pound, white truffles are only found in one part of Italy and available a few of months out of the year. If that’s not enough, there’s a particular pig that is responsible for finding them. Isn’t that special?

I was fortunate for my visit to coincide with Milan’s barolo and white truffle dinner. This, too, deserves its own post. I will say that each of the seven courses included white truffles and all were plate-licking good. I particularly loved the risotto with pumpkin flowers, shallots, Parmesan cream cheese, and Alba white truffles.

You can’t undo what you’ve already done, Four Seasons Milan. I’ll see you in November when I’ll expect a white truffle on my pillow.

Let me give you a tip: When going to the Four Seasons Florence, don’t tell Executive Chef Vito Mollica to just bring you whatever he wants to make. He’ll take you seriously and cook up the entire contents of his kitchen. You’ll end up in a food coma and happily miserable. Well-deserving of its one Michelin star, Il Palagio, is impressive, but one course stood out from the rest: cavatello pasta with prawns and calamari in cream. So simple yet so delicious.  What can I say? I’m a sucker for squid.

I’d like to amend that by saying, “Milk-fed lamb shoulder from the Aveyron region at Le Cinq in Paris is always a good idea.” Cooked for 17 hours in crazy-good spices, this lamb serves two extremely hungry people.

When ordering the lamb, don’t expect a plate to be simply brought to your table. No, this is the two-stared Michelin restaurant, Le Cinq. There’s nothing ordinary here. In fact, seeing the whole table carving of the lamb, decorating of the plate, and spooning of the au jus is akin to watching live theater.

I’m a huge lamb fan and thought I’d found the best in New Zealand. I stand corrected. Who needs mint sauce when you have a piece of meat this tasty sitting in front of you? Although delicious, I felt sorry for the Moroccan vegetable tagine. How can these humble vegetables compete? In short: They can’t. The milk-fed lamb shoulder from the Aveyron region is the star of this show and everything else is simply playing a supporting role.

Quite frankly, I’m not certain as to how I was able to narrow this list down to ten, much less rank the dishes. The food alone is delicious enough for me to return, but the service and company at dinner are what made these experiences so memorable. And speaking of memory, I haven’t forgotten you, Four Seasons Milan. I wasn’t kidding about that white truffle on my pillow.
Next up? My favorite Four Seasons cocktails…and I thought choosing the food was difficult.

I was an invited guest of the Four Seasons, but in no way was I swayed to write a positive review by their little stools for my purse, fingerprint-free flatware, or attentive staff. As always, the opinions are mine.