It’s no secret that I’m a big fan of Austria. Whether summer, spring, fall, or winter, Austria calls to me like few other places. Tiroler Bauerngröstl, Gemischter Satz, and, of course, the schnapps, never disappoint. Austrians are a welcoming bunch, and whenever I get the chance to visit Austria, there’s never a moment’s hesitation.

In September, I returned to Tyrol for the third time. Located in the eastern part of Austria and nestled in between Switzerland, Italy, and Germany, Tyrol is a personal favorite. In fact, I recommended it as an inspiring place to visit for 2016. This mountainous playground is Austria’s third-largest province and a nature-lovers’ dream. With 88% of its territory covered in mountains, Tyrol easily charms high-altitude enthusiasts. There are approximately 600 mountains over 9,800 feet high, creating endless opportunities for pulse-raising Alpine adventures. 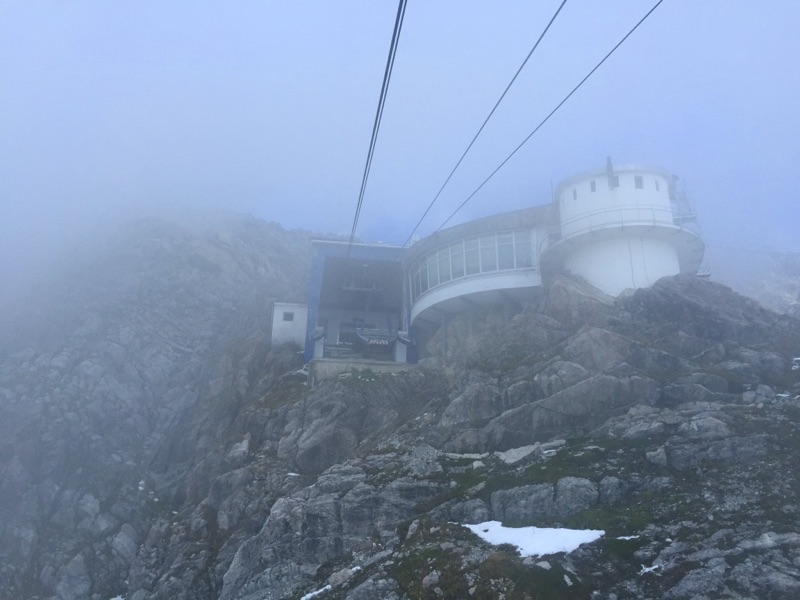 Lucky me, I revisited possibly my favorite ski destination, St Anton am Arlberg. On this trip, I saw the landscape without its pristine powder blanket, and it’s just as spectacular in the fall. No matter the season, the trek to the Valluga observation platform is worth the multiple cable car rides, even for someone who has a fear of heights {ME!}. 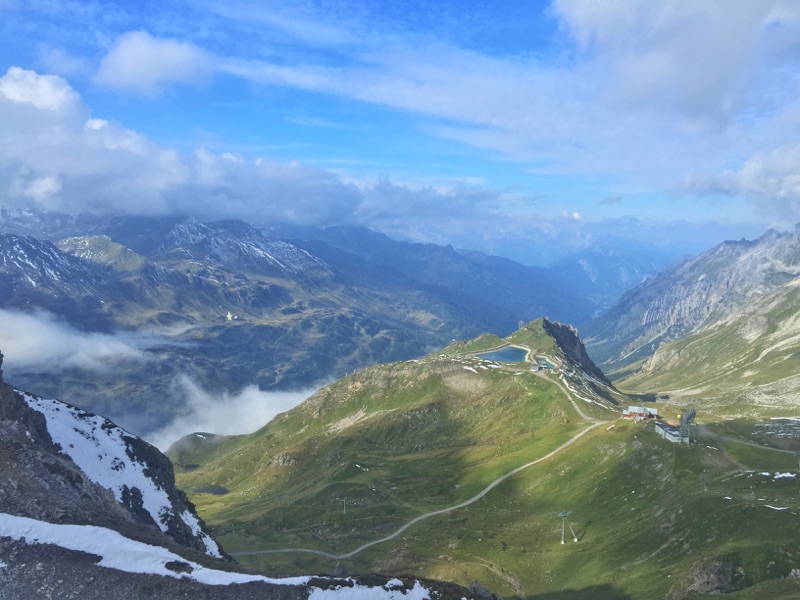 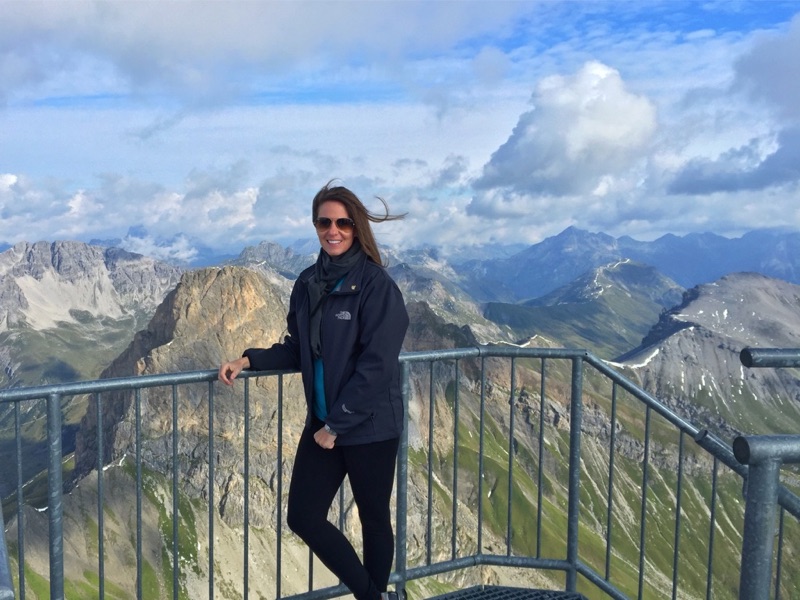 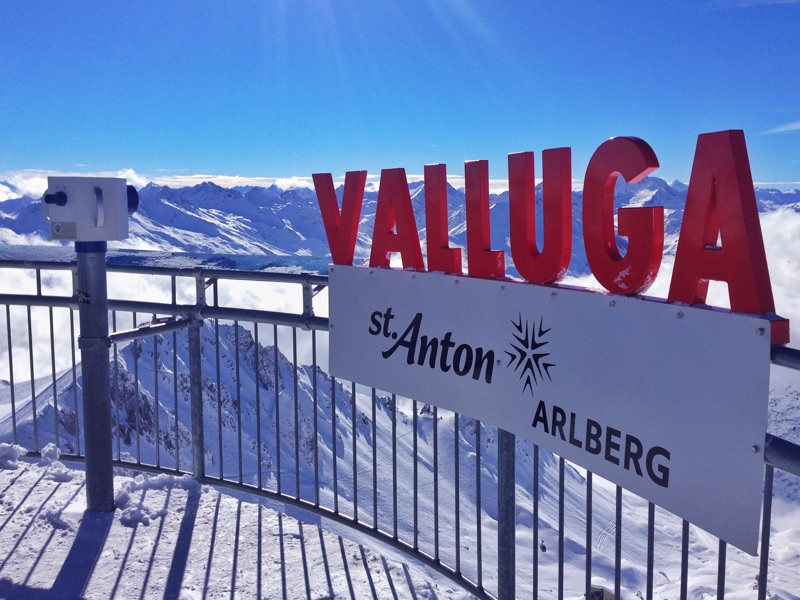 From the observation deck on a bluebird day, you can see five countries: Austria, Italy, Germany, Switzerland, and Liechtenstein. With peaks averaging 3,000 meters, take in views of the Lechtal and Allgäu Alps, Verwall and Silvretta Ranges, as well as the Ötztal and Stubai Alps. If you dare, hire a professional guide and ski down. For those who value their lives {ME!}, simply retrace your tracks down the mountain, while taking in the extraordinary views. 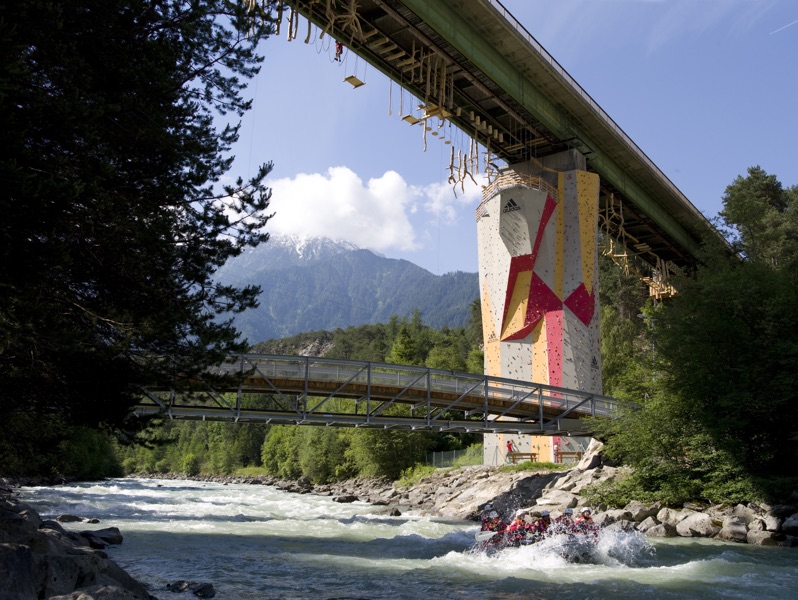 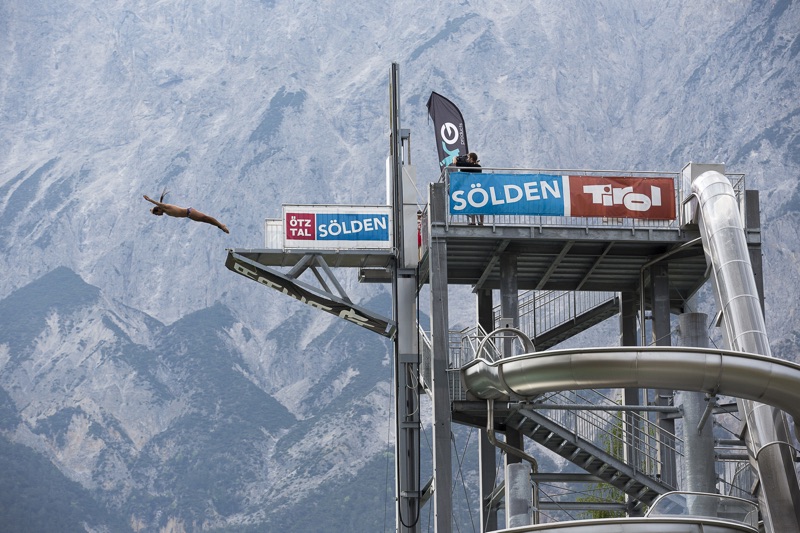 Rafting, canyoning, caving and river surfing, which I can’t even fathom, are all available, too. Exceptional indoor and outdoor courses draw motocross and ATV enthusiasts, while climbing walls, the highest ropes course in Austria, and a mega swing attracts those looking for a heart-pounding experience. 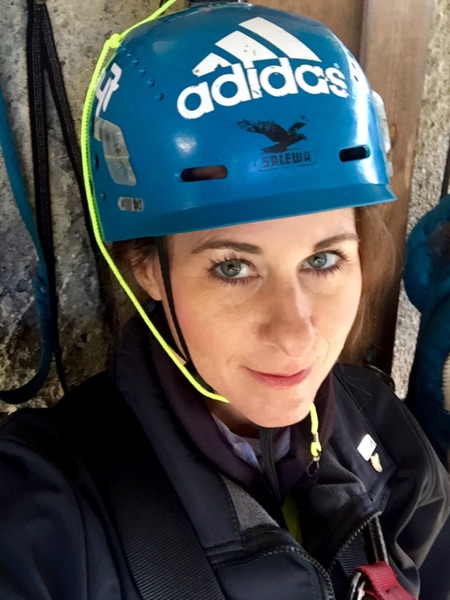 Despite my paralyzing fear of heights, I elected to try the flying fox. Stepping off the platform, attached by a harness to a cable, and zipping 320 meters over the water park and raging river, before crashing into a wall of tires, was the least terrifying part of my time at Area 47. In fact, it was the trek to get to the flying fox platform that disturbed my sleep for days. 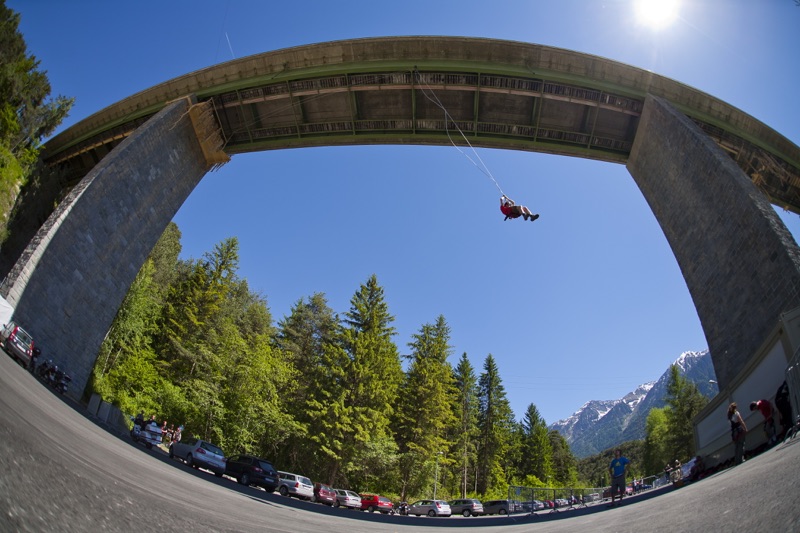 Suspended from a bridge 27 meters in the air, I walked across a 35 cm board followed by a 10 cm board that snaked around a concrete bridge pillar. There was nothing below me but the waiting ground. I was attached to one cable to my left, but had nothing stable to steady my balance. One foot in front of the other, with my eyes avoiding the abyss below, the short trip felt like I was walking the Green Mile. Terrifying and fun, I was never so happy to have my feet back on earth. 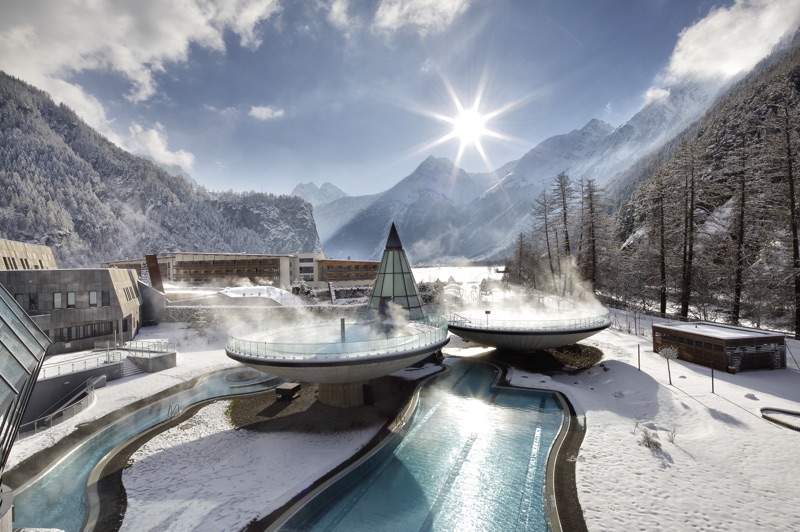 It doesn’t sound quite right that a spa would raise a pulse. In fact, spas are designed to relax and rejuvenate. However, for this prudish American, the Austrian spa culture leaves me anxious, but more on that later.

Located in Längenfeld, in the center of the Ötztal Valley, the Aqua Dome spa resort covers 50,000-square meters. With a four-star superior hotel and dining options, Aqua Dome’s draw is the wellness amenities. Under the Ursprung Thermal Dome are two indoor pools filled with thermal spring water from over 6,000 feet below the surface at a temperature of 93°F and 97°F. In the shadows of the glorious Alps is the Talfrische Outdoor Spa. Each of the three floating thermal spa pools is unique. For instance, the sole basin has a 5% salt content and features underwater music and light effects. I could go from pool to pool until every inch of my skin is puckered, especially after a day of skiing or hiking. 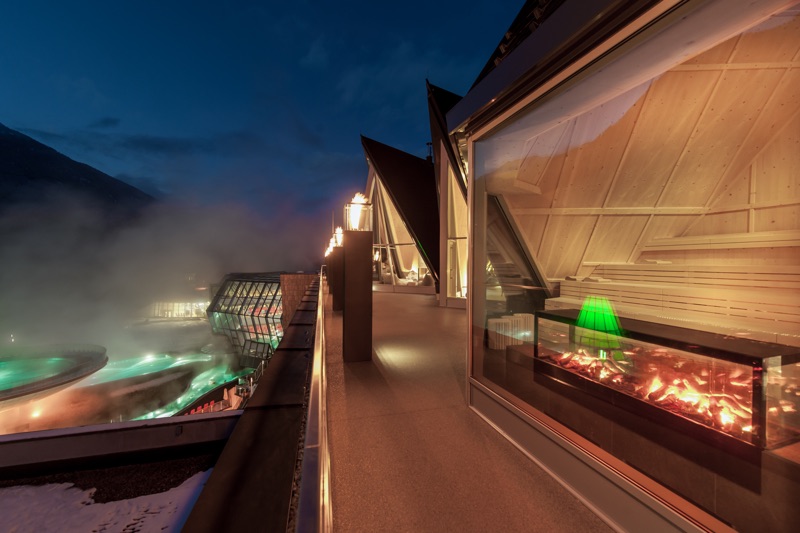 So, what’s so pulse raising about the Aqua Spa? One word: NAKED. Make no mistake; in the areas I’ve mentioned, people are wearing bathing suits. Children swim beside grandfathers, and it’s family friendly. However, take a walk through the psychedelic, crystal-filled corridor to the Gletscherglühen Sauna World and all of that changes.

I’ve been in Austrian spas before, but none of this size. I’m fully aware of the country’s naked spa culture, but wasn’t prepared for the magnitude of nudity in the Aqua Dome. Despite my prudishness, I embraced the When in Rome philosophy and dropped my robe. Well, at least in the actual saunas. Strolling around the massive complex sans terrycloth just wasn’t going to happen. 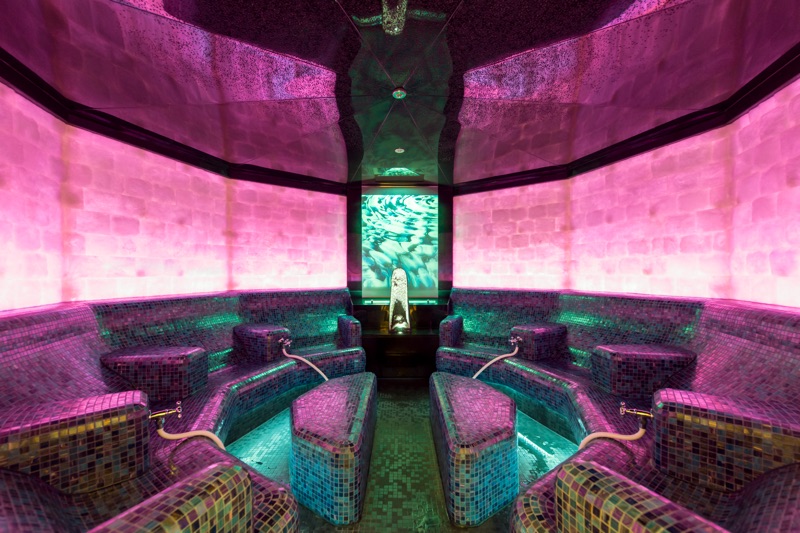 The series of wet and dry saunas with varying temperatures and themes somewhat made me forget that complete strangers were seeing me naked. I particularly liked the Heustadlsauna. This dry sauna is designed to look like a Tyrolean barn and remains at a steady 158°F. In the middle of the room sits a trough filled with hay, which releases essential oils. Outdoor facilities include a heated pool, plunge pool, Kneipp Bath, waterfall shower, and an ice cave, all to be enjoyed sans clothes. 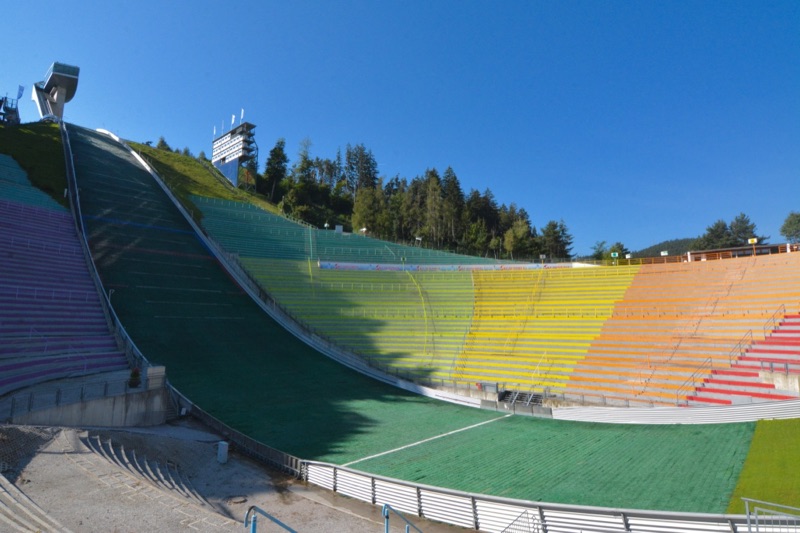 Built for the 1964 Winter Olympics in Innsbruck, the Bergisel Olympic Ski Jump also welcomed Olympians in 1976. Still used for competitions, as well as a practice facility, the stadium is really something to see, not only for a ski jumping experience, but also for the sweeping view over Innsbruck. 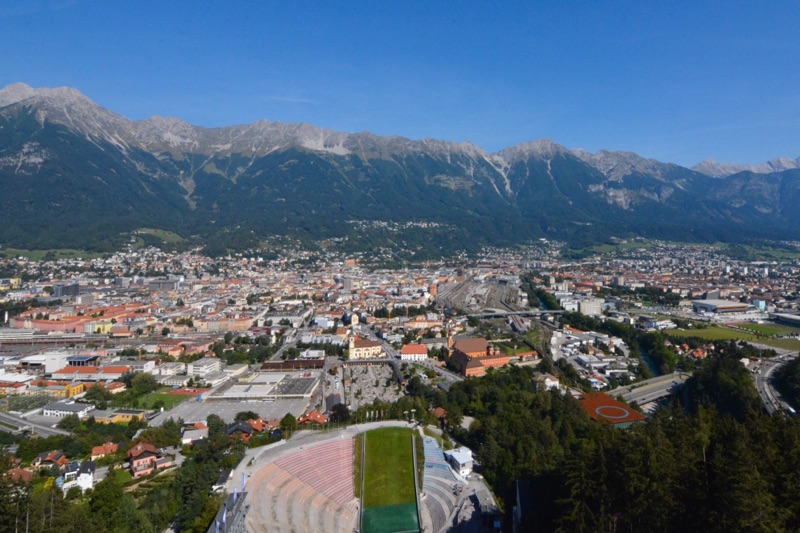 Take the inclined elevator 250 meters above Innsbruck, where the Bergisel Sky panorama restaurant is located. Take in the 360-degree view of the city, before stepping out on the observation deck that sits above the starting point for jumpers. 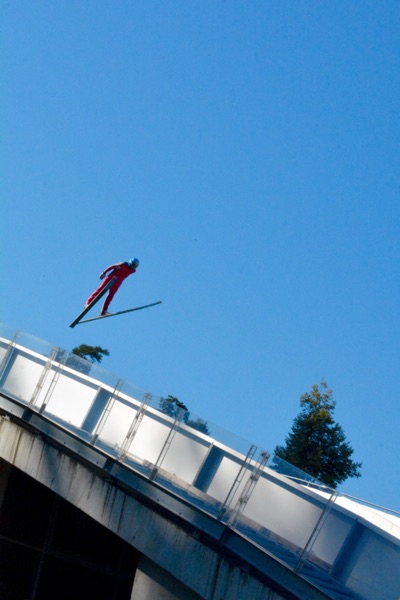 Imagine flying down the steep ramp with massive skis strapped to your feet, before being launched into the air so high that it seems as if you’ll never find the earth. Pay no attention to the cemetery that is situated just outside of the stadium. And if you’re lucky, you might just see want-to-be Olympians training during the off-season. I promise, it’s a sight to behold. 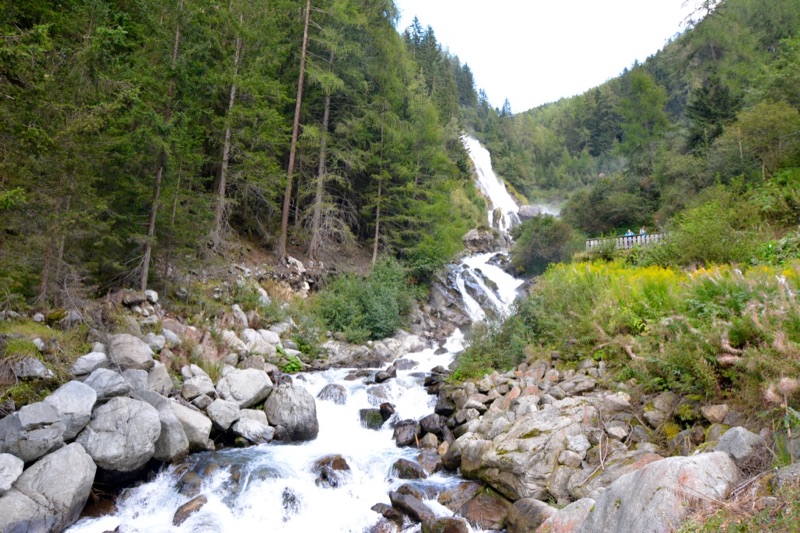 Tyrol’s highest waterfall is found in Umhausen, Ötztal Valley. Originating from Horlachbach Creek, Stuibenfalls was created nearly 9,000 years ago, after a rockslide altered the direction of the creek. Seven springs from the Stubai Alps pour into the waterfall, which can flow up to 2,000 liters of water per second. 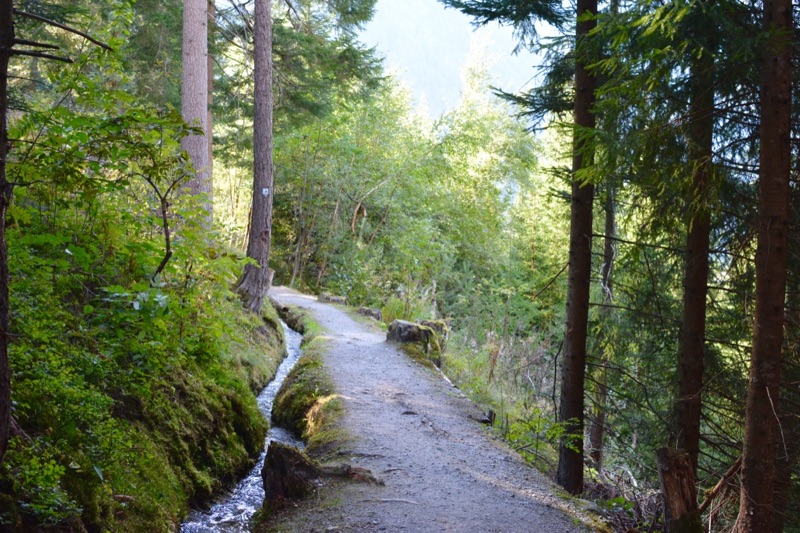 The roar and power of the water is exhilarating, but doesn’t exactly get your pulse racing. Rather, it’s the hike to the Stuiben waterfall that does the trick. From the Ötzidorf parking lot, the 30-minute ‘walk’ to the falls is on a well-manicured trail. Leisurely at first, the path meanders through a beautiful wooded stretch, which opens up to a picturesque valley. About ten-minutes in, the trail gets strenuous, at least for those who don’t regularly exercise {ME!}. The last twenty minutes of the hike are essentially at a 45-degree angle. 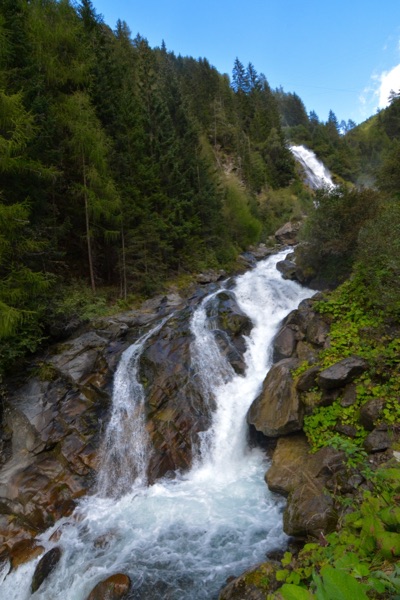 Given the higher altitude, steepness, and my out-of-shape body, I found the hike challenging. However, the sight at the top was worth my burning lungs. For those with energy to spare, there are several higher platforms that offer various views of the falls.

I was a guest of the Austria Tourism and Tyrol Tourism boards. In no way was I swayed to write a positive review based on the awesome Alpine vistas, the scrumptious schnapps, or the heart attack inducing activities. As always, opinions are mine.