The Rio Samba Parade isn’t your run-of-the-mill Carnival celebration. Although, it did begin as a festival with people singing and dancing through the streets. Despite Carnival’s humble roots, these parades morphed into a spectacular, over-the-top competition between samba schools, which are social clubs within neighborhoods. 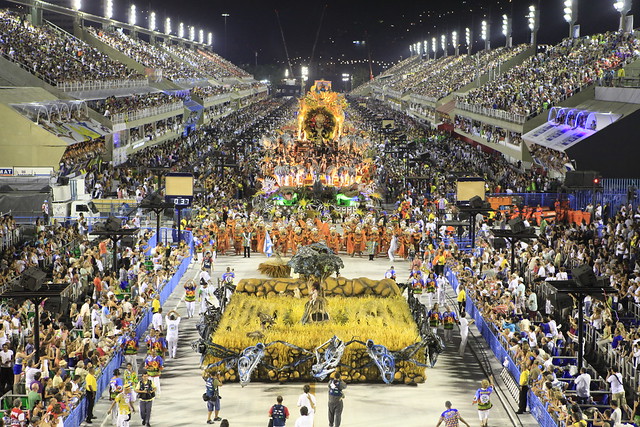 Originally held in downtown Rio, the parades were moved in 1984 to the Sambodromo, a giant, 700 meter long stadium specifically built to hold  70,000+ spectators for Carnival. For two glorious nights, thirteen samba schools bring the Sambordromo alive with their elaborate, grand pageantry. From sundown to sunup during this nationally-televised event, dancing and music consume all in attendance. A champion is announced on Ash Wednesday, and the six best schools are chosen to perform the following Saturday. 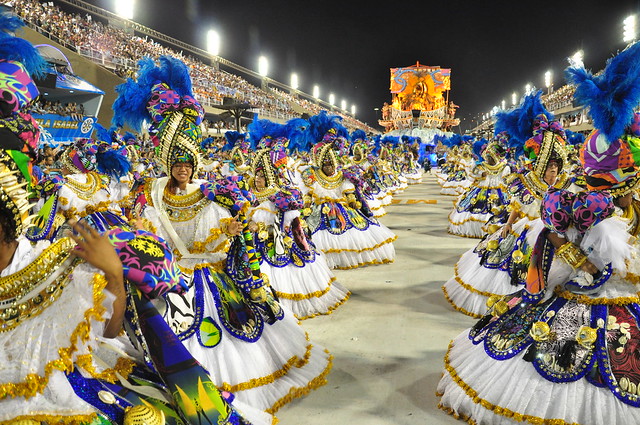 Beyond being a celebration prior to Lent, Rio’s Carnival is also a fierce competition. Schools are judged in ten different categories: allegories and decorations, percussion, opening presentation, overall performance, theme, parade flow, costumes, overall harmony, the performance of the flag bearer and master of ceremony, and the samba song. There are four judges for each category, making forty judges in all. Scores are awarded on a scale of five to ten with ten being the best. Points are deducted if a parade doesn’t last at least 65 minutes or runs over 82 minutes. Samba school themes vary tremendously and are carefully chosen since all the costumes and floats must personify each particular theme. 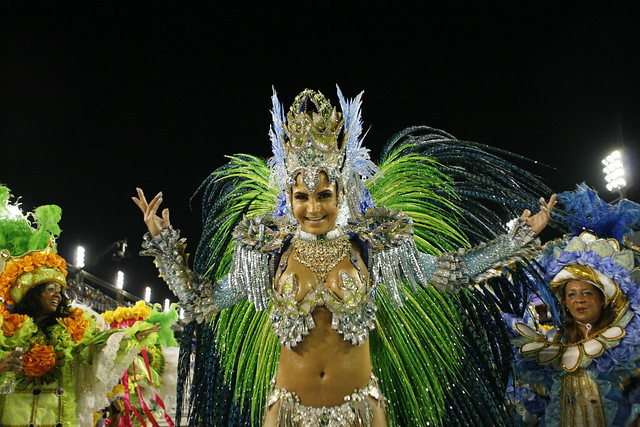 Preparations by the samba schools begin almost immediately after Carnival ends. For each school, a theme is chosen, costumes and floats are designed and produced, and an official song is chosen. Rehearsals start in December, and each samba school’s song is released for radio play and sold in music stores. 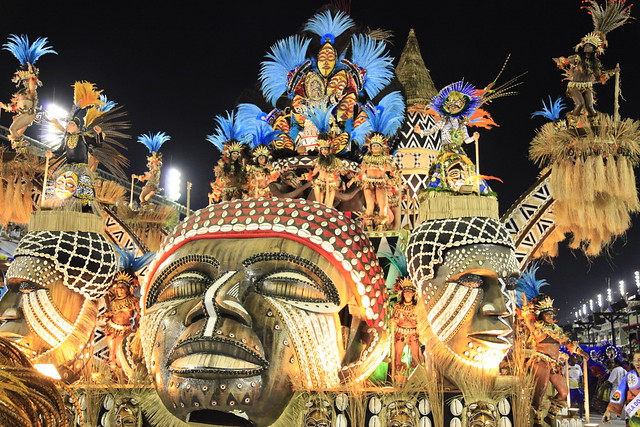 Parades are choreographed and timed to perfection. Even though there are 3,000 to 5,000 paraders in each school, every person is important and has a specific job. For instance, the Flag Carrying Couple dance while presenting the school’s flag. They are elegant and the most elaborately dressed in the parade. Whirling Ladies (Baianas) are a group of at least 80 older women that spin throughout the parade. They’re dressed in full skirts that reflect Bahia roots. 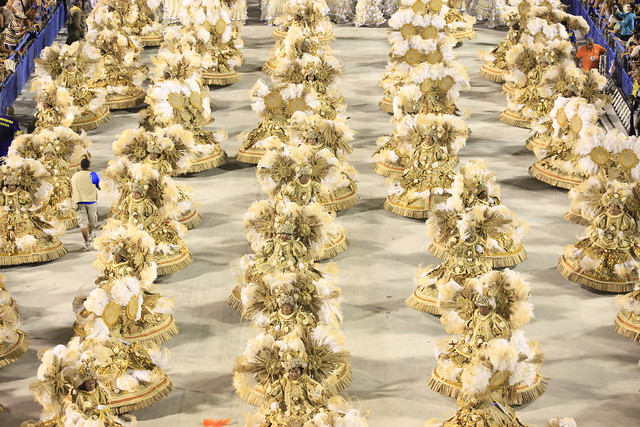 Sections and wings are the bulk of each samba school. Within a section there are several wings. A single wing is made up of 25-100 people wearing the same costume dancing together, and there are at least twenty wings spread out amongst each parade. The Vanguard Group is the opening wing of a parade. This group of at least a dozen dancers serves as an introduction to the school. Another small wing is the Samba Dancers. This is a prestigious group of the best samba dancers in the school. The Percussion Band is comprised of about 300 drummers and is arguably the heart and soul of the school. The gorgeous Queen of the Drummers dances in front of the Percussion Band, introduces the band to the crowd, and inspires the drummers with her beauty. 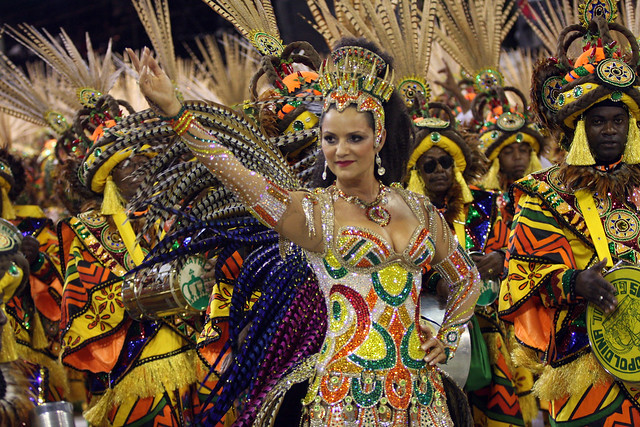 Separating the parade sections are five to eight giant floats that can reach three stories in height. The majority are pushed by men from the school, but some are motorized and often have moving parts. These elaborate floats carry special guests and beautiful samba dancers in extravagant costumes. 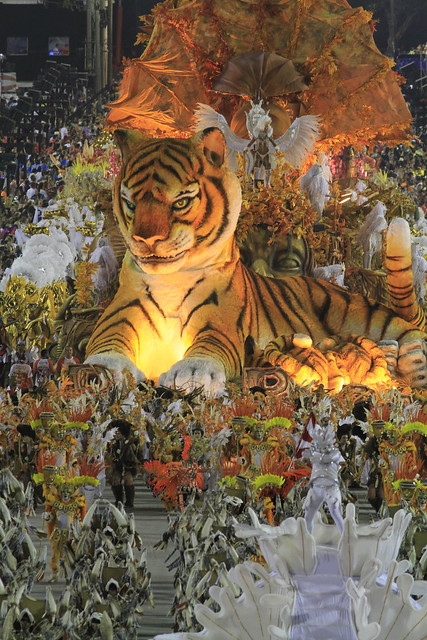 All of the paraders’ costumes are elaborate, outlandish, colorful, and original. Feathers, sequins, mirrors, crystals, and metallic materials are used in the hand-made costumes. A year’s worth of hard work and dedication go into making the most beautiful things imaginable. Sometimes the most outstanding costumes are nothing but paint and glitter. Each samba school has their own official colors that represent their community. These colors are used throughout the parade in both the costumes and the floats. The fanciest and most elaborate costumes are worn by the people riding on the floats, which is a place of honor. 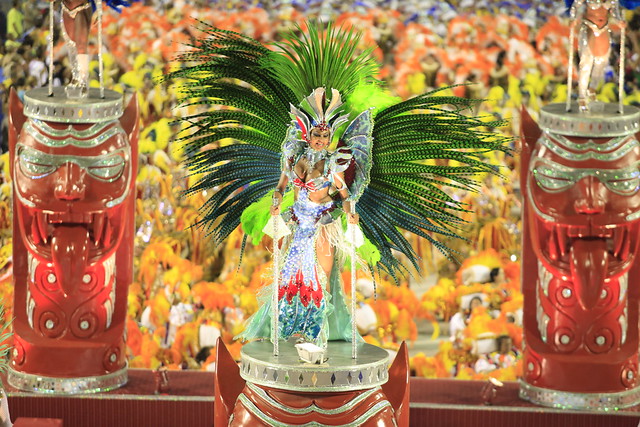 As expected, music is a huge part of the samba parade. Each school selects an original song by way of a contest. The song’s lyrics and beat must represent the theme chosen by the school. For the entirety of the parade, the school’s song is piped in through speakers and sung by paraders and spectators alike. The music is on a loop and played over and over, until the school has completed their parade. 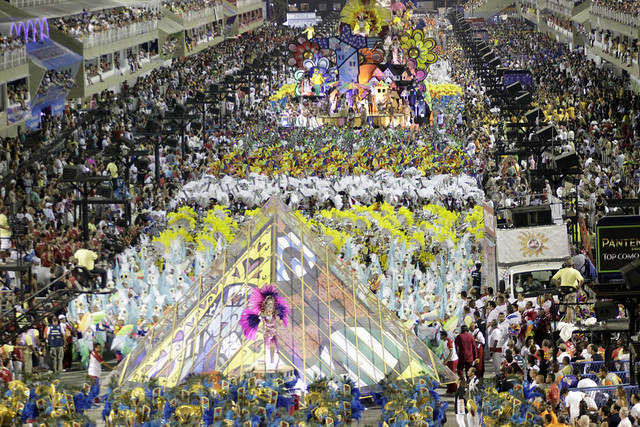 Although there are a large number of tourists attending Carnival, locals make up the majority in attendance. Despite the expensive tickets, Cariocas are willing to pay for the privilege of cheering on their favorite school. The stands are a festive place. Attendees dress in in their favorite school’s colors and wave their flags. Dancing and singing are commonplace, as are looks of elation and joy. Vendors roam the stands bringing Carnival-goers beer, Cokes, water, ice cream, hot dogs, and hamburgers. Nourishment is definitely needed for the nine hour, non-stop dancefest. 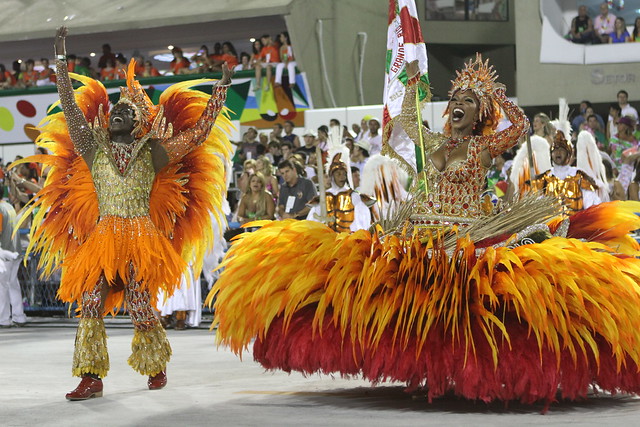 Sitting in the stands is not the only option for visitors. Samba schools also offer the opportunity to participate in the parade. A wing costume can be had for $300 to $1,000 USD, and a float costume can cost as much as $6,000 USD. Don’t worry about not knowing how to samba or even having to practice; being energetic, having fun, and following along are the only requirements. Having the experience of participating in the samba parade is an exhilarating one, but it doesn’t give full access to watch the rest of the parades. After paraders are finished, they must leave the Sambordromo unless they’ve purchased a ticket.

As an observer, it’s easy to get lost in the extravagance and exuberance of Rio’s Carnival parades. They’re over-the-top, flamboyant, and outrageous. But for the communities who pour countless amounts of time, energy, and money into this pre-Lenten celebration, it’s a tremendous source of pride. And for a few days each year, thirteen samba schools capture the attention and ignite the imagination of the world. 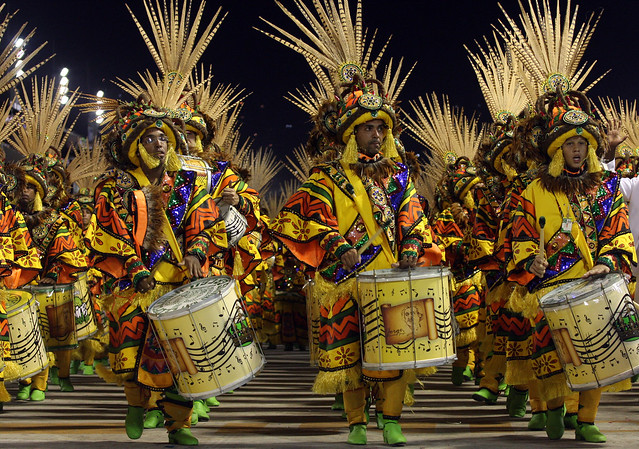 All of these photos were taken at the 2012 Carnival by Ascom Riotur.

This gorgeous video by Jarbas Agnelli and Keith Loutit shows not only the beauty of Rio, but also the opulence of Carnival.