In 2016, I finally stepped foot in Africa, a continent that has long ignited my imagination. And although my Tanzania trip didn’t go off as planned, my time spent in the Serengeti set the bar incredibly high for all other travel experiences. It’s been nearly six months since I’ve returned home to Paris, but my mind still drifts to the Serengeti safari, its sunsets, and the sound of silence. 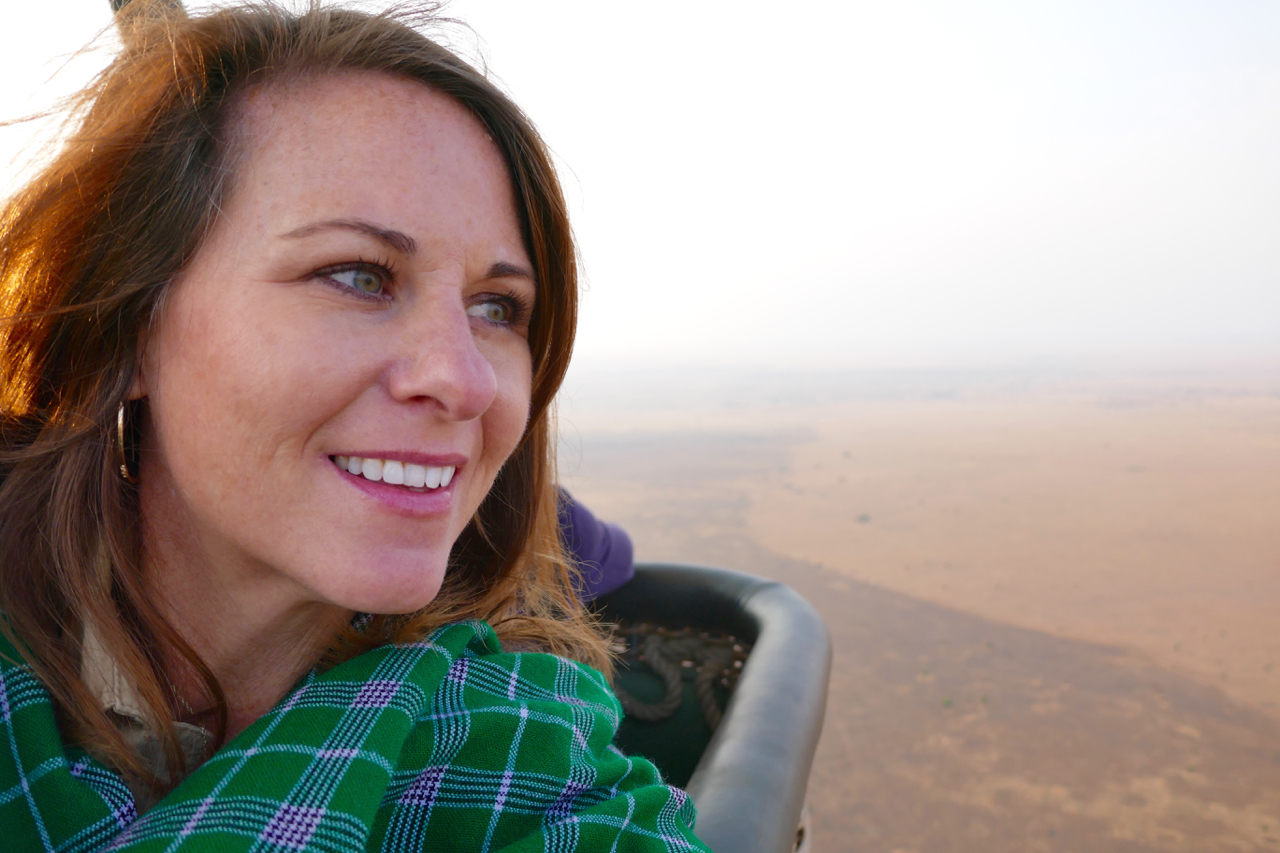 Meaning “endless plains” in the Maasai language, the Serengeti is a mix of savannas, grassy plains and woodlands spanning some 5,700 square miles. As a UNESCO World Heritage site, the oldest park in Tanzania dates to 1951. 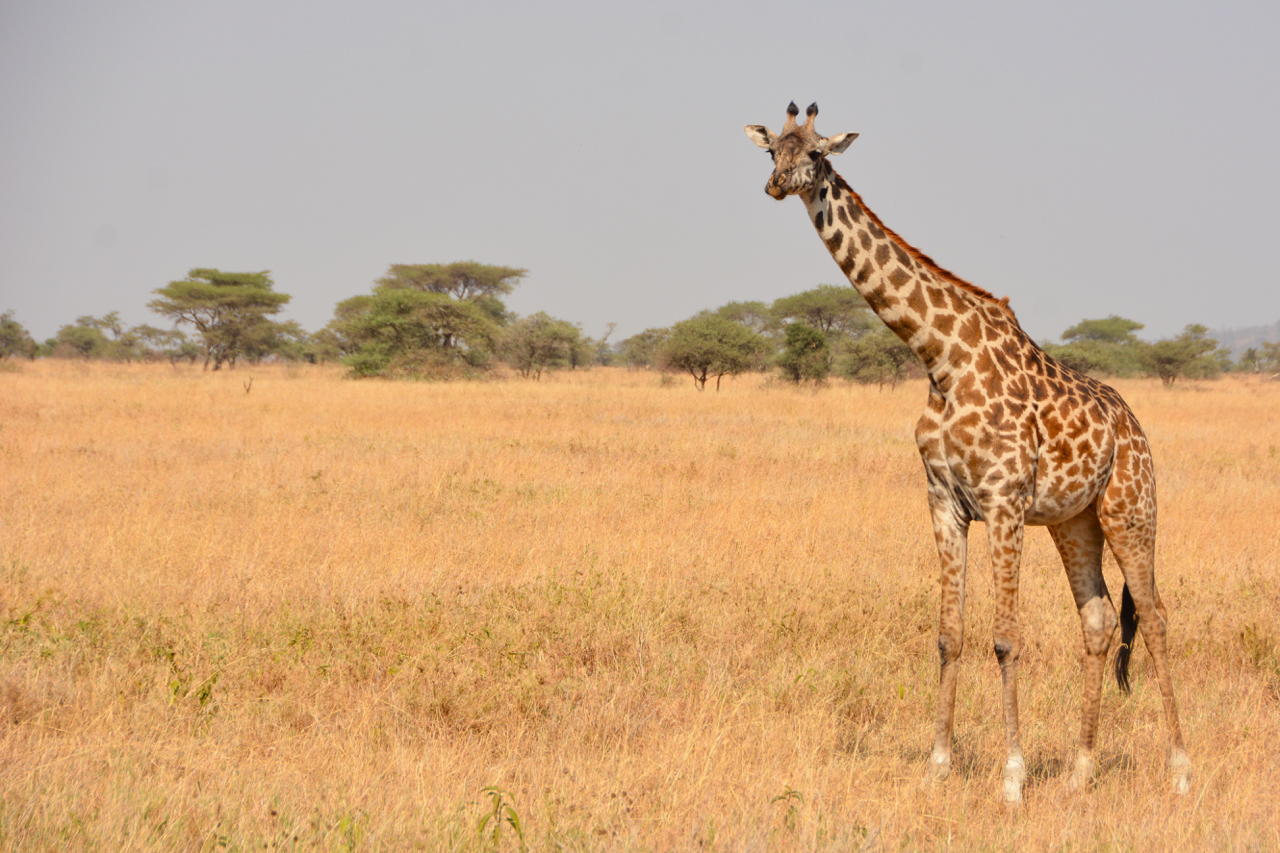 Typical of an equatorial climate, the region has dry and wet seasons. It was August, and I’d arrived during one of the dry periods. From January to March and June to October, the Serengeti is hot, and most of the flora dead or on the verge of it. 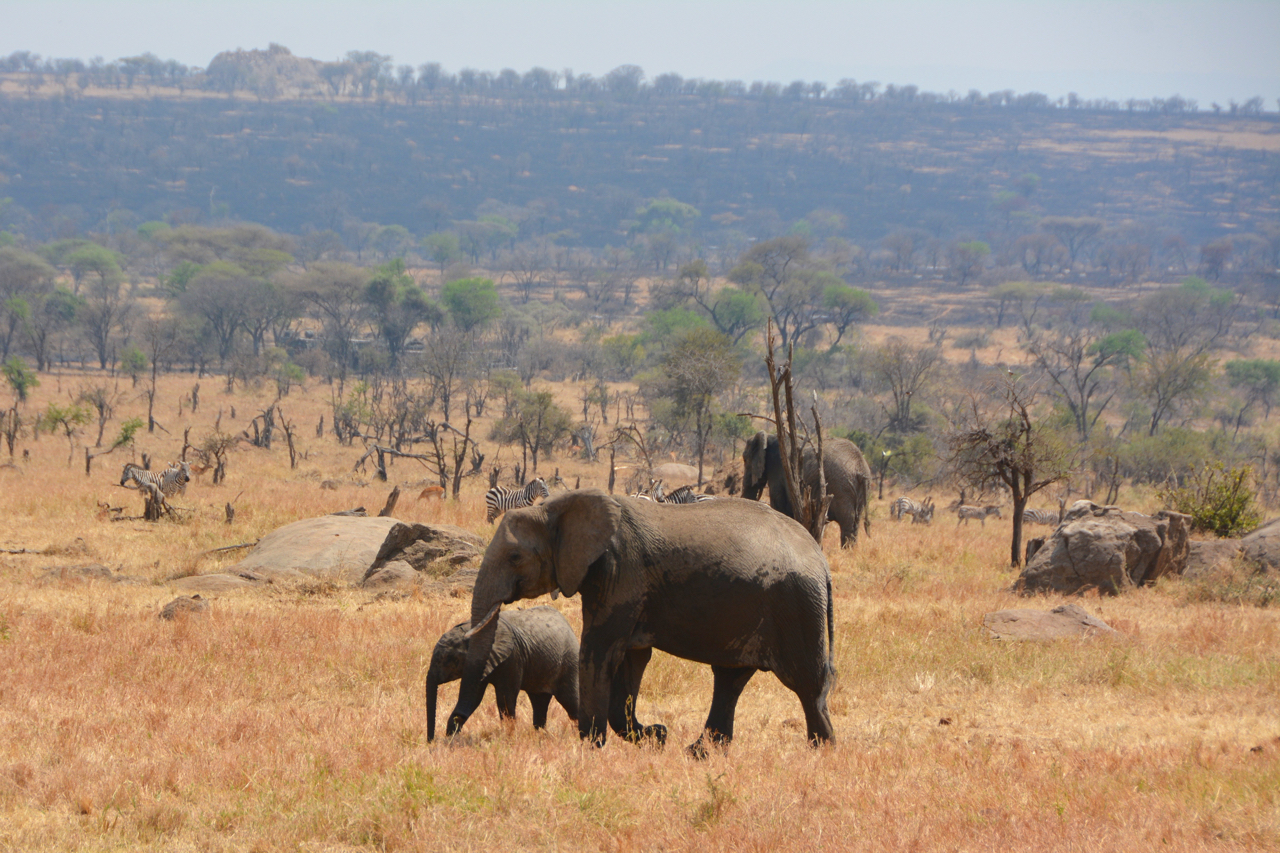 An eerily beautiful scene, controlled burns light up the night’s onyx horizon. Meant to rejuvenate the land and keep the pesky tsetse flies at bay, the side effect of the fires is dust and smoke-filled air. In direct contrast, longer rains fall from March to May and shorter storms occur during October and November. With the rain, come lush, green vistas and happy times for herbivores. 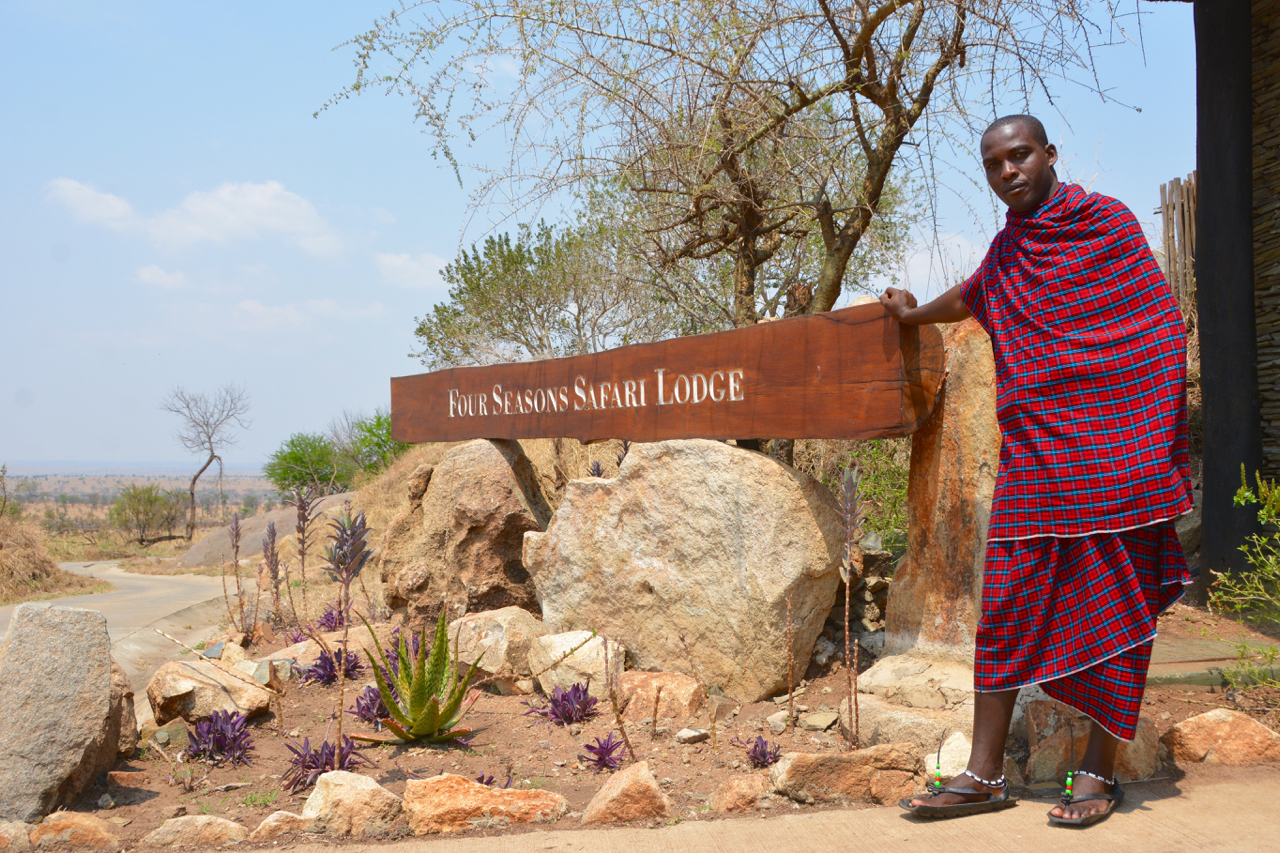 Swathed in red and blue-checkered fabric, I was greeted by Maasai as I arrived to Four Seasons Safari Lodge Serengeti. Holding spears and wearing elaborate beaded bracelets and shoes crafted from motorcycle tires, the Maasai men may have been working at the Lodge, but they hadn’t forgotten their roots. Artful scars and stretched earlobes were permanent reminders of their storied culture. 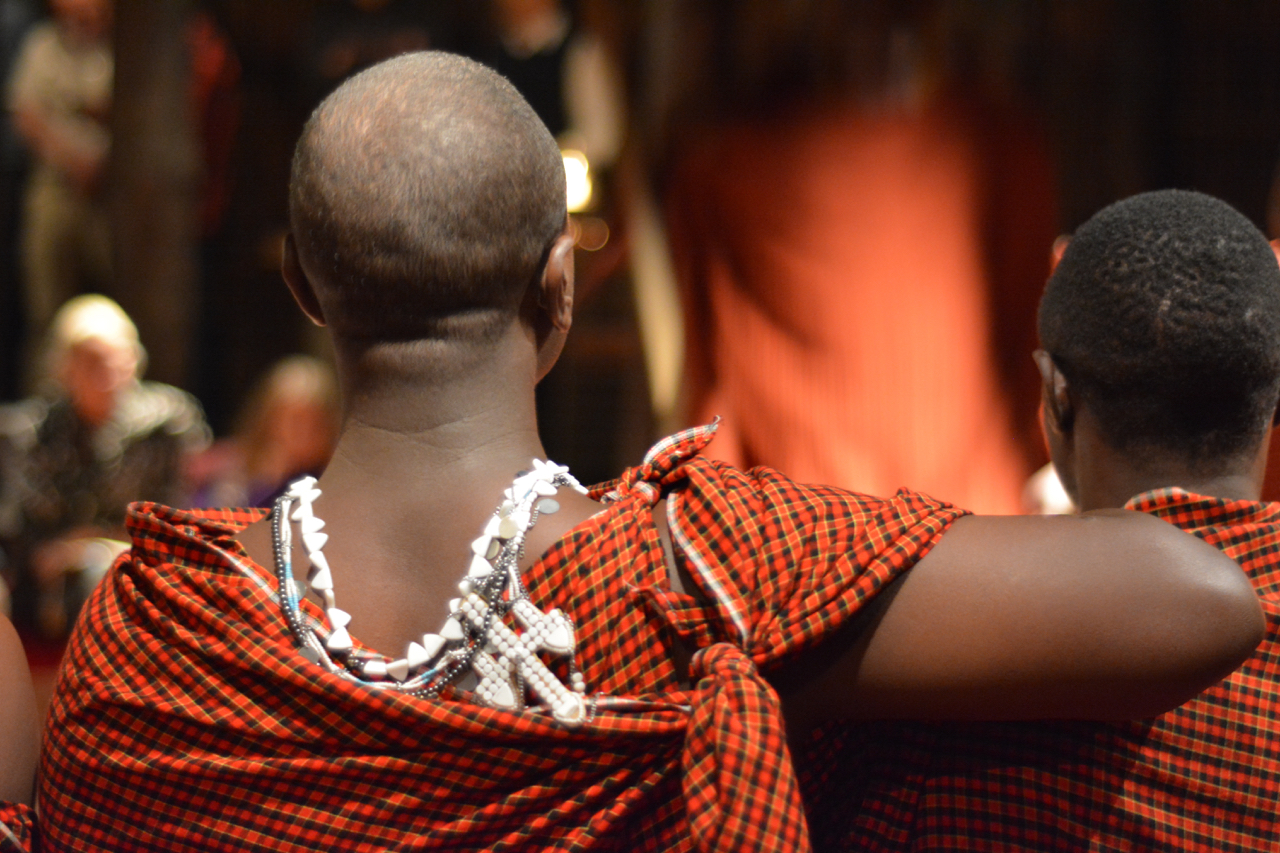 A nomadic tribe originating from Kenya, the Maasai grazed their livestock on the Serengeti until 1959. Due to land and wildlife conflicts with the controlling British, Maasai relocated to the Ngorongoro Conservation Area. Today, approximately one million Maasai call Tanzania and Kenya home. 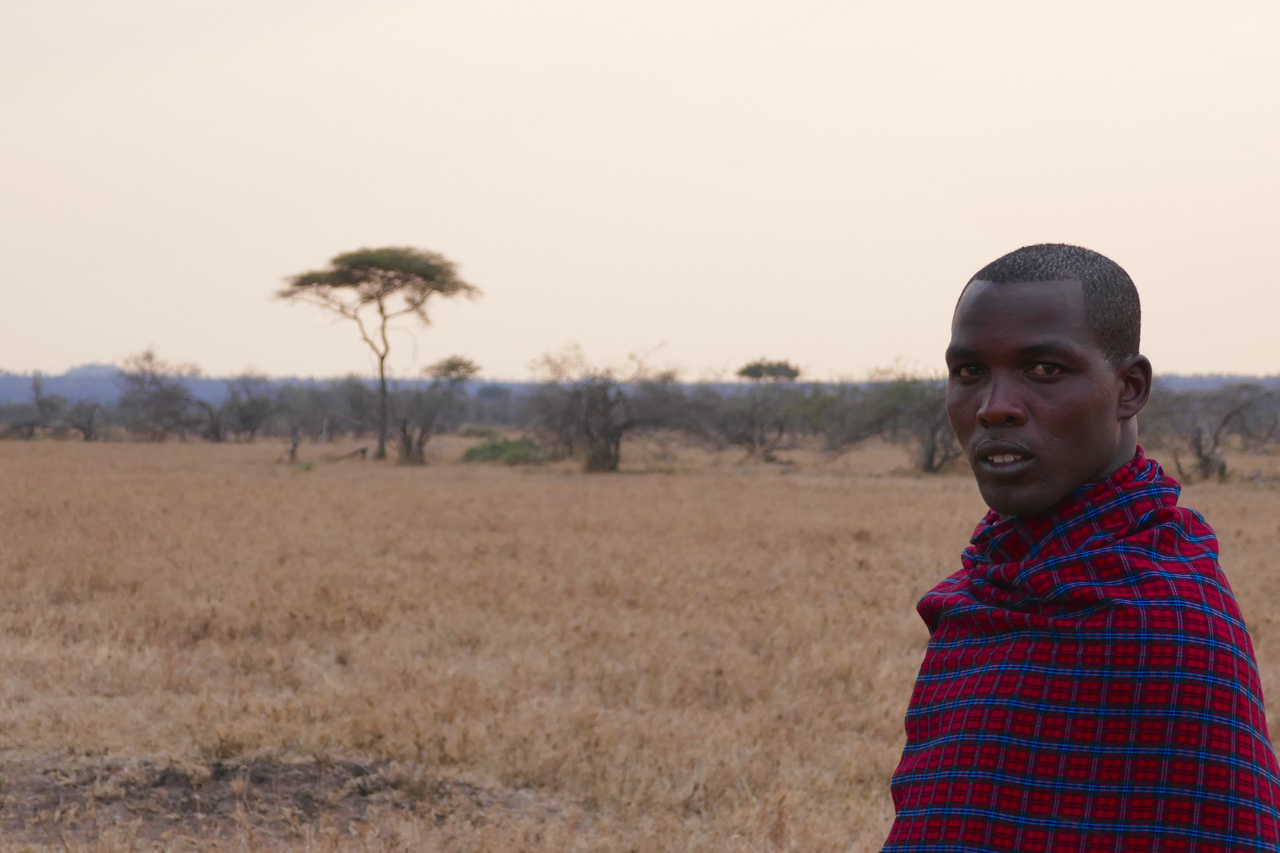 Polygamous, it’s not unusual for men to have multiple wives. However, Maasai men must achieve several feats before marriage, children, and achieving warrior status. Not too long ago, this included lion hunting. Bringing back the tail and claws of a lion elevated the Maasai’s standing in the tribe, proving him brave. Men may rule the home, but it’s the women that maintain it. Maasai women are responsible for cooking, the daily chores, caring for children, and even building boma, which are mud houses. 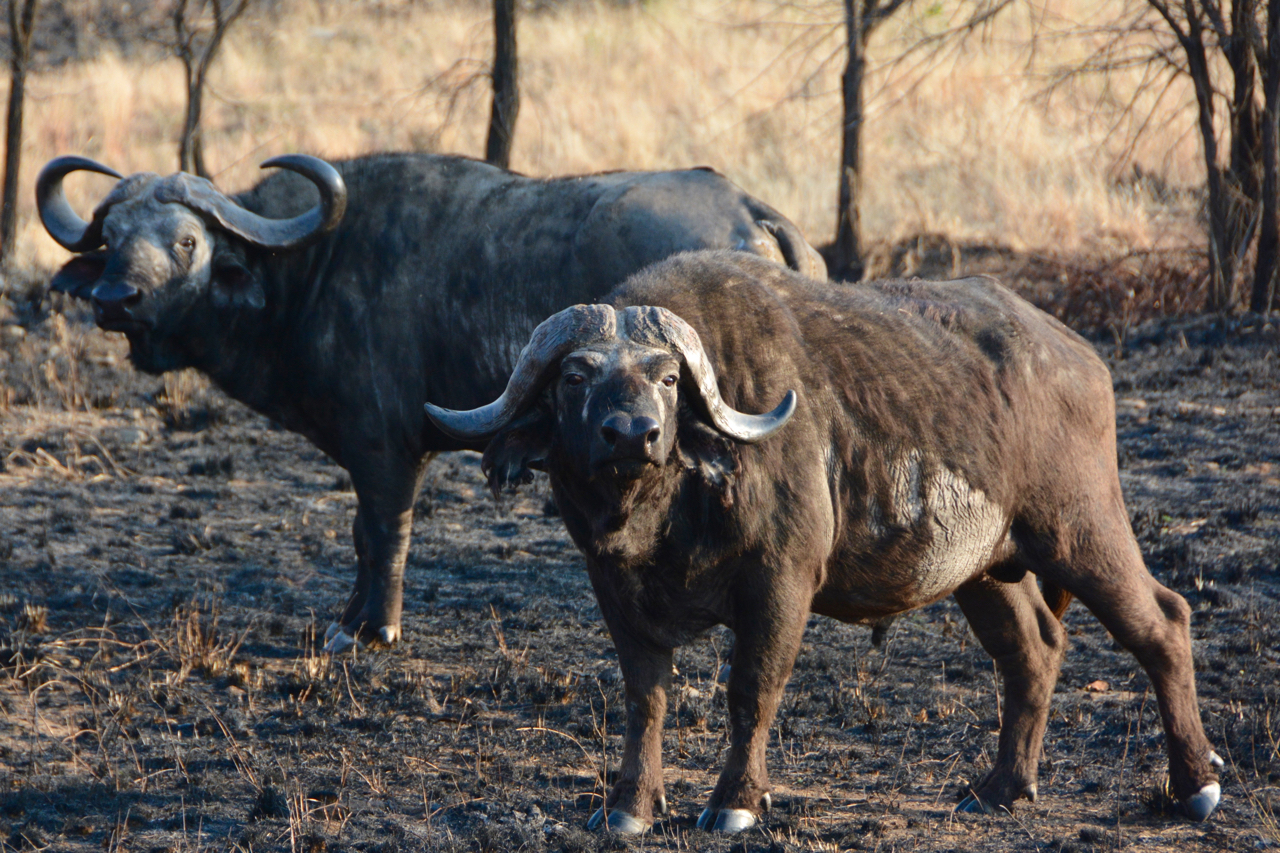 A staggering 2.5 million mammals live in the Park, making it the largest concentration in the world. It’s also home to more than a thousand species of birds and various types of vegetation, including the emblematic flat-top acacia, yellow fever, and sausage trees. From the Big Five {African elephant, black rhinoceros, lion, leopard, and African buffalo} to the Little Five {ant lion, rhino beetle, buffalo weaver, leopard tortoise, and elephant shrew} and every living thing in between, there is synergy within the Serengeti. 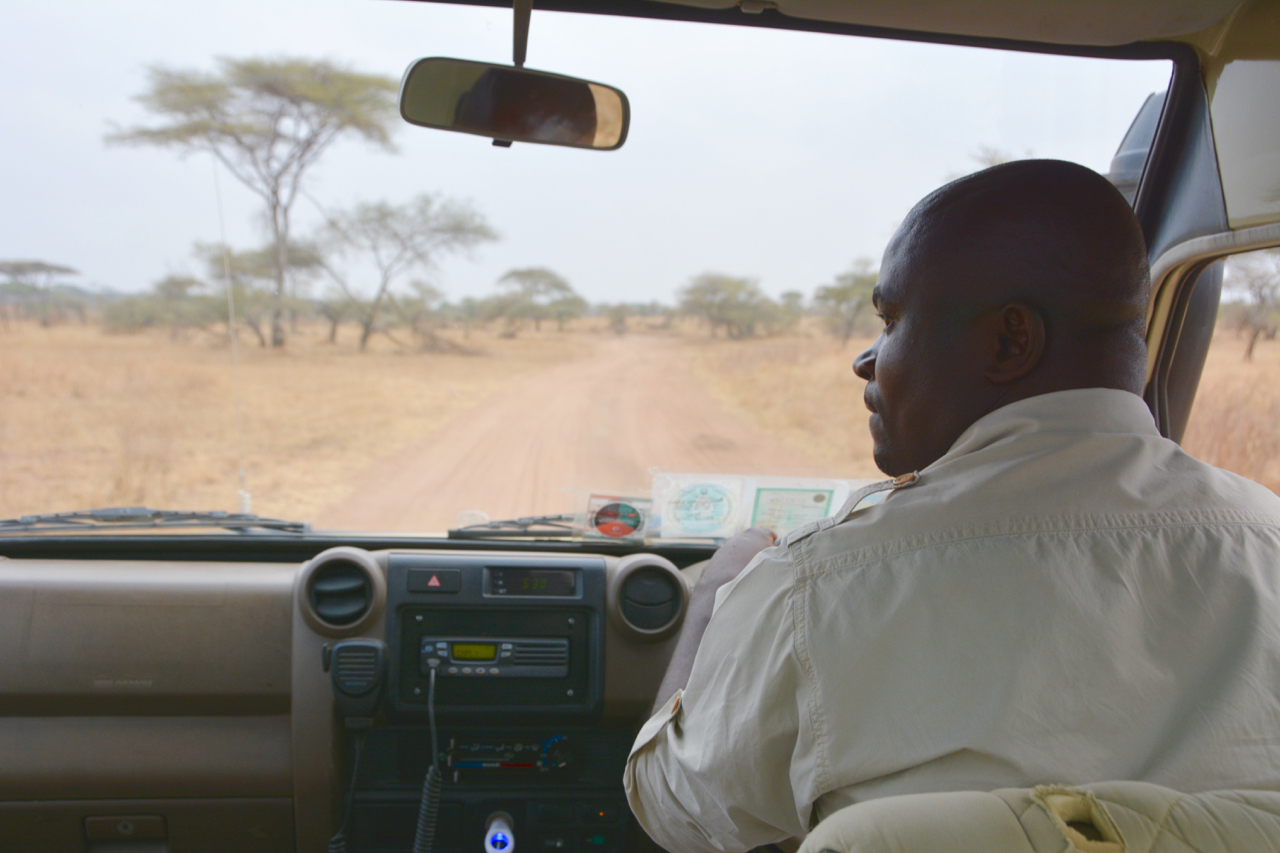 No day is the same in the Park, however animal behavioral patterns are predictable. Word travels fast among guides, and spotting of a cheetah in the brush or a leopard hanging in the tree is a source of pride. Seeking out wildlife is their sport, but rather than riffles, those living and working in the Serengeti use their wits and binoculars to hunt. 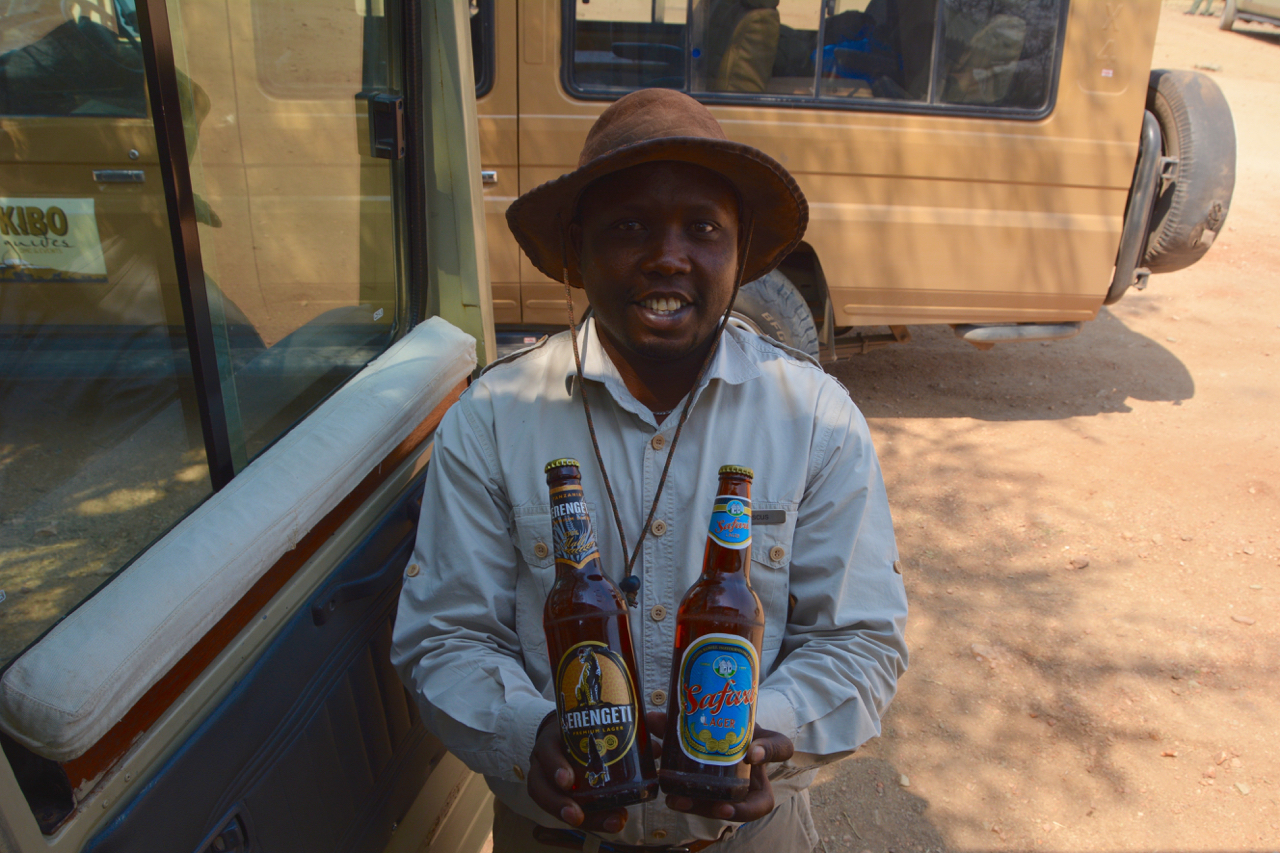 Thanks to the Four Seasons naturalist, Priscus, I’d spotted more wildlife than Noah’s arc could carry by mid-morning. The temperature was rising, which meant many of the animals would find refuge from the scorching sun. In the distance, a pile of tawny Land Cruisers sat motionless–a traffic jam in the Serengeti. Drawing closer, the cause for the bottleneck was clear: a fresh kill. 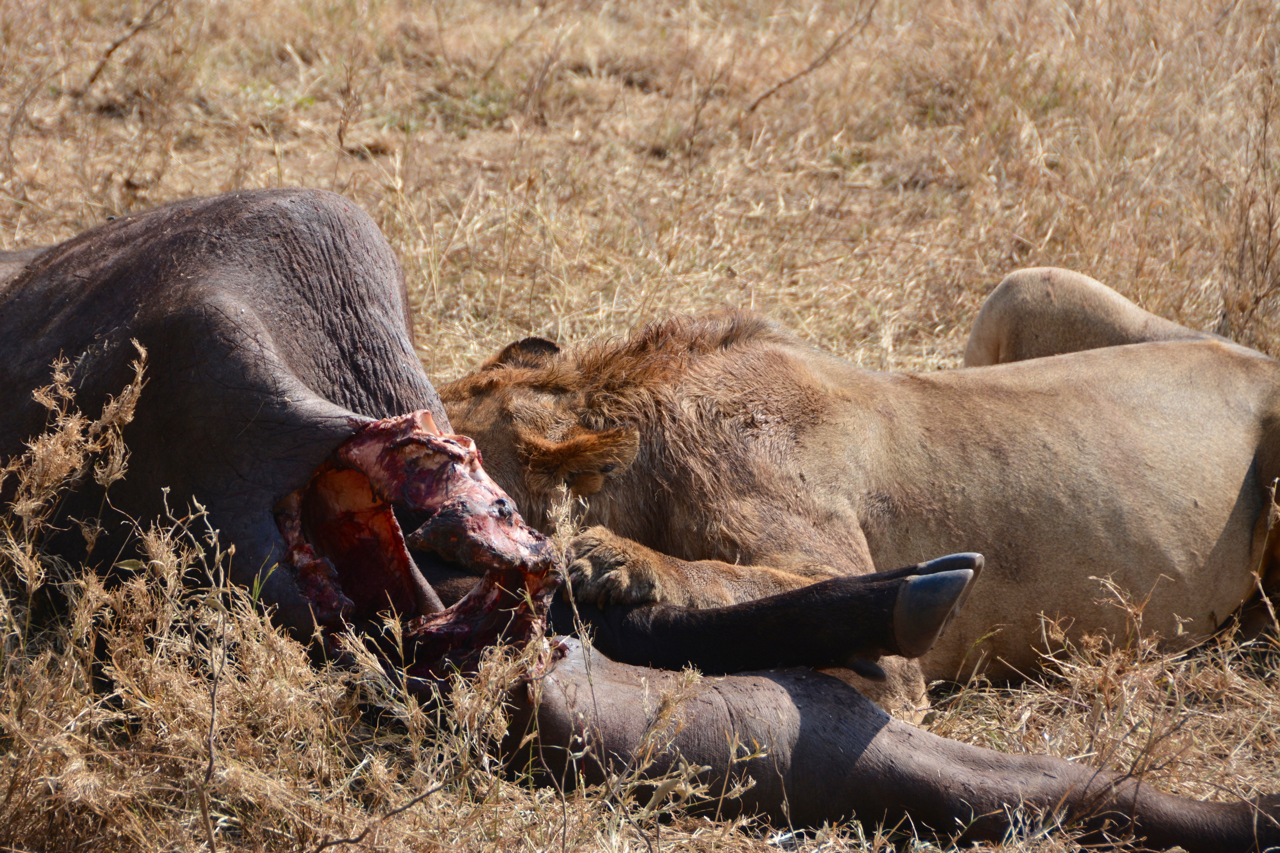 A male lion plunged his entire head into the cavity of the buffalo and gorged himself on the prized parts. There are no bones in the liver, kidneys and intestines, and thus these tasty treats are reserved for the males. Coming out for air, he panted, exposing his bloody, sharp teeth. Searching for a better eating angle, he dug his incisors into the buffalo’s hide, spinning it around as if a toy. 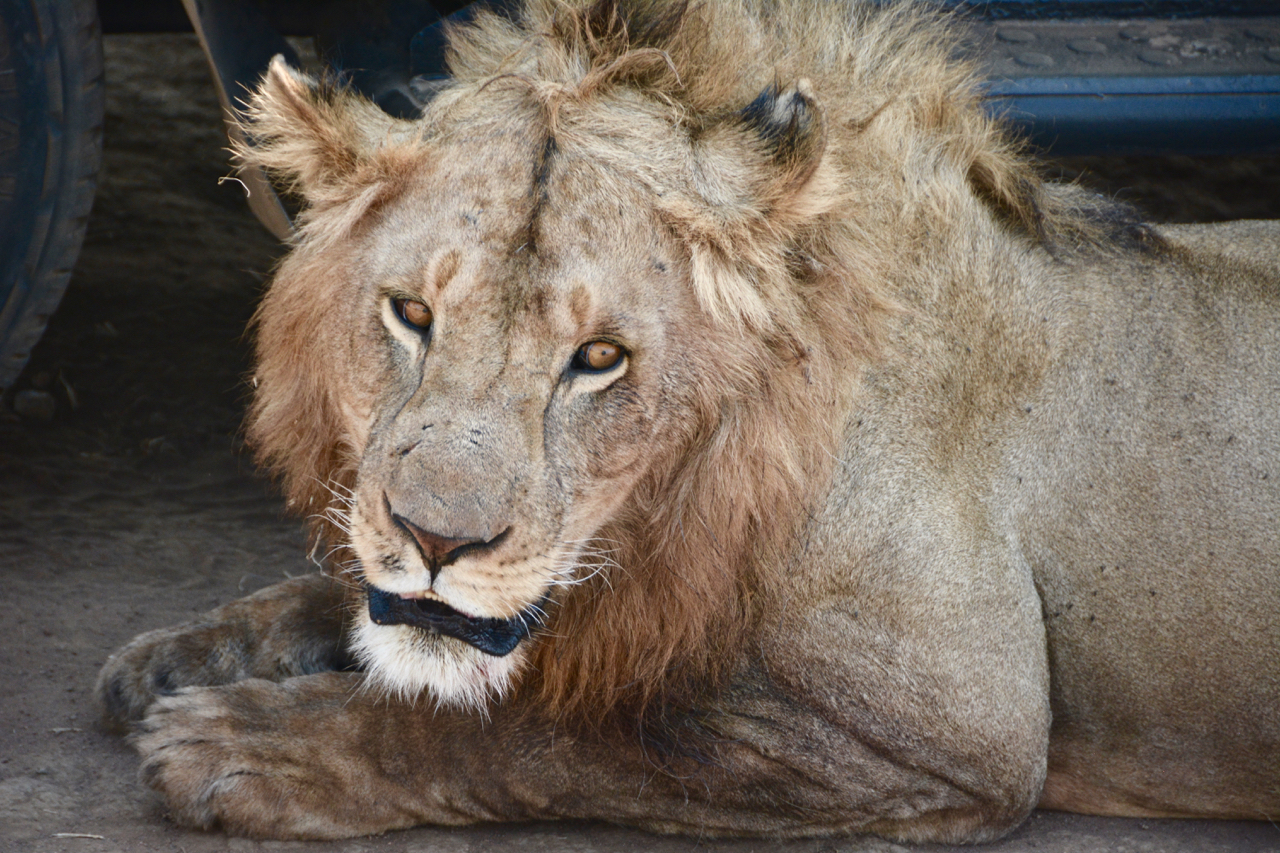 Just ten feet separated me from the rest of the pride. Having already filled their stomachs, a male, two females and a cub sat in the shadow of one of the safari vehicles. Fat, happy and hot, not even an engine turning seemed to faze them. With cameras clicking, the pride showed no fear, only satisfaction. They would remain content, at least until sunset, when their bellies would again grumble.

While others stood at the observation area, Kimambo, my Four Seasons guide, quietly directed me down to the shore of a murky pond. Despite knowing that hippos kill more people than any other African mammal, I stood 20 feet from a bloat of hippos, sending my pulse rate soaring. It was the one time during my half-day safari that I was allowed to get out of the Land Cruiser. Popping my head out through the roof was the closest I’d gotten to being among the animals. 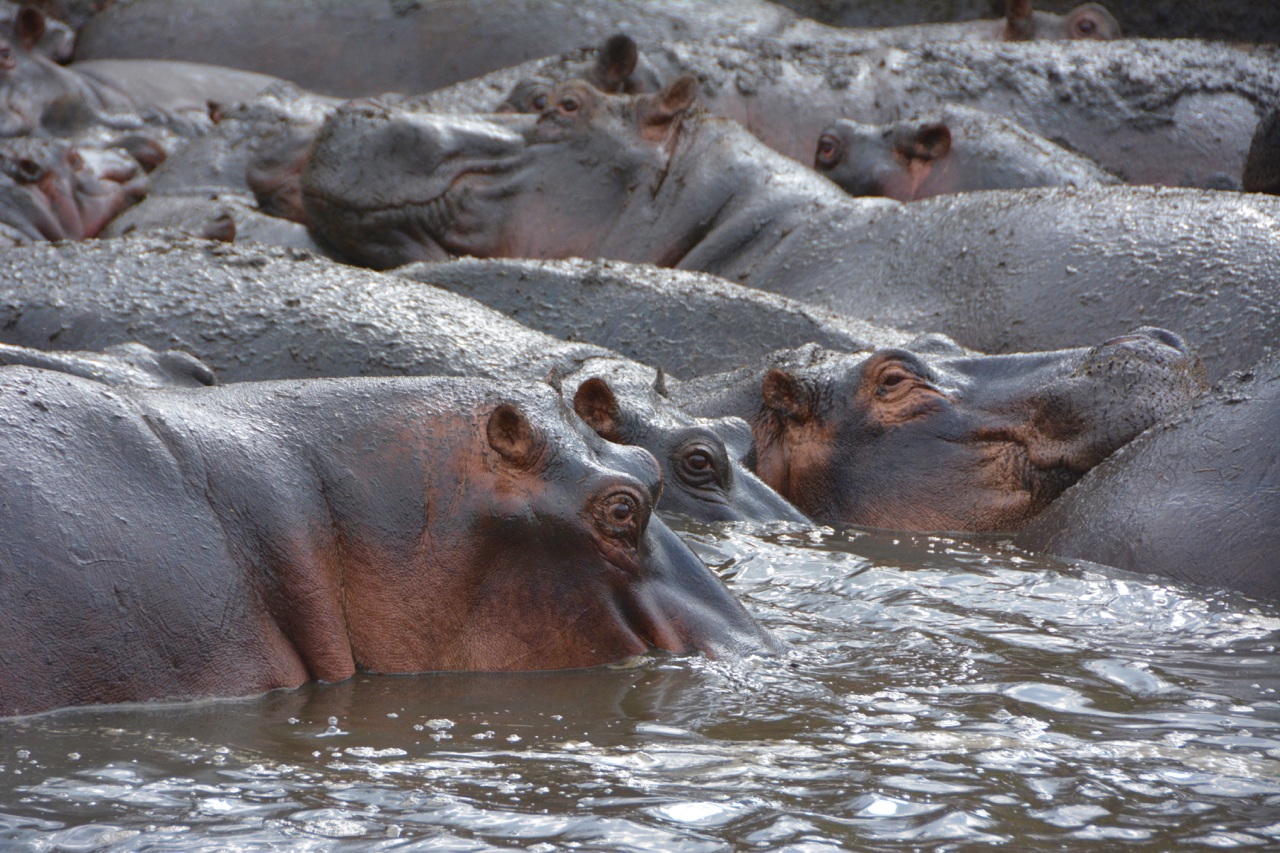 The Retina Hippo Pool, located in the northwest part of the Park, is home to no less than 100 of these ‘river horses.’ Submerged in grimy water, shielding their skin from the sun, the hippos’ offensive odor caused me to curl my nose. “The government has warned us against getting too close to the pool,” Kimambo said matter-of-factly. Soon, some of the sedentary herbivores become agitated, grunting and standing up in the water. Not waiting around to find out why, I scurried up the hill, knowing that I’d pushed my luck long enough.

Working in the Lodge’s Discovery Centre, Edward, a soft-spoken Massai, was eager to teach me about his tribe, the Serengeti and especially, the Great Migration. Displayed in this space dedicated to education, conservation and research of the Park are animal skulls, educational books and posters, Massai memorabilia and a theater, where guests can watch wildlife documentaries. Perhaps the crowing jewel of the Centre, and the one in which Edward was the most proud, is the interactive 3-D map of the Great Migration. 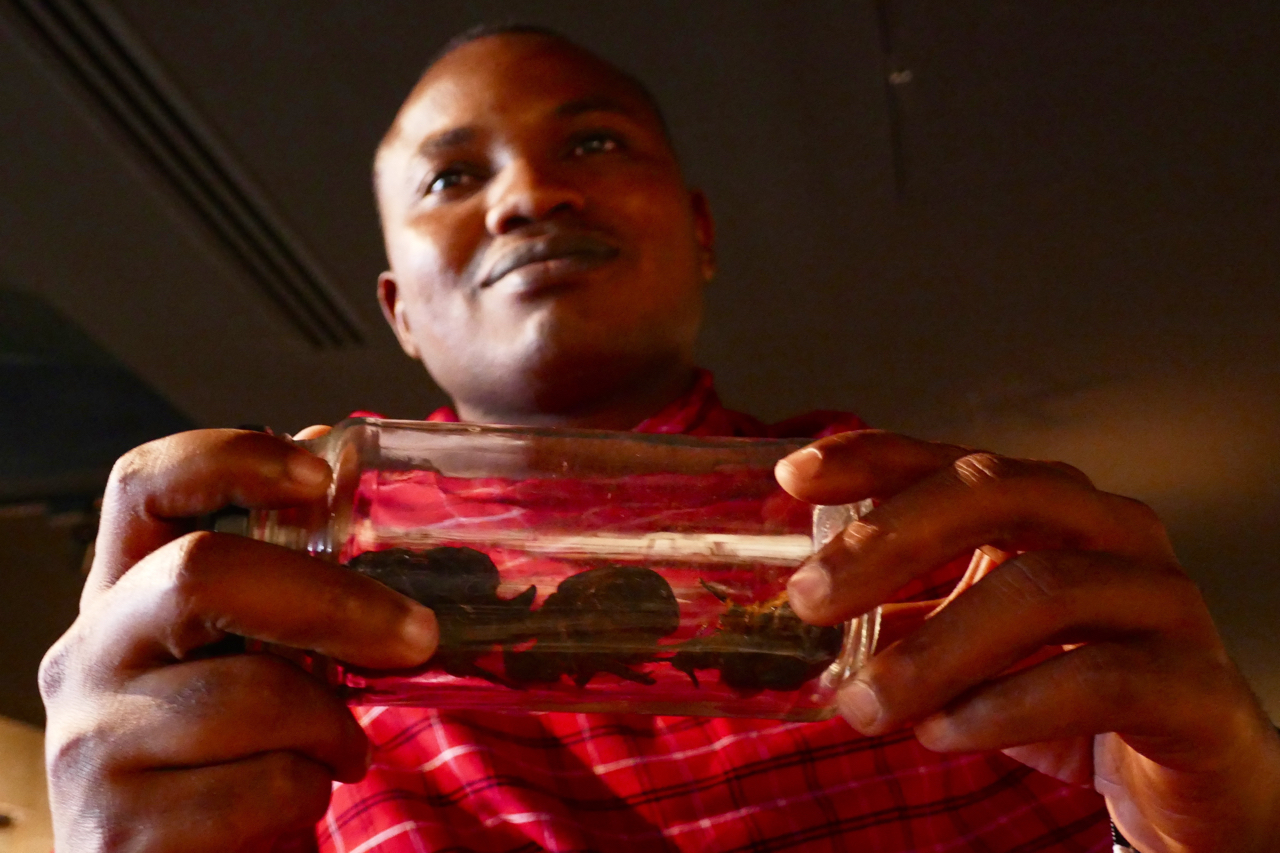 As the biggest terrestrial mammal migration in the world, the Great Migration is a hunt for greener grass, inadvertently becoming a battle between predator and prey. During late November and December, white-bearded wildebeests dine on the southern plains of the Ngorongoro Crater. In February, they give birth. 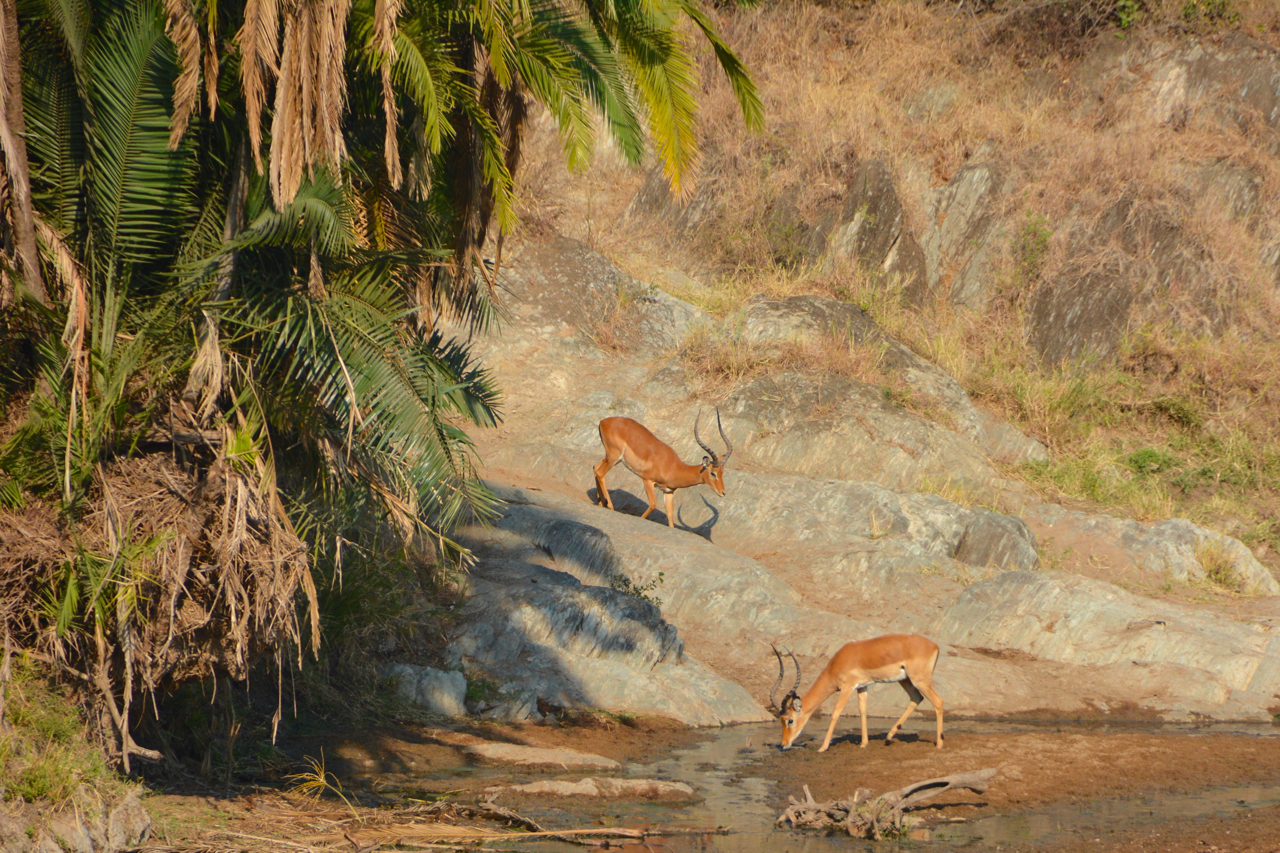 As the dry season approaches in May, over 1.5 million wildebeests, 300,000+ Thomson’s and Grant’s gazelles and 200,000+ zebras begin their annual trek across the Serengeti. Working in unison, the zebras lead the way by eating the tall grass, while the wildebeests follow, making their way into the nourishing plains of Kenya’s Maasai Mara Reserve. By June, the massive collection of herbivores arrives to the western corridor, where they must cross the Seronera and Grumeti Rivers. Crocodiles, along with lions, hyenas, cheetahs and leopards eagerly wait, prepared to devour the young and feeble. 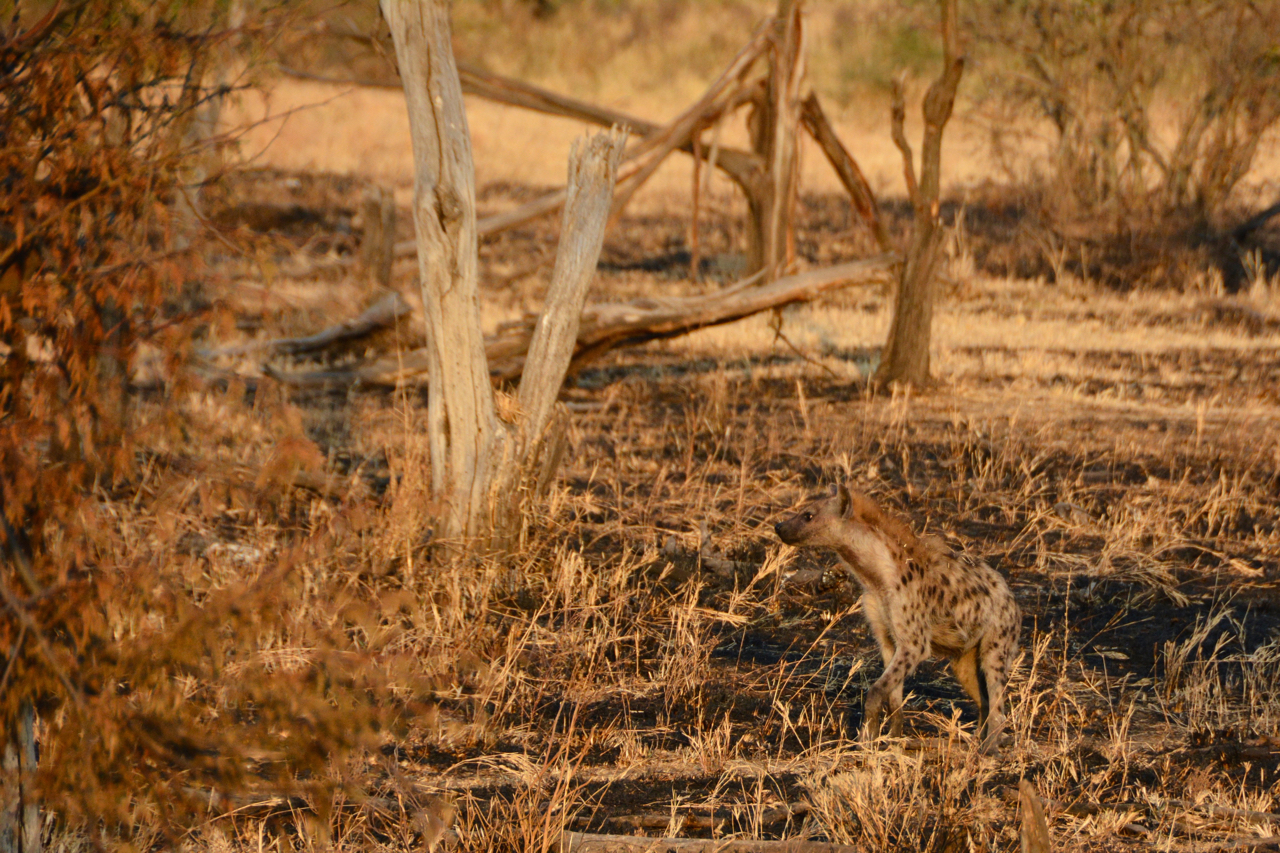 In September, the herds arrive to the northern Serengeti and the Mara River. The strong current, along with the gargantuan crocodiles, are the biggest causes for concern. These last obstacles are what separate the wildebeests from the green grass of the Maasai Mara plains. Those that do survive spend about a month grazing, before migrating again south to their breeding grounds and fertile land of Tanzania. Cause and effect equates to life and death in the Serengeti, and it’s estimated that 250,000 wildebeests don’t survive the 1,200-mile loop.

A Walk in the Wild 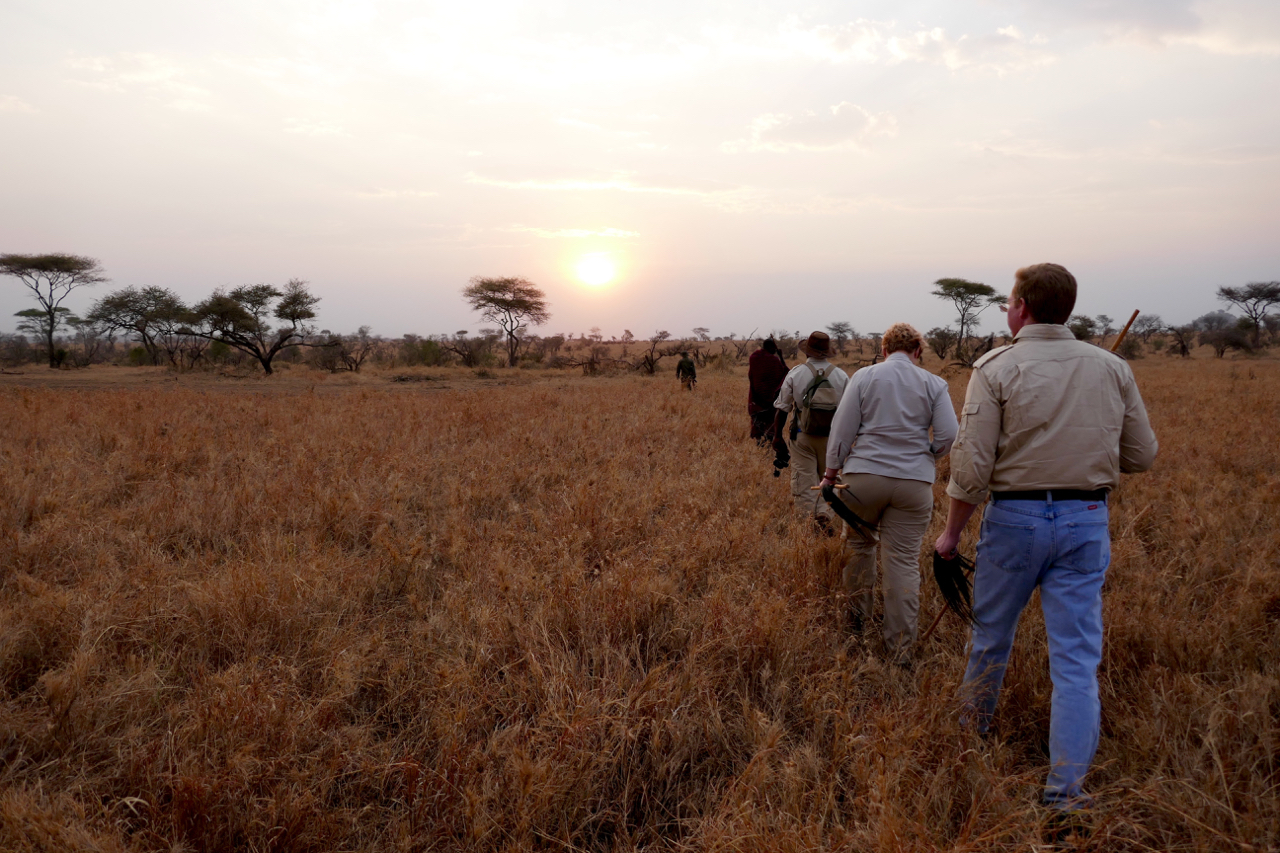 Priscus picked up a brown pellet, stuck it between his front teeth and bit down. “You won’t want to do this, but I’m a bushman.” It was zebra dung, and Priscus was explaining the process of how herbivores with four-chamber stomachs break down food. It was a few hours before sunset, and I was walking in the animal-created trails of the Serengeti. There was no protection of a Land Cruiser, only Priscus, two spear-carrying Maasai warriors, and a pair of armed TANAPA rangers. Talk about a walk on the wild side.

Single file, we trekked through the crunchy grass, taking note of the small details that went unnoticed from the Land Cruiser. Since traffic in the Park is limited to the dirt roads, foot is the only way to get an in-depth look at the flora and fauna, tracks, and poop. Who knew that so much information could be derived from a single piece of poop? With one glance, Priscus knew if the animal was a carnivore or herbivore, the species, and how long ago it made the deposit. 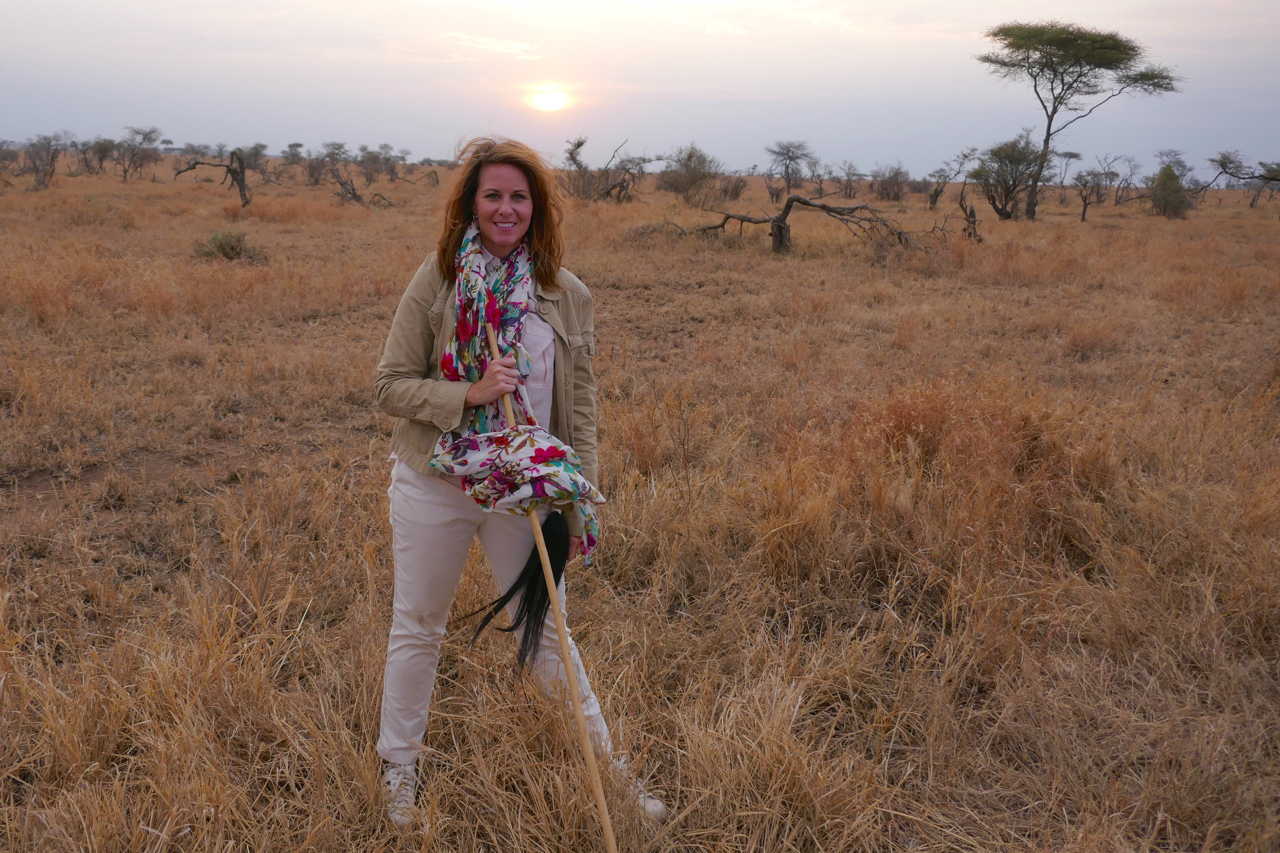 Our presence, however, didn’t go unnoticed. From a distance, a herd of about 40 buffalo kept one eye on us and one on their dinner. Aggressive in nature, the buffalo wouldn’t attack, as long as we didn’t come any closer. Breach that imaginary barrier, and all bets would be off. Sandwiched by the gun-toting rangers, we continued our hike, with the only sounds coming from the crunch of the grass and barking zebras. 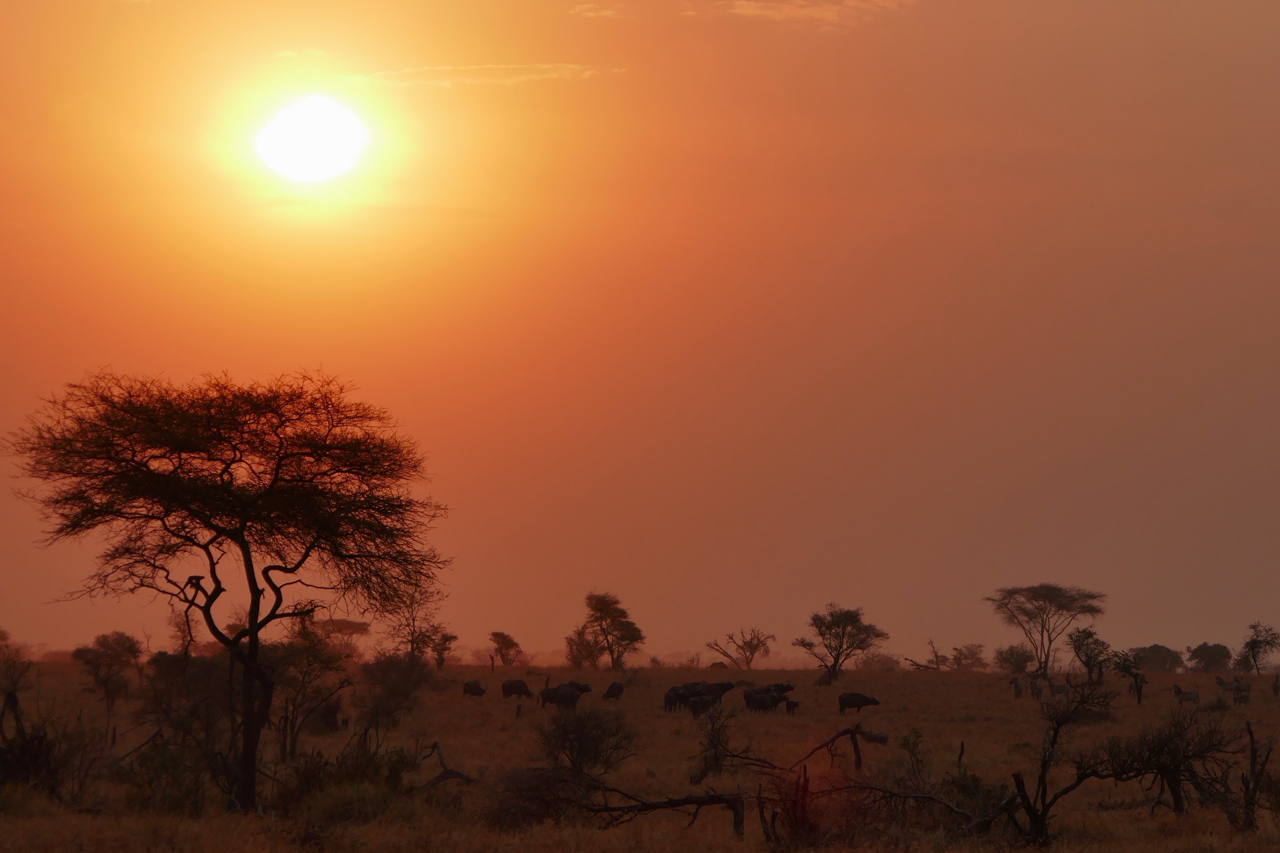 About an hour remained before sunset, and the sky above the Serengeti began its nightly show of auburn and crimson. My mind drifted to the nocturnal hunters soon on the prowl. Priscus directed us to a pile of burgundy boulders. Standing behind a makeshift stocked bar was Calvin, the Four Seasons driver that picked me up from the Seronera Airport. As customary in the Serengeti, we saluted the day with gin and tonics and watched the sun disappear from atop the pile of rocks.

Soaring above the Serengeti 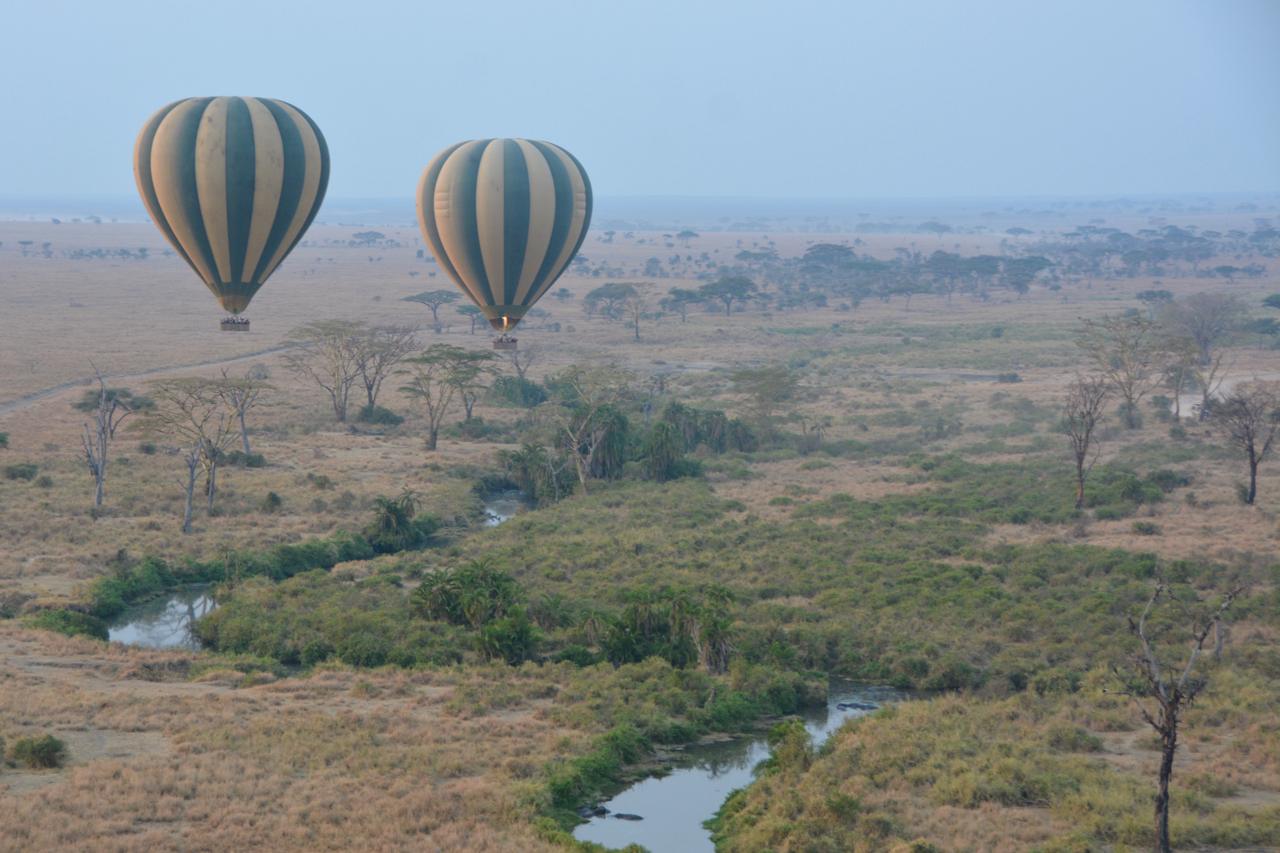 As if tethered to a star, my hot air balloon sailed above the scorched Serengeti. The sun was rising, and the herbivores were beginning another day of grazing. Carnivores devoured their last bites, while scavengers waited patiently for the remains. Gazelles and impalas scrambled as the captain ignited the burner of the 16-passenger balloon. We skimmed the land and soared above treetops, spotting the Serengeti’s feathered residents. Even the captain’s textbook landing couldn’t bring me down. With spirits high, we toasted the unforgettable flight with Champagne and an English-style brush breakfast, beneath the shade of an awesome acacia tree. 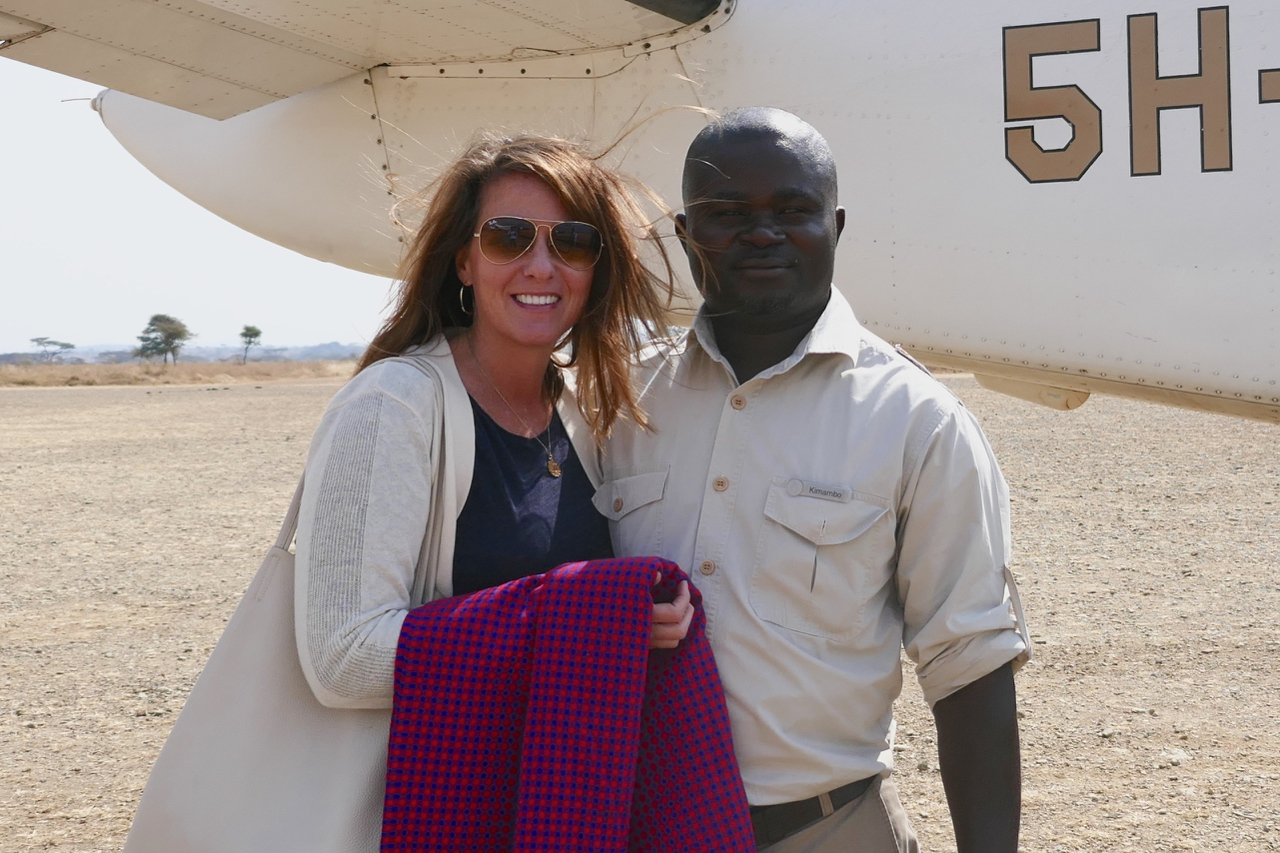 Wonder was the engine that drove my curiosity. My time on the ‘endless plains’ was an education, not only of the flora and wildlife, but also the people who live alongside both. I left with a deeper understanding of nature, an unquenchable thirst for the Serengeti and a red and blue-checkered Maasai shuka, a kindhearted gift from Kimambo that will forever remind me of Tanzania.

Read my Serengeti article in Four Seasons Magazine, “What I learned on Safari“ 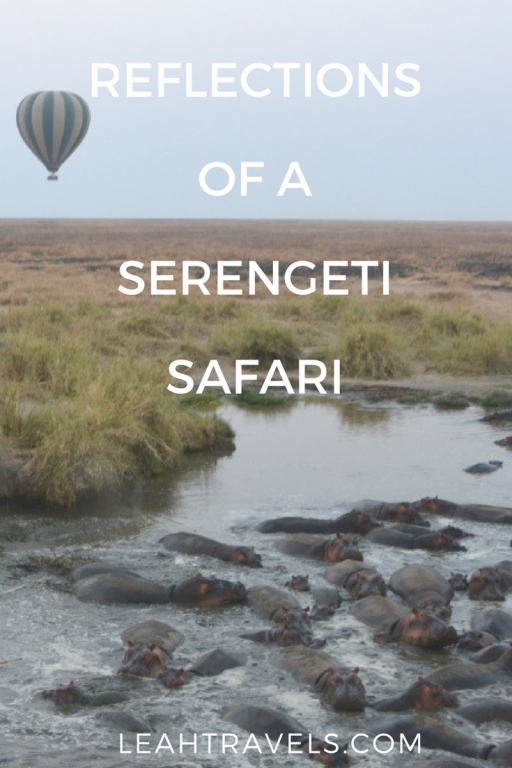 I was a guest of Four Seasons Safari Lodge Serengeti. In no way was my opinion swayed by the world’s best infinity pool, the constant flow of elephants by my suite, or the incredibly kind hospitality shown. As always, opinions are mine.