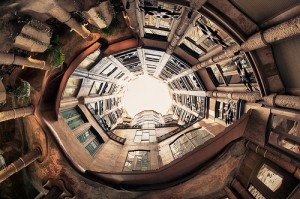 Casa MilÃ , better known as La Pedrera (Catalan for ‘The Quarry’), is a building designed by the Catalan architect Antoni GaudÃ­ and built during the years 1905â1910, being considered officially completed in 1912. It is located at 92, Passeig de GrÃ cia (passeig is Catalan for promenade) in the Eixample district of Barcelona, Catalonia, Spain. The building is part of the UNESCO World Heritage Site “Works of Antoni GaudÃ­”.