If you’ve met chef Dean Fearing then you’d certainly remember. A Southerner by birth and a Dallasite by choice, Fearing has shaped the landscape of Southern cuisine as it’s known today. For over twenty years he was at the helm of the Dallas dining institution, Mansion on Turtle Creek, before leaving in 2007 to start Fearing’s located in the Ritz-Carlton, Dallas. 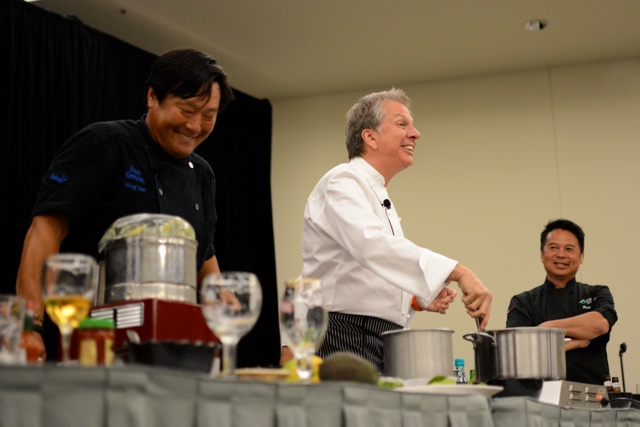 Dean Fearing is the definition of a long, tall Texan. Having never met a stranger, his laugh is infectious and his gregarious nature makes even strangers feel like they could be childhood friends. Charming and approachable, it’s safe to say that Fearing is as much of a draw for his customers as the delicious food he creates.

Fearing acquires accolades like he does Lucchese boots. Besides the ringing endorsements from prestigious publications such as The New York Times, Food and Wine, and Newsweek, Fearing’s also been bestowed the honor of “Restaurant of the Year” and “Table of the Year” by Esquire. As if that weren’t enough, he was also recognized as a “Pioneer of American Cuisine” by The Culinary Institute of America. However, you’d never know any of this by chatting with the chef; there’s not an ounce of pretense, as I quickly found out. 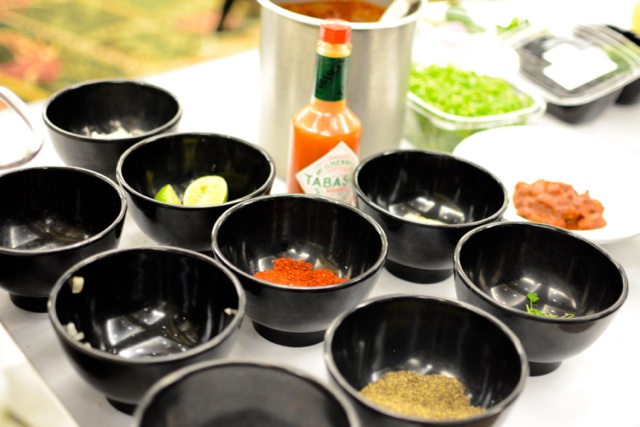 I wasn’t trying to insert myself into the Hawaii Food & Wine Festival’s demonstration, “Fire it up with Chilis,” featuring Fearing, as well as chef Charles Phan of San Francisco’s The Slanted Door and chef Ming Tsai of Blue Ginger in Massachusetts. It just happened that way. 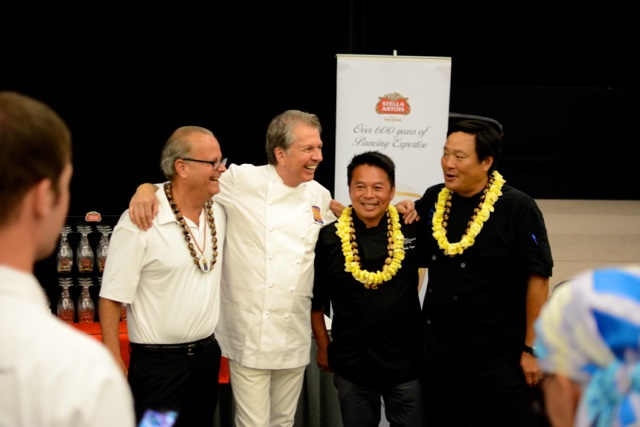 “Chef Fearing, what’s your stance on beans in chili?” I asked.

Upon hearing my Texas twang, the chefs and master brewer, George Reisch of Anheuser-Busch, broke into laughter. They were all convinced I was some sort of audience plant.

“Well, that’s really a Mason-Dixon Line question,” said Fearing with a thick Southern drawl and a huge grin on his face. 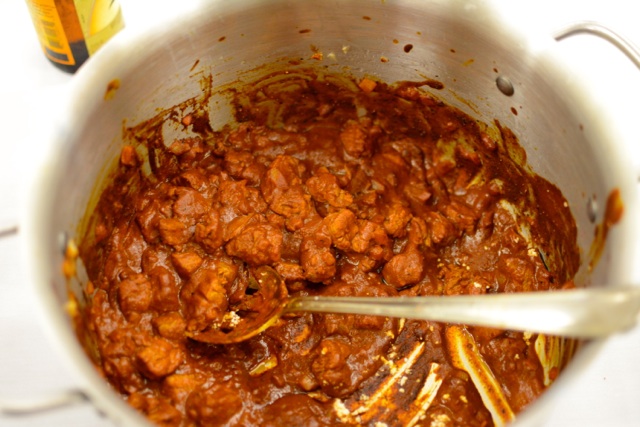 For the record, no self-respecting Texan puts beans in chili or would dare use ground beef. Doing so would be considered blasphemy and a slap in the face of state dish of Texas.

Somewhere between describing the chili paste making process and professing his love of peppers, Fearing launched into the tale of how Cos’ Chili got its name. A natural-born storyteller, he hooked the audience immediately with the mere mention of Bill Cosby. The legendary comedian was a guest of the Mansion on Turtle Creek when he first got a taste of Fearing’s chili. Declared the best he’d ever eaten, Dr. Cosby often has his pilot land at Love Field to get a chili care package from Fearing. Thus, in honor of its famous fan, the dish is known as Cos’ Chili. 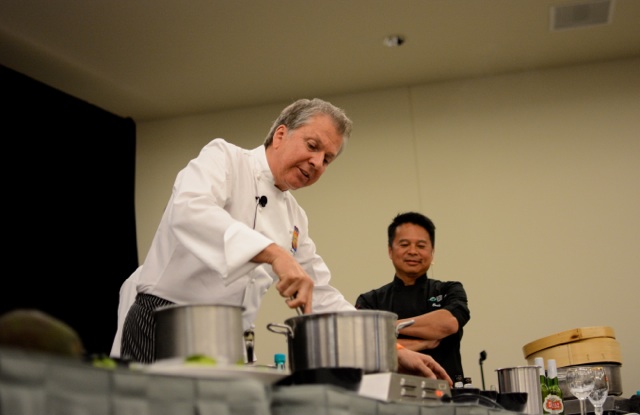 As laughter reverberated throughout the room, servers delivered small samples to the audience. Fearing eagerly looked on from stage as participants lapped up his chili. Looking around, I could tell that it was the first time many had eaten chili, especially real Texas chili. Turning my attention back to the bowl of red before me, I took special care in getting the perfect proportion of white rice and meat onto my spoon. I savored the spice before finally washing it down with a Stella Artois, the beer paired with Fearing’s dish. 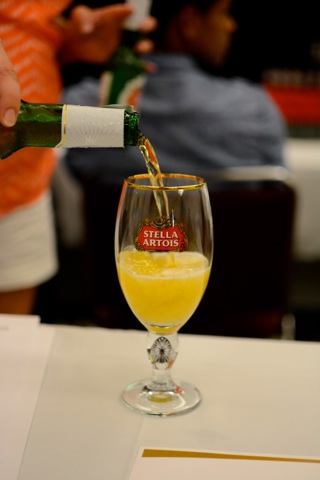 “Hey, Tex! Is that the best chili you’ve ever tasted?” asked George Reisch.

I stopped scraping the bottom of my bamboo bowl and directed my attention to the stage.

“It’s the second best…behind my grandmother’s.”

Again, Fearing’s roaring laughter filled the room. He understood I was teasing, and didn’t skip a beat when I asked when the Fritos were coming out.

“Oh, yes! That’s another great way to have this chili. Pour it over the top of Fritos and melt a little cheddar cheese on top.”

I’m quite certain that it’d taste great poured on most anything. 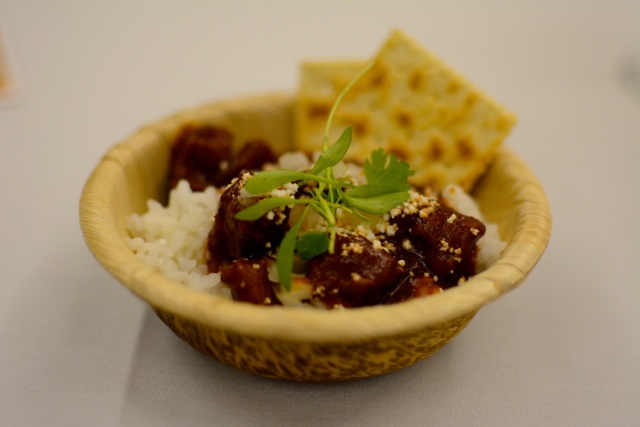 For me, chili equates to fall and football. And as temperatures continue to drop and my beloved Red Raiders and Texans take the field, I find myself wanting a big bowl of red now more than ever. I’m inspired to cook up a pot of Fearing’s chili myself, but perhaps I’ll just make the four-hour drive up I45 to Dallas for Sunday brunch. After all, I can smell the Cos’ Chili and hear Fearing’s laughter all the way down in Houston. 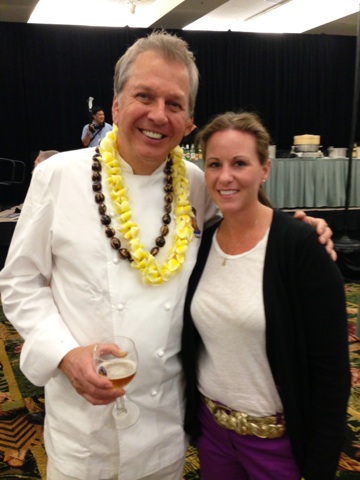 Juice of one lime

In a medium sauté pan over high, heat the canola oil. Add the meat and onions and cook until the onions are translucent. Add the chili paste and cook over a medium heat until the meat is tender—about one hour. Season with salt, pepper, Aleppo pepper, Tabasco, and lime juice. Add chipotle chilis to make the chili hotter. Serve over white rice.

Preheat the oven to 350. Place the chilis on a sheet pan and toast in the oven for about one minute. Remove from the oven and set aside.

In a medium sauté pan over medium-high heat, add the oil, onions, carrot, shallot, garlic, and celery. Sauté until the vegetables begin to caramelize. Stir in the ancho and pasilla chilis, cumin and coriander seeds. Deglaze the pan with beer and orange juice, and cook for an additional five minutes over medium heat. Add the peanuts and tortilla strips and cook mixture until 75% of the liquid is reduced. Remove from the heat. Cool a little and puree in a blender. Pour through a fine strainer.

In a medium sauté pan, heat the oil to 350. Add the tortilla strips and cook until crispy. Remove from the oil and place on paper towels. Season with salt.

5 European Cities to Visit during the Fall