When I’m home I rarely cook. It’s not that I can’t cook, but rather don’t see the value in spending all that time making a meal when a sandwich will satisfy my hunger. This mentality must seem odd coming from someone who writes so much about food, but frankly, I’m not a picky eater despite all the world-class meals I get to eat. 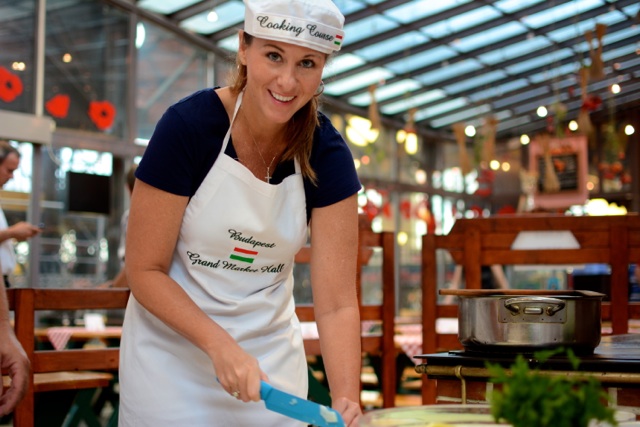 What also might seem strange is the fact that I really love taking cooking classes when I travel. I’ve learned how to make pizza in Rome, sushi in Maui, and a host of Italian dishes in my daylong class in Umbria. I’ve attempted strudel making in Budapest, which is very difficult, as it involves stretching dough so thin that one must be able to read the newspaper through it. Cooking classes provide insight into the culture and history of a place, and also allow me to interact with locals. Thus, this summer when I spent 48 hours in Budapest with Kensington Tours, I requested an itinerary focused on culinary, wine, and sightseeing. That’s exactly what my private guide, Sándor, delivered. 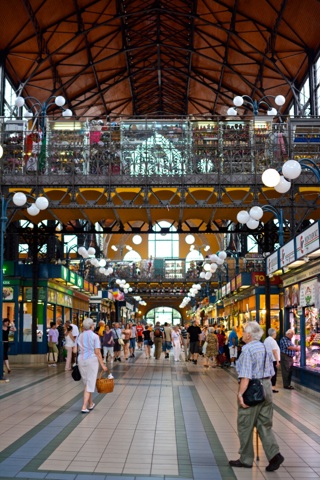 The first order of my action-packed day was a goulash making class at Fakanál {Wooden Spoon} Restaurant located in the Great Market Hall {aka Central Market Hall}. Found at the Pest end of Liberty Bridge, the market is a beautiful three-story building built in the late 1890s and a must-visit while in Budapest. During World War II, the market was seriously damaged and closed. Extensively restored in the mid 1990s, it’s still an important place for locals to shop. Historical photos can be seen on the walls of the second floor. 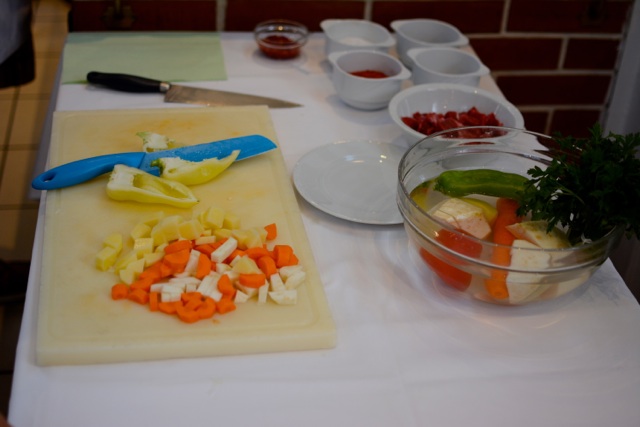 At only 9 am, the Great Market Hall was a bit quiet. The ground floor had a smattering of Hungarians buying fresh fruit, vegetables, and meat for the meals ahead, while the second floor was all but deserted. Vendors selling Hungarian souvenirs were straightening their booths, and a few locals sat around drinking coffee and eating lango—deep-fried dough similar to a funnel cake that’s topped with sour cream and cheese. Food stall workers were bustling getting ready for the lunch rush, but other than that, I had the place to myself. 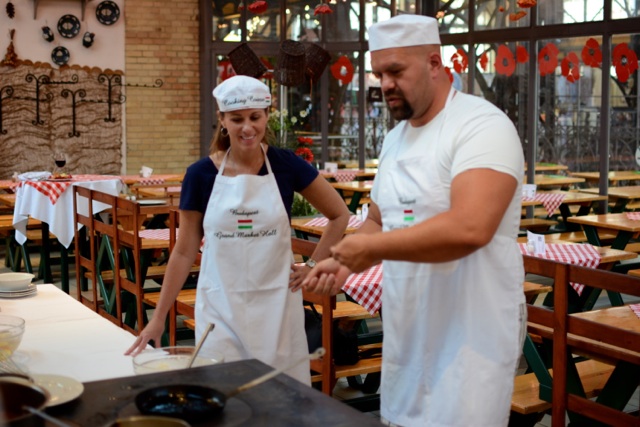 My goulash guru, Erik Baumann, was waiting for me inside of Fakanál Restaurant. This giant of a man with a shaved head and goatee looked more like an action movie hero than a cooking instructor. Located in the dining room of the large restaurant was a stovetop and next to it was a long table filled with all of the necessary goulash ingredients, knives, and cutting boards. All business, Erik was ready to get started.

I was given a brief history of Hungarian goulash. Meaning “herdsman” in Hungarian, goulash gets its red color from the spicy Hungarian paprika, which was brought to the country by the invading Turks. 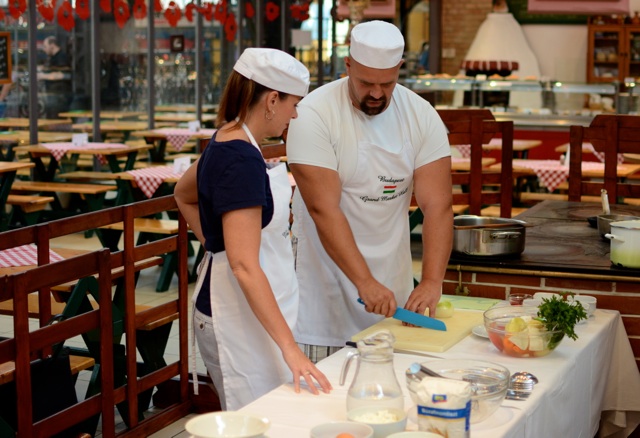 It was made VERY clear that the dish is NOT the same as in the Czech Republic, which is thicker, uses less vegetables, not as spicy, and served with houskové knedlíky {Czech dumplings}. I quickly figured out that Hungarian goulash also is nothing like my father’s goulash, which is basically all the leftovers in the refrigerator made into a soup. No, I was going to make the Hungarian version—a somewhat spicy stew served with bread on the side. 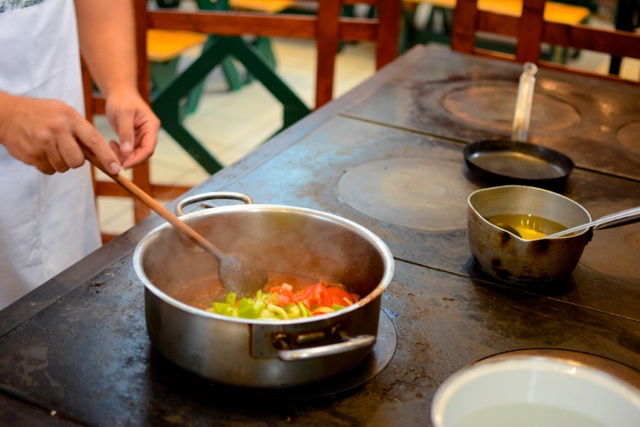 Once the history lesson was complete, we moved on to the actual cooking. I attempted to cut the vegetables as swiftly and effortlessly as Erik, but losing a finger was not on the itinerary, so I deferred to him. We browned meat, poured in the already measured spices, threw in the chopped vegetables, and voilà—the one-pot dish was on its way to becoming traditional Hungarian goulash. 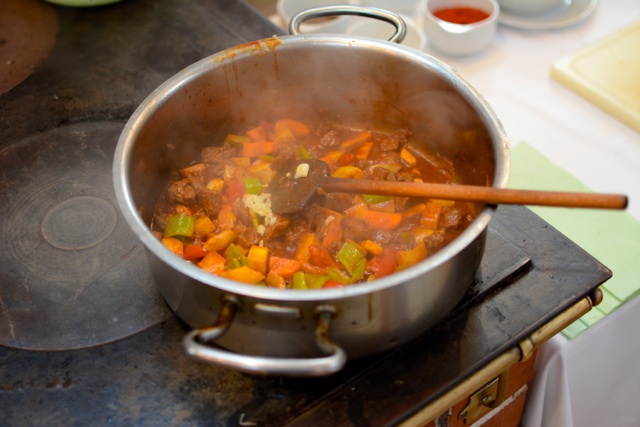 Not having the two hours to tend to the pot while it simmered, Erik just happened to have a bowl prepared for me. I took my seat at the table covered with a red-checkered tablecloth and had my first taste of real goulash. It was good. Actually, I should say it was really good. It had a real kick of spice, which is something I love and don’t get much of when visiting Europe. I soaked up the liquid with bread and savored the flavors before washing it down with a Hungarian red wine. So what if it was only 10 am. When in Hungary, right? 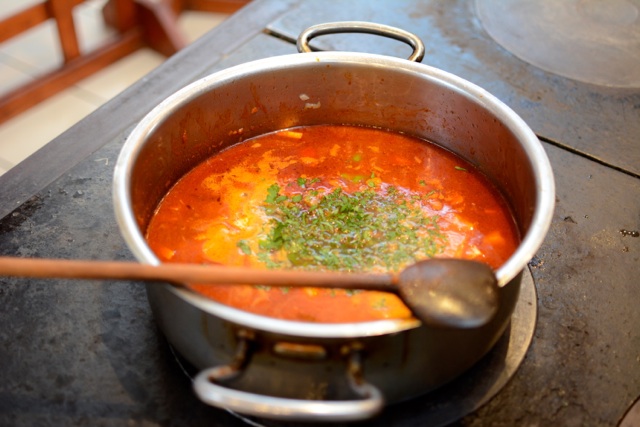 Temperatures have finally dropped below 90 in Texas, and I think it’s about high time I whip up a pot of Erik’s traditional goulash. If you’d like to do the same, I’ve included his recipe below. Let me know how it turns out, or better yet, send me some. 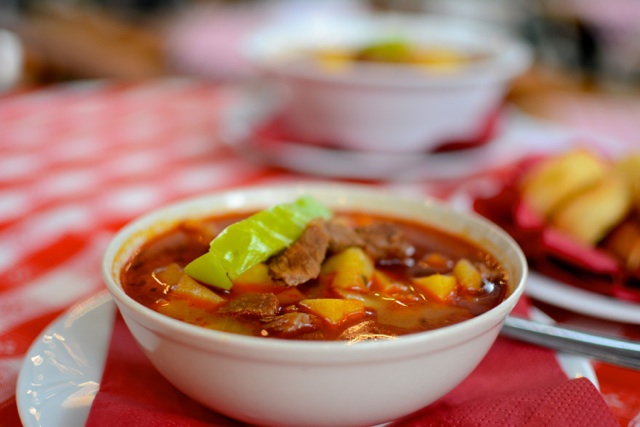 Cut the meat into small cubes.

Finely chop the onion and garlic.

Fry the onion in hot oil until it becomes transparent.

Sprinkle with paprika and add a little water.

Add the meat, and flavor with salt, pepper, garlic, and caraway seed.

Place the sweet pepper and tomato on top.

Simmer for an hour, and then add the vegetables and potatoes.

As soon as the potatoes are tender the dish is ready to serve.

Serve the goulash with thick, rustic bread and a full-bodied red wine. 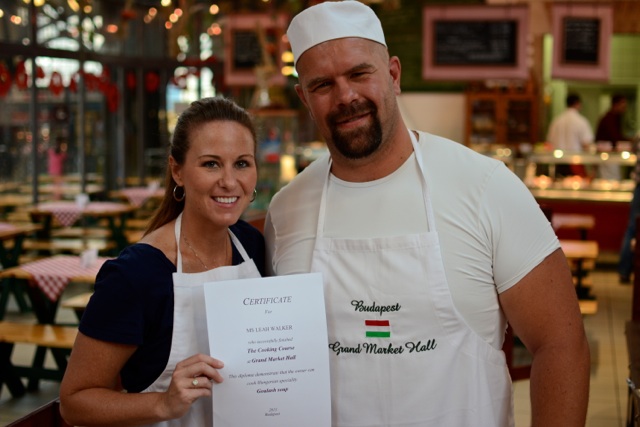 I was a guest of Kensington Tours. In no way was I swayed to write a positive review by the personalized and exclusive itinerary, Erik’s giant muscles, or the spicy goulash. As always, opinions are mine.

A Guide to Coffee & Cocktails in Italy