The best way to see Paris is on foot, but I think the best way to experience Paris is by sampling the phenomenal food and drinking copious glasses of wine. One of the best places to combine the two is in the Latin Quarter. 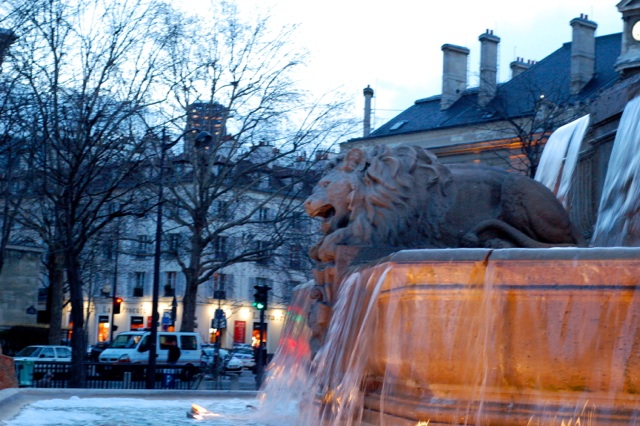 Located on the left bank in the 5th and part of the 6th arrondissement, the Latin Quarter was once known for its bohemian vibe. The Latin Quarter is home to no less than four universities, with the most famous one being the Sorbonne. It’s now full of students and lively cafes and bars. 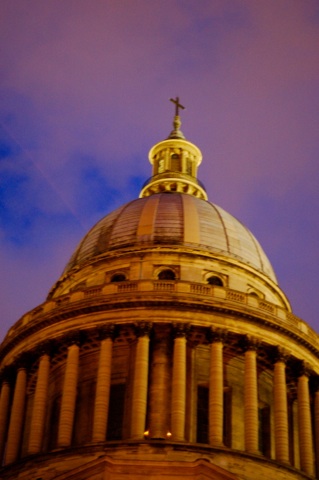 One rainy Monday evening in March, I decided to set out and see a part of Paris I’d yet to experience. This tour included not only the Latin Quarter, but also all the typical French food I’d yet to try. I was staying in a fabulous apartment not far from the Latin Quarter, but any hotel near the center of Paris would be convenient. So with camera and hand, I made the short walk to Le Deux Magots, which would serve as the starting point for my culinary crawl. 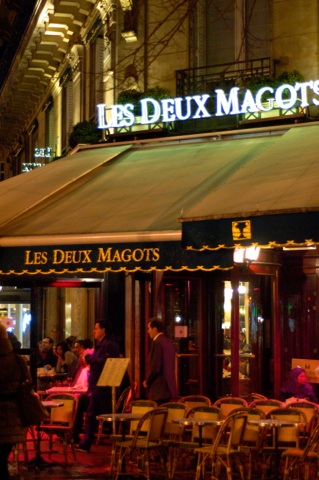 This café is located in Saint-Germain-des-Prés and is quite the tourist destination. It’s a classic French café with its outside dining, but what I love about this place is its history. Ernest Hemingway and Pablo Picasso among others used to dine here. I’m a sucker for Hemingway. The food’s not bad either, but it’s priced as one would expect on a popular corner in Paris. I elected not to eat anything here this time around. 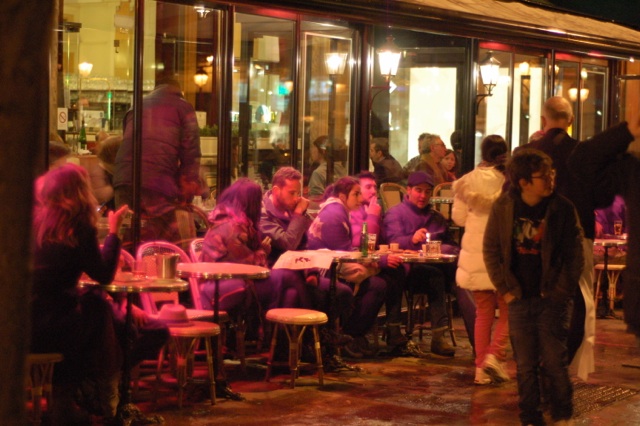 Directions to Stop One:

From Les Deux Magots take Rue des Canettes to Saint-Sulpice, the second largest church in the city behind Notre Dame. Then walk along the longest road in Paris, Rue de Vaugirard, past the Sénat to Boulevard Saint-Michel. Head north on Boulevard Saint-Michel to the Sorbonne. From the Sorbonne, go south on Rue Saint-Jacques to Rue Clovis where you’ll head east. This will take you to the Pantheon. Originally a church, this massive structure is a mausoleum for distinguished French citizens. Also next to the Pantheon is Sainte-Geneviève Library and Saint-Étienne-du-Mont Church, which contains the shrine to St. Geneviève, the patron saint of Paris. From the Pantheon, take Rue Clovis east to Rue Descartes south to Place de la Contrescarpe where you’ll find your first stop. 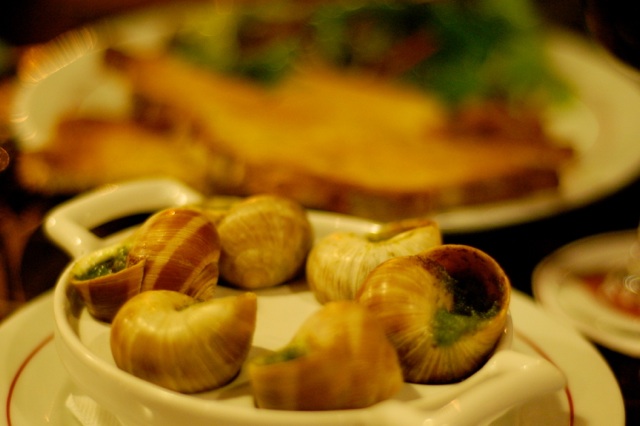 Comfortable and charming, Café Delmas is located in the famous Mouffetard Quarter. With its large terrace, it’s a great place to grab a bite to eat and a cocktail or glass of wine. On this, my first stop, I went all in by ordering escargot and duck pâté. The escargot I loved. What’s not to love with so much butter and garlic involved? I could do without eating the duck pâté again, but the lovely glass of Bordeaux did well in taking the taste out of my mouth. 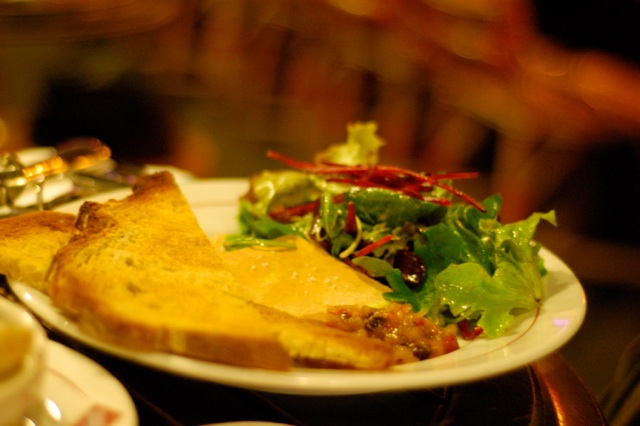 Go back the way you came where you’ll pass by the north side of the Pantheon again. Circle around the Pantheon until you reach Rue Soufflot. Take Rue Soufflot to Rue Monsieur-le-Prince to the second stop. 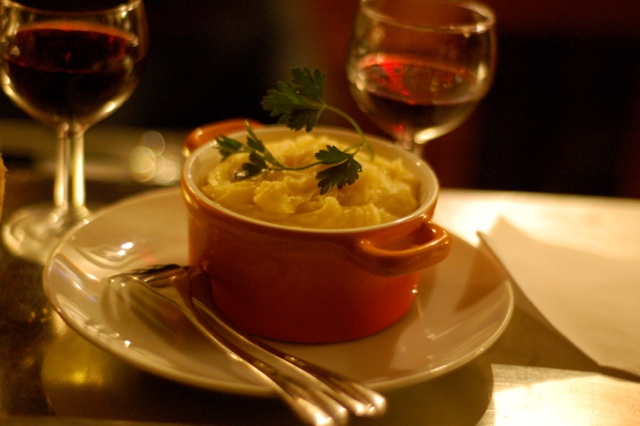 This two-story neighborhood bistro is near the Luxembourg Gardens and is basically a place where locals hang out, as I discovered upon my visit. The place was absolutely packed and I literately had to push my way to the bar. The best I can guess is there was some sort of engagement party going on. The fight to claim my spot was worth it. Not only did I have yet another glass of fabulous French wine, but I experienced my very first taste of aligot. My life changed for the better when I discovered this dish made from mashed potatoes blended with butter, cream, crushed garlic, and melted cheese. Aligot will be the first thing I eat when I return to France. 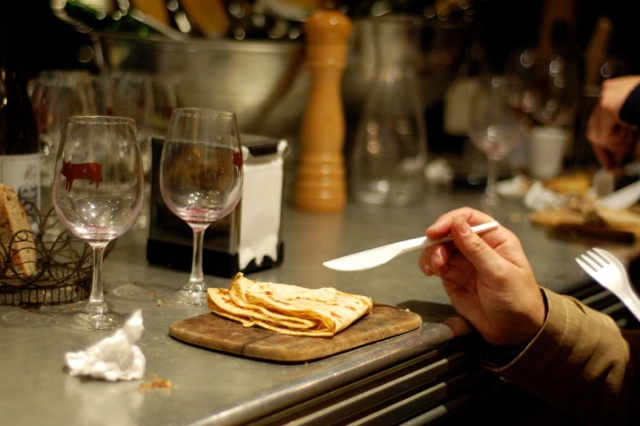 This tiny hole-in-the-wall is often standing room only. It bills itself a crêperie, wine bar, and place for hors d’oeuvres. It also specializes in pork; even the wine glasses have a pig silhouette. Since the order of the evening was to try something new, I ordered bird tongue soup. A broth-type soup with, you guessed it, tongues of birds, was just alright. It was nothing crazy or special. At least I can say I’ve eaten bird tongues though. L’avant Comptoir is a great place to pop in for a quick bite and glass of wine. 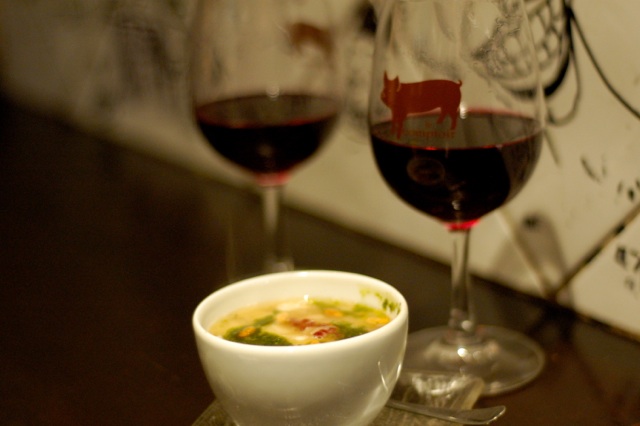 Head north on Rue de Conde to Boulevard Saint-Germain. Take that west to Rue de Seine to the first right, which is St. Clement. 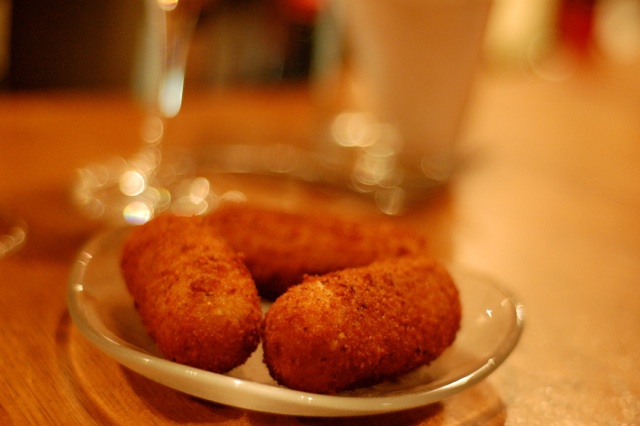 Located in the shopping hall of Marché Saint-Germain, J’Go has a seasonal menu that uses in-season ingredients. It is a typically French restaurant that houses a giant leg of ham for all to ooh and ahhh over. I sat at the bar and had croquets and more wine. I remember enjoying the croquets and the wine (obviously), but that’s just about it. That’s just one of the hazards of a culinary (wine) crawl through the streets of Paris. 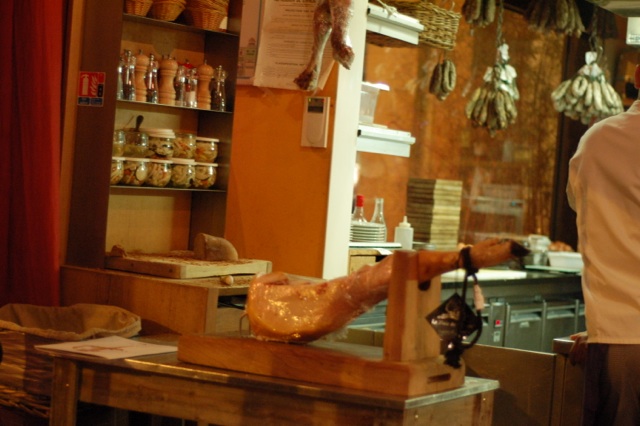 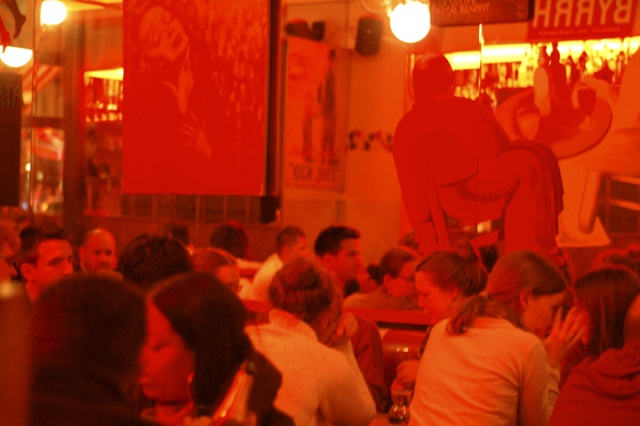 This place serves food, although I didn’t have any. However, I did have some sort of vodka-fruity martini-type thing. On a rainy Monday night, this place was still lively. I seemed to be the only non-French person in the place, which is just fine by me. Oh, and the bartenders wore denim overalls, which is apparently fashionable in Paris. And, the place was really red, like whorehouse red. 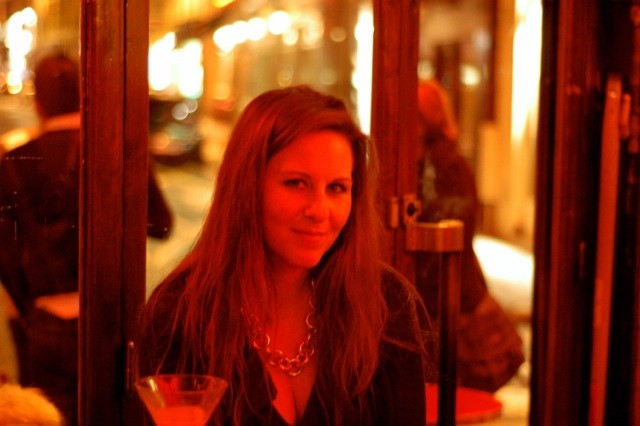 Directions to the Starting Point:

Take Rue de Buci down to Boulevard Saint-Germain. From there, head west where Les Deux Magots will be on your right. 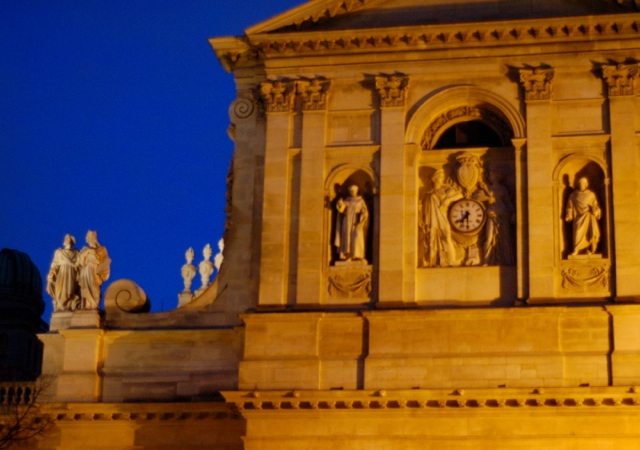 It’s safe to say that by the end of this walking tour of the Latin Quarter, I was able to experience a part of Paris I’d never seen. Ducking into small streets yielded even more surprises. I dined on many standard French dishes, loving some and feeling ambivalent about others. All in all, I loved this night in Paris. It was simply one of my favorites, and that includes dinner with Lionel Richie. I can’t wait to return to Paris and explore another area while stuffing my face and guzzling as much wine as my stomach will hold. 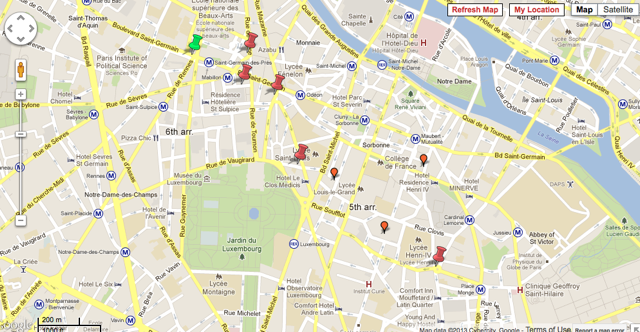 What I wish I knew before Renting a Car in Italy