There is no doubt that the Las Vegas strip is appealing in a French-speaking-Bradley-Cooper-sort-of-way. Its lights are beautiful, over-the-top, and beg to be ogled over. It’s easy to love the Strip’s grand architecture and mind-boggling creativity. Yep, the Strip is sexy.

But what about the oft-forgotten Downtown Las Vegas? It’s sexy too, in a gritty, dangerous-sort-of-way. If the strip is Bradley Cooper, then Downtown is Collin Farrell. It drinks to excess, smokes like a chimney, drops the F-bomb regularly, and has lots of random sex. Downtown is the place your mother warned you about. But is it really? After all, if Collin Farrell can go to rehab and straighten up his act, why can’t Downtown Las Vegas?

I must admit that I was seduced by the Strip and its fake New York skyline and explosive pirate show; its Eiffel Tower is the closest to Paris I’ve gotten. The giant pyramid and dancing fountains are marvels. And despite all the celebrity chefs’ restaurants and Cirque shows, I keep finding myself in the arms of Downtown. 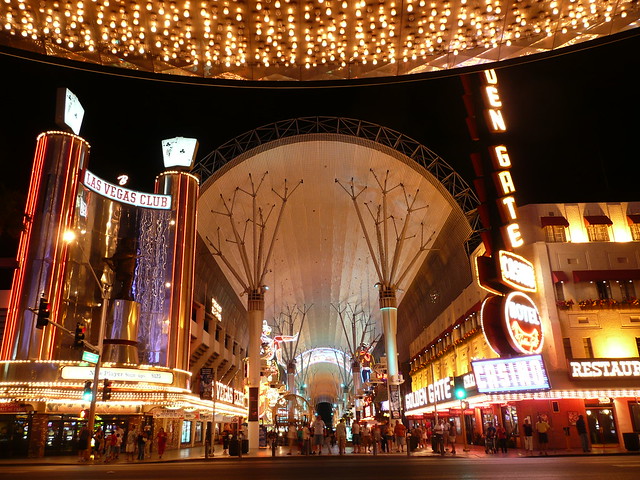 Original Vegas has mostly been white washed, but Downtown sticks to its roots. Downtown is a place for the everyman; there is no pretense here. It’s a place where street performers are treated like stars and velvet ropes are absent. Reservations aren’t needed for dinner and comps are relatively easy to come by. Cabs aren’t necessary to visit another casino and history is alive and well.

In 1906, the Golden Gate Hotel and Casino opened in Downtown, making it the oldest in Vegas. You can still find a room and a game there. Vegas Vic, Fremont Street’s giant neon cowboy, is the world’s largest mechanical neon sign. The Fremont Street Experience, a five-block entertainment complex, features the world’s largest video screen. It spans 1,500 feet long, 90 feet wide, and is suspended 90 feet above a pedestrian walkway. Every hour on the hour from dusk till midnight, the screen’s 12.5 million LED lights and 550,000-watt sound system comes alive showing one-of-a-kind light and sound shows. And in a town where entertainment costs a bundle, Fremont Street regularly offers free concerts. 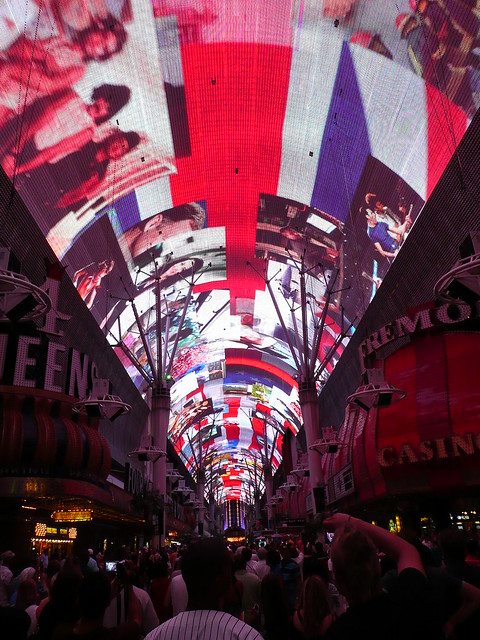 Maybe it’s the fact that Downtown works so hard for my adoration that makes me love it so. Perhaps it’s that the Golden Nugget comps my rooms, food, and even gives me gambling money. I’m not sure, but I do know that Downtown is imperfectly perfect. You’re not going to find this unique atmosphere on any online casino, riverboat casino, or the Strip, a fact that makes me happy. 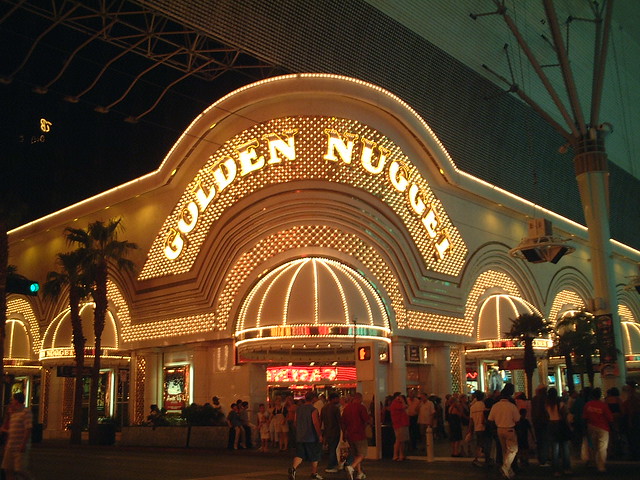 I love the clouds of smoke that billow out of Binion’s and the worn felts at the Four Queens. I giggle when I see a waitress at Mermaid’s smoking a joint in the corner. I shake my head at the drunk, homeless person who runs through Fitzgerald’s screaming Bible verses. There is a distinct cast of characters that roam Fremont Street, and although the faces change, the vibe does not. And that vibe is what keeps me coming back, ready to throw down my hard-earned money at the blackjack table. Hints of vintage Vegas are found everywhere in downtown. This is how it should be, so Steve Wynn, Harrah’s, and MGM, keep your grubby effing hands off Downtown. It’s perfect just the way it is.