I must admit that when Atout France asked me to cover the Cognac region for their #FranceWineTravels campaign, visions of old men smoking cigars and Busta Rhymes immediately came to mind. But after thinking about the trip for about fifteen seconds, I realized that I knew absolutely nothing about Cognac. I couldn’t even recall tasting the grape-based spirit. I’ve been educated numerous times on the fine facets of French wine on my jaunts to the various wine-growing regions, but this trip to Cognac would be an in-depth study. Essentially, I was going to Cognac college! 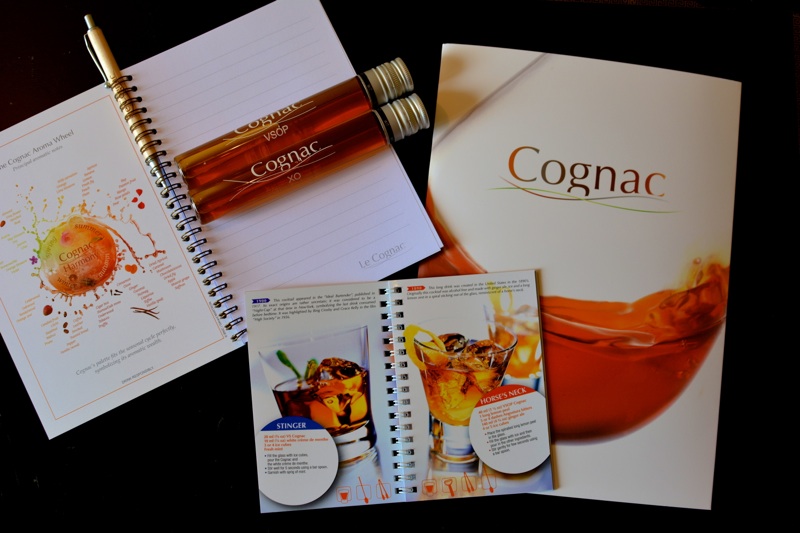 During my six-day trip, I visited four Cognac houses {Courvoisier, Camus, Martell, and Rémy Martin}, saw coopers working at a barrel factory, walked the vineyards, and toured two museums {Le Musee des Arts du Cognac and Espace Découverte en Pays du Cognac}. Though, like most things French, Cognac isn’t simple; there is a long history, tradition, and regulations that must be adhered to. 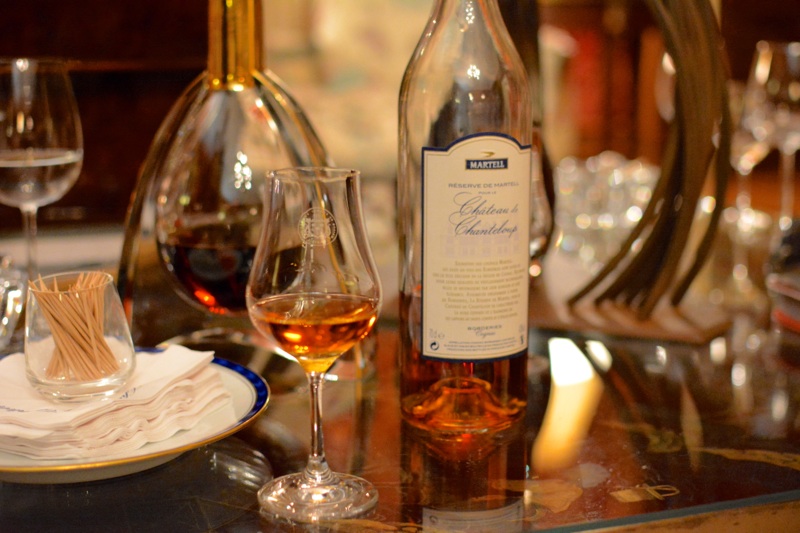 Vineyards in the Cognac region date to the 3rd century when the Romans controlled the area. Running through Cognac, the Charente River brought trade, most notably salt from the northern European countries. With the movement of Dutch ships along the river, the popularity of the region’s wine grew during the 13th century. In the 16th century, the quality of wine suffered due to overproduction. Since it couldn’t withstand long sea voyages, the Dutch began distilling the wine, turning it into brandewijn {burnt wine}. At the beginning of the 17th century, double distillation transformed wine into eau-de-vie {‘water of life’ in French}, which is more concentrated and thus cheaper to ship. It was also discovered that aging in the barrels improved the taste. 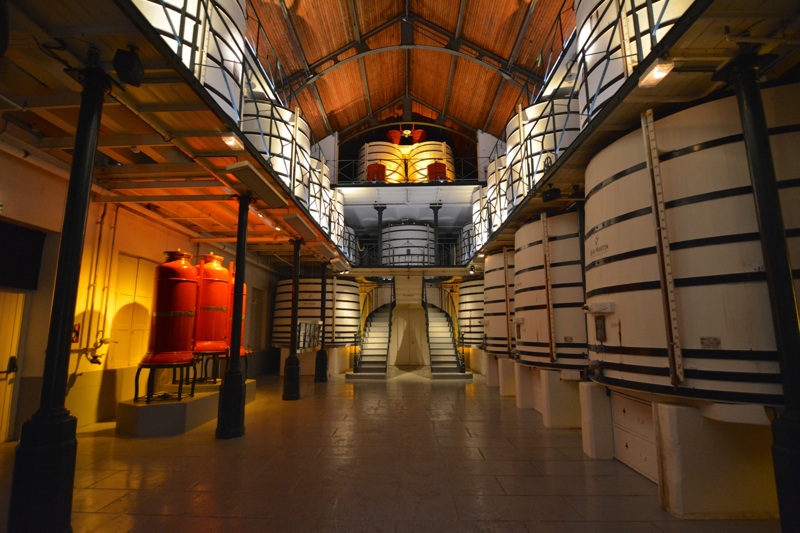 During the 18th century, many Anglo-Saxons came to Cognac and established eau-de-vie houses, some of which are still in business. In the late 19th century, phylloxera destroyed most of the vineyards. American rootstock that is immune to the disease was used to replant the region with the Ugni Blanc grape in the 20th century. It was also during this time that Cognac was recognized as a Controlled Appellation of Origin {AOC}, which means that only brandy produced in the region has the right to be labeled as Cognac. Today, the spirit is exported to more than 160 countries, with only 2% of the production remaining in France. The top three markets for Cognac include the United States, China, and Russia, with the USA being the largest consumer, but the Chinese buying the most expensive bottles. 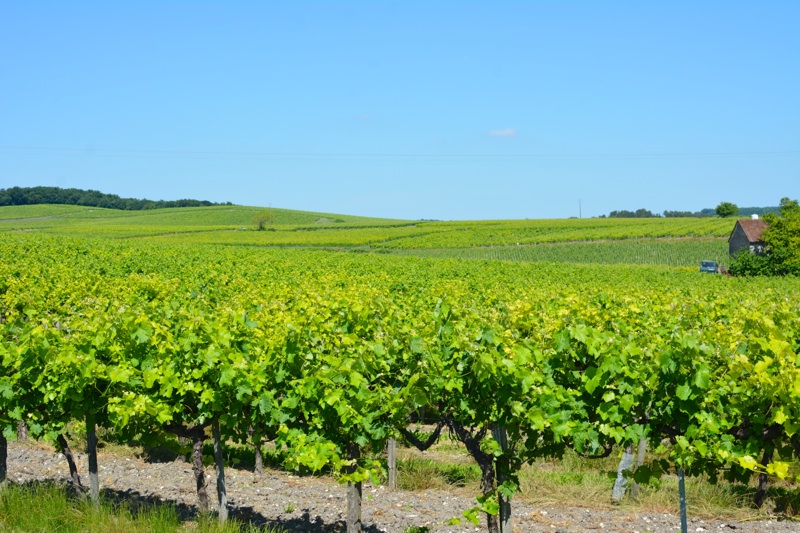 As previously mentioned, Cognac has an AOC {Appellation d’Origine Contrôlée} distinction and is strictly regulated. Not only must the grapes be grown in Cognac, but the spirit must also be produced in the appellation using a standard method. The Cognac Delimited Region is located southwest of Paris, just north of Bordeaux, north of the Aquitaine basin, and includes the islands of Oléron and Ré. There are over one million hectares in the appellation, with vineyards comprising around 75,000 hectares. Almost all of the grapes grown are used in the making of Cognac. 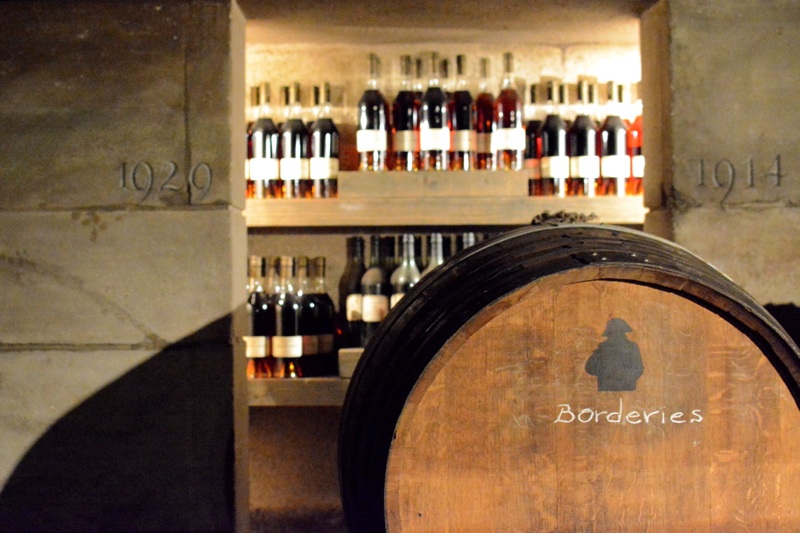 There are six crus {growing areas} that make up the Delimited Region: Grande Champagne, Petite Champagne, Borderies, Fins Bois, Bons Bois, and Bois Ordinaires. The areas were determined based on the soil characteristics. The two Champagne crus were named due to their chalky, limestone content, which is similar to the soil in the Champagne region. Some of the houses produce a product known as Fine Champagne, which is made by blending a least 50% Grande with Petite Champagne. The Borderies is the smallest cru, with only about 4,000 hectares. The three Bois crus have soil similar to Champagne, but have more of a red color.

Throughout the Cognac region, there are about 5,000 vintners growing white wine grapes for the sole purpose of producing brandy. Ugni Blanc is by far the most popular, but Folle Blanche and Colombard are also grown in limited quantity. Machines {a rarity in France} do the harvesting, normally during the month of October when the grapes are at their most ripe. Right after the harvest, the grapes are pressed and begin to ferment. As part of the AOC regulations, continuous screw presses and adding sugar are illegal. In addition, the fermented wine must be distilled by March 31st of the following year. 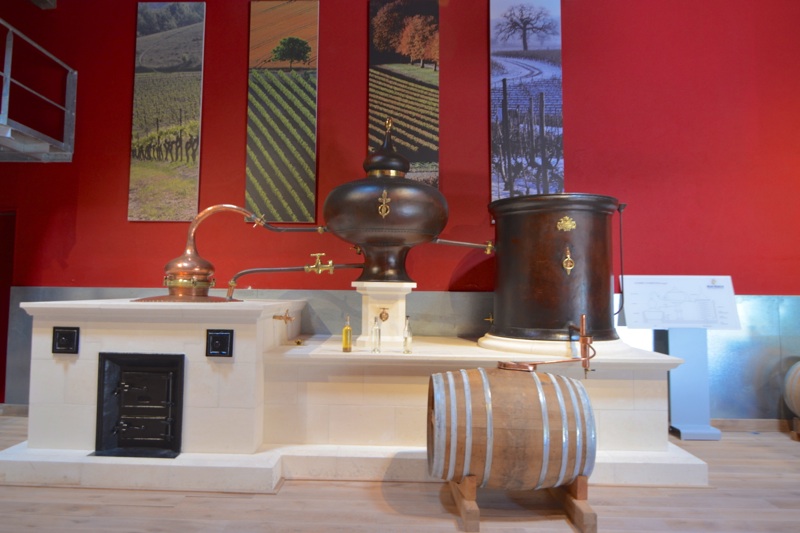 Known as the Charentaise method, the Cognac distillation process hasn’t changed since its inception. This two-stage process is carried out in a copper still and utilizes two separate heatings. The wine is brought to a boil and the alcohol vapors are captured and cooled, creating condensed liquid called brouillis, which is between 28-32% alcohol.

The second distillation {“the cut”} is tricky and must be carefully supervised by the master distiller. “The heads” are the first vapors that are released on the second boil and contain the highest amount of alcohol. They are reserved for use in the next batch of wine. Next comes the clear spirit known as “the heart,” which will be used to make Cognac. Once the alcohol percentage reaches 60%, the distiller eliminates “the second cut.” Each batch takes about 24 hours for distillation and runs day and night during the winter months. 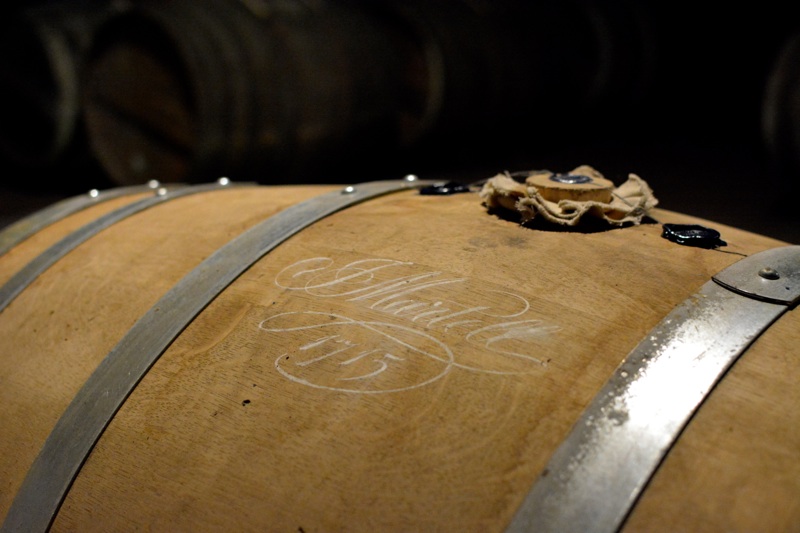 Once the eau-de-vie is distilled, it is put into oak barrels to age for at least two years, which is mandatory to be labeled as Cognac. Stored in dark, cool cellars, the spirit goes through extraction, hydrolysis, and oxidation as it ages. But Cognac isn’t Cognac until it is blended. This is the job of the master blender. Part chef, part artist, and part mad scientist, the master blender combines spirits from different crus that vary in age in order to create a desirable Cognac. 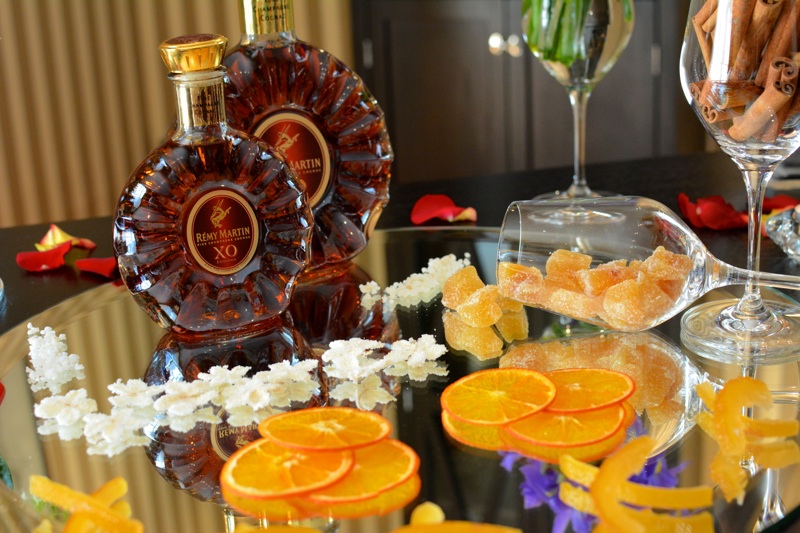 Like wine, Cognac is first experienced with the eyes and the nose. Colors vary from pale white to dark amber, while the aromas run the gamut. Flowers, fruits, spices, and even wood smells can be found in Cognac. 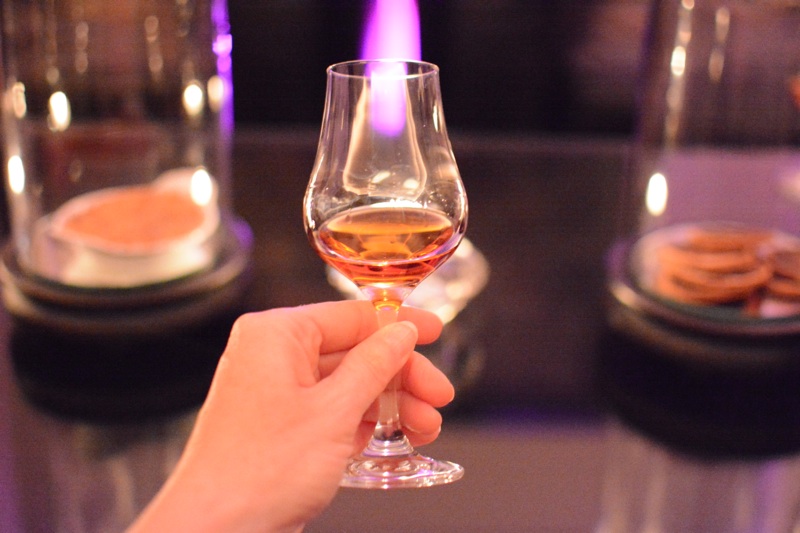 To taste eau-de-vie like a professional, pour about one ounce of Cognac into a tulip glass, allowing it to come to room temperature. Holding the glass by its foot, smell the Cognac. This is known the 1st nose. For the 2nd nose, slowly swirl the liquid to release the aromas. Against a white background, look at the color, then tilt the glass and notice the “tears” streaming down. To taste the most flavors in the Cognac, take a sip, but before swallowing, suck in a little air. This will help activate the taste buds in the mouth, allowing the various aromas to be experienced fully. 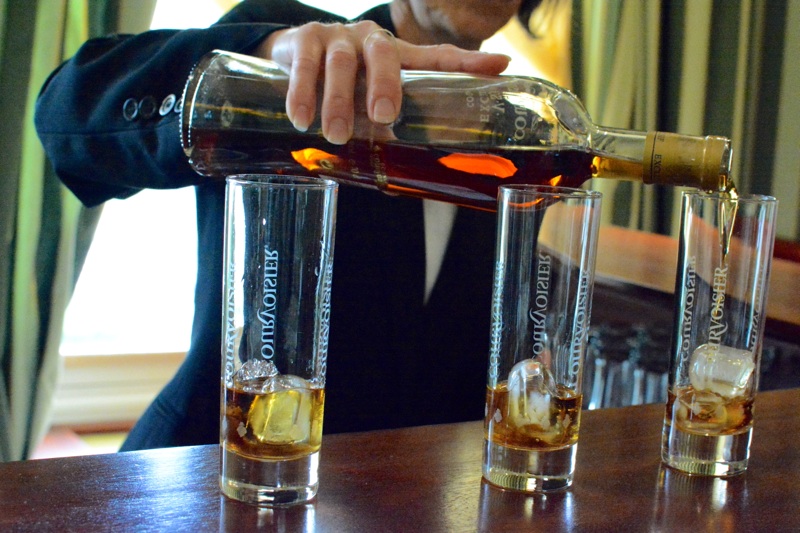 Whether served neat, mixed with water, or blended into a cocktail, Cognac is quite versatile. The three categories of Cognac are perfect for an aperitif, digestif, and also paired with food. Use V.S. {Very Special} ou*** in a cocktail like the sidecar or Cognac summit. V.S.O.P {Very Superior Old Pale} is best served over ice or with sparkling or still water. X.O. {Extra Old} should be drunk neat to fully appreciate the complex flavors that come with age. 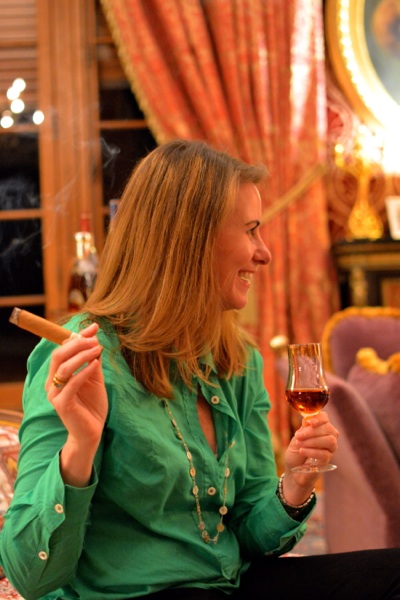 Through this intensive course, I came away with not only a new knowledge of Cognac, but also an appreciation and taste for the brandy. I see Cognac in a different light, and now find it even more difficult to place my order at the bar. There’s a Cognac for every taste, and just like wine and whiskey, it’s a matter of finding the one that suits you. 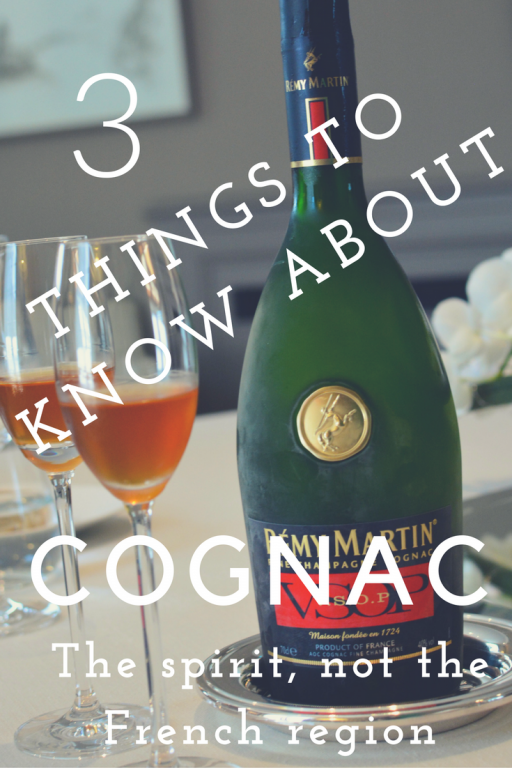 I was a guest of Atout France. In no way was I swayed to write a positive review based on the rare Cognac I tasted, the deer I hand fed from a chateau window, or the Michelin-worthy private meals I ate. As always, opinions are mine.