Inside of its glass dome sits a beautiful scene—city or countryside—the setting may change, but the premise doesn’t. The painted porcelain depicts a place I don’t want to forget. Settled at the bottom is a dusting of white with a bit of sparkle thrown in for good measure. It’s a little something that can easily be tucked inside of a suitcase and then set on a shelf as memento. Though, I’m rarely content to just let the globe be. Instead, I instinctively shake it like a carton of orange juice until the once-clear liquid is littered with white glitter. I’m memorized watching it wash over the scenery, before it again settles at the bottom of the globe. 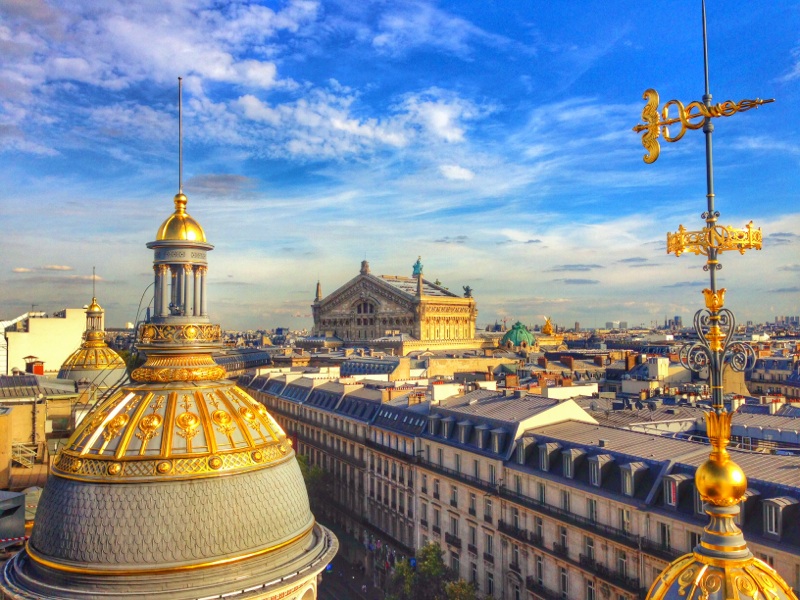 After being in France for six weeks, I grew accustomed to the French ways. Metaphorically speaking, the snow was comfortably resting on the bottom of my globe. Enveloped in the language, I instinctively responded to people in French, or at least whatever French I could muster. And thanks to my Bordeaux and Normandy trips, I started deciphering some conversations in French. I dressed simply in black, lowered my voice, and mastered the dainty double cheek kiss. I had a firm grasp on the metro system, as well as the stone-cold face required to survive it.

Yes, I was comfortably cruising along in my own little French world, until my flight landed in Venice. Walking into Marco Polo Airport felt like someone picked up my snow globe and shook the hell out of it. But it wasn’t someone who did the shaking. I did it on my own volition. 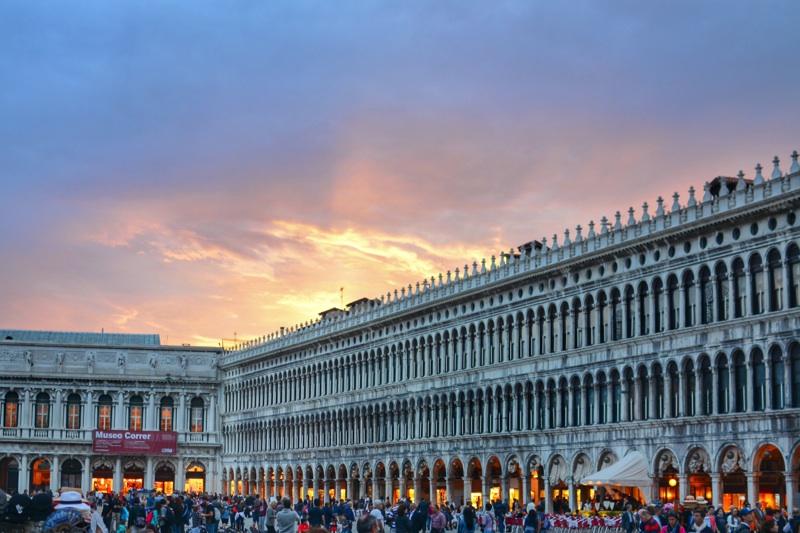 Bonjour became buongiorno and merci became grazi. The language change was just the tip of the iceberg. I’d flown a little over two hours and landed in what felt like a completely different world. This seriously messed with my head and took me a good three days to get acclimated. This wasn’t the first time I’d been in the country. I’ve always adored Italy—the culture, food, traditions, and even the crass catcalls and whistles. Something was different this time around, and honestly, I think I suffered a bit of culture shock. Black became white and up became down. I was befuddled.

Even though it’s a city of millions, I find Paris to be a quiet place. Of course, I’m not referring to the squeals of sirens or honking of horns. Instead, it’s the people who are quiet. Nobody speaks on the metro. Even packed to the gills during the evening commute home, it’s like a college library during finals. In restaurants, ‘inside’ voices are used and loud bursts of laughter are often met with cutting of the eyes from fellow patrons. In France, I can always identify the tourists…because I can hear their entire conversations. It’s annoying, and I now find myself peering at offenders like a Parisian. 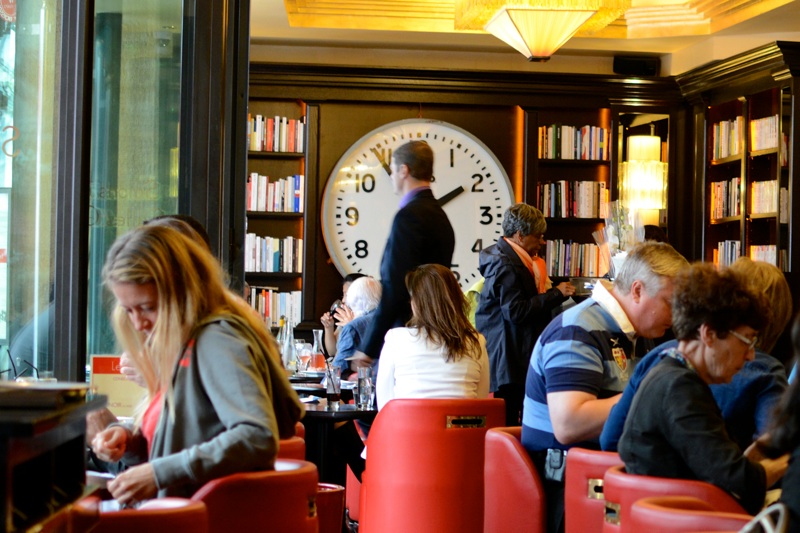 The rules are simple when in Paris. Strangers aren’t smiled at. Ever. Gregariously speaking with your hands is something only crazy people do. Hugs of any kind aren’t acceptable. A prim and proper kiss on each cheek is all you’re allowed. To make things even more confusing, these rules don’t necessarily apply to the rest of France, except for hugging. And despite my natural tendency for giving big, chest-to-chest bear hugs,  I’ve now been conditioned to the French way.

Italians, on the other hand, are the antitheses of the French, with the exception of the double cheek kiss. But even in their kisses, Italians do it with more passion and gusto. It’s not some sort of ass-out, air kiss like the French. Italians smiles are broad, even to strangers. Voices are loud–like seriously loud. During the first two days in Venice, I thought everyone was angry with one other. Several times I even found myself shouting over my sardines just so the waiters could hear me. 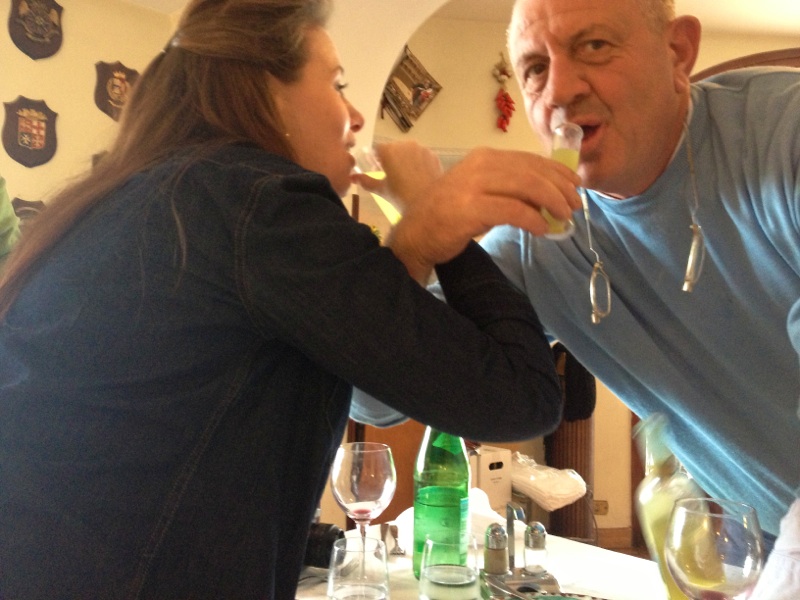 When speaking, Italians move their arms more than a symphony conductor. And expecting them not to talk with their hands is like asking water not to be wet. It’s just impossible. Overtly passionate are the Italians, which is something I truly love about the country. There’s no need to decode how they’re feeling. It’s obvious to anyone within shouting distance. This is the antithesis of the French way.

Arguably, Paris and Milan are the epicenters for fashion in the world. There’s a mile-long list of acclaimed French and Italian design houses, and like two heavyweight champion contenders, they go head-to-head for supremacy. Countless books and articles have been written on how to dress like a Parisian or feel confidently sexy like an Italian. It may sound cliché, but French and Italian style is aspirational, but they are distinctively different.

After six weeks of seeing a sea of sleek black outfits topped with scarves tied a bazillion different ways and hipster glasses, it’s a refreshing change of pace to see color and patterns. Don’t get me wrong. I love the sophistication of a black outfit like little else, but there’s just something about Italian style that is fun and a bit less serious. 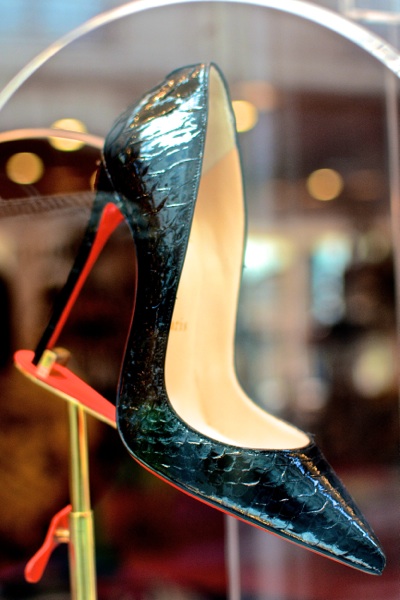 The other night after a heaping bowl of Venetian seafood spaghetti, I strolled through the alleyways around Piazza San Marco, where I happened upon the Moschino store. In one of the windows was a purse that looked like a revolver inside of its holster, and in another was an entire capsule collection inspired by Sponge Bob Square Pants and McDonald’s. I realize that there are plenty of classic Italian designers {Giorgio Armani} and that Moschino is at the far left of the Italian fashion spectrum, but can you imagine putting such a thing in Chanel’s window on rue Saint-Honoré? God, I hope not. 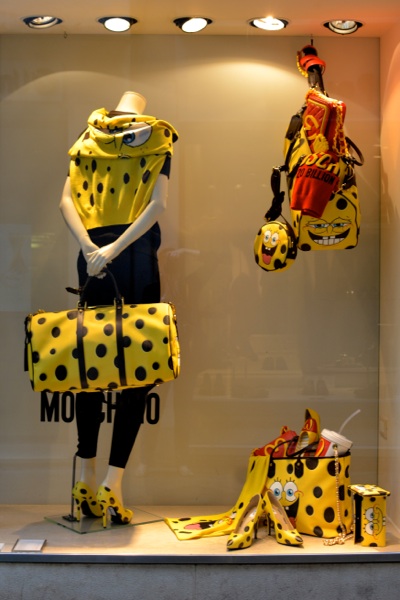 It’s not just the style of clothes that differentiate the French from Italians; it’s the way they’re worn. French women tend to be a bit more modest, but certainly not in a Saudi Arabian sort of way. Maybe there’s an extra blouse button left undone, a leg peeking out of a skirt slit, or a shirt slipping off the shoulder. In general, their style of dress is sexy in an understated sort of way.

Italians, on the other hand, are more overt. Skirts are shorter and necklines lower. Everything is tighter, no matter the body shape. Hello, Donatella Versace? Let me put it this way: I’ve seen more cleavage in my few days in Venice than I saw in six weeks in Paris, and I was there for fashion week! 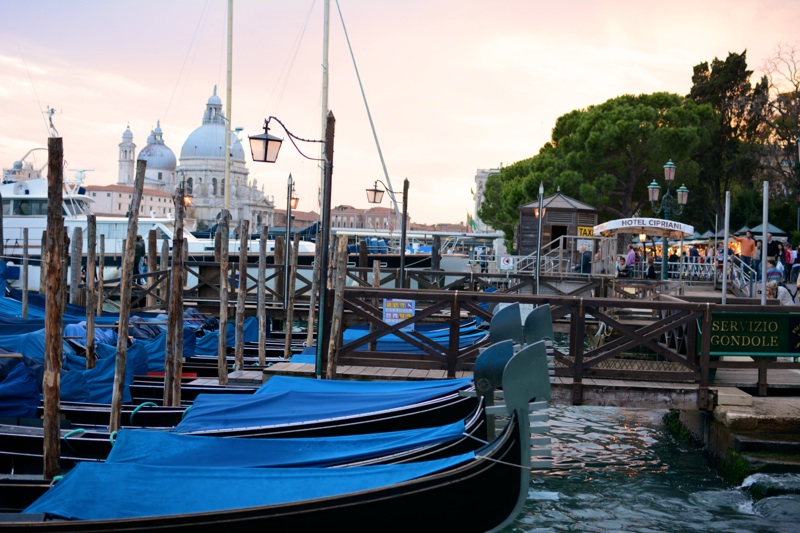 I’m drawn to both Italy and France, but for different reasons. I notice, appreciate, and celebrate the differences between the two countries. One is not necessarily better than the other. It’s simply a matter of preference {and I think everyone knows mine}. Though, it perplexes me how two countries sharing the same border can be polar opposites in so many ways.

That’s actually one of the reasons why I love Europe so much. For me, the continent is like a Whitman’s sampler of assorted chocolates. I can take a bite of the white chocolate, and if I don’t like it, I simply move on to the English toffee square. No big deal. However, France and Italy are the cherry cordial and cashew cluster of the sampler, the two pieces that I reach for first. 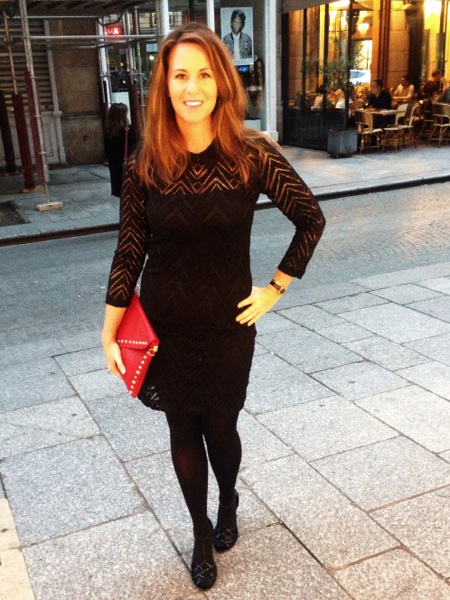 I’ll be in Italy until the end of October, where I’m sure to have conversations at a high volume. I’ll most likely use lots of hand gestures, with a big smile on my face. I may even give a hug or two, just for old-time’s sake. And when I return to Charles de Gaulle Airport, I’ll revert to my adopted French decorum, and again, my snow globe will become cloudy.