Welcome to the second edition of Franco-Files, the series where I share some of my favorite address from my travels around France {read the 1st edition}. There’s a little something from Provence, Normandy, Cognac, and Brittany, but shockingly, nothing from the City of Light. Sorry, fellow Paris lovers. I’ll do better next time. 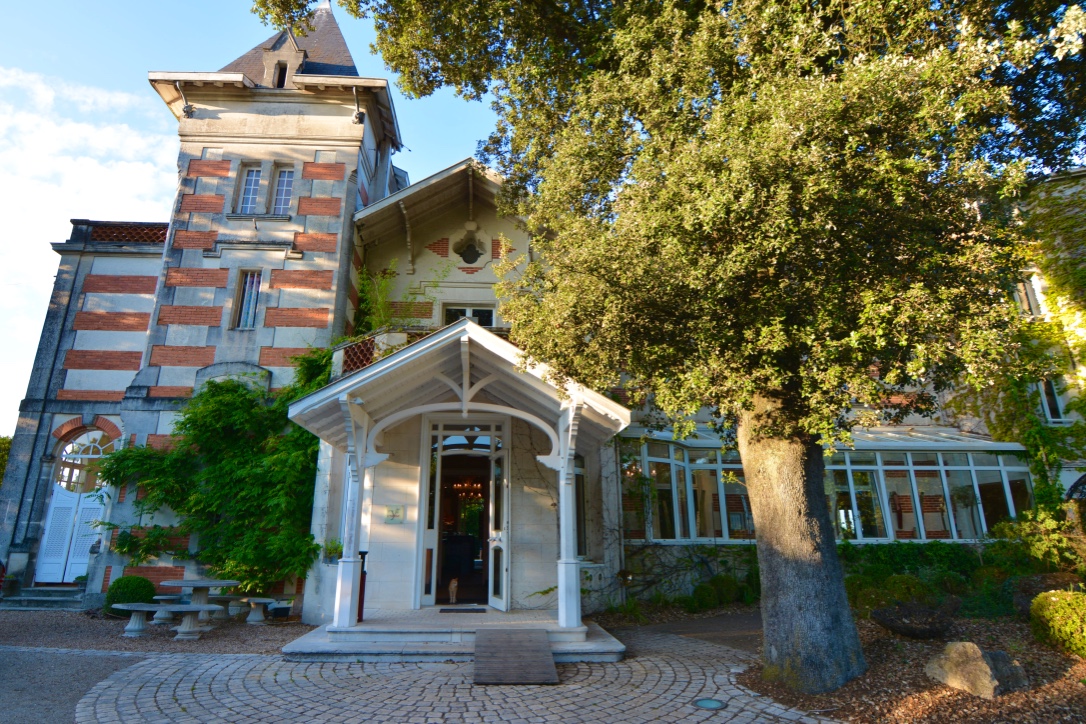 Tucked away in the Poitou-Charentes region in the southwest of France is Châteaux de L’Yeuse. This 19th century hotel sits in the outskirts of Cognac, overlooking the Charente Valley and its villages and vineyards. Owned and operated by Céline Desmazières, the property is the perfect base for exploring the underrated Cognac area. 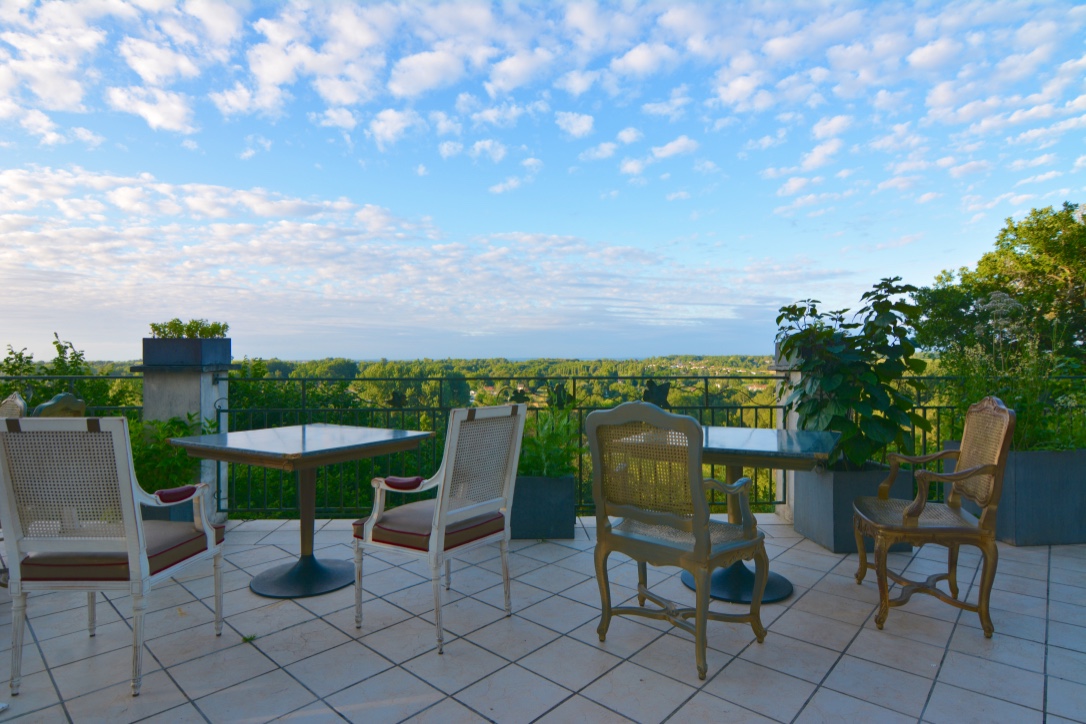 A nice combination of comfort and elegance, L’Yeuse feels like a private residence, but with the perks of a four-star hotel. Rooms and suites are large and decorated in classic French style, but it’s the common areas that stand out most. A large, sweeping terrace with views over the river and valley is perfect for an alfresco breakfast or pre-dinner cocktail. 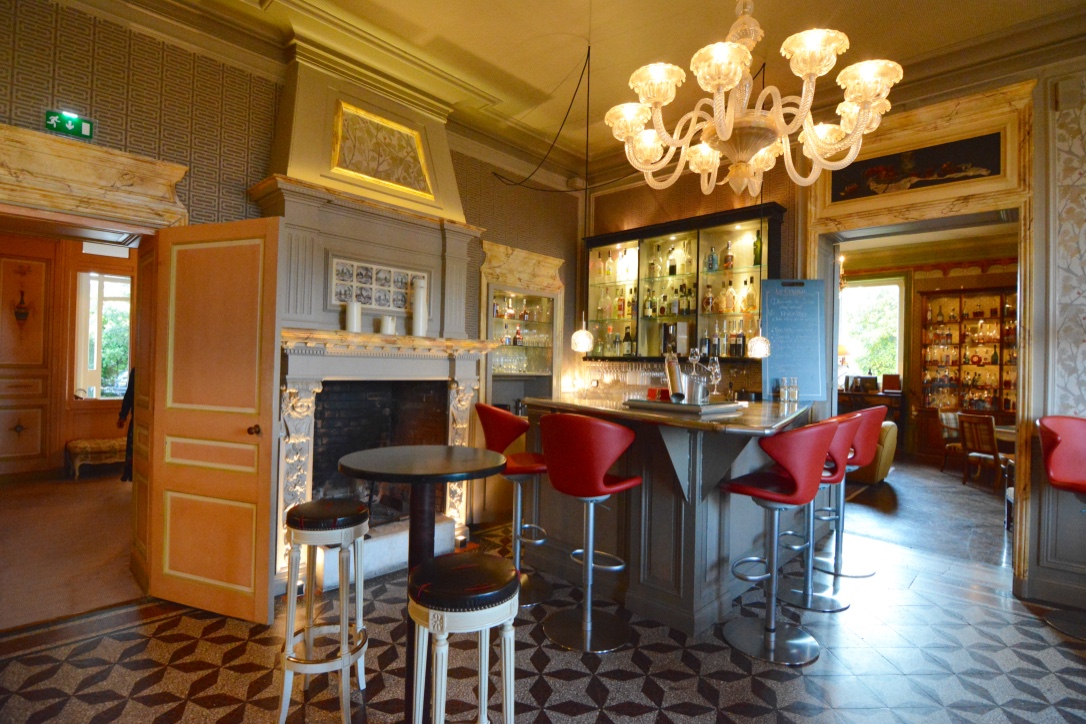 In the summer, bask in the sun while enjoying the large pool and its verdant surroundings. During the winter, cozy up next to the fire in the Cognathèque with a Cognac and cigar. In contrast to the traditional décor in the rooms is the modern La table de l’Yeuse. This gastronomic restaurant led by chef Cédric Coulaut is among the best in the area, utilizing local ingredients for its seasonal menus. 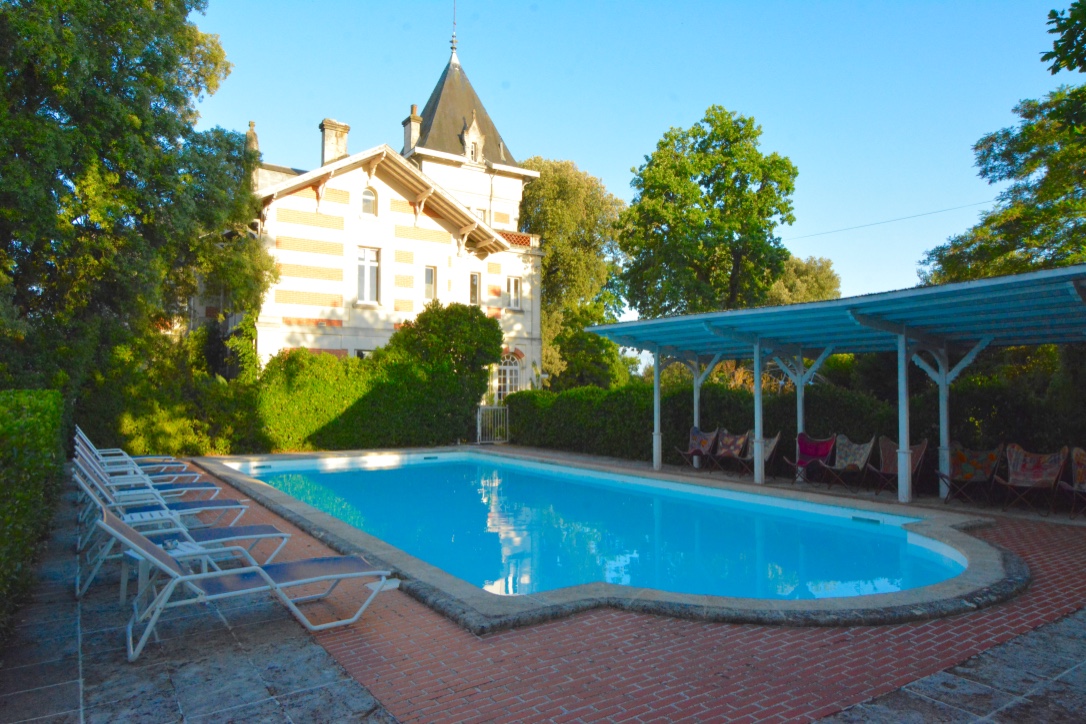 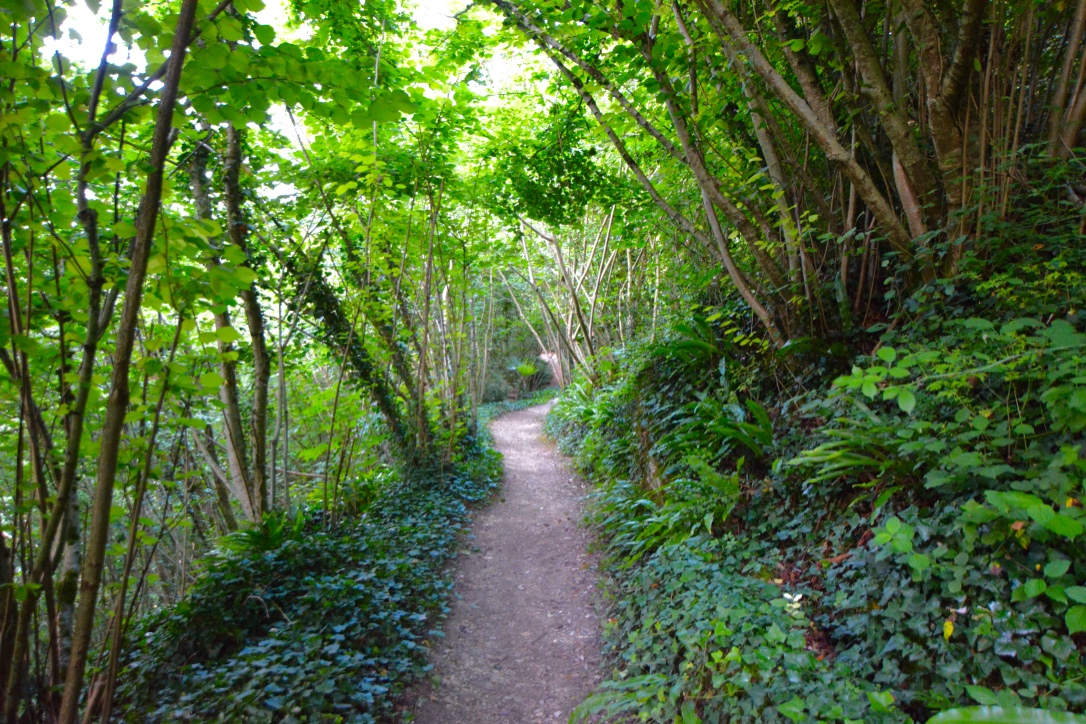 The jewel in the crown of the hotel is the Jardin Respectueux. On the hillside below L’Yeuese, landscape architect, Rémi Marcotte, has designed the Respectful Garden with the philosophy of maintaining biodiversity, planting native species, creating compost and conserving water. Not just a beautiful environment, the garden is also educational. Plants are labeled; there’s a spot to bird watch; a beehive produces honey; and organic vegetables and herbs are grown for the hotel’s restaurants. Reclaimed materials are used to create family-friendly gathering points and art pops up in unexpected places. Châteaux de L’Yeuse , 65 rue de Bellevue – 16100 Châteaubernard, Cognac, France 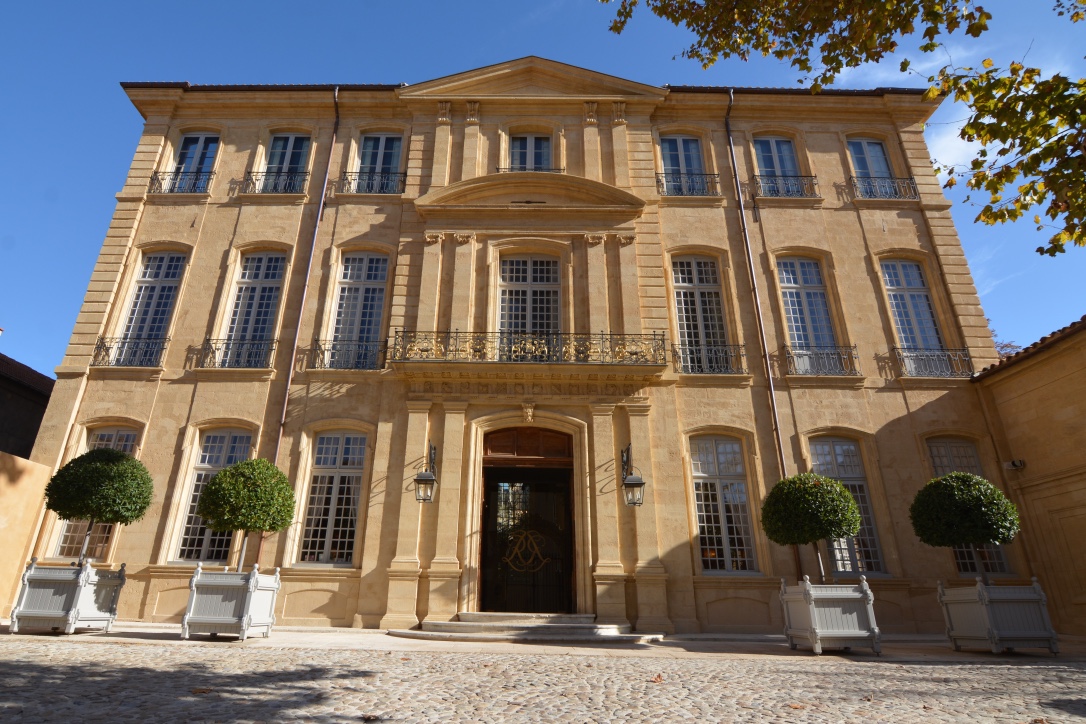 While in Aix-en-Provence, be sure to visit Hôtel de Caumont, located in the city’s Mazarin district. Before opening as the Caumont Centre d’Art in May 2015, the 18th century hôtel particulier has been owned by a handful of aristocratic French families, was used by the postal service and served as the home of a music school until 2013. During the €12.6 million restoration, artisans and historians painstakingly returned the façade, interior and gardens to their original glory. Black and white photos of the renovation are seen throughout the museum. 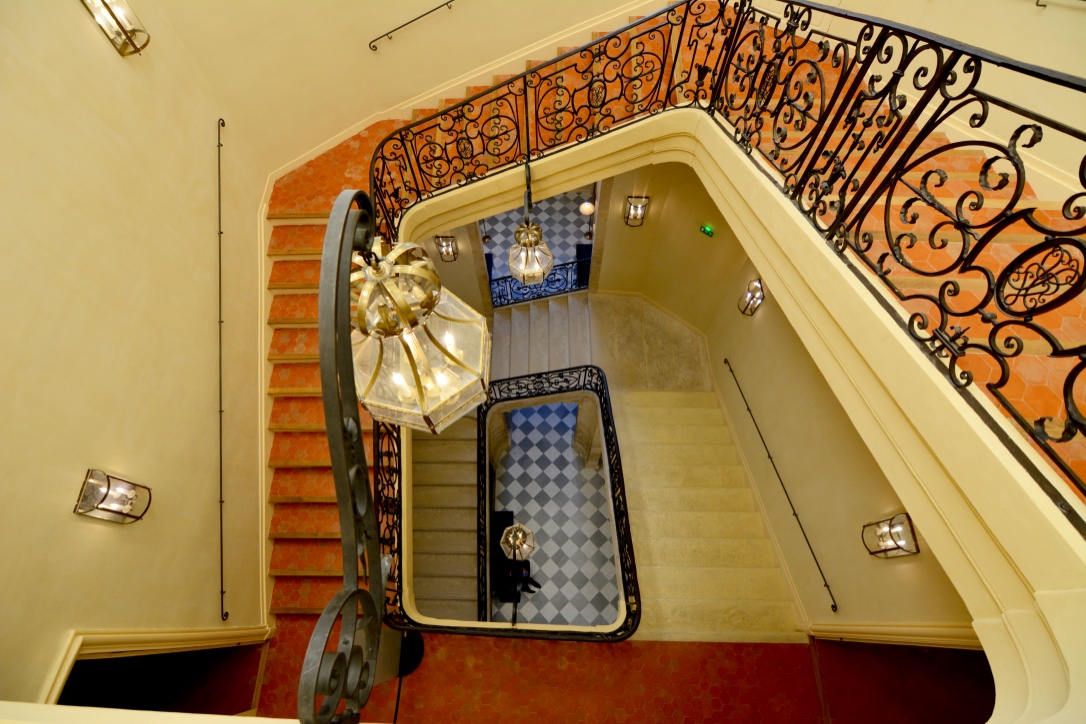 Two annual temporary exhibitions feature the world’s best artists, from ancient to contemporary. Exhibits are located in eight rooms on the top two floors. Showing until March 20, The Collections of the Prince of Liechtenstein feature art by Raphael, Rembrandt, Vernet, among other notable names. Beginning May 4, works by Joseph Mallord William Turner will be presented. In addition to the exhibitions, visit the 18th century music room and bedchamber, as well as watch the 20-minute film featuring Paul Cézanne and his life in the Aix region in the 100-person auditorium. 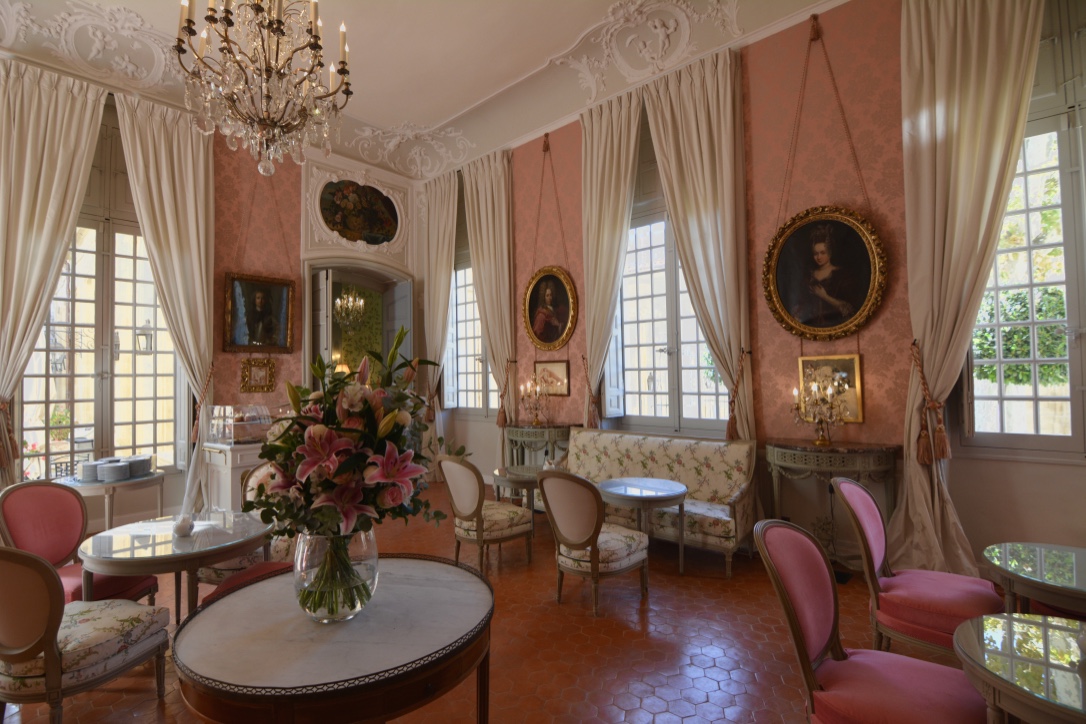 Save some time for breakfast or lunch at Café Caumont. On a nice day, the terrace overlooking the private gardens is a real pleasure, as is one of the elegant dining rooms. Don’t pass on dessert; one look at the display and you’ll see why. At Lounge Caumont, enjoy an evening aperitif. Caumont Centre d’Art, 3 Rue Joseph Cabassol, 13100 Aix-en-Provence 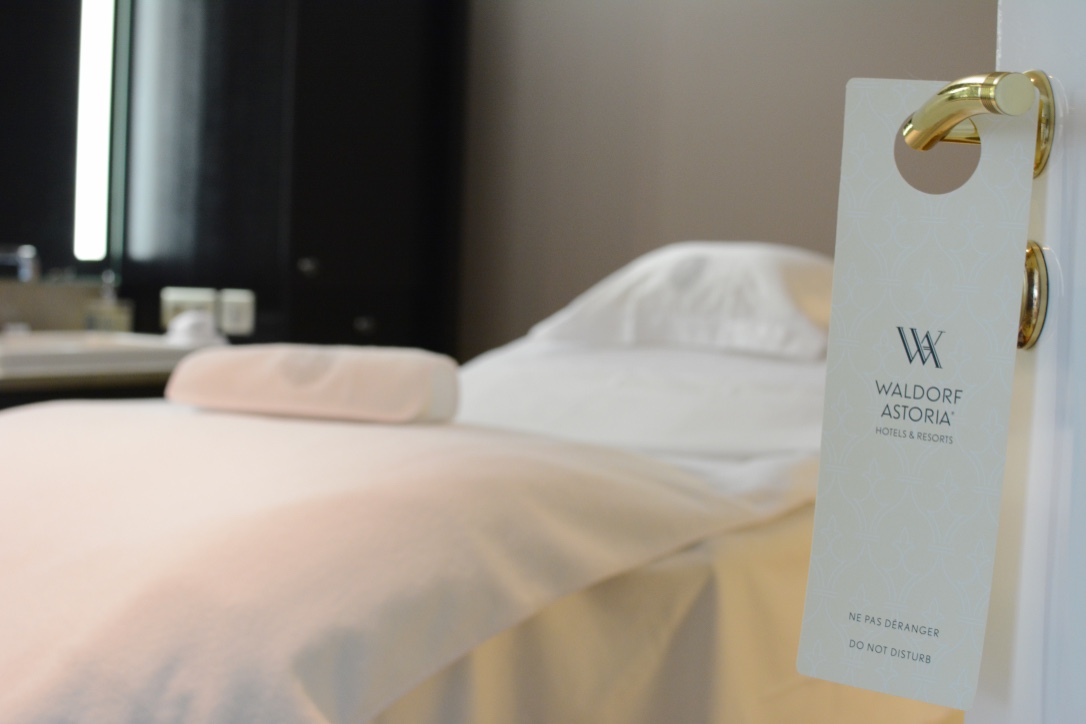 If you ever wanted to channel your inner-Marie Antoinette, a spa treatment at the Trianon Palace Versailles will do the trick. This Waldorf Astoria Hotel is just a stone’s throw from the famously beheaded queen’s former abode. With 30,000 square feet, 14 treatment suites, hammam and steam rooms, the Guerlain Spa is worthy of royalty. 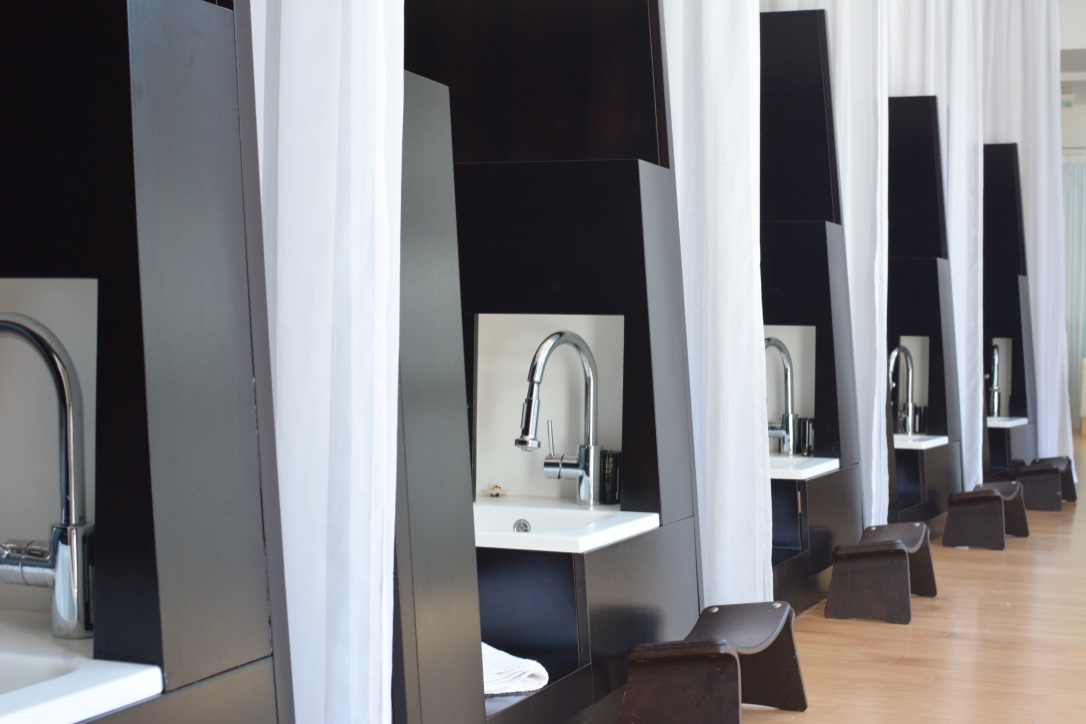 Bright and airy, the spa overlooks the swimming pool, allowing for the maximum of natural light. Roman columns, white sheer curtains and modern design create a soothing and chic ambiance. A row of sleek, black banquettes line one of the walls where pre-treatment foot baths are given. Choose from an indulgent menu of therapies that include facials, massages and body treatments, all of which are customized to your needs. Trianon Palace Versailles, 1, Boulevard de la Reine, 78000 Versailles 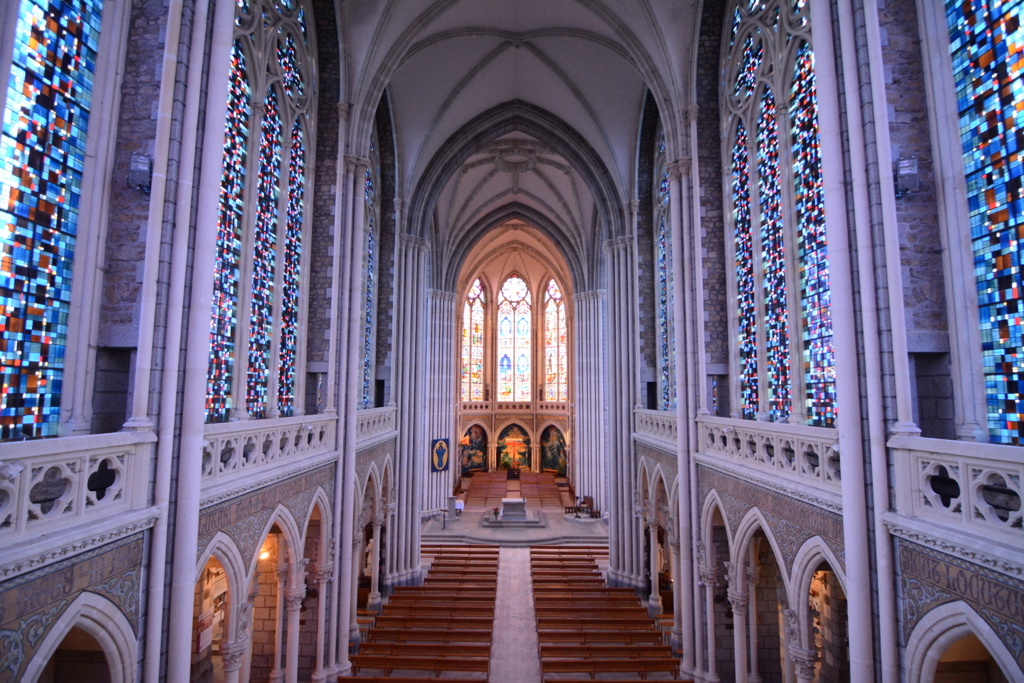 In Pontmain, a village of less than 1,000 people, is a stunning 19th century neo-Gothic basilica that draws thousands of pilgrims each year. Relatively unknown, even in France, Pontmain was the location of an apparition of the Virgin Mary on January 17, 1871.

Only seen by a handful of village children, the Virgin Mary appeared in the sky for three hours. Wearing a blue dress adorned with stars, a black veil, a golden crown and holding a red cross, the Virgin Mary called the children to pray, giving messages of hope. 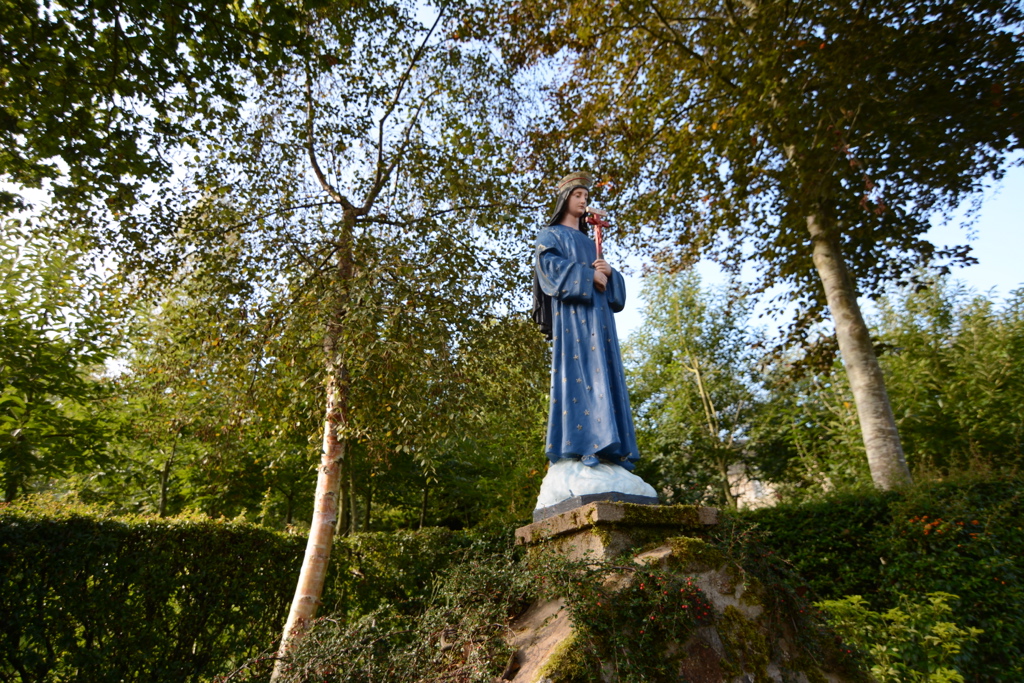 Today, visitors can attend mass in Our Lady of Pontmain several times per day and see the restored chapel. It’s also possible to visit the unchanged barn where the Virgin Mary was seen nearly 150 years ago. On February 11, Our Lady of Lourdes Pilgrimage brings the ill, handicapped, elderly and caregivers for a day of prayer and blessings. Our Lady of Pontmain, 3 Rue Notre Dame, 53220 Pontmain

Leave it to the French to turn a baking mistake into mind-blowing deliciousness. In a village in Finistère, located in far west Brittany, Kouign Amann supposedly first appeared in the mid-1800s. 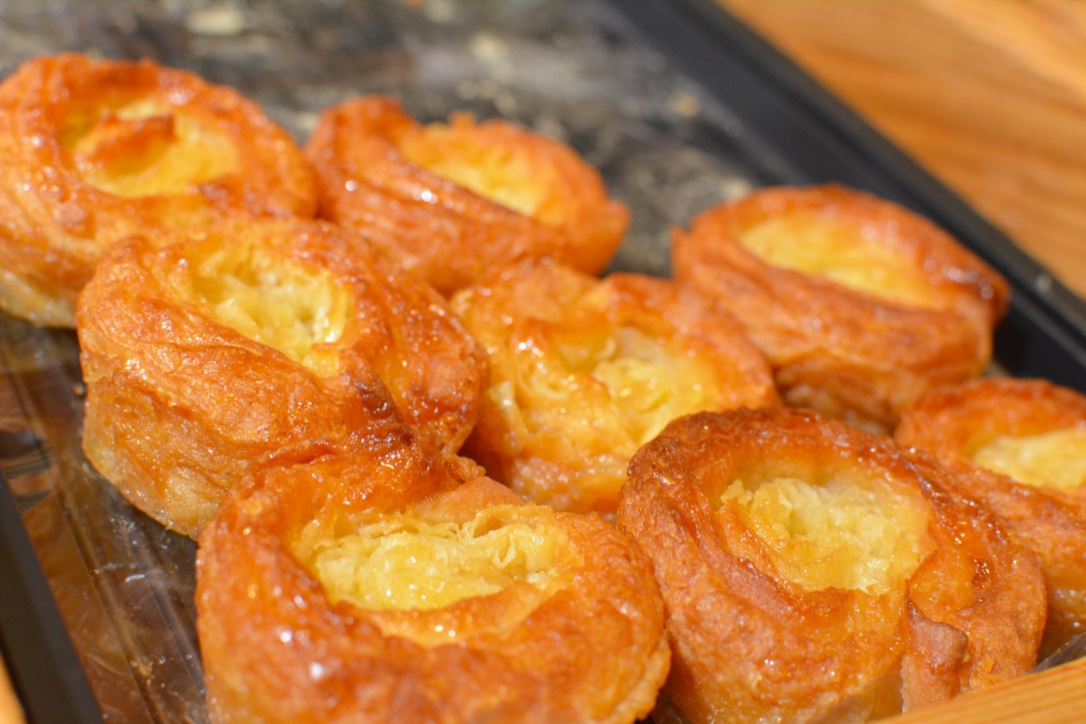 Meaning ‘butter bread’ in English, Kouign Amann is aptly named. A hybrid of the strudel and croissant, this rich pastry is multiple layers of brioche dough, butter, and sugar. The layers are placed into a large, round cake mould. It’s then baked slowly until the sugar caramelizes. Eat it warm with a nice glass of brandy to cut the sweetness. The Kouign Amann is found throughout Brittany in a variety of flavors such as salted butter caramel, chocolate and pistachio, but I like the original best. Try Kouignettes, a two-bite version that won’t totally destroy your waistline. Found in bakeries throughout Brittany 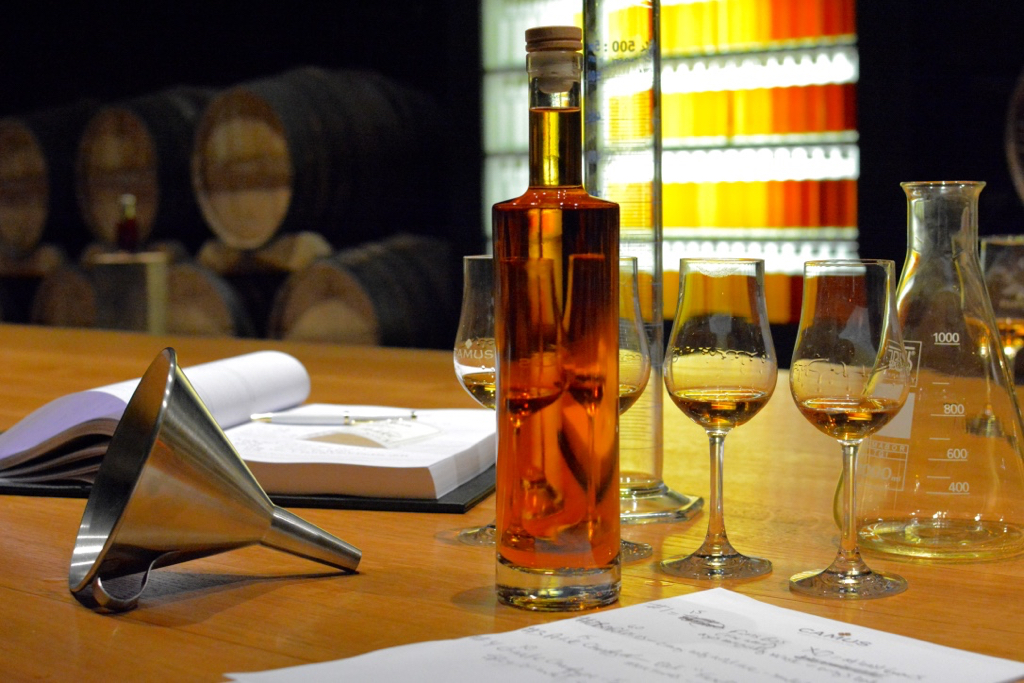 Think Cognac is just for old men smoking cigars and rap stars? This absolutely isn’t the case, as  I learned during my trip to Cognac {read my article about the French spirit}. For five days I traveled around the Cognac region, visiting vineyards, coopers, and of course, Cognac producers. One of my favorite experiences was blending my own brandy at CAMUS. 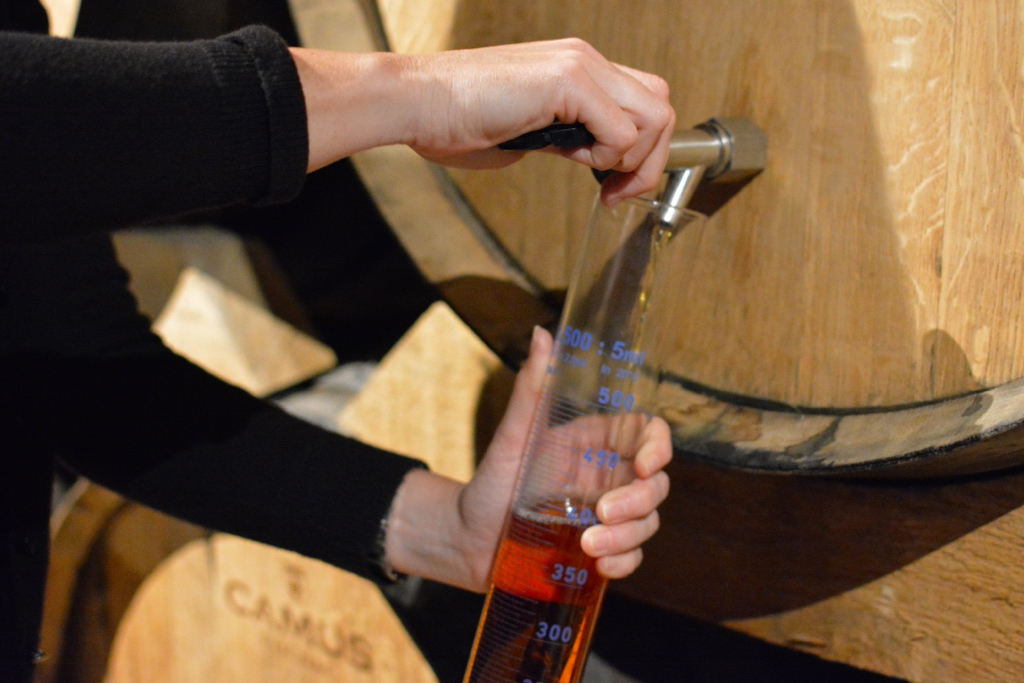 Like a delicious science class, beakers and funnels are laid out, along with a series of small tulip glasses used by professionals. Samples of brandy from the Fins Bois, Borderies, Petit Champagne, and Grande Champagne regions are poured and tasted. The master blender is there to guide, but ultimately, it’s personal preferences that determine your blend. 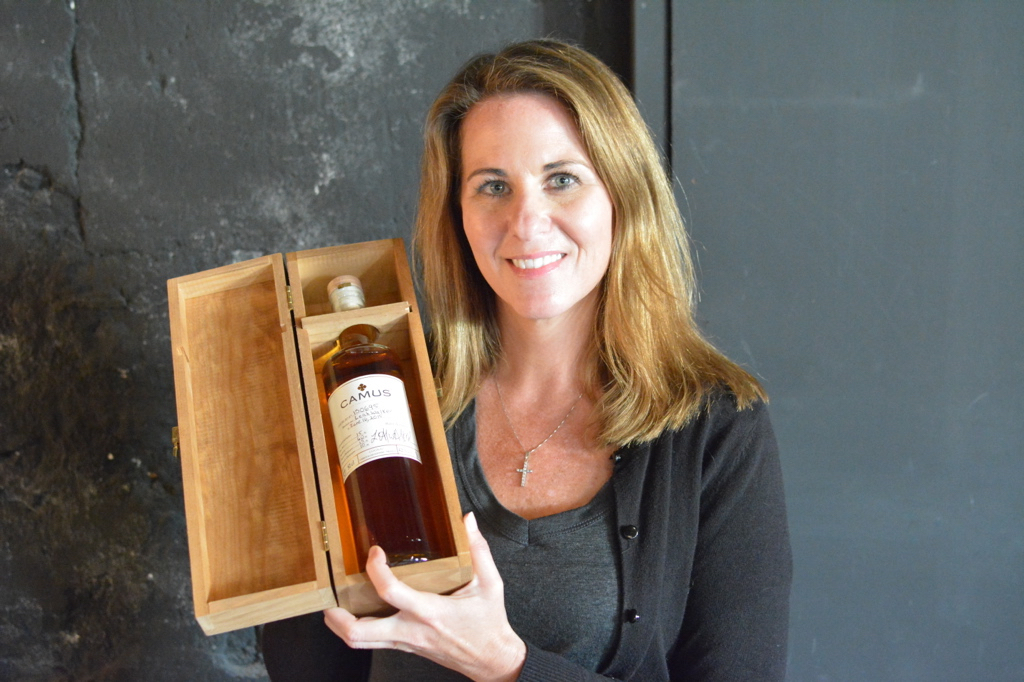 After drawing the brandies from their oak barrels, your Cognac recipe is logged and given a unique number. Then it’s poured into a 50 cl bottle, with a custom label affixed. In three years, your XO Cognac is ready to drink. CAMUS keeps the recipe on file, just in case you’d like to reorder. Price for the master blending class is €160 per adult. CAMUS, 21 rue Cagouillet BP19 – 16100 Cognac