In July, I visited France’s Loire Valley in my role as a French wine ambassador for Atout France. I traversed across France’s Garden in search of some of the country’s best wine. From Nantes to Saumur to Tours to Sancerre, I discovered the diversity of wines from this region. Although there was a lot of tasting involved {see my itinerary}, my trip wasn’t just about drinking the vin. Here are five unique things to do in the Loire Valley.

Ride a Vintage Bike at Bouvet-Ladubay 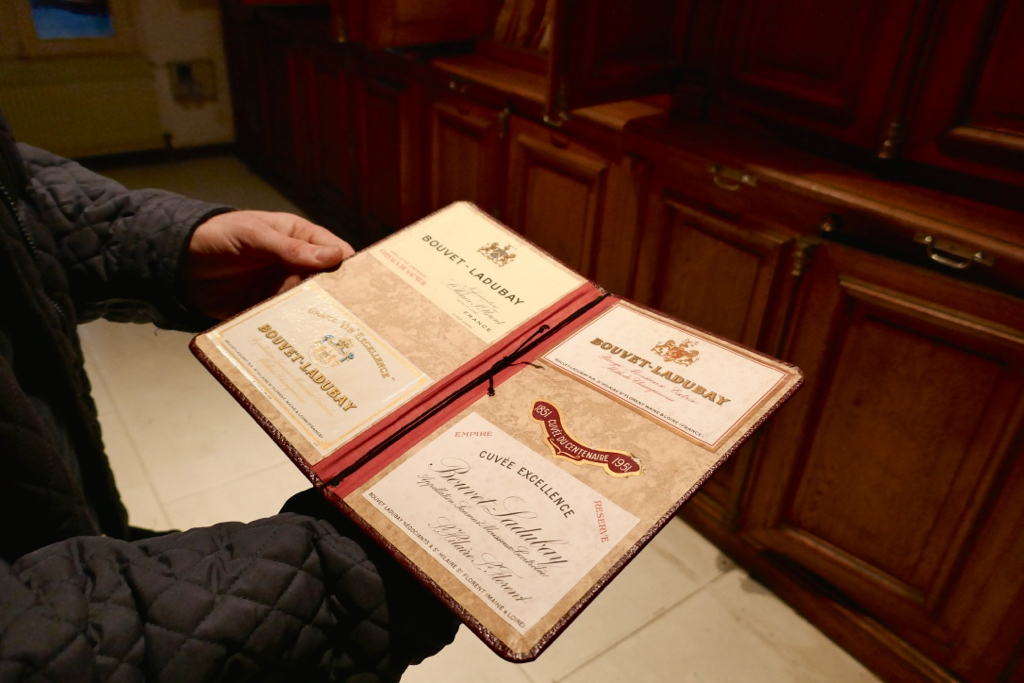 In the town on Saumur, you’ll find Bouvet-Ladubay and its sparkling wines. Beyond the bubbles, the cellar tour is unlike any other I’ve taken. Before going subterranean, tour the domaine’s archives designed by Gustav Eiffel. The floor-to-ceiling wooden drawers are filled with old personalized labels. The brand used to provide customized labels to its clients, which were affixed by women using crêpe batter. Hand-written order ledgers can be flipped through, and the founder’s office remains as it was decades ago. 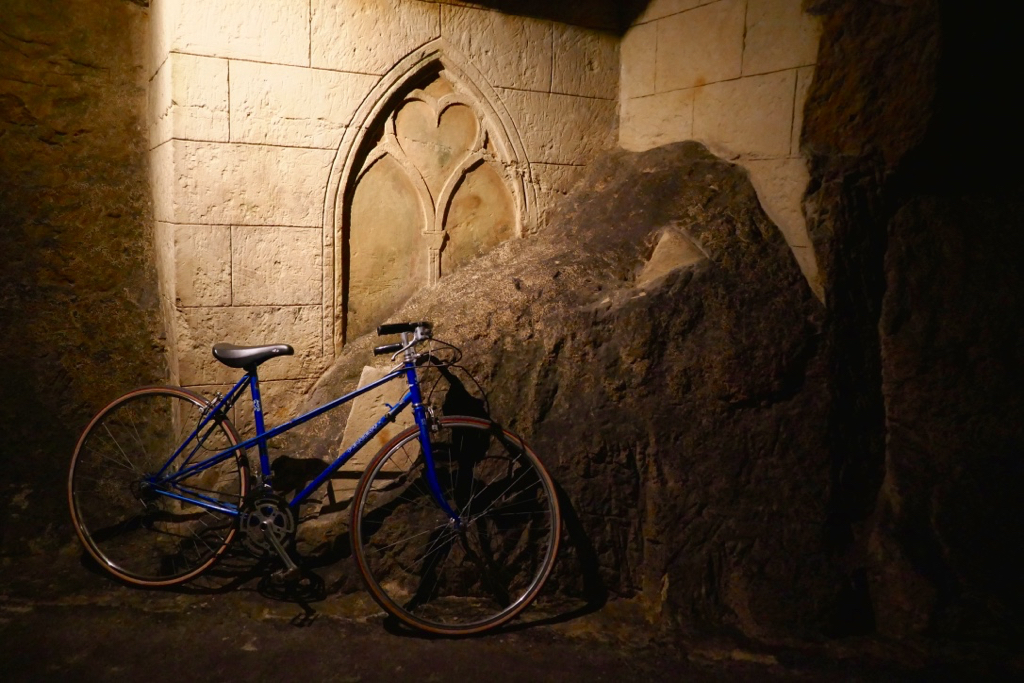 After, choose a vintage bicycle, put on a headlamp, and take a ride though the five-kilometers of ancient tunnels. The cellars are located above the St. Florent Abbey ruins, which date to the 11th century. The 19th-century excavation of tuffeau limestone beneath the abbey, which was used to build many of France’s buildings and monuments, created the tunnels. Some say that this limestone was also used in the foundation of the Westminster Royal Abbey in London. While riding through the tunnels, learn about the various stages of wine making and see more than 1,000 oak barrels, as well as ancient sculptures. 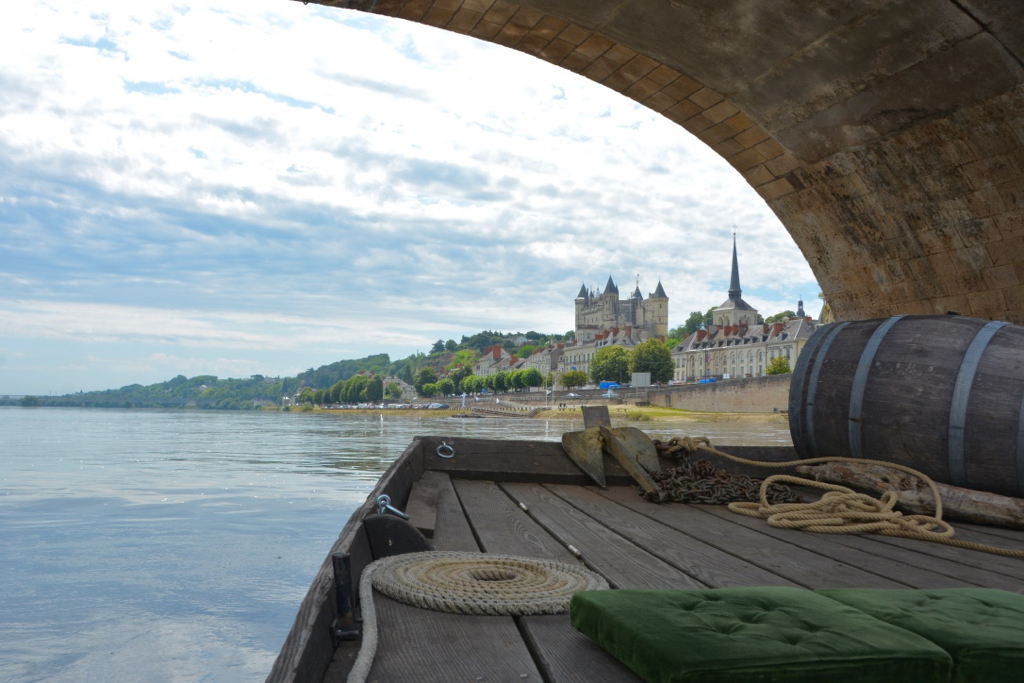 In the beautiful town of Saumur, take a lunchtime cruise on the Loire River with Denis Retiveau, the owner of a wine domaine and boat captain. For about two hours, cruise with Loire Vins Adventure along the shallow waters in Denis’ traditional Loire boat. Saumur and its captivating castle drift by at a leisurely pace, while you indulge on locally produced food specialties and drink the full range of Denis’ wine. Whenever possible, I always try to see a destination from the water, because it offers a different perspective.

Fly above the Loire’s Châteaux in a Bi-Plane 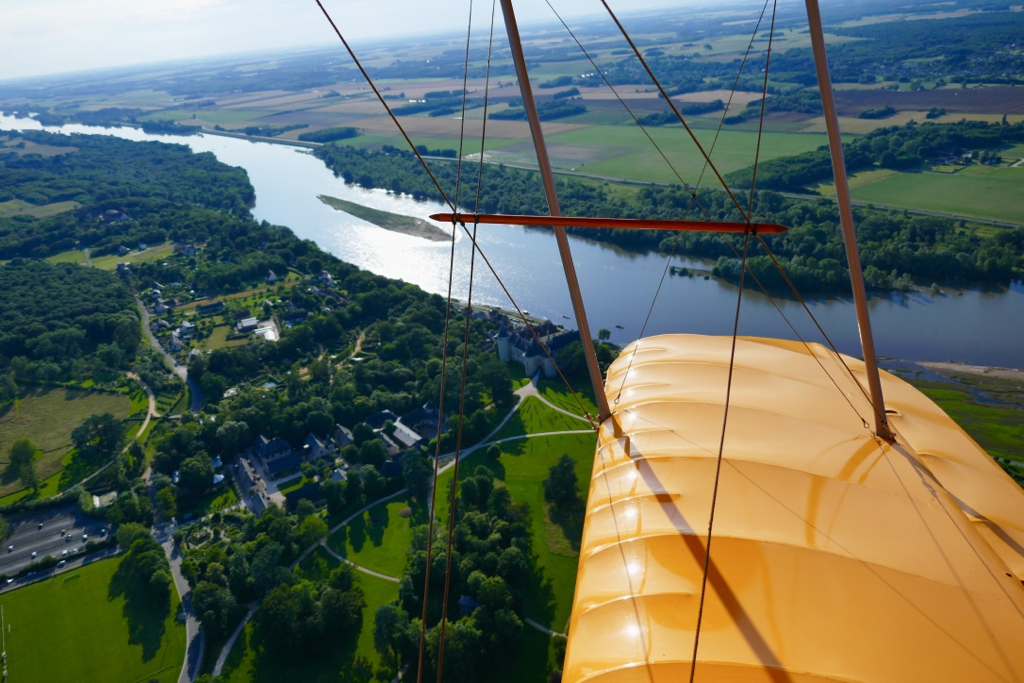 Flying over the Loire Valley’s Châteaux in a hot air balloon is quite common, but what about doing it in a bi-plane instead? Channel your inner Red Baron by donning a jumpsuit, vintage leather cap, and climbing into a World War I bi-plane with Patrick Plançon, the owner of Vol en Biplan. Soar high above the verdant landscape of the Loire, taking in the awe-inspiring views of the river, fields, and châteaux. As the wooden propeller turns and the motor hums, the scenery envelops you. Choose your flight path and just try to remove the grin from your face once you land.

Sleep in a Troglodyte 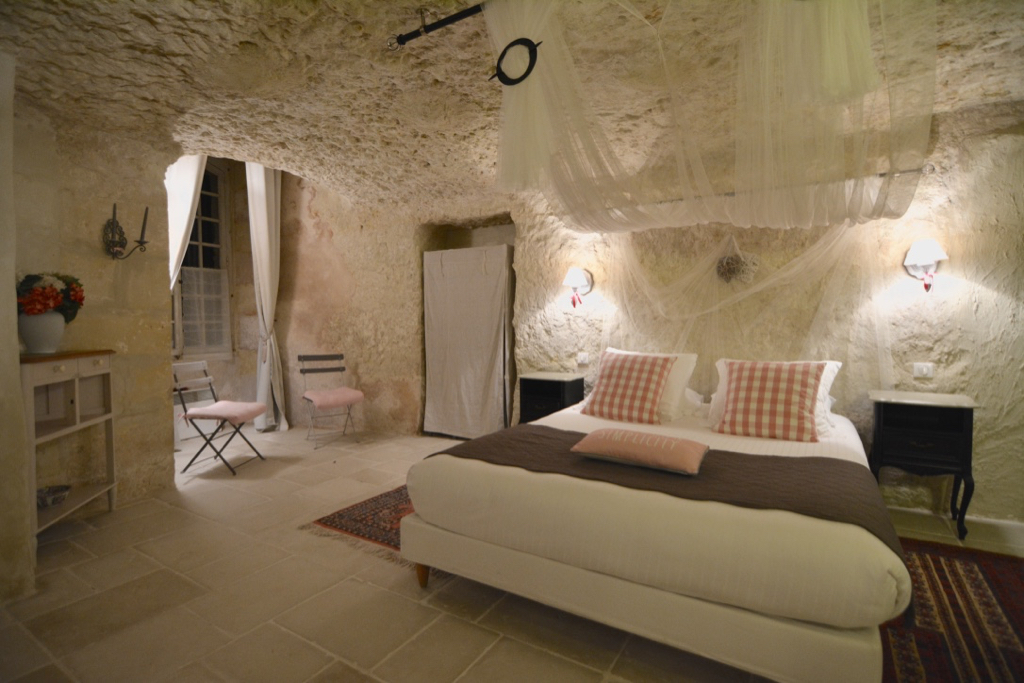 The Loire Valley is filled with caves known as troglodytes, which were created from quarrying tuffeau limestone in the 11th century. Many people created homes in these caves and lived in them until the early 20th century. Although some are still lived in, many were turned into wine caves, since they keep an even temperature. As a visitor to the Loire, you’re not just relegated to discovering the troglodytes with wine tours. 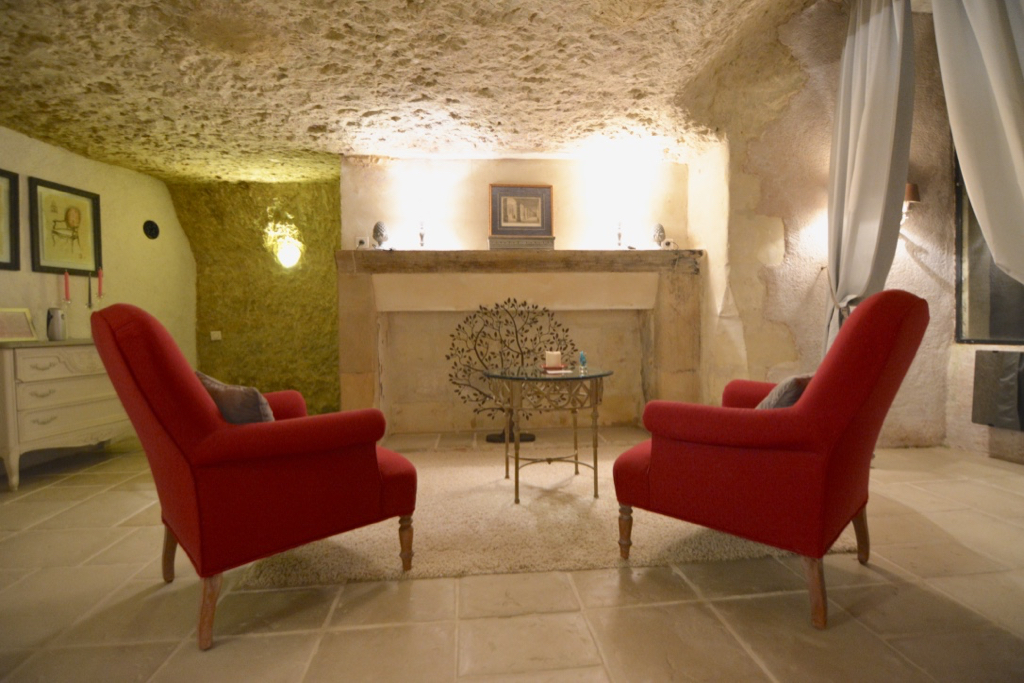 At La Bagatelle Guest House in Vouvray, you can sleep in a troglodyte. Louis XV’s royal tax collector built the main house near the Touraine Vineyards and Loire River in 1755. The front of the house is surrounded by a beautiful garden. The rear of the house backs up to a limestone hill, where there are two troglodytes. Originally used as homes for the domestic help, they’ve been transformed into two junior suites. It’s a very cool and unique experience, but beware of the humidity {my MacBook Pro’s keyboard didn’t like it much}. Enjoy a gorgeous breakfast in the main house prepared by the lovely owners, Anne and Bertrand.

Walk through a Cave Illuminated with Art 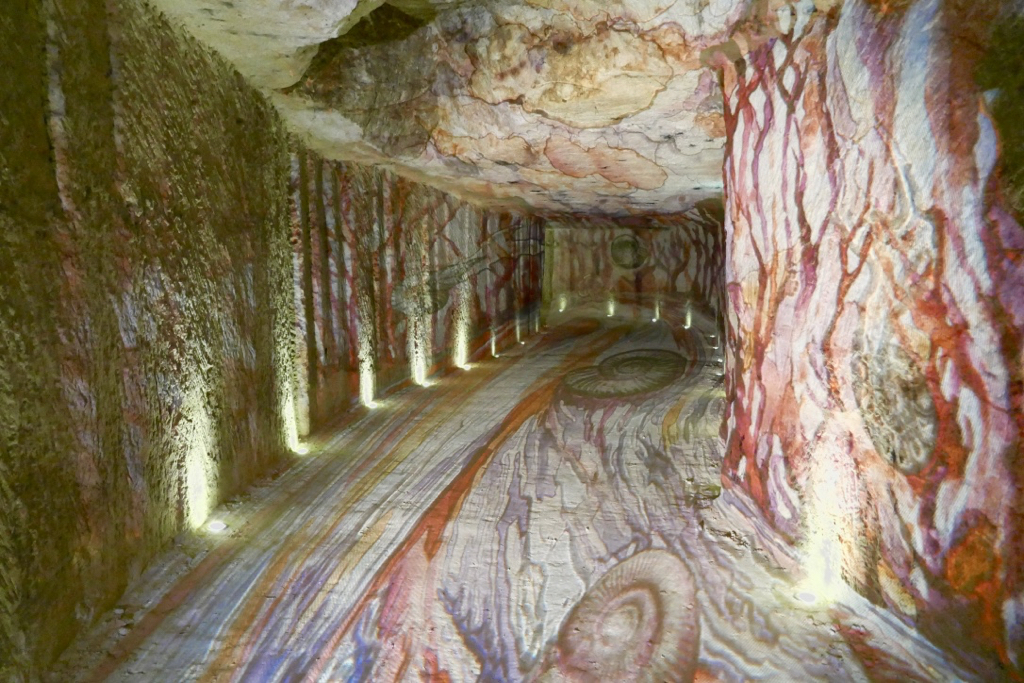 During the French Renaissance, the building of Loire’s famous châteaux was at its height. The castles were primarily built from the tuffeau limestone plentiful in the area. It is because of this extraction that the Monmousseau Enlightened Cellars exist. Not just a place to store the wines of Monmousseau, the massive 15-kilometer underground maze is also a gallery of light and fantasy.

Artists, NaDa {Nathalie Dahon} and ReNo Menat created vignettes mimicking stained glass onto transparencies, which are projected onto the walls of the stone galleries. Many of the rooms are inspired by the surrounding châteaux, which include symbolism, rather than direct representations of the castles. The tapestries of color illuminating the caves also include music and video elements. It’s a fantastic, magical underworld, unlike anything I’ve ever experienced.

I was a guest of Atout France, but in no way was my opinion swayed by the bottomless bubbles, the high-flying bi-plane, or the queen-like treatment I was given while in the Loire. As always, opinions are mine. For more information, check out Atout France, Loire Valley Wines, Wines of Centre-Loire, Loire Valley Tourism, and Pays de la Loire Tourism.