Travel from Paris’ Montparnasse train station to Laval took less than two hours, but felt a world away from the frenzied city. It’d been two years since I’d visited the Loire Valley, but it had become one of my favorite regions in France for its wine, rural landscape, and châteaux. During the summer, I was invited by Thibault le Marié to his family house in the tiny village of Forcé, which is located in the Mayenne department. Perhaps ‘house’ is an understatement. Château de la Mazure is majestic and more than bricks and mortar. It’s a glimpse into centuries past, but also an estate very much still full of life. I was invited to Château de la Mazure to experience their French Lifestyle Program, which includes learning French, along with an immersion into French culture. 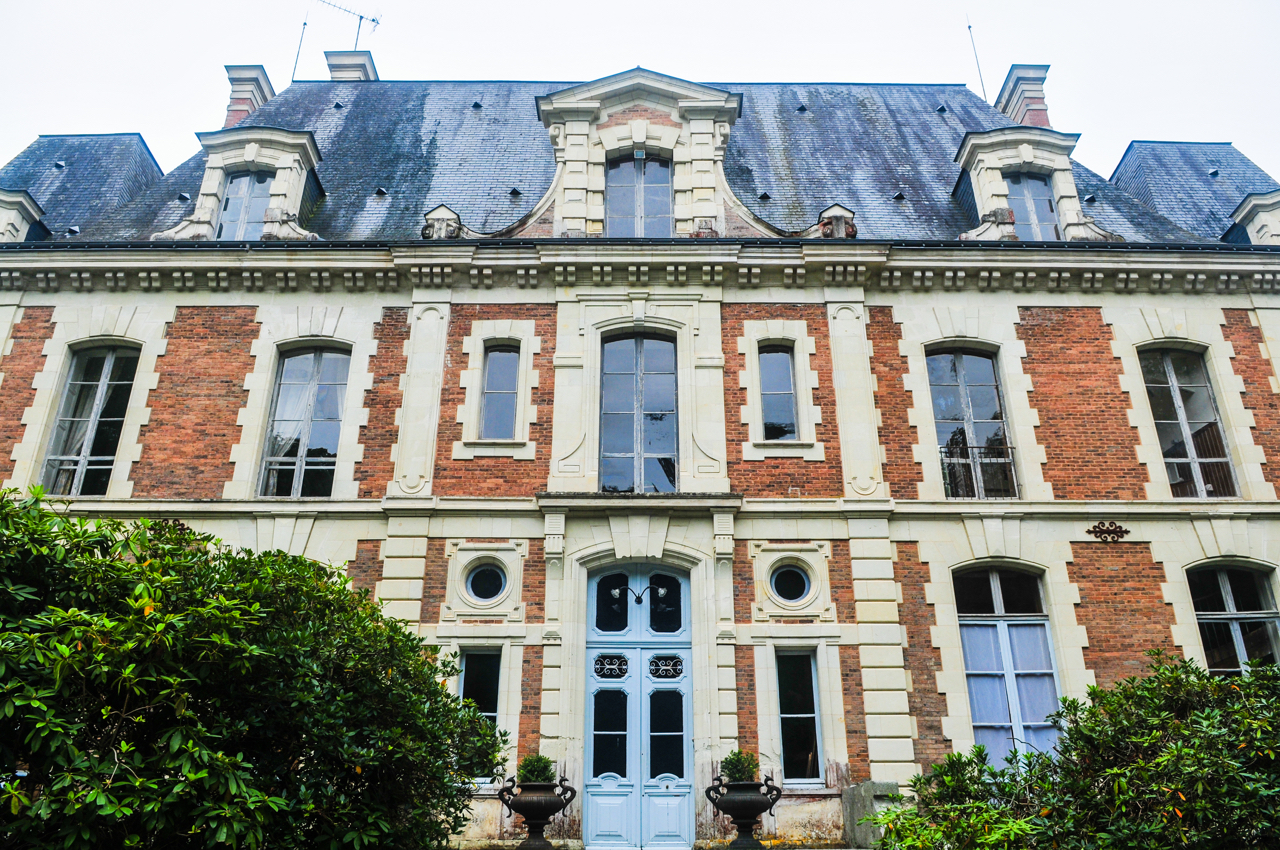 Thibault, along with his mother, Aude le Marié de Montgrand, call Château de la Mazure home, and for three nights, it would be my home, too. Through a narrow road shaded with dense trees, the Louis XIII style-château revealed itself. Thibault explained that it has been in his father’s family since 1900. Sitting on nearly 500 acres of lush land, the château’s façade is virtually unchanged. Idyllic and peaceful, I instantly felt welcome. 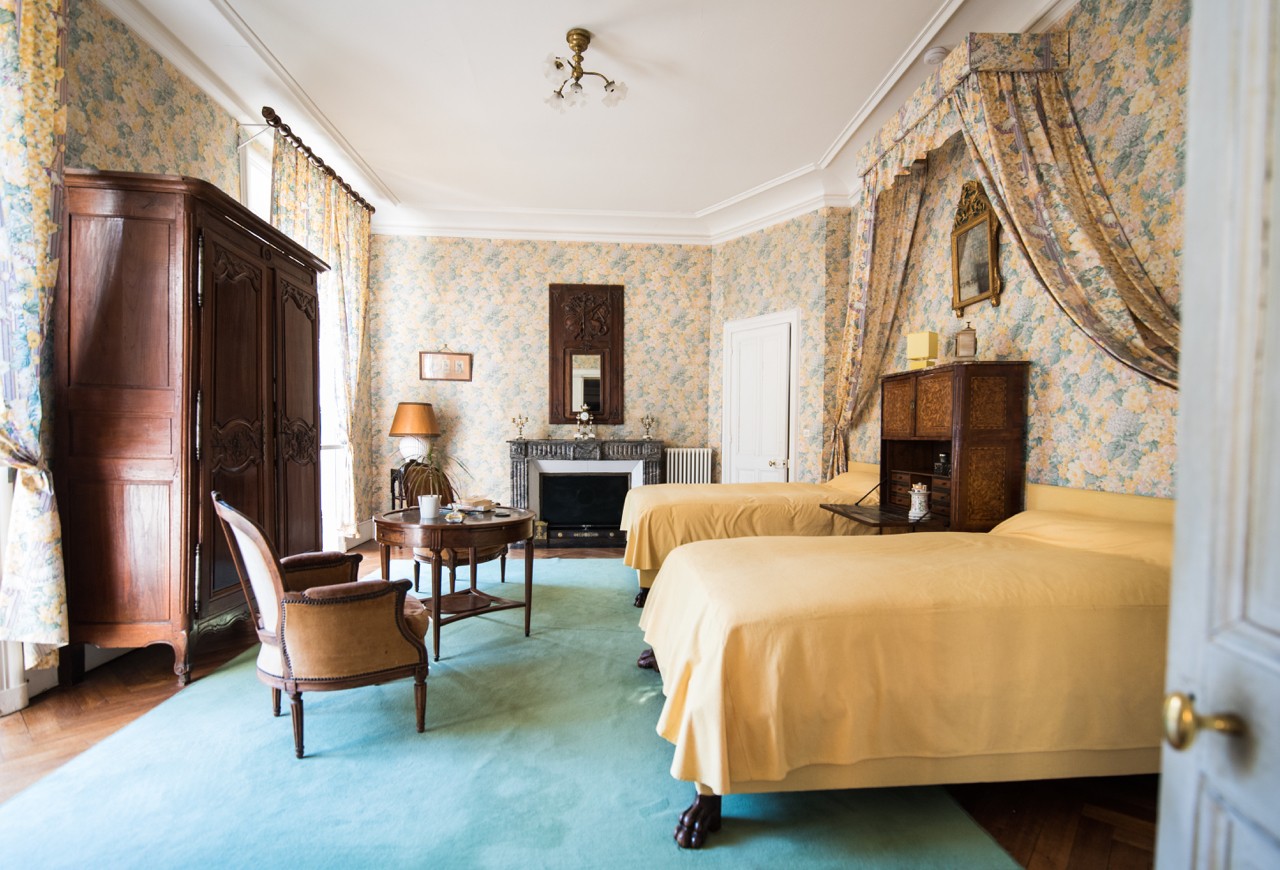 I was led up to the ‘Yellow Room’ by way of the imposing, chestnut-colored staircase. Beautifully ornate, it had been removed from a building in Paris and relocated to Château de la Mazure. A massive custom-made tapestry was a reminder of the area’s textile past. A spacious room with soaring ceilings and two large windows allowed me to further drink in the estate grounds. There was no time to linger, as aperitifs were being served in the petit salon, followed by dinner.

I was oblivious to the itinerary, which was just fine with me. Though, I was incredibly anxious about the learning French part. After three years of living in Paris, my French is what I’d call poor. Reading and comprehension is somewhat acceptable, but speaking is abysmal. I’m actually quite ashamed of myself. You’d think that after countless panic attacks just thinking about going to the bank, post office, and prefecture, that I’d get my rear in gear and develop an acceptable level of French. My hope was that the three days at Château de la Mazure would jump start my confidence and enthusiasm for learning French. 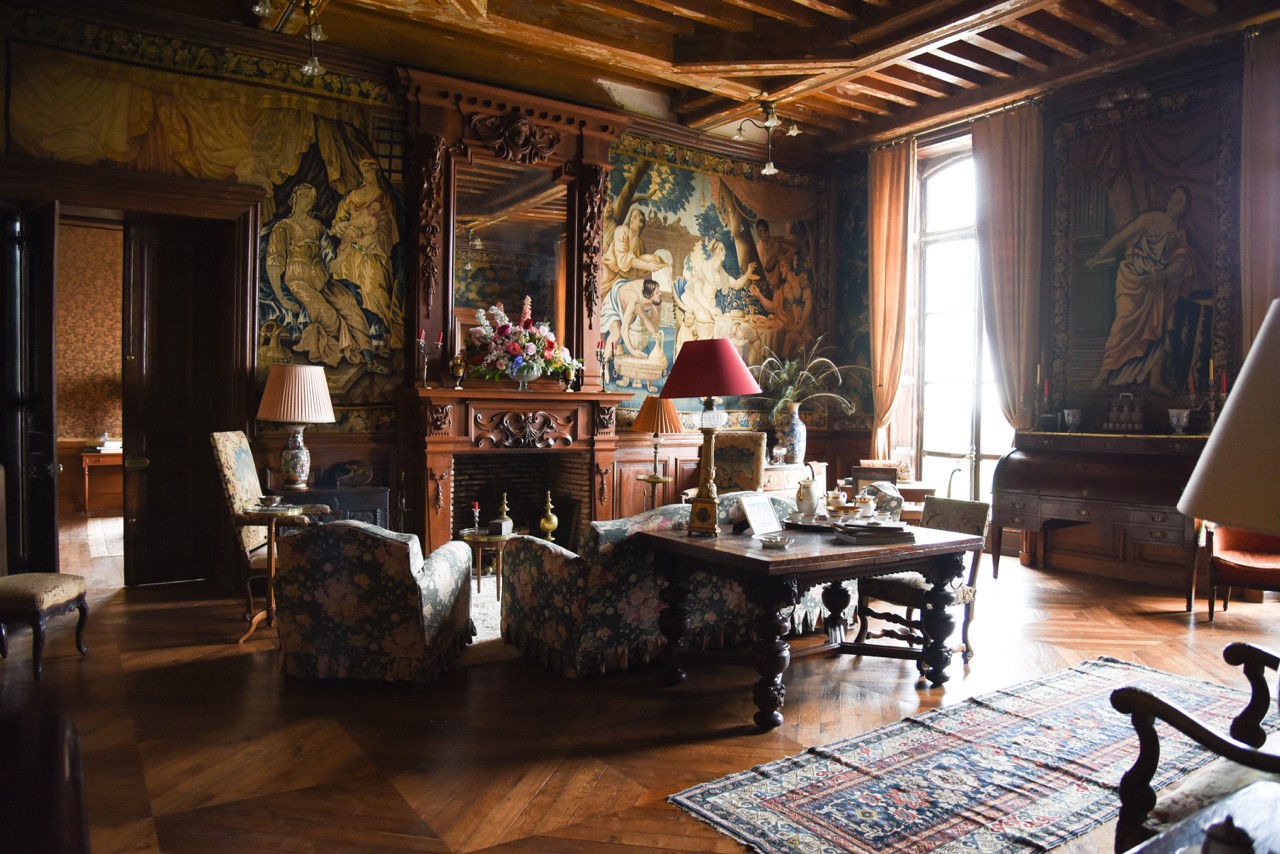 Relief washed over me, as I heard the hum of English coming from the petit salon. In the cozy setting, gin and tonics were being sipped by a group of French air traffic controllers. Obviously they weren’t at Château de la Mazure to learn French, but instead improve their English skills. A comfortable English-speaking dinner wasn’t in the cards for me. Rather, my three-course meal would be in another dining room with Thibault and his mother, Aude. 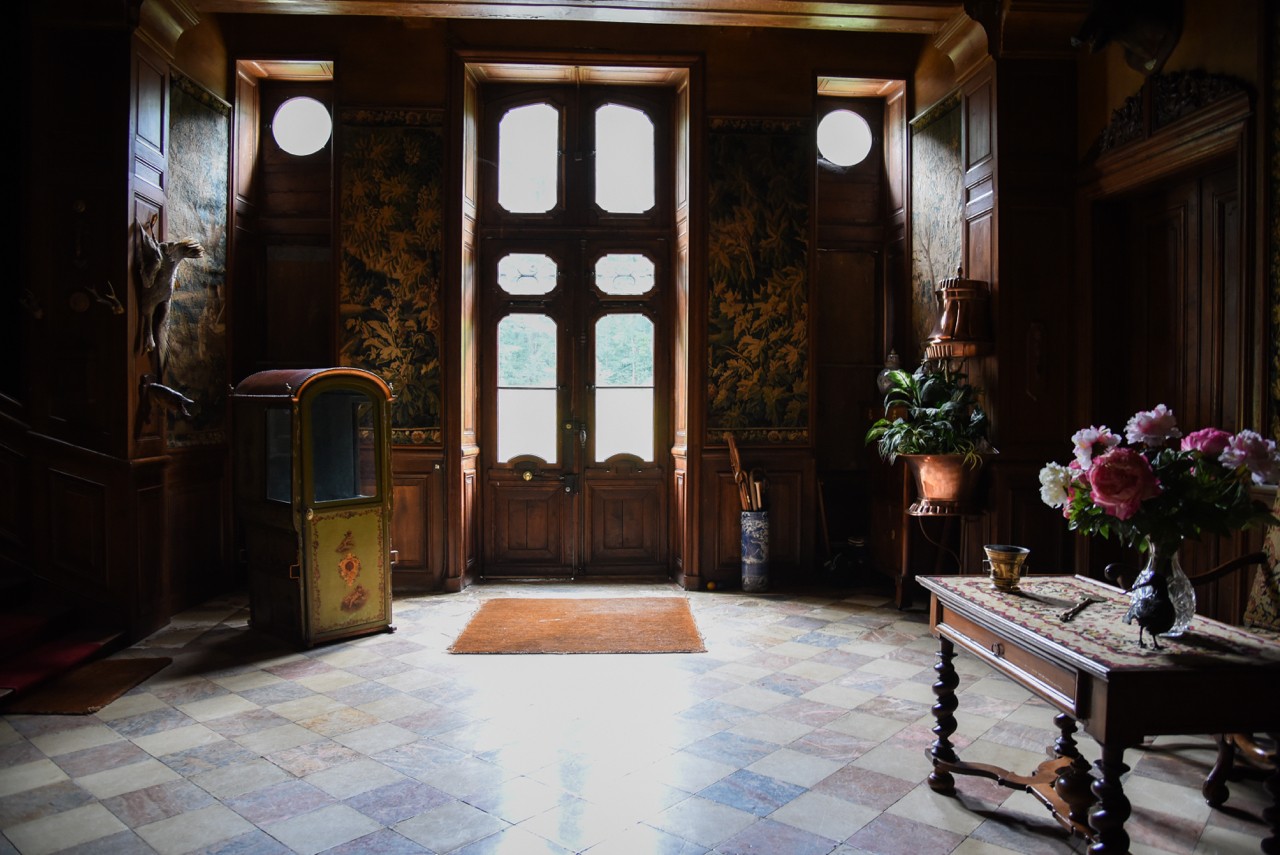 Over dinner, I learned that Thibault is a landscape architect that’s traveled much of the world and lived as an expat; he returned home in 2014. Aude was responsible for teaching English at what is now Airbus. When Aude’s husband, René le Marié, inherited Château de la Mazure, she created the language school specializing in English immersion for adults and teens, as well as French immersion for English speakers. For more than three decades, Aude has developed and honed her language program inside the walls of the family’s château. Perhaps I would be her toughest test. 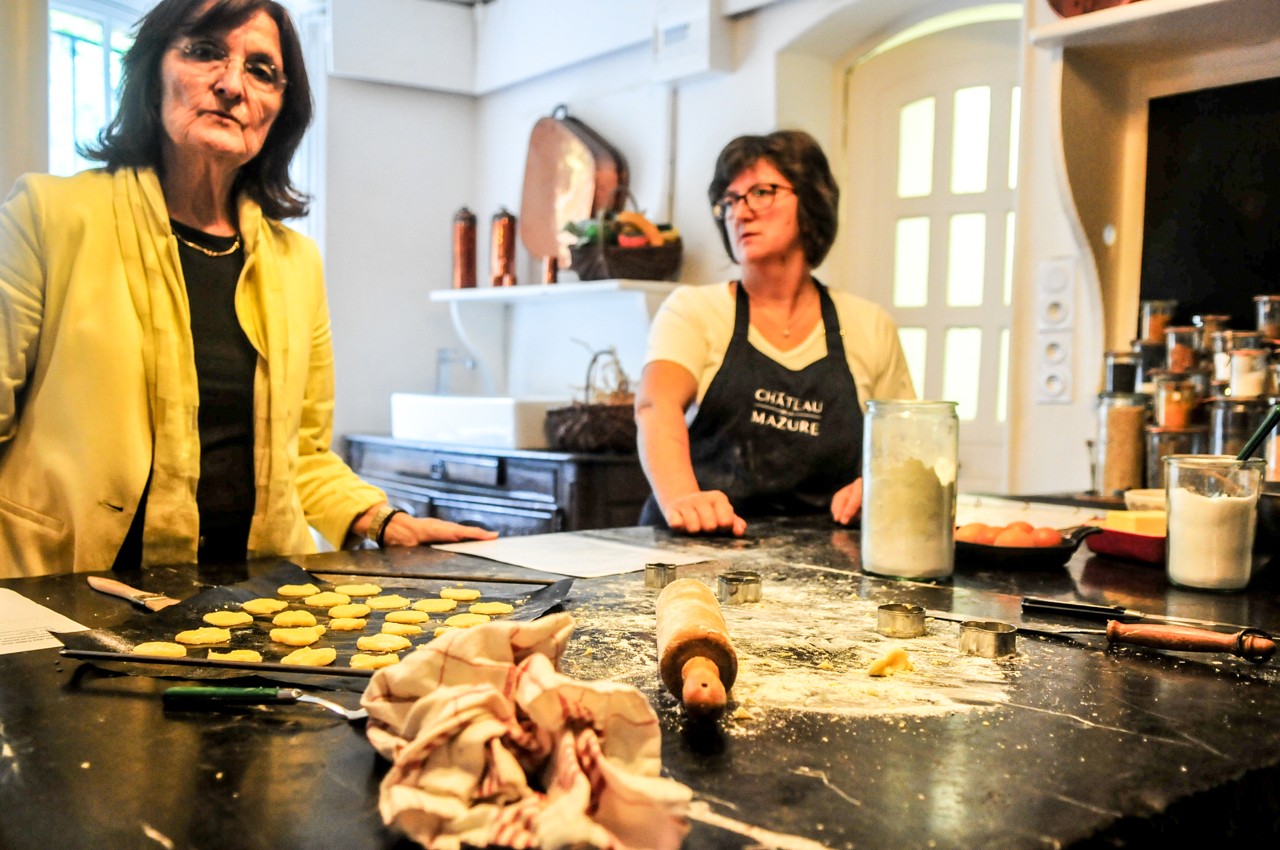 At breakfast, I was given a French workbook, along with an apron. After the croissants, locally grown fruit, coffee and freshly squeezed juice, a baking class was on my agenda. More than simply making cookies, this was also a language exercise. Aude’s objective was not just for me to read, memorize, and repeat French tongue twisters, but to do all of this while making cookies. Sounds simple, right? Hardly! We began with the dreaded ‘R’ sound. For five years, I’ve been trying to master the art of pronouncing ‘Reims’ correctly. With this exercise, I was jumping into the deep end of the pool without a life jacket.

As a former teacher, I know how difficult it is to explain new or difficult subjects. Aude had her hands full with me, but with patience and encouragement, she made me feel more at ease. I had a few ‘light bulb’ moments while making those cookies. Complex concepts were simplified and something resembling confidence emerged inside of me. For the first time since moving to France, I felt as if I might actually be able mail a package without breaking into a nervous sweat.

My three days wasn’t just about learning French, but also an immersion in French culture. I was unfamiliar with the Loire Valley’s Mayenne department, but that would change in the following days. First, I discovered the city of Laval, the 11th century capital of Mayenne and home to La Cité du Lait {Museum of Milk}. Owned by Lactalis, Europe’s largest dairy products group, the museum is nearly 55,000 square feet of space devoted to milk. 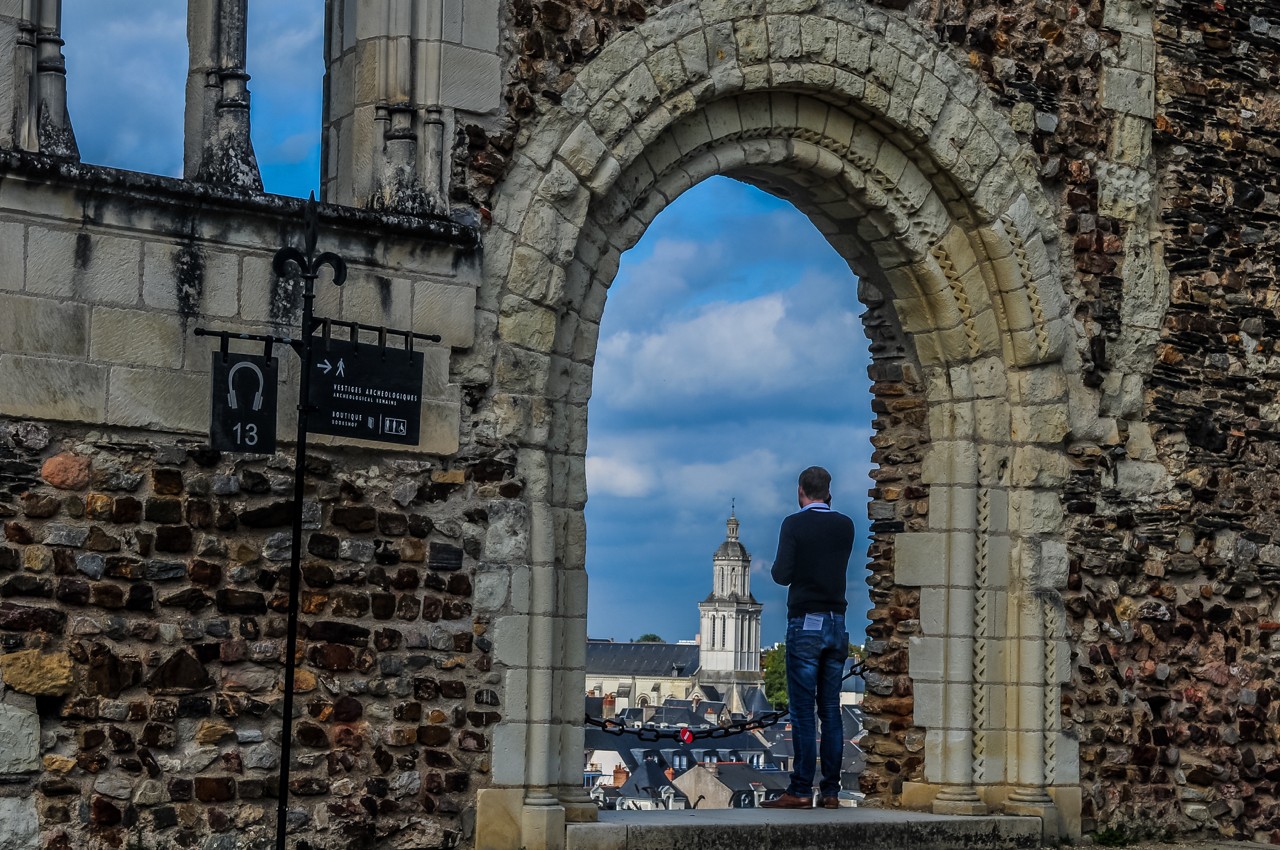 About an hour’s drive from Château de la Mazure is the city of Angers. Located on the Maine River, Angers dates to 150 AD. After a tour and delicious cocktail at the Cointreau factory, Thibault took me to the 6th century Château d’Angers. This ancient castle is home to the Apocalypse Tapestry, which is France’s oldest set of tapestries, dating to the Middle Ages. 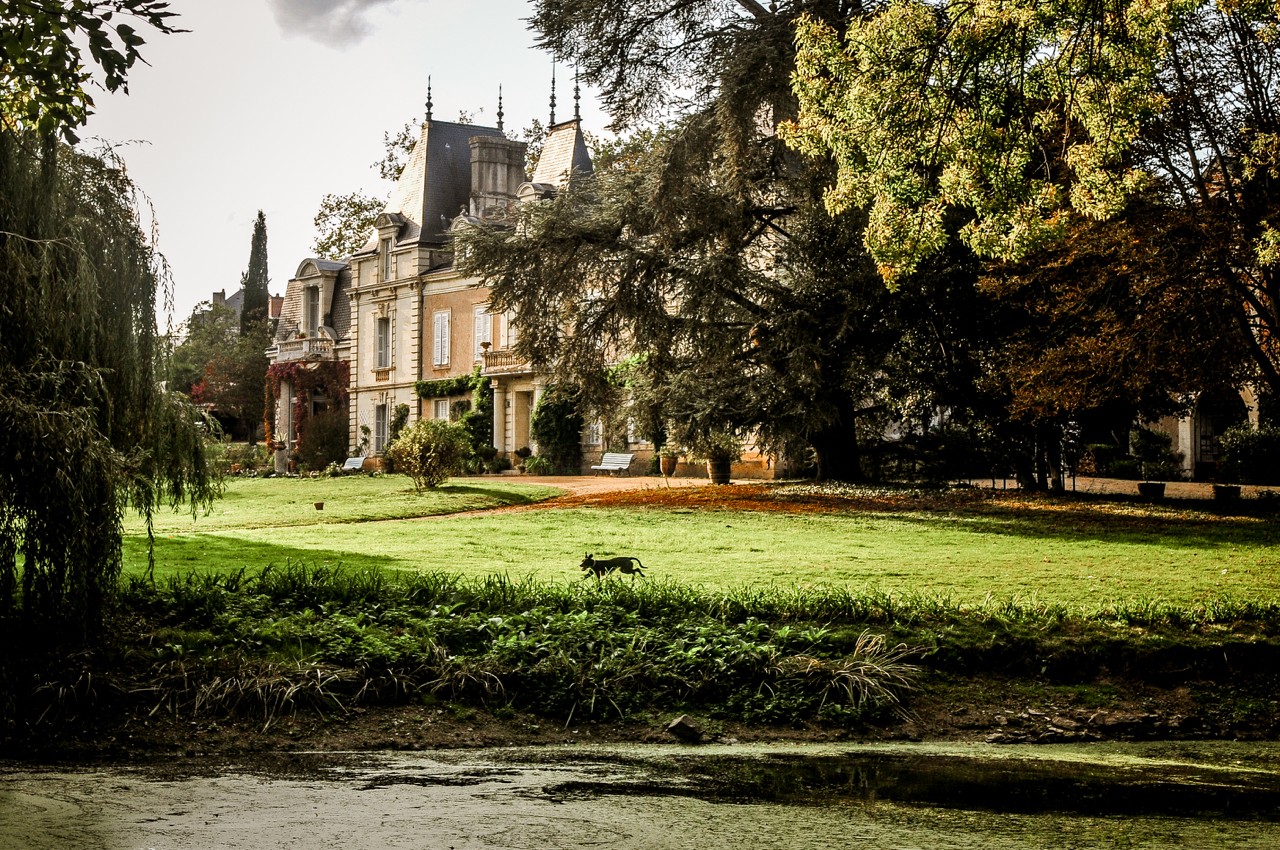 A trip to the Loire Valley would be incomplete without a stop in the vines. Savenières is not only a picturesque village in the central Loire Valley, but it’s also an AOC designation, specializing in white wine made from Chenin blanc grapes. In France, having a friend that owns a vineyard isn’t such an odd occurrence, so it came as no surprise that Thibault would introduce me to Evelyne de Pontbriand, owner of Les Vins Domaine du Closel. A long walk through the vines with Evelyne, followed by a tasting in her 17th-century castle, was an afternoon to remember. 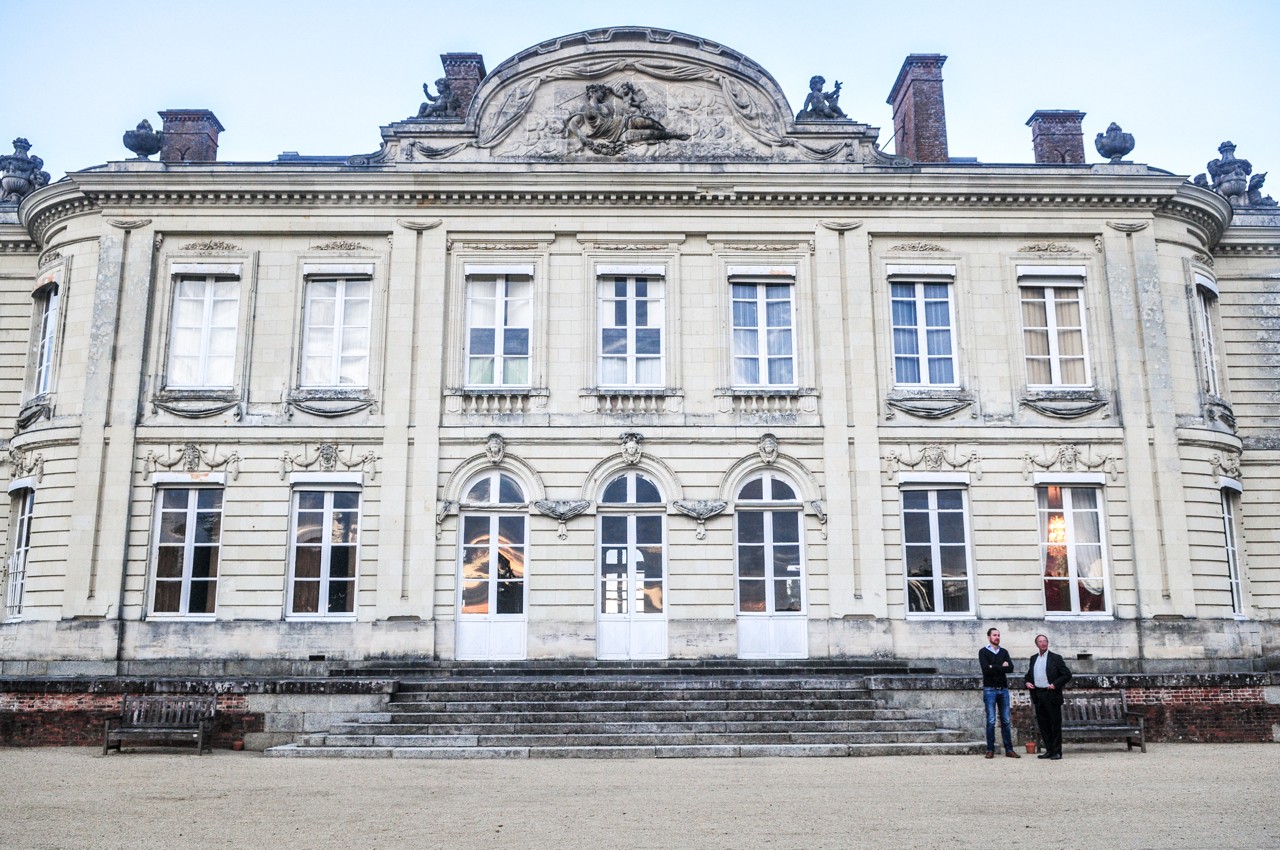 Again, this is France, so having friends who live in castles isn’t unusual, nor are castle dinner invitations. My evening’s meal took place in a impressive environment known as ‘Little Versailles’. Massive and intimidating are understatements when describing this family-owned castle. The only thing grander than the building was the sweeping grounds, which seemed to stretch to the edge of town. I was warmly greeted by two generations and quickly given a tour of the castle. I moved from room after room, marveling at the centuries-old antiques. Tales about the castle were shared over Champagne and foie gras, followed by a home-cooked meal in the grandiose dinning room. All the while, a local choral group practiced singing just down the hall. Just another Wednesday night in France… 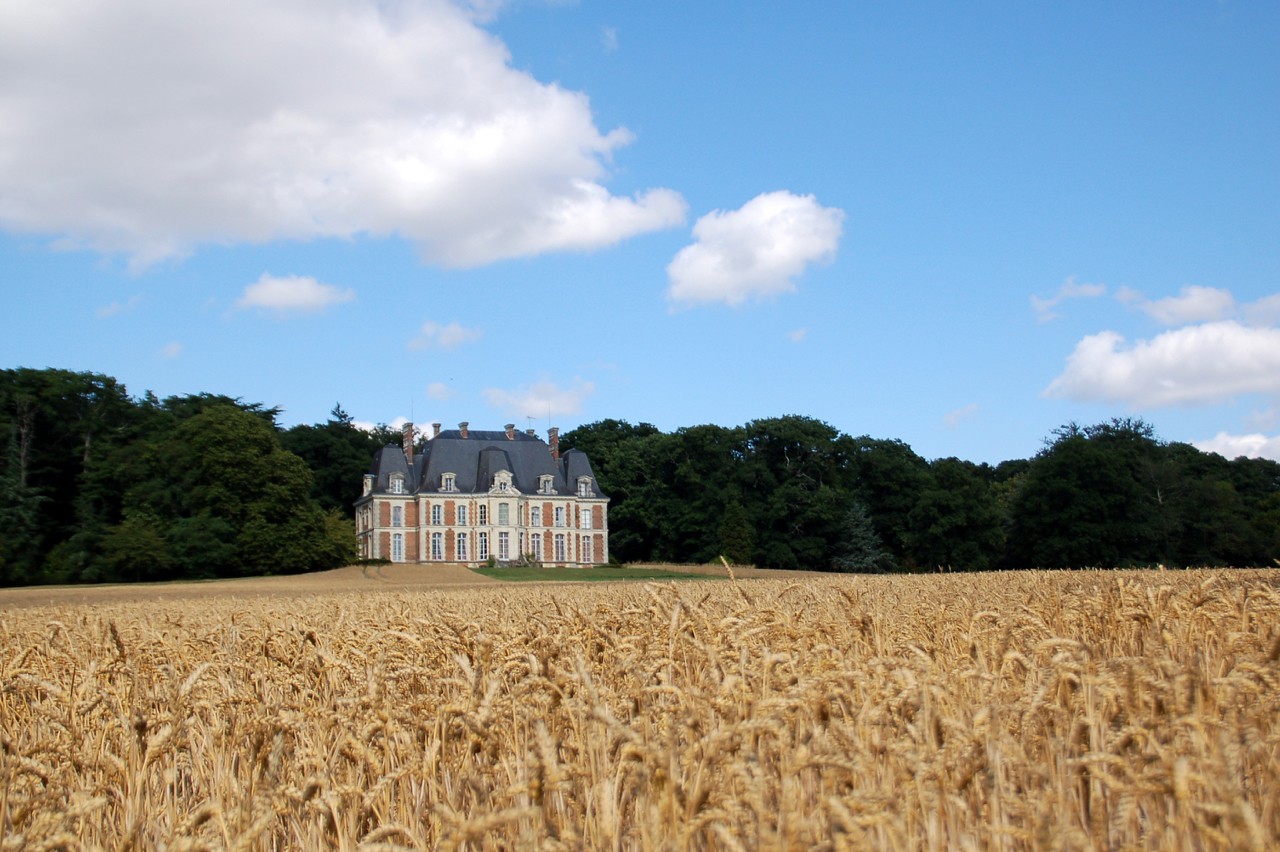 My time with Aude and Thibault at Château de la Mazure ended far too soon. From the moment I stepped off the train to the time I stepped back on, I felt like I was part of their family. The spirit of the castle is infectious, inspiring, and enveloping. Certainly, that’s not due to the bricks, wooden floors, or tapestries. Rather, it’s because of the people that live within. I hope one day to return to Château de la Mazure, not just for learning French, but to see my friends, Aude and Thibault.

I was a guest of Château de la Mazure. In no way was my opinion swayed by the delightful conversation, the scrumptious food, or the overwhelming hospitality. As always, opinions are mine.