If you’ve followed along on my blog and social media for any time at all then you know that two of the things that I enjoy most are traveling and shopping. One of my very favorite French regions teamed up with one of my favorite places to shop, with a 2019 summer retail event called Normandie Chérie or “Beloved Normandy.” 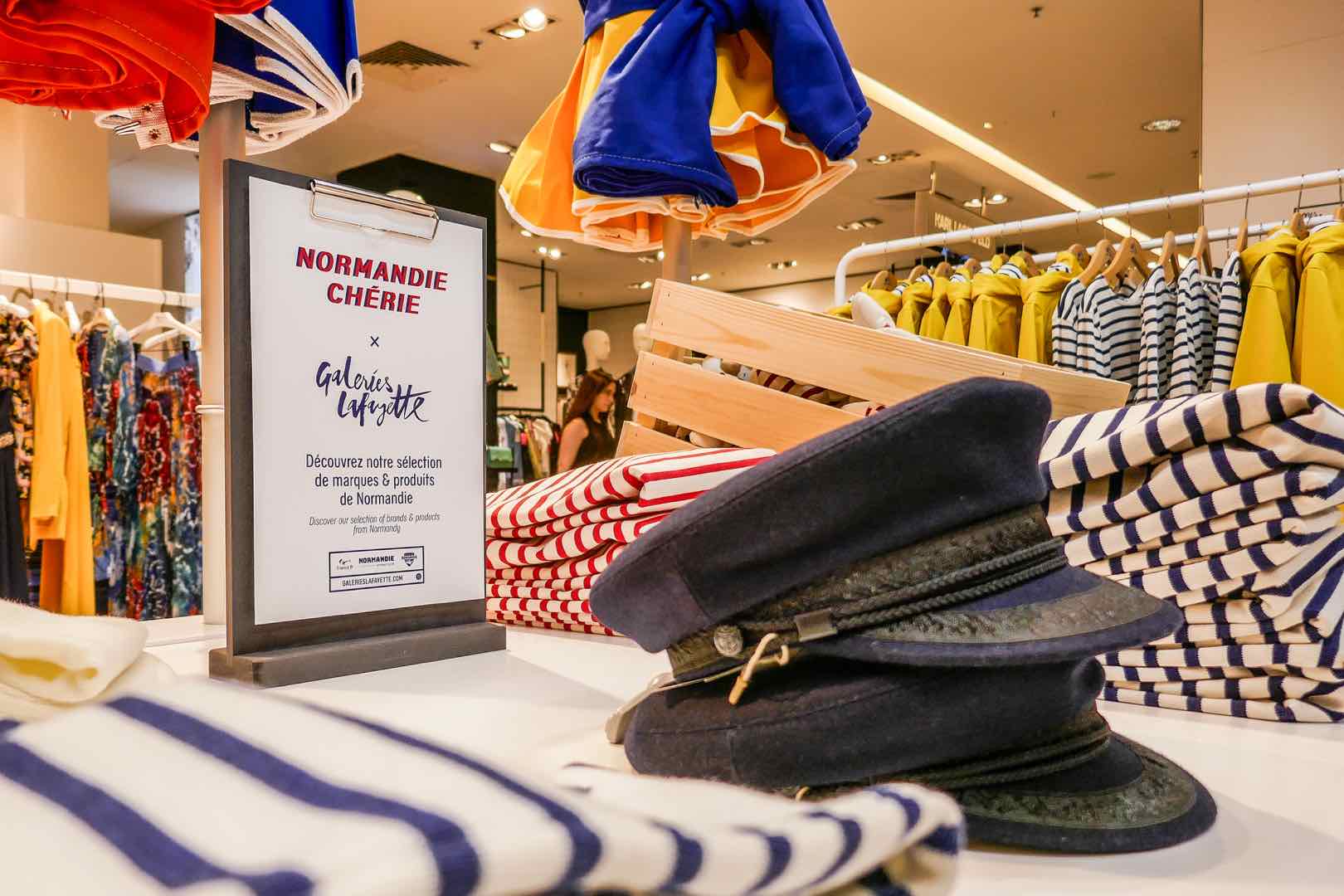 If a Normandy tease has you wanting more, walk the five minutes to Gare Saint-Lazare and hop a train to Normandy like I did! It’s only about two hours to Le Havre and Caen or two-and-a-half hours to Deauville, making the region easily accessible for a day trip or longer. I spent less than 48 hours in Normandy, but discovered parts of the region that I’d not yet experienced in my previous trips.

I last visited Caen in 2014, during my Spiritual Tour of Normandy with Atout France. It’s a city filled with significant history from William the Conquer to World War II. In addition to the iconic 11th century Abbaye-aux-Hommes, Caen is also home to Abbaye-aux-Dames, which was founded by William the Conqueror’s wife, Matilda of Flanders, and dedicated to the Holy Trinity. Once a shelter to girls from aristocratic Norman families, the building has also been used as barracks, a warehouse, hotel, hospice, and now, it’s home to the Lower Normandy Regional Council. The Holy Trinity Abbey Church holds the body of Queen Matilda. 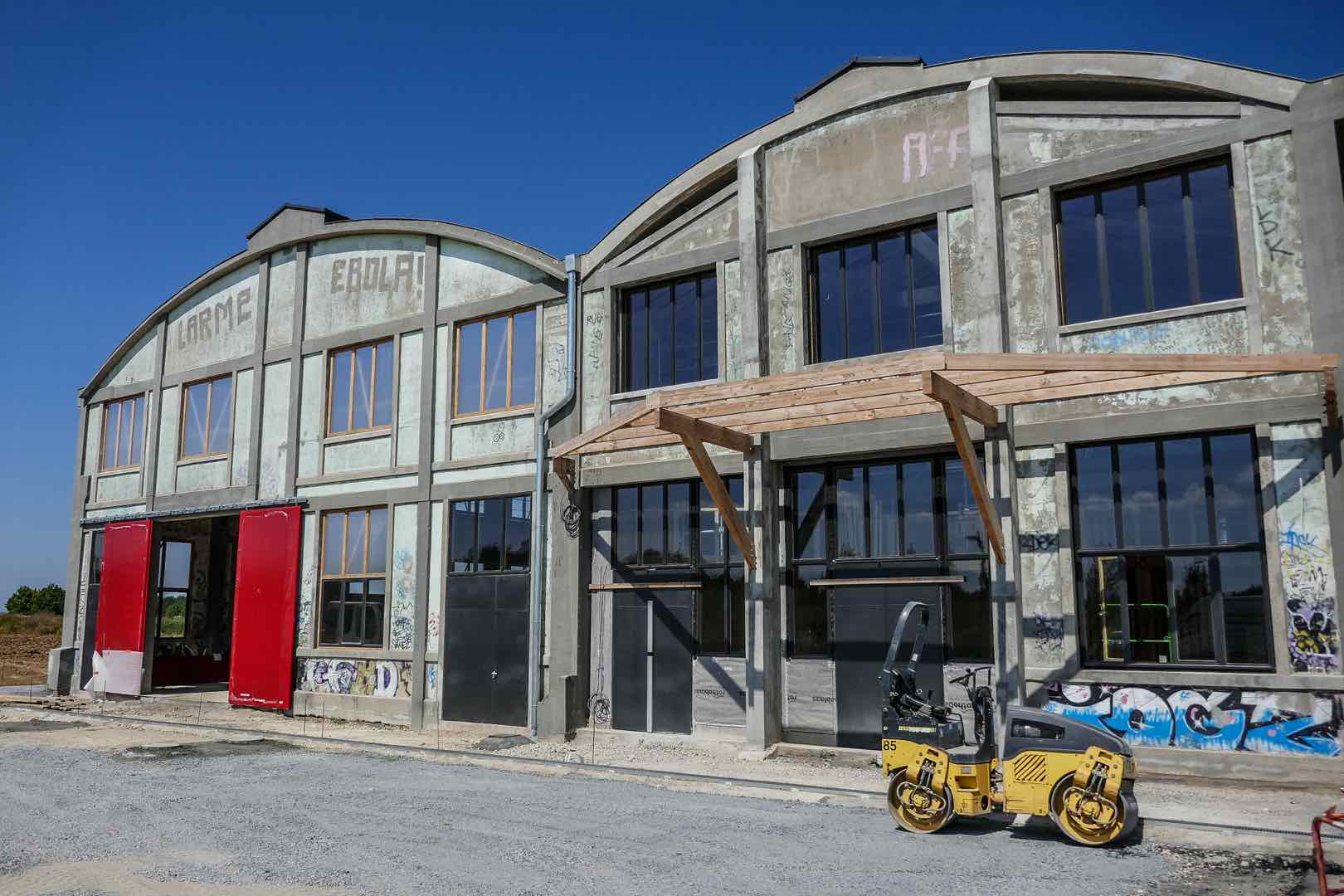 One thing I noticed during this trip to Normandy was that the region is taking old buildings and revitalizing them for modern purposes. Take for instance La Cité de Chantier, in Colombelles, just outside of Caen. This former steel mill is being transformed into over 3,000-square feet of co-working spaces, meeting rooms, restaurants, as well as space for art exhibitions and concerts. It’s being constructed from recycled and recyclable materials and is due to open in October 2019. 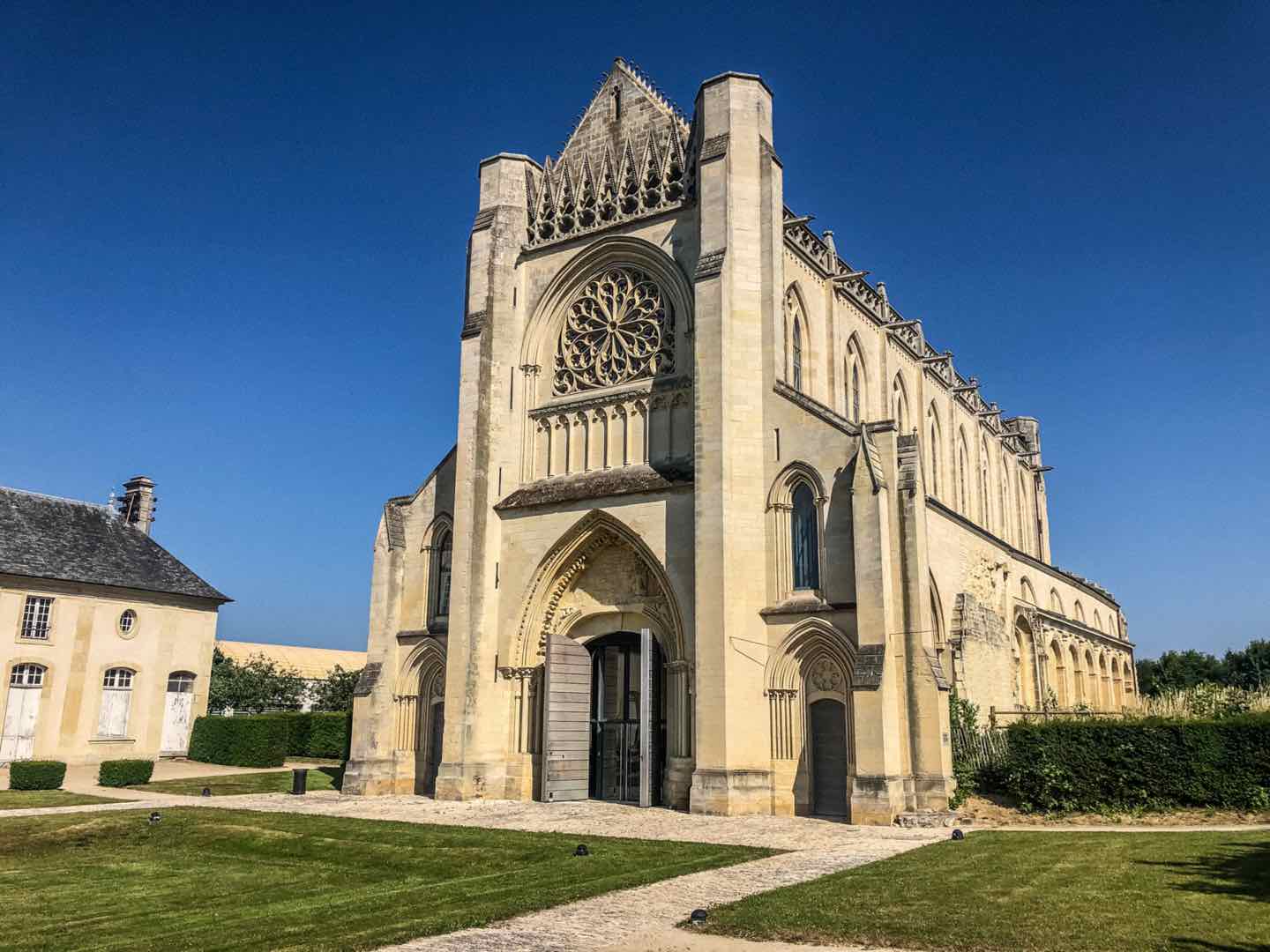 Another historic complex near Caen that’s taken on a modern use is Abbaye d’Ardenne, which dates to 1206. This ancient abbey is now home to L’Institut mémoires de l’édition contemporaine, or “Institute for Contemporary Publishing Archives,” in English.

This non-profit research library collects and preserves the contemporary written word from major publishing houses, journals, and individuals such as writers, artists, reviews, researchers, playwrights, translators, reporters, and graphic designers. These archives were originally housed in Paris, until they were moved to Abbaye d’Ardenne around 1996. 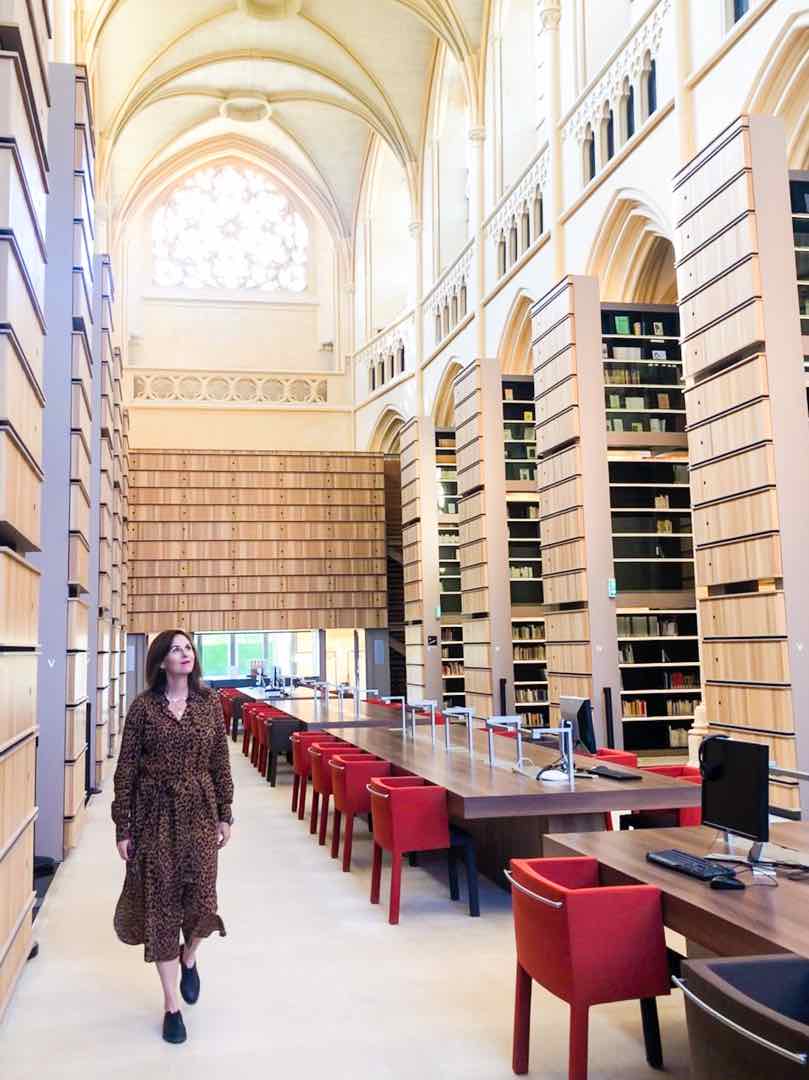 With a restoration funded by the Lower Normandy Regional Council and the French government, the abbey church was turned into a home for the 80,000-book library, and the surrounding farm and buildings were transformed into spaces for events, exhibitions, and seminars. Since the abbey is protected by the state, there could be no significant changes to the building. Instead, the architect built the library as an unattached structure within the abbey walls. 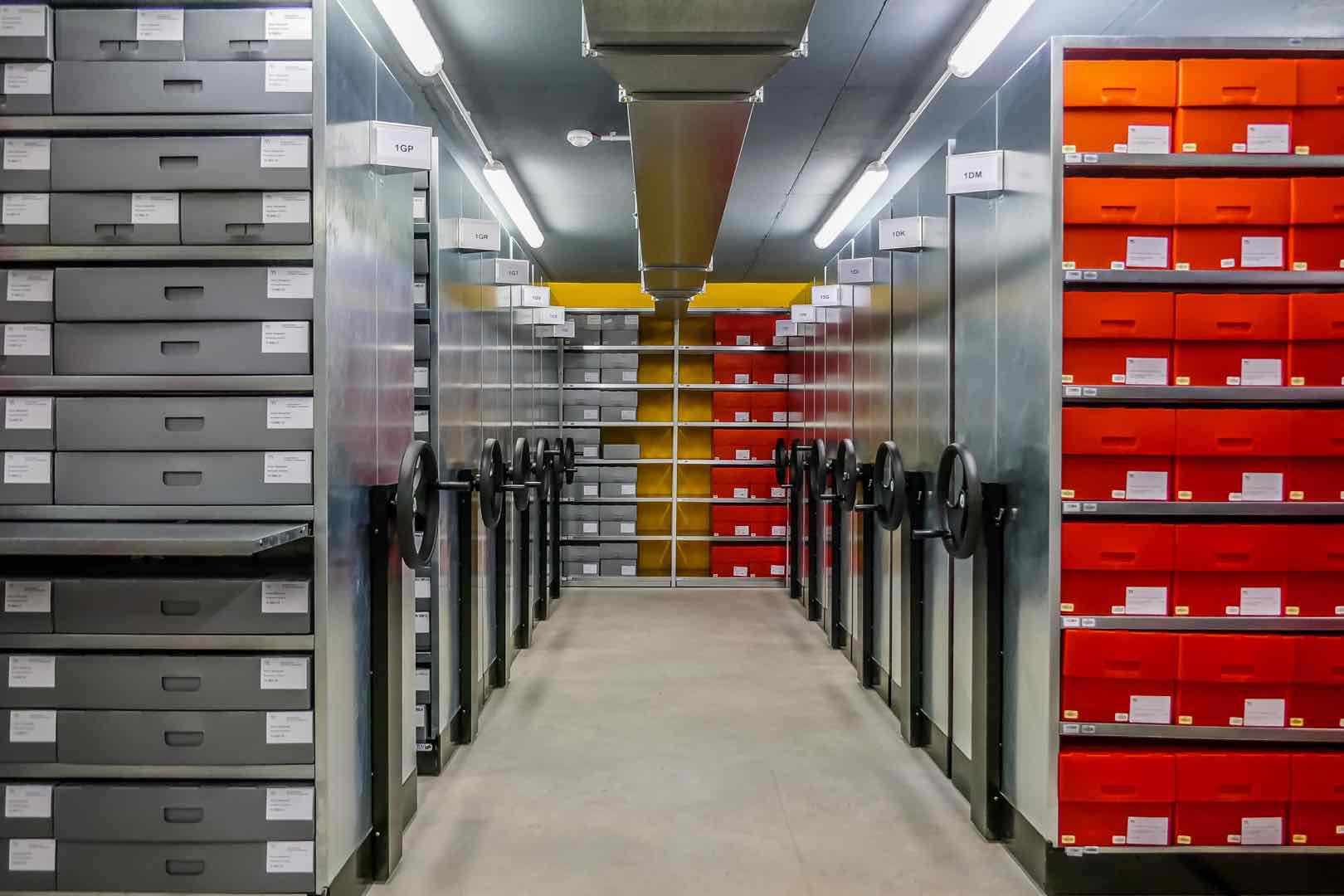 Well below the library are the archives, a place only open on French Heritage Days. I was thrilled to get a look at this special space. It contains 44 million pages, 120,000 boxes, and 27 kilometers of shelves. 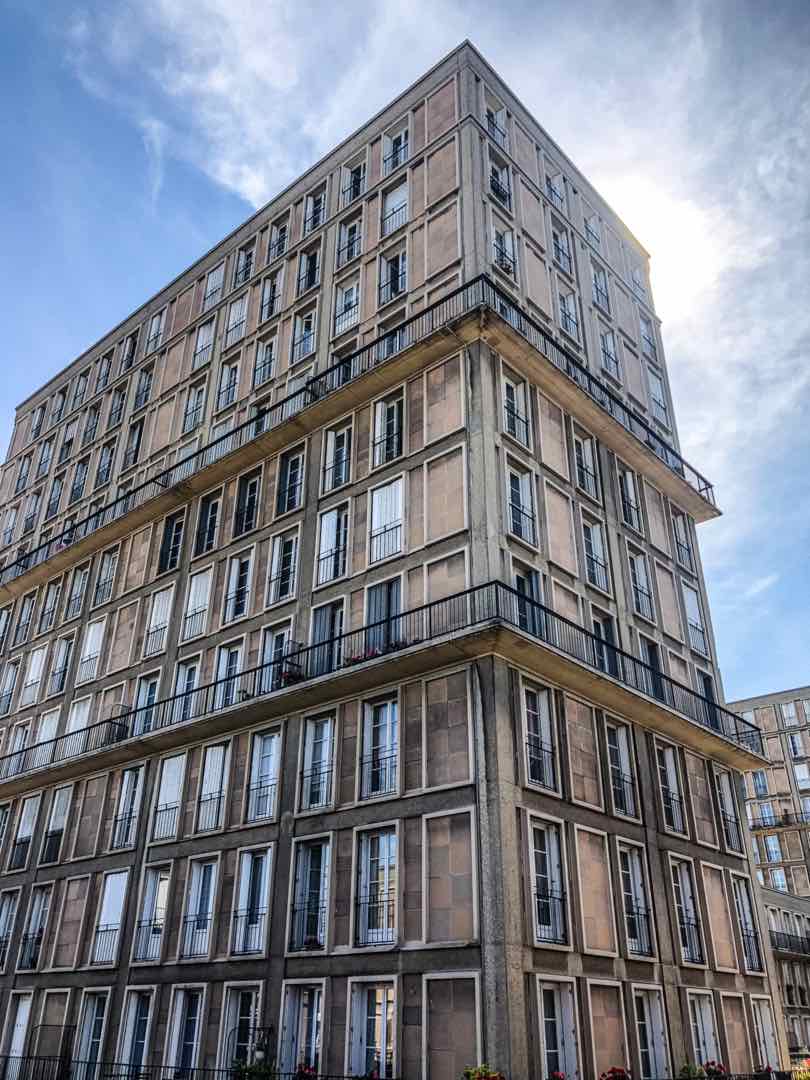 Like Caen, Le Havre suffered much damage during World War II. As a result, the coastal city, at the mouth of the Seine River, is a patchwork of new and old. It was Auguste Perret that was tasked with rebuilding post-war Le Havre. Born in Belgium to a stone cutter, Perret was educated at Ecole des Beaux-Arts in Paris. Ironically, the signature of Perret’s plan was using reinforced concrete. Today, Le Havre is one of the very few cities with modern architecture to be named a UNESCO World Heritage site. 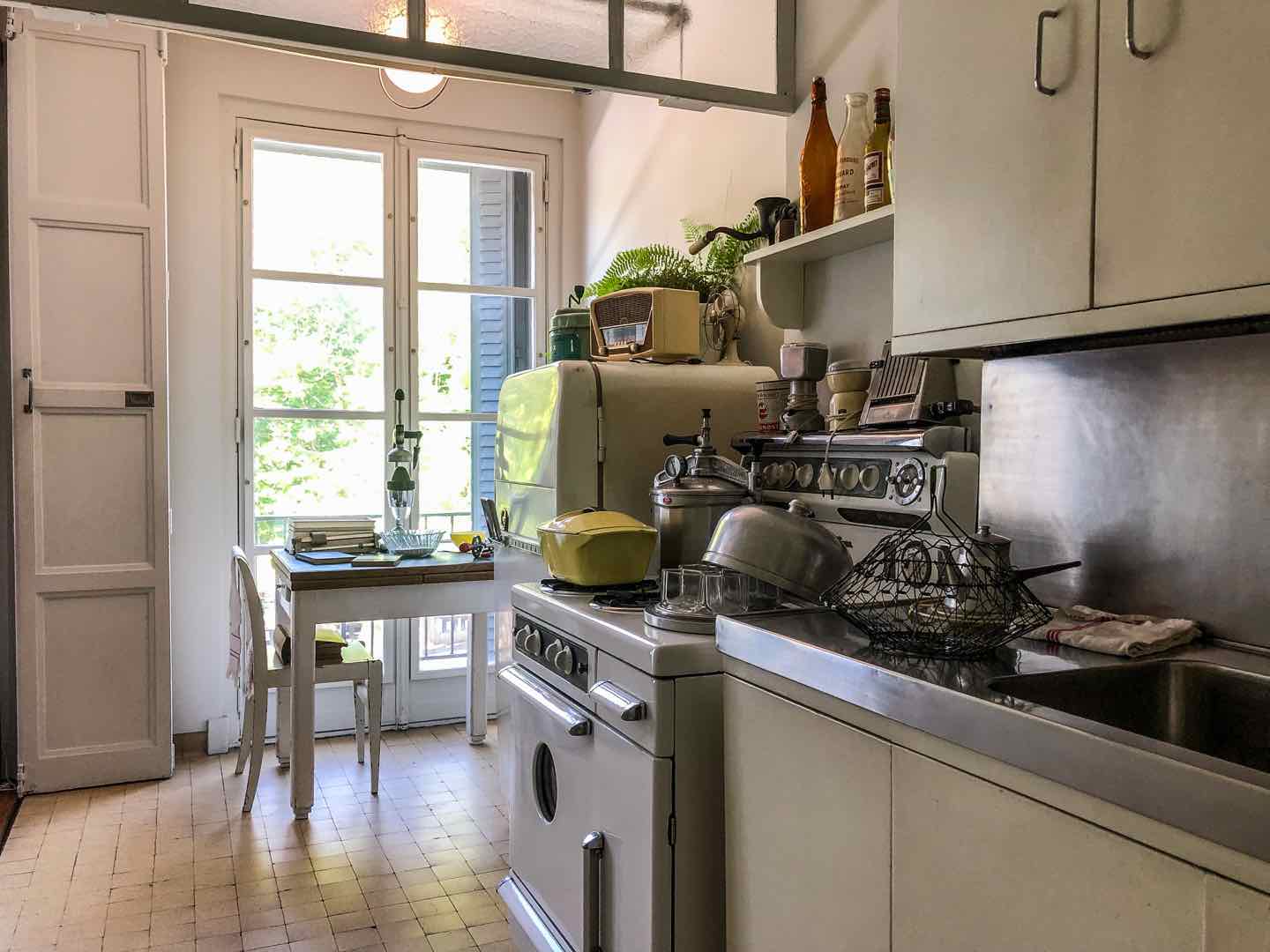 To see first-hand Perret’s design, visit Appartement témoin Perret, for a look at life in Le Havre in the 1950s. This museum presents one of the 10,000 apartments built to house those who lost their houses during the war. This show apartment is outfitted in mass-produced furniture of the era, a mix of Art Deco and Scandinavian design. From the appliances to the toys in the child’s room, visiting this museum is must when in Le Havre.

Perhaps one of the most beautiful public swimming pools in the world is Les Bains des Docks, which explains why Courtney Roy featured it in her photo series for Galeries Lafayette. Designed by famous French architect, Jean Nouvel, this project’s goal was to revitalize Le Havre’s docks and warehouse district. In the 5,000-square feet of space, there is a sports pool and a play area, complete with waterfalls, slides, water cannon, paddling pool, and a child’s lagoon. Les Bains des Docks also has a sauna, hammam, hot and cold baths, water bikes, and a spa. The entrance fee begins at less than €5.00 for adults. 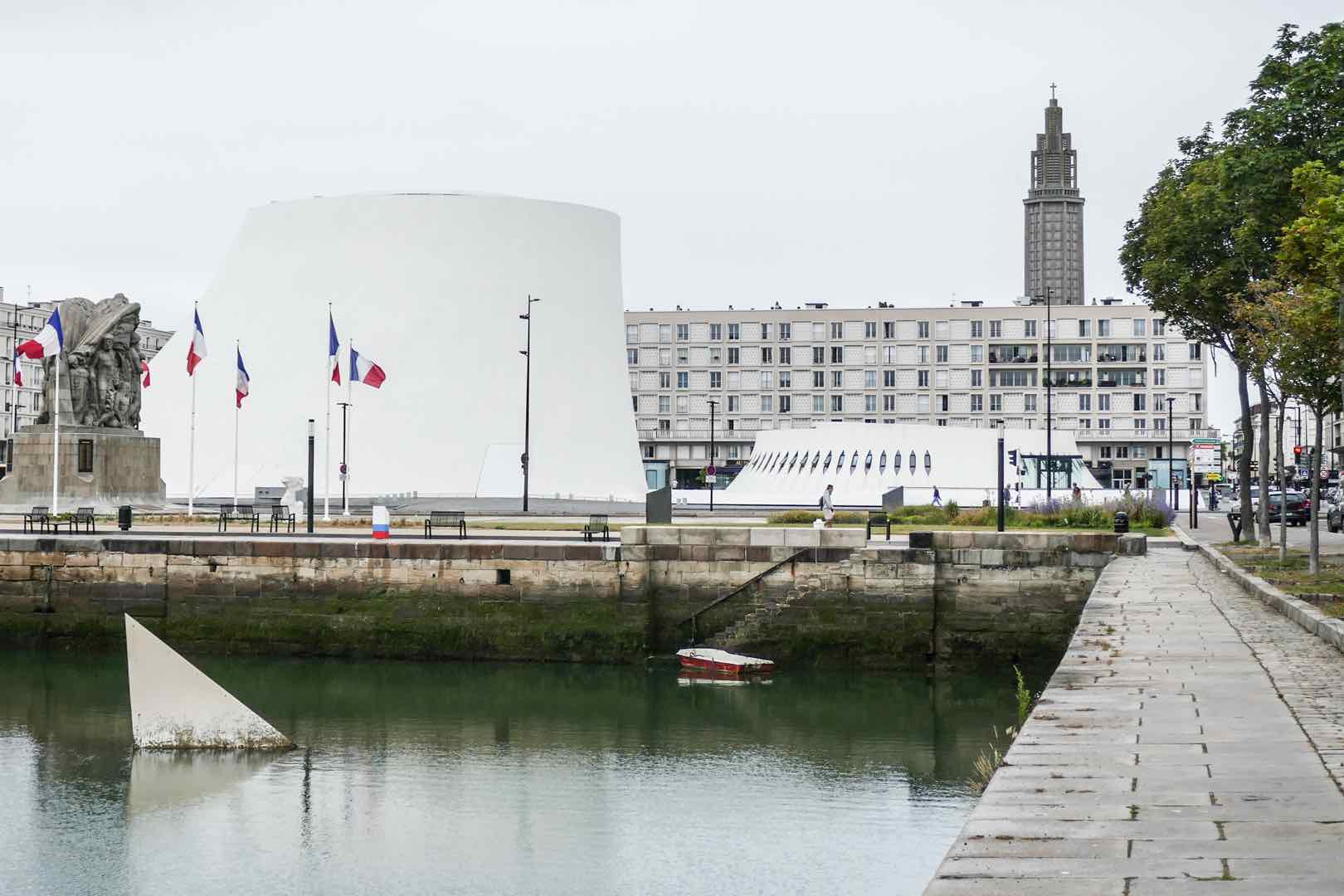 Located in the heart of the reconstructed city center of Le Havre is Maison de la Culture. Oscar Niemeyer, the world-renowned Brazilian architect, created the cultural center in the mid-1970s, while he was a refugee in France. It’s one of the few projects he realized outside of Brazil. Made of concrete, with plenty of curves, the development is known as Le Volcan, or the Volcano, and houses a theater and public library. 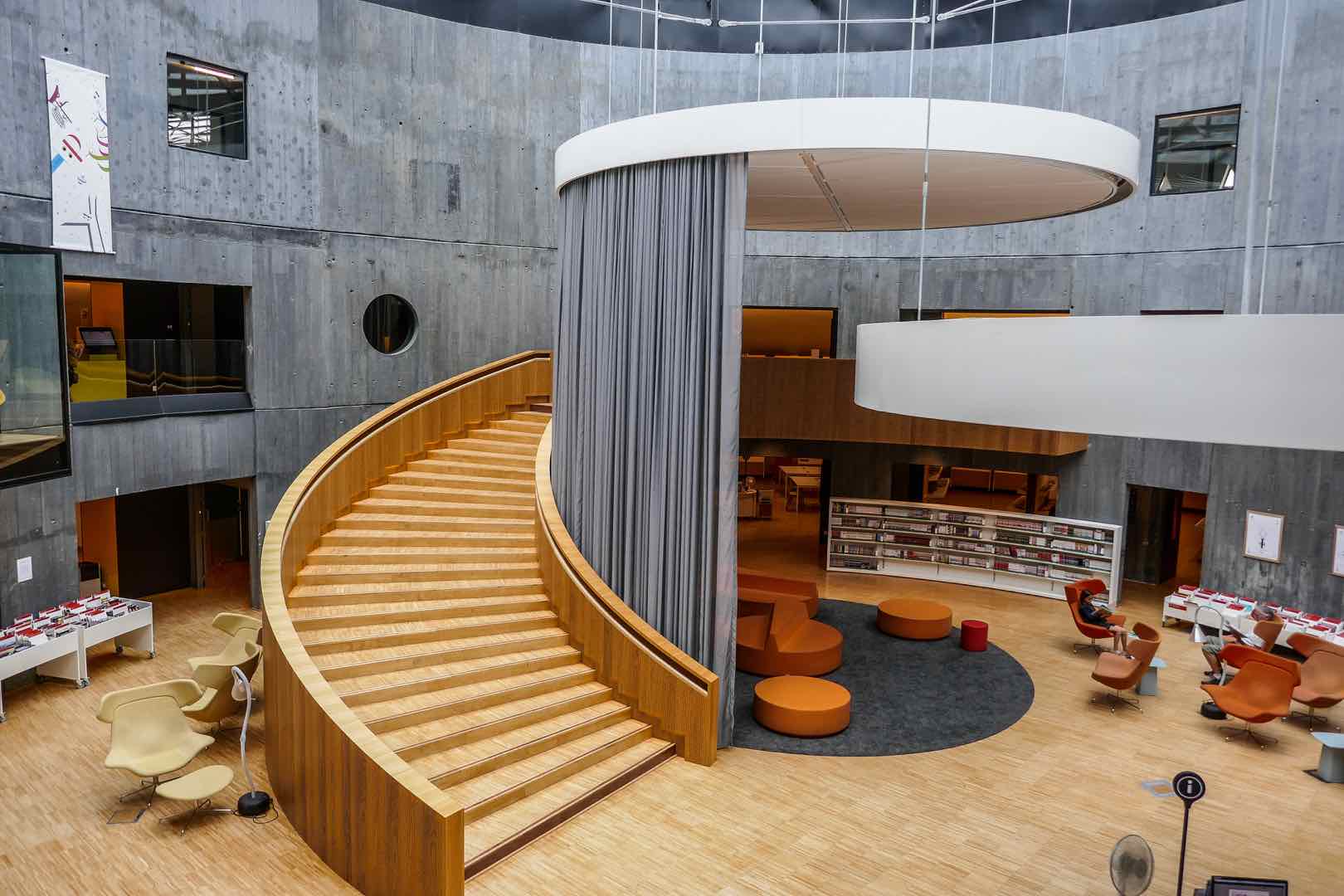 Bibliothèque Oscar Niemeyer is simply one of the grandest buildings for books you can imagine. Home to over 116,000 documents, it also has modern technology such as computers, listening and viewing stations, tablets, and free wi-fi. 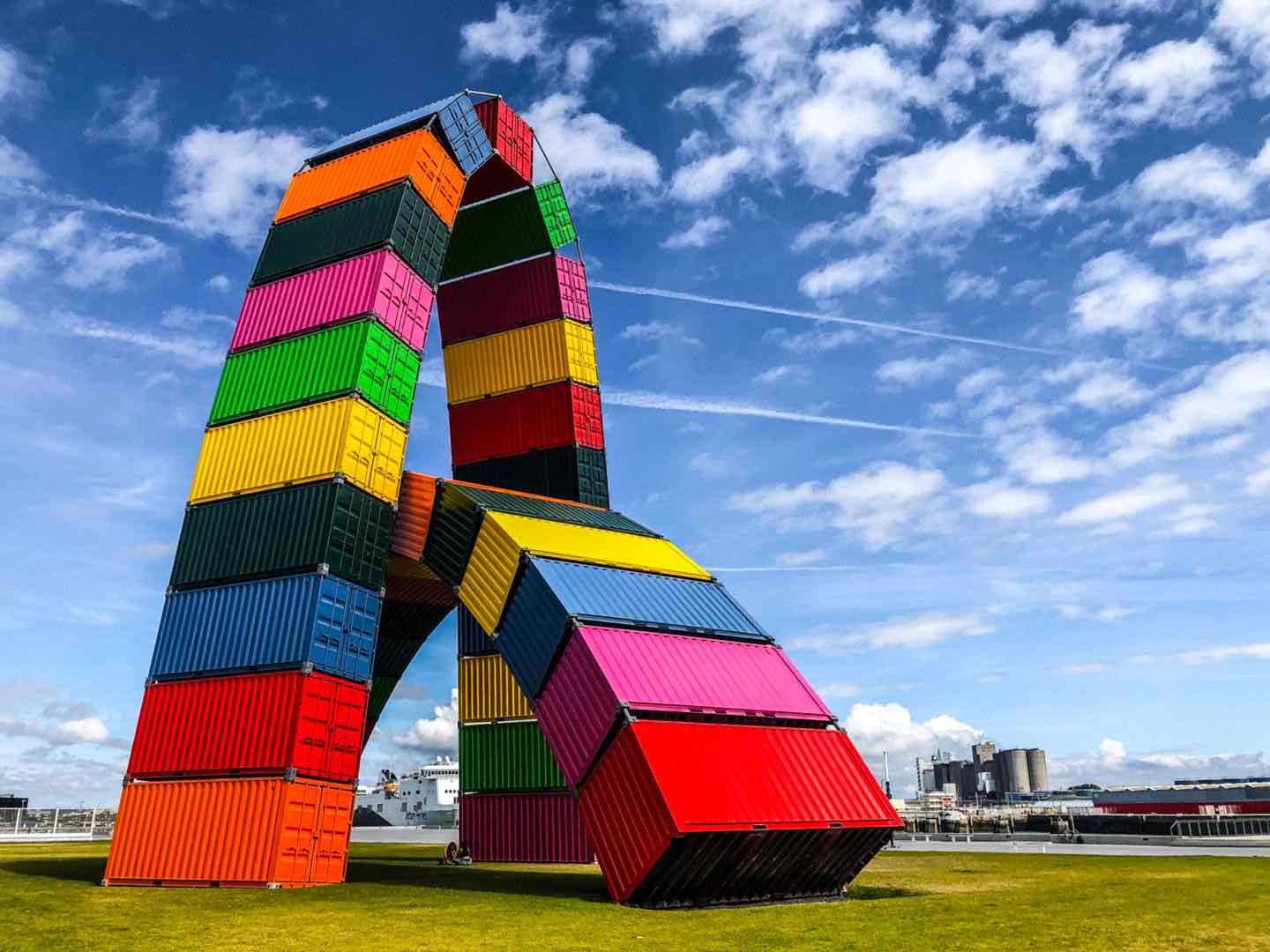 Le Havre is one of the largest ports in Europe, and its Southampton Wharf got a little more colorful in 2017 with the inauguration of Vincent Ganivet’s Catène de Containers, for the city’s 500th anniversary celebrations. This arched sculpture that reaches nearly 100 feet in height is made from 36 shipping containers painted in the colors of the Normandy logo. Featured in Kourtney Roy’s photo series for Galeries Lafayette, this metal rainbow will surely bring a smile to your face. 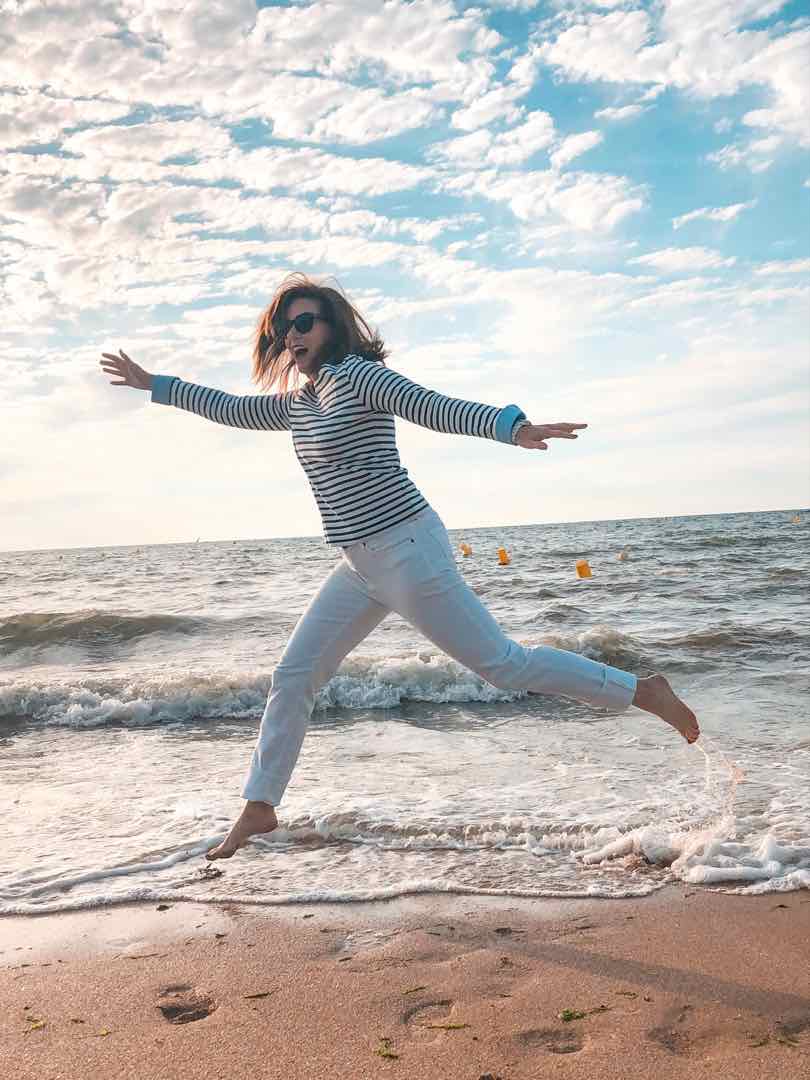 There are plenty of quality products to discover beyond the ones found in Galeries Lafayette. When visiting the region, look for local brands such as Les Savons de Joya, which is a family-owned artisanal soap factory. All of their products are natural, organic, and zero waste. Discover the luxurious line of skin care and candles called Melchior-Baltazar. The natural and organic line is made in Normandy with the best ingredients sourced from around the world. For a fun souvenir, pick up shirts from Cherwood, LH Original, or Jeanne a Dit. 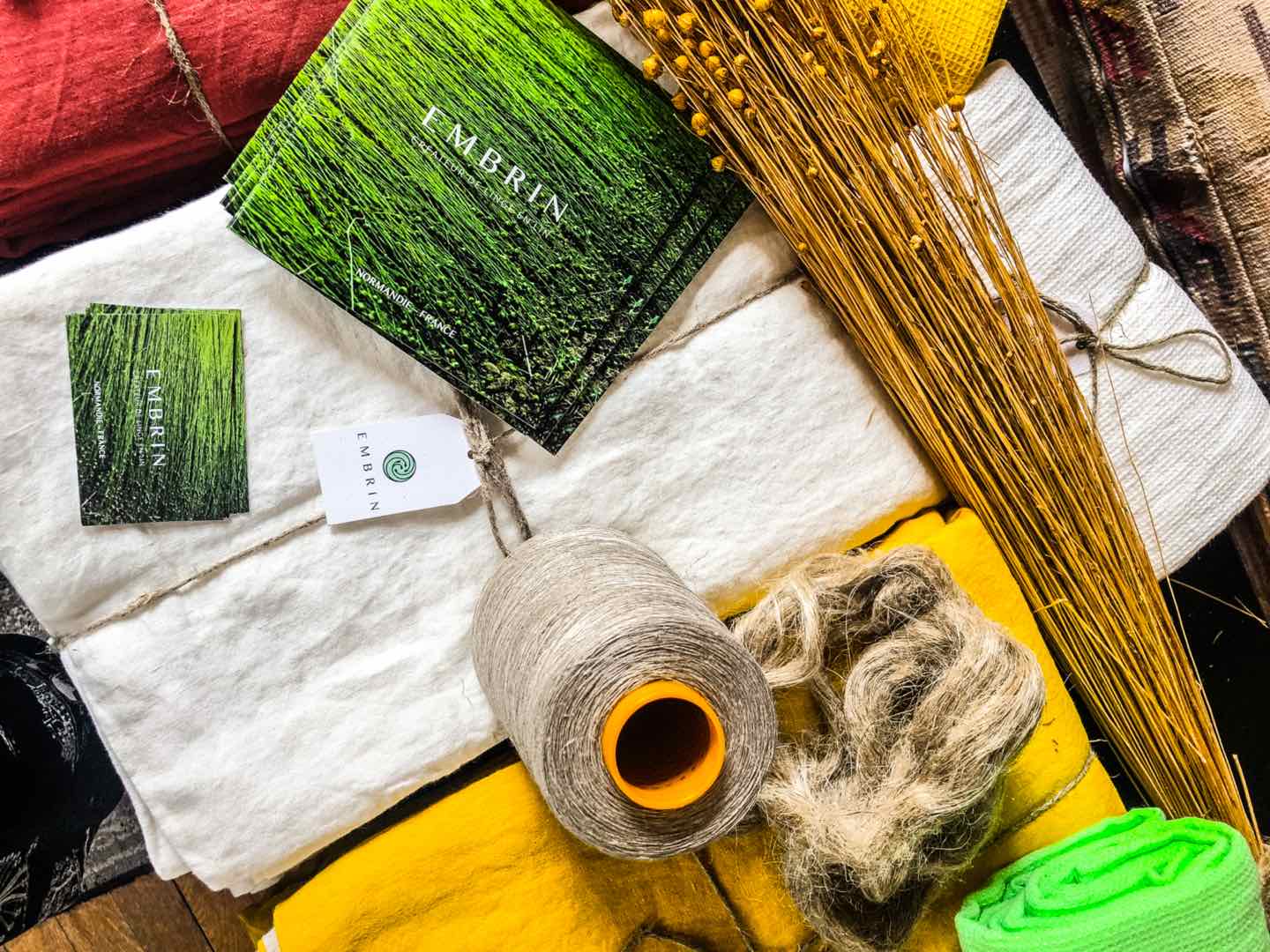 Choose a net bag by Filt. With roots that date to 17th century Norman peasants, the company was founded in 1860 and continues to produce today. Or pick a bag from Grenouille Rouge made from French burlap or linen. Speaking of linen, Normandy produces 50% of the world’s linen! Producing linens made from linen for 50+ years, Embrin is a family-run business, now in its fourth generation in Normandy. 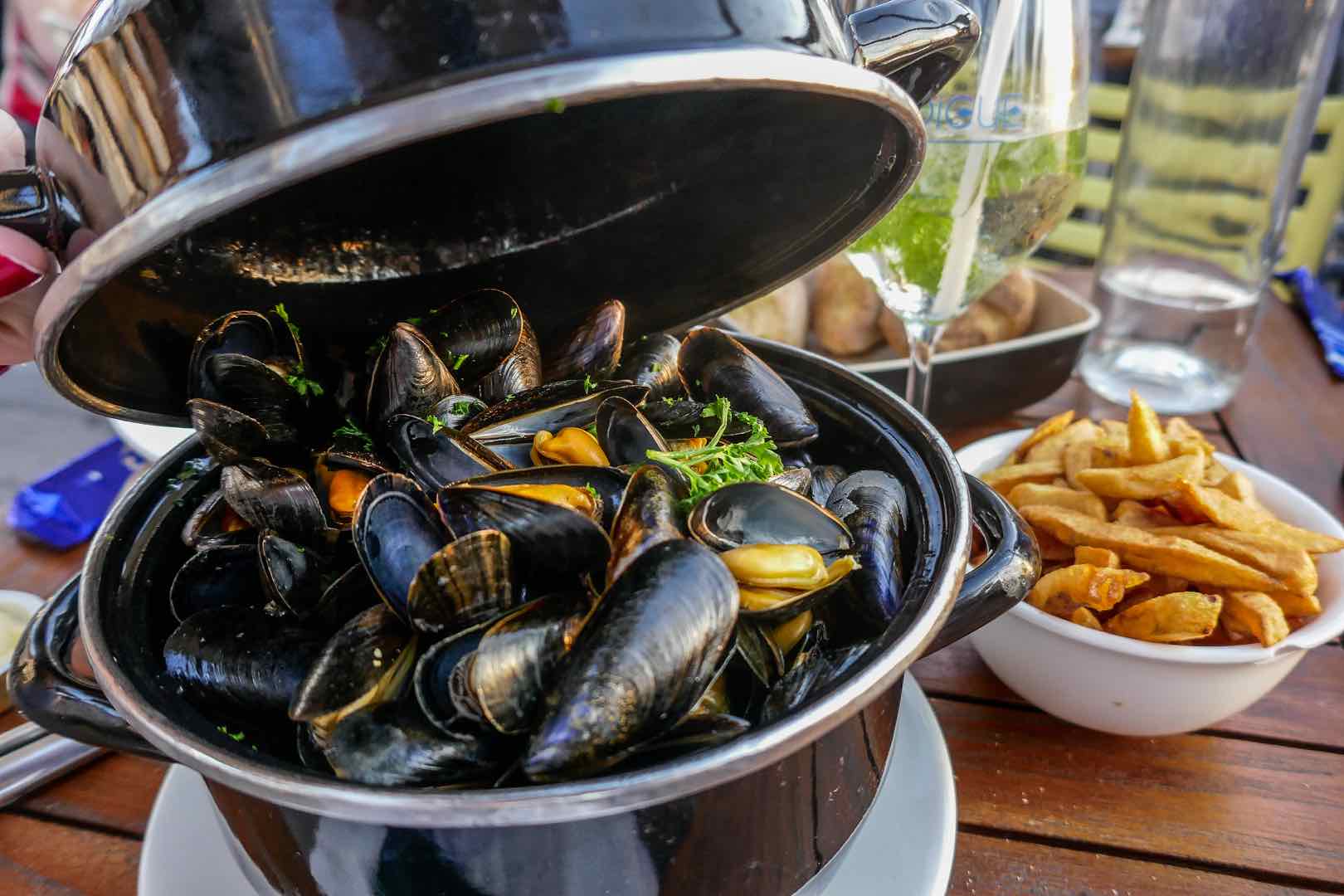 Go on! Hop a train to see some of this wonderful region for yourself.

While in Normandy, I stayed at Manoirs Portes de Deauville. This recently opened property is located just outside of Deauville and is the perfect respite from busy Paris.

This post was brought to you by Galeries Lafayette. While in Normandy, I was guest of Normandie Attractivité. In no way was I swayed by the Calvados, fresh sea air, or the Norman hospitality. As always, opinions are mine.