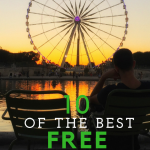 Paris is one of the most luxurious places in the world. From Chanel and Chopard to palace hotels and Michelin-starred restaurants, euros can go rather quickly. Beyond the best of the best, a simple cup of coffee and crêpe costs more than in other cities around France. However, a trip to the City of Light doesn’t have to drain your bank account. Some of the best things in Paris, as in life, don’t cost a thing. Strolling along the Seine and kicking back in the city’s famous parks are a few of my favorites, costing nothing more than my time. But there are plenty more! This week during my Expedia Snapchat takover, I showcased ten of the best free things to do in Paris.

These two museums above Gare Montparnasse explore the Vichy government, French resistance, and the Liberation of Paris from the Nazis during World War II. Named for two French heroes of the resistance, Marshal Leclerc and Jean Moulin, this museum’s unusual location is significant. The old Montparnasse station was the command center for General Lecleric, who was the leader of the French resistance. It is here where the German Governor of Paris {Von Choltitz} signed the surrender orders.

this for future reference

This is not a particularly high-tech museum, but it is filled with artifacts from people who fought and lived through this time, as well as their background stories. There’s a film that shows actual footage from the period, too. The museum is free, but an audio guide costs around €5. There are some English explanations, but forking over the money for the guide will round out the experience, especially if you’re interested in WWII history like me.

Somber and poignant, the Mémorial de la Shoah is a tribute to the French Jews who were persecuted and died during World War II. Located in the Marais, a historically Jewish quarter, the Shoah Memorial opened in 2005. Through photos, videos, and personal relics, the story of the persecuted Jews in France and Europe is told. It’s a sobering visit, but a place not to be missed. It’s powerful and emotional, especially the Tomb of the Unknown Jewish Martyr, the Wall of Names, and the Wall of the Righteous. An extension of this visit is to Mémorial des Martyrs de la Déportation, located on the eastern edge of Ile de la Cité.

I promise that a visit to a cemetery isn’t as morbid as it sounds. Paris has several cemeteries worth visiting, such as the Montparnasse and Montmartre Cemeteries, but it’s Pére Lachaise that’s the most well-known. Located in the 20th arrondissement, Pére Lachaise has more than 70,000 burial plots spread throughout the rolling hills of eastern Paris. It’s part shrine and park, making this a serene and fascinating place to visit. Wander the winding tree-covered paths surrounded by tombs and mausoleums from centuries past. This is the final resting place for Frédéric Chopin, Honoré de Balzac, Edith Path, Oscar Wilde, and Jim Morrison.

Located near Opéra Garnier, in a Napoleon III townhouse, dating to 1860, Musée du Parfum was created in 1983 by the French perfume company, Fragonard. Retaining its late 19th-century feeling, it is here that visitors learn the history of perfume trade, production, and packaging. Discover how perfumes were originally produced through displayed artifacts, versus how they are made now, as demonstrated in videos. Don’t miss the orgue à parfum.

Located across from the Grand Palais, the Petit Palais was originally built for the 1900 Exposition Universelle. Now, it’s the home of the Musée des beaux-arts de la ville de Paris {City of Paris Museum of Fine Arts}. With over 1,000 paintings, sculptures, tapestries, and objets d’art, from the Ancient and Medieval periods, French and Italian Renaissance, and famous 19th century French artists {Renoir and Monet} there’s plenty to discover within the Petit Palais. Make sure to visit Le jardin du Petit Palais and café, too. The permanent collection is free, but temporary exhibits have an admission fee.

I may be in the minority, but Les Invalides is one of my favorite buildings in Paris. The golden dome that sits atop Napoleon Bonaparte’s tomb is extraordinary on a blue-sky day. Once used to house and heal wounded and homeless soldiers, Les Invalides was built by King Louis XIV. Now, it’s still a place for helping war veterans, as well is the location of Musée de l’Armée, Musée des Plans-Reliefs, and Eglise du Dôme {Napoleon’s tomb}.

OK, so a visit to Les Invalides isn’t entirely free. But after you pass through security, the grounds are free to explore. Marvel at the courtyard with its artillery collection, and wander the outdoor covered walkways. Step inside Eglise Saint-Louis des Invalides; there’s no charge to visit. I will say that the museum is well worth the price of admission. The full fare of €11 includes access to the Army Museum’s permanent collections, Eglise du Dôme and Napoleon’s tomb, the Charles de Gaulle Monument, Musée des Plans-Reliefs, and the Musée de l’Ordre de la Libération.

Located in the Passy area of the 16th arrondissement is the former home of French novelist, Honoré de Balzac. This is the last of his homes still standing, and it was here from 1840 to 1847 that Balzac penned La Comédie Humaine. Maison de Balzac is a tribute to the beloved writer. Many of his original manuscripts, illustrations, and original editions are displayed, along with personal mementos of Balzac and his family. Pack a picnic and enjoy the quietness of the house’s garden. It’s a little-known oasis in the city. If there is a temporary exhibit, an admission fee is charged. Check the website before visiting for details.

The mansions surrounding Parc Monceau in the 8th arrondissement are absolute visions. And if you don’t have a spare €20 million laying around, you can still get a taste of what it would be like to live in a maison particulier by visiting Musée Cernuschi. Located on the edge of Parc Monceau, this private museum was created by Henri Cernushi in 1896, when the financier bequeathed the mansion, as well as his collection of Far East art, to the city. Acquired through Cernushi’s travels, the museum contains ancient pottery, jade and ivory items, and bronze statues from China. The original collection has been expanded though donations, making Musée Cernuschi second only to Musée Guimet in terms of Asian art in Paris.

Don’t visit the museum without taking a stroll through Parc Monceau. My favorite spot in Paris, Parc Monceau dates to the 17th century and was created by the Duke of Chartres. Elegant and quiet, this park is filled with surprises, from the golden gates to the diverse statues to the Renaissance archway that once stood at the former City Hall of Paris. There’s even a small replica of Venice’s Rialto Bridge.

With the exception of Sainte-Chapelle, all of the churches are free to visit in Paris, including Notre Dame and Saint-Sulpice. So why did I choose Sacré-Coeur as the one to visit? Located in Montmartre, one of my favorite parts of Paris, the Roman-Byzantine basilica is an iconic building in the city. Its mosaic ceiling is the largest in France and the pipe organ is massive. But in a city filled with marvelous churches, Sacré-Coeur stands out for its location.

As the highest point in Paris, on the top of Butte Montmartre, the panoramic view is worth the climb. Not much can compare to sitting on the steps with the massive white basilica behind and the whole of Paris in front, especially at sunrise and sunset. If you’re so inclined, ascend the steps to the dome for an even higher vantage point {for a fee}.

Wallace Fountains are found throughout Paris and are a symbol of the city. Named after Englishman Richard Wallace, who financed their construction, the fountains were meant to give everyone in the city access to clean water. They are usually dark green, but in some parts of the city, you’ll find the fountains painted pink, orange, or red. Bring a empty bottle and fill it up with fresh water when you spot a fountain.

Visiting Paris doesn’t have to be expensive. There are a multitude of fantastic options for those looking to save a bit of money. Honestly, other than buying food and drink, I could spend days enjoying Paris without spending a single euro, simply by opening my eyes and setting out on foot. I believe the best free thing to do in Paris is to get lost in her beauty, and that doesn’t cost a thing. But, it’ll surely make you feel like a million bucks.