Paris isn’t just a city. For me and a few million other people, it’s the place that we live, work, and call home. Most Parisians I know have a love/hate relationship with France’s capital. Whether they’re born and raised within the périphérique or came for studies and jobs from other parts of France and the world, many can’t wait to escape to Normandy, Provence, or really, anywhere that isn’t Paris. As someone who’s in love with the City of Light, I find myself perplexed.

How could someone not love Paris? Many of the reasons I hear include traffic, cost of living, apartment size, quality of life, noise, and other Parisians. Certainly, one of the frustrations is with tourists. According to the Paris Tourism office, in 2015 there were 22.2 million hotel arrivals in the greater Paris area, over half of which came from foreign countries. Throw short-term apartment rentals into the mix {AirBnB’s biggest market is Paris}, and the number of tourists must be higher. And despite the terror attacks, which have cost the city €750 million in the last six months, Paris and France hold the crown for the most visited city and country in the world. Tourism is a double-edged sword for many Parisians, because visitors spend money, which creates jobs.

Given that August signals vacances and most of its citizens are sunning themselves on a beach somewhere, Paris is virtually empty. Well, not totally empty; there are plenty of tourists. Strip away all the locals and Paris looks and feels a lot different—like almost unrecognizable. This is my second August in Paris, and I kind of like the change of pace that summer brings. Though, with the absence of Parisians, visitors really stand out among the crowd.

I’ve gotten pretty good at guessing where people are from based on clothing and behavior, both good and bad, but the latter really stand out. I don’t think people set out to be bad tourists, but rather it’s a lack of knowledge and understanding.

“Paris is not a museum. Visitors forget people live in the city,” reminds a Frenchie and Paris resident of 30 years. So, in order to save you from the pffts, lip pursing, shoulder shrugs, and putains of Parisians, I’ve asked several locals {Frenchies and expats}, “What annoys you about tourists in Paris? What do you wish tourists knew?” And did they answer! Thus, here are five ways to be a better tourist in Paris.

Paris is the fashion capital of the world, but don’t think that every day is a Chanel show. Just step foot in the metro and you’ll see exactly what I mean. However, men and women are generally better put together than most other places. For instance, you’re not going to see people wearing yoga pants, unless they’re actually doing yoga. French see putting thought into your appearance as a sign of respect for those around you. “In Paris, one dresses up for dinner and a show. I do find the excessive ‘comfort’ oriented dress for theater, show, dinner, or cocktails often very inappropriate and utterly disturbing!” believes one Belgian expat.

Even if it’s just a quick trip to the post office, French are basically dressed in what would be considered American business casual. “I think my biggest ‘hate’ is how sloppily tourists dress. My all-time worst would have to be flip-flops. Those things are disgusting outside of a pool or off the beach. No one should be traipsing around the city in them. A little bit of self-respect is in order, non?” says a 13-year Paris resident, Pennsylvania native, and French citizen. “Baseball caps are another annoying thing,” he adds.

A common thread among all the answers has to do with walking. Sounds like a simple thing–one foot in front of the other, right? Not so fast, my friend. Well, actually, yes, speed it up! “People live and work here, so get off the f*%#ing sidewalk if you’re going to dawdle,” says a Canadian expat living in Paris for six years. Equally frustrated by the slow, oblivious tourists is a twenty-year resident. “Walk like a Parisian and don’t f&%@ing stop all the time; don’t stand in the middle of the street for selfies; and don’t try to reach the Arc de Triomphe by walking on the roundabout!”

Yes, Paris is stunningly beautiful, and every 50 meters, there’s something worth Instagramming and Snapchatting. However, stopping in the middle of a walkway is akin to slamming your car breaks in the middle of the street. “Look around all the time to make sure you’re not blocking others on the sidewalk or in the metro, as you take photos or stand aimlessly waiting for the bus,” says the American wife of a Frenchie.

Personally, I’d like to add that just because you’re a group of three or four doesn’t mean that you have to walk shoulder-to-shoulder, taking up the entire sidewalk as you saunter down the Seine. Causing others to step into the street to get around you is both rude and dangerous.

If complaining was an Olympic sport, the French would be gold-medal contenders. However, when the French complain about their country, it’s OK. As a visitor, it’s considered rude. As a three-year Paris resident from the American East Coast explains, “MANY Frenchies understand English, so you aren’t hiding the complaining by speaking in English. Everybody hears you and finds it irritating and offensive. Expect that the systems are different here. Stop complaining that things aren’t the way they are in your home country; be open to the differences.”

A German expat echoes that sentiment. “Don’t expect everybody to behave like in your country–other countries, other cultures.” A New Yorker living in Paris for eight years adds, “…tourists have a sense of entitlement. They are guests here; act like one. You’re an ambassador of your country as a visitor!”

One thing that I’ve especially become accustomed to is the soft-spoken voices of the French. When I go back to Texas, my ears bleed from the loud music and even louder conversations in restaurants. Seriously, French just speak more quietly than other nationalities. “I find visitors to speak very loudly, especially Americans,” explains one expat from the USA. Perhaps this part of the French culture developed out of necessity {Have you seen how close the café tables are?}, but it’s a nuance that’s quite important. Thus, when in Paris, remember to speak softly, especially in enclosed spaces.

I’ve written on numerous occasions about the food culture in France. Meals here are meant to be savored. With the exception of a crêpe, food is not eaten on the go. Drive thrus don’t exist to my knowledge, and it’s rare to find a French place that will put your coffee in a to-go cup. “Slow down at restaurants and stop complaining about the service. Start to expect, and learn to enjoy, a slow meal; the waiters think you want to take your time. It’s part of the culture and part of why Parisians are skinny!” proclaims an American expat. Also, keep in mind that the waiter isn’t being rude by not bringing the check. On the contrary, bringing the mealtime check without being asked is seen as rushing the customer. When you’re ready to leave, catch the waiter’s eye and say, “L’addition, s’il vous plait.”

It may come as a surprise, but doggie bags just aren’t part of French culture. In fact, this year France passed a law mandating that eating establishments serving over 150 tables per day must provide take away packaging. The law was passed in an effort to curb food waste, but since the law was enacted, I’ve yet to see a Frenchy’s leftovers packaged. Another thing, French aren’t really ice people, unless it’s in a cocktail or swimming in their rosé on a hot day. Order a Coke, and you’ll get a lemon slice and maybe one ice cube. Just go with it.

One lifelong Parisian wants visitors to step out of their comfort zones and taste what France has to offer, which is more than croissants and macarons. “The simplest things are often the best things–enjoy a good picnic.” Indeed, Parisians love a good picnic. No need for an elaborate setup, just stop by the fromogerie, boulangerie, and boucherie. Remember some fruit and a bottle of wine. With Paris as your backdrop, there’s no way you can go wrong.

And Some Positive Words

I didn’t just hear negative comments. There were plenty of positive ones as well. One Paris native said, “I like the fact that tourists visit Paris and love her.” Another believes “…tourists to be less annoying than Parisians. I find tourists to be in a constant state of elation, mostly cheerful and enthusiastic.”

Frankly, I’m in agreement with the complaints and praises. Though sometimes frustrating, I enjoy seeing visitors fall in love with Paris. It reminds me of how fortunate I am to live here. So please, visit Paris, take your selfies, but for the love of God, FORGET THE LOVE LOCKS. 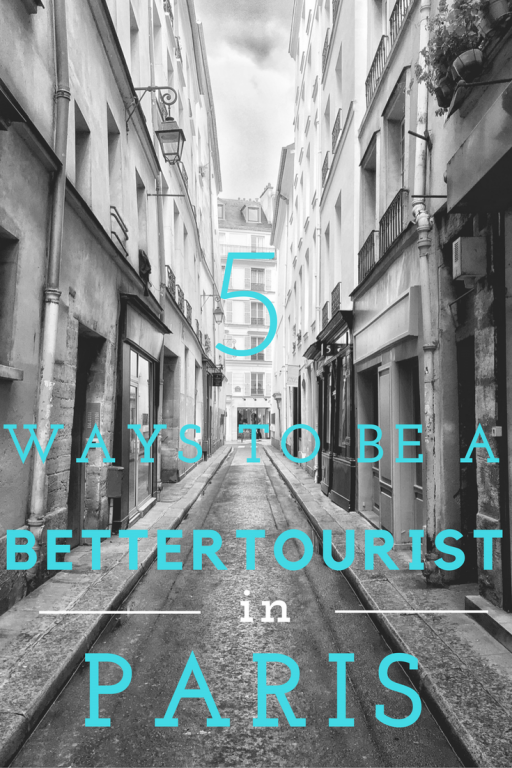 A World of Color: Malaysia in Gold