Paris is a paradise for food lovers. Most visitors don’t even scratch the surface when it comes to all the yummy treats the city has to offer. Or, they waste stomach space on junky food. Yes, there are plenty of sub-par pâtisseries and cafés waiting to take your money and your daily caloric intake. I recently took over the Expedia Snapchat account, where I gave a food tour of Paris. I spotlighted a few of the famous French foods, particularly those in the carb category. I couldn’t begin to show all of my favorites, so here’s an more in-depth guide to the best foods to eat in Paris and where to find them.

Forty years ago, the average French person ate one baguette per day. Today, it’s down to half of one per day. Despite the lower consumption, the place of bread on the French table has not diminished. Where else is a basket of bread served with a hamburger? It’s not a cliché to see the French walking around with a baguette or two under their arm or long lines at the boulangerie after work and on Saturdays. Meaning ‘wand’ or ‘stick,’ the baguette is fiercely controlled by the government. From the ingredients to the weight to the price, bread is serious business. There are two main types: baguette de tradition {rustic in appearance} and baguette ordinaire {made only from yeast, salt, and four}.

The croissant feels as French as the Eiffel Tower, but in reality, the flaky treat was inspired by the Austrian kipfel. It was the young royal from Austria, Marie Antoinette, who introduced the croissant to France. It’s best to buy your croissants before 10:00 am and always opt for croissant au beurre, which is made with butter and is straight, as opposed to croissants ordinaires, which are often crescent shaped and made from margarine. There are a bajillion boulangeries in Paris, so how does one choose? When in doubt, look for an artisan boulangerie, which means that the bread is made on the premises.

French General Charles de Gaulle once said, “How can you govern a country which has 246 varieties of cheese?” In reality, there are up to 450 distinct types of cheeses. Within that number are eight categories; thus, it’s plausible that France is home to about 1,400 different cheeses. French cheeses are made from the milk of cows, goats, and sheep, and are pressed, soft, and blue. With so many choices, it’s best to visit a fromagerie, preferably with a cheese monger who’s been awarded Meilleurs Ouvriers de France {MOF for short}. These people are the best in their field and experts. After you’ve picked up the fromage, know that there are rules as to how to slice the cheese. It’s France, after all, and there are rules about rules here.

Show me someone who doesn’t swoon over a pretty pastry in Paris, and I’ll show you someone with no taste. Kidding…sort of. French pastries are legendary and just as beautiful as they are delicious. Pâtissiers are artists and sugar, eggs, and flour is their paint. There is no shortage of pâtisseries in Paris, and Parisians are fiercely loyal to their favorites. The most successful and enterprising pastry chefs have multiple shops throughout the city, but don’t look past the others. When in doubt just try them all. After all, life is short. Eat dessert first.

Thank you to Mexico for giving the world chocolate. Thank you to the Spanish for bringing it to Europe. And thank you to the French for perfecting it. Ok, so Switzerland and Belgium make some fabulous chocolate, too, but I don’t live in Geneva or Brussels, do I? Whether dark or milk {Forget white. It’s not even real chocolate}, chocolate takes on a new meaning in the shops in Paris. Forget the three for $1 bars in the USA; one piece will leave you satisfied, though wanting more. Fortunately {and unfortunately}, the best chocolate shops are all located in my neighborhood, Saint-Germain-des-Prés. A walk in the 6th arrondissement is like being sucked into Willy Wonka and the Chocolate Factory. The 8th arrondissement may have all the big tourist sites, but the 6th has the legendary chocolate shops.

There are tons of weekly markets around Paris. They have specific days that are set up in various locations. Meat, fruits, vegetables, fish, cheese, etc. are bought under tents, sometimes straight from the producer. However, if you don’t have time to chase down these markets, check out two of my favorite places to prowl: La Grande Epicerie de Paris by Le Bon Marche and Galeries Lafayette Maison/Gourmet. These two legendary department stores have gotten into the food game with multi-level shops dedicated to deliciousness. Wine, fresh produce, bakeries, butchers, tiny restaurants, wine, and specialty items galore grace the shelves of these massive emporiums. They’re great places to buy souvenirs on the Left and Right Banks.

I must warn you: Do not walk down any of Paris’ great food streets on an empty stomach. It’s dangerous! Often pedestrian only, food streets are lined with numerous specialty shops such as boucheries, boulangeries, fromageries, pâtissieries, fish mongers, fruit and vegetable stands, flower shops, and even places that simply sell meringue or Chantilly. This is France, y’all, and finding the best means multiple stops, hence the popularity of the food street. On Saturdays, these places are packed with Parisians and their wheeled carts. Take a stroll down one, and I dare you not to drool.

I’ve said it time and time again. The best way to know a country and its culture is to take a cooking class or a food tour. Food is a connector, and learning about the traditions and flavors offer insight into a place. I’ve taken numerous cooking classes and market tours around the world, and these are the first things I research when planning an itinerary. I’m not much of a chef, but taking the classes and tours raise my appreciation of the food I eat, especially in France, where food is a religion. Sign up for a sauce or pastry class. Visit a market with a local. Take a tour focused on your favorite treat, whether it’s chocolate, cheese, wine, or pastries. It will leave you with a deeper understanding of the place you’re visiting and a full belly.

Tea time feels traditionally British, and maybe it is. But if the British invented it, the French certainly perfected it. For me, tea time is about everything except the tea. Yes, sure, I go through the motions and pick out an exotic tea with blooming flowers in the pot. It’s pretty and tasty, but really I’m all about the Champagne, petit pastries, and savory sandwiches. There are some gorgeous tea times in Paris, especially in the Palace Hotels. Though, don’t forget Angelina and their famous hot chocolate. This decadently delicious addiction is dangerous and will make you turn your nose up at tea and Champagne.

Dining with a View of Eiffel Tower

Is there a more beautiful woman in Paris to share a meal with than Madame Eiffel? Surely not! If you’re anything like me, the site of the Iron Lady never gets old. Dining with a view of of the Eiffel Tower’s twinkling lights is a luxury and quite rare. Often restaurants with such an extraordinary view are all sizzle and no steak. Meaning, it’s all about the view, but the food is an afterthought. That’s not necessarily the case in Paris, as long as you choose wisely.

So, there you have it! I’ve certainly not covered all of my favorite foods or places to eat them in the City of Light, but this guide is a good start for visitors looking to try some of the best foods in Paris. What are some of your favorites? Tell me! I love trying new places.

*Denotes the places I visited during the Expedia Snapchat takeover. 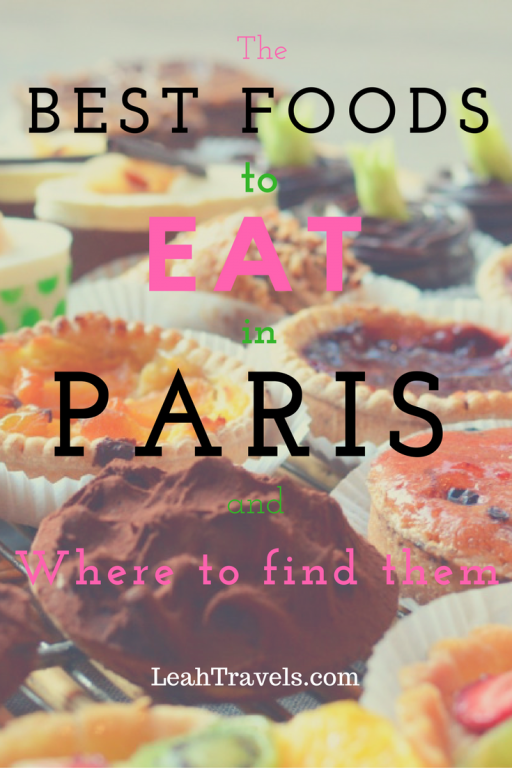