Along with terrace sitting and pétanque, picnicking is a national sport in France, especially in Paris. Much of this tradition goes back to the French Revolution, when the royal gardens and parks became public. Plus, have you seen the size of most Paris apartments? Green spaces in Paris are the living rooms and backyards for Parisians. Picnicking in Paris is much more than throwing a couple of PB&J sandwiches, some Cokes, and a bag of chips into a grocery sack. No, like all things French, there are rules as to how to pack a picnic in Paris.

How to Pack a Picnic in Paris

The best places to have Parisian picnics include parks, gardens, and along the water. Opt for green spaces that actually allow you to step foot on the grass, i.e. not the Tuileries and Luxembourg Garden. Along the Seine is quite nice, as are the Champ-de-Mars and Canal Saint Martin. No matter which setting you choose, you’ll want a blanket. It’s not essential, but makes the experience even more enjoyable. Since I live in Paris, I have a lovely picnic basket from Les Jardins de la Comtesse. Also find a similar one here.

The Holy Trinity of French picnics includes bread, cheese, meat, and wine. OK, so that’s actually four things and not technically a trinity, but you get the idea. These items are the basic elements for a perfect Paris picnic. Of course, this is France and the variety of bread, cheese, meat, and wine is eternal. It can be down right daunting to choose, but don’t fret. It’s not like you’re choosing the next president or anything. It’s just food. 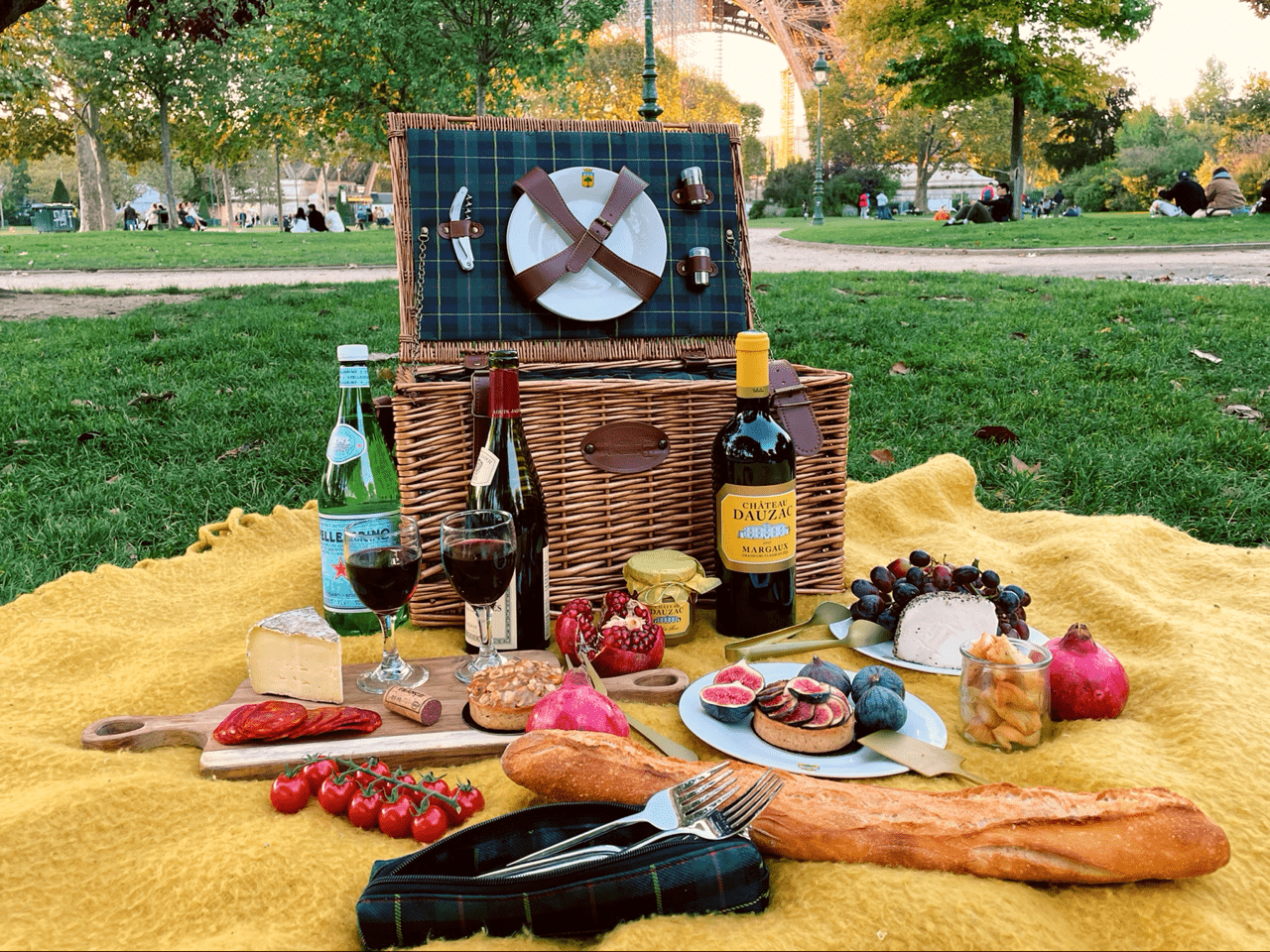 Despite the drop in consumption, bread is as essential as oxygen in France and always part of a Parisian picnic. In my recent article, “The Best Foods to Eat in Paris {and were to find them},” I explain the two main types: baguette de tradition {rustic in appearance} and baguette ordinaire {made only from yeast, salt, and four}. But where to get the best bread? Ask ten Parisians and you’ll get ten different answers. Look for an artisan boulangerie, which means that the bread is made on the premises. Apparently, the bread should produce a crunchy sound when squeezed and be golden brown in appearance. A baguette per two people is probably enough, unless you’re carb loading for the Paris marathon.

The other day I was at my favorite fromagerie picking out a chévre. Surrounded by creamy goodness and enveloped with the distinct smell of fromage, I chatted with the cheese monger. As a Meilleurs Ouvriers de France, he has been awarded with the highest artisan award in the country. With around 1,400 different types of cheeses, it’s helpful to enlist the help of an expert. I walked in looking for a goat cheese and walked out with a Brie. Whether made from cow, goat, or sheep milk, the selection is seemingly endless. Pressed, soft, blue…get a variety. Just be warned. On a sultry summer day, a soft cheese could get messy really quickly. My go-to picnic cheeses include Comté, Crottin de Chavignol, and Brie de Meaux. 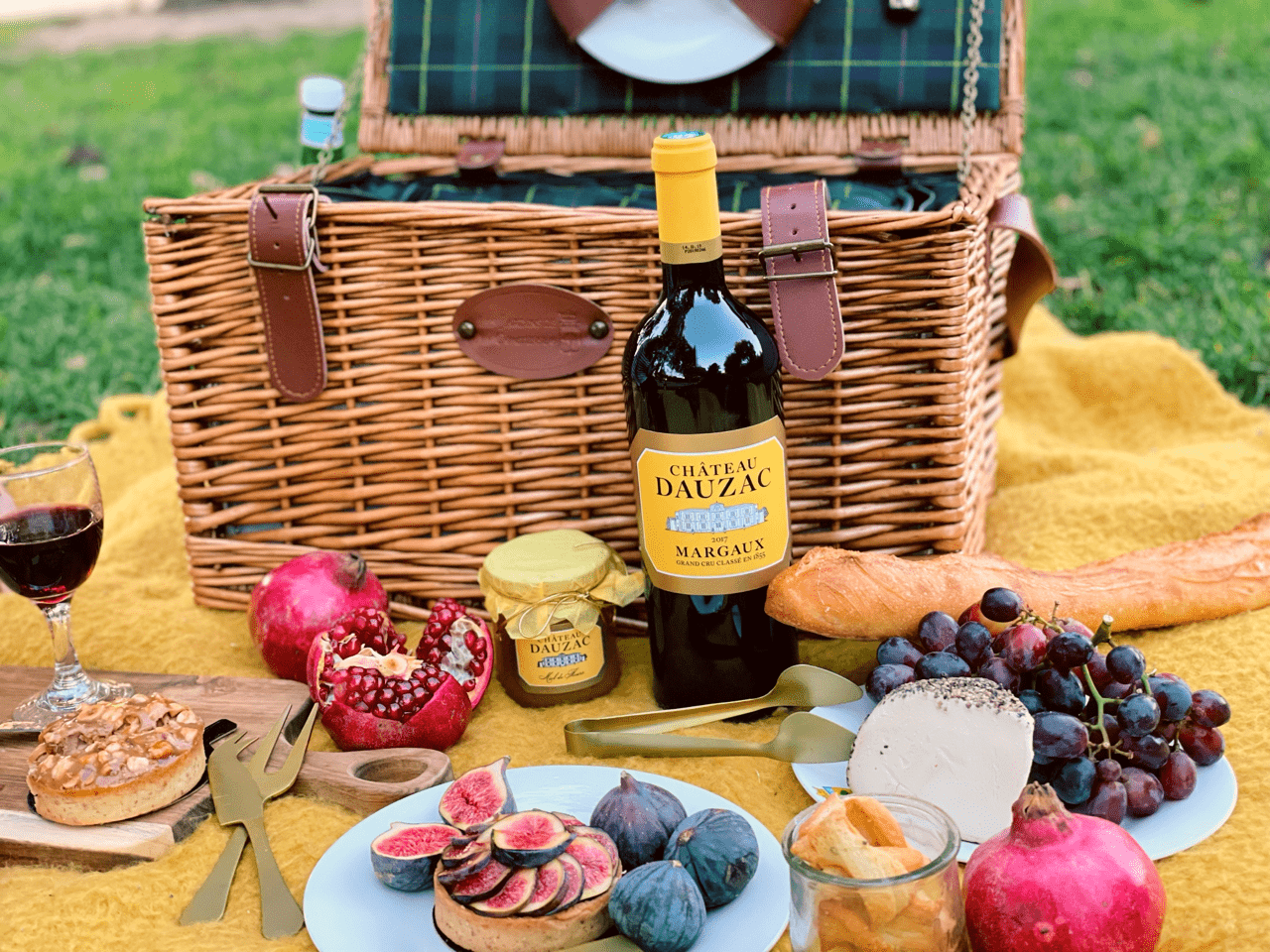 Charcuterie in France is art, a smorgasbord of savory goodness. And when packing a Paris picnic, the sky is the limit when it comes to protein. Pâtés, terrines, rillettes, boudin, jambon, saucisson, and mousse {yes, meat mousse!} are some options. Within those categories are countless variations of meats, seasonings, and preparation. This is France, so nothing is clear-cut. Perhaps the standard picnic fare is saucisson, which is a dry-cured, fermented pork salami. It packs a flavorful punch and doesn’t need to be kept cold.

The French have an undeniable obsession with fresh. Ask about a market or restaurant, and they will absolutely mention the freshness of the products. Coming from the land of processed foods, it’s a refreshing change. Not only do fruits and vegetables help off set the calorie consumption from the bread, full-fat cheese, and cured meats, but they’re also low maintenance. Just wash and go.

Cherry tomatoes, berries, baby carrots, cucumbers, pears, and cherries are just a few ideas. The key is to pick what’s in season. How do you know what’s in season? Well, you’ll see plenty of the items all over markets and menus. The French are really good about making the most of seasonal fruits and vegetables, many of which are grown around France. Pick up some hummus or a tapenade to go with the veggies 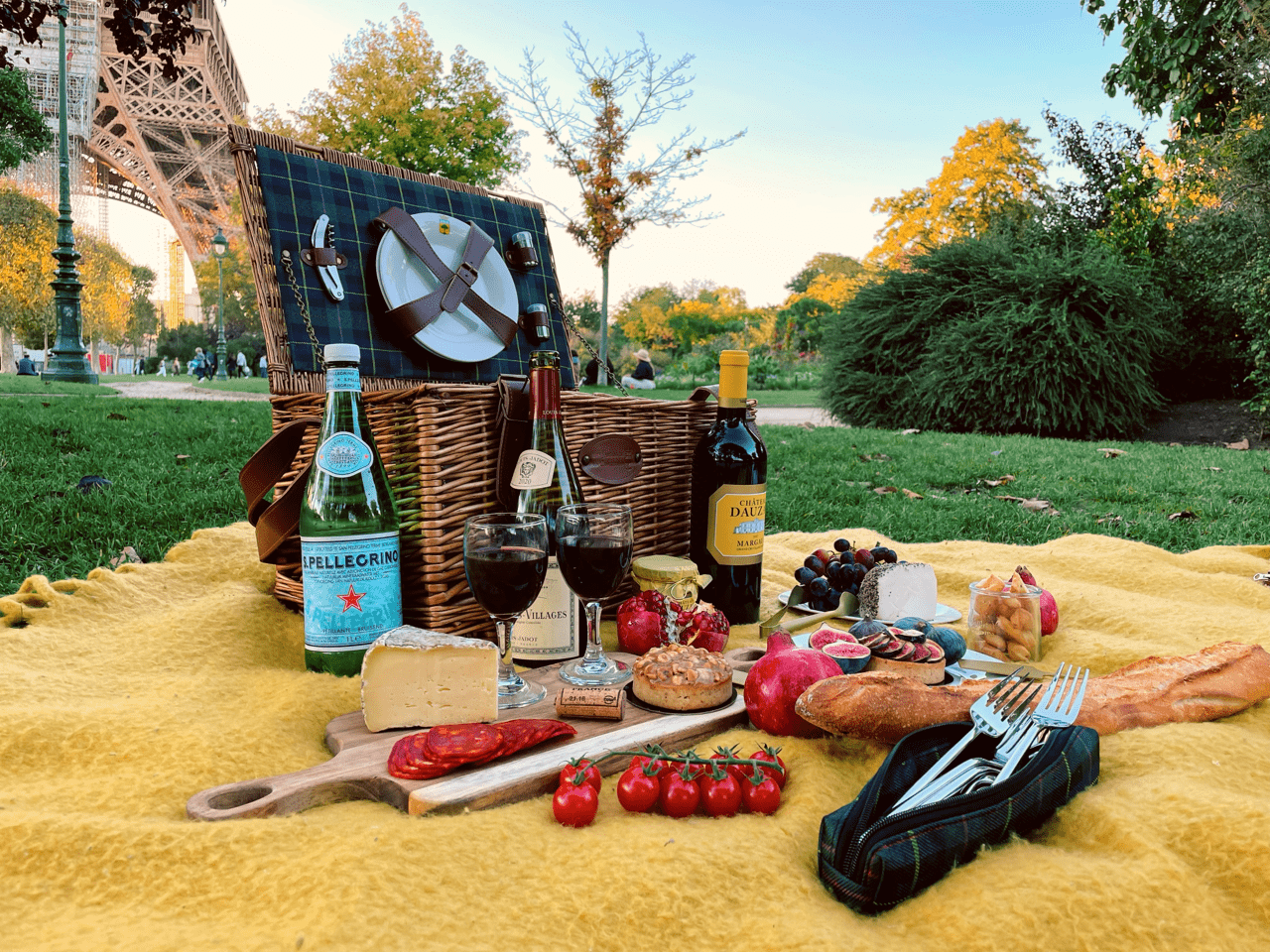 Drinks for a Picnic in Paris

It’s impossible to have a perfect Paris picnic with out something to drink. Undeniably, wine is the most popular choice. In the summer, bottles of rosé fill the store shelves and disappear just as quickly. It’s a light, refreshing, and inexpensive choice. Of course, I love rosé from Provence. It’s the birthplace of the pink vin, producing some of the best bottles in the world. {Learn more about rosé wine from Provence.}

When it’s not rosé season {yes, there is an unofficial season for rosé}, look to white wine for something served chilled. I gravitate toward whites from Bourgogne, Alsace, and the Loire Valley. Of course, a nice brut Champagne is always a welcomed addition to a Paris picnic.

Red wine is actually my favorite, but can be quite heavy in the summer. Once the temperature drops, I like a rouge from Bordeaux like Château Dauzac or Pinot Noir from Burgundy or Sancerre. Although Sancerre is most famous for its Sauvignon Blancs, I really enjoy their reds {read more about Loire Valley wines here}. Don’t overlook options for red from Provence, either. Red wines don’t need to be kept cold and pair nicely with the meats and many of the fruits. 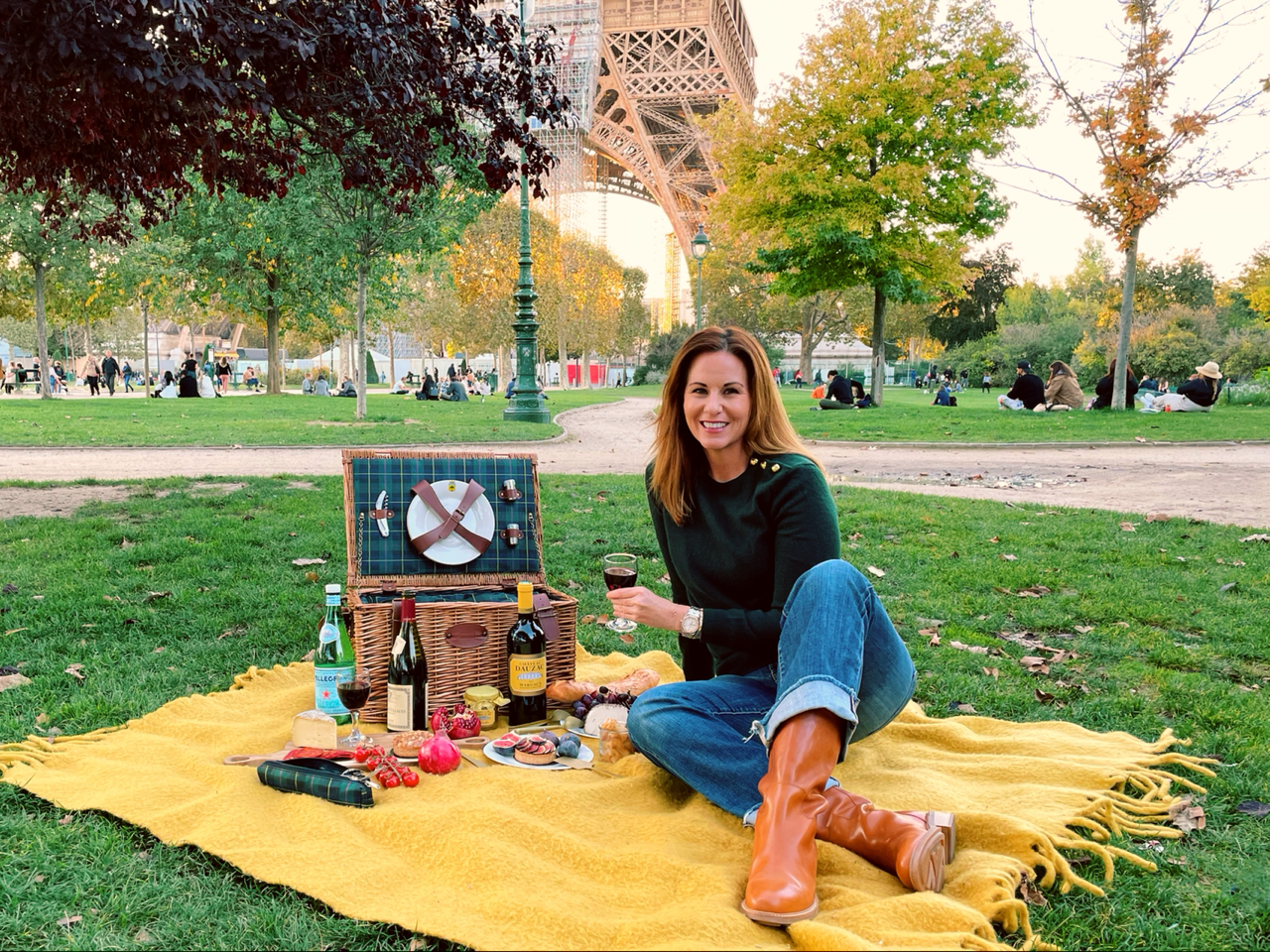 Not a wine lover? Don’t fret! Beer is also acceptable, especially on a hot summer day. Kronenbourg, 1664 is the best-selling French beer, and Heineken is everywhere. Enterprising rogue street vendors carry around twelve packs of the Dutch beer, selling individual bottles at a premium price, so make sure to bring your own supply. A bottle of water, either still or sparkling, is also good to have. Once you’ve finished off the bottle, fill it up for free at one of the Wallace Fountains located around the city.

So, there you have it: How to pack a picnic in Paris. However, picnicking in Paris isn’t just about stuffing your gullet with food and swilling wine. Instead, it’s a social tradition, part of the French joie de vivre. With a few key supplies and a picture-perfect setting, the only thing to add are great people, and perhaps busker music playing in the distance.