Thanks to Kensington Tours and my most recent trip to Paris, I learned how to make French macarons in Paris. Now I know why one little Ladurée macaron costs more than €2 each. In short, making macarons is hard work. 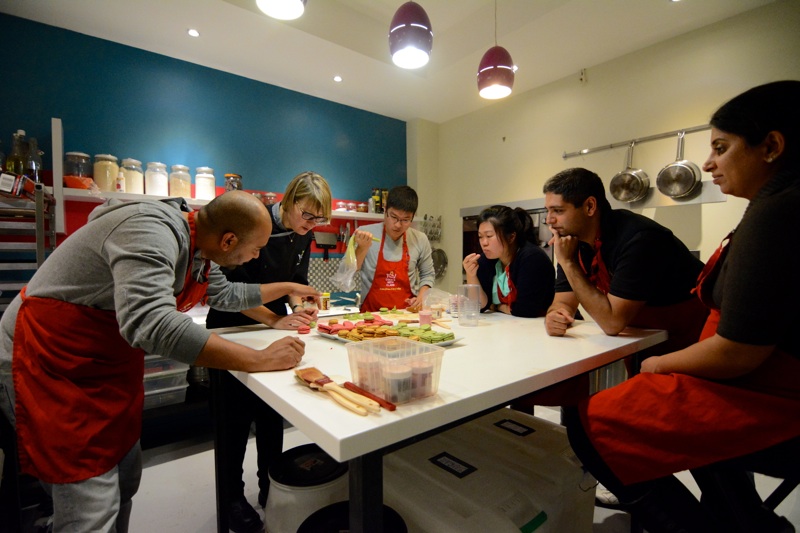 Perhaps baking macarons isn’t as difficult as digging trenches with a teaspoon, but it’s certainly not easy. The process from start to finish requires more steps than getting to the top of the Eiffel Tower. I might never give Buddy Valastro {The Cake Boss} a run for his money or be mistaken for Mrs. Field’s, but I can certainly jazz up a Betty Crocker boxed cake mix in a way that would make Semi-Homemade Cooking’s Sandra Lee fight to lick the bowl. 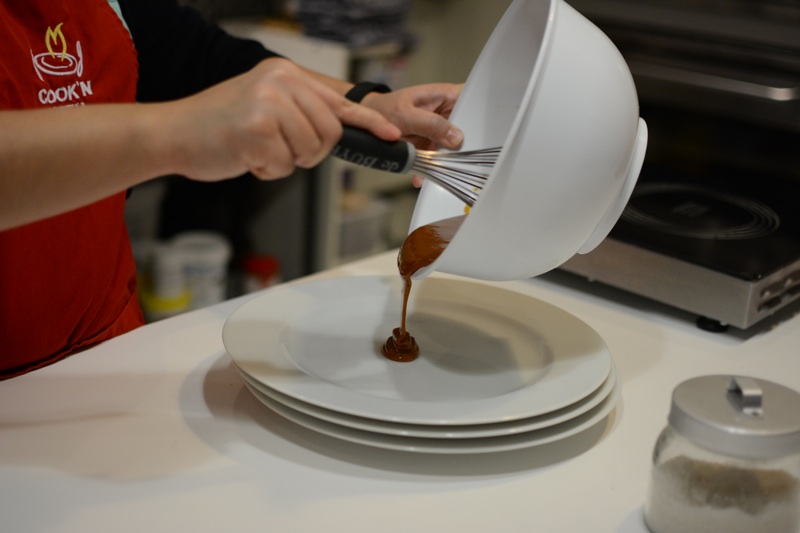 Given my love affair with all things French, I jumped at the chance to make France’s most beloved dessert. Although, legend has it that the macaron was actually brought to France from Italy by Catherine de’ Medici when she tied the knot with Henry II back in the 1500s. However, it wasn’t until the early twentieth century that the macaron as we know it today {a pastel miniature hamburger} was created and sold at Ladurée, the famous Parisian tea salon. Thus, the Italians may have invented the macaron, but the French certainly perfected it. 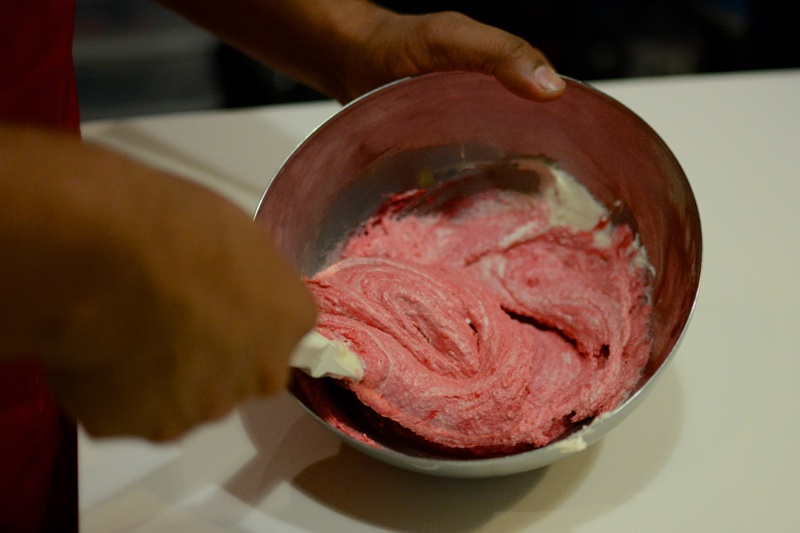 Armed with an apron, a sense of excitement, and a raging sweet tooth, I prepared myself for the three-hour macaron lesson at Cook’n with Class. Led by the talented and very patient, Emmanuelle Gombert, I was set to learn all about this perfect Parisian pastry. I was confident that after one class I could set up my own Houston bakery and corner the city’s macaron market. Obviously, that one bakery would develop into a mammoth mail order business, where my macarons would topple all competition, including Ladurée. 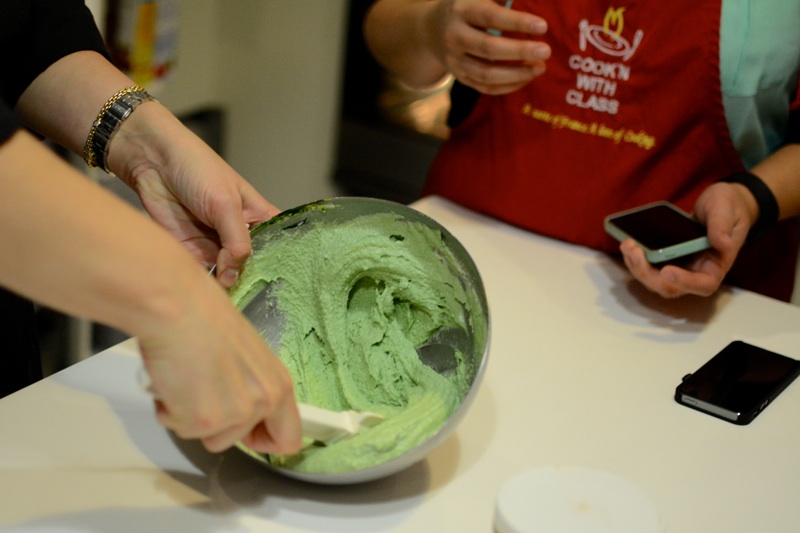 In the first five minutes of the class, my delusions of grandeur were dashed with the making of homemade caramel. There would be no melting of Brach’s ten-cent Milk Maid Caramels in the microwave or any other sort of short cuts. That’s not the French way, you know. There were five other people in my class feverishly taking notes, including one guy who owns bakeries in Amsterdam. Obviously I was in over my head. I knew I’d never make tiny little pastel hamburgers on my own, so I decided to just take it all in and eat the results. 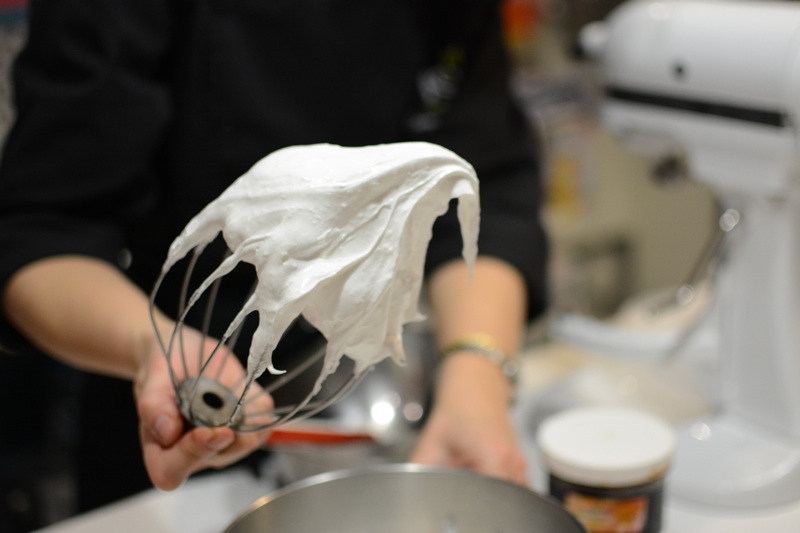 Salted caramel, white chocolate rose ganache, and white chocolate pistachio ganache macarons were on Emmanuelle’s menu. Pots, whisks, metal bowls, blenders, and ingredients I never knew existed filled the workspace. The first order of business was to create the three different flavored fillings, since these needed time to cool off before being piped into the shells. The mixing was made quick work of with Emmanuelle delegating the duties to the class—she’s no fool. 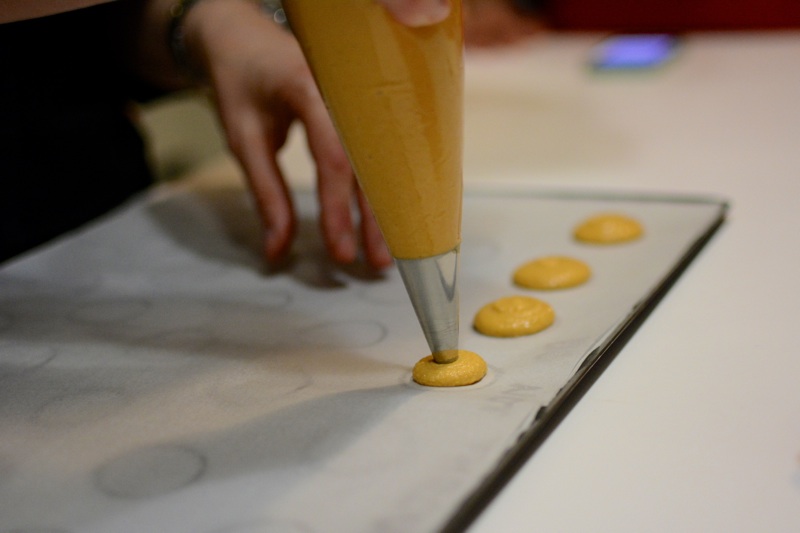 I breathed a sigh of relief when the Kitchen Aid monster mixer was brought out. There were egg whites that needed to be beaten. I’ve watched enough of the Food Network to know that the arm strength and endurance needed to achieve the desired peaks is akin to that of a javelin thrower.

Emmanuelle deftly used the scale and thermometer with the precision of a chemist. In her lovely French accent, she gave instructions using grams and Celsius. As I folded the dry ingredients followed by the rose extract into the meringue, I struggled to remember the conversion formulas for ounces and Fahrenheit. Noticing my furrowed brow, one of my fellow classmates helped me with the math. 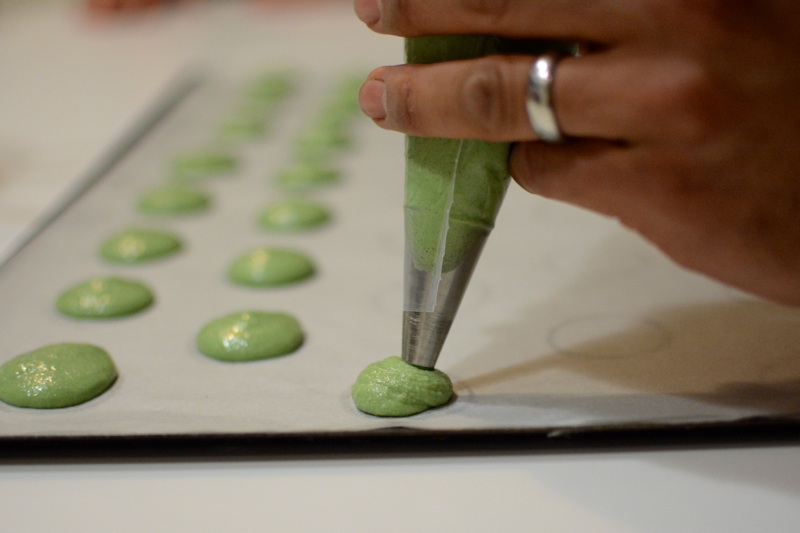 Into the pastry bags the meringue went and out came the baking sheets. A wax paper template was placed on the pan, and Emmanuelle effortlessly squeezed the pastry bag, filling the little circles with the colorful mixture as she answered the class’ questions. “Not too thick and not too thin,” she instructed as the bag was handed over to me. Yeah, that was helpful advice. After about ten attempts, my effort was at best acceptable, though my hand was on the verge of developing carpel tunnel syndrome. 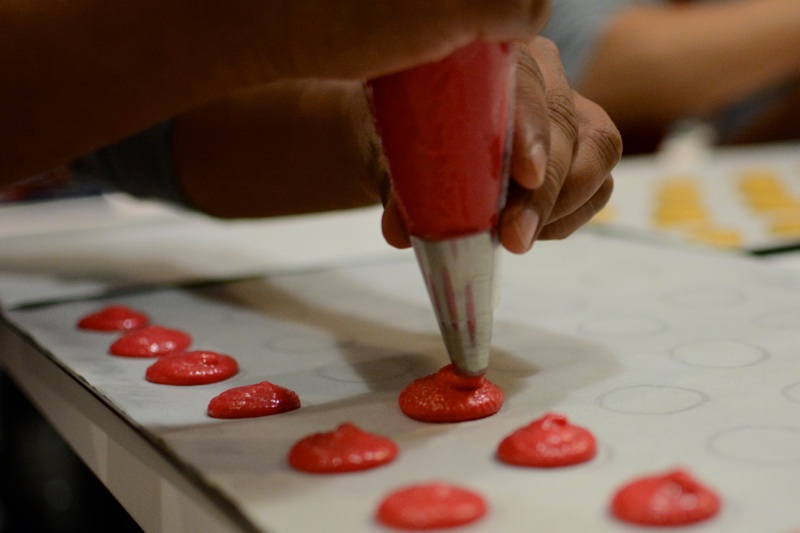 Once the pans were filled, they went into the pre-heated oven. Now, when I’m baking my very special Betty Crocker Super Moist Carrot Cake, I just turn on the timer and plop down on the couch until I hear the buzzer. But macarons aren’t boxed cake mix from America. They’re French, thus much more complicated. 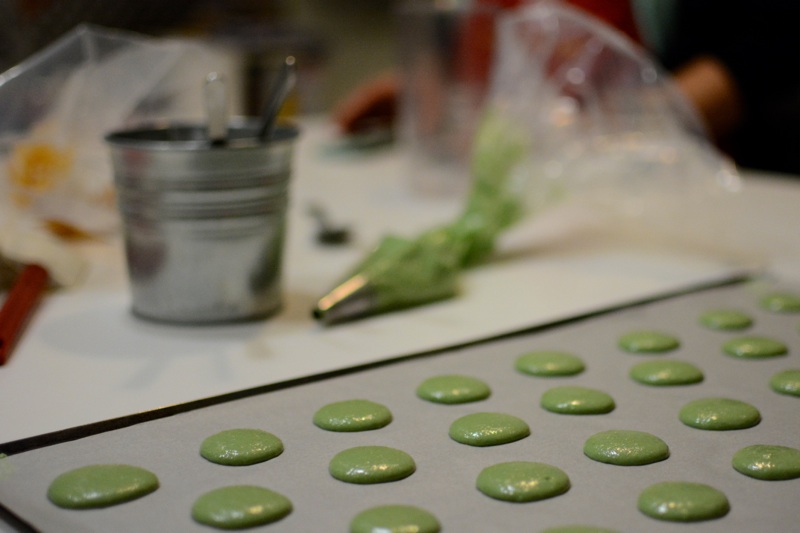 “Leave the door slightly open in order to release the humidity from the oven during the cooking time. And try not to bake the shells on rainy or humid days as this causes cracking.”

I’ve lived in Houston for over a decade, and I’ve yet to experience a day that is NOT humid. If I still had any illusions of creating my Houston macaron empire they were completely squashed in that moment. 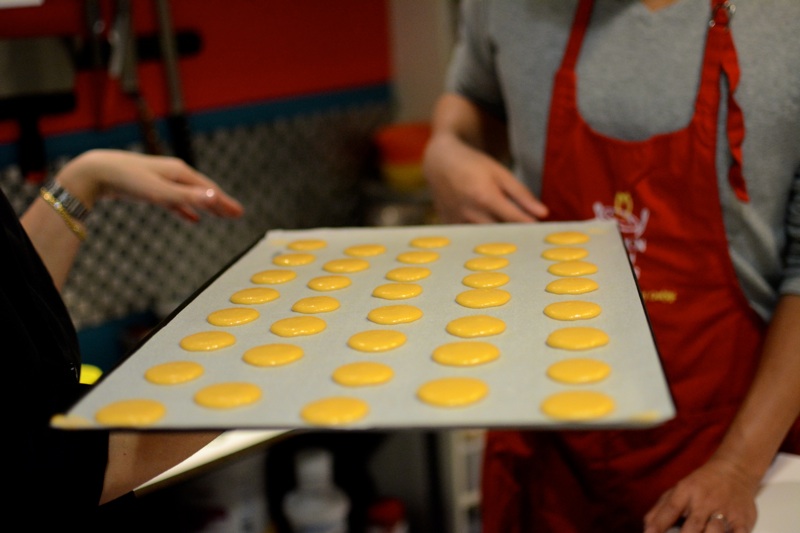 While the shells cooled, the filling made at the start of the class was put into pastry bags. As difficult as putting together a thousand-piece jigsaw puzzle, we attempted to pair shells of equal size. This was a chore since none of our original piping efforts were consistent. After a light dusting of glimmering gold and pink powder, it was time for the pièce de résistance—the filling. 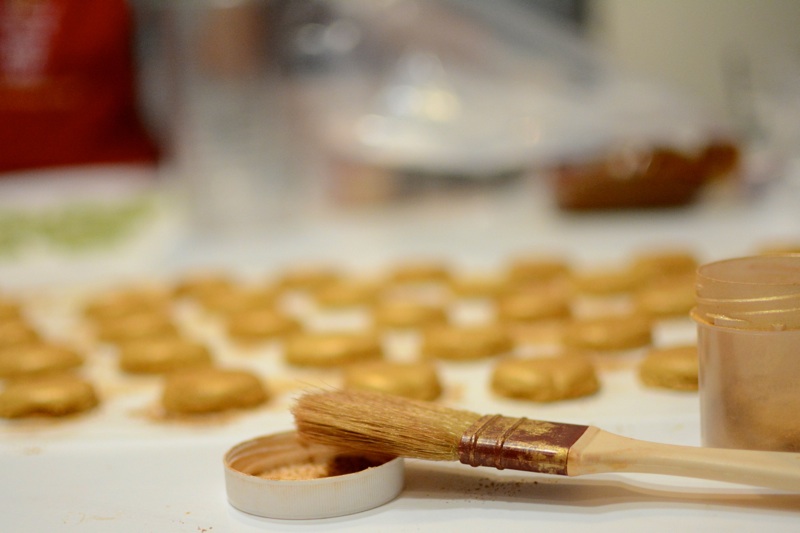 “Not too thick and not too thin.”

Again with the sage advice. Too thick yields spill over, while too thin doesn’t give filling in each bite. I cracked my knuckles and took the pastry bag filled with the white chocolate rose ganache. I covered every other shell with the hot pink mixture until my hand cried “uncle!” Eventually all three flavors of the macarons were filled and assembled. Voilà. 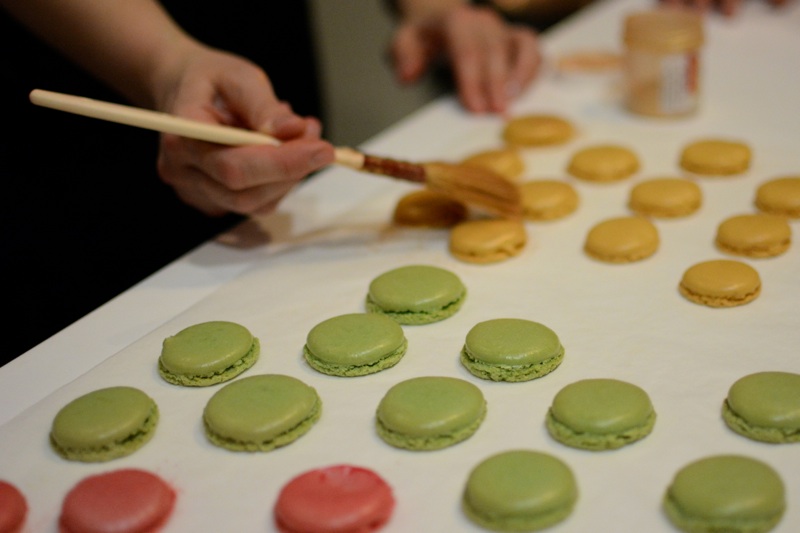 Perhaps if people didn’t look too closely {or were slightly inebriated}, these macarons could pass as professionally made. Ignoring the cracks, overflowing filling, and inconsistent size, I considered this first attempt at making macarons a success. The true test was the taste, however, so I took a bite of each of the three flavors. They were good. In fact, they were really good. Salted caramel was my favorite, followed by white chocolate pistachio and white chocolate rose ganache. 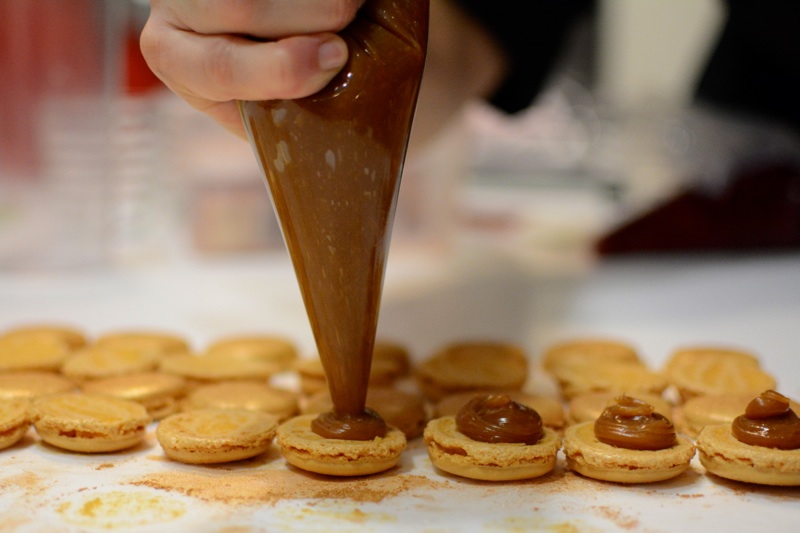 My take away from the class, besides a giant box of macarons, is that Ladurée is justified in charging their steep prices. Making macarons is an art form and a labor of love. I’m so happy that Kensington Tours gave me the opportunity to witness first-hand the process of creating this French classic. However, I won’t be whipping up a batch of these beauties at home. Instead, I’ll stand in line at Ladurée on the Champs-Elysées in Paris and gladly fork over my euros, because I know exactly the effort and skill needed to make these famous French delights. 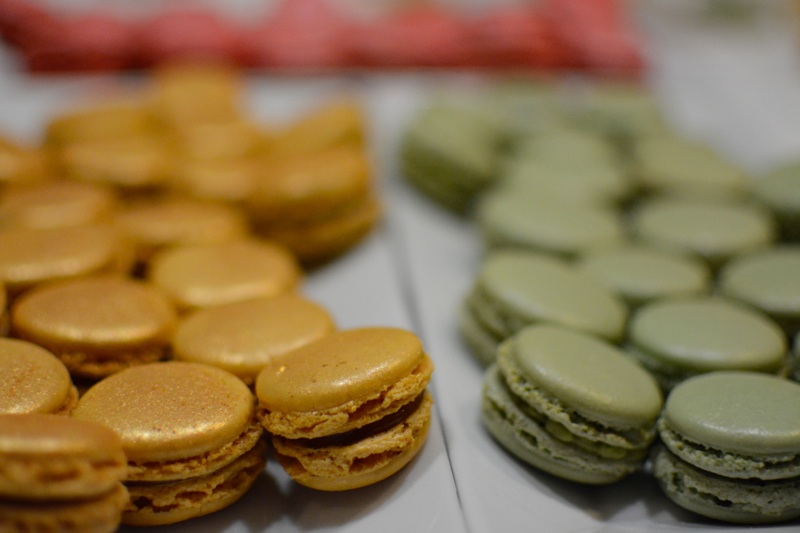 If you want to give macaron making a shot, let Kensington Tours organize a class with pastry chef Emmanuelle at Cookin’ with Class for the next time you’re in Paris. 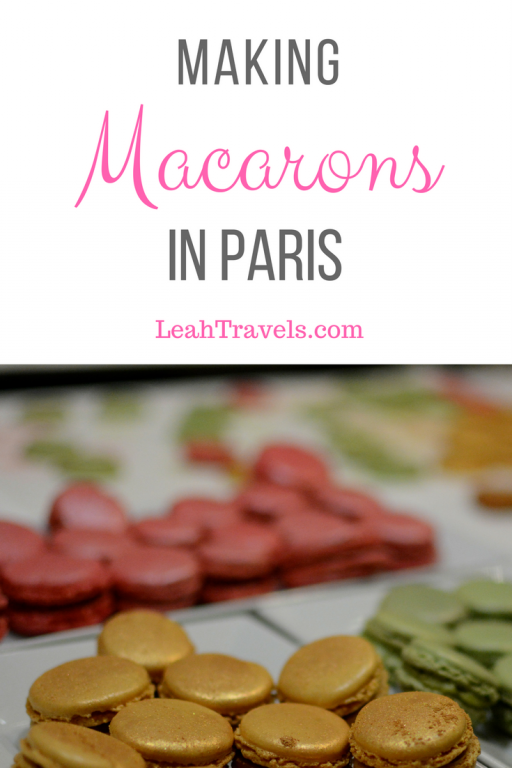 I was a guest of Kensington Tours. In no way was I swayed to write a positive review based on the patience of my instructor or the massive box of macarons I was given. As always, opinions are mine.

France, Italy, and an Attitude Adjustment