Strangely enough, when I stepped off my Vueling flight from Barcelona into Paris’ Orly Airport, a sense of comfort and calmness enveloped me, which took me by surprise. Despite this only being my second time in Paris, I felt like I was home.

Armed with the address to my Hosted Villas apartment, I eagerly hopped in a taxi, happy to be rid of my heavy luggage if only for a bit. It was Sunday morning and in terms of Parisian traffic, there was hardly a car on the road. The driver made quick work of the short, 20-minute drive, weaving through neighborhoods, some of which were familiar to me. Looking out the cab window, I became excited when I saw a monument, museum, or café that I recognized. Despite the overcast skies and chill in the air, Parisians were taking to the streets of the 7th arrondissement. Restaurants were overflowing for brunch and the stores along Saint Germain that happened to be open were busy. The sight of the hubbub only increased the feeling I had when landing at the airport.

With a turn down a narrow side street, the taxi stopped and the driver pointed at a pair of tall, beautiful doors. They were painted a charcoal grey and ornately carved. I’ve had a fascination with beautiful doors throughout my European travels and these did not disappoint. The driver unloaded my bags onto the sidewalk as I made a call to Patricia, my Local Host. Before I could even take in my surroundings, a warm smile greeted me.

Patricia, a petite and beautiful French woman, showed me how to enter the building. Once through the two locked doors, we reached the winding, wooden staircase. The steps were weathered in that fabulous French way; I’m not sure if it was intentional or just from decades of living. Either way, I adored the character and imagined how many people had climbed these exact same stairs. I labored to get my heavy suitcase up to the second floor, but the strained back was well worth what I found at the top of the landing.

During the previous seven days in Costa Brava, Spain, I stayed in a spectacular sprawling house on the Mediterranean Sea, a regal 11th century castle, and a dream-like 18th century farmhouse. I’d been spoiled for the best, and by walking into this apartment that trend continued. I couldn’t believe my eyes. The apartment dubbed ‘Quartier Delacroix’ couldn’t be real, I thought; surely it must be a movie set. When I think of a quintessentially Parisian apartment this is what I envision. I was smitten and hadn’t taken more than two steps inside the doorway.

To my right was a well-equipped and compact kitchen. For two nights, it had everything and more that I could want, including a refrigerator that Patricia kindly stocked with all sorts of goodies. She’d also filled a glass bowl full of fruit for me to snack on throughout my stay. The inclusion of an Nespresso maker and a washer and dryer made me a very happy girl. What else did I need?

To my left was was a dining area with a glass-top table and four beautifully upholstered chairs surrounding it. The back wall had built-in shelves filled with China and crystal, and on the table were pretty pink peonies that Patricia carefully arranged in a vase. She’d also been kind enough to pick up a variety of food from stores throughout the neighborhood including sushi, macaroons, a fresh baguette, and a bottle of white wine. The thoughtfulness didn’t stop there, Patricia also had a Paris guide for my reference, as well as a hand-written list of suggestions for my stay. She was like having a personal concierge at the finest French hotel.

As I walked into the living area, it wasn’t the beautifully carved fireplace mantle or the massive gilt mirror hanging over it that I noticed. The armoire filled with art books and lovely side tables didn’t catch my eye. The plush, white couch didn’t get a second glance, nor did the inviting corner chair perfect for reading. I didn’t even bat an eye at the touches of antique nick-knacks and ornate lamps thoughtfully placed throughout.

Instead, my full attention was drawn to the massive double windows framed by golden silk drapes tied back with beautiful cords. More specifically, it was the unbelievable view on the other side of the glass.  I opened the windows to get a better look. Across the narrow street was a building with a carved-stone edifice. It was massive and so close I could make out every detail. Giant columns were flanked by angels, scenes of cherubs were carved into the walls, and a regal-looking woman was cloaked in a flowing robe. Fontaine des Quatre-Saisons was my view and I would drink it up for the next 48 hours. 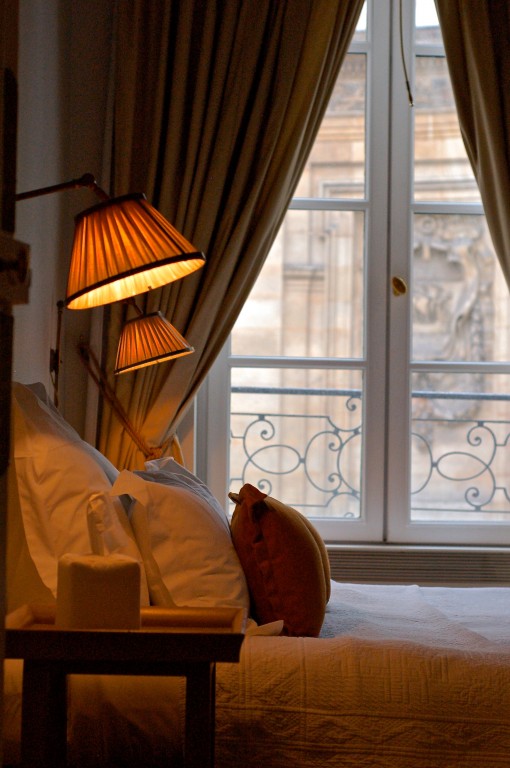 From the open window, Patricia pointed out all of my neighborhood’s features. After all, if I was going to live as a local, I wanted to do it full tilt. Musée Maillol was directly across the street. Interesting. At the end of my block was the typically French Café Le Flores. Important. Just diagonally from my apartment was Dalloyau, a fabulously French pâtisserie. Necessary. Just below my window was a wine shop. Vital. There also was a market at the end of the block as well as the Rue du Bac metro station just around the corner. I do believe I could have easily survived a good week without even leaving the block.

My attention was brought back inside. A elegant palate of white, ivory, and gold fabrics, along with the nearly 10-foot tall ceilings and huge windows made this apartment feel even larger. I surveyed the living area again to get a better look. Patricia pointed out the satellite TV strategically hidden under a tablecloth. I knew I wouldn’t even turn it on; the view outside my window was entertainment enough. Then it occurred to me that I hadn’t even seen the bed or bath.

From the living room I entered the bedroom. The crisp, white linens and over-stuffed pillows immediately drew me in. I’d been going non-stop for over a week and the bed was cloud-like heaven. It was all I could do not to dive head first onto it. Small bedside tables and reading lamps flanked the king-size bed. The same wonderful windows with that fabulous view were also present; there was really no need for any other decor in the room.

At the foot of the bed was an elegant marble fireplace with a large mirror hanging above. Built-in closets on either side of the fireplace helped maximize space. The attention to detail continued up to the soaring ceilings where on top of the closets were more Parisian antiques. This touch was not lost on me; it’s exactly what I would have done if this was my apartment. A side table with a golden mirror above it reflected an angel from the building across the street. 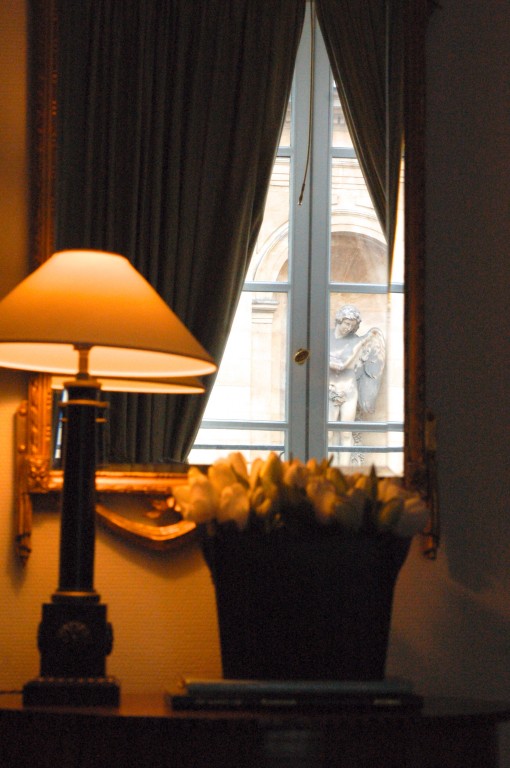 I felt a bit of trepidation before looking into the bathroom. After all, I didn’t want to ruin my love affair with this place. Throughout my European travels, I’ve stayed in many apartments. One thing they all had in common, no matter the city, were their tiny showers. When I laid eyes on this bathroom I breathed a sigh of relief.

Not only did I adore the classic black and white marble, but I was thrilled to see a full-size tub with an oversize shower head. There would be no yoga positions needed to properly bathe here. Toiletries, fluffy white towels, cotton balls, and hand-made French soaps were provided. A towel warmer would be a welcomed treat given the unseasonably cold Parisian weather. I couldn’t decide if I was at the George V or in my very own house.

Patricia and I enjoyed a glass of wine together. She explained that being in the 7th arrondissement, I was in a prime location. I was only a five-minute walk to St. Germain des Prés and le bon Marché. Patricia suggested I visit Musée d`Orsay, just a 10-minute walk with the Louvre being just across the river. On my previous trip to Paris, I’d skipped the Louvre in order to dine with Lionel Richie. With the famed museum at my fingertips, surely I could pay it a visit this time.

Before leaving, Patricia left her phone number and email address. She instructed me to contact her with any questions. She’d even arranged a taxi for my departure, something I wasn’t ready to even consider. I had absolutely nothing to be concerned with; Patricia had thought of everything. All I had to do was decide how I wanted to spend my 48 hours in Paris. That was easier said than done.

Patricia and I said our goodbyes and I locked the door behind her. I let out a deep sigh. After ten days of moving from place to place in Spain I was now home. I walked around my Parisian palace and took in every detail:  Books that contained the works of famous French artists, the luxe silk tassels that held back the drapes, the antique clock that sat on the mantel, and the pretty paintings hung throughout. I had excellent taste.

With the only noise coming from the street below, I thought this is what it’s like to live in Paris. And with the city at my fingertips, I did what I imagined any other Parisian would do on an early Sunday afternoon. I took a nap. Musée d`Orsay would be there when I woke up.

I was an invited guest of Hosted Villas, however the opinions expressed here are truly my own. In no way was I swayed by the fabulous French cheese left in my refrigerator, the presence of angels in my bedroom, or the stellar location of this Parisian apartment.

10 of the Best Things to do in the Loire Valley, France