Paris is most commonly known as the City of Light and the City of Love, but I’d like to add another nickname: the City of Lust. Defined as a strong desire, there’s a lot of lusting going on in Paris—lust for art, culture, fashion, wine, cheese, pastries, and, of course, the carnal kind of lust. How else can you explain Christian Louboutin, Chantal Thomass, and the Crazy Horse? From the beautiful bordellos of La Belle Époque to the modern-day libertine clubs {I’ll let you Google that}, Paris is sultry. There are countless romantic hotels in Paris, ones that will surely woo or renew a love, but what about a place that sets the scene for pure unadulterated lust? I’ve got you covered. Check out these six sexy hotels in Paris. 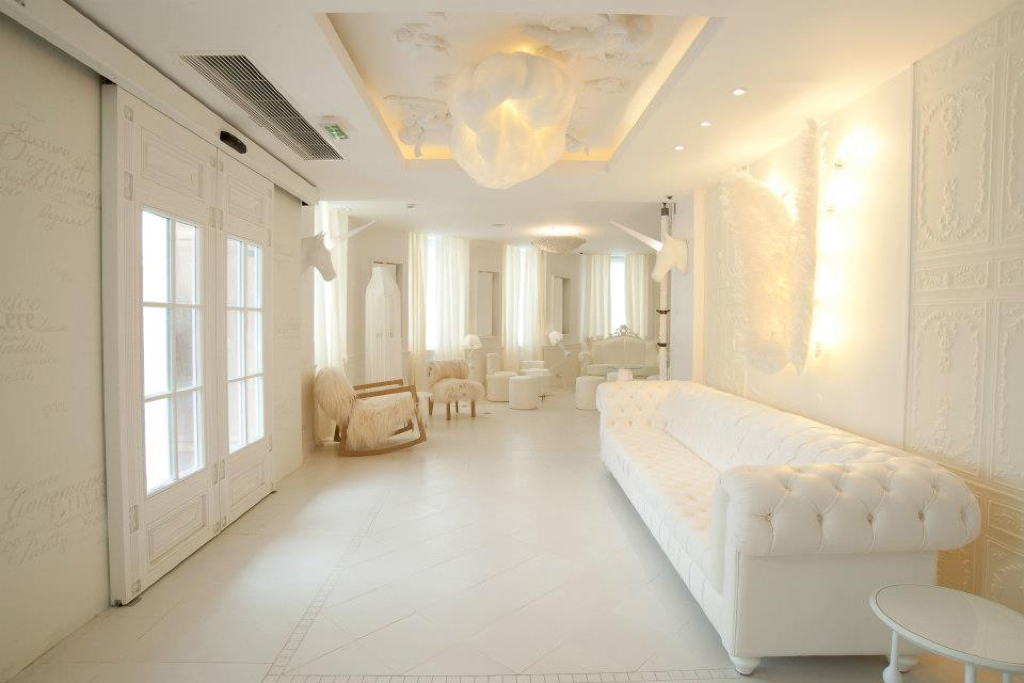 Speaking of Chantal Thomass, the legendary French lingerie designer has given hotel design a try. Located in the unsexy 15th arrondissement, between the Convention metro and Porte de Versailles, is where you’ll find the very sexy Vice Versa. Ms. Thomass has taken the 37 rooms spread out between seven floors and turned them into a din of sin—the seven deadly sins, to be more precise. Gluttony, envy, greed, anger, pride, sloth, and lust are represented in everything from the money on the walls {greed} to guns on the carpet {anger}. 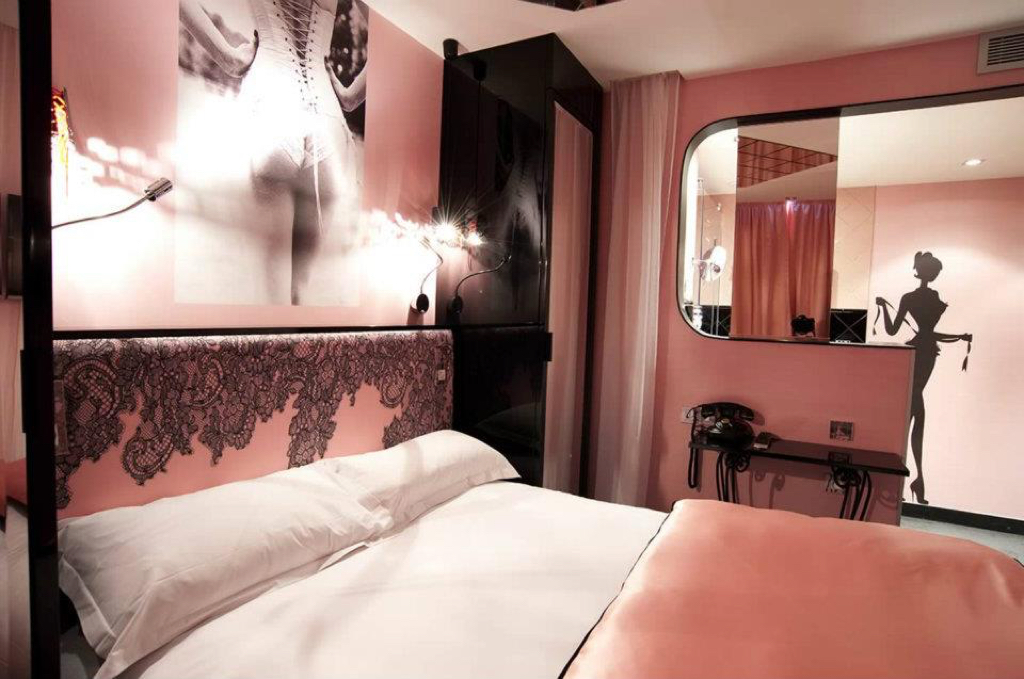 The lobby is bathed in white, with a unicorn and giant angel wings mounted on the wall. Step into the basement, where a red and black palate, skulls and crossbones, and devils welcome you to hell, or rather the hammam. Each floor embodies one of the seven deadly sins, and every room is unique. Pastels, cupcake chairs, and teapot lamps adorn Gluttony’s rooms, while Lust has a pink and black corset theme, with a mirrored ceiling. From the gilt-tiled bathtub of Pride’s deluxe rooms to the stiletto and handbag heaven of the Envy rooms, there’s one to satisfy your every desire in this sexy Parisian hotel. 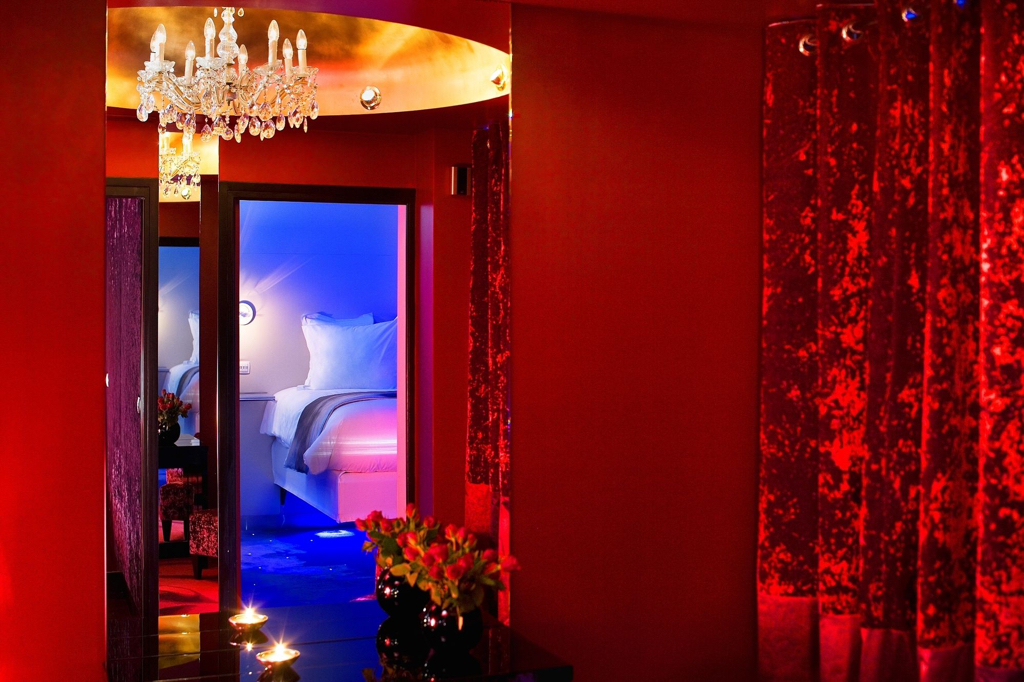 From the seven deadly sins to the five senses, are you beginning to sense a theme? At the Five Hotel, the idea is to appeal to each of a person’s five senses: taste, sight, touch, smell, and hearing. Located in the 5th arrondissement, this boutique hotel is something different in the historic Latin Quarter. Each room has a unique design, but all come complete with starry ceilings, lacquer accents, a mix of textures, and vivid colors. The deluxe rooms feature special touches like a suspended bed or a private outdoor Jacuzzi. The One by the Five suite made a splash around the world with its floating bed under a painted cloud sky. Oh, and what’s a sexy hotel in Paris without a scarlet-soaked bar with a name like Love Capsule? 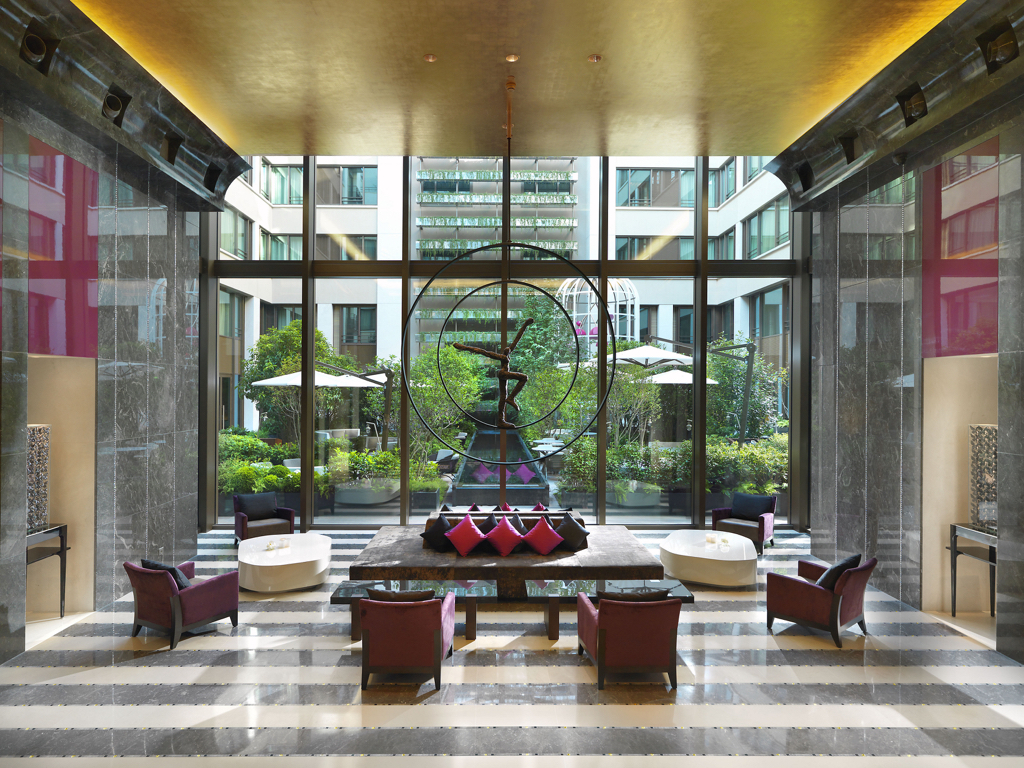 Of all the Palace hotels in Paris, the Mandarin Oriental is the one I’d consider the sexiest {Though, Le Royal Monceau comes in a close second after Philippe Starck put his mark on it}. Located in the swanky 1st arrondissement on Rue Saint Honoré, the Mandarin is tucked between Chloé and Marc Jacobs. The discreet Art Deco entrance reveals a gorgeous inner courtyard, complete with a garden and giant birdcage. Paying homage to its Asian roots, the MO represents with orchids {the sexiest flower}, butterfly accents, and purple, pink, and orange silk everywhere. 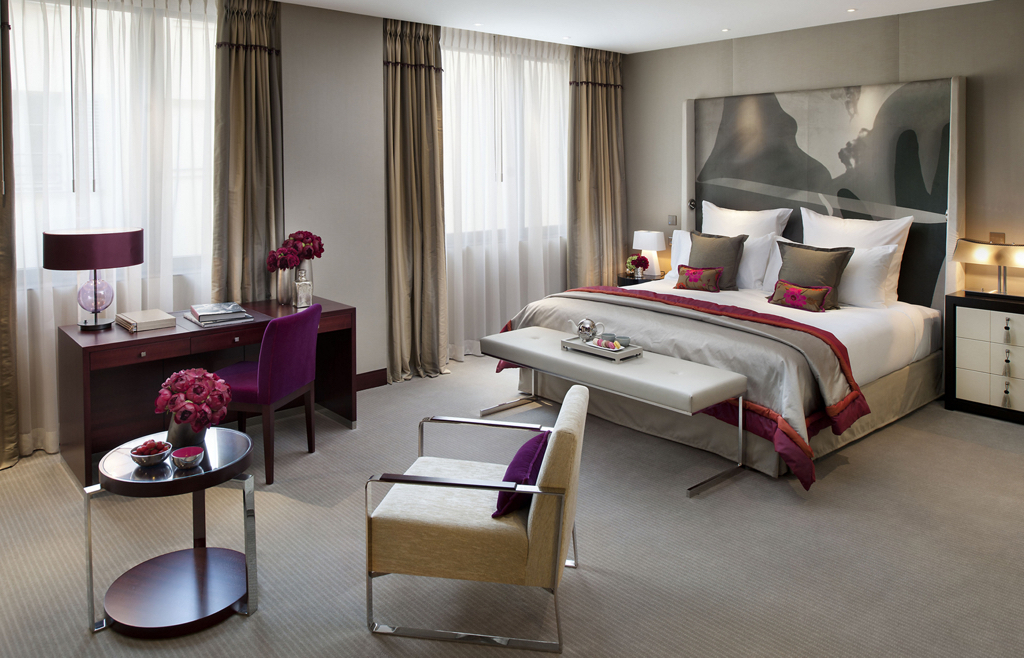 This Parisian hotel’s sexiness is stepped up a few notches in the rooms. Contemporary in design, the furnishings are made of sleek materials such as lacquers, chrome, and rich, dark woods. The yin of the masculine is set off with the yang of the feminine: jewel tone taffeta and silk that adorn the windows and bed. Exclusively created for the Mandarin Oriental, Paris is a series of seductive black and white photographs by Ali Mahdavi, which are featured in the rooms and suites. And don’t get me started on the bathrooms or the spa. There are no locker rooms, only treatment rooms, complete with private facilities and even your own steam shower. The three couples’ treatment rooms also come with vitality pools. Oh so good! 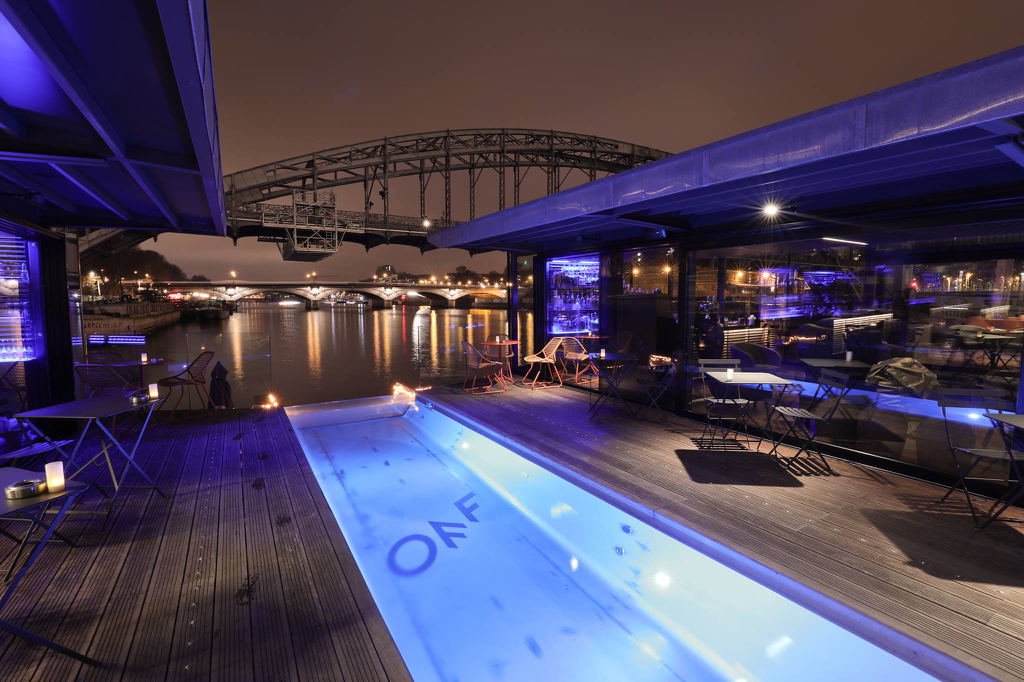 In the up-and-coming 13th arrondissement, near Gare Austerlitz, is Off Paris Seine. Just as the name implies, this is the first hotel in Paris located on the Seine. I don’t mean it’s on the bank of the river; it’s literally sitting in the water. 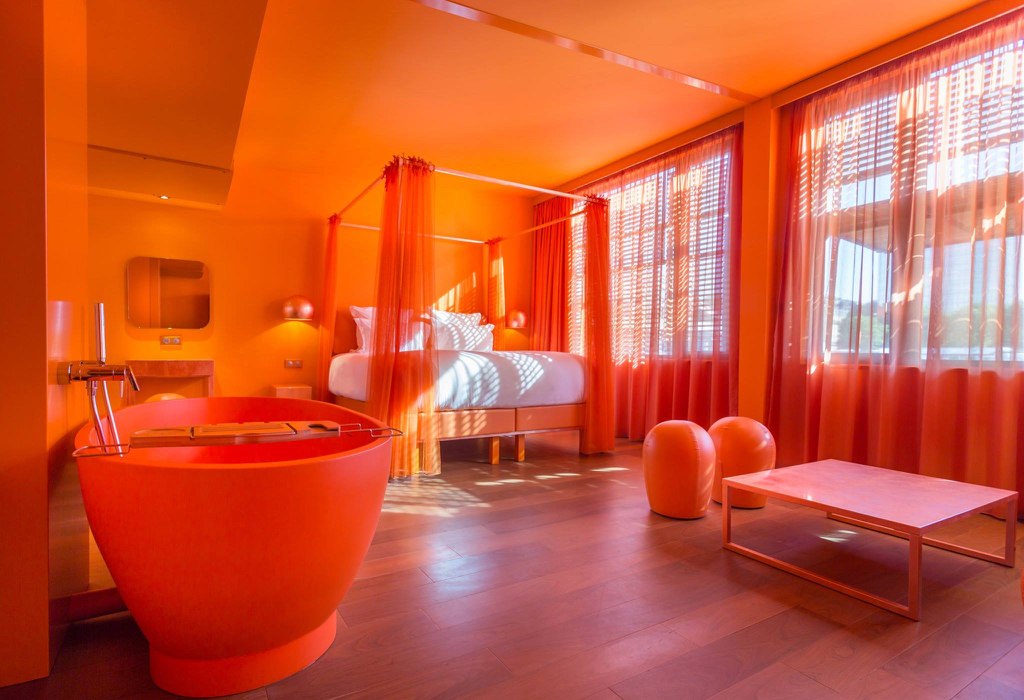 Everything about this hotel is modern. Straight lines using glass, steel, chrome, and wood details dominate the sleek design. Sandwiched between the two public areas is a super sexy lap pool. In the summer, the sliding glass doors open to create a very cool atmosphere for a handcrafted cocktail with your lover. Choose the electric orange Sunset Suite for a fiery night, which is sure to include a soak in the giant bathtub overlooking the Seine. For something a little more serene, yet no less sexy, request the Silver Suite. A collection of mirrors above the bed and a citron-colored bathtub built for two is sure to set the mood. And the views of the Seine won’t hurt either. 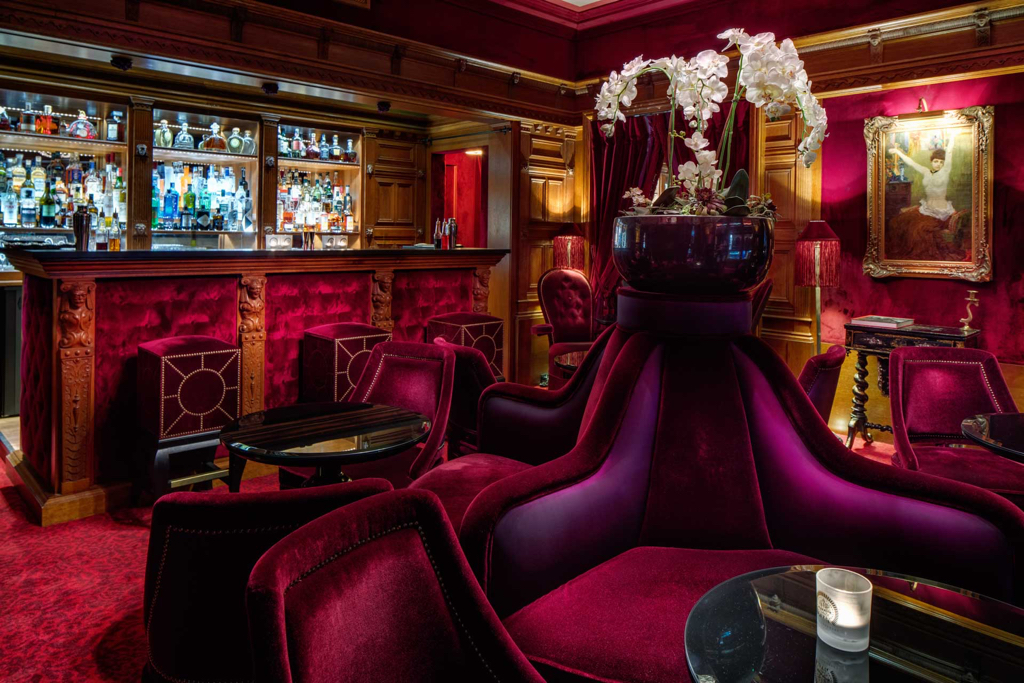 Fringe, red velvet, and bare breasts…and that’s just in the bar of Maison Souquet. OK, so the nudity is actually an antique oil painting hanging in the bar, but I got your attention, no? In the evolving SoPi {South Pigalle} area, just a tassel toss from the famed Moulin Rouge, is Maison Souquet, easily one of the sexiest hotels in Paris. Once a brothel, then, funny enough, a school for girls, this boutique hotel is one of my favorites in the city. It’s gotten tons of well-deserved press from around the world, and continues to impress. 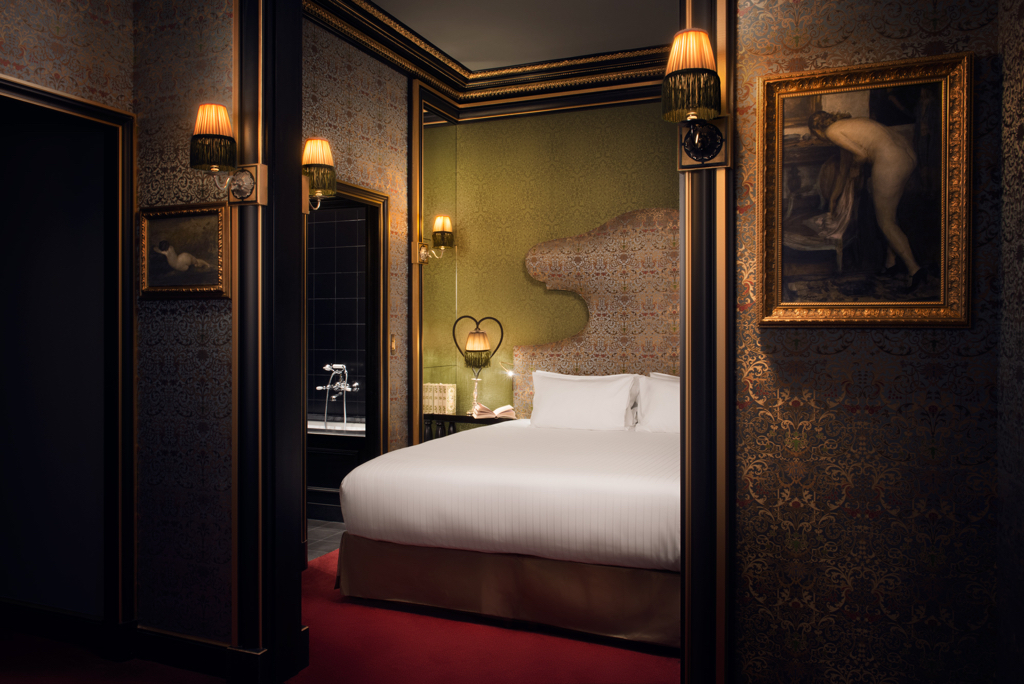 The owners decided to embody the building’s past as a bordello and brought in famous French designer, Jacques Garcia, to create an 18th century pleasure house for the modern guest. The hotel has coined itself as a “temple to hedonism” and I couldn’t agree more. The 20 rooms and suites are uniquely designed, but all embody the spirit of the hotel. Handpicked antiques from the era are mixed with lush velvet, silk, and taffeta fabrics and wall coverings typical of Garcia. Reserve the pool in the basement; as a guest, you’re entitled to one hour of complete privacy under the star-painted ceiling and in the hammam. Now, that’s what I call subterranean sexy. 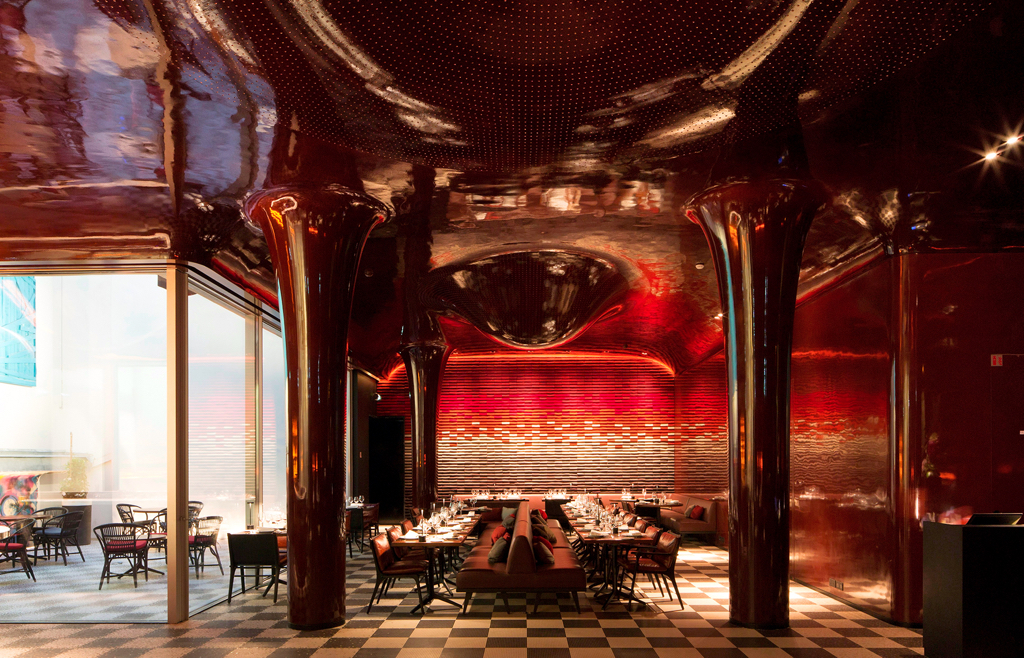 In the 3rd arrondissement of the Maris is Les Bains. Built in 1885 as a public bath house called Les Bains Douches, the building welcomed Parisians, including Marcel Proust, through its doors, until the 1970s, when most flats had their own bathrooms. Soon after closing, a chance meeting by the owner with an antiques dealer led to the creation of a nightclub, which was designed by a then unknown Philippe Starck. Opened in 1978, the club was the Studio 54 of Paris, with a mix of gay and straight patrons. The party stopped in 2010, when the owner decided to turn the building into a hotel—Les Bains. 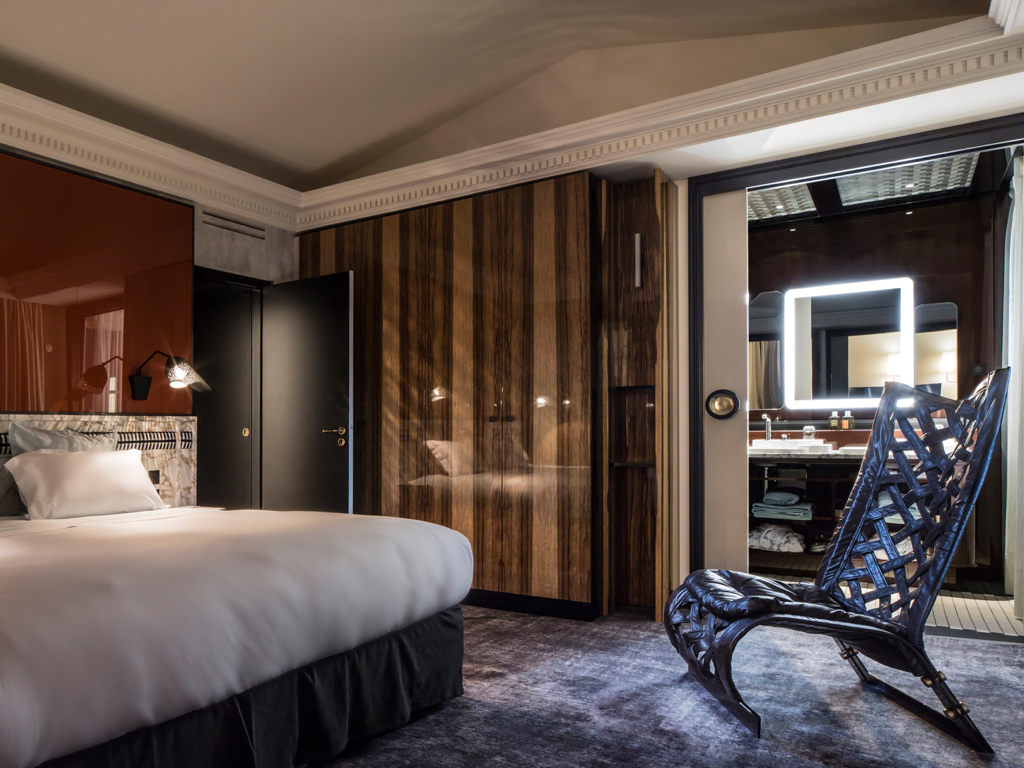 By sheer coincidence, I ran into Tristan Auer {the hotel’s designer}, the day before writing this article. I took that opportunity to ask what he thinks makes Les Bains sexy. In his design, Tristan wanted to capture the feeling from its nightclub days, but in a new and modern version. In the bedrooms, everything is soft and welcoming with a palate of white, grey, and silver, with touches of orange and velvet. He created two parts of the bathroom. The dry area has high-gloss exotic wood, which is very masculine. The wet part is a room where you can spray water everywhere, and the shower has a seat, which doubles as a hammam. 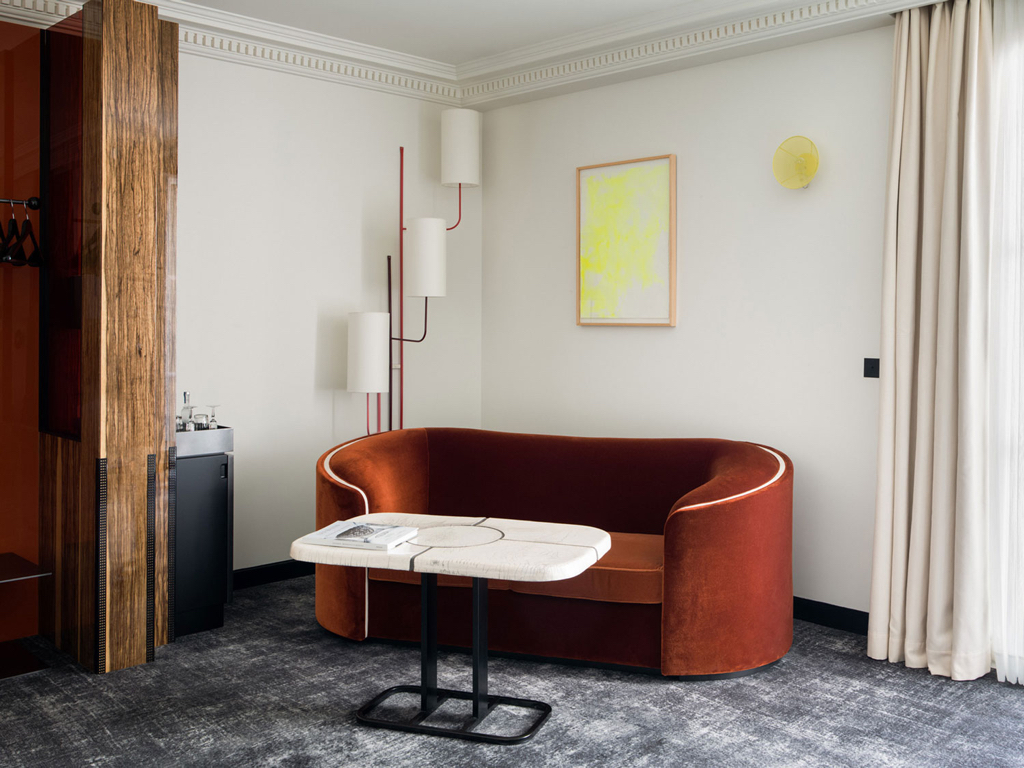 One of the standout features of the rooms is a velvet sofa. It was the famous orange couch of Andy Warhol that inspired Les Bains’ version. Said Tristan, “Warhol’s done everything in it: make love, did drugs, made movies. This is the center of each room, where you can do as you please. It’s a room within a room and a very sexy sofa.”

A place where you can do as you please? Now, that’s always sexy.

Yes, Paris is arguably the most romantic city in the world, and there are plenty of hotels that embody that reputation. But Paris is also a place for pleasure, and any good Parisian will attest to that fact.  From three-star to Palace hotels, these spots are among the sexiest hotels in Paris. Go on. Pick your poison. 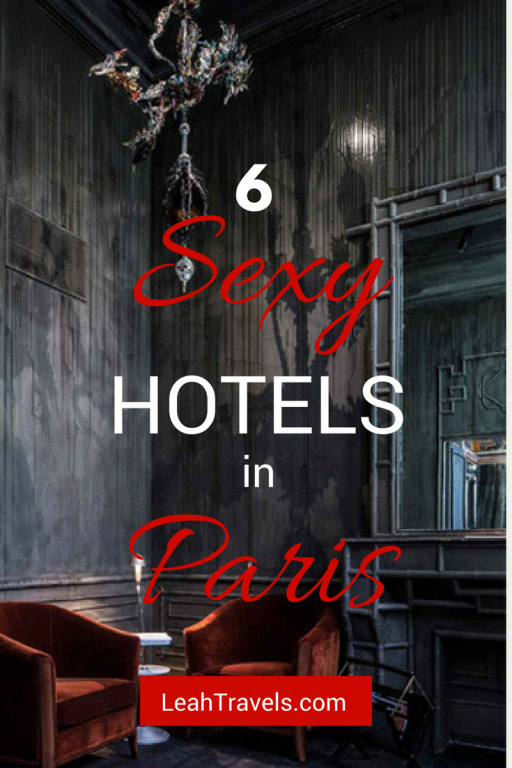 All photos are property of the respective hotels.

Reasons to Visit the Lorraine Region in France