Oh, Provence. That dreamy place in France not called Paris. Provence is probably the place you envision when imagining the French countryside. Surely you know this picturesque region: lavender fields, the French Riviera, olive trees, Cézanne, and of course, wine–specifically rosé wine. 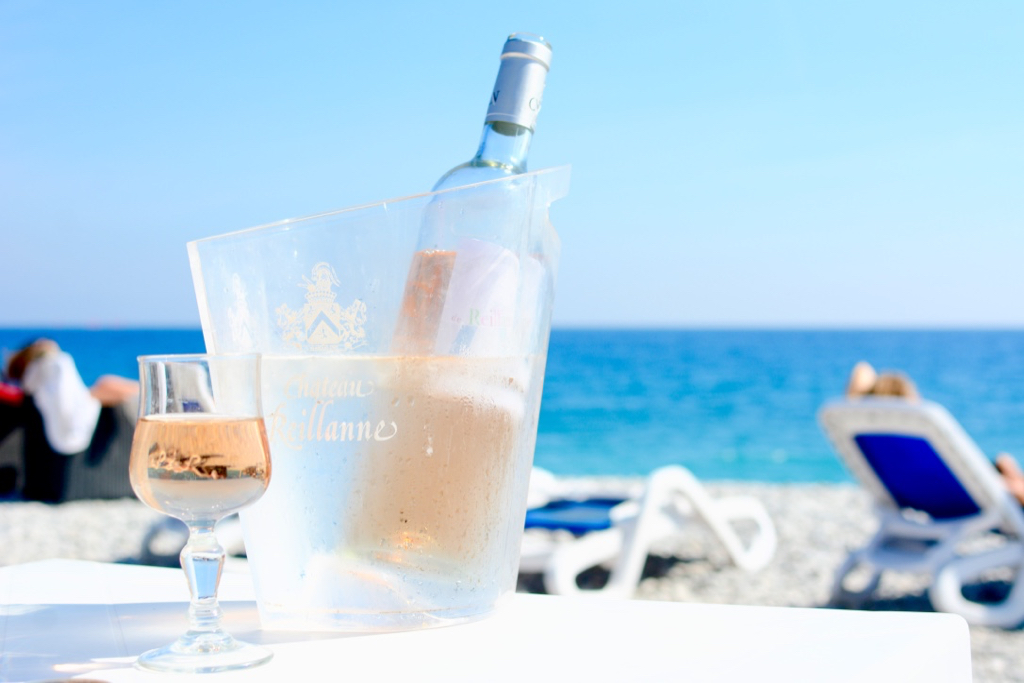 Things to Know about Rosé Wine in Provence

I’ve watched the reputation of rosé among the French evolve during my years living in Paris. Many French will turn up their noses at rosé, but once the temperatures rise, that all changes. From the beginning of May through the end of September, the supermarket shelves are stocked with countless pink bottles with nary a red to be found. On terraces, at picnics, and on péniches along the Seine, rosé wine is the only liquid that crosses the lips of Parisians.

So, what exactly is this pretty pink nectar of the gods? Like all things French, the answer to this simple question is not so easily explained. Thus, here are five things to know about rosé wine in Provence.

Geography & History of Wine in Provence

Located in southeastern France, with its boundaries being roughly the Rhône River to the west, Italy to the east, and the Mediterranean Sea to the south, Provence has a varied, yet primarily limestone landscape, with a climate that is sunny, hot, and dry, characteristic of the Mediterranean. Their famous Mistral winds ferociously sweep across the region from the Alps, which is welcomed during the summer months. It also protects the vineyards from diseases caused from humidity.

Marseille is much maligned by many French, but the capital of Provence is the birthplace of France’s wine industry. Phocaeans brought the grapevine to the area around 600 BC. The ingenious Romans came some four centuries later with their roads, arches, and numerals, spreading the wine growing tradition to other parts of France, which at the time was known as Gaul. When the Roman Empire died, so did the grapevines.

Thanks to the monks, the vines were resurrected during the Middle Ages. Later, the region’s nobility stepped in during the start of the 14th century to further increase production of vin. Overproduction {who can fault them?} during the early 20th century led to winegrowers creating a cooperative, which eventually led to Provence rosé wine being certified with an Appellation d’Origine Protégée distinction. Now, there are a whole lot of rules and regulations that go along with making rosé wine in Provence. Yay France!

Speaking of making rosé wine in Provence…it’s not just mixing white and red wines together. No, this is France. You should be aware by now that things are much more complicated than that.

Rosé wines are made from red grapes such as cinsault, grenache, syrah, cabernet-sauvignon, carignan, tibouren, and mourvédre. These grapes have dark red skins and white flesh that are crushed, which releases a light juice that is tinted by the ruby skins. The juice can remain with the skins anywhere from 2-20 hours before the fermentation process begins. Most rosé wines are kept in stainless steel vats, rather than barrels.

Finally, the winemaker takes at least two of the rosé batches and blends them together to make the wine. It’s important to note that the batches are made from single grape varieties. For instance, a varying amount of syrah can be combined with a tibouren to create the rosé. When I visited Provence in November, several of the winemakers I met were in the process of blending, so I got a sneak-peek of what we’ll be drinking this summer.

One of the great things about rosé wine, besides the deliciousness, is that it’s affordable. A good bottle of rosé in France should cost no more than 15 euros. This means that there’s no reason not to taste a whole bunch of them. Whether for an aperitif; with spicy food like Mexican, Thai, or Indian; standard American fare such as burgers and BBQ; or any sort of seafood, rosé wine pairs nicely.

Fresh, fruity, and floral, this wine is somewhere between a full-bodied red and a crisp white. Meant to be served between 46-53 degrees Fahrenheit {8-12 Celsius}, rosé wines are categorized in six colors: Gooseberry, Peach, Grapefruit, Cantaloupe, Mango, and Mandarin. If you’re unsure, look for a gold, silver, or bronze “Vins de Provence le Concours” sticker on the bottle. Each year, blind tastings result in approximately 100 medals awarded to the wines of Provence.

Provençal Rosé by the Numbers

One of the things I learned during my vin-filled week in Provence is that the 600+ winegrowers have had to fight to earn respect for their wine, especially around France. It hasn’t been just talk and marketing, however. The proof is not only in the product, but also the numbers.

In 2013, 30% of the wine consumed in France was rosé. Of the 146 million AOP rosé bottles produced in Provence each year, 84% of those bottles are sold in France, with 40% of that number sold in Provence. And another interesting little nugget I discovered is that rosé now outsells white wine in France. What those numbers say to me are that even the wine snobs of Bordeaux and Burgundy are throwing back plenty of Provence rosé.

A mind-boggling 88% of wine produced in Provence is rosé, with only 8.5% red and 3.5% white. Approximately 96% of all Provencal wines are made in three appellations: Cotes de Provence, Coteaux d’Aix-en-Provence, and Coteaux Varois en Provence. Provence represents 39% of domestic rosé production and 5.6% of the world’s production. And, 16% of Provence’s rosé wine is exported, with the United States of America being the biggest buyer {USA! USA! USA!} followed by the Belgians.

With over 600 winegrowers in Provence, there’s no shortage of vineyards to visit. And in such a huge area, it would be impossible to get to them all. Thankfully, the region created the Provence Wine Route in 2011. Sponsored by the Provence Wine Council {CIVP} and the PACA Regional Chamber of Agriculture, the route has made organizing a wine-fueled road trip to Provence much more manageable.

I don’t believe in overthinking wine. If it tastes good then I’ll drink it. I don’t necessarily want to blabber on over the notes, tannins, and all that other jazz. This is one of the things I loved about my wine trip to Provence. It was a bit sassy compared to other grape-growing regions of France. In this regard, I’d say that wine from Provence is a direct reflection of the people who grow it, and that’s a great compliment. Make your own rules and embrace your differences. In its rosé wines, Provence has done just that

I was a guest of Provence Alpes Côte d’Azur Tourisme {PACA} and Vins de Provence. In no way was my opinion swayed based on the vibrant autumn colors, the endless wine tastings, or the kindness shown by the people of Provence. As always, opinions are mine.