French writer, Yvan Audouard, once quipped, “In Provence, the sun rises twice a day–once in the morning and once after nap time.” Indeed, the pace in Provence is a bit slower than Paris. That’s one of the reasons why this French region is one of the places I love escaping to most. 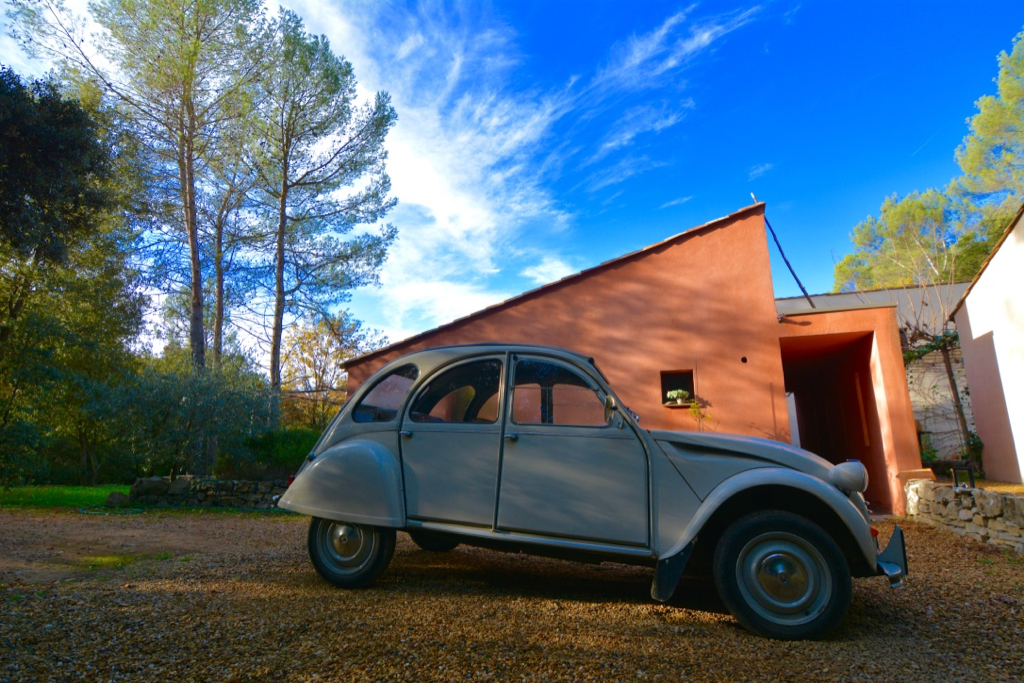 Its diverse landscape is yet another reason I adore Provence. From the rugged Alps to the dreamy Côte d’Azur to the rolling vine-covered hills in Var, Provence is one perfect post card after another. The area has inspired artists like Cézanne, Picasso, Matisse, and Van Gough, and the reason why is perfectly clear: the light. I can’t remember visiting a place that comes close to duplicating the South of France’s brilliant light. Regardless of the season, the Provençal light washes over the earth, adding indescribable life and dimension to everything it illuminates. 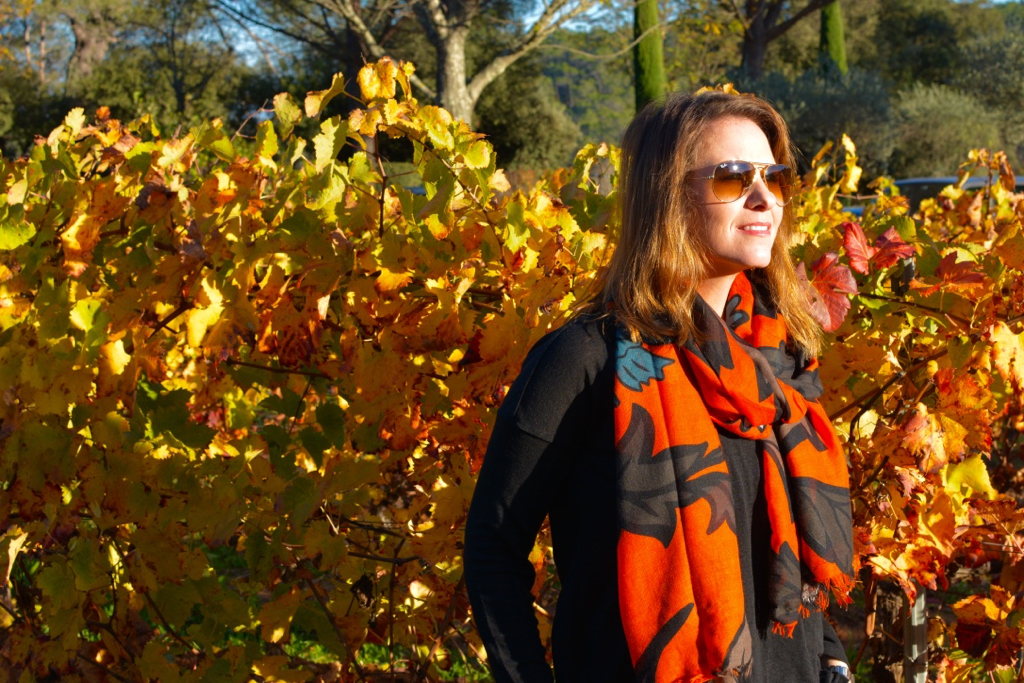 The birthplace of Nostradamus, rosé wine, and bouillabaisse, Provence is a vast region that’s densely packed with history, culture, culinary offerings, and alarmingly beautiful vistas. From Avignon to Nice and many points in between, I’ve compiled my favorite six places to visit in Provence. 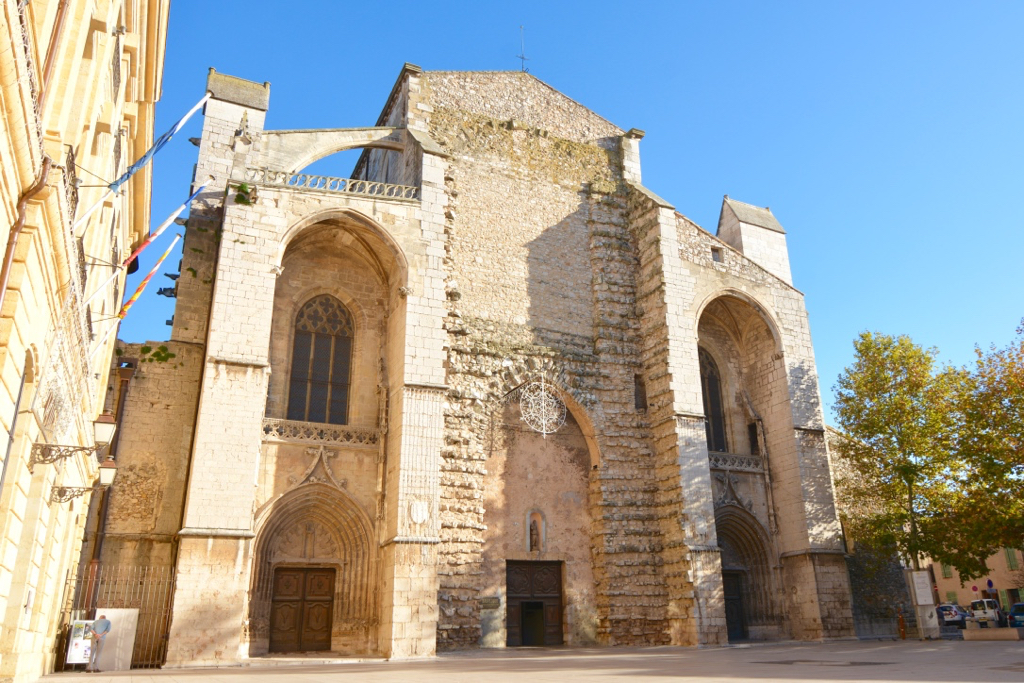 In the Var commune of Saint-Maximin-la-Sainte-Baume is Saint-Mary Magdalene Basilica, which is home to the third most important Christian tomb behind the Church of the Holy Sepulchre in Jerusalem and St. Peter’s in Vatican City. Here, the sarcophagus of Mary Magdalene was discovered and where her skull can be seen. 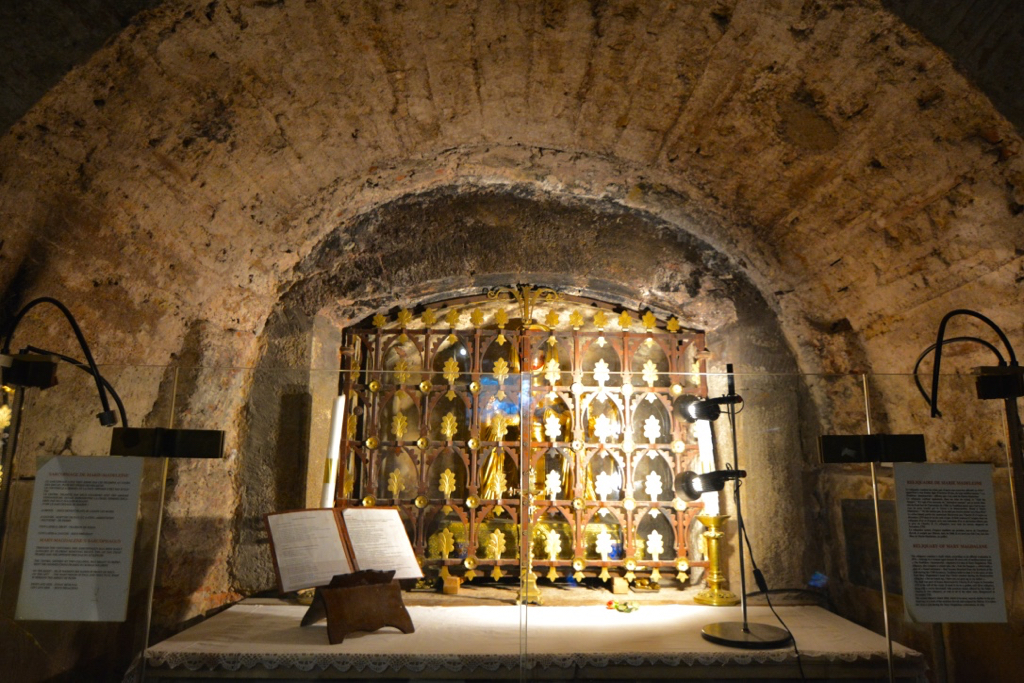 Charles of Sicily, the Count of Provence at the time, founded this Provençal Gothic building in 1295. It was never actually completed according to plan, thus it looks unfinished, especially on the facade. A longtime destination for pilgrims, including Louis IX, Francis I, Charles IX, Catherine de’ Medici, Henry IV, and Louis XIV, the basilica {and nearby Saint-Marie-Madeleine grotto, where Mary Magdalene remained in prayer and solitude for the remaining 33 years of her life} has played a major role in Christianity. 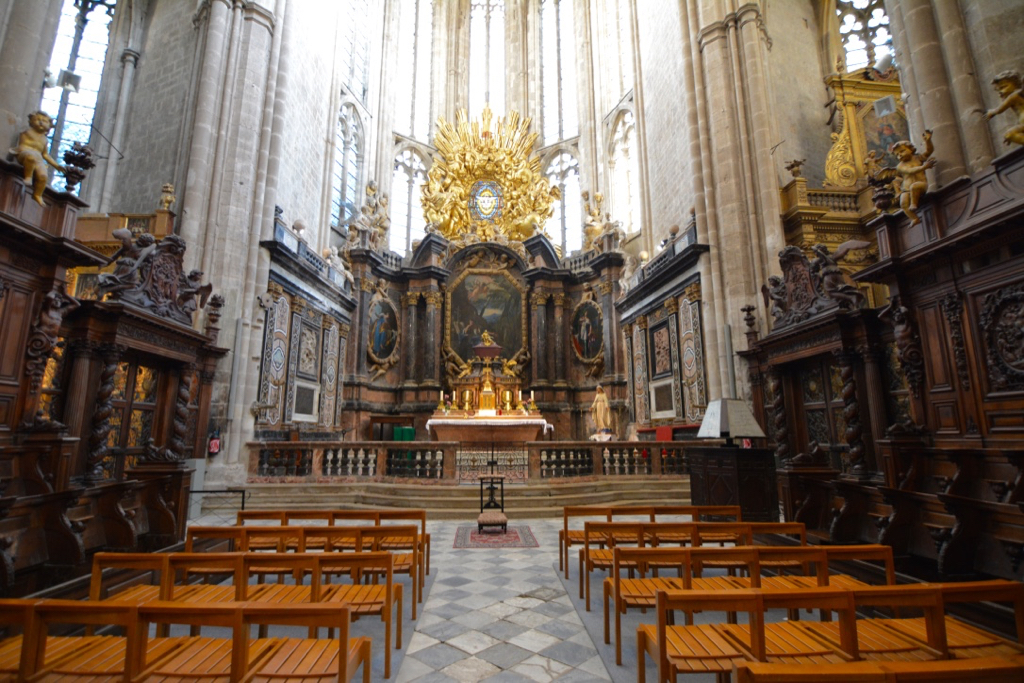 Renowned for its music, the basilica’s organ has over 1,000 pipes. During the French Revolution, revolutionaries intended to break down the organ and use the metal for weapons. However, when they entered the church, La Marseillaise {now the French national anthem} was being played. Thus, the organ was spared and remains intact today. 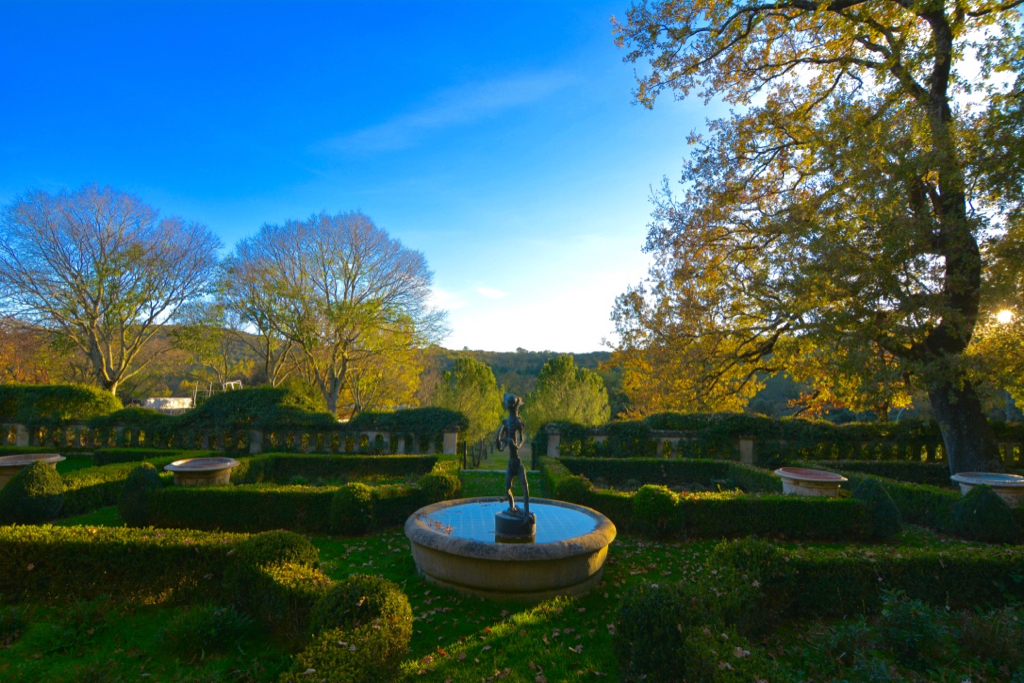 Located in the Var hills, near the village of Flassans-sur-Isole, is Commanderie de Peyrassol. Founded in the 13th century by the Order of the Knights Templar, this legendary vineyard not only is an outstanding place for wine lovers, but also those interested in history and contemporary art. 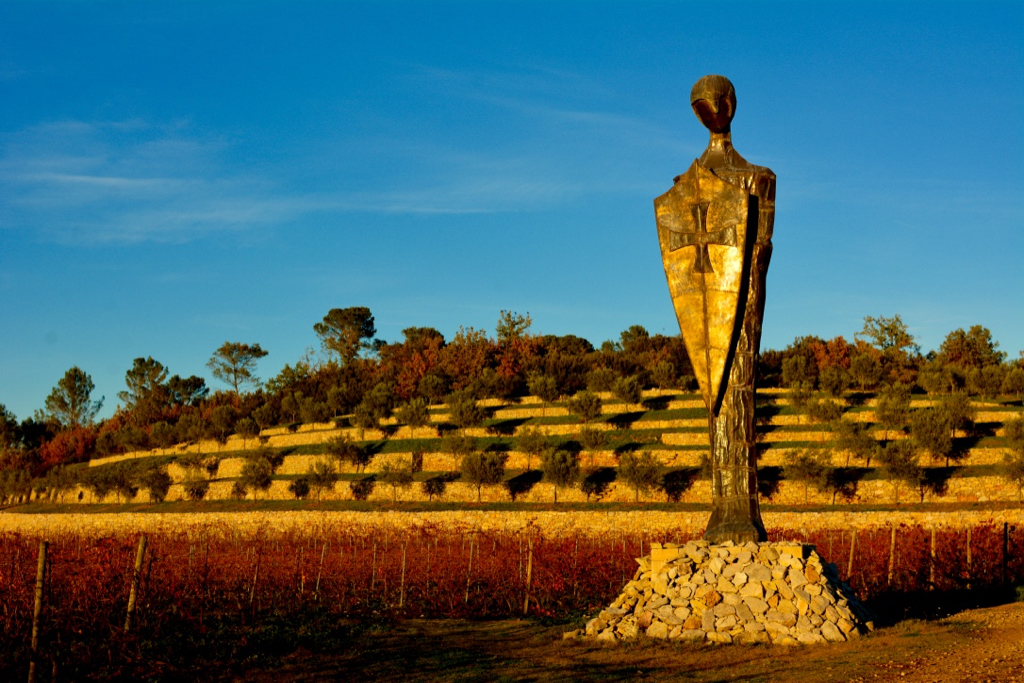 A rabbit sculpture in front of the owners’ chateau is a tribute to the animal that was seen in the vines, which in turn, inspired the addition of art throughout the domaine. Now, there are over 60 sculptures on property, including a large knight that sits among the vines and olive trees, which serves as an ode to the Templars that once lived on this land. 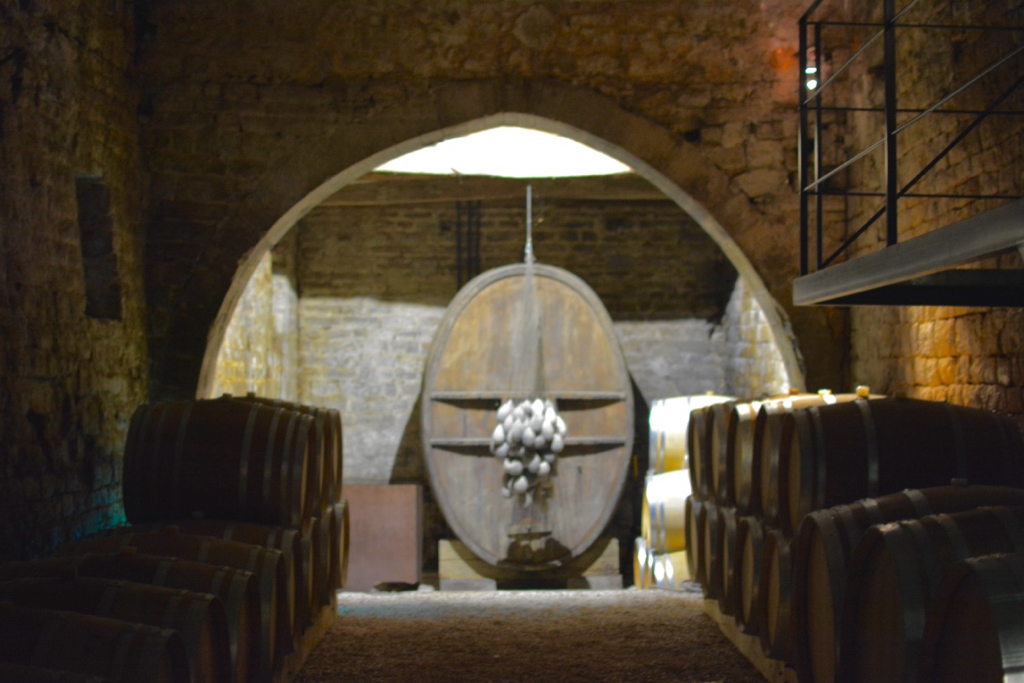 Whether for a wine tasting and tour, lunch at table d’hôte, or staying the night in one of their luxuriously rustic rooms, time spent at Commanderie de Peyrassol is a pleasure. No matter how long you stay, make sure to taste the range of their red, white, and rosé wines and pay a visit to the historical room that was once used by the Knights of Templar, which now is used to age white wine. 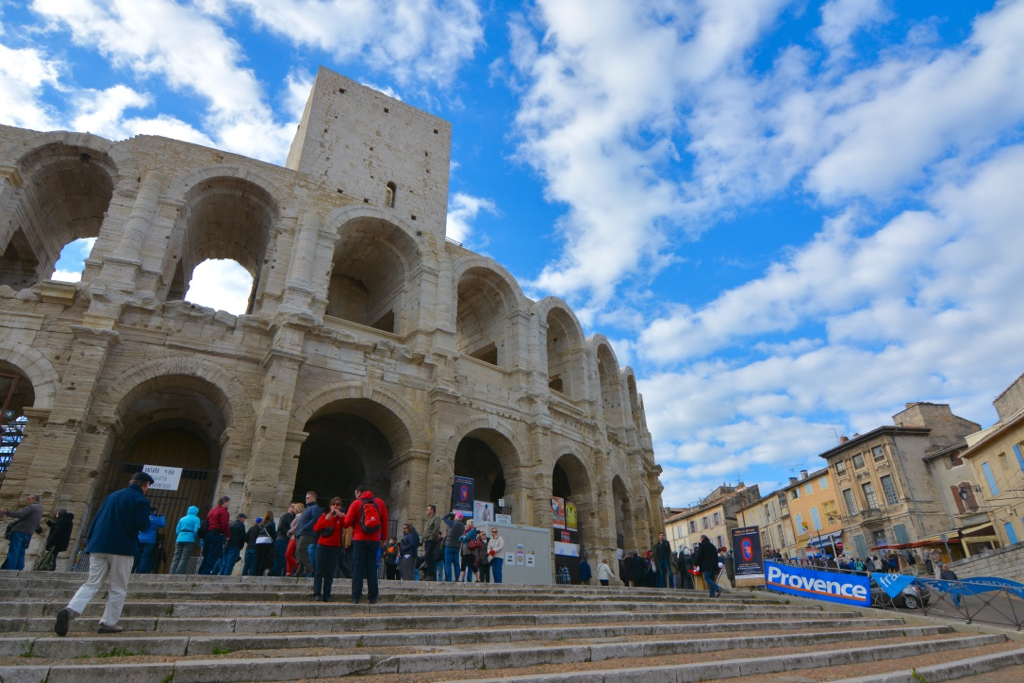 Arles is known as “the little Rome of Gaul” due to its impressive collection of well-preserved Roman ruins. Les Arènes seats 20,000 and is still used for events such as La Feria d’Arles, Abrivados and Camargue races, which center around the city’s bull fighting heritage. The Théâtre Antique, Baths of Constantine, and Cryptopotico of the Forum helped Arles become a UNESCO World Heritage site. 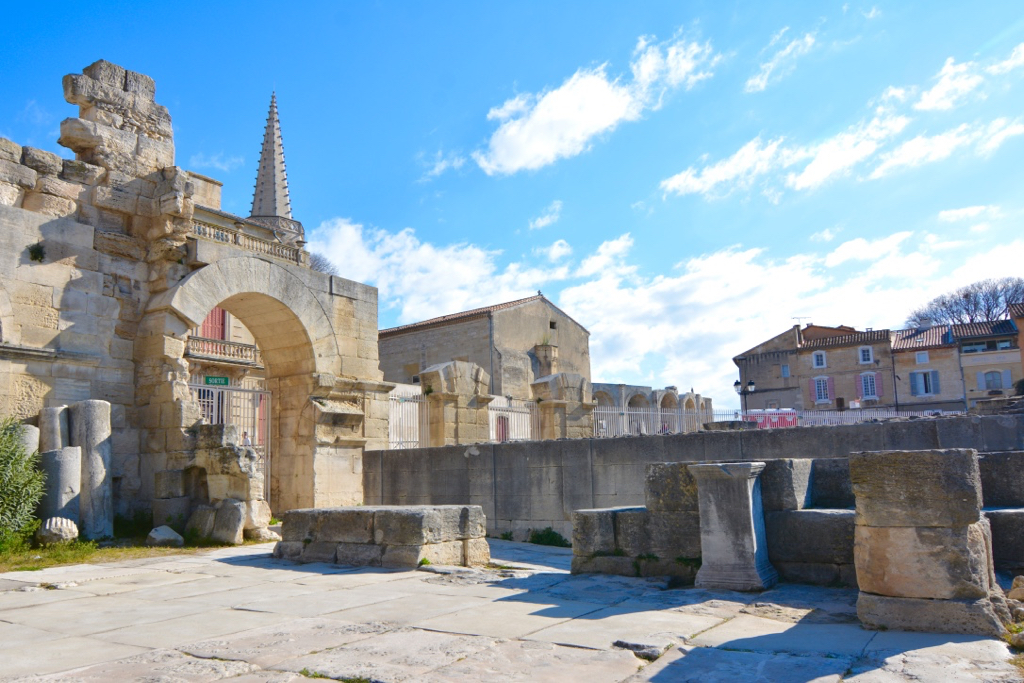 Beyond the ancient Roman ruins, Arles is a charming Spanish-influenced city that stretches across both sides of the Rhône River. It’s a place that’s charmed many acclaimed artists such as Vincent Van Gogh, Paul Cézanne, and Pablo Picasso. In fact, Arles is featured in many of these artists’ works. 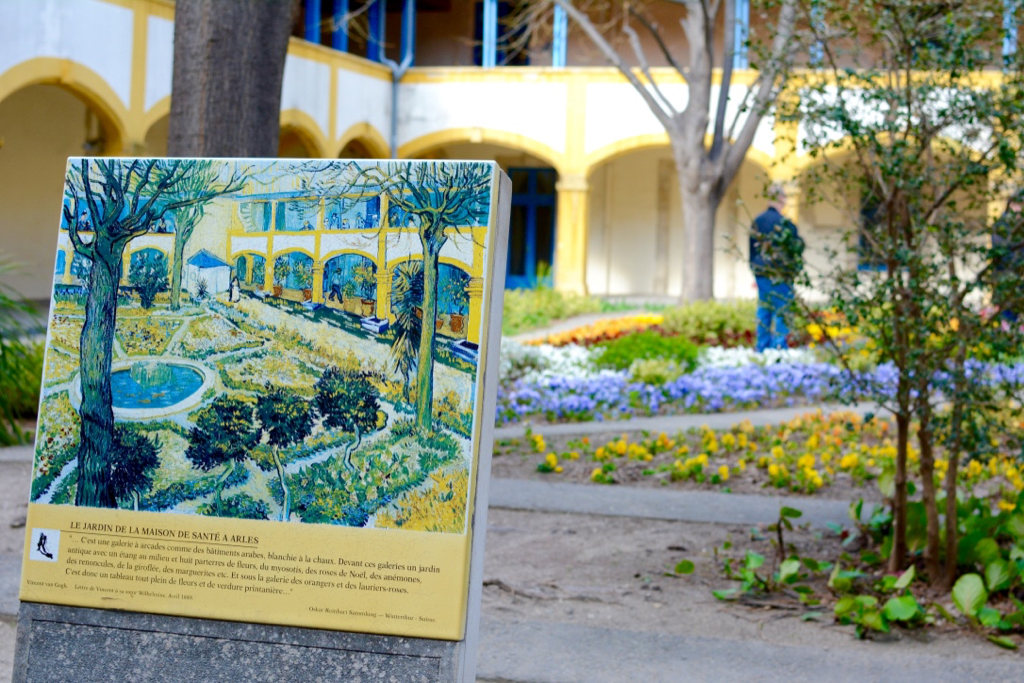 In search of light, Van Gogh arrived in Arles in 1888, and subsequently created more than 300 pieces of art during an 18-month span. Have a glass of wine at the café that inspired The Cafe Terrace on the Place du Forum or visit the perfectly preserved courtyard in the Garden of the Hospital in Arles. Although Arles doesn’t own any of his works, there is the Van Gogh Foundation, which is a collection of over 200 art pieces by 20th century artists inspired by the master. If Picasso is more your taste, visit the Réattu Museum to see its collection of 57 drawings and two paintings by the Spanish artist. 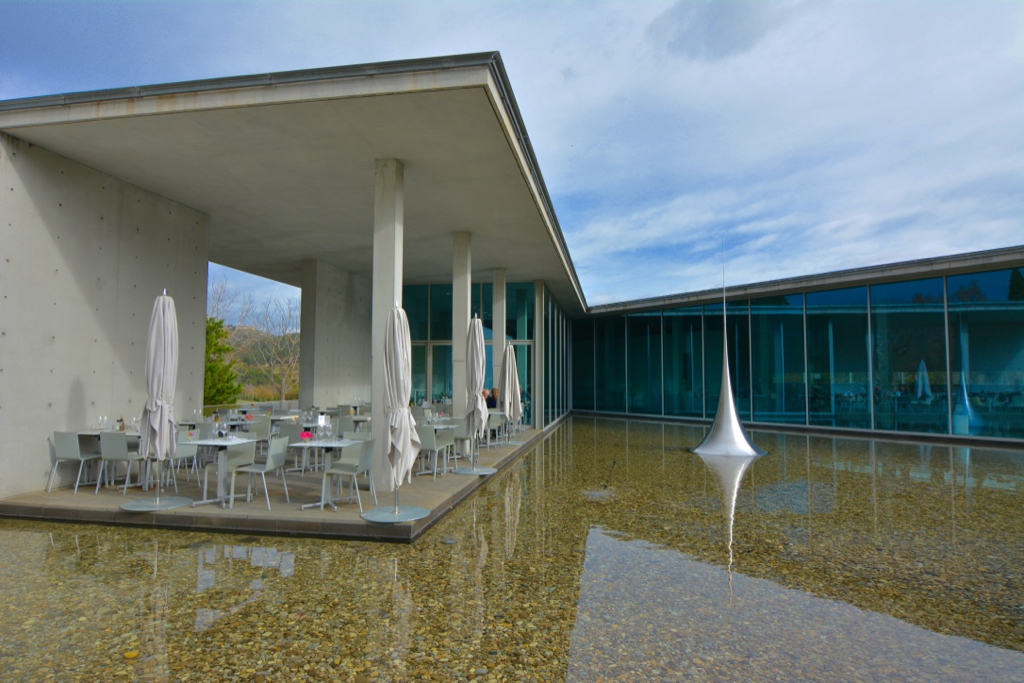 About 45 minutes north of Aix-en-Provence is Château la Coste. The Irish-owned domaine is home to an incredible collection of art and architecture, as well as excellent wine. A self-guided art trail snakes through the vines and features large pieces from artists such as Louise Bourgeois, Liam Gillick, Andy Goldsworthy, and Tom Shannon. 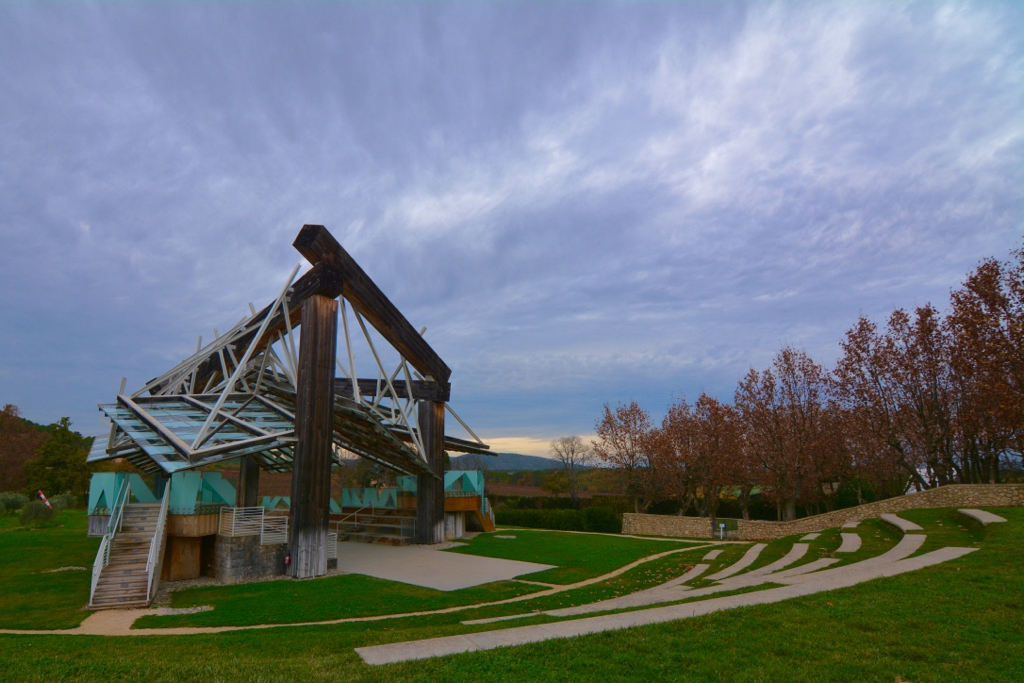 The Pavillon de Musique is by Frank Gehry, who also designed Foundation Louis Vuitton in Paris. Concerts are held here during the summer. There is an art center by Japanese designer, Tadao Ando, who also designed the Modern Art Museum of Fort Worth. Have a wine tasting in the 19th-century farmhouse, dine in the modern Tadao Ando restaurant, and stay in the new hotel that’s to be opened later in 2016. 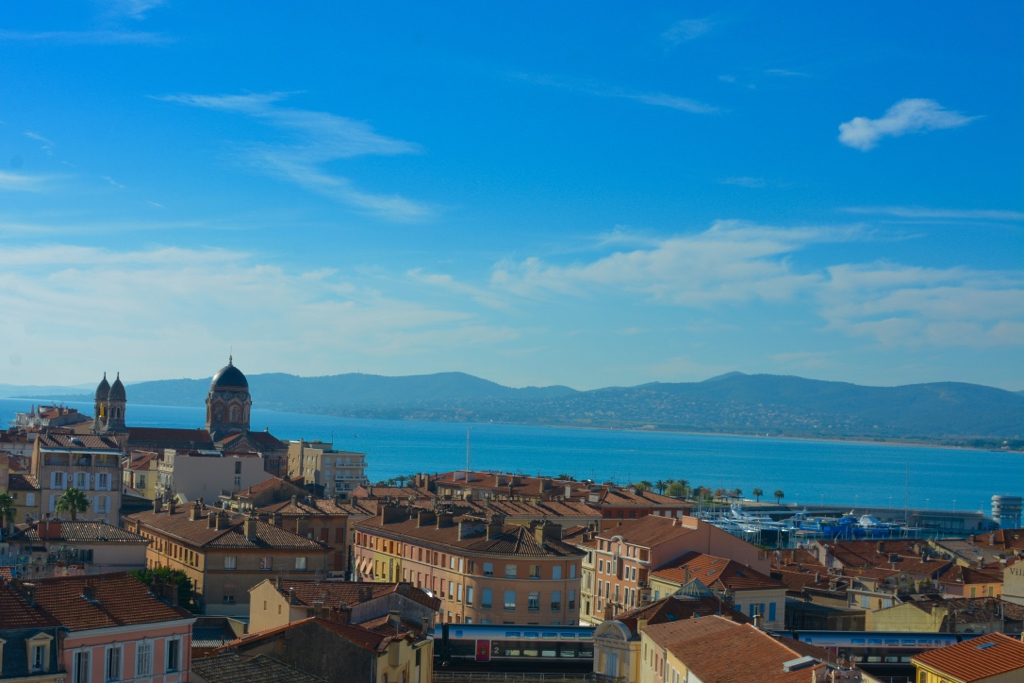 On the French coast between St.Tropez and Nice is Saint-Raphaël. This beautiful place dates to the Roman times and was where American forces landed to help liberate France during WWII. It’s also where F. Scott Fitzgerald wrote his classic book, The Great Gatsby. 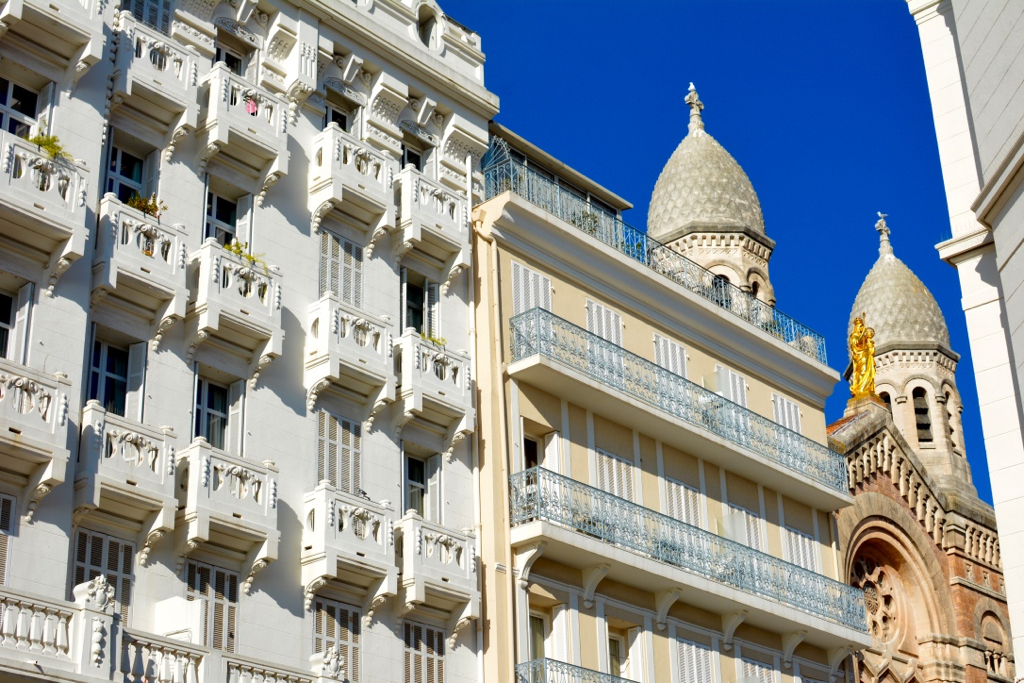 This Côte d’Azur city offers much of the charm and activities of its better-known neighbors without the throng of people. Sand beaches, coves, and turquoise water have drawn visitors to Saint-Raphaël and its 22-mile coastline since the Victorian era. 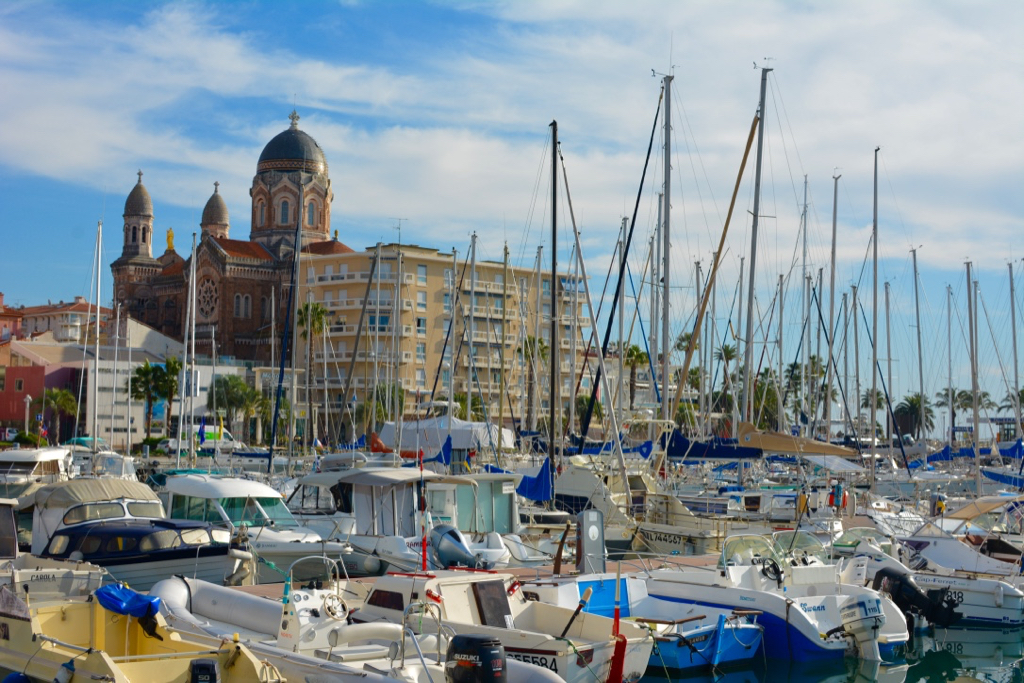 Walk the streets of the old town and visit the Romanesque church dating to the 2nd century. Climb the stairs of the bell tower at the Archeological Museum, which was once San Rafeu church, to get an incredible view of Saint-Raphaël. Dating to the 12th century, the museum is free and full of pieces found in the sea, as well as under the church. 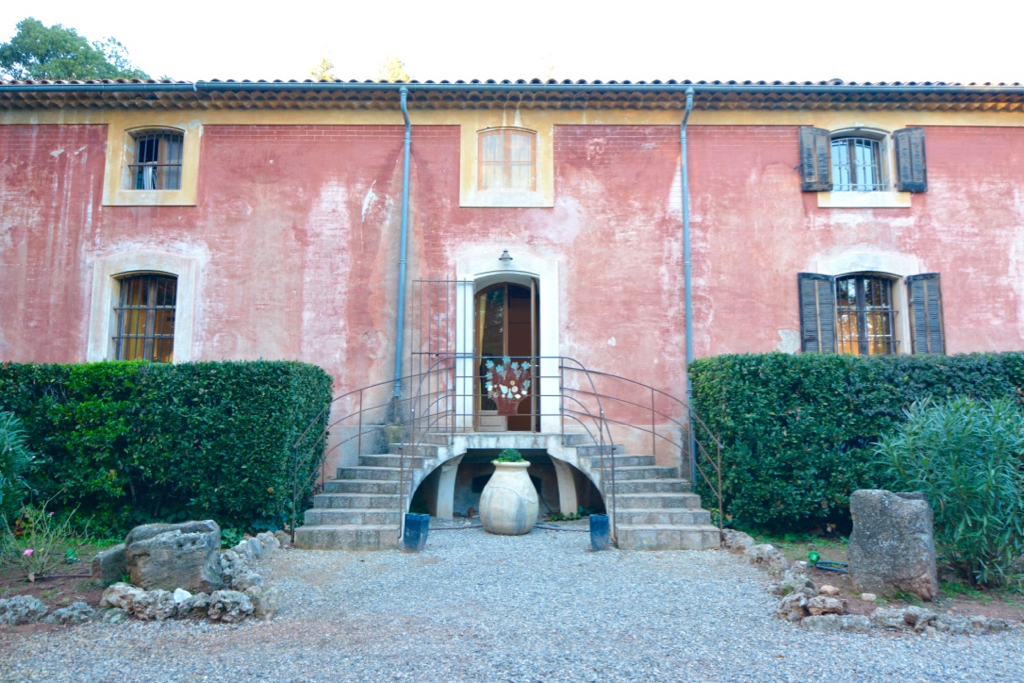 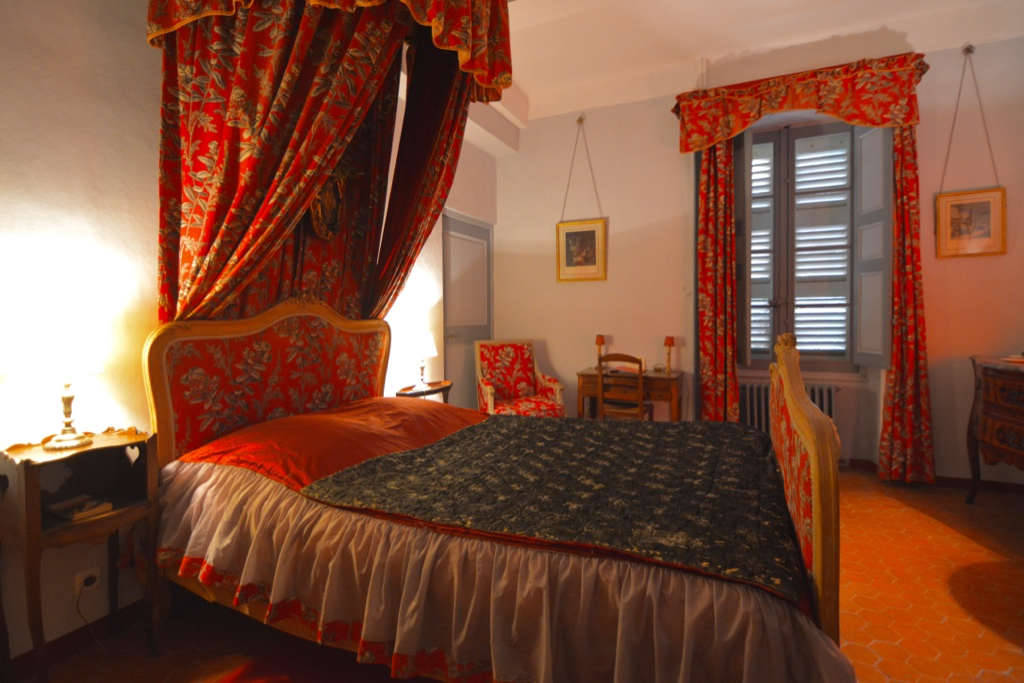 Romans made wine in this spot since the 2nd century B.C., and there is even an excavation on property where Roman ruins were found. The Gallo-Roman farm is around 100,000 square feet in size and is thought to be inhabited from the 2nd century B.C to the 7th century A.C. It’s near a river that borders the estate that Octavius, Antony, and Lepidus signed and created the second Triumvirate, which divided the Roman Empire. 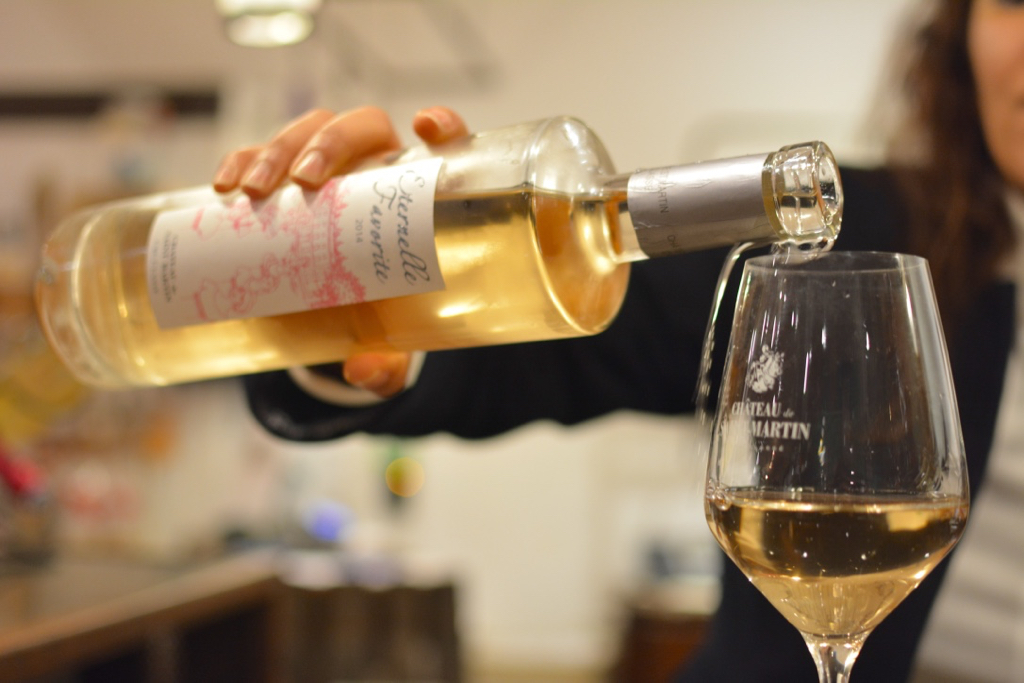 Although Provence is primarily rosé country, Chateau de Saint-Martin also makes reds, whites, sparkling, vin cuit, and eau-de-vie. The winery is one of very few honored with the distinction of cru classé in Provence. Visit the domaine for a tasting, walk through the lush gardens, or stay the night in the family’s chateau, where you can pray in the small chapel or sleep in Ms. De Barry’s great-great-great grandfather’s bedroom in the chateau. The furniture and fabric are original. The bed is original, too, but has been extended to satisfy modern-day sleeping. 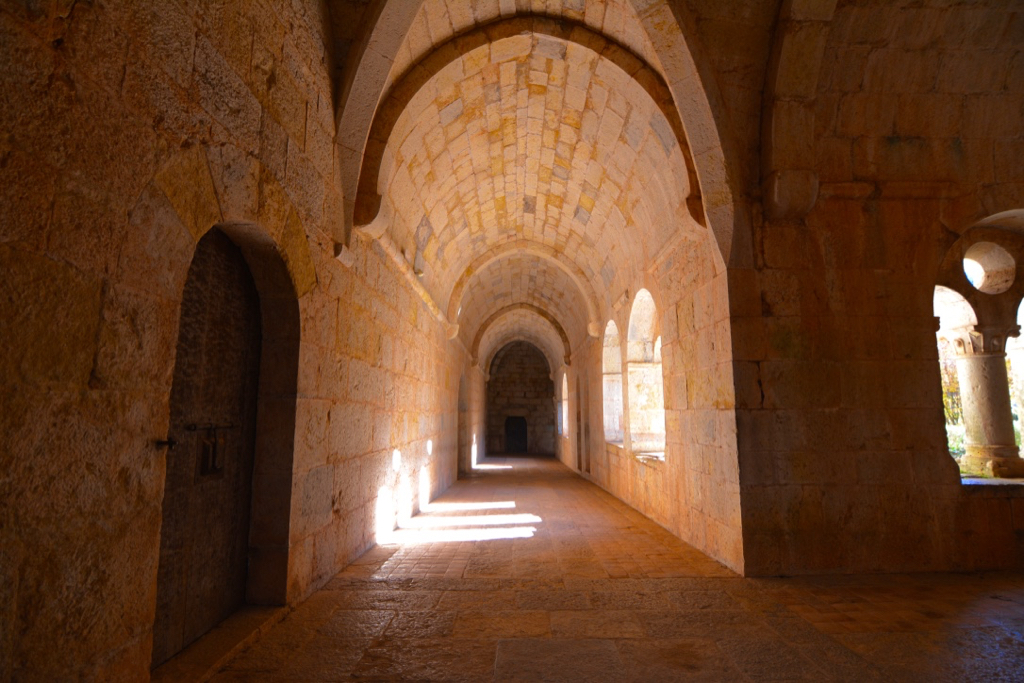 Tucked away in the oak forest of the Var lowlands, just off a windy country road, between the towns of Draguignan and Brignoles, is Thoronet Abbey. Built by the Cîteaux Order in 1146, this is one of the abbeys founded by the Cistercians known as the “three Provençal sisters” {Silvacane and Sénanque are the others}. As one of the first buildings in France to be classified as an historical monument, Thoronet Abbey is beautiful in its starkness and use of the Provençal light. 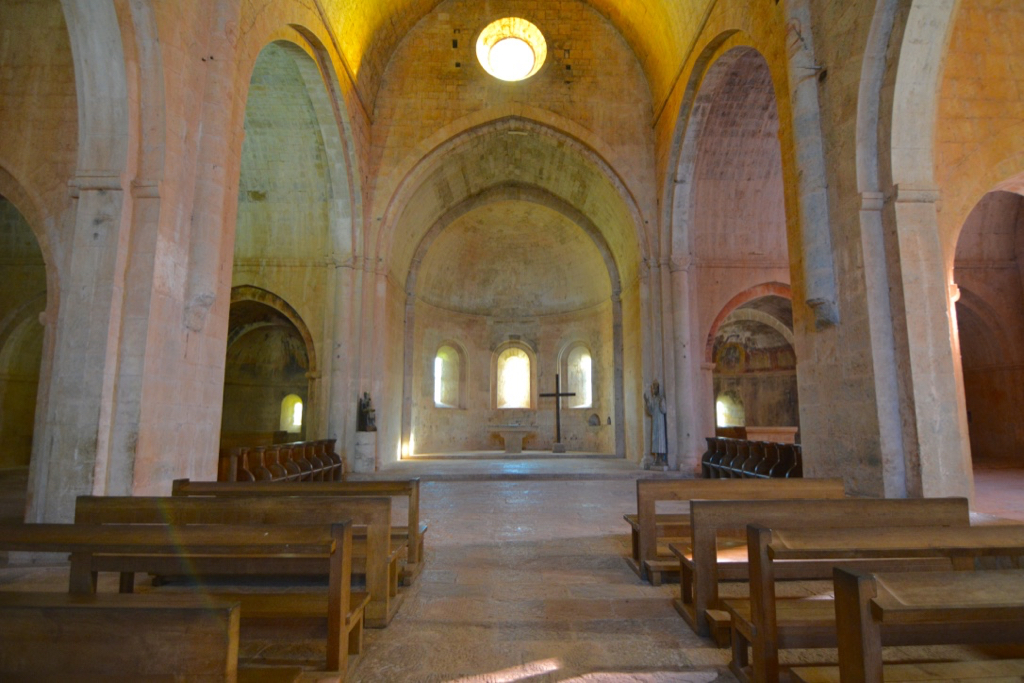 The abbey’s church is regularly noted as one of the top places in the world for acoustics. Its thick, stone walls create a long echo and haunting sound that send instant chills up the spine. Whether it’s a lone visitor testing the church’s acoustics or during July’s Rencontres Internationales de Musique Médiévale {International Gathering of Medieval Music}, the pleasurable sound is one that won’t be forgotten. 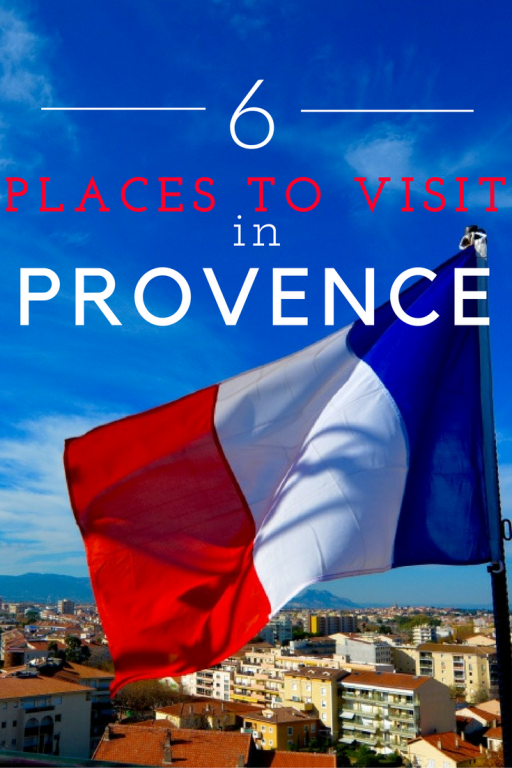 I was a guest of Vins de Provence and Provence Alpes Côte d’Azur Tourisme. In no way was I swayed by the free-flowing rosé, the magical Provençal light, or the pleasurable pace of Provence. As always, opinions are mine.