Mention the French Riviera and visions come to mind of the jet set from Europe lavishly enjoying the turquoise waters of the Mediterranean. Yes, the Côte d’Azur exudes its fair-share of glamour, but it’s much more than Champagne and yachts, particularly the city of Nice. 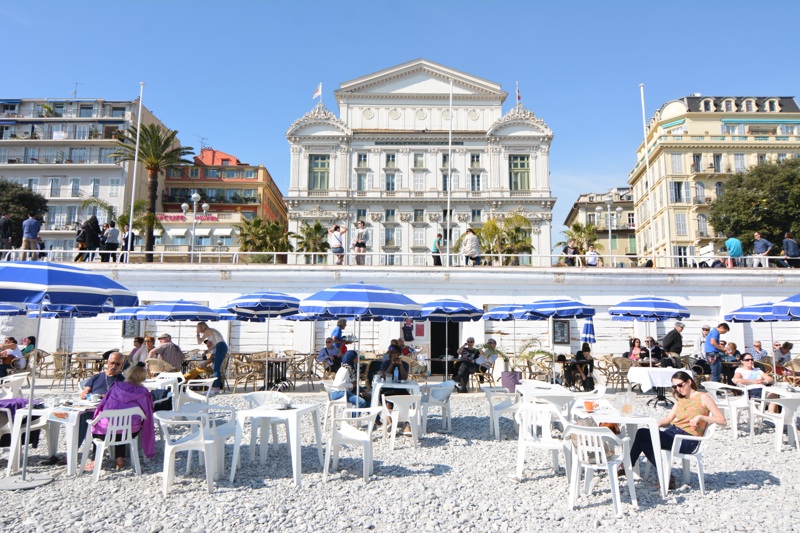 As the fifth largest city in France, Nice is a mix of history, culture, unique cuisine, beautiful vistas, and exceptional weather {around 300 days of sunshine}. The Alps stretch almost to the sea, with the city built into the foothills, just along the water. 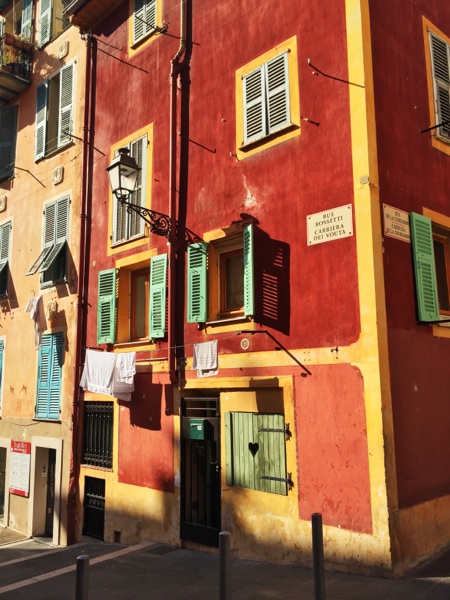 This city in the heart of the French Riviera is close to the Italian border, which explains why it feels more like Italy than France to me. But don’t be mistaken, Nice is 100% French and just another layer to this rich and varied country. 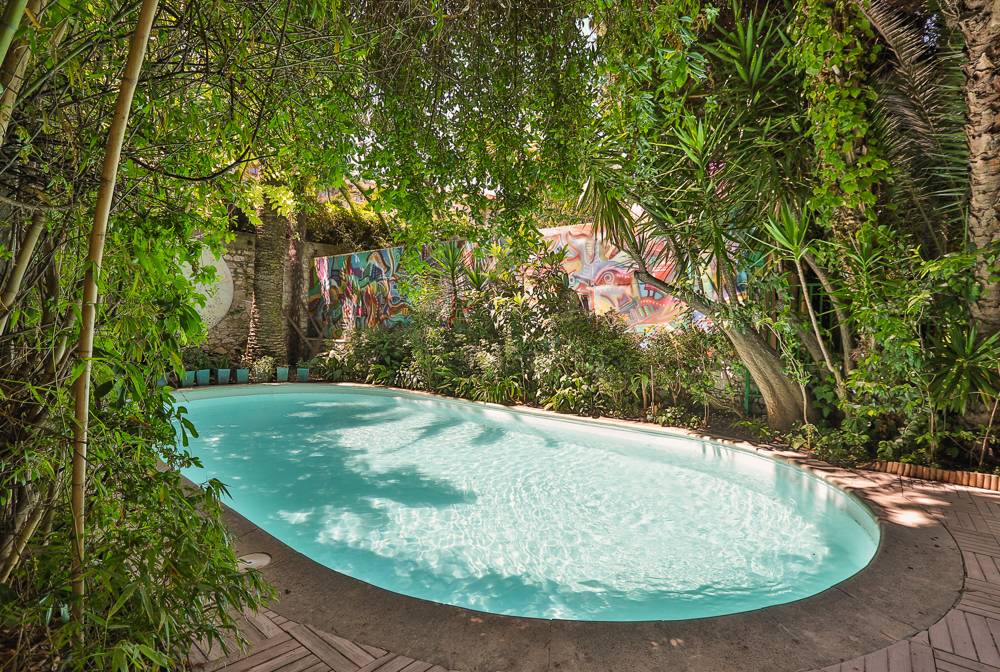 A few blocks off of Promenade des Anglais is the Windsor Hotel. This four-star boutique hotel may not be beachside, but there’s plenty of beauty to be found on the inside. Filled with art, each room is unique in its design. Various contemporary artists designed the artist rooms, while other contain frescoes by Antoine Baudoin. Indeed, the entire hotel is filled with art, with a yearly rotating exhibition. Playful and fun, even the elevator is an artistic experience. When the floor button is pushed inside the rocket-themed elevator, a countdown to blast off accompanies the lift. The tranquil garden filled with bamboo, fruit trees, birds, and a small pool, also contains artist installations.

If you’ve never been to the French Riviera then you’re likely to be surprised by the food. Niçoise cuisine {the term coined for the style of food from Nice} isn’t the typical French food. With influences from the Mediterranean Sea, its warm and sunny climate, and proximity to Italy, the offerings in Nice include lots of fresh fish, vegetables, and herbs, along with Italian favorites such as pizza and gelato. What sets Niçoise cuisine apart from traditional French fare is the use of olive oil rather than butter. After all, the French Riviera is one of the biggest producers of olive oil in France.

Some of the regional dishes that can’t be missed include:

Salade Niçoise—There are many different versions of this typical dish, so it just depends on where you take your table. Basically, it’s sliced tomatoes and hard-boiled eggs with a vinaigrette dressing. Other possible toppings include olives, potatoes, green peas, red peppers, shallots, anchovies, artichoke hearts, and fresh tuna. 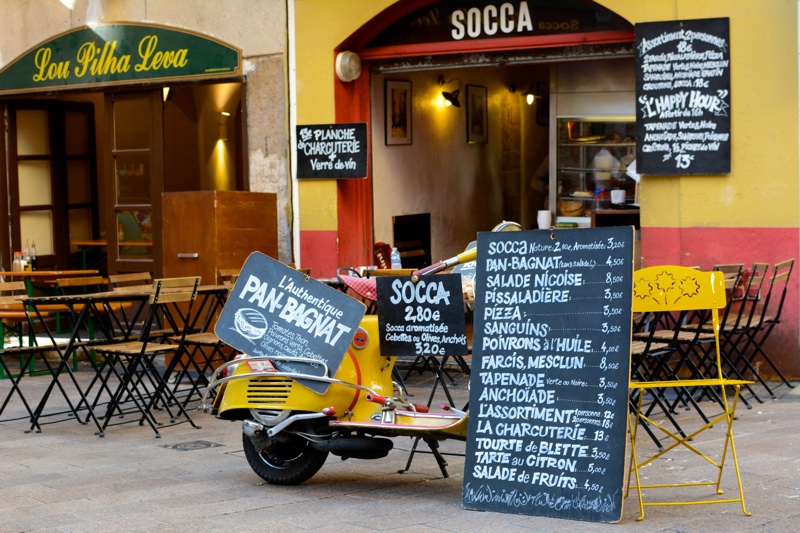 Socca—A typical street food, this chickpea pancake is made in a giant, steel skillet over hot coals. It’s blackend and crispy on the outside, yet soft on the inside.

Pan Bagnat—Literally meaning, “moistened bread,” this round sandwich is basically a Salade Niçoise on a bun. Messy? Yes. Delicious? No doubt.

Pissaladiere—This dish is where Italy meets France. With dough thicker than pizza, pissaladiere is topped with olives, caramelized onions, garlic, and anchovies.

Tapenade—A common starter, tapenade is a paste made of local olives, capers, and anchovies that is served with crispy bread. 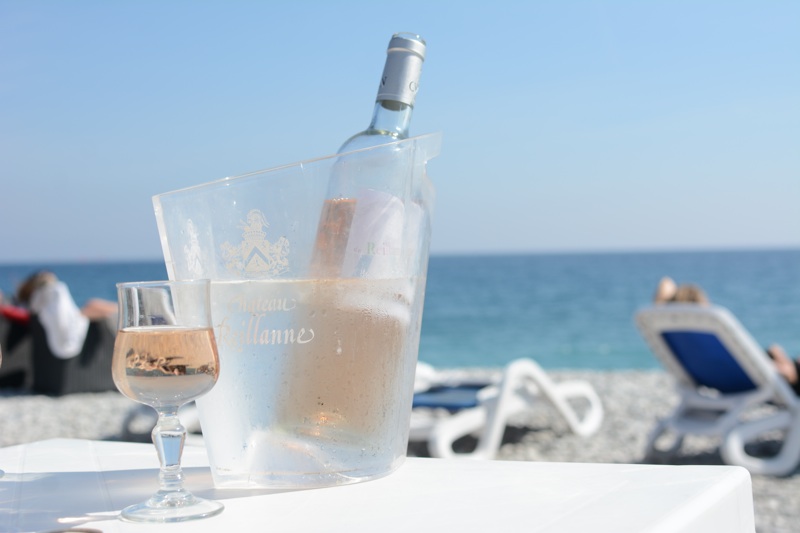 Rosé Wine—Even the biggest wine snob will be tempted to drink rosé while in Nice. Cold, dry, and cheap, the pink vin pairs perfectly with the Mediterranean cuisine.

Farcis—Vegetables such as squash, tomatoes, eggplant, and peppers are filled with a mixture of ground meat, garlic, and breadcrumbs then baked. It can be served warm or cold, but I prefer it hot out of the oven.

With so many places in Nice to eat and drink, here are a few that stand out among the rest: 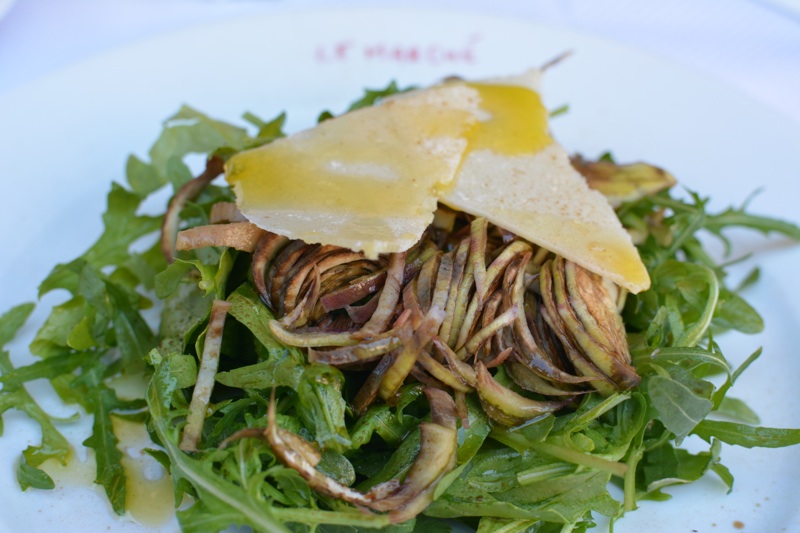 Le Marché—Located on Cours Saleya, home of Nice’s famous antiques market, is the apply named Le Marché. In a sea of other cafés along this Old Town stretch, Le Marché offers a menu filled with typical Mediterranean offerings made with the freshest ingredients. 12-14 Cours Saleya 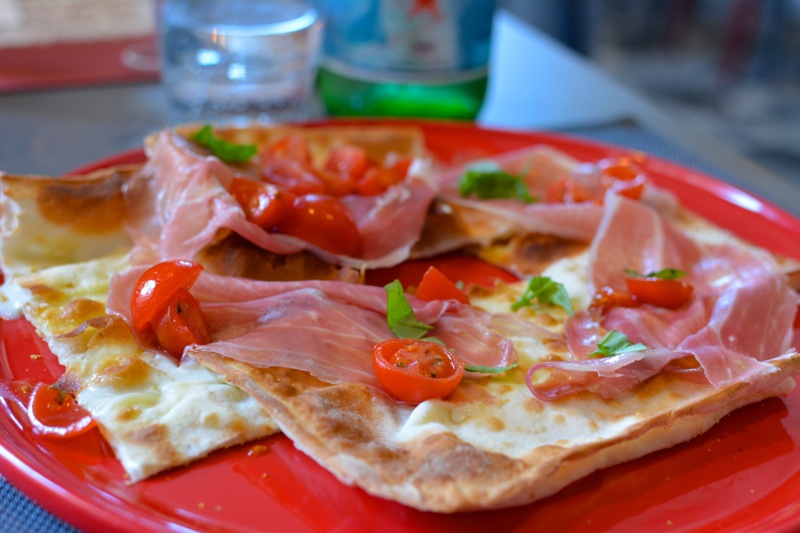 Attimi—Part of the Slow Food Association and meaning “moments” in Italian, Attimi is located on the edge of Old Nice and next to Place Massena. With pizza, pasta, and salads, the menu is simple, but made with the best ingredients from throughout Italy. 10 place Masséna 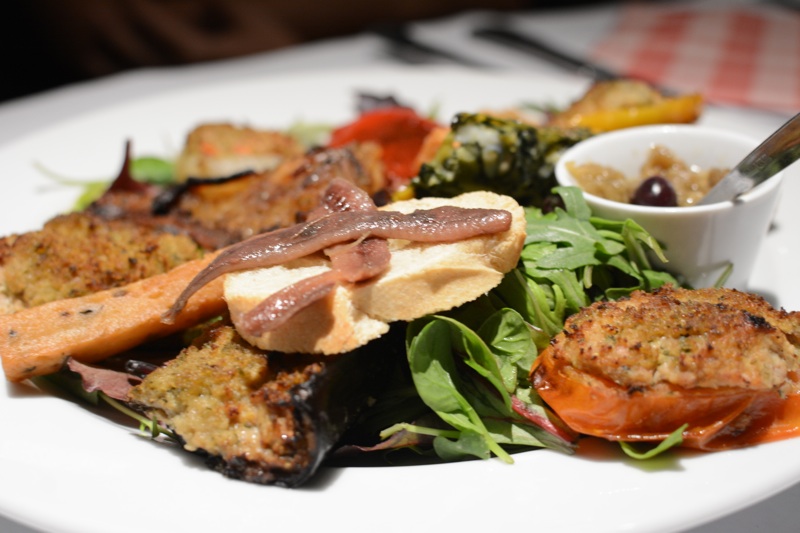 Restaurant Acchiardo—For four generations, the Acchiardo family has been serving up traditional Niçoise cuisine since 1927. This lively place feels more like a home than a restaurant. 38 rue Droite 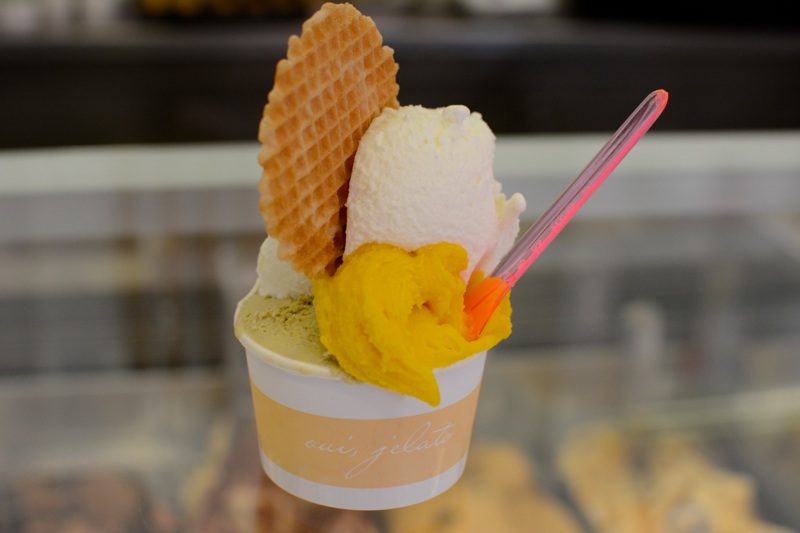 Oui, Jelato—As a delicious alternative to the Nice gelato institution of Fenocchio {over 100 flavors}, give Oui, Jelato a chance. This shop has been around since 2005 and offers homemade Italian ice cream made with the freshest ingredients. Get a scoop of the mango and yogurt flavored, and you’ll be in heaven. 5 rue de la Préfecture 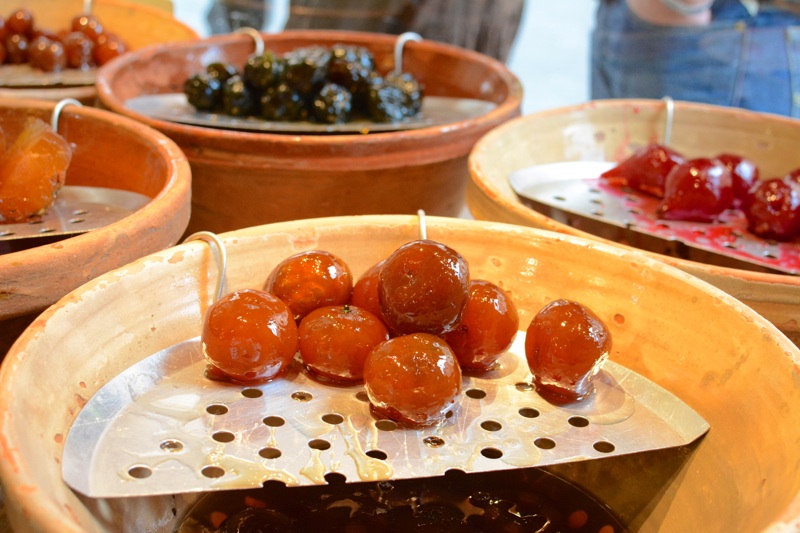 Maison Auer—In business since 1820, this traditional chocolaterie and confiserie is treat to enter. The shop is just as divine as the sweets it makes. A variety of chocolates line the shelves, but it’s the candied fruit known as Caisson de fruits confits that are the most unique. Try the whole candied clementine orange. 7 rue Saint-François de Paule 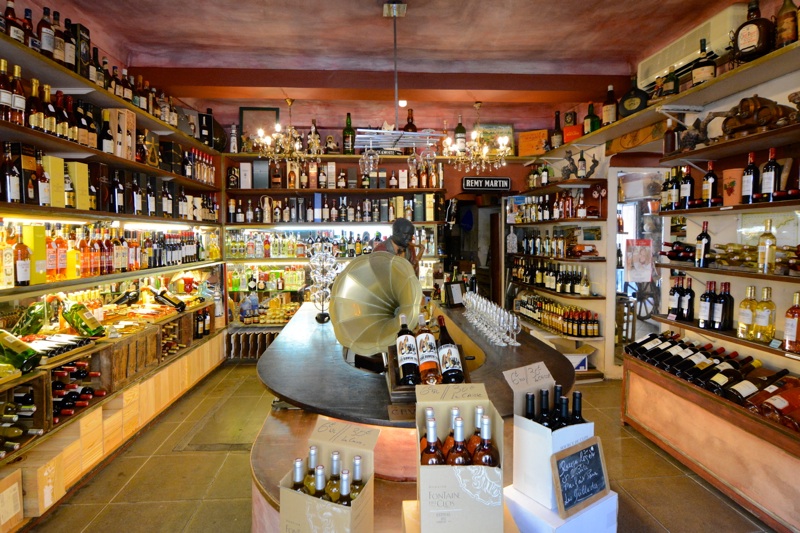 Cave Bianchi—Part wine shop and part tasting room, Cave Bianchi has been pouring vin in Nice since 1860. Stop by for the twice per day tastings {12:00 and 6:00} or simply to pick up a bottle from one of the local producers. 7 rue Raoul Bosio

It’s tempting to sit in a lounger with a bottle of rosé on the smooth, rocky beaches of the Mediterranean. However, there’s so much more to Nice to enjoy. Whether exploring the various parks and gardens, wandering the colorful streets of Old Town, or checking out one of the many museums or galleries, the options for visitors abound. Here are a few of my favorites: 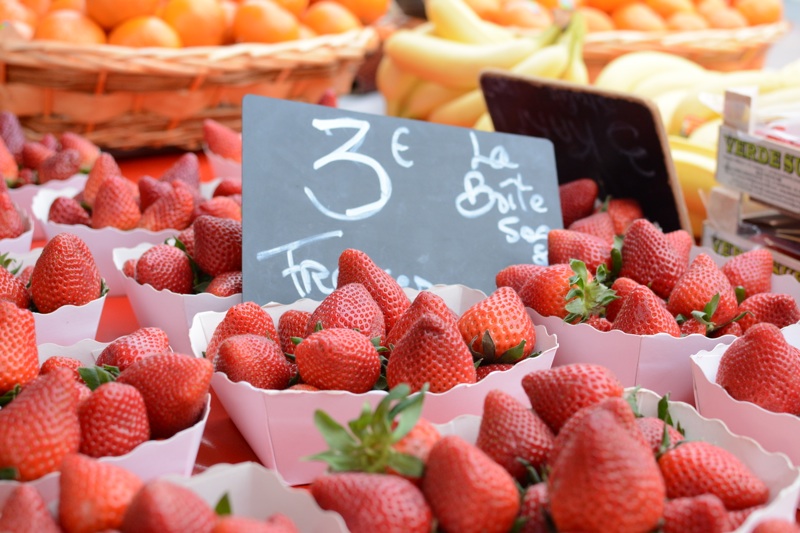 Cours Saleya—This pedestrian-only street in the middle of Old Town was built on ramparts that were dismantled during the 18th century. On Mondays, it’s home to one of France’s most famous antiques market, while the rest of the week, the fruits and vegetable market sets up shop. 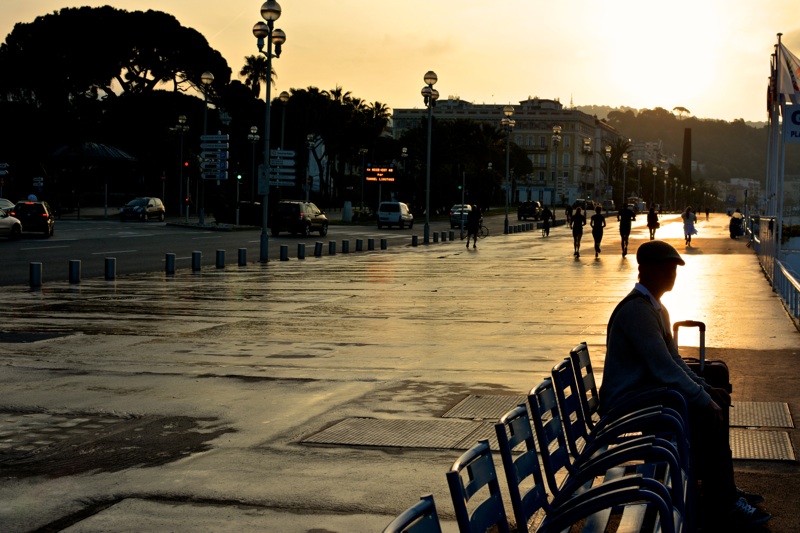 Promenade des Anglais—One can’t rightly visit Nice without spending a good bit of time walking along this historical stretch. Running parallel to the Baie des Anges, the promenade is the place to people watch, ride bikes, and enjoy a glass of rosé at one of the many restaurants along the beach. The sunrise and sunset from here are both spectacular to see. 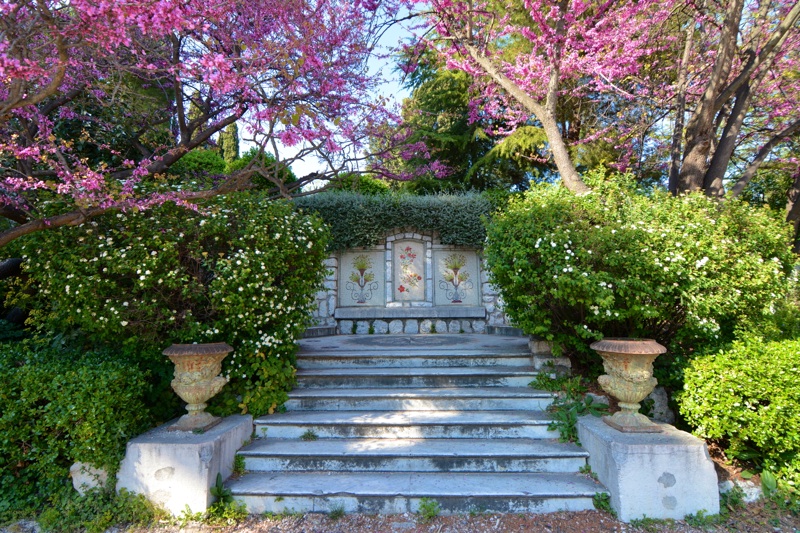 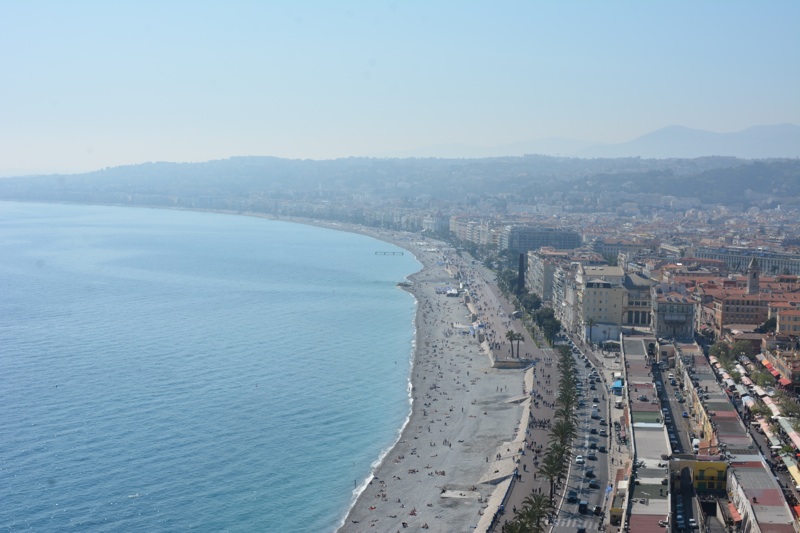 Castle Hill—Climb the incredible number of stairs or simply take the elevator, but make it a point to go to Castle Hill. Now a park and botanical garden, this was the site of the first town founded by the Greeks. There are still some preserved remnants from this time, along with remains of an 11th-century cathedral. Castle Hill also offers one of the best vantage points with views of Baie des Anges, the port, and Old Nice. 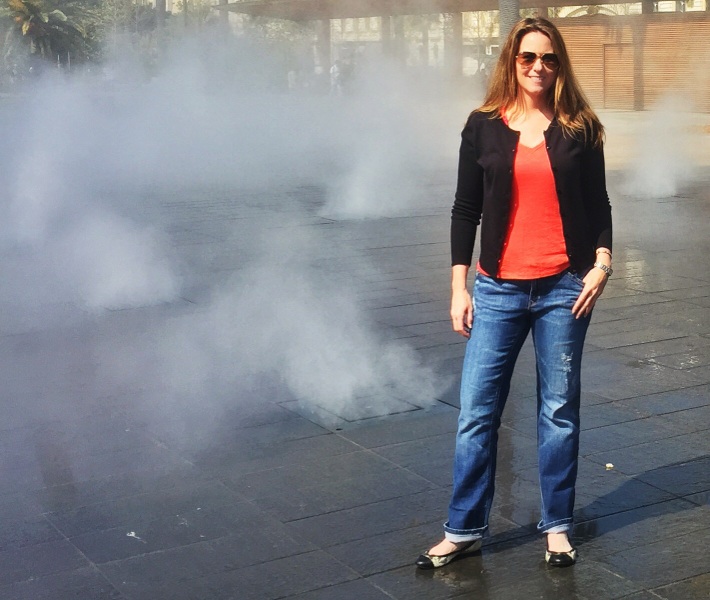 Promenade du Paillon—Lined with palm trees, this modern green space in the heart of Nice runs from Promenade des Anglais to the Museum of Modern Art and Contemporary Art. Filled with playgrounds, classic and modern sculptures, and an interactive water feature, Promenade du Paillon is a pleasant surprise. There’s also free wi-fi available for those looking to stay connected. 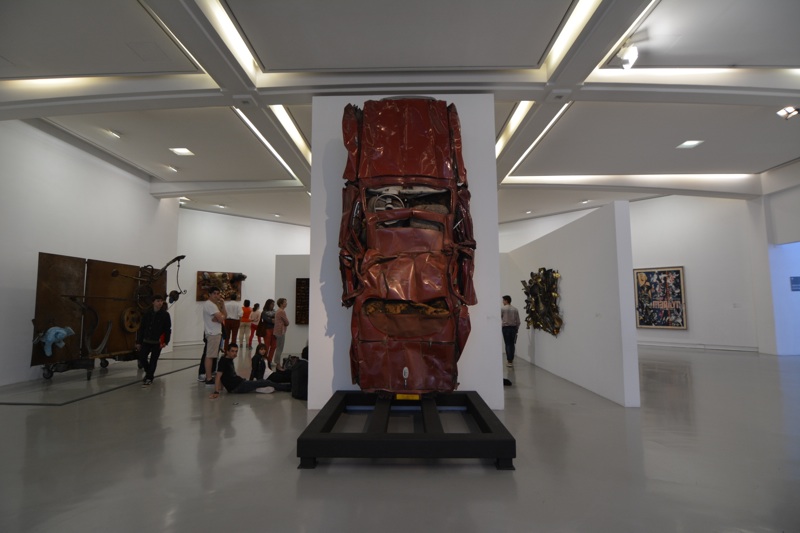 Museum of Modern Art and Contemporary Art {MAMAC}—With works from artists such as Andy Warhol and Cesar Arman, the MAMAC is impressive even for a novice. The building is just as impressive as the art inside. With glass passageways connecting the four square towers, don’t miss going to one of the rooftop terraces for an excellent view over Nice. 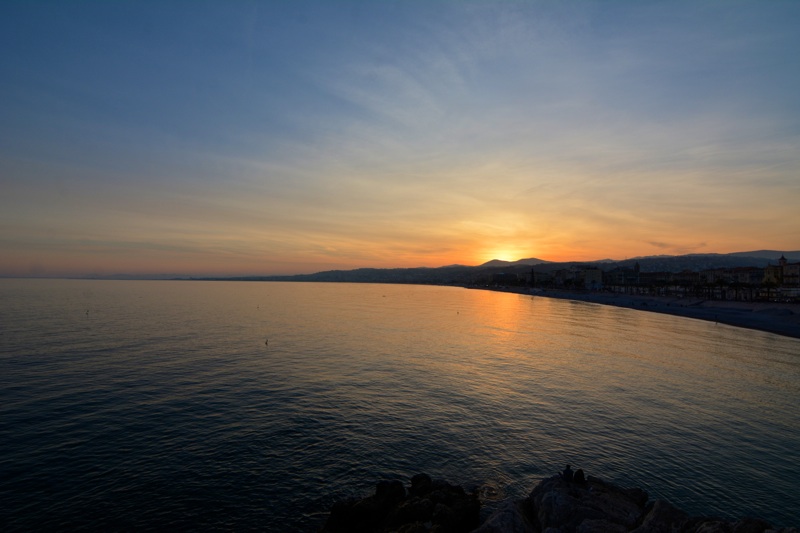 I’m craving another trip to the south of France. As Paris heats up, I can hear the Mediterranean calling my name. I want to watch the waves disappear over the rocky, white beaches. Sipping rosé under a blue and white striped umbrella would be heavenly. And strolling the colorful, narrow streets of Old Town would be a feast for my imagination. There’s something about Nice and Côte d’Azur that leaves me longing for more–48 hours just wasn’t enough. 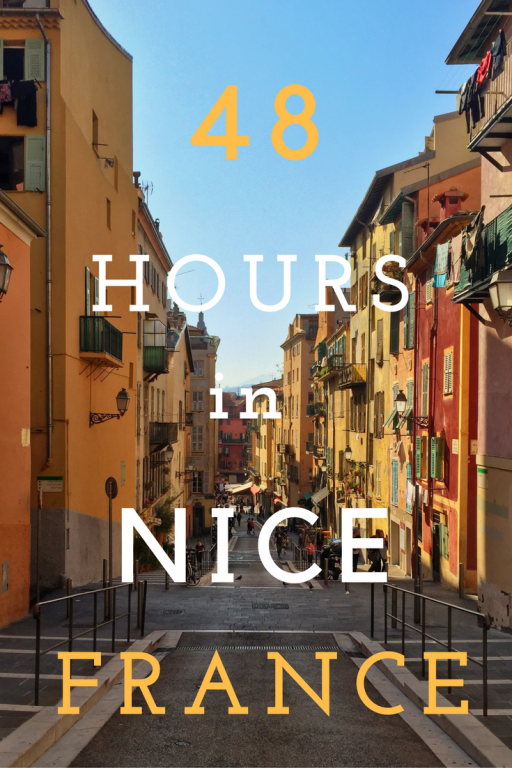 I was a guest of Atout France and Nice Tourisme. In no way was my opinion swayed by the warm sea breeze, the sun-kissed skin I acquired, or the never-ending supply of olive oil. As always, opinions are mine.