I’ve never been one much for bodies of water whether it be brooks, streams, rivers, ponds, lakes, seas, or oceans. I’d like to think it has to do with not spending much time around any of those things growing up, but perhaps it has more to do with the lack of control and the unknown that lies beneath. I almost drowned floating a river in my 20s, so to say I have trepidation when it comes to water deeper than my bathtub is an understatement.

In March, I went to Costa Brava, Spain with Charming Villas Catalonia. Thrilled to explore more of the region, I couldn’t wait to see the final itinerary. The first three days were to be spent in Cadaqués, a former fishing village set on the Mediterranean Sea. Just beyond Cap de Creus National Park, Cadaqués is the former home of Salvador Dali. Nice. I would get to experience the Mediterranean beyond Barcelona and listen to the soothing sounds of the sea. Scanning down to day two, I saw that I’d be sailing around Cap de Creus, the most eastern point of Spain, in a traditional Catalan fishing boat. 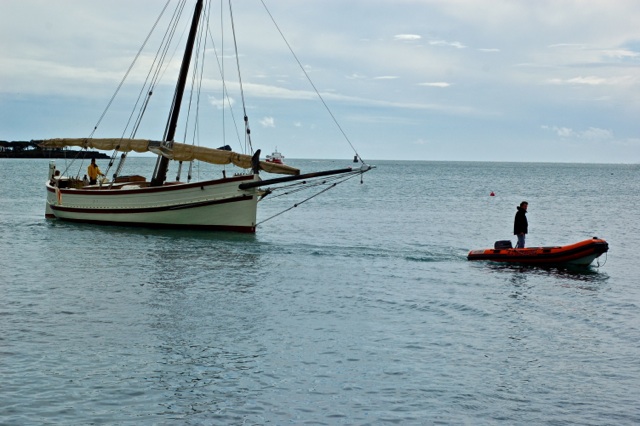 After I rid Andy Sandberg and T-Pain’s song, “I’m on a Boat” from my mind, my stomach started doing flips. Watching the waves roll in and out safely from the shore was one thing, but boarding a gas-powered dingy to be transported to a wooden fishing boat was an entirely different story. Like I do with most things I’m frightened of {heights}, I simply blocked the Gilligan’s Island/Jaws/Titanic scenarios from my mind. Instead of dwelling on my irrational fear, I decided to focus on the new experience I would get to have. After all, it’s not everyday that I get to cruise around one of the world’s most beautiful coastlines on a private boat.

I woke up on day two of my Catalan trip to less-than-desirable conditions. It was windy, cloudy, and a bit rainy—not exactly conducive for cruising around Cap de Creus, Spain’s most eastern point. By mid-morning the clouds parted and it was confirmed that the ship would sail. Dressed in my best sailor’s outfit, as you do, I boarded the small boat that would take me to the Sant Isidre. 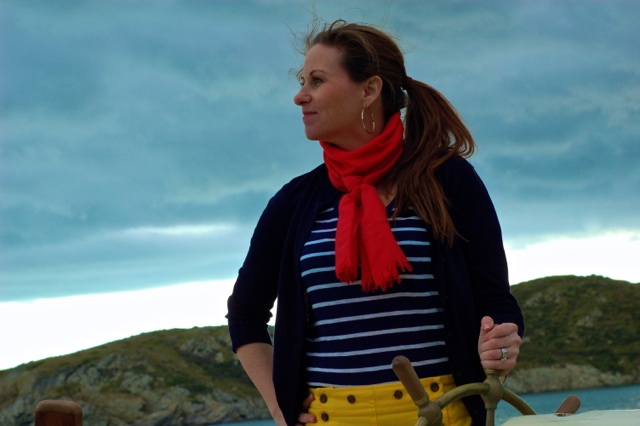 Originally a fishing boat built in 1925, the Sant Isidre was handed over to the Spanish Republic’s navy after being busted for carrying some sort of contraband. Then it was used as a warship during the Spanish civil war before being left to decay in the 90s. It was later restored and once again cruises around the Spanish Mediterranean. 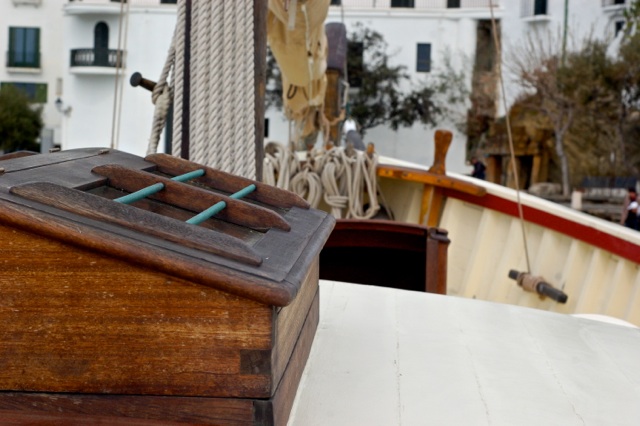 The vessel was gleaming. It’s white paint looked as if it’d been recently freshened up. Two maroon stripes ran the length of the boat and written in script was Sant Isidre near the bow. Thick ropes rose into the sky and attached to the mast and the giant sails were safely stowed away. Even in my limited experience with boats, I could tell this was a special ship. 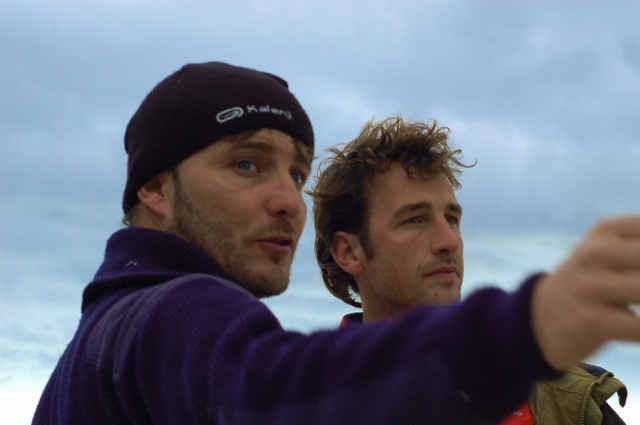 For four hours, the two men manning the ship would hug the jagged coastline of Costa Brava. We passed a lighthouse, gorgeous sea-front homes, and even caught a glimpse of France. Despite Tramuntana, the name the locals have given the forceful winds coming off the nearby Pyrenees Mountains, the water was smooth. As the boat glided along the water, cava was opened and shared.

Lunch was prepared on the boat and eaten in a beautiful, secluded cove. Fideua, a traditional Catalan dish made of noodles and prawns, was eaten. And for desert, taps were served. Shaped like a cava cork, this cake-like sweet is generously sprinkled with powdered sugar and a favorite of Catalans. 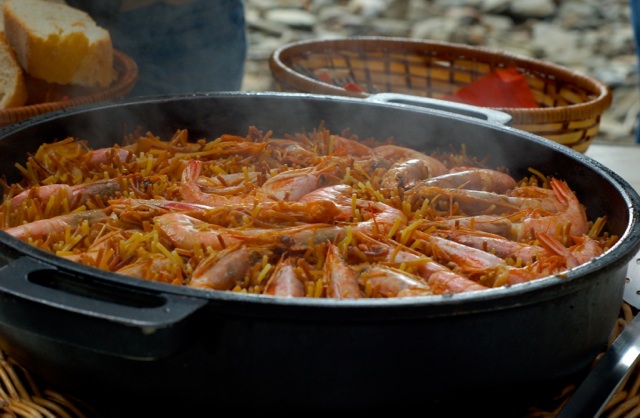 With a full stomach and the clouds beginning to darken, it was time to board the dingy, get back to the Sant Isidre and return to Cadaqués. I didn’t have the trepidation that I’d had a few hours earlier. Perhaps it was the cava or the fact that I was on a sugar high from the taps, but I felt comfortable and certainly at ease. 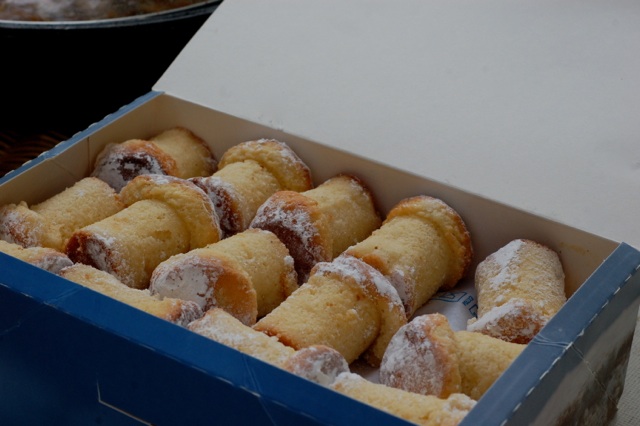 Maybe I’d found my inner sailor’s soul. At the very least, I found my sea legs. No longer was I thinking about the ship sinking or what was swimming around ready to devour me whole.  Instead I found serenity in watching the horizon. The rising and falling of the ship reminded me of sitting in a rocking chair on the biggest front porch ever. 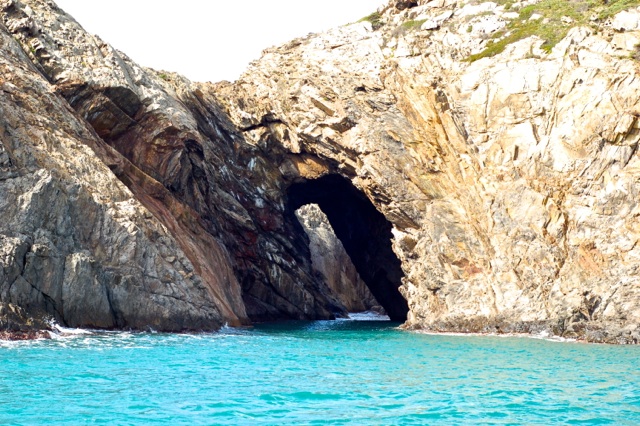 I couldn’t wait to explore the Mediterranean by boat again. Hopefully it would be in warmer weather so I could don snorkeling equipment and truly learn what lies beneath the brilliant turquoise water. I imagine it’s splendid, just like my ride on the Sant Isidre. 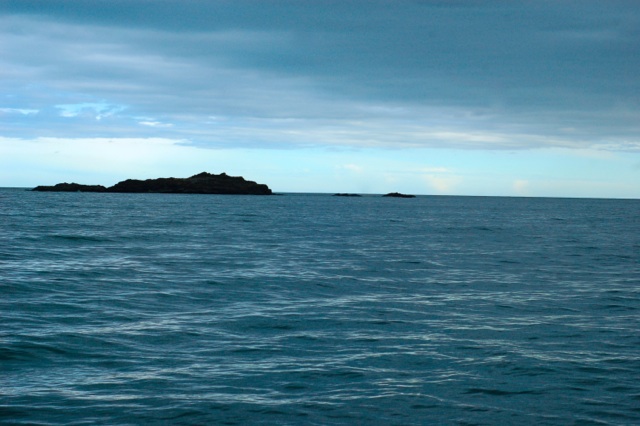 I was an invited guest of Charming Villas Catalonia, however the opinions expressed here are truly my own. In no way was I swayed by the fabulous boat, the ever-present salty sea air of Cadaqués, or the prawns and cava. Find more information on Sant Isidre on their Website.