Lausanne is often overlooked when talking about Switzerland’s most prominent tourism hubs, but over time this had an unexpected upside. The city became something of an acquired taste, a mélange of cultural influences that Switzerland is famous for, and a distinctly local identity that makes it quintessentially Swiss. Believe it or not, there are plenty of things to do in Lausanne, especially if you love the outdoors.

Where to Stay in Lausanne

Like other Swiss cities, it is not inexpensive by any stretch of imagination. For most people wanting to enjoy their stay, this calls for some preparation, and hotel prices often make it so that there’s little compromise to be had. Serviced apartments for rent, a niche market that has sprouted in the past few years, seeks to act as a sort of a mediator between luxury apartments and a comfortable, leisurely, but quality stay. 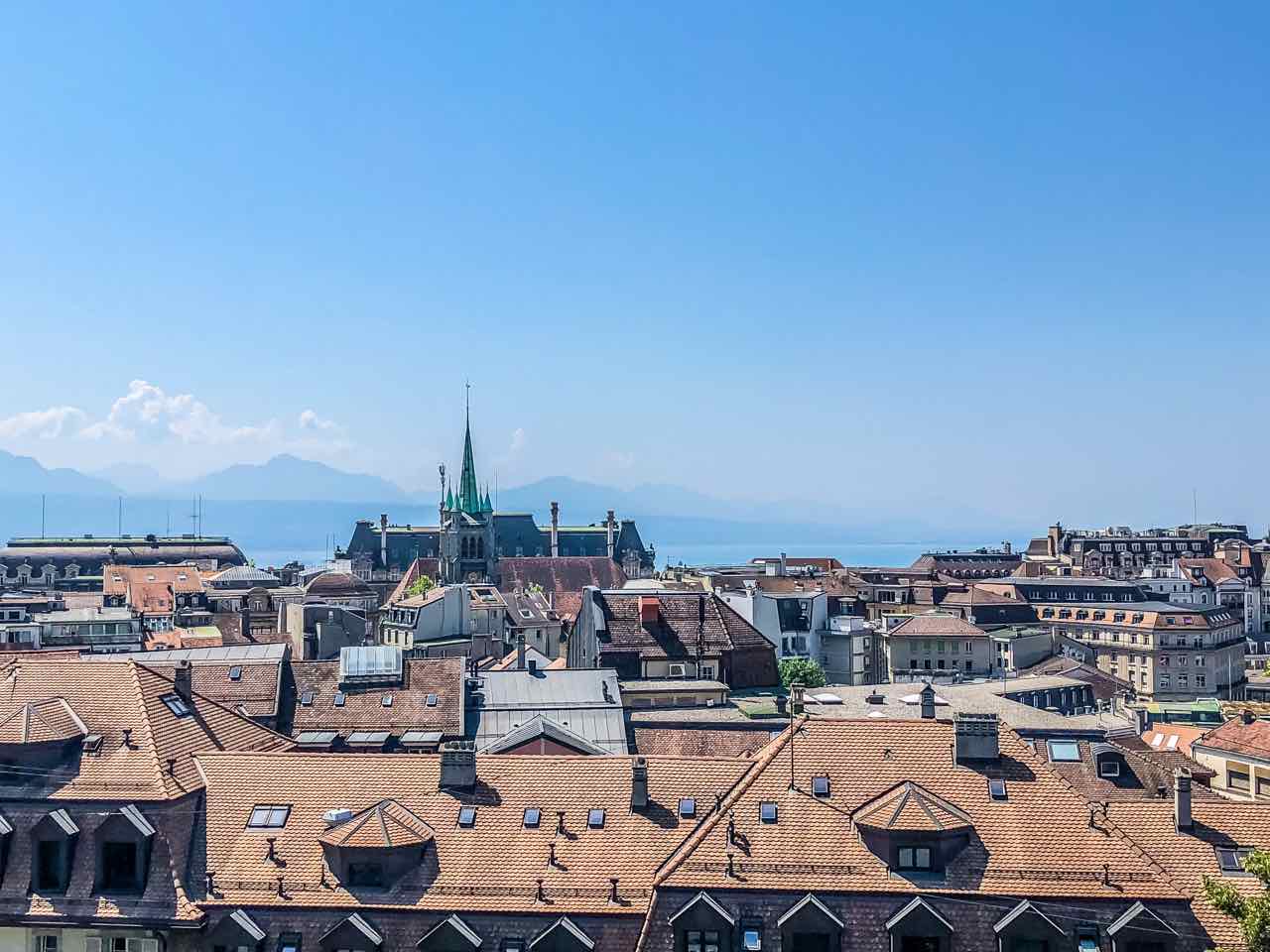 Furnished apartments in Lausanne come with all the amenities you’d expect from a traditional suite, but the concept behind them has a knack for making you feel right at home: there is a true personal sense of privacy that traditional lodgings struggle to offer, and while they are often geared towards the corporate traveler, there is a comfort to be had in their carefully furnished rooms, welcoming you in Lausanne even before you start exploring the town’s attractions.

Things to do in Lausanne 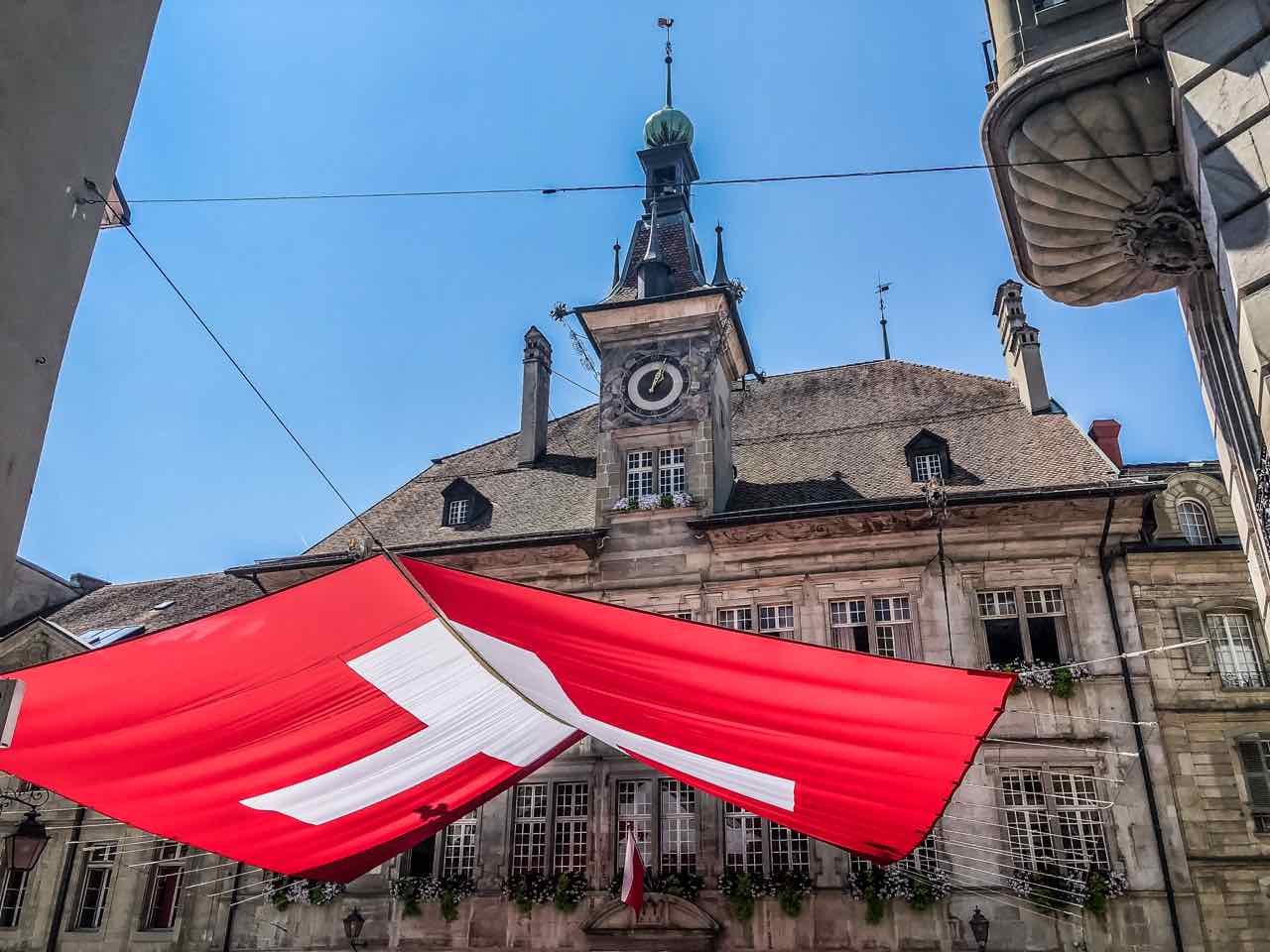 To understand Lausanne is to understand the unique position it occupies. Situated on the coastline of Lake Geneva, it does not boast with the quickest access to the Alps, or the vibrancy that other, bigger cities like Geneva and Zurich possess. Still, for a city whose population is in the low six figures, Lausanne can rightfully claim it’s far from the margins, being the smallest city on the planet to have a subway system. 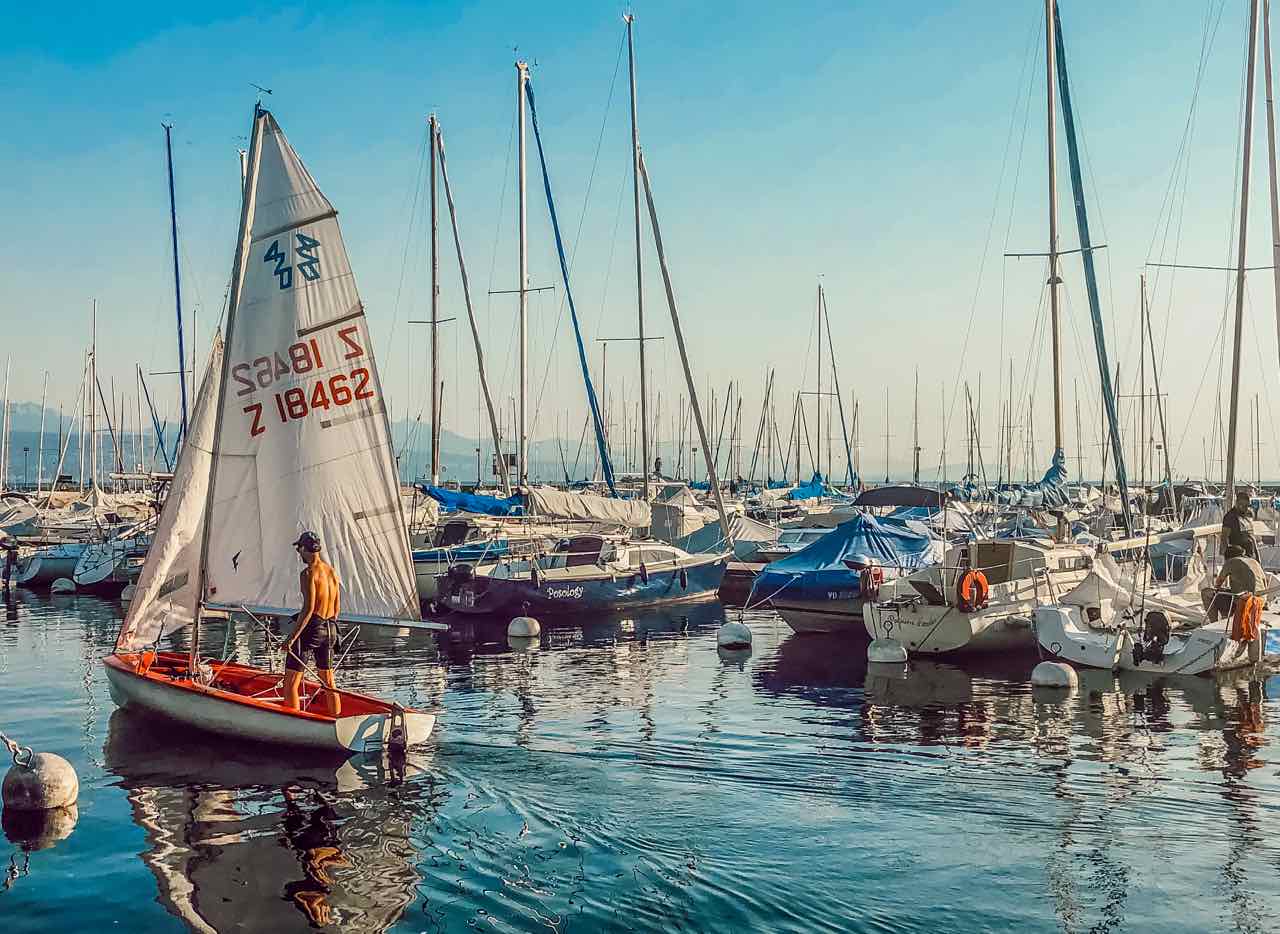 Lausanne is one of the headquarters of global sport and is recognized as the Olympic Capital. Pierre de Coubertin moved the IOC headquarters to the city after World War I because of the country’s neutrality. Now, the International Olympic Committee (IOC) is situated here, as is the Olympic Museum, the Olympic Promenade, and the Sports Trail. There are also plenty of venues to practice sport, if you’re looking for something active to do in Laussane.

Not to be confused with Paris, Lausanne has its own Notre Dame, praised by many as the most notable of Swiss cathedrals. Placed in the very heart of the Old Town, this Gothic edifice still dominates the city’s skyline. It represents a pilgrimage for both the lovers of both architecture and music, having one of the greatest pipe organ instruments in the world, manufactured in the USA and brought – with all of its 7,000 pipes – to Lausanne in 2003. If this is not enough sound for you, its seven bells still chime daily, being added one by one over the course of centuries, each having a character and a note of its own. 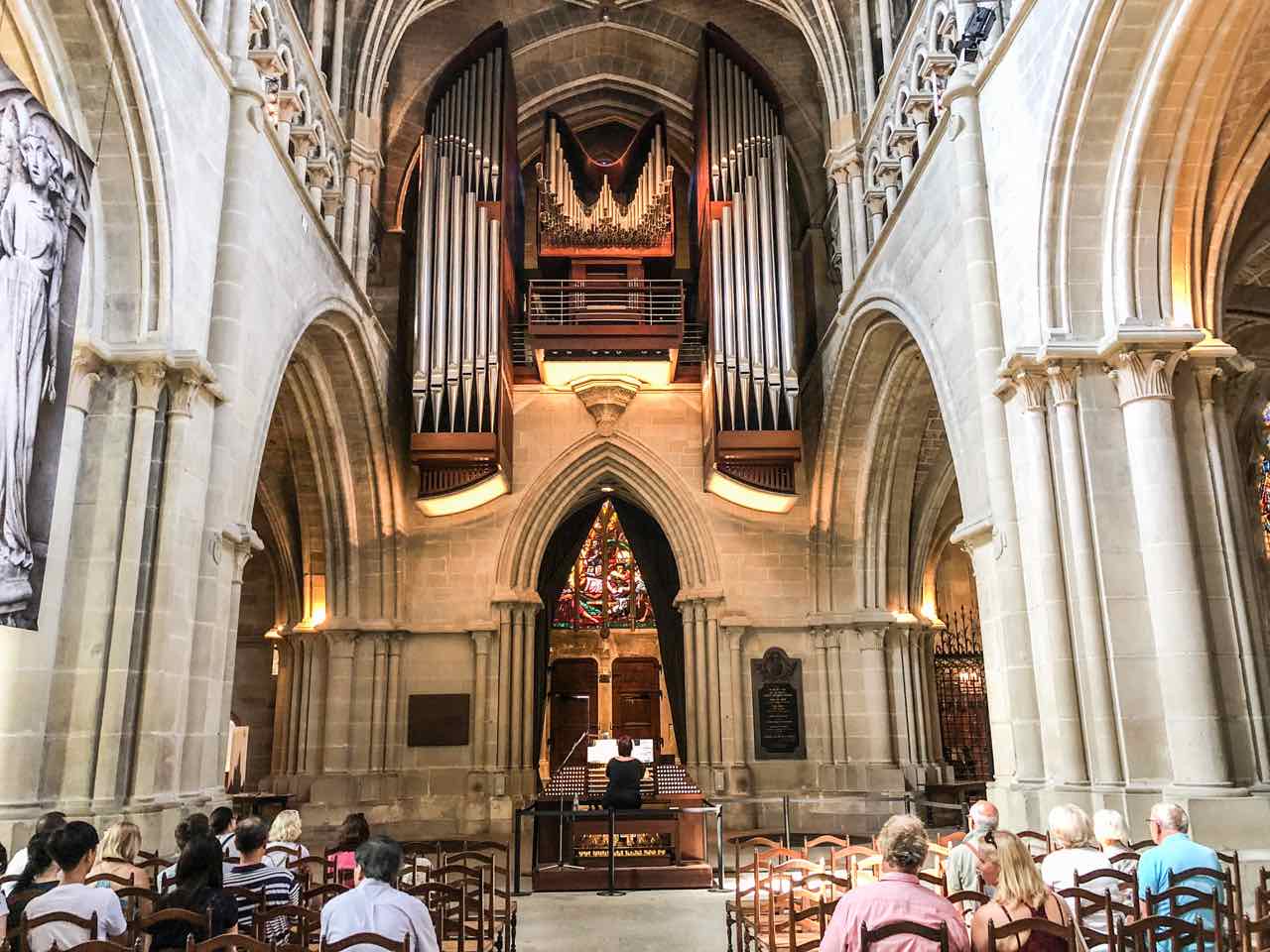 This cathedral is a symbol of the spirit of Lausanne. Its importance is twofold. On the one hand, it is a staunchly traditional building, but on the other it also exemplifies the industrious spirit that has characterized the city over the ages. It has maintained and proudly displayed each of the additions that, one can say with certainty now, made it more than a sum of its parts. 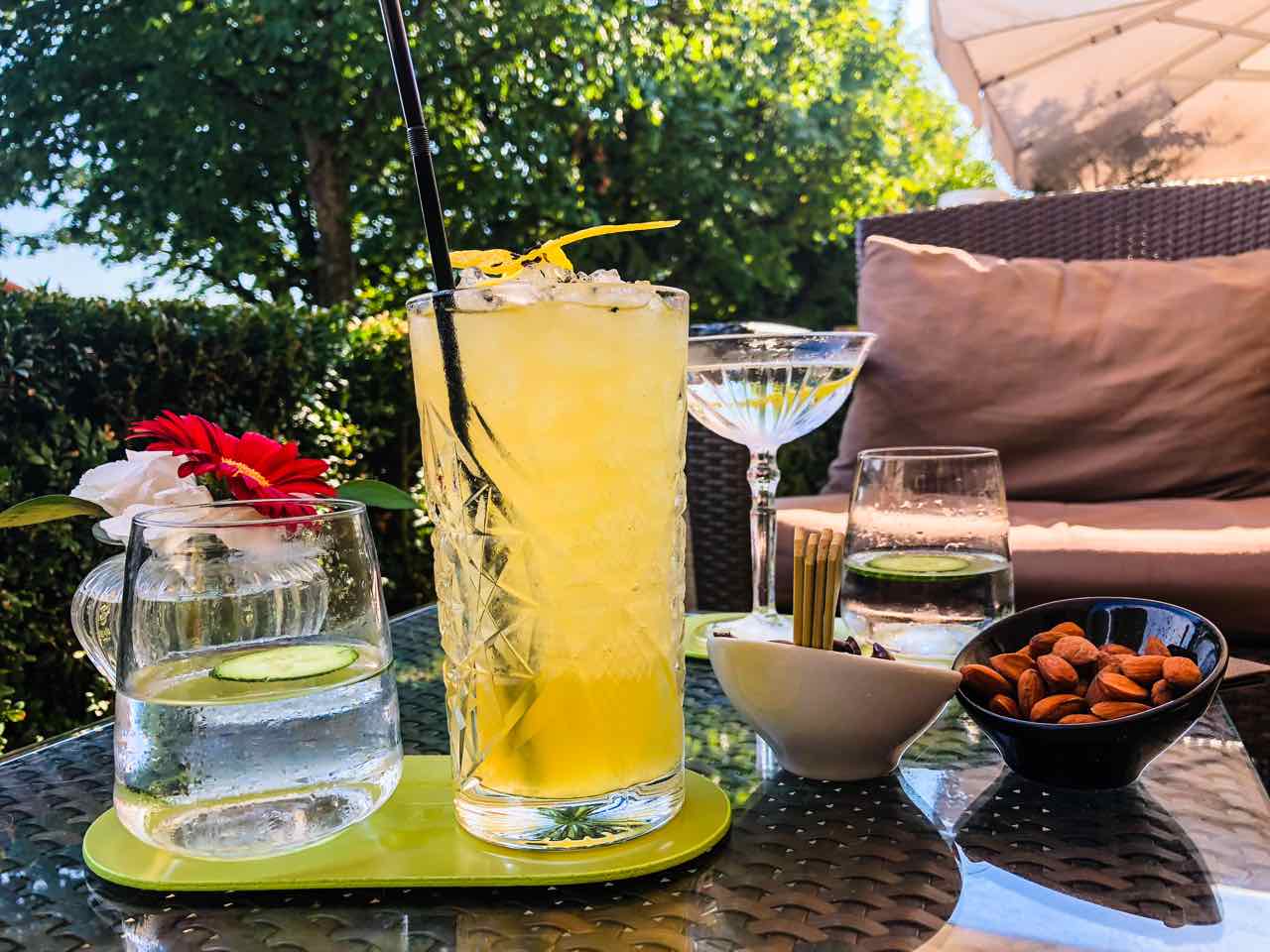 Dating to 1861, Beau-Rivage Palace is synonymous with Lausanne. As one of the best hotels in Europe, the palace has welcomed royalty, legendary musicians, stars of stage, and prominent politicians. In fact, even if you’re not staying at the hotel, make sure to wander the halls to see all the autographed photos of the rich, famous, and infamous who’ve been welcomed as guests. It’s like walking through a museum. After, head to the swanky BAR. Pick a cozy corner or sit on the terrace, but browse their extensive cocktail menu for delicious combinations. BAR is no doubt the best place to get a tasty cocktail.

After sipping your cocktail at BAR, take about a five-minute walk around the edge of Lake Geneva to climb aboard Le Montreux. As the oldest boat in Compagnie Générale de Navigation’s fleet, these steam-powered boats date to the Belle Époque. It’s truly a step back in time and a marvelous way to see Lake Geneva. 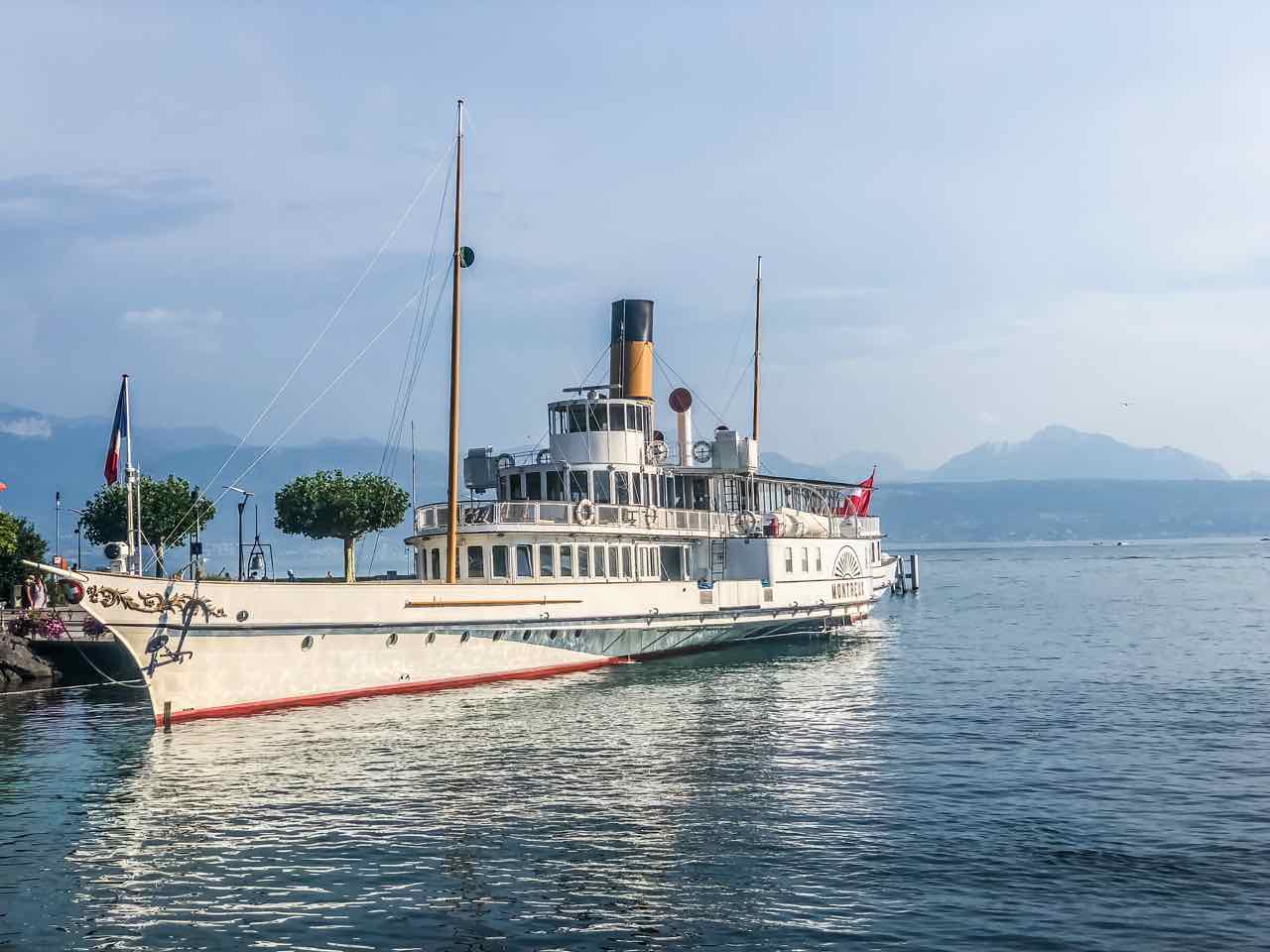 From June through September, Le Montreux also serves as a restaurant. With a blow of its horn, the boat leaves at Lausanne-Ouchy pier at 6:45 pm and returns at 10:27 pm. Not just exclusively for dinner guests, the boat is actually also transporting passengers, making five stops around Lake Geneva. 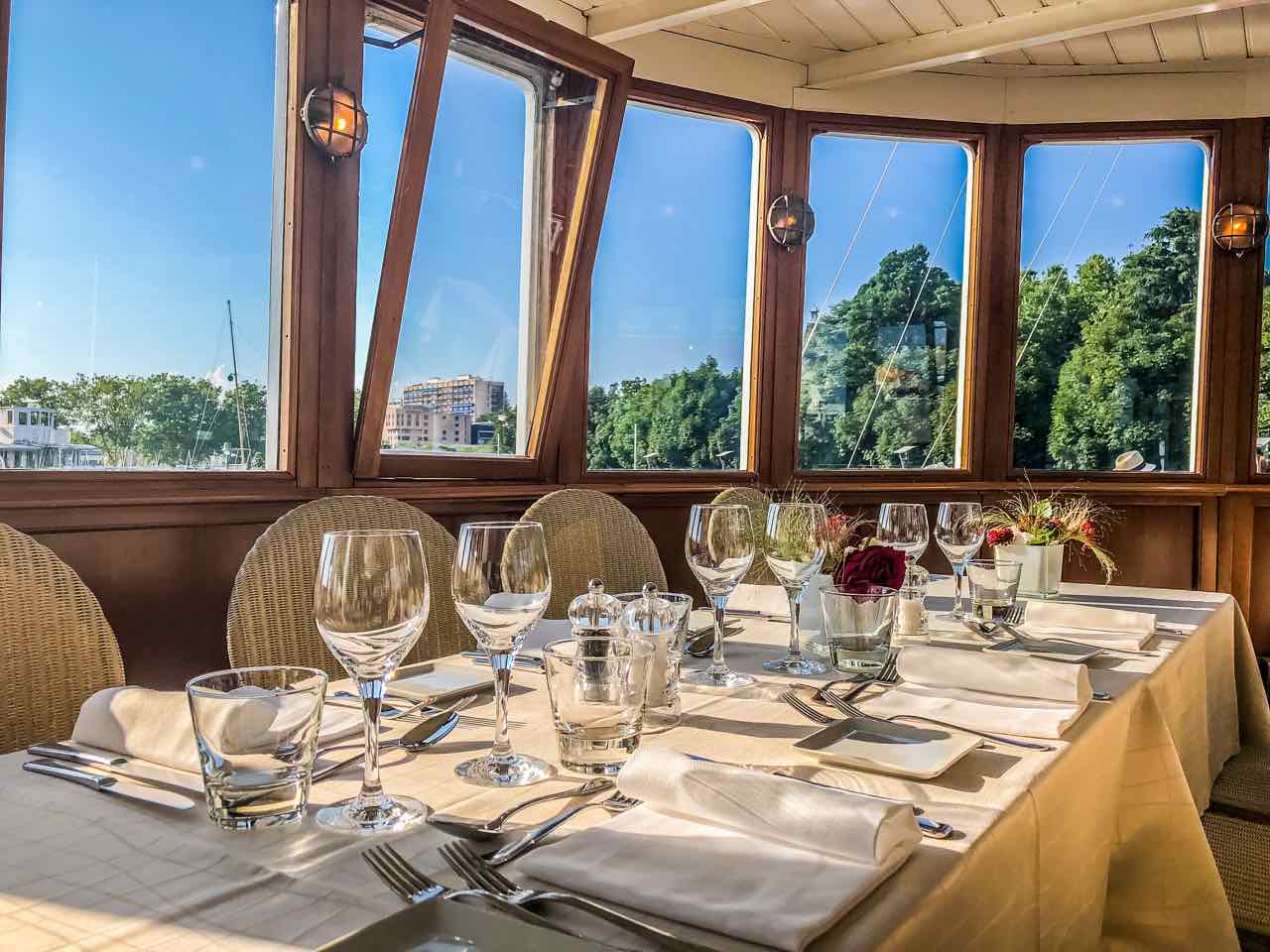 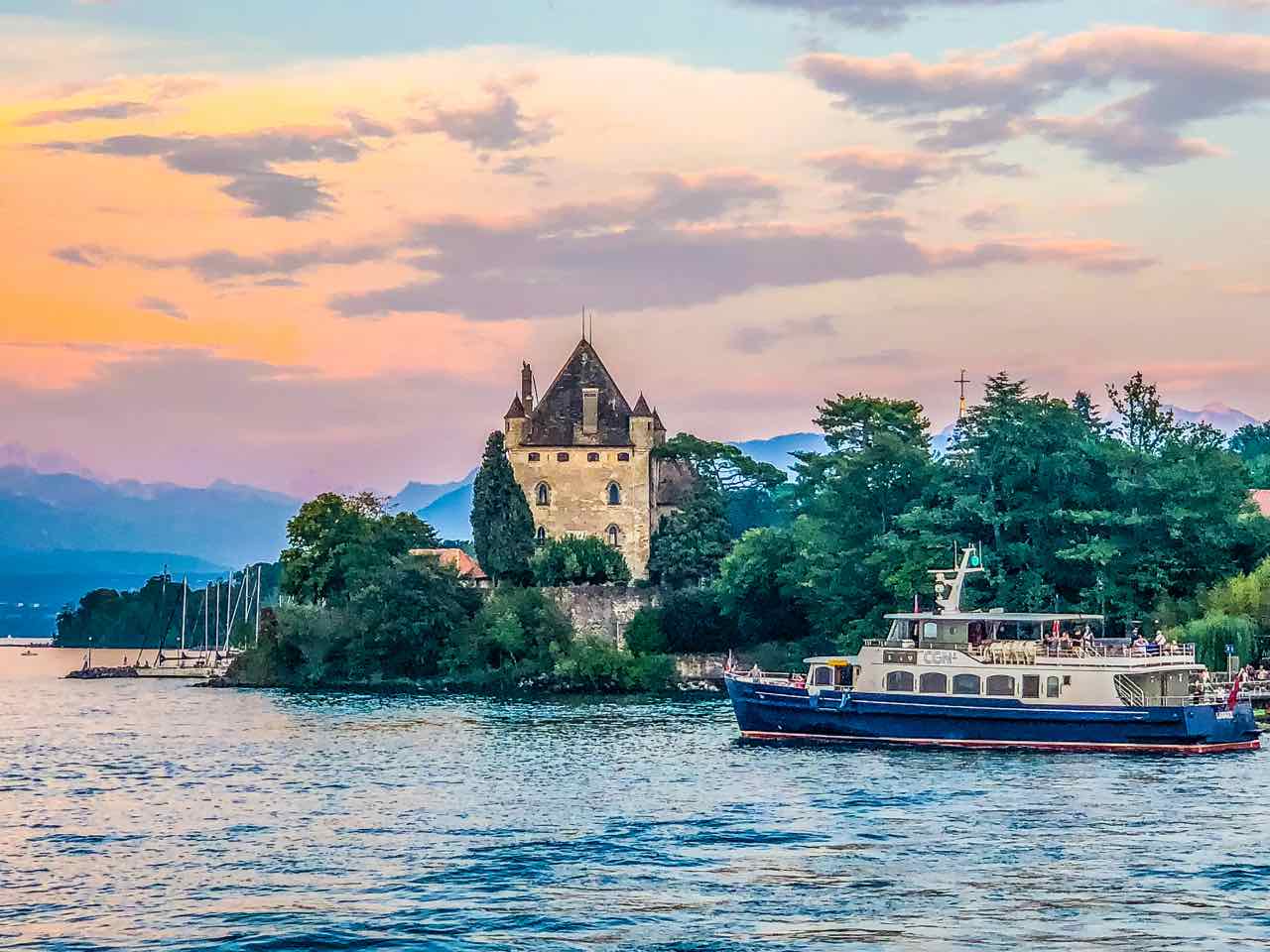 Start the cruise with an aperitif on the front of the ship. With the French Alps on one side of the lake and Swiss Alps on the other, it’s a sight to behold. Take the courses at your leisure, as the cruise is over three-hours long. Once dessert has been eaten, the sun is setting, and if you’re lucky, the sky puts on a show. Enjoy the cool breeze at the back of the boat as the evening comes to a close. Spending time on Lake Geneva is easily one of the best things to do in Lausanne. 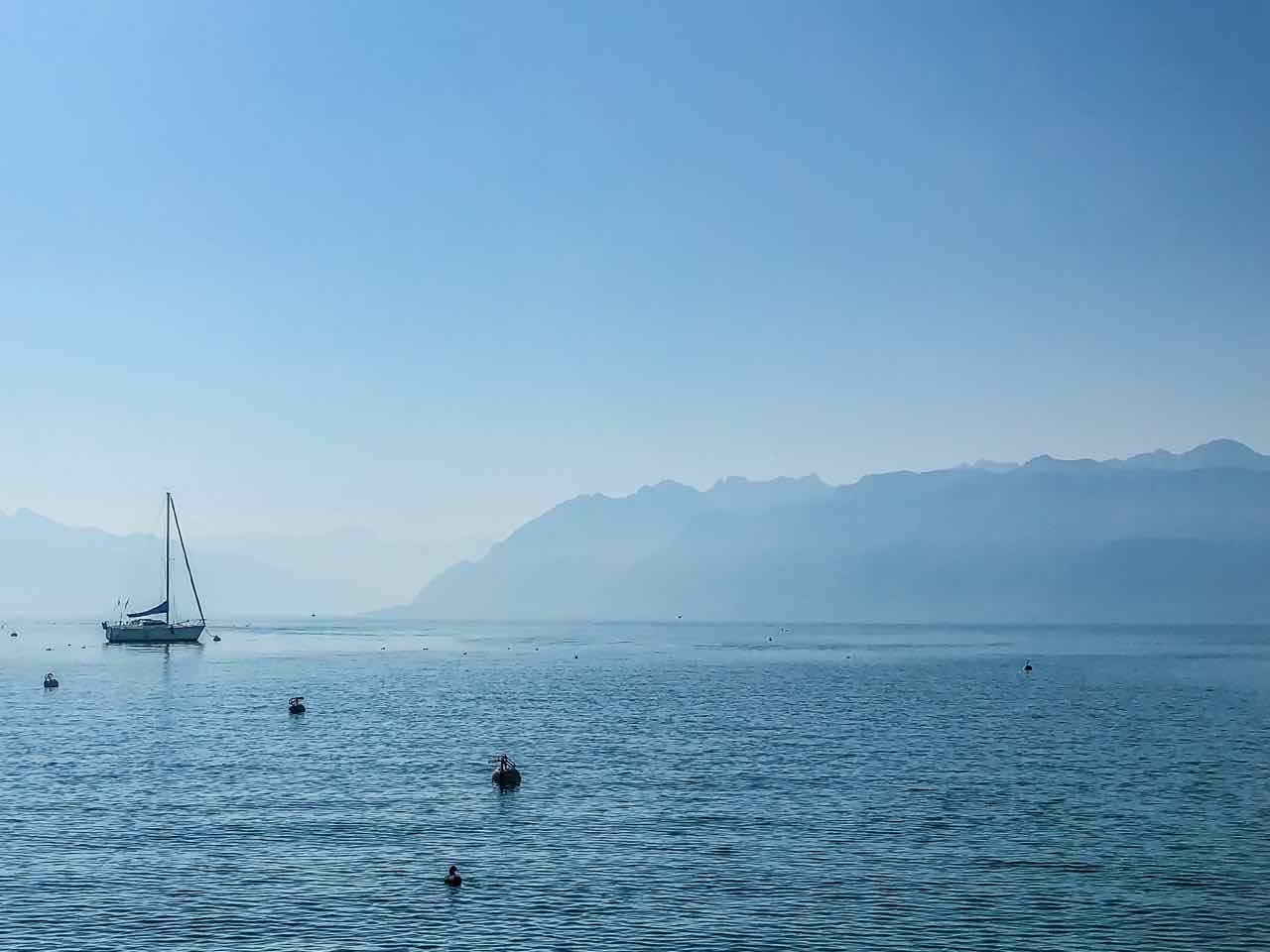 With France just across Lake Geneva, Lausanne is a unique blend of French and Swiss. With outdoor pursuits galore, no matter the season, this mid-sized city is worth the detour from Geneva. Whether you’re looking for an active or sophisticated and relaxing holiday, there’s no shortage of things to do in Lausanne. 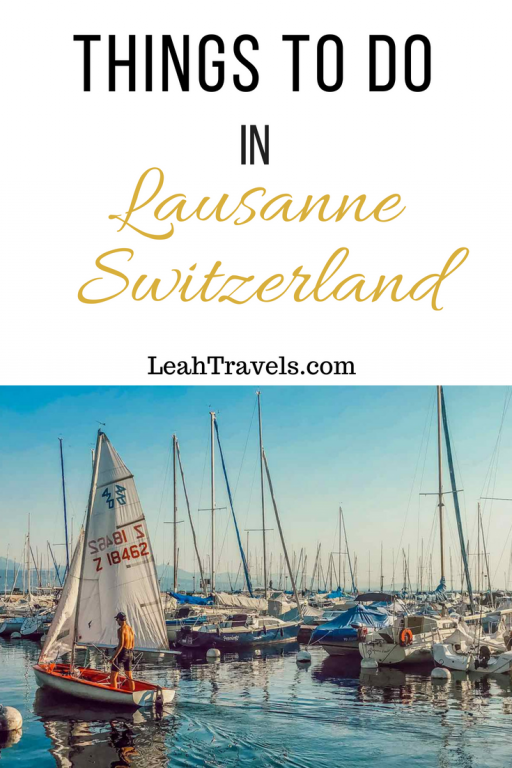