After a night sleeping like Irish royalty in the Queen Anne Suite of Dromoland Queen Anne SuiteCastle, it was only fitting that my morning began by enjoying the sport of kings. 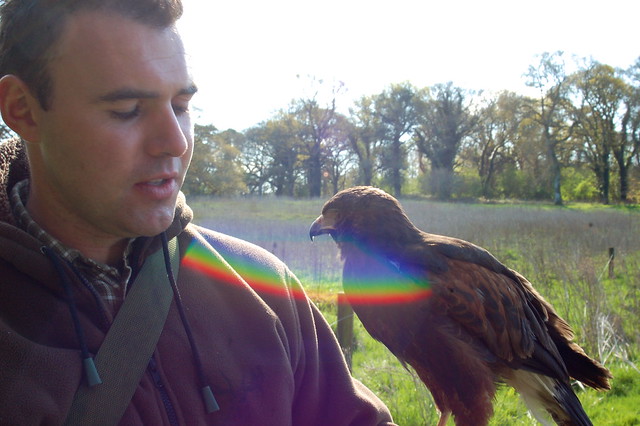 The sun was out and the air was crisp. Jim from the Dromoland School of Falconry was waiting for me in front of the castle with TJ, the Harris’ Hawk. This was definitely a “pinch me” moment. 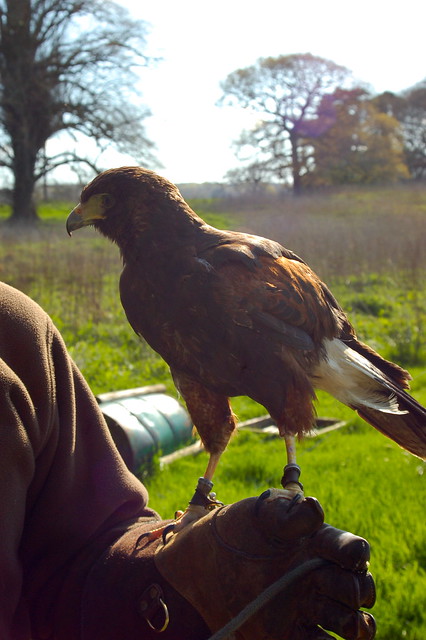 Falconry has been around for centuries, supposedly originating in Asia and then moving to Europe and the Middle East. Because of the cost of training and maintaining the birds, the sport {and hunting technique} was reserved for those of noble rank. Despite falconry’s hoity-toity past, I was getting a chance to try my hand at it. 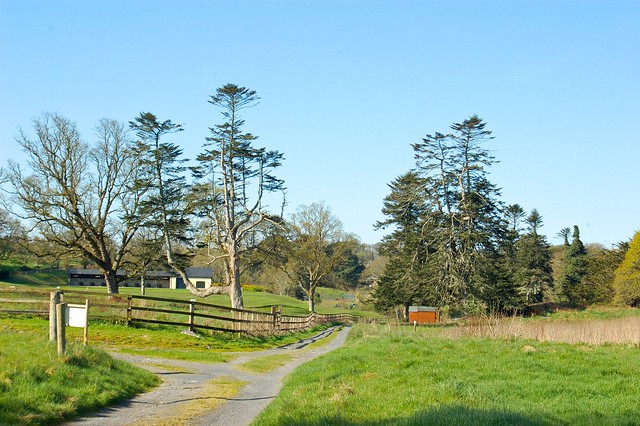 Jim, TJ, and I set off down a dirt road that cut through Dromoland’s 410-acre estate. As we walked past the fenced-in pastures, Jim explained the history of falconry and more specifically, raptors, which are used in the sport. TJ, a Harris’ Hawk, is a type of raptor, which are characterized by their amazing powers of flight and sight, curved beak, and razor-like taloned feet. 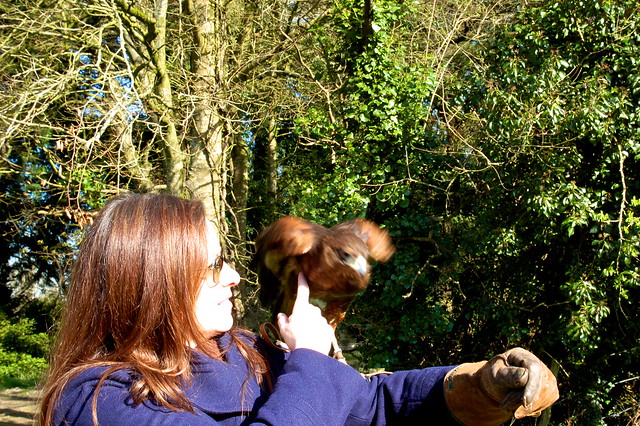 With a saddle bag at his hip, Jim led me down to a thicket of trees; TJ was so good perched on Jim’s hand during the walk. I could tell the beautiful bird was smart enough to know that some exercise and food was on its way.

I was handed a leather glove and Jim gently placed a bit of raw meat onto my fist. Without hesitation, TJ hopped from Jim’s arm to my hand. I was a bit startled. This bird had no loyalty; he was going to whoever had the food. Although only about two pounds, I was caught off-guard by the weight and strength of his grip. 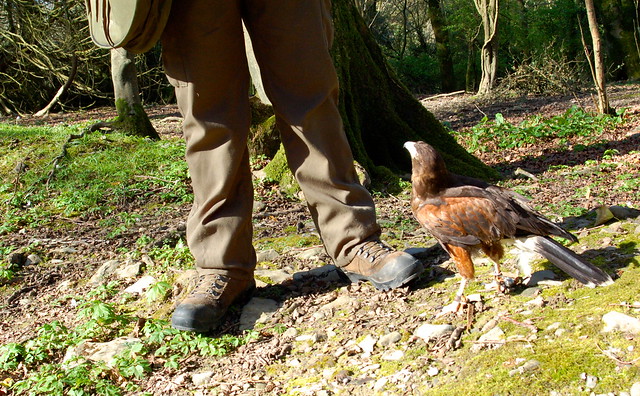 Looking down at TJ’s powerful talons, I noticed metal rings and leather straps around his ankles. Upon closer inspection, I realized that the rings had numbers on them. Jim explained that this is the way birds used for falconry are marked and identified. The leather straps are called leashes and used to keep the bird attached to its handler.

Once the meat was gone, TJ had no more use for me. He flew down to the ground and stared up at the bag containing his treats. 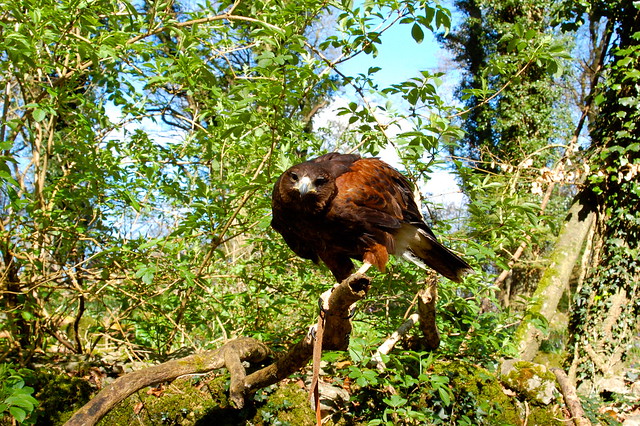 It was time to see exactly what TJ could do, so we walked a bit deeper into the woods. Jim cast TJ by moving his arm and releasing the leash. From there the bird showed me how graceful of a flyer he was. With a wing span of nearly four feet, he soared around darting in between branches before finally finding a perch high above us.

Not simply resting, TJ kept a keen eye for any kind of food. Jim explained that TJ’s diet had to be closely monitored. The bird’s gullet has a small sac called a crop in which undigested food is stored for later use. If TJ is fed too much he won’t hunt. 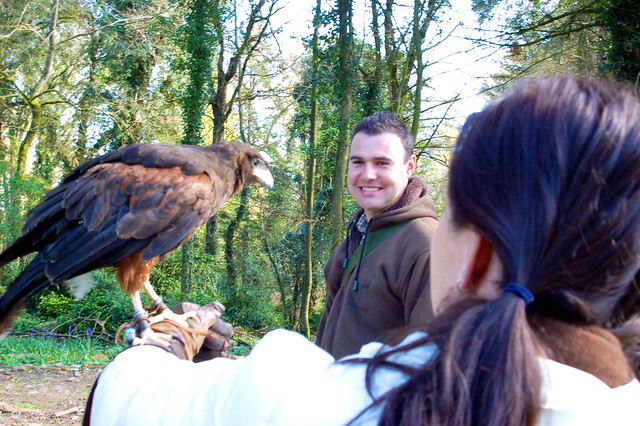 Native of the American Southwest, Jim explained that the Harris’ Hawk isn’t like other raptors who are lone hunters. In fact, there is only one other known species that is not a lone hunter. Instead, when found in nature, the Harris’ Hawk hunts in a group much like a pack of wolves. Once the prey is captured, the group of birds share the kill. As one of the fastest animals in the word, I imagined how spectacular that would be to see in real life. 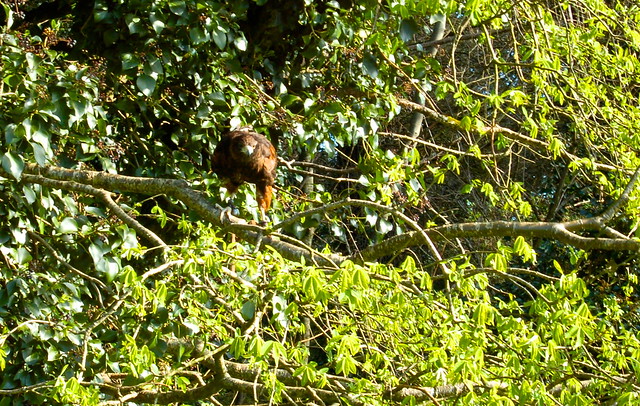 Jim placed a piece of meat onto my gloved hand again, and in a blink of an eye, TJ was barreling towards my hand with a determined look in his eyes. Supposedly, the Harris’ Hawk has vision eight times better than that of a human, and they’re also blessed with remarkable hearing. I could easily see how these would be essential in finding mice, lizards, or rabbits scurrying on the ground. 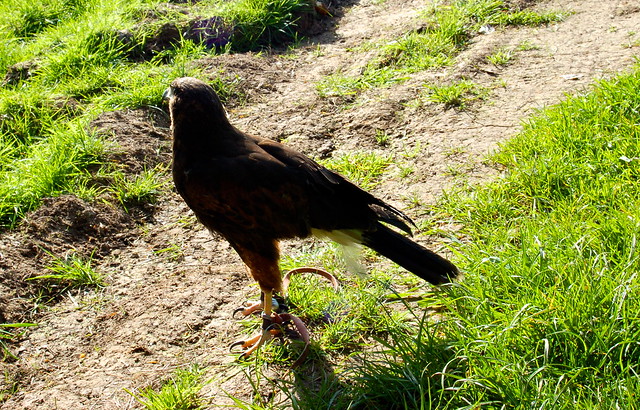 After about an hour of wandering through the forest and playing with TJ, it was time to head back to the castle. He was full of meat and had more than done his job for the day.

I’d like to think that TJ warmed up to me, that perhaps we’d created a bond of some sort. After all, he’d playfully hopped on my head and dug his talons into my scalp. I’d gently caressed his feathers as we walked through the beautiful Irish countryside. Surely I wasn’t the only one feeling the connection. 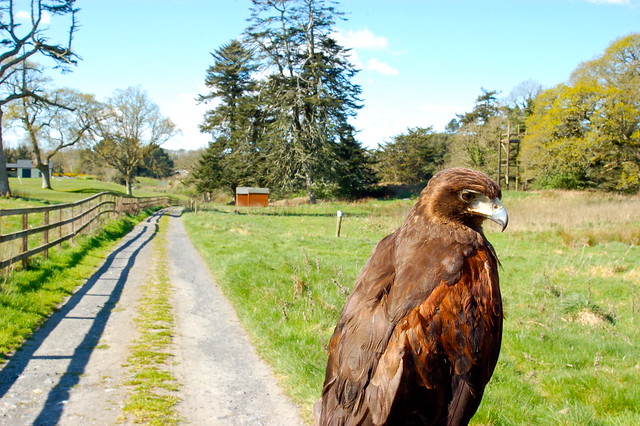 In addition to all the fascinating bits I learned about about Harris’ Hawks and TJ, I also discovered that birds are not like dogs. They don’t get attached. They are only interested in you for as long as you have food. That was such a disheartening lesson to learn for this animal lover. Because of the newly-found affection I felt for TJ, I cherished my last bit of time on the walk back to the castle. 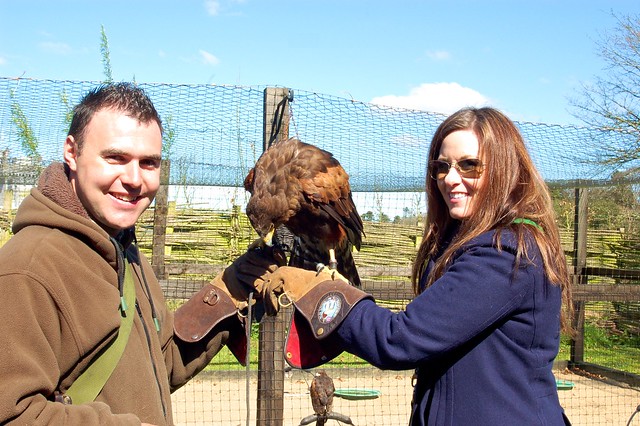 Jim showed me the pins where the rest of the birds were kept. A variety of hawks, falcons, and owls were all basking in the warm, Irish sun. With some attached to perches with jesses and others in their pens, I was introduced to additional species of raptors. Full of more knowledge than I could possibly retain, Jim gave me the run-down of all their other birds. 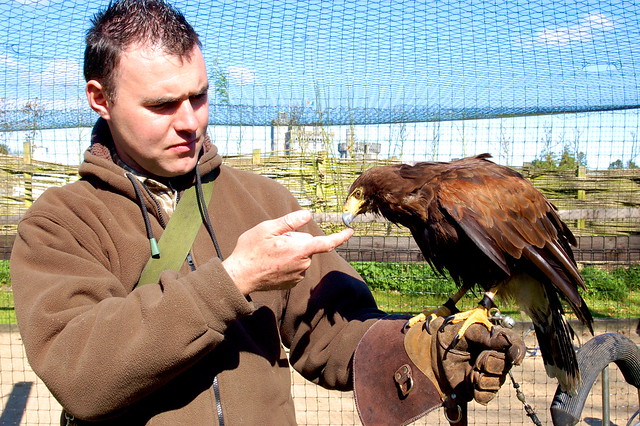 As much as I wanted to stay, check out time at Dromoland was looming. I thanked Jim for such a wonderful morning and gave my new friend one last stroke of the feathers. Even though TJ would soon forget me, I would never forget him. 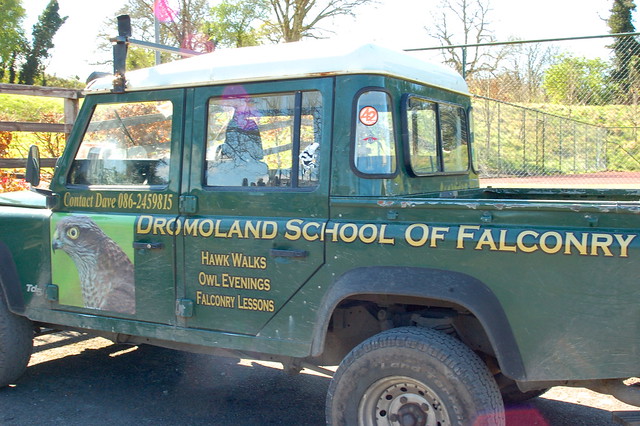 Nor would I forget my experience with the Dromoland School of Falconry.