When I booked my flight from Rio to Buenos Aries I began to salivate. No, I wasn’t thinking of the divine shopping opportunities combined with the favorable dollar versus peso exchange rate. Instead, visions of steak, empanadas, and malbec flashed through my food-obsessed mind.

One thing I always try to organize when traveling is some sort of culinary or booze experience. Not only does this give me insight into the history and culture of a place, but I also leave with a full belly, and if I’m being completely honest, often a bit inebriated. When asked for travel recommendations, no matter what city or country, I always suggest finding something unique to the region in terms of culinary and booking a guided experience. Thus, taking my own advice, I enlisted the services of Parrilla Tour–Buenos Aires. 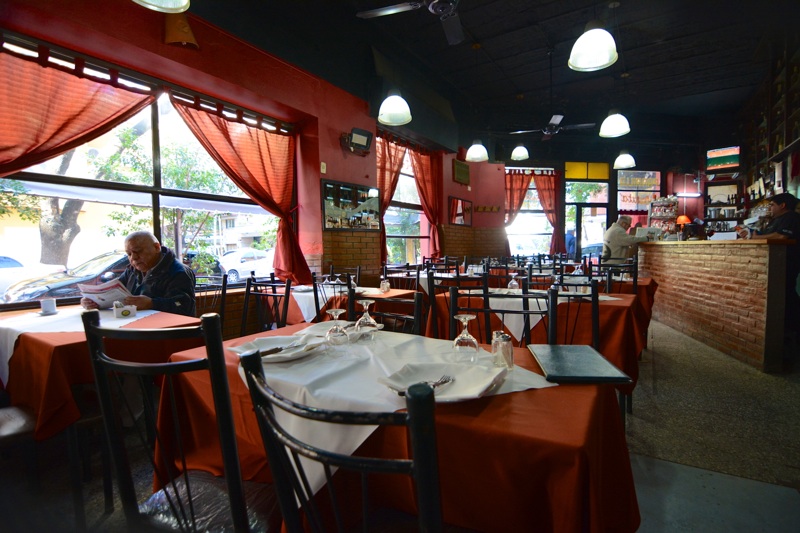 Parrillas are restaurants that serve the most traditional Argentine cuisine. I would equate them to diners in the United States. They’re informal and offer a good value. For the three-hour food fest, my guide, Sol, took me around the Las Cañitas section of Palermo. With four stops planned, pacing myself was key. 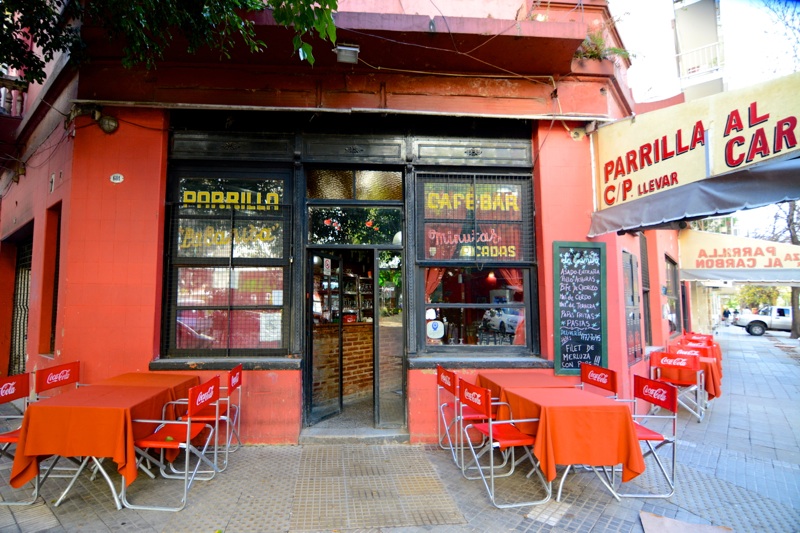 Located on a prime corner near the historical polo field was the first stop. Quaint and rustic, the parrilla seemed frozen in time. It probably looked the exact same thirty years ago. It was only noon, which is essentially breakfast time by Argentine standards, and I had the place to myself. 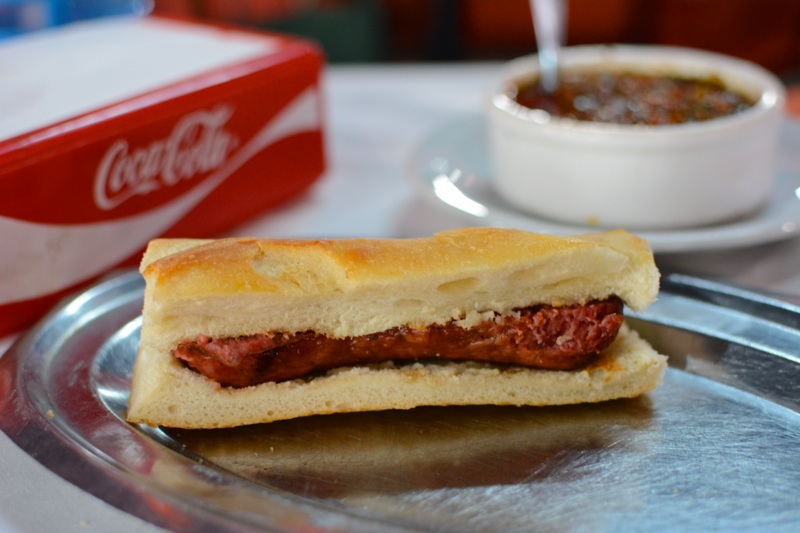 A golden baguette filled with sausage was served to whet my appetite. This typical finger food called chorizan is made from 100% pork and is a common finger food among soccer fans. 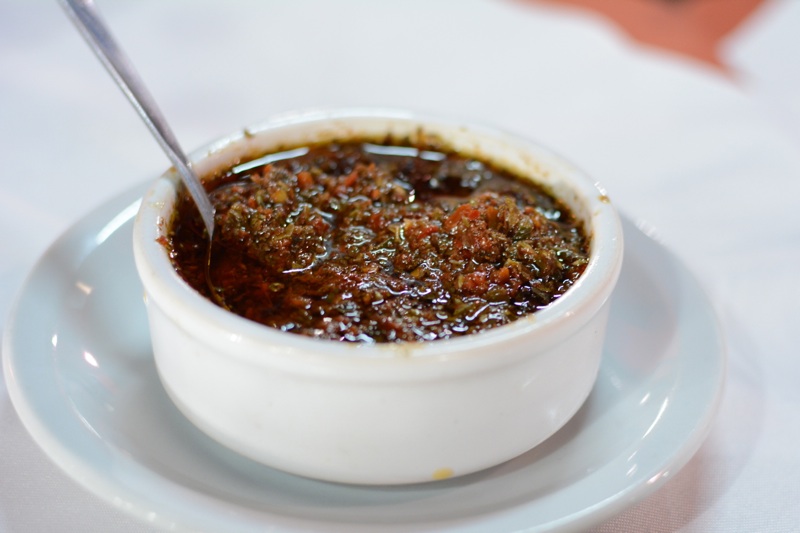 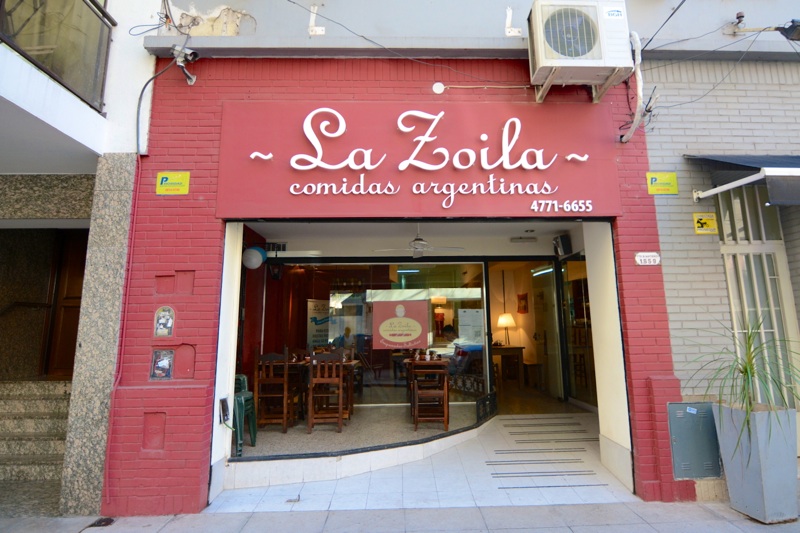 It seems as if most countries have their own version of the empanada. What make each version different is not only what is stuffed inside of them, but also how they are cooked. Spaniards brought empanadas to Argentina, and their version is traditionally baked. 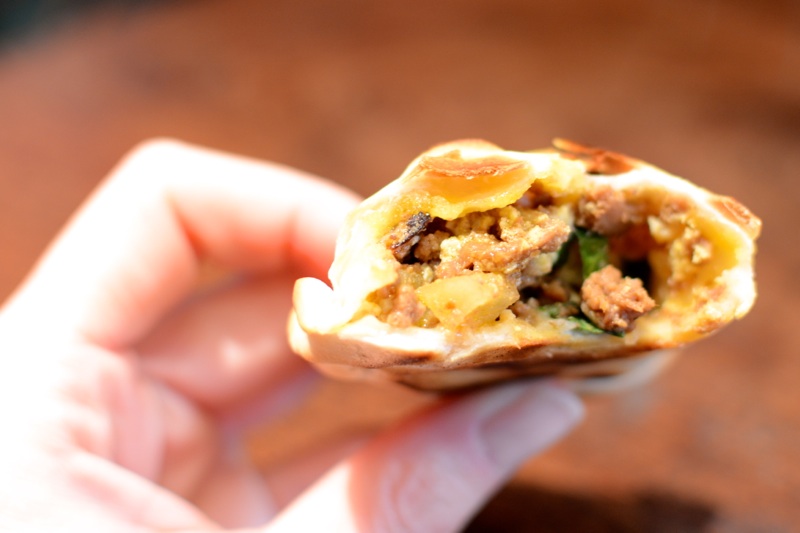 The fillings also vary throughout the country. For instance, empanadas are spicier in the north. Essentially, I’ve never met an empanada I didn’t like, and that trend continued at my second stop—La Zoila. 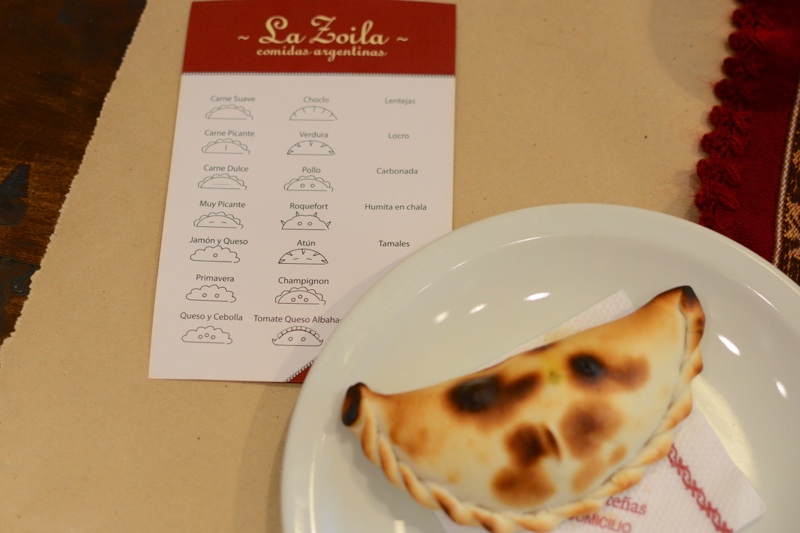 This casa de empanadas is exactly that—a house of empanadas. If you want anything else, well, you’re likely to be disappointed at La Zoila. With well over a dozen varieties, I was spoilt for choice. With so many different kinds, how do you tell them apart? The key is the design on the dough and how it is pressed together. Genius! However, this does take the fun out of biting into each one. 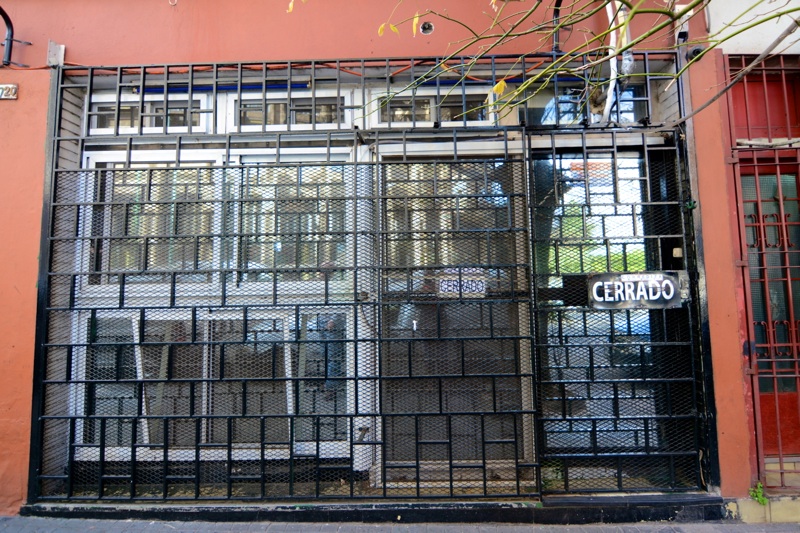 There’s something I really like about hidden places, whether that’s a speakeasy in the back of an antique shop or a restaurant tucked into a back alley. Buenos Aires has quite a few secret bars and restaurants, but the parrilla I visited for my main meal was hiding in the wide open. The simple red building with black bars covering the windows and door make it easy to miss Parri SecreTito. The most noticeable thing about the exterior is the large cerrado sign. Don’t let the closed sign fool you, however. Behind the iron door is a bustling restaurant filled with locals. 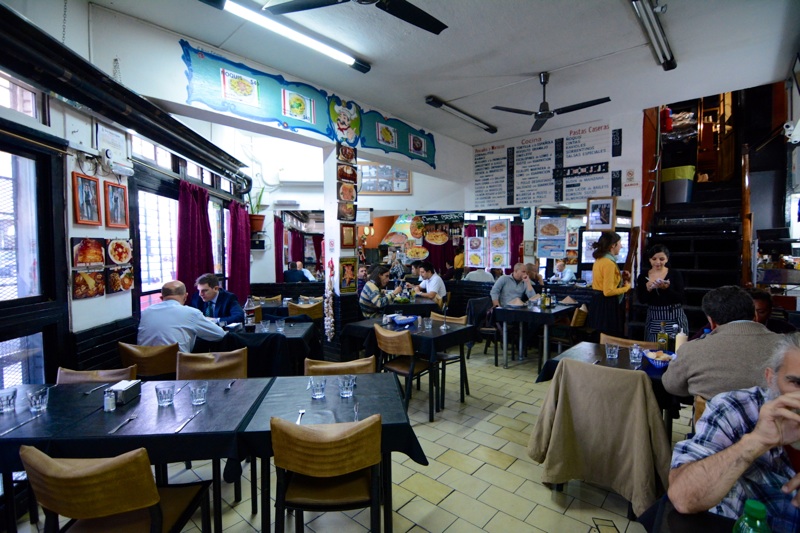 In order to keep the parrilla off the tourist trail and firmly in the hands of the neighborhood’s people, the owner, Tito, changes the name about every six months. I can’t tell you the address. Frankly, I don’t know it, but I wouldn’t share it even if I did. Sorry, but it’s that good. 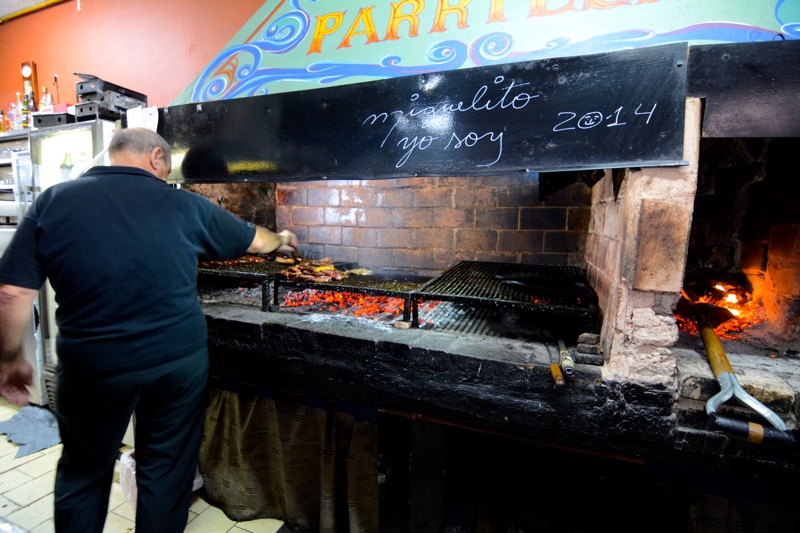 I never thought I’d find a culture that rivals the Italians in terms of massive servings of food. However, the Argentinians give them a run for their money. My lunch began with a basket of bread, arugula salad with Parmesan, and provoleta, which is melted provolone cheese topped with oregano and olive oil. 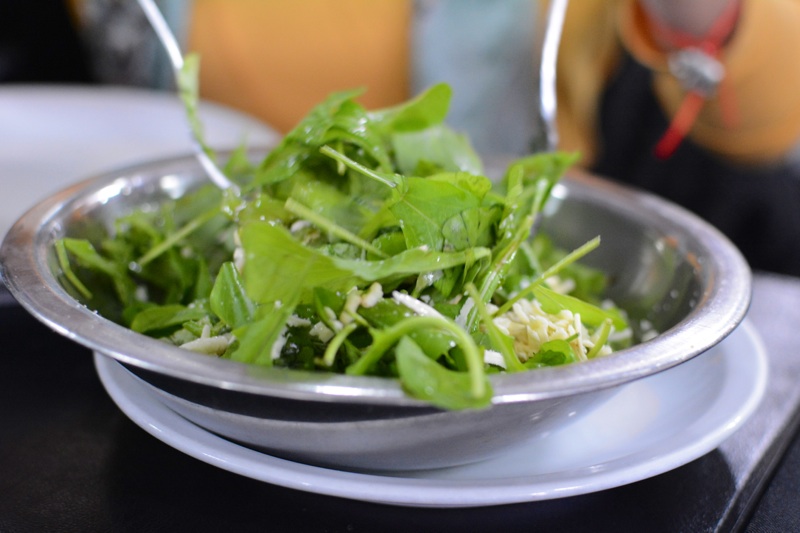 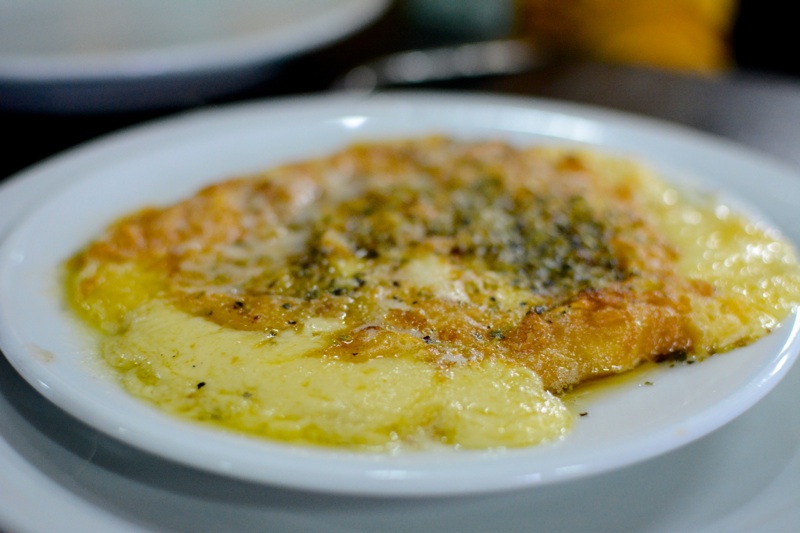 Of course, an Argentine meal wouldn’t be complete without a bottle of malbec and agua con gas. Tito’s prefers to use an old-school method of putting gas in the water, which is something I’ve never seen. 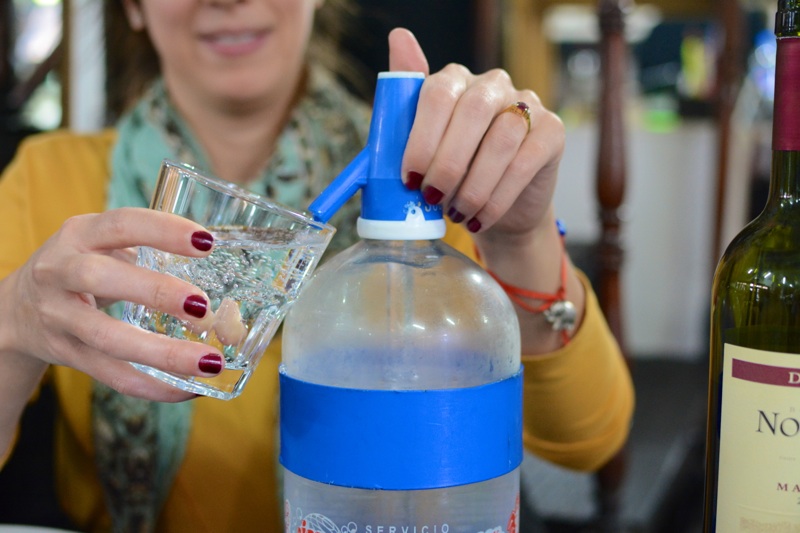 The first plate of meat {yes, there were two} was bife de chorizo, which is commonly known in the United States as sirloin steak. Delivered to the table on a simple metal plate, there was no muss and no fuss, just prime beef. 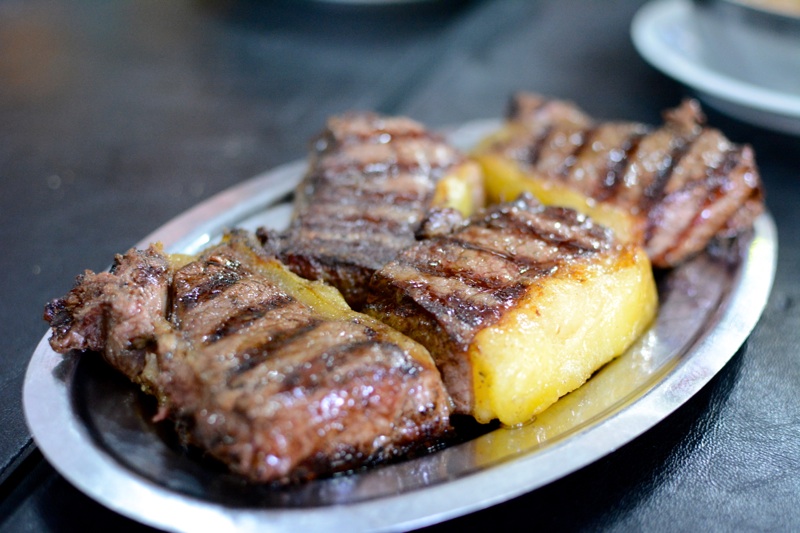 The meat was the star of the show. Perfect grill marks highlighted the rich, golden fat bordering the edges. Leaving the fat on keeps the meat moist and succulent. The flavor was different than I’m used to, but that comes from the beef being grass fed. 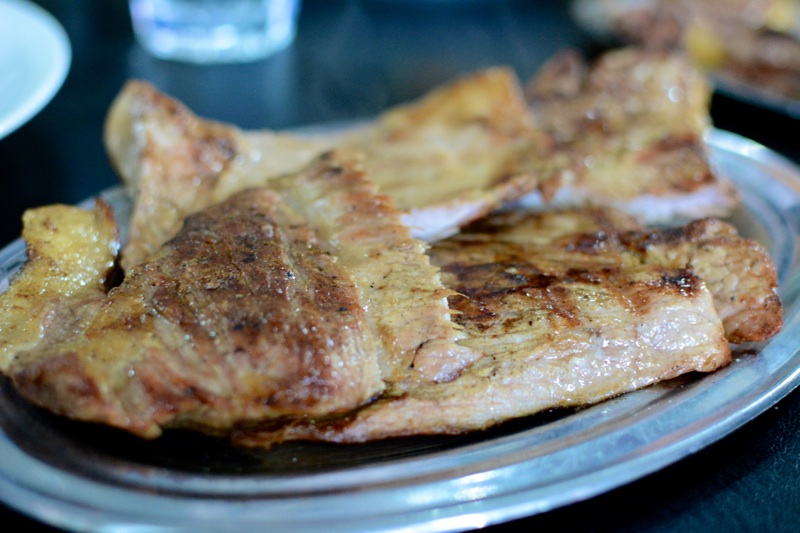 Next came the pork. Served with sliced lemons, I actually preferred this to the beef. Perhaps it’s because I’d eaten steak twice per day for the previous three days, but I just really enjoyed the flavor. Again, the meat was unpretentious and simply seasoned with salt and pepper. There was no need to dress it up with anything other than a shot of lemon juice.

Looking at the leftovers, I lamented the fact that it would be left behind. I could feast on what remained on the table for several days. 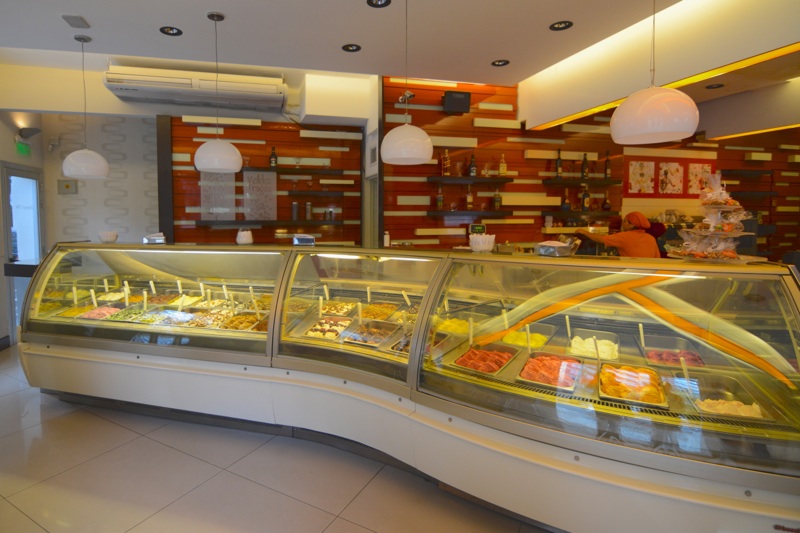 Argentinians LOVE ice cream. It seems like there is a heladeria {an ice cream shop} on every single corner. It doesn’t seem to matter the season or the temperature outside, either. Whether in a cone or a cup, locals lap up the creamy cold stuff regularly. What I learned, and it makes total sense, is that the ice cream culture comes from the Italian immigrants. So, in addition to the amazing gelato, Buenos Aires has outstanding Italian food. But I digress… 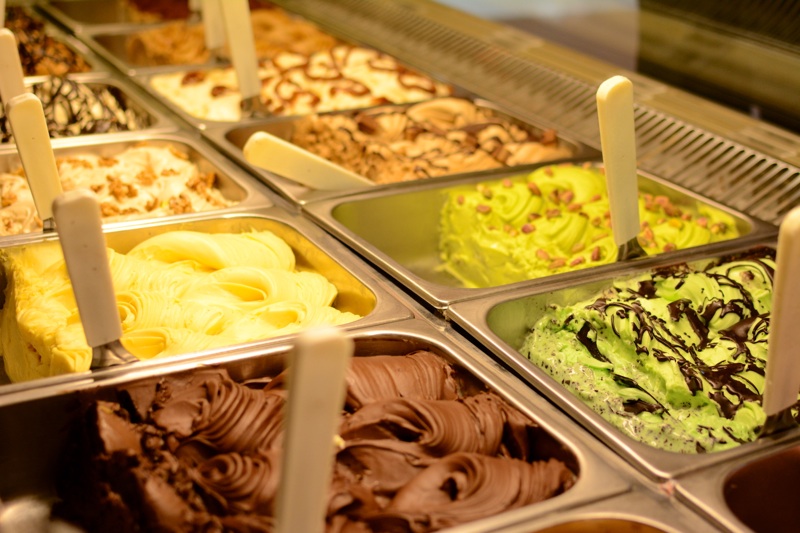 I must admit that this wasn’t my first ice cream stop in Buenos Aires. Tweets demanding I try dulce de leche gelato from Freddo prompted me to indulge prior to the tour. While it was certainly delicious, I don’t think it lived up to the hype. Nonetheless, I’m never one to turn down gelato, and I was eager to sample another heladeria. 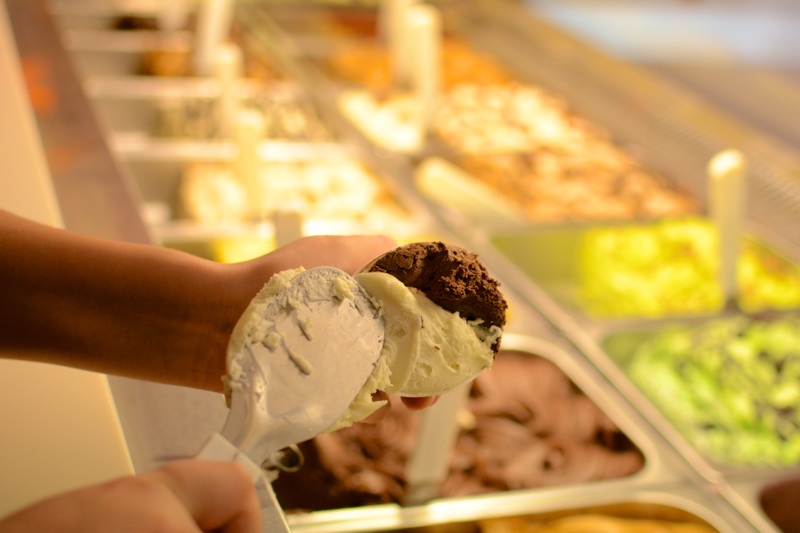 Veikko is an artisanal shop specializing in not only gelato, but also pastries and coffee. With more flavors than I could count, I sampled a few. All very tasty, I went with my traditional favorites—pistachio and Nutella. Rich, creamy, and certainly delicious, the small cup was the perfect ending to my gluttonous food tour.

I was a guest of Parrilla Tour–Buenos Aires. In no way was my opinion swayed based on the flaky empanadas, the flavorful bottle of malbec, or the chimichurri spices I was gifted at the end of the tour. As always, opinions are mine.

A World of Color: Malaysia in Gold

Surviving the Summer Travel Season in Spain with Money-Saving Tips