Often overshadowed by Austin for its funky vibe, San Antonio for its historical and tourism value, and Dallas for its cosmopolitan reputation, Houston has all of those qualities and more.

There is not another city in the South, and very few in the nation, that has the diversity Houston does. It’s reflected in cultural activities, restaurants, markets, consulates, religious buildings, and even the street signs. Couple that diversity with a world-class theater district, phenomenal museum district, variety of professional sporting events, and an endless array of festivals, and Houston can compete on the international stage of tourism.

I originally wrote this post for National Geographic Traveler‘s series, “I Heart My City” in March, but it’s yet to be published. With so many people asking me for my recommendations on Houston, I thought I’d just publish it myself. After all, that’s why I have my own Website. I can publish what I want when I want. And with the New York Times naming my hometown as its #7 place to visit in 2013, I thought I’d share what I love about the Bayou City…Space City…Houston.

The first place I take a visitor from out of town is out to eat. Houston has over 11,000 restaurants and we eat out more than any other city.

When I crave a shrimp po’ boy, I always go to Ragin Cajun.

To escape the hustle and bustle of the city I head to Old Town Spring for its nostalgic Victorian feel.

If I want to shop for antiques I go to the Heights.

For complete quiet, I can hide away at Hermann Park, located between the Museum District and the Texas Medical Center {the world’s largest medical center}. 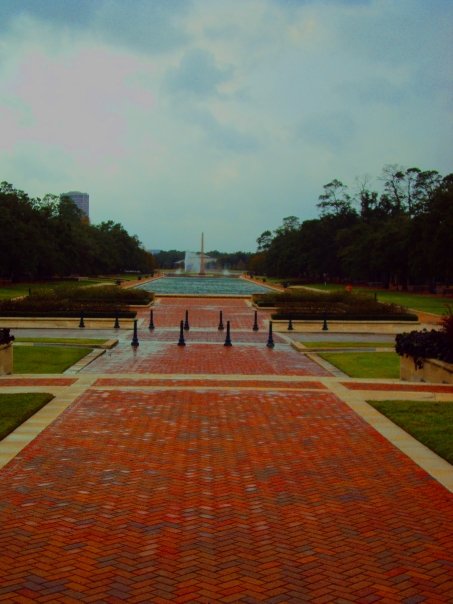 The Reflection Pool in Hermann Park

When I’m feeling cash-strapped I go to the Harwin Shopping District.

For a huge splurge I go to Neiman Marcus in the Galleria. It’s Texas-sized!

A hidden gem in my city is Rice University for its gorgeous trees and Neo-Byzantine, rose-colored brick buildings that are topped with red clay tile roofs.

Phoenicia is my one-stop shop for great foods from over 50 countries.

Locals know to skip the megaplexes and check out a movie at River Oaks Theater instead.

If you have to order one thing off the menu from Chuy’s it has to be grilled shrimp tacos, the creamy jalapeno, and boom-boom sauce.

Photo ops in my city include downtown, Reliant Park, the Medical Center, and the Galleria. The best vantage point is from the JPMorgan Chase Tower. On the 60th floor of the 75-story building is an observation deck. Some also claim to see all the way to the coast.

If my city were a celebrity it’d be Tommy Lee Jones, ruggedly Texan, yet intelligently polished and worldly.

If you come to my city, get your picture taken at Hines Waterwall Park or the Beer Can House. John Milkovisch drank over 40,000 cans of beer and then decorated his house with the flattened cans.

The most random thing about my city is that “Houston” was the first word heard from the moon on July 20, 1969.

In my city, an active day outdoors involves the Sabine to Bagby Promenade that runs along Buffalo Bayou. This pedestrian-friendly park has biking and hiking trails, canoe launches, and public artwork.

My city’s best museum is the Museum of Natural Science. The Gems and Minerals Hall is my favorite permanent exhibition. I could spend hours in there. 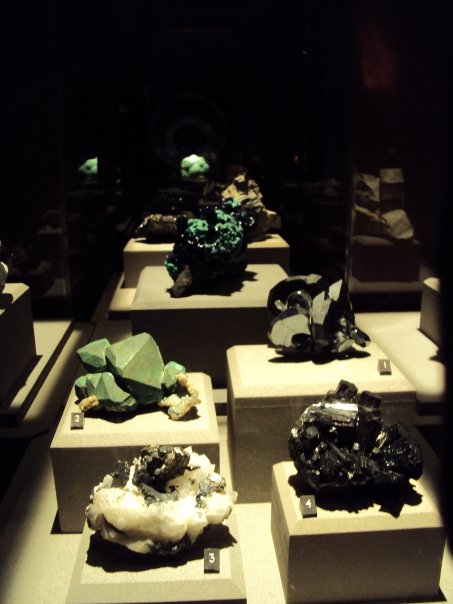 Gems and Mineral Hall at the Museum of Natural Science

For a night of dancing, go to Whiskey River. For live music, check out Cynthia Woods Mitchel Pavilion or the seventeen-block Theater District.

Katz’s Deli is the spot for late-night eats.

My favorite jogging/walking route is Memorial Park. The 1,500-acre park once was the backyard of Ima Hogg, daughter of Jim Hogg, the former governor of Texas. Yes, Ima is her real name.

You can tell a lot about my city from the number of Fortune 500 companies. Houston is second only to New York City. If it were an independent nation, Houston would rank as the world’s 30th largest economy.

You can tell if someone is from my city if talking about the high price of oil excites them. 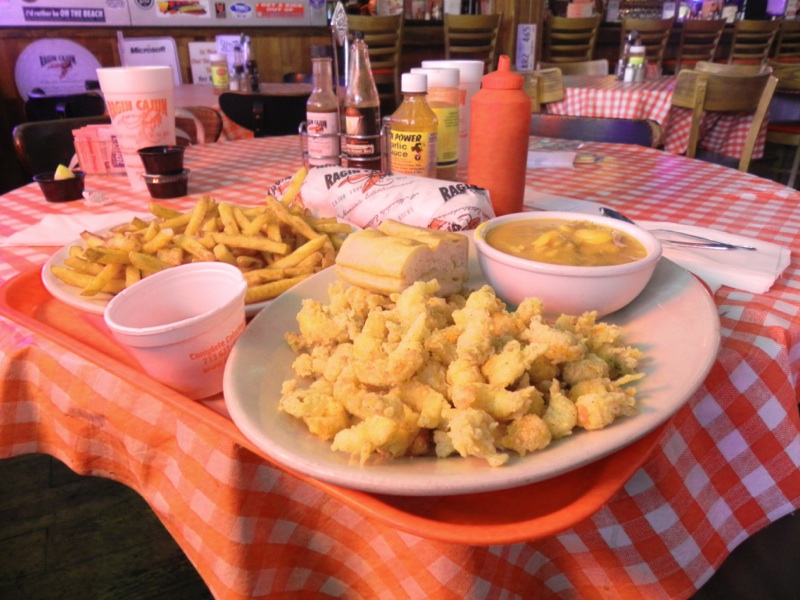 In the spring you should eat crawfish. They’re in season.

In the summer you should visit Saint Arnold’s Brewery for a tour and free tastings of Summer Pils, Weedwacker, and Lawnmower or Karbach Brewing Company.

In the fall you should tailgate and watch high school, college, and professional football games. Fall equals football in Texas.

In the winter you should ice skate at Discovery Green. 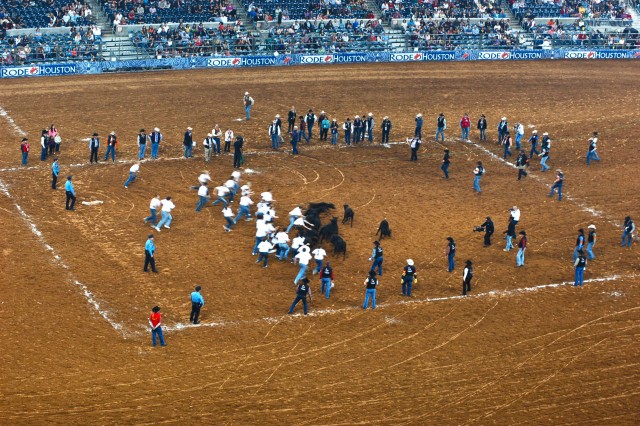 Don’t miss the Houston Livestock Show and Rodeo in March. It’s the world’s largest in both categories.

The best way to see my city is by kayak through Buffalo Bayou.

If my city were a pet it would be a friendly and loyal mixed-breed dog.

If I didn’t live in a city, I’d live (where?) in the Texas Hill Country.

Just outside my city, you can visit Galveston Island for some beach time and fun at Pleasure Pier or Schlitterbahn.

The best book about my city is the true-crime book, Blood and Money by Thomas Thompson.

When I think about my city, the song that comes to mind is “Home to Houston” by Steve Earle.

If you have kids, you won’t want to miss Kemah Boardwalk, Johnson Space Center, and Discovery Green.

To find out what’s going on at night and on the weekends, read the Houston Press. 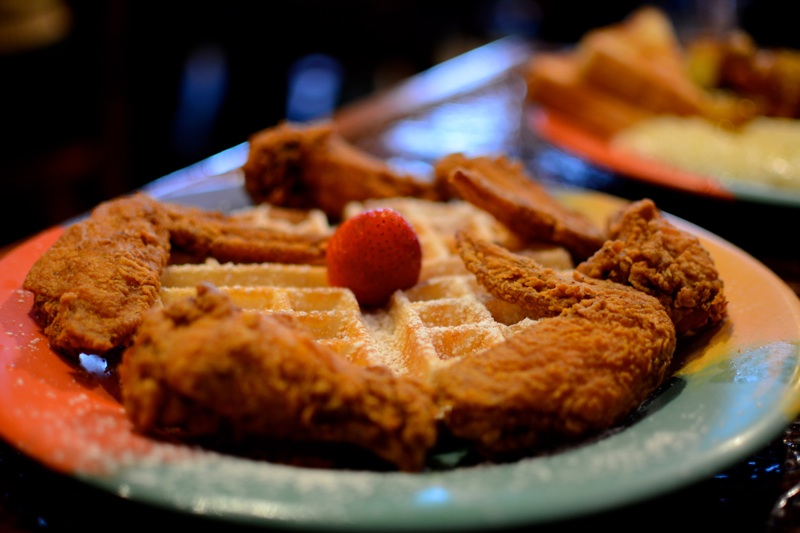 For a great breakfast joint try the Breakfast Klub for waffles and wings or the Kolache Factory for a quick bite.

The convergence of 90+ languages with a Texas twang could only happen in my city.

I’ve lived in Houston for ten years, and I believe it to be a very underrated destination. I’ll be the first to sing its praises and point out its negatives. The Bayou City has so much to offer the people that live here as well as its visitors. There’s more to the city than oil and gas, and after a decade here, I’ve still yet to discover all of its offerings.