It’s difficult for me to fathom, but I’ve resided in a city of over four million as long as I lived in a town of 1,000. Although I’ve lived in cities my entire adult life, I still associate myself with a small town; it shaped who I am. Houston isn’t home. It’s simply where my stuff is. No matter how many miles I fly or five-star hotels I sleep in, at heart, I’m still that eight-year-old girl that learned to drive on West Texas dirt roads. Yet, for some reason she’s gotten pushed aside–that is until a recent trip to Telluride.

At first glance, Telluride, the former mining town and current ski mecca in the mountains of southwest Colorado, is nothing like my flat, farming community on the South Plains of West Texas. Telluride is visually impressive and a place where the Rocky Mountains stand on their tippy toes as if trying to reach the heavens. In Telluride, the concentration of 13,000+ foot peaks is a source of pride. Locals are quick to tell you that in North America, they have more of these massive mountains than any other place. And then if you listen very closely, “But Alaska has the tallest” is begrudgingly muttered.

On the contrary, the highest point in my hometown is the white cross that looms over Burlington Avenue. I grew up with the occasional snowfall, but more often than not, it was red-dirt sand storms, tumbleweeds, and tornadoes that tormented my town. Telluride is the antithesis of where I grew up, so why then did it feel so much the same?

Throughout my four nights in the mountains I felt pangs of familiarity, but I couldn’t quite put my finger on why. My parents loved the Rockies and they passed that feeling on to me. Though, before a trip to Keystone last June, it’d been nearly 20 years since I’d visited Colorado. Throughout my childhood, I spent countless summers and spring breaks in small towns throughout the state, but never Telluride. It wasn’t until I was leaving on the road to the Montrose airport that it hit me. I knew exactly why everything felt so recognizable.

In Telluride, traditional Main Street still exists. A hand-crafted boot shop, an actual independent book store, and an olive oil shop proudly display “OPEN” signs. It’s only fitting that a town famous for its bluegrass festival has a place that sells musical instruments. There’s not a big-box store or hint of a chain in sight. Cafes and coffee shops dot both sides of the street, and when you walk into either, nobody stares at you as if you’re an outsider. Everyone is welcome in Telluride.

In Telluride, people say “good morning” and “good evening.” And when they ask how you’re doing, there’s a sincere want to know. Weather talk is not just silence filler; it’s a genuine conversation. During ski season, the mere mention of snowfall excites locals beyond measure. It’s like money is about to pour from the sky. And, in a way, it is for this resort town.

In Telluride, cars actually stop for pedestrians despite a jaywalking offense. Neighbors holler and wave at one another from across the street. Hands are extended in both greetings and departures. Hats are tipped or even removed. Smiles are broad and authentic.

In Telluride, folks take pride in their town’s history and painstakingly have tried to preserve it. The former ice house is now a French restaurant, but still retains some of its 19th century character. Rows of lovely Victorian homes, some with gingerbread touches, are painted in blue, purple, yellow, and green hues and laid out on the grid-like streets. Front porches offer a place to sip local beers and chat with passersby. Icy skis and snowboards sit in plain site outside of houses; there’s no need to keep them under lock and key. After all, you’re in Telluride. 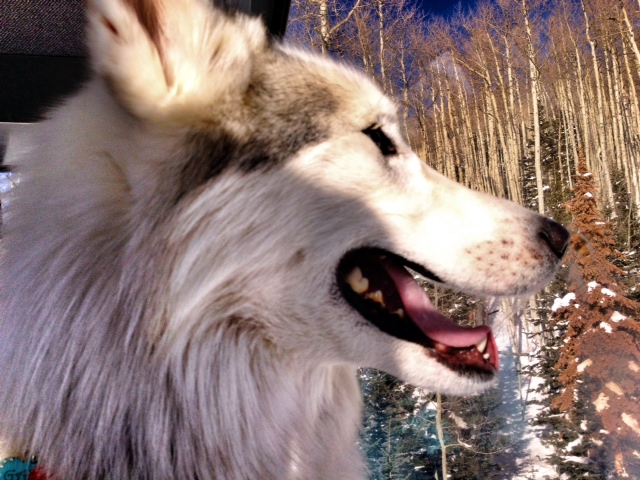 In Telluride, dogs are kings and are as fit as their owners. Dropped gloves are lovingly placed on hydrants in case the owner returns. Patagonia and North Face are just as much high fashion as Armani and Ralph Lauren, who also owns a ranch just outside of town. Giant balls of snow are sculpted by artists into garden gnomes, sharks, and frogs, then serve as temporary art in town.

In Telluride, visitors often turn into permanent residents. The place is just that good. People from all over the country converge on this tiny town perhaps with nothing more in common than their adoration for Telluride. There’s enough room for everyone in this beautiful boat. In Telluride, a hometown boy done good is a superstar and glad-handed everywhere he goes. In turn, he knows the names of each person’s hand he shakes. He could have gone anywhere, but instead chose to stay in his beloved hometown.

In Telluride, a free gondola whisks you to another equally wonderful world in a matter of minutes. As you ascend the mountain in the daytime, the colorful houses and roads begin to blur together. And at night, street and porch lights cast a warm, golden glow across the town. Once the gondola reaches its pinnacle, it begins its descent into Mountain Village, the place that makes Telluride tick. As a world-class ski resort, Telluride’s Mountain Village still retains the friendly, small-town feel of its sister, despite the mega multi-million dollar second and third homes that dot the landscape.

From someone on the outside looking in, Telluride is easily seen as perfect. With it’s incredible vistas and sheer natural beauty, it’s hard not to look at the town through rose-colored glasses. There’s so much to this place that stars on tourism’s stage, but you’re not going to find it in a guide book, a Website, or a trail map. Instead, it can be found by chatting on the gondola to Mountain Village, sipping coffee at a Main Street diner, and watching the parade of dogs walking their owners.

The Telluride trip prompted me to look back on my small-town youth with loving sentimentality. It certainly was an emotion I wasn’t prepared for. As an avid traveler, I often feel sadness, almost a depression, when leaving locales that I’ve grown to love. But what set Telluride apart from New Zealand, Paris, Switzerland, and all the other places that I’ve dreaded leaving, is that in departing Telluride, I felt like I was leaving home.

I know that Telluride isn’t perfect. No place is. But for me, I was able to find five days of perfection there.

I was an invited guest of Telluride Ski Resort, but in no way was I swayed to write a positive review by their pure mountain air, picturesque landscapes, or over-the-top friendly nature. As always, the opinions are mine.

The Best Ice Cream in the Country