It’s not what you know, it’s who you know. And I happen to know somebody who knows somebody, which came in really handy during my stop in Waterford.

Ireland expert, Ginger of Time Travel Tours, worked her magic and hooked Karlin and me up with a VIP tour of Waterford’s factory, which included cutting our own crystal. This was one of the things on our Ireland itinerary that I was most looking forward to. So you can only imagine that I sprang out of bed with the sun. I was rewarded with the most beautiful view of the sunrise over the quay. The water was smooth as glass and there was nobody on the streets. It calmed my excitement for about 32.7 seconds. 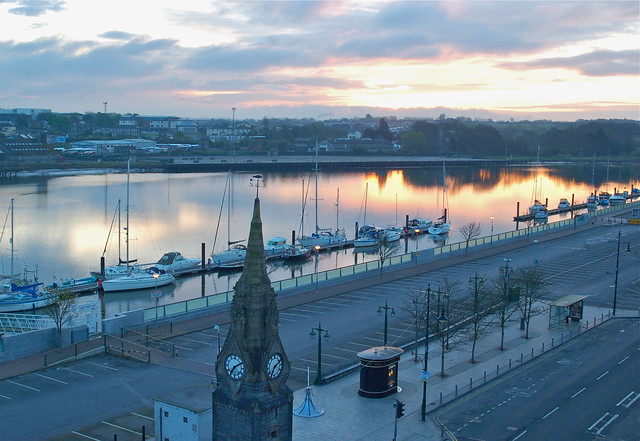 With a 9:00 am tour time and breakfast waiting for us downstairs in the Granville Hotel’s restaurant, we had to hustle. I grabbed my essentials and retreated to the bathroom while Karlin got a little more sleep. I plunged my hand into my toiletries bag and let out a shriek. I looked at my hand and it was covered in blood! “Damn it! I better be able to cut crystal!” was the first thing that ran through my head (and out of my mouth). I plunged my finger under the faucet, but the blood kept gushing out. This was disastrous. Luckily Karlin had a supply of bandages and was able to wrap me up. Note to self:  Watch what pocket you put your razor in.

Even after that less-than-auspicious start to my morning, I was still eagerly anticipating the tour. Karlin and I walked the half mile through the city center to the Waterford factory. Even with the drizzle and my pounding left middle finger, my spirits weren’t dampened. We arrived to the Waterford Visitor Centre a little late for our 9:00 am tour time, but it didn’t matter; we had a dedicated guide.

Emma greeted us with a smile and quickly ushered us off to begin the tour. We left the retail space and walked to a nearby building. As Emma unlocked the door, she explained to us that we could take as long as we wanted, a statement she might regret later. Through the locked door, there was a room with displays showcasing the evolution of Waterford as a company and its designs.  Emma began telling us about the history of the company. 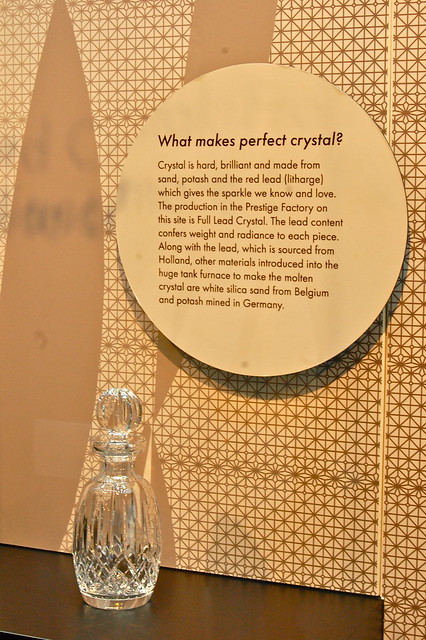 With so many beautiful things, my eyes couldn’t decided what to look at. They finally landed on a giant crystal grandfather clock that stood in the corner. Emma told us of the Penrose brothers, George and William, and how they petitioned Parliament in 1783 for aid in creating what would eventually become the House of Waterford Crystal. She explained how the company exchanged hands throughout the years and eventually stopped production in 1896. 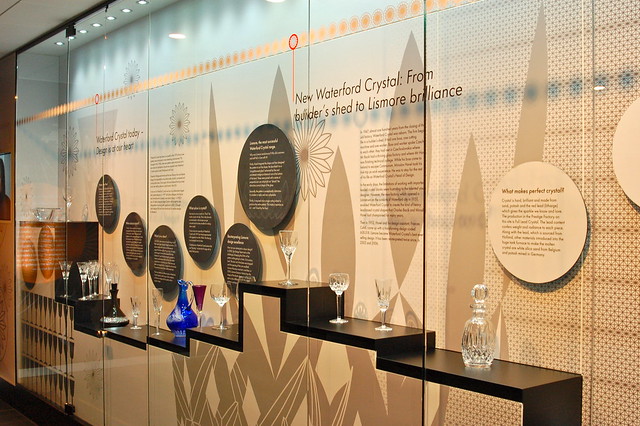 Emma went on to tell us that it wasn’t until 1947 that new life was breathed into Waterford by Charles Bacik, a native of Czechoslovakia. Although Europe was in ruins after World War II, Bacik went to Ireland to set up a crystal factory. He recruited about 30 blowers and cutters from across Europe to join him in Ireland. Traditional Waterford patterns were used, as well as new ones including the Lismore, which is Waterford’s most popular pattern. 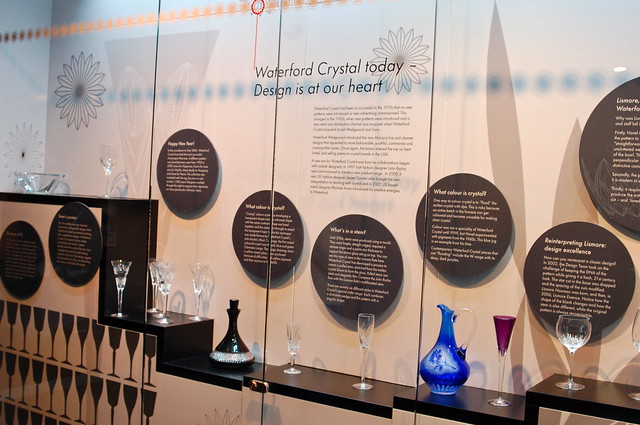 In the 1950s, Waterford became profitable and during the ’60s and ’70s, the company’s demand outweighed its supply, which is always a great problem to have. In the late ’80s and early ’90s, Waterford Crystal suffered a financial crisis. Money from investors was pumped in, new products were introduced, and celebrity designers were enlisted to stabilize the company. The strategy worked and ceramic companies, Rosenthal and All Clad, were purchased. Then in 2009, Waterford Crystal, under financial duress, was acquired by KPS Capital, a US-based company. 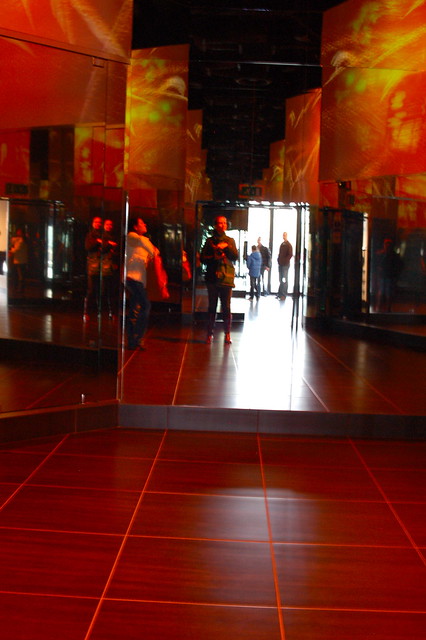 After a few questions, Emma moved us along to the next room. Giant sliding doors magically opened, and we walked into a dark, mirrored room with giant screens on the ceilings. A short video whisked us through the history of the Waterford brand. Shots of championship trophies, the Times Square New Years Eve Millennium Ball, and other high-profile Waterford-created items flashed before us while booming sound reminded us of the company’s prominence. Once finished, Emma led us into the mould room. 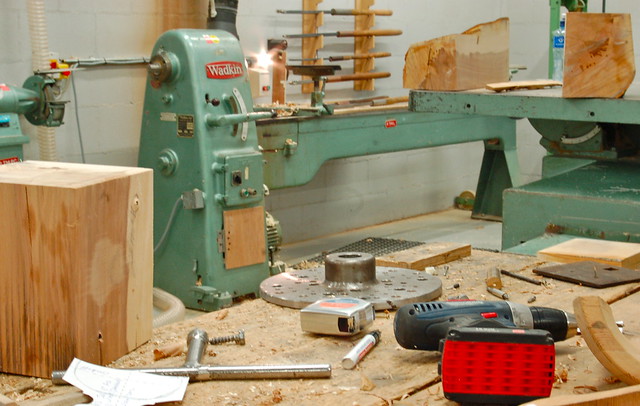 The smell of wood immediately hit me. Saws were buzzing and battery-powered screwdrivers were humming. The mould room is the first step in the creation of a Waterford design. Emma explained that we were in the prestige factory, and that the majority of their manufacturing consists of awards and commemorative pieces. Although, they do create a limited number of retail items, too. 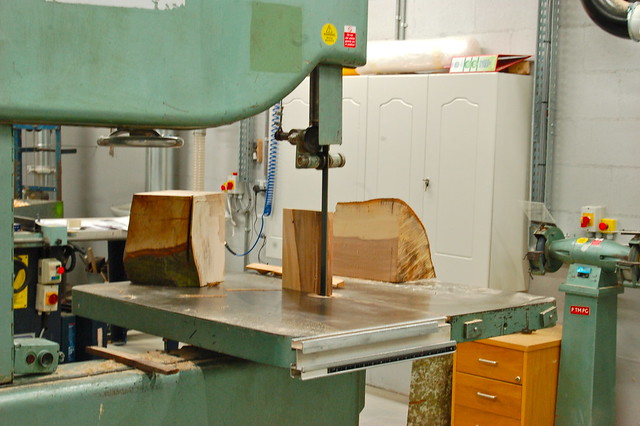 Emma told us that mould making is an ancient craft and Waterford Crystal is one of the few companies that still uses it in their process.  Master Blowers use these moulds to shape the molten crystal. 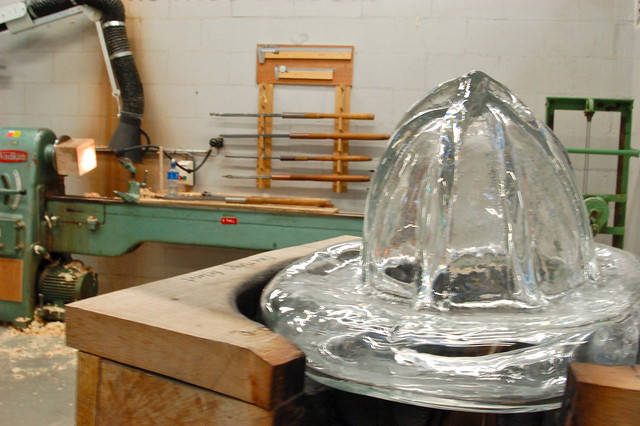 Made from beech and pear wood for their high tolerance to heat and smoothness, the moulds are only usable for seven to ten days before they become too burned. Emma explained that in the case of prestige items, the moulds may only be used twice a year and thus are kept for future use. Along the walkway were stacks of moulds, including the one I spotted for Justin Timberlake’s charity golf tournament trophy. 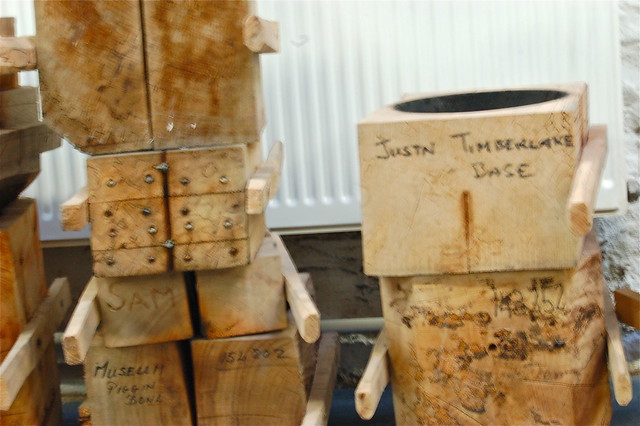 Having our fill of the mould room, it was time to move along to the blowing department. I could already feel the temperature rising.