Having seen the Mould Room and Blowing Department, it was time to move on to the step that I was most excited about.

Despite my throbbing finger, I was prepared to create my masterpiece. I would soldier though the pain. Ginger, of Time Travel Tours, told me a month previously that she’d reserved a Waterford VIP tour and arranged for Karlin and me to cut our own crystal. Since then I couldn’t think of much else; it was what excited me most about the trip. My excitement was temporarily delayed by our tour guide, Emma, as she showed us the Hand Marking department first. This was not a step I’d known about. 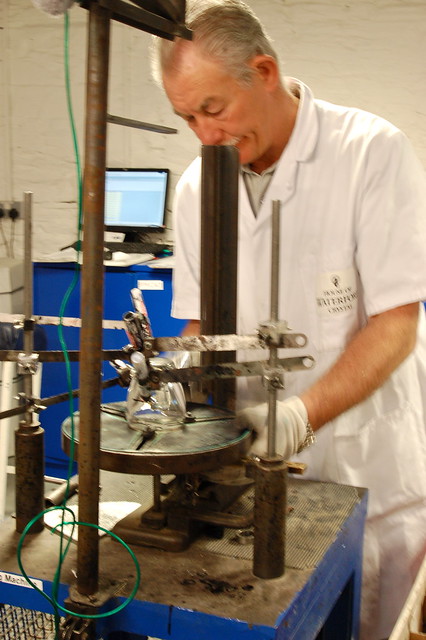 I’m not sure if I thought the cutters just eyeballed the designs or what. After seeing the machines with black markers attached, the process made much more sense. With the crystal held steadily in place, the machine turned the piece and a temporary geometric grid was made. 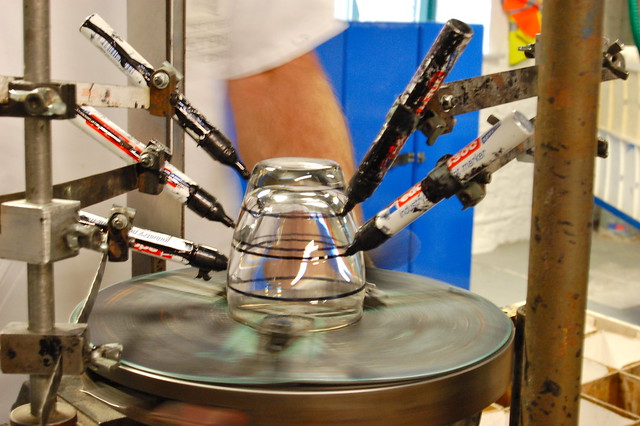 The Master Cutter then uses the grid as a guide, even though he has the pattern memorized through his years of training and experience. Karlin and I would later find out how important those vertical and horizontal lines were. As Emma led us to the Cutting Department, we passed by a table filled with beautiful marked and unmarked pieces. She pointed to a giant vase with “London 2012” emblazoned on it. Emma told us that these were for the Summer Olympics. I couldn’t resist scooping it off the table.The vase was deceptively heavy, so much so that I was afraid I’d drop it. I gingerly laid it back down and we moved on. 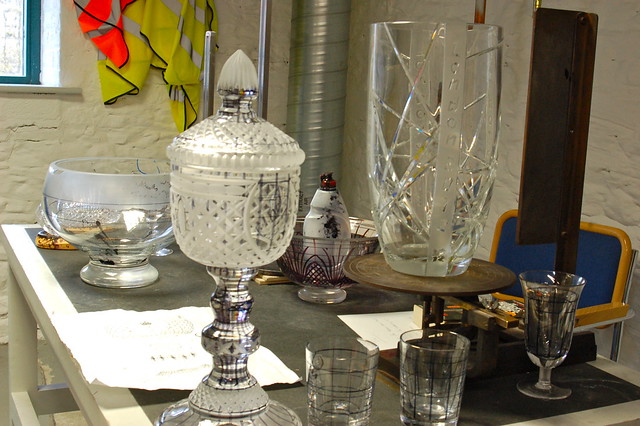 Finally, the moment I’d been anticipating for a month; I’d made it to the Cutting Department. Machines were scattered about the open, long room. Each Master Cutter had their own workstation equipped with a diamond-tipped wheel and spotlight. We were greeted by a grey-headed, smiling man. In his lovely Irish accent, he introduced himself as TJ. As an experienced Master Cutter, TJ would attempt to teach Karlin and me the art of crystal cutting. This would be no easy task. 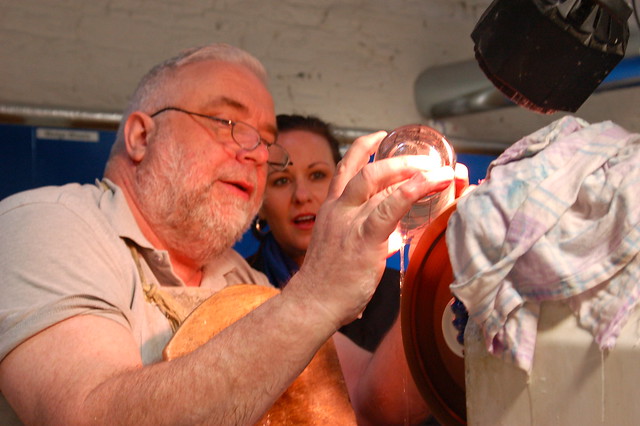 Emma appeared with two crystal glasses already marked with black grids. My eyes lit up. I could hardly pay attention as TJ explained the two Waterford cuts. He demonstrated the proper stance, placed his elbows on the padded arm rests, and started the machine. Water dripped as the wheel turned. With precise pressure, TJ placed the glass against the diamond-tipped wheel. He showed us how to use the grid to create one of the signature Waterford patterns. It didn’t look too hard, and I was eager to try my hand. 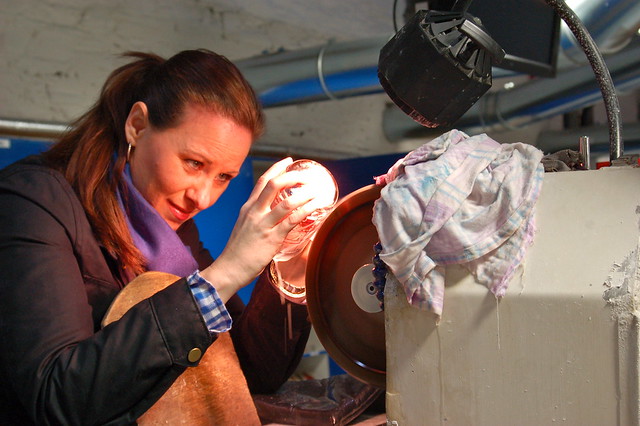 I assumed the position. With a wide stance and my elbows locked at a 45-degree angle, I pressed the glass to the wheel. At first it didn’t even leave a scratch; I hadn’t pressed hard enough. 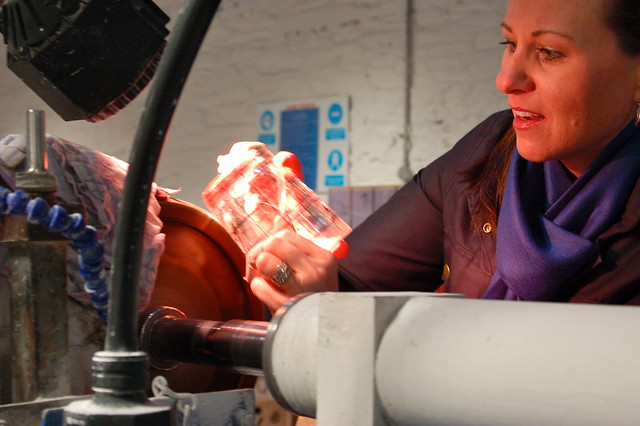 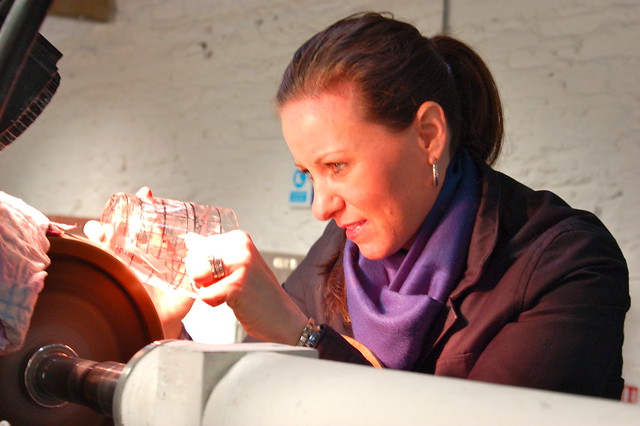 I rocked the crystal back and forth trying to get the right cut. I pressed harder. Eventually I could see a mark. Frustrated with my results, TJ showed me once again. It looked so easy when he did it. 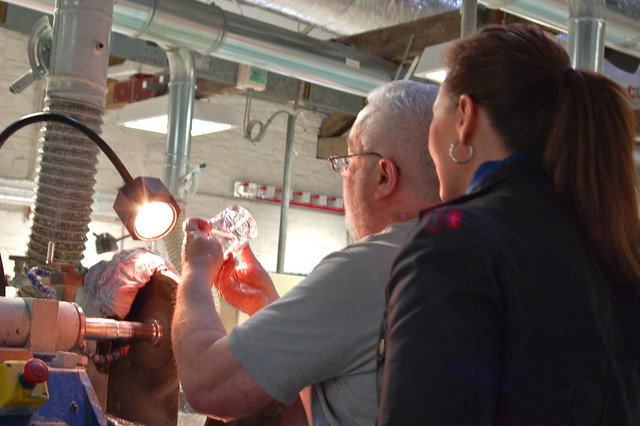 I was determined to get at least one good cut, but after five stabs at it, I gave up. My glass looked like it’d been attacked with a cleaver. My future as a Master Cutter was ruined. So much for my dreams of being a crystal-cutting prodigy. 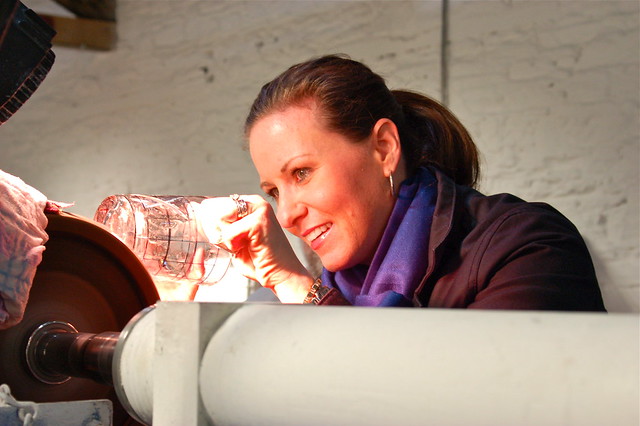 Being a great teacher, TJ wasn’t going to let me end on a sour note. The apply-named wedge cut I’d just attempted was the more difficult of the two. TJ showed me the easier flat cut that’s used to make the signature star on the bottom of Waterford pieces. Since the crystal is thicker at the bottom of the glass, I was told to apply more pressure than the wedge cut. I climbed back up in the Master Cutter’s spot and pressed my glass to the wheel. It was much easier and yielded even better results. 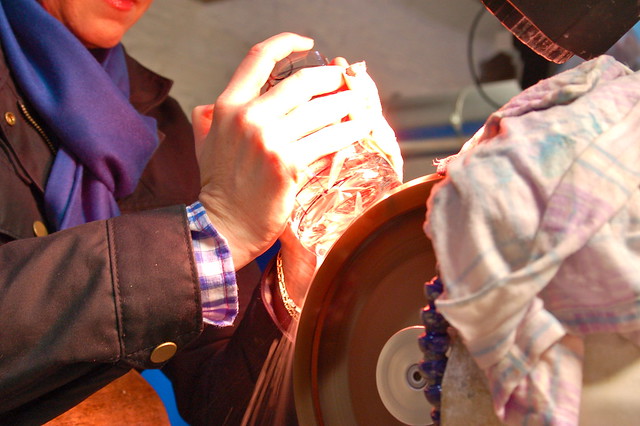 TJ pronounced me the best guest crystal cutter he’d seen that day. I chuckled, considering I was the only guest crystal cutter he’d seen that day. It didn’t matter. I’d gotten a chance to learn from a true artist. And as an added bonus, Karlin and I were given the glasses we’d annihilated with our names engraved on them. As I admired my not-so-beautiful-glass, I noticed the letters “REJ” written on the side in black marker. I asked Emma, “Does this mean REJECT?” She simply smiled. 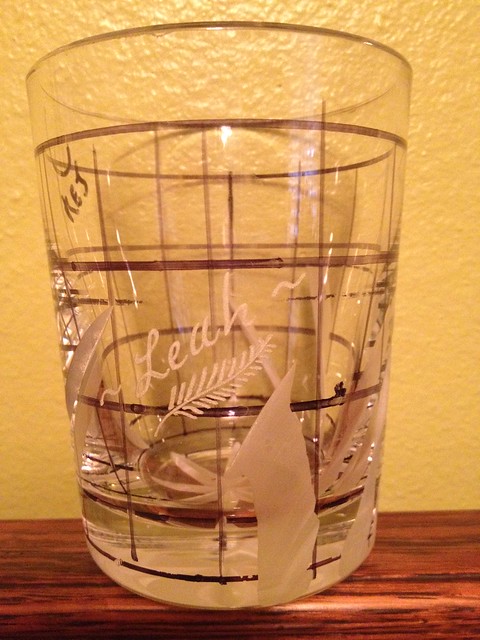 Check out part 1 and part 2 of my Waterford tour. Stay tuned for the fourth and final installment.

I Heart Houston: Favorites from the Bayou City