It’s safe to say that adventure travel is not my niche. I don’t own hiking boots, Velcro water sandals, khaki pants that convert to shorts, anything that resembles an Indiana Jones hat, and much to Traveling Ted’s dismay, I’ve not a fanny pack to my name. But the absence of all these REI staples doesn’t mean that I don’t love adventures. I just prefer to do them wearing J. Crew and with a good shower waiting. 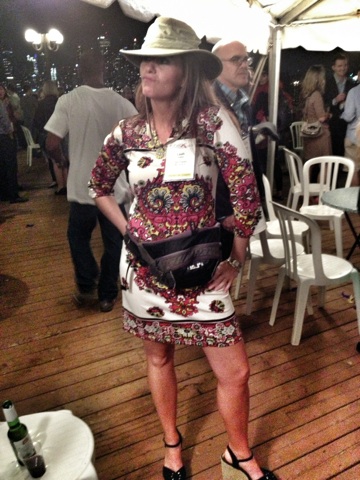 Looks can be deceiving; don’t let the la-ti-dah, five-star hotel stays and the Michelin-stared meals fool you. I’m a small-town Texas girl, and with that comes a certain set of skills. 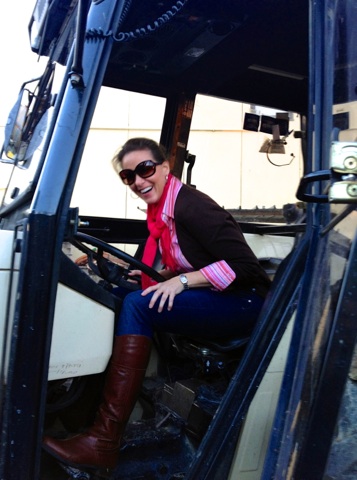 The other day I was chatting with a travel-writing friend about how I’d applied for an adventure travel trip.

“Is adventure travel your niche?” he asked despite knowing the answer.

Even though it was through IM, I could feel the laughter reverberating through cyberspace. I was only slightly offended, but half-heartedly defended myself by saying, “Hell, I rode a camel the other day.” 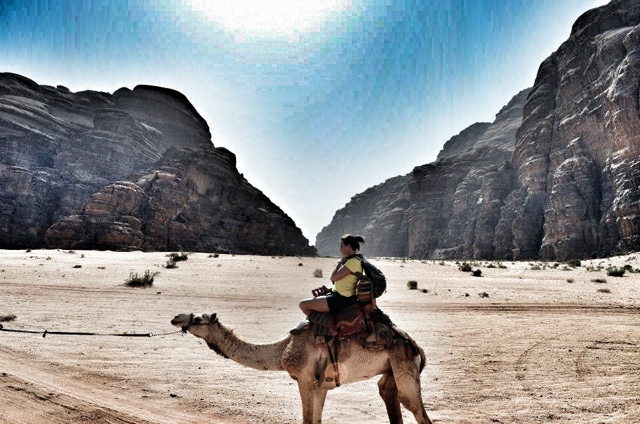 I’m pretty sure that resulted in an eye roll or two, but whatever. I proceeded to explain that I am a narrative writer who documents my experiences whether that be in the lap of Four Seasons luxury or riding in an air boat in the swaps of Louisiana. I’m all about doing and not just seeing stuff. I like the exhilaration of experiencing something different. I love having a new story to tell, which is why I was so excited about my trip to Jordan, especially the Wadi Rum part.

After days of exploring ancient Greek and Roman ruins, Petra, and hiking nine miles through the Dana Nature Reserve, it was finally time to get down and dirty in Wadi Rum. For those unfamiliar with this vast and mountainous landscape, it starred in the classic movie, Lawrence of Arabia, and is known as The Valley of the Moon. Basically untouched since its creation, the expansive blanket of sand is only interrupted by the massive sandstone and granite rocks. Let me put it to you this way: Only the strong {and a few Bedouins} can survive living in Wadi Rum. 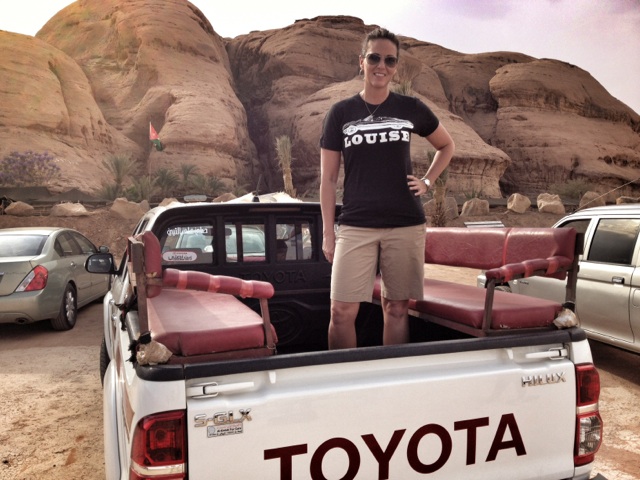 Climbing into the back of my 4×4 Toyota chariot, I was transported back 20 years; that’s about how long it’d been since I’d cruised up and down Main Street in the back of a pick-up. This wasn’t my hometown ‘drag’ but with the surrounding dirt and whipping wind, I needed only to close my eyes to feel like it was West Texas.  I pulled my hair back, otherwise I’d never get a brush through it. This wasn’t my first rodeo. 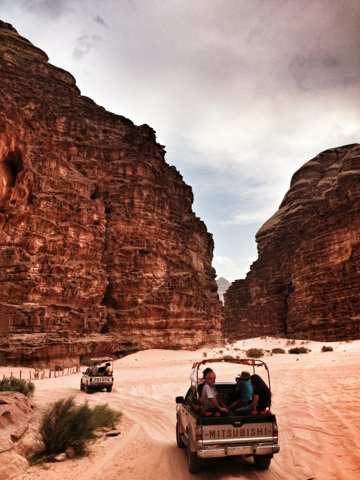 The truck driven by my Bedouin guide took off into the desert. Arabic music blaring from the radio only helped to set the scene. There was no road per se. Instead there were tracks where others had driven. As I rode deeper into nothingness, I was struck with a familiar feeling. Wadi Rum felt like a grand combination of Arizona’s Painted Desert, Utah’s Bryce Canyon, and Texas’ Big Bend National Park. It was magical, mystical, and otherworldly.

Through the desert I went with a perpetual grin firmly in place. Tiny grains of sand pelted my face and my teeth had a distinct grainy feel when I ran my tongue across them. Although I detest being dirty, in that moment I didn’t care. 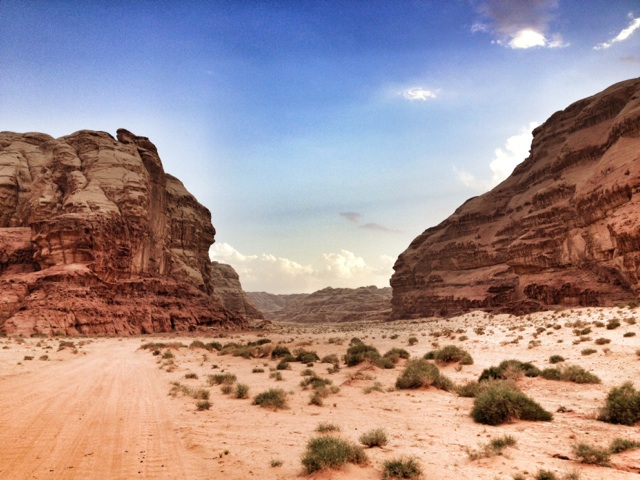 At a photo stop, I kicked off my Haviannas and sprinted to the top of a sand dune. Later, I rehydrated with tea in a Bedouin tent. With the landscape zooming past, I made up words to an Arabic song and danced alongside my guide, Ibrahim, in the back of the truck. 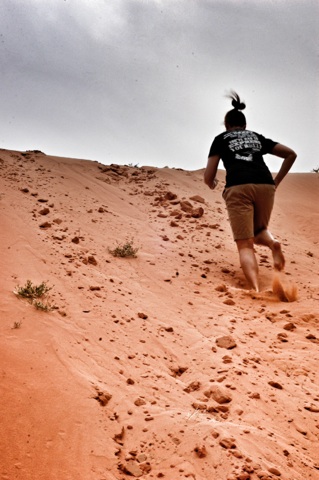 Despite my fear of heights, I climbed barefooted like a mountain goat to the top of Burdah Rock Bridge. At 115 feet {35 meters} high, it’s one of the highest natural arches in the world. And on the way to my camp for the night, I wasn’t thinking about how filthy I felt. Instead, I was too enamored by the sublime desert sunset. 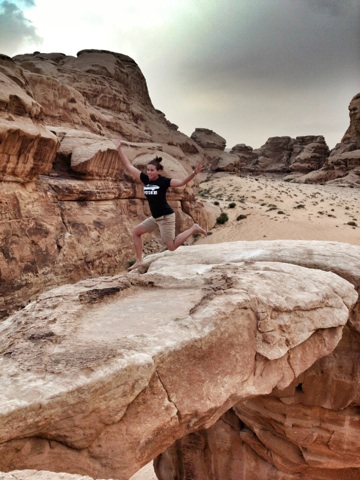 The feeling I experienced in my day discovering Wadi Rum is difficult to convey. You might think that being enveloped by such grandeur would lead me to feel insignificant. But ironically in a place void of much life, I felt more alive than ever. Wadi Rum may have had that effect on others, but I wasn’t prepared for such a profound experience. All I was looking forward to was a little adventure. 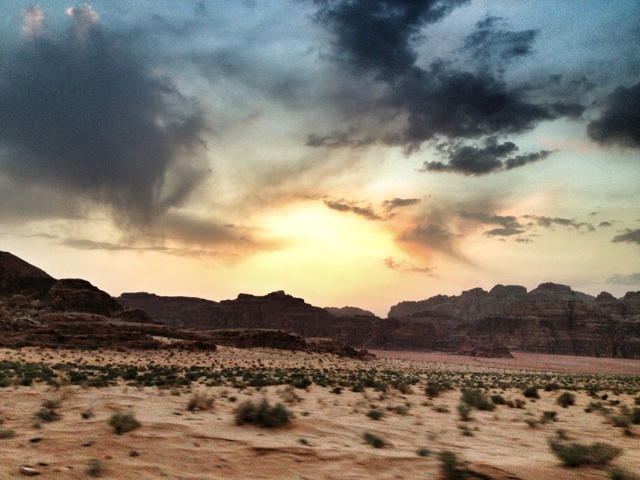 Back in March when I got my Jordan itinerary, I showed it to a friend. As she read it, her eyes became saucers. “YOU’RE going to go on a 4×4 tour of the desert AND sleeping in a tent?”

Every last dusty bit of it.

I was a guest of the Jordan Tourism Board North America. In no way was I influenced to write a positive review by the divine desert landscapes, kick-ass Arabic tunes, or the seriously stunning sunsets. As always, all opinions are mine.

A Taste of Trastevere