When it comes to travel, I’ve learned something is better than nothing. This lesson was tested to the max with just 24-hours in London.

I took the train into London after a night in Henley-on-Thames and an afternoon spent at The Crooked Billet, a fabulous pub in the English countryside. The sun had set long ago, but it was only about 6:00 pm. I crawled into one of London’s famous black cabs happy for the ability to communicate in English. After nearly a month in Prague, Italy, Barcelona, and Paris, it was a welcomed treat. “Hamilton Place and Park Lane, please.” The cabbie navigated deftly through the tricky London streets, weaving through giant double-decker buses and jaywalking pedestrians.

The city was alive on this cold, December evening. Christmas decorations adorned store fronts and lights were strung on anything that would sit still long enough. I’d always wanted to see London during this time of year and I was finally getting my chance. In the near distance I spotted the illuminated London Eye dominating the cityscape. The cabbie finally broke free from the stranglehold of stand-still traffic and we inched closer to the giant wheel. Before I knew it, I was at my destination: Four Seasons Park Lane.

From the outside, Park Lane was a thoroughly modern building and a stark contrast to the other European Four Seasons I’d recently visited. Seeped in history, Prague, Milan, Florence, and Paris were nothing like this property. I was intrigued. The bellman opened the cab door, greeted me with a warm smile, and grabbed my bag. 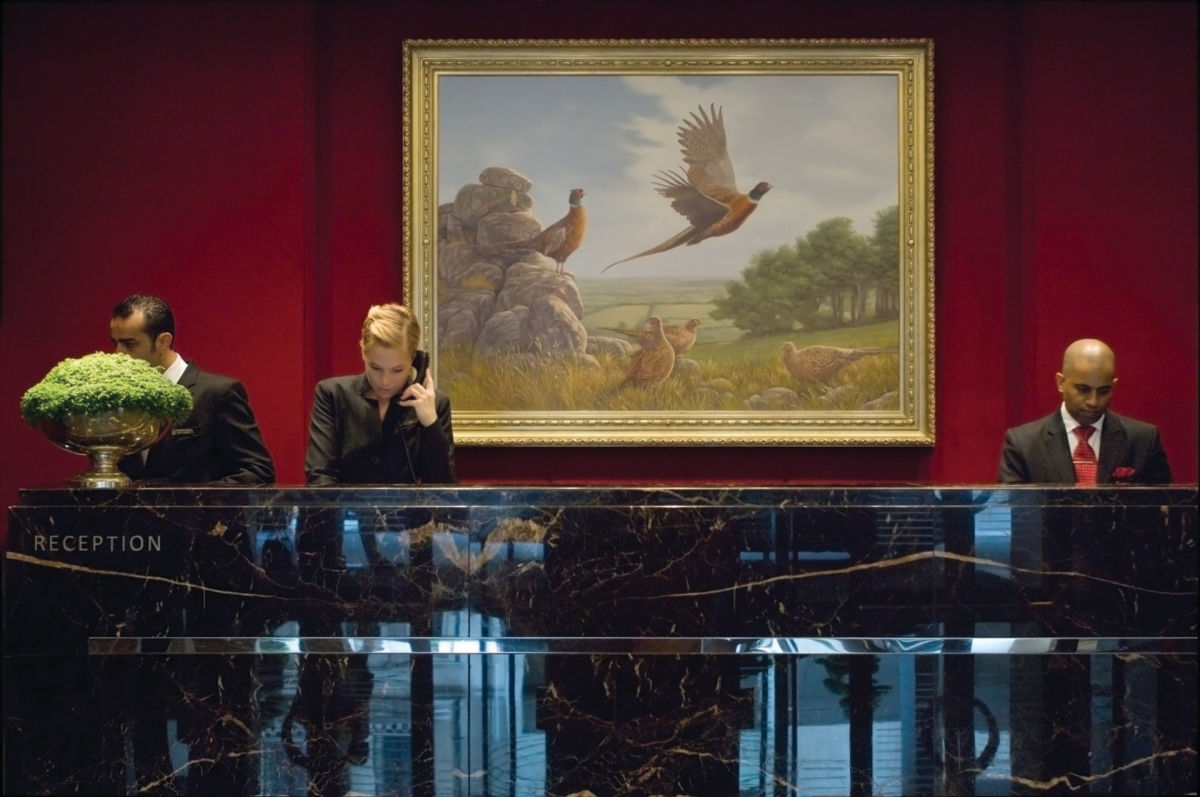 As soon as I walked into the hotel, I knew I would love Park Lane. Immediately my attention was drawn not to the check-in desk, but to the pops of vibrant red that saturated the walls, floors, pillows, chairs, carpets, and flowers in the Amaranto lounge, bar, and restaurant. The zebra-print accents only made me love it more. Classic-looking Elizabethan portraits hung from the walls in sleek black frames and contemporary-shaped chairs were accented with nailheads, perfectly mixing traditional English design with modern.

Walls of wine bottles were illuminated and served as artwork. Panels of shelves were lined with brightly-colored Italian glass. The black marble floors glistened and reflected the light from the massive fireplace. My eyes were manic jumping from one element to another. It’s as if the designer took all of my favorite things and put them into Park Lane. If I were to build a hotel, this would be it. 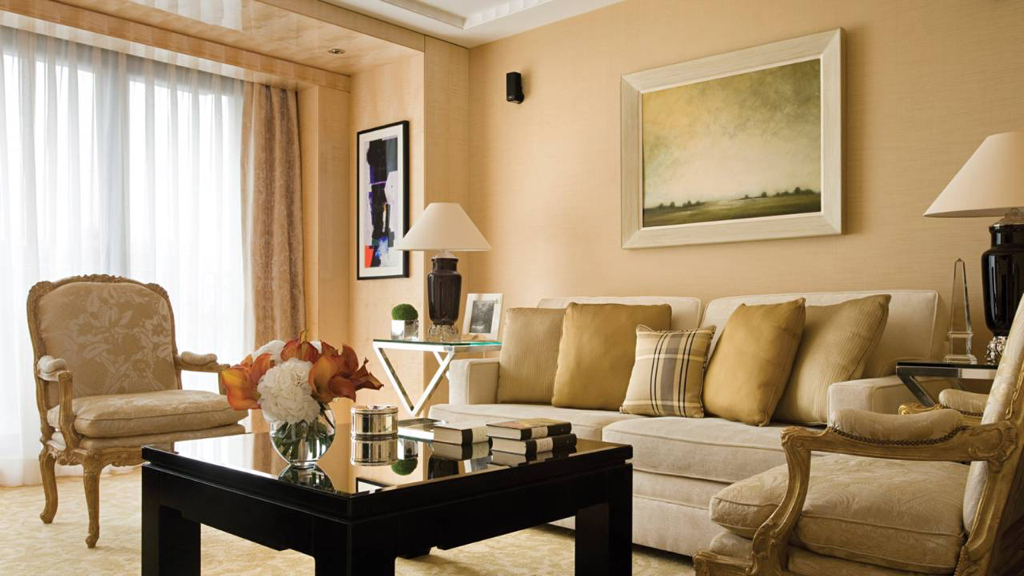 The front desk staff rattled me out of my state of enamorment enough to give me the key to the room. Along with Lola, I was escorted to a deluxe one-bedroom suite. With the opening of the door, I was certain that we were in the wrong place. Surely this was the Presidential Suite. After all, it had a powder room and I couldn’t even see the bed from the entrance. At 1,205 sq feet, this hotel suite was by far the largest I’d ever slept in. With a dining room for four and a living room with a fireplace, I imagined it was much larger than most London apartments.

A stark contrast to the vibrant lobby, the suite was beautifully decorated in muted gold and neutral tones. The bellman walked us through and placed our bags into the closet. Keeping with the deluxe theme, this was much more than simply a closet; it was a giant dressing room that even included a vanity. I would absolutely kill for this setup at home. 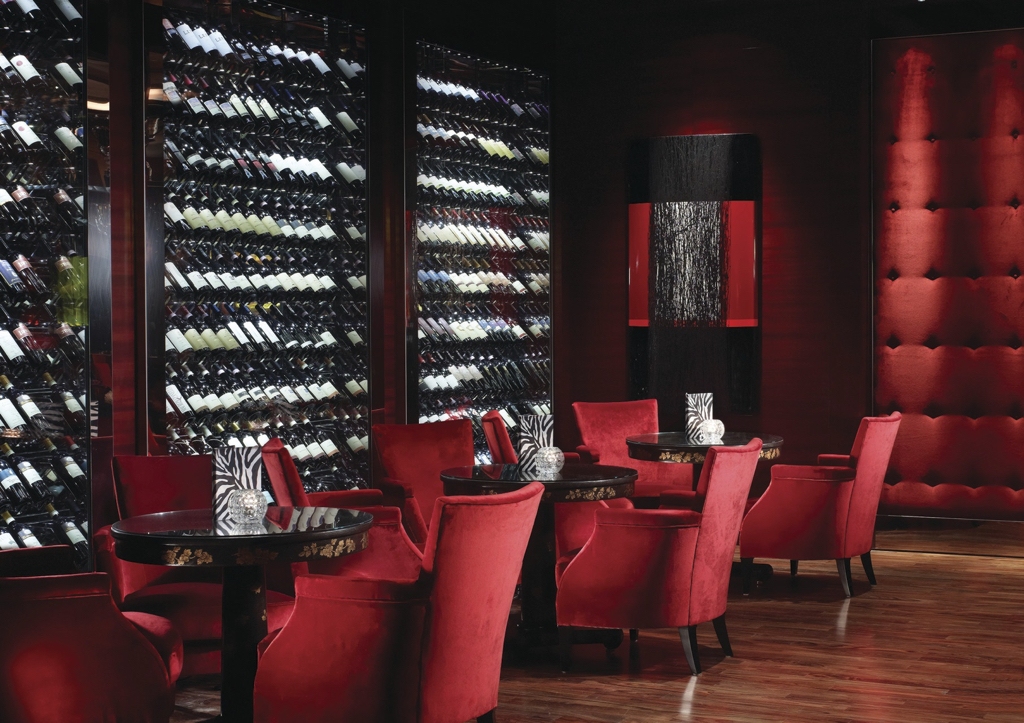 I caught a glimpse of the massive bedroom. The fabric headboard was studded with nailheads and the mirrored nightstands were armed with beautiful glass lamps and bottles of water. The king-sized bed and cloud-like down pillows and duvet were inviting to this weary traveler.

A connoisseur of bathrooms, I couldn’t wait to see this one. Black marble covered not only the floors, but also the walls. Stainless steel fixtures were sleek. Full-sized toiletries by Roja lined the sink, bathtub, and shower. Plush white robes hung from hooks on the wall. The shower was so large that I could lay diagonally in it. And I did. This was a bathroom that spoke to me.

After educating Lola and me on all the buttons, controls and devices available, the bellman then showed us the other room. Yes, that’s right. Another room. Adjoining the Deluxe One-Bedroom Suite was a Deluxe Room. That was ours, too! We had just about 1,600 square feet at our disposal. With two twin beds, a seating area, writing desk, and its own dressing area and marble bathroom, this room offered the same luxury as the Deluxe Suite only in a smaller version. I was smitten. 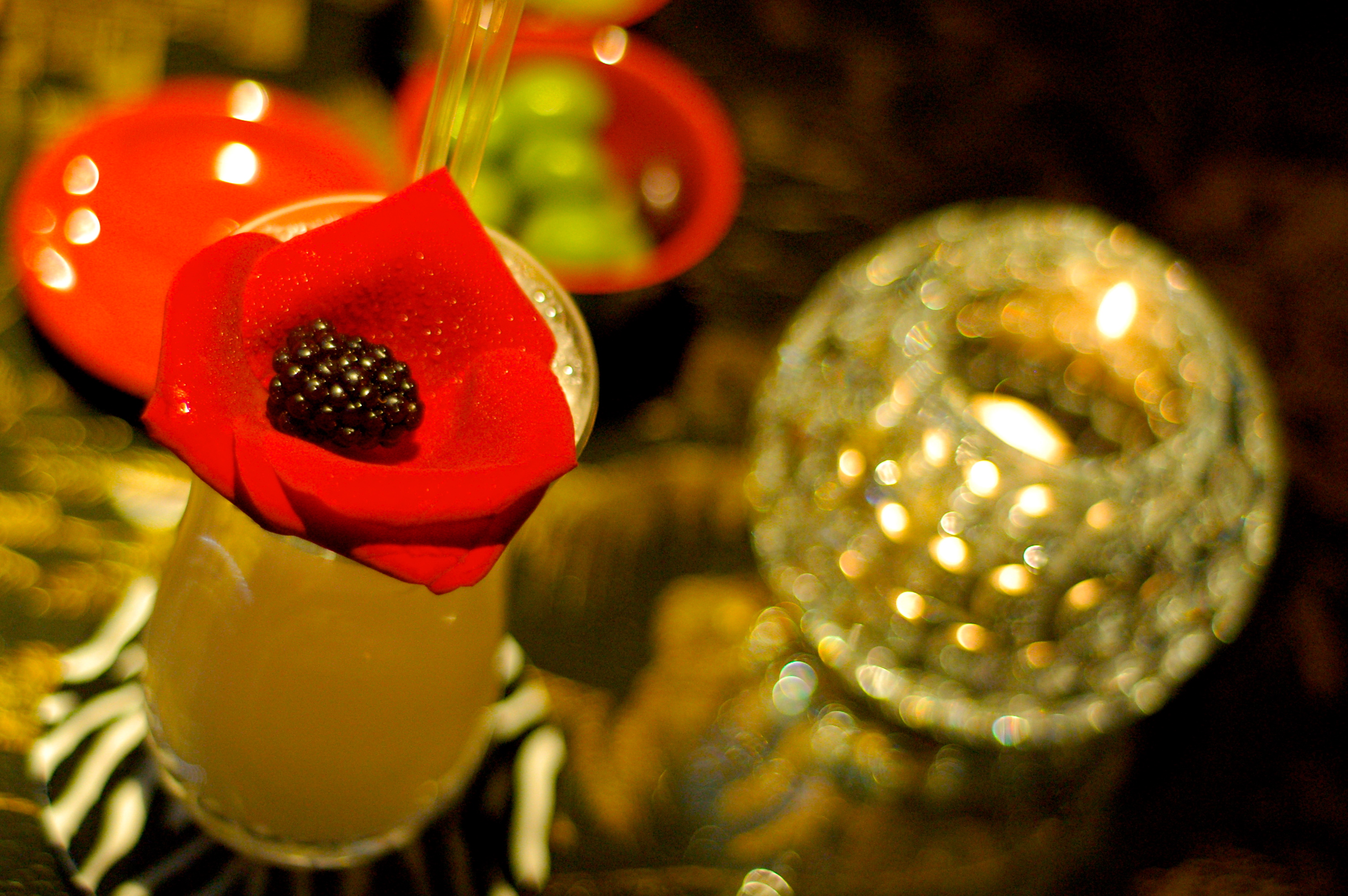 After sufficiently gawking at the London Eye from my balcony as well as my fancy digs for the night, I freshened up for dinner. Too late for the planned kitchen tour by Amaranto’s Executive Chef, Davide Degiovanni, Lola and I elected to have a casual meal and cocktails in the adjoining Amaranto Bar, which was easily my favorite room in the hotel. The red wingback chairs, dim lighting, and fireplace made for a very intimate and inviting space.
I’m a huge fan of specialty cocktails and could have picked anything from Amaranto’s menu and been happy. Being a lover of all things lychee, I decided on the Lychee and Rose Petal Affair. Not only was this vodka-based drink delicious, it was as beautiful as the name suggested. Real rose petals and a blackberry topped the refreshing drink.

Subsequent cocktails filled the table throughout the night, including the seasonal Merry Truffle. This creamy vodka, Frangelico, and apple liqueur martini with white truffles shaved on top, was a drink so decedent it came with a spoon.

Alcohol wasn’t the only order of the evening. Although presented with menus, Lola and I chose to simply have Chef Davide send out whatever dishes he wanted to showcase. That decision was easily the best one I’d made all day. 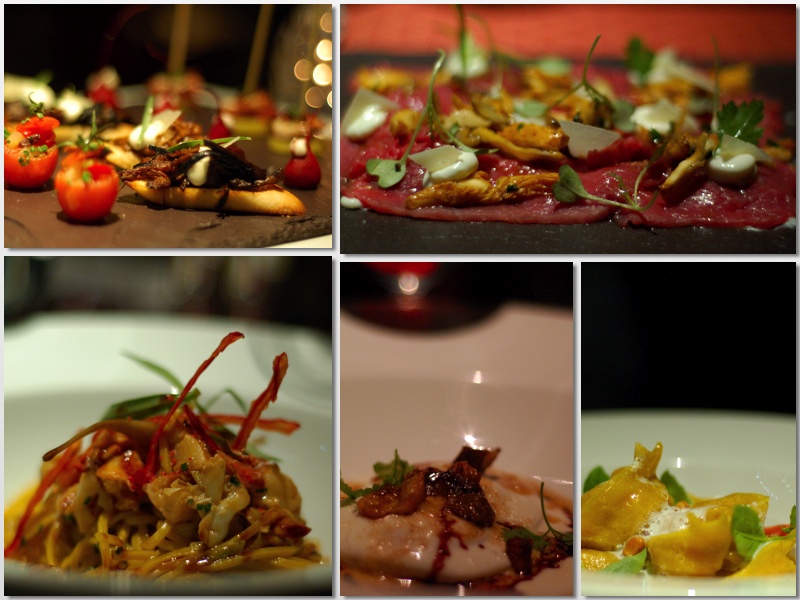 In the previous 30 days, I’d visited four other Four Seasons properties and had countless fabulous meals, so the fact that Chef Davide had two of my top ten dishes from Four Seasons Europe is really a testament to him. The thinly-sliced raw Fassona beef, raw mushrooms, Jerusalem artichoke, Tuscan sheep’s milk cheese, and Pregiato black truffle was a nice change after all the heavy dishes I’d been eating. An Italian meal wouldn’t be complete without a bit of pasta, and the lobster and artichoke tagliolino, fresh ricotta, and clementine zest was exceptional.

Utterly satisfied, it was time for me to retire for the evening. The thought of putting on my pajamas and drawing the drapes sounded like heaven. I would fall asleep as soon as my head hit the down pillow. I’d had a big day, but it was nothing compared to what was in store for me the next.

I was an invited guest of the Four Seasons Park Lane, but in no way was I swayed to write a positive review by their flashy pops of zebra print, the spectacular view of the London Eye, or their unbelievably friendly staff. As always, the opinions are mine.

Things to know about the French before visiting Paris