Leaving my splendid seaside home in Cadaqués was no easy task, and it wasn’t because of the one mountainous road out. I simply wanted to stay in the stunning Costa Brava town. Nonetheless, it was time to depart; Castelló d’Empúries was waiting and I was searching for Medieval history in Costa Brava.

Located near Empuriabrava and its beautiful marina, Castelló d’Empúries is a village dating to the 9th century. Established as the capital of Empúries in the Middle Ages, this historical place has retained much of its original design, including the Jewish Quarter, squares, and perhaps most importantly, the Minor Basilica of Saint Maria of Castelló.

Basilica of Saint Maria of Castelló 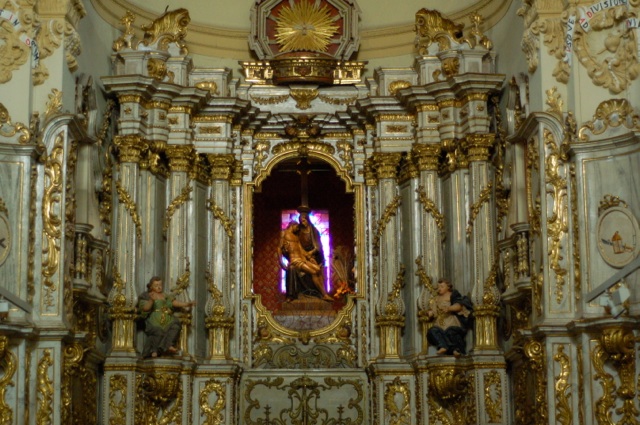 Although the church was closed, a man from the community was kind enough to open it and show me around. His knowledge was vast and English excellent, certainly better than my Catalan. Construction began in the 13th century and wasn’t completed until the beginning of the 15th century. With its qualifying dimensions, Saint Maria has not been named a cathedral, much to the dismay of those from Empúries. The front of the basilica is framed by accordion-like arches with inset statues and imposing metal riveted doors. 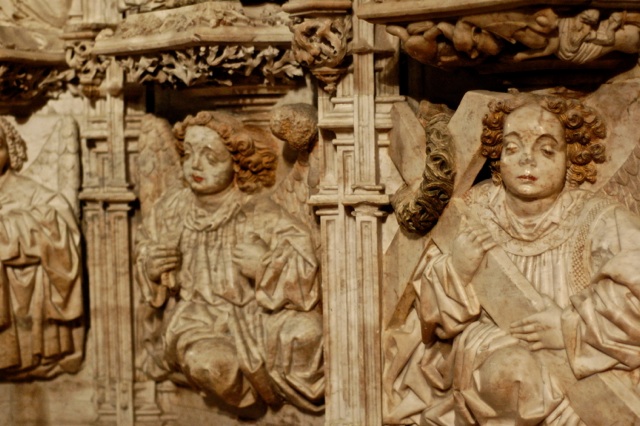 The Gothic Mediterranean interior is full of stained glass windows, stone carvings, and painted frescoes. Its main alter is surrounded by an iron gate, but I was let in for a closer look. At first glance, the ornate alabaster alter reminded me of Gaudi’s Sagrada Familia with its tall, narrow spindles.

Within the basilica is a small museum containing various Catholic artifacts. From art depicting stories in the Bible to various gold and silver objects to robes worn by priests, I’m glad I took the time to walk through. There were some very special pieces. 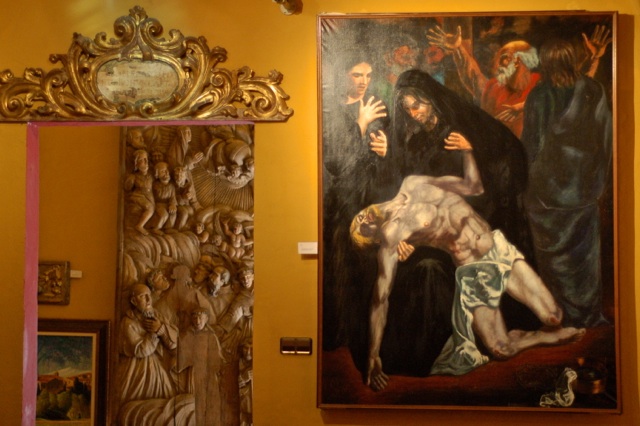 About a five-minute walk from the basilica along narrow alleys and cobblestone paths, is the Prison of Castelló d’Empúries. This Gothic building built around 1336 served both as the court {curia} and the prison. On my tour, I was led through several floors and multiple cells. With stone walls, metal bars, limited light, and dank conditions, it’s no wonder some of the prisoners were crazy. This place was no cushy country club prison, that’s for sure. Graffiti from those imprisoned between the 17th and 19th centuries can still be seen. 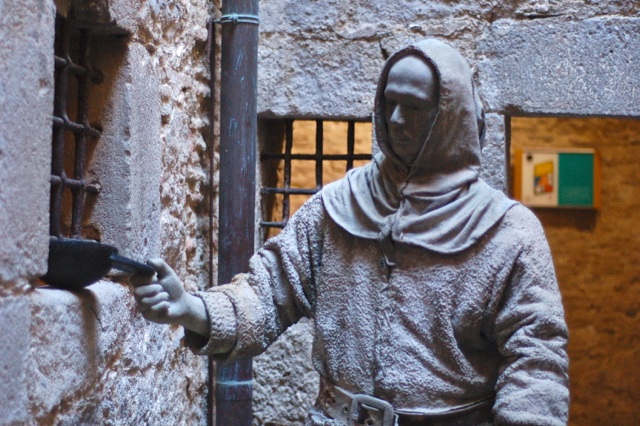 The prison tour ended in a room filled with relics from the medieval Jewish quarter. Here headstones from the ancient Jewish cemetery in Empúries can be seen. There’s also a huge model depicting what the town looked like in the 14th century, as well as a short film called, Between the Crown and the Sword, that explains the history of Empúries.

Since I like to fashion myself as a princess {however delusional that might be}, my ears perk up when I hear the word castle, specifically when combined with the words, you’re staying in. Visions of soaring ceilings, ornate artwork, secret passages, damp dungeons, ghosts, and quite frankly, Downton Abbey, come to mind. Obviously I couldn’t wait to see my vision come to life in Costa Brava. 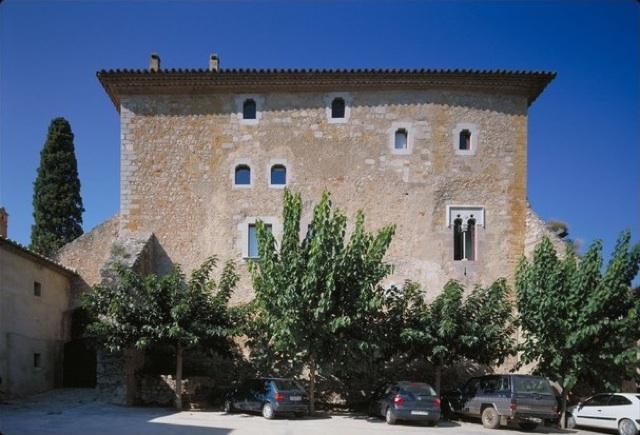 I’ve stayed in exactly one castle before: a fancy-schmancy one in Ireland called Dromoland Castle. It dates back the 5th century and was once the Gaelic ancestral home of the direct descendants of Brian Boru, the High King of Ireland. Although it was totally awesome in regard to luxury and the aforementioned ceilings, artwork, and Downton Abbey-esque feeling, I found it a little white washed for my castle fantasy. Enter Castell de Rocaberti. 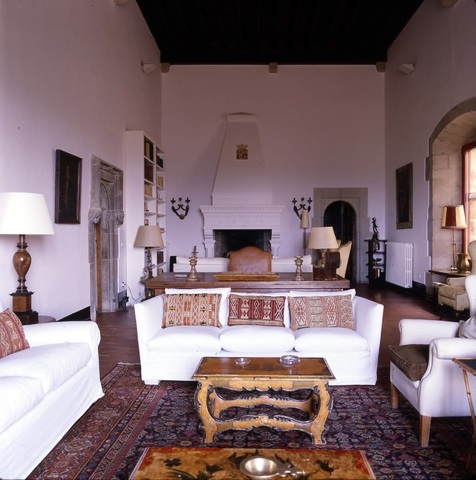 In a tiny village somewhere between Girona, Figueres, the Costa Brava beaches, and France, lies Castell de Rocaberti. This 11th century medieval castle is monstrous–I’m talking HUGE! Seeing it for the first time, I thought it might have at least one secret passage and maybe a dungeon. With four floors, 15 bedrooms, and 13 bathrooms, two dining rooms, and two kitchens, how could it not? 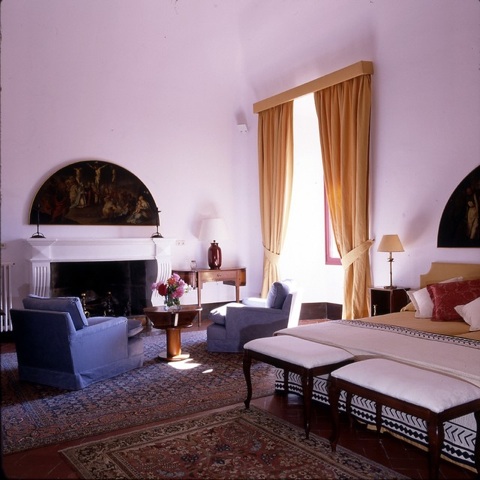 In the same family since the 14th century, everything about the castle is grand, and very well it should be; it’s welcomed kings, queens, and one travel writer from Texas. There’s something to be said about being in someone’s home as opposed to a hotel. I felt free to roam around as I pleased without getting any crazy looks. I went from room to room and floor to floor inspecting every square foot, but no dungeon or secret passage did I find.

Deciding on an en suite room on the main floor, I settled in for my two nights in Castell de Rocaberti. My room wasn’t the most grand with the fanciest furnishings in the castle; that’s not why I chose it. Instead, it was what I found outside the window. Behind the heavy drapes and shear curtains were the most gorgeous green rolling hills and a sunset that set the sky ablaze. Later that evening over a home-cooked paella dinner, the owner of the castle, Mariano Sanz, which room I’d chosen. When I told him, a smile came across Mariano’s face and he said, “That was my room when I lived in the house. It has the best view. Great choice.“

So maybe Castell de Rocaberti didn’t have a medieval dungeon, and I never found any secret passage, but it did have a view that would make Downton Abbey envious. And it had paella. I mustn’t forget the paella.