The first time I remember learning about Dubai came from Matt Lauer in his yearly segment, “Where in the World is Matt Lauer?” The Today Show anchor hopped around the globe to dream locations every day for a week. I can’t remember all of the Dubai details, but I do remember the World and Palm archipelagos and the unbelievable skyline. I couldn’t imagine a place, in the middle of a desert, to have such marvels. Fast-forward five years, and I’m working in the oil and gas business in Houston. With the strong industry ties to Dubai, the city again appeared on my radar. 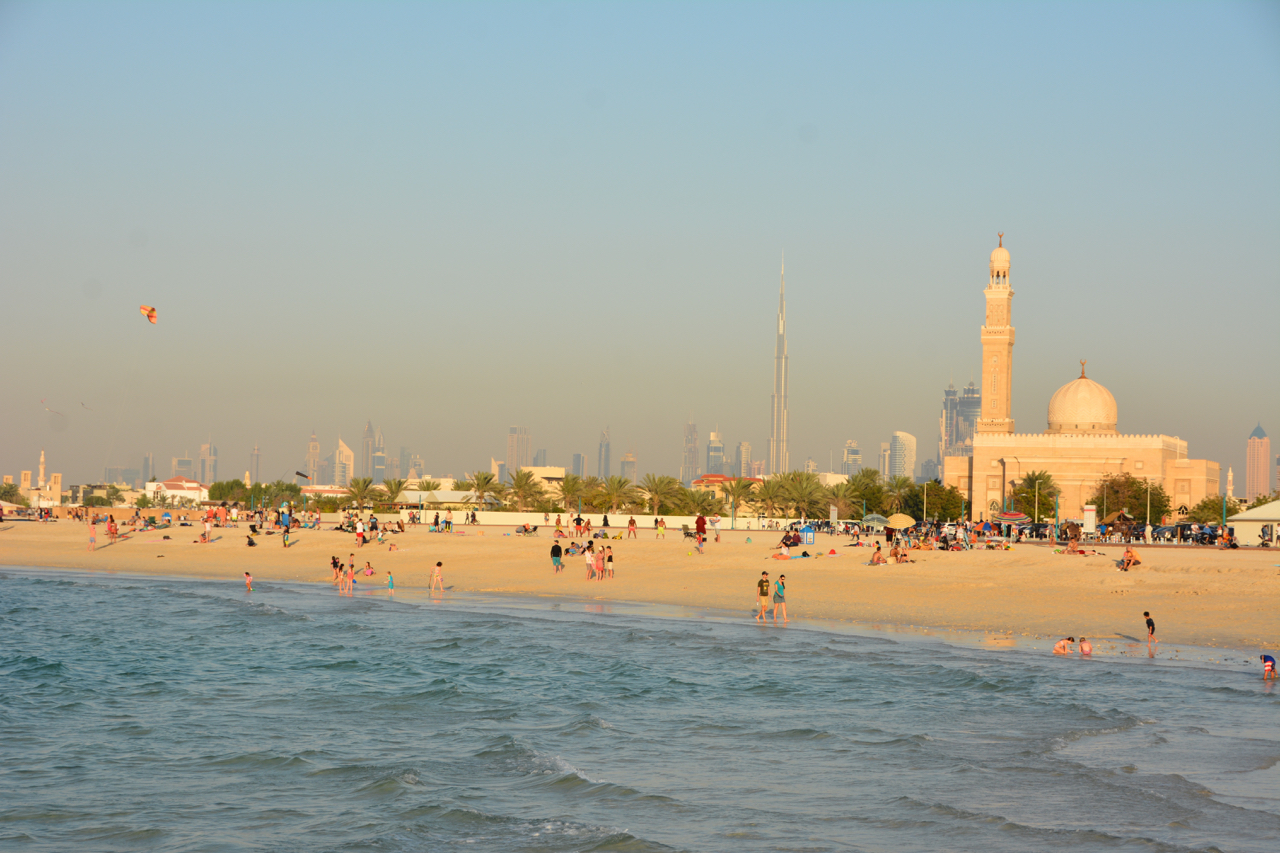 Finally, in January 2016 I saw this desert wonderland for myself, marking #3 off my to-do list. Flying Emirates from France to Mauritius, I utilized the airline’s stopover option and spent five days exploring Dubai. Like other cities that have captured my imagination {Rome, Las Vegas, NYC, and Paris}, I wasn’t prepared for Dubai. Its grandiose and imposing scale was unlike anything I’d ever experienced. But its towering buildings weren’t the only surprising things about visiting Dubai. 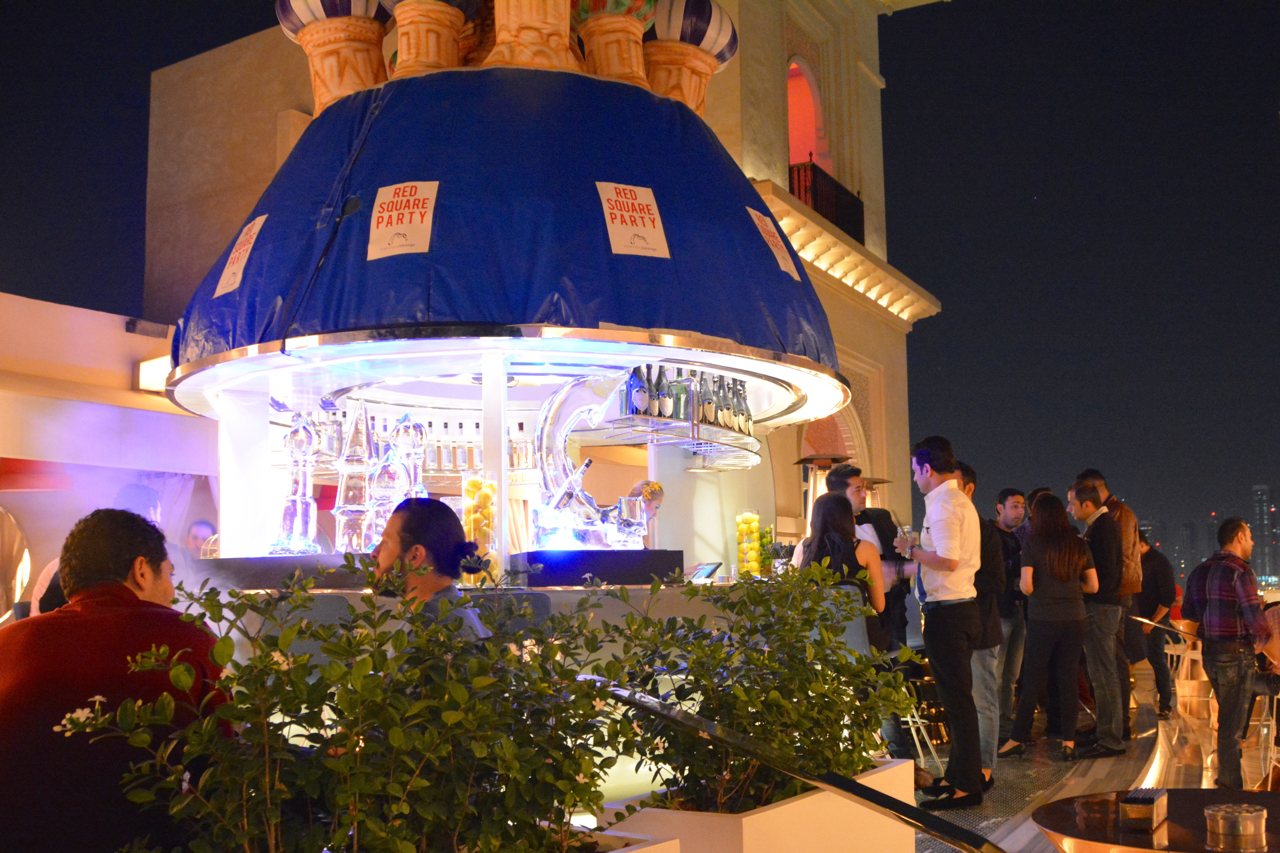 I’ve not extensively traveled the Middle East, only having visited Jordan and Egypt. However, those trips did give me some insight into Middle Eastern customs. The mosques, bustling souks, modest clothing, and absence of pork are commonplace in the region.

Dubai is a hotbed of corporations in everything from oil to medicine to banking to technology, and because of that, there’s a large expat community. Large is actually an understatement. In fact, Dubai’s population is 9.2 million, with expats comprising 7.8 million of that number. That means that only 1.4 million Emiratis actually live in Dubai, making them almost as rare as the red diamond. 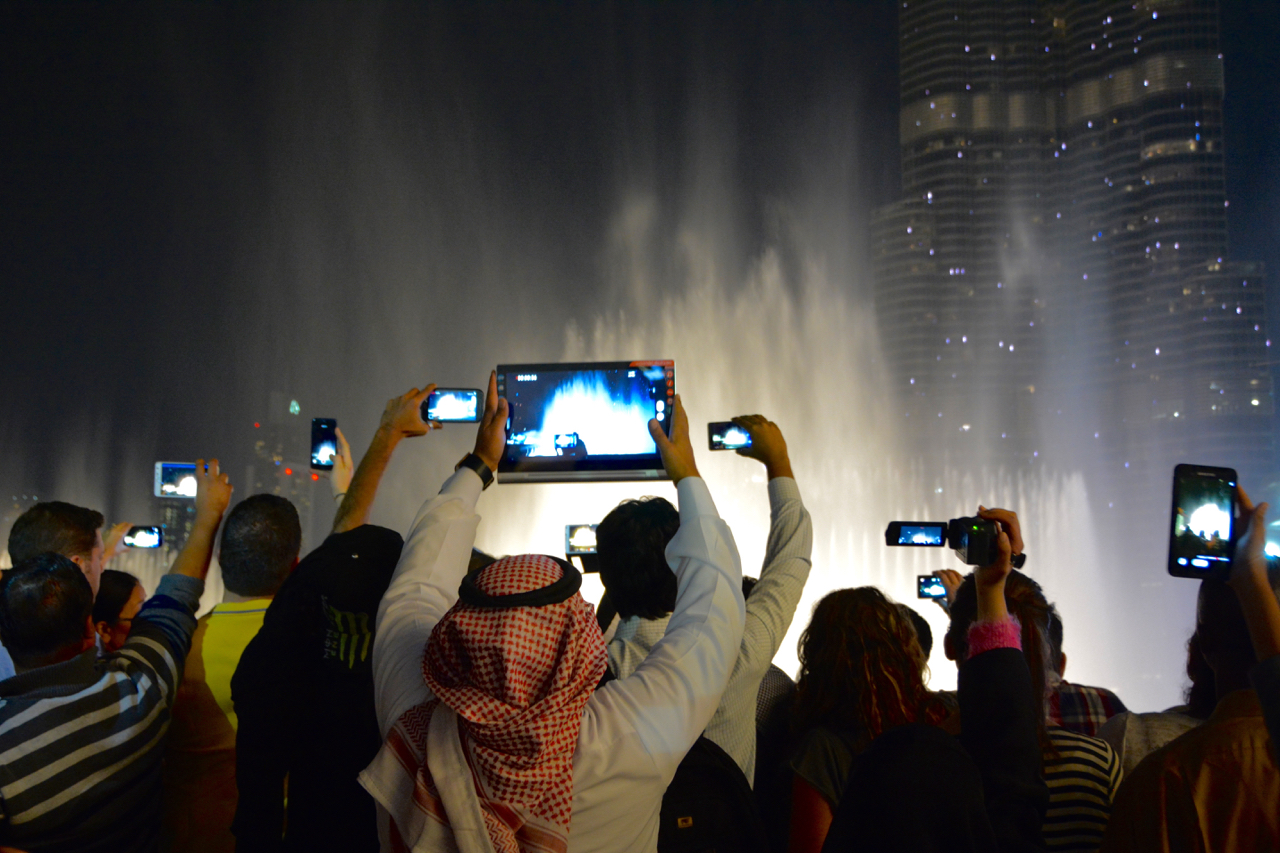 Despite the massive expat community and constant flow of Western business travelers, Dubai is still an Islamic country, though it’s sometimes easy to forget. As tradition dictates in Arab countries, you can see the red, green, black, and white in U.A.E. flag and hear calls for five daily prayers. Many women wear hijabs {headscarves}, while men wear the dishdash {long white robes} and keffiyeh {headscarves}, held in place by aghals. 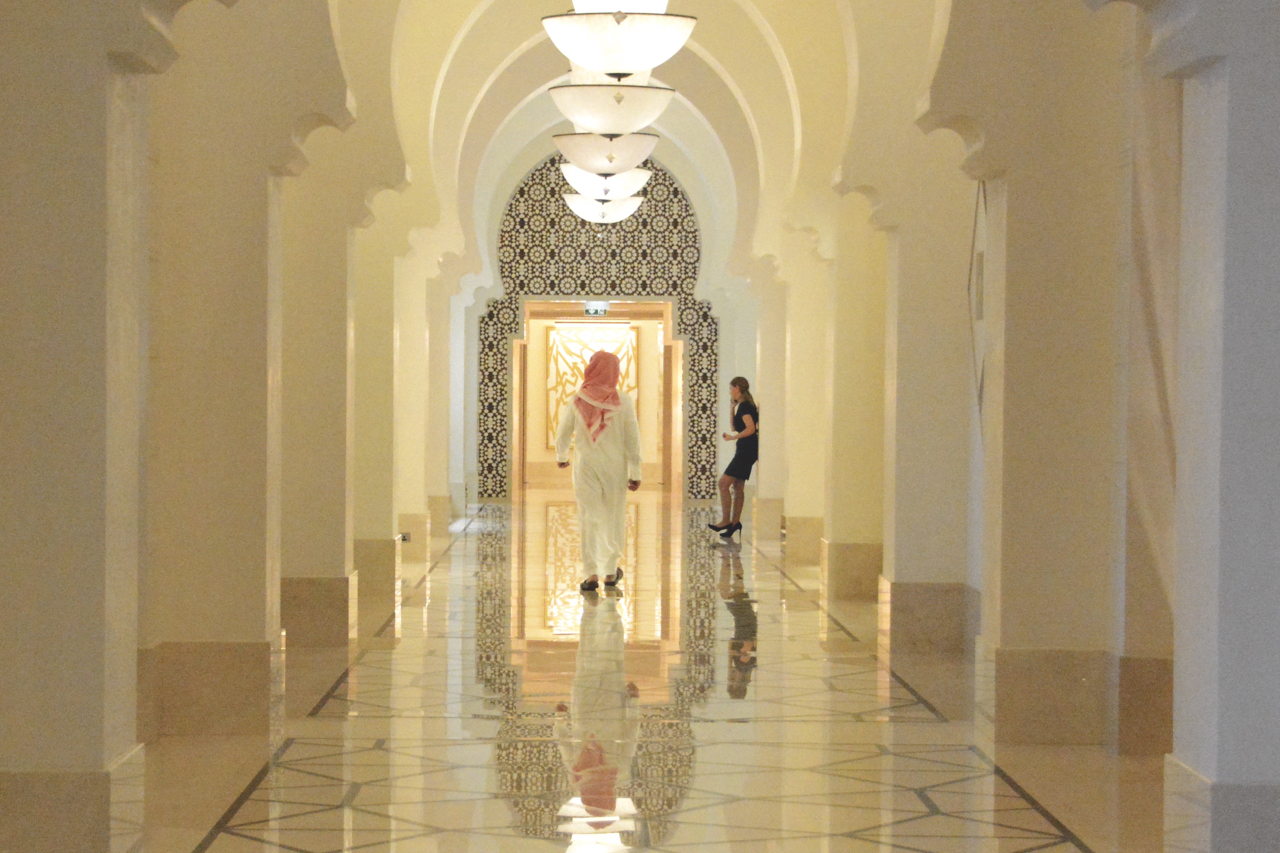 None of this was surprising; rather, it was the clothing contrasts. My first night was spent at Four Seasons Resort Dubai at Jumeirah Beach. From their stunning sixth floor Mercury Lounge, I could see the Burj Khalifa, the world’s tallest building. I could also see some high heels and short skirts. And, no, these weren’t Western women. Perfectly shaped eyebrows and artfully applied makeup were also common sights. Many of the women in Dubai weren’t about going unnoticed. Instead, they stood out magnificently. Glamorous and stylish, their red lips and perfectly-coiffed hair made me feel downright frumpy. 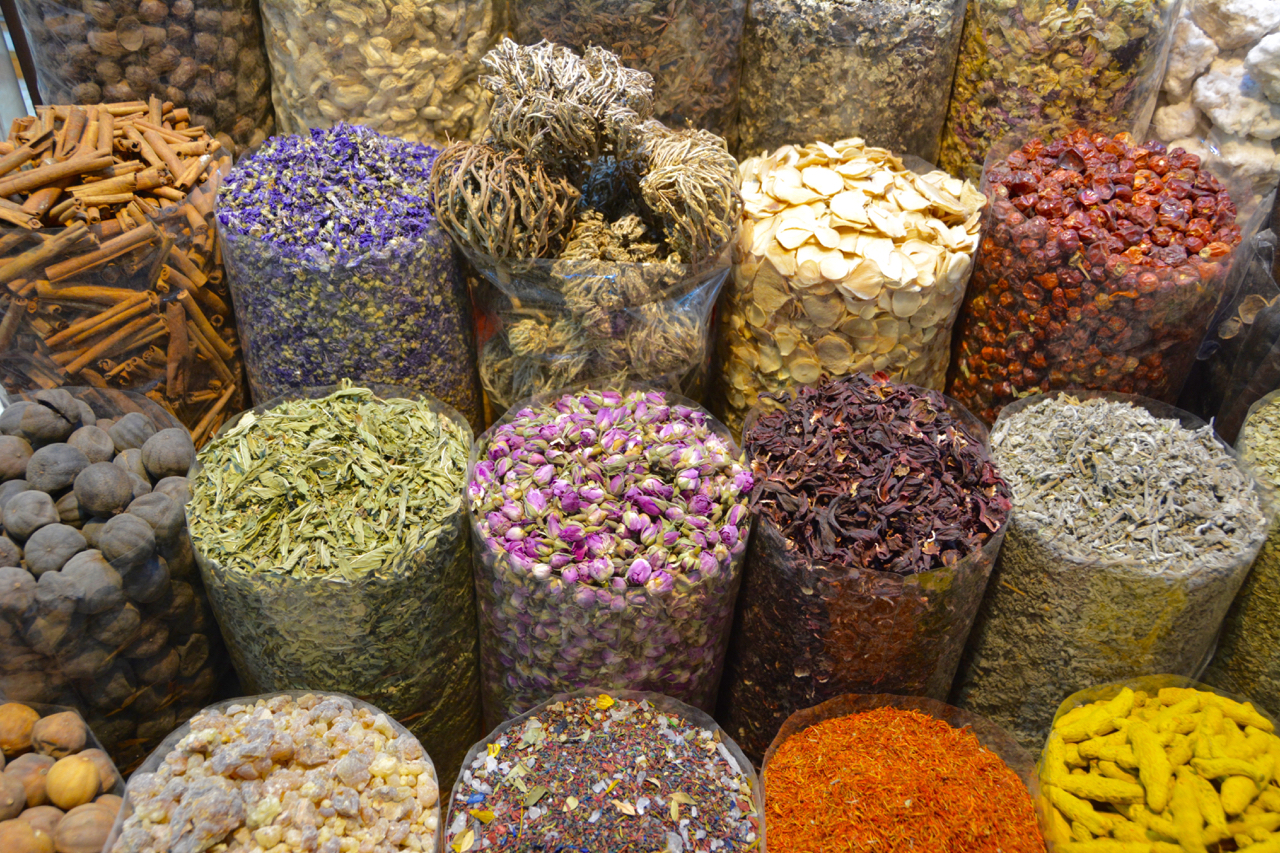 The city now known as Dubai dates back thousands of years. Fishing, pearl diving, and trade once sustained the area, but when oil was discovered in 1966, everything changed. In 1971, Great Britain left the Persian Gulf, and Dubai, Abu-Dhabi, and five other emirates formed the United Arab Emirates and created a joint currency. In the next decades, desert was covered in concrete and the flat landscape was filled with mountainous skyscrapers. Chicago meets Manhattan meets Hong Kong, Dubai’s mounds of metal of varying architecture must be seen to be believed. 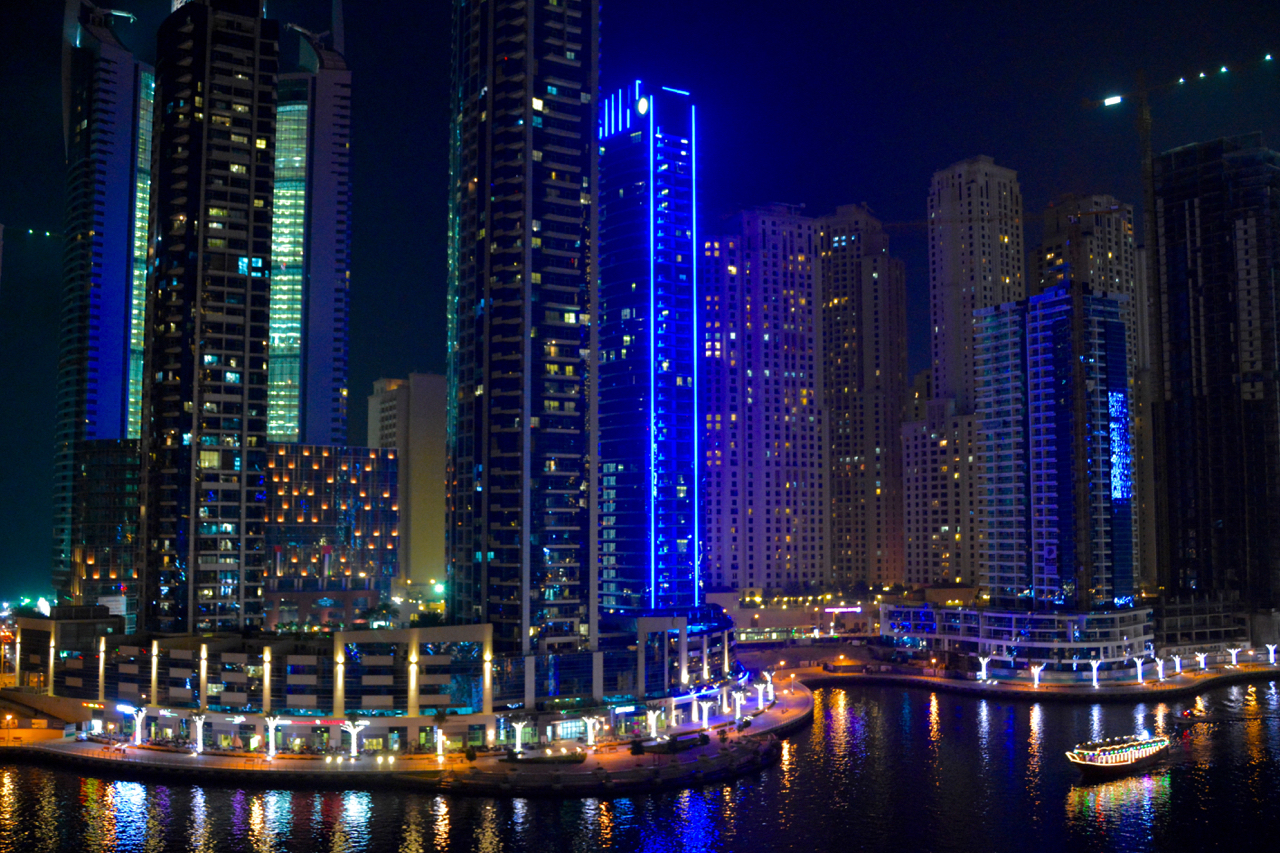 The buildings built along Sheikh Zayed Road stand like soldiers protecting one of the main thoroughfares in Dubai. But it wasn’t too long ago that this road was made of dirt. The Jumeirah Beach Residence {JBR} and Dubai Marina skyline resembles a massive, man-made version of Giant’s Causeway in Northern Ireland. 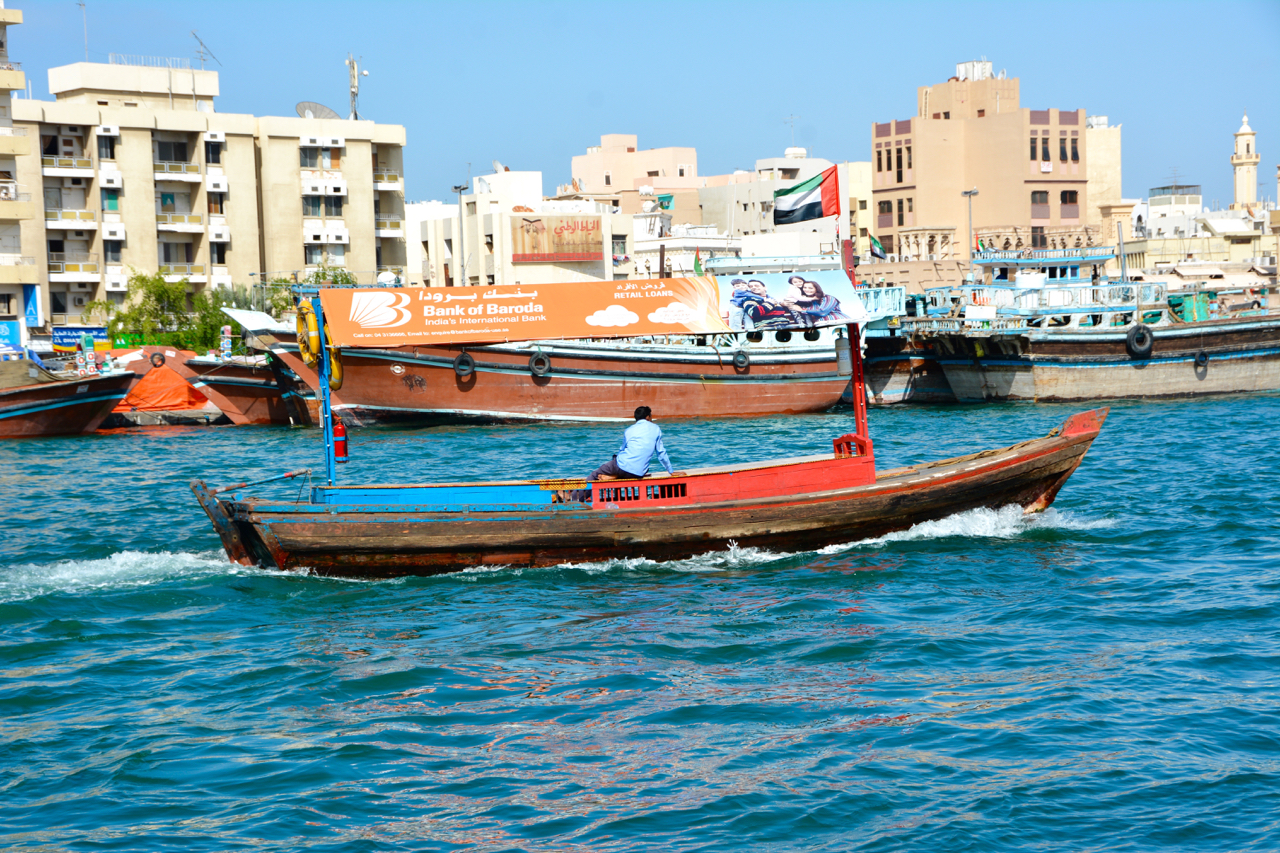 Though, tucked within all the metal and glass is old Dubai. Visit Bastakiya, also known as Al Fahidi Historical Neighbourhood, where the buildings are made of stone, gypsum, and wood, to see how people lived from the early 1900s, until oil transformed the city. Take a dhow through Dubai Creek, a historical saltwater waterway once used for fishing, pearl diving, and trade. Today, traditional dhows are still used to move everything from dishwashers to dates from the Persian Gulf to East Africa. 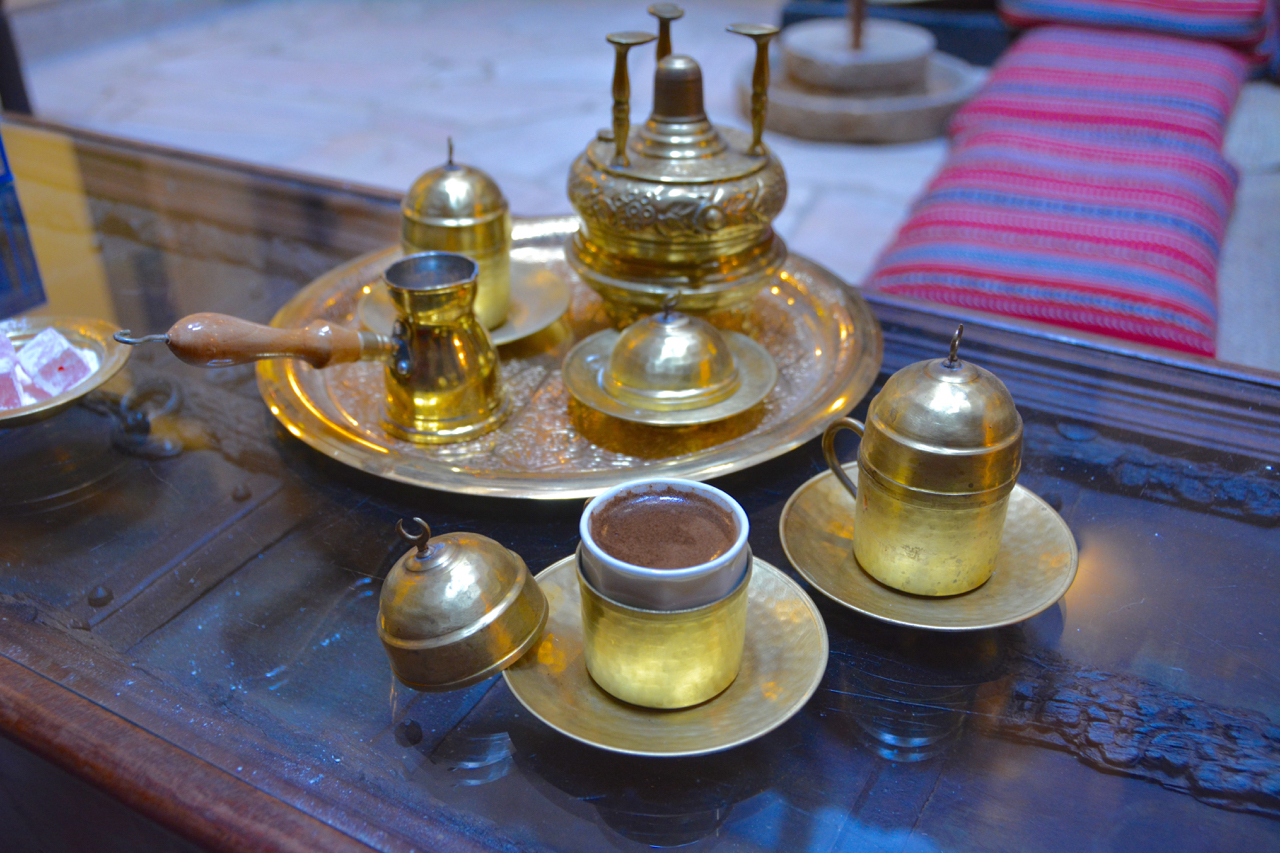 Wander the Spice and Gold Souks, as well as Grand Souk Deira. Visit the Heritage Village for a peek into Dubai’s pearl and fishing past. Break away from all the buildings by driving an hour to Big Red, the area’s largest sand dune. Although Dubai is known for its modern marvels, there still remains a link to the city’s former identity. In order to fully appreciate the new, I believe one must first understand the city’s roots. 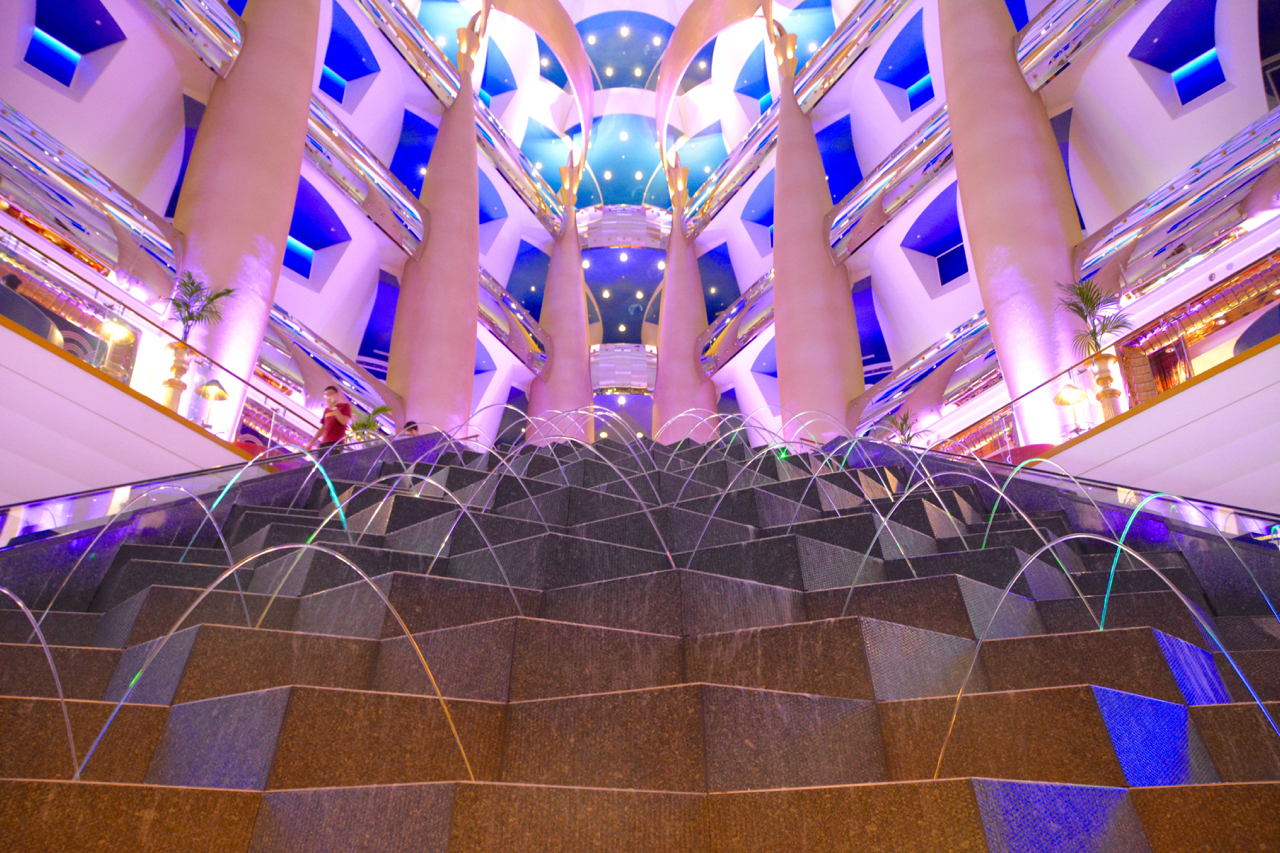 Specializing in luxury, I’ve seen and experienced plenty in the world’s most glamorous cities. However, nothing as widespread and common as in Dubai, a place where nannies drive new Range Rovers and Porsche Cayennes. Speaking of cars, Bugattis, Bentleys, and Lamborghinis abound, making the common traffic jams like a day at the Paris Motor Show. A stock Ferrari is laughable. Rather, customization is how Emiratis distinguish their 458 Spider from their neighbor’s. 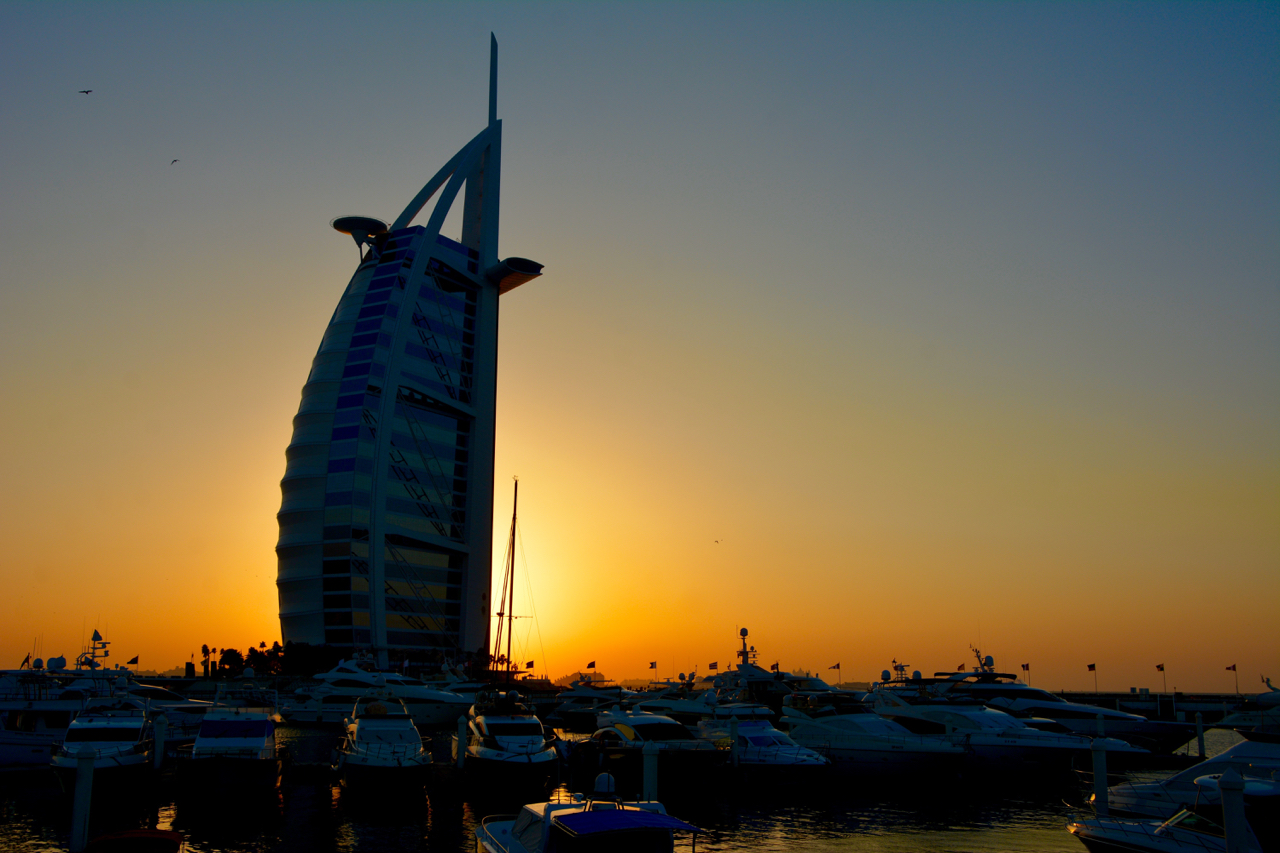 And forget about Rome’s classic Trevi Fountain or even Vegas’ Fountains of Bellagio, the Dubai Fountains are bigger, louder, and taller than its predecessors. Five-star palace hotels are so yesterday. Dubai hotels are over-the-top in terms of luxury. The city has the Burj Al Arab, the iconic, sail-shaped building on coastline of Umm Suqeim. Thanks to a journalist’s article quip, the Burj Al Arab now bills itself as the only seven-star hotel in the world {which totally isn’t even a thing}. Don’t even think about popping over to the island to grab a drink, unless you have reservations. There are no looky-loos allowed at the Burj. 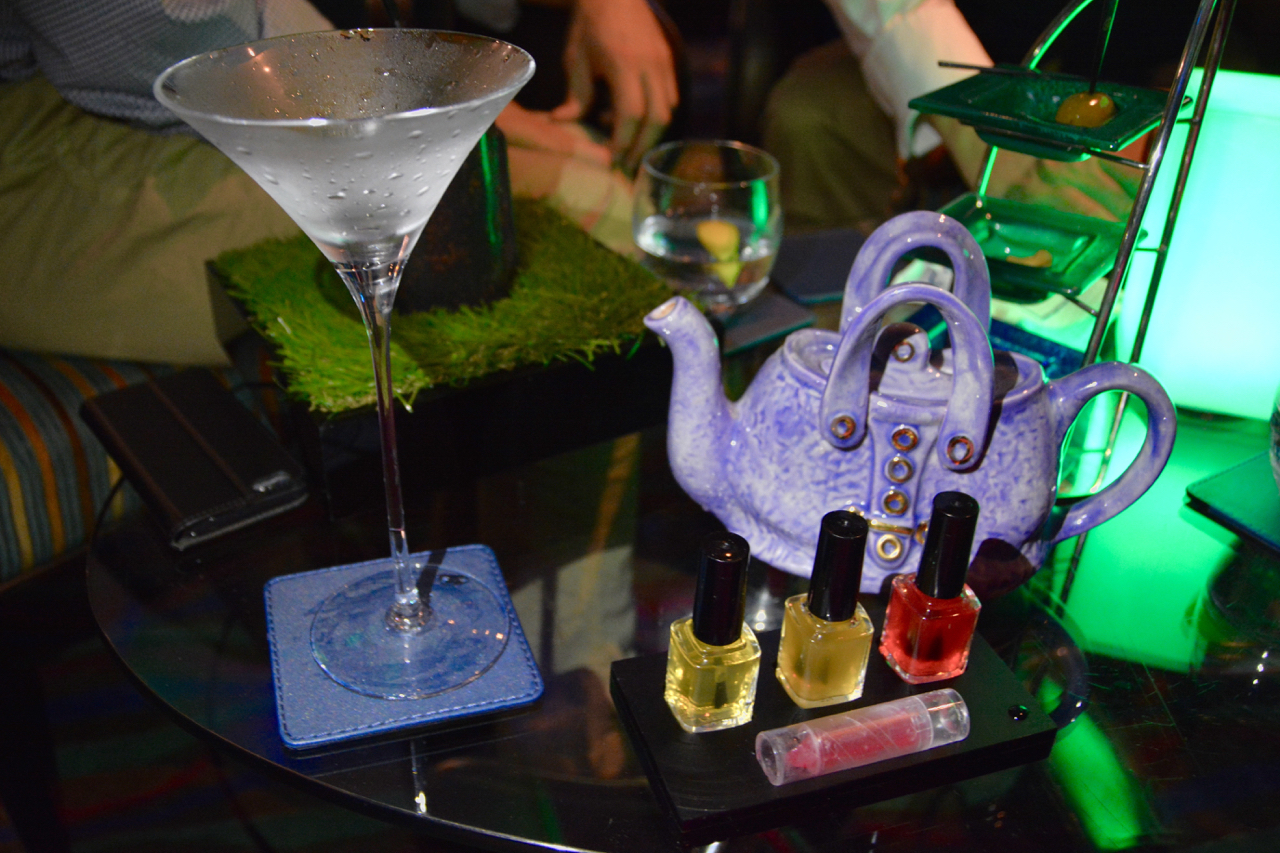 Speaking of drinks, high-end, imaginative cocktails are totally trendy in this Islamic Emirate. Perched on the 27th floor of the Burj Al Arab, with views over the Palm and Persian Gulf, is Skyview, where cocktails with names like Eyes Looking at Heaven and Mrs. Big are poured. An ode to Carrie Bradshaw, the Mrs. Big comes complete with three colors of ‘nail polish,’ a ‘lipstick,’ and ceramic ‘purse’ filled with a handcrafted cocktail. Another over-the-top bar is At.mosphere at Armani Hotel, on the 122nd floor of the Burj Khalifa. For a window seat, there’s a minimum spend of about $70 per person, which will get you almost two glasses of Veuve Clicquot, Yellow Label. 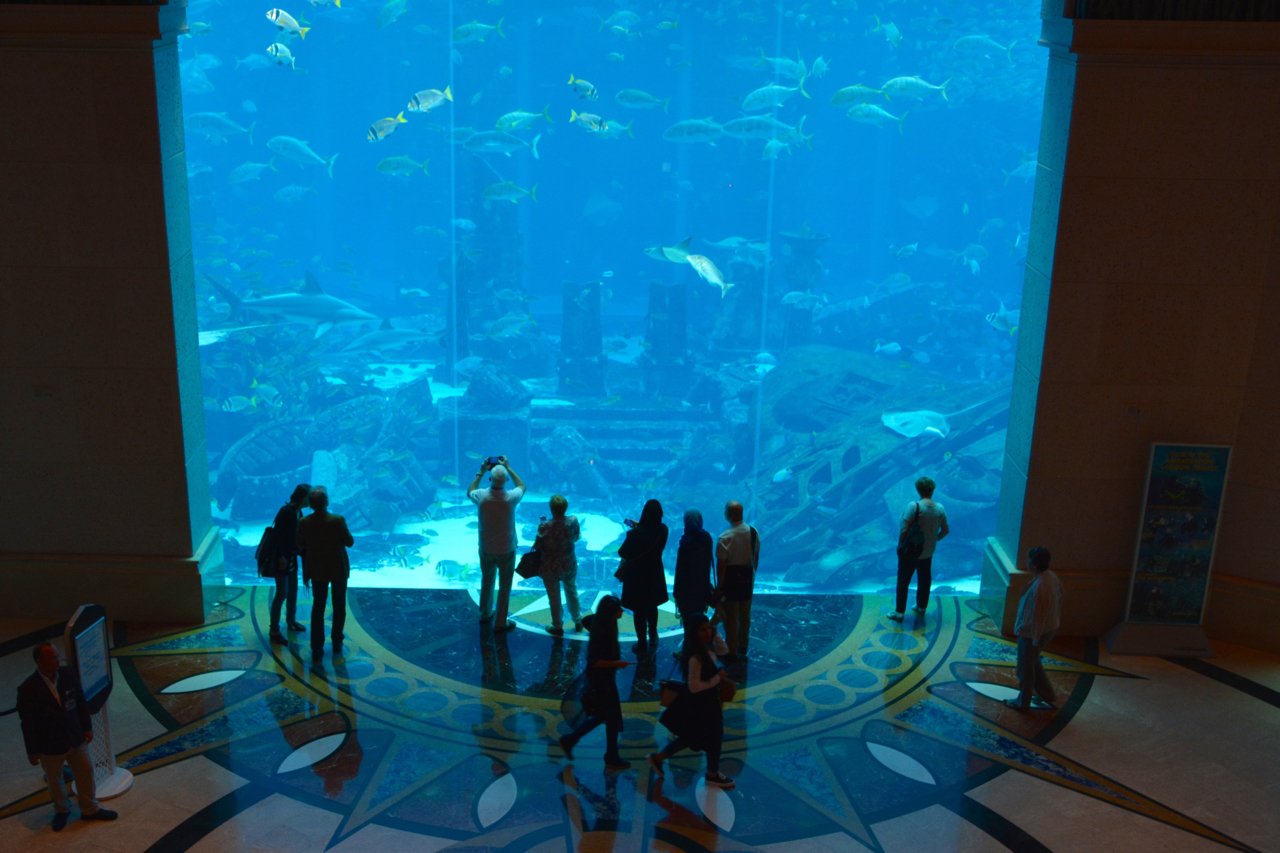 Even if you’re not a shopper, the Dubai malls are destinations in and of themselves. From a ski resort to a massive fish-filled aquarium, the countless number of luxury stores is secondary. Head over to the Palm and visit the Atlantis, a copy of the resort in the Bahamas, to see more marine life at its Lost Chambers Aquarium. Or beat the heat in the resort’s Adventure Waterpark. Basically, if you can imagine it, Dubai has already created it. 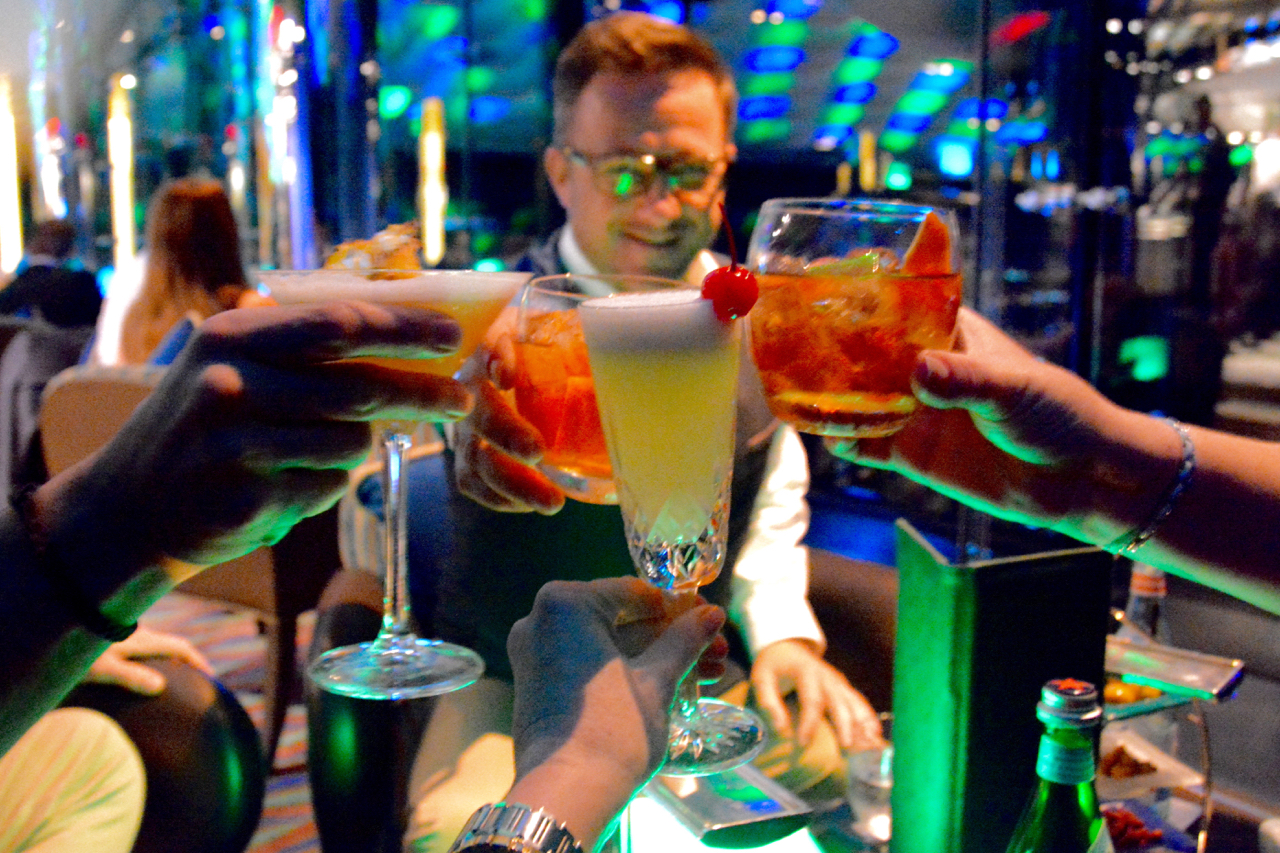 So, cheers to Dubai, a place where cultures collide, grandeur is the norm, and imagination is revered. As the price of oil fluctuates and the state of the world transforms, I’m constantly on the lookout for cheap flights to Dubai. In just a few decades, the city has morphed from desert to an architectural marvel. Odds are that Dubai will continue to change, enabling me to discover more surprising things about visiting Dubai. 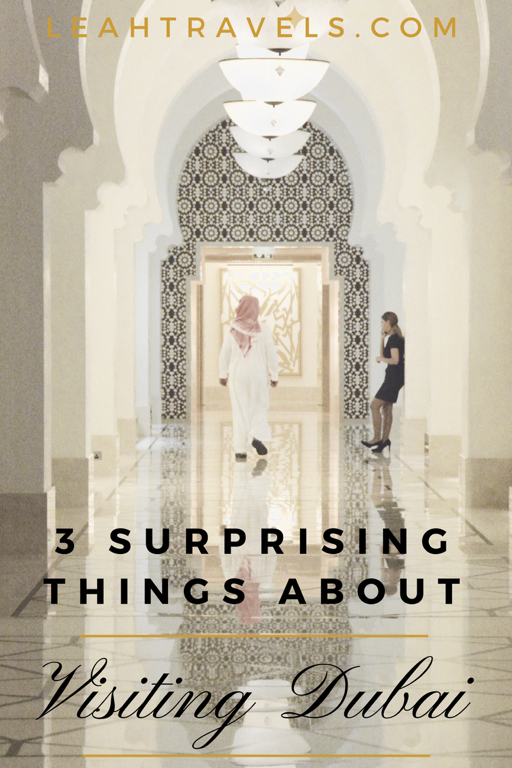