It isn’t often that I take an actual vacation, although if you follow me on social media, you likely think my entire existence is a holiday. Not so! In addition to the Leah Travels social media, blog {although that’s been neglected as of late}, and journalism writing, I also manage the social media for two brands, work as the editor for two blogs, and consult with brands working with new media. So, when Jennifer of Luxe Adventure Traveler asked if I’d be interested in visiting Oman, I jumped at the chance. After our road trip around Italy a few years ago, we’ve been looking for an opportunity to travel together again. AND, from everything I’d heard, Oman’s really got it going on! This decision was a total no-brainer. Are you oblivious about Oman? Oh, man! Visiting Oman is sure to move up on your travel priority list.

Oman as an Introduction to Middle East Travel

Traveling as a Westerner to the Middle East for the first time is exhilarating. The region is unlike any other place in the world. The unfamiliar sights, smells and sounds ignite the imagination. Though, because of cultural differences, Middle East travel can also be intimidating, especially for women. Wanting to be respectful of local culture is important, especially when visiting religious sites, but not all Middle Eastern countries are the same, especially in terms of tolerance. Lumping all the countries together not only is a disservice to the more tolerant countries, but also to would-be travelers who might be dissuaded from visiting.

Visiting Oman is not only a perfect introduction to Middle Eastern travel, but it’s also a must-visit for those who’ve traveled to the region previously. Geo-politically, it’s the most stable country in the region and has served as a mediator between Iran and the United States on several occasions. The Sultan of Oman, Qaboos bin Said al Said, has been in power since 1970, after overthrowing his father, with the aim of ending global isolation. Since coming into power, the sultan has used oil revenues to build schools, hospitals, roads, and other vital infrastructure. He’s established a national currency, abolished slavery, and encouraged private business growth. A few months ago, a new state-of-the-art airport was opened in Muscat, hoping to rival Dubai and Abu Dhabi as the regional hub. I spoke at great length to Omanis about the sultan and discovered that he is truly revered. In failing health, with no wife or heirs, concern abounds about the future of Oman.

Comparatively speaking, Oman is one of the more liberal Middle Eastern countries. In general, Omani women don’t have to cover their hair, and many do not. They do, however, dress modestly compared to Westerners. Though tolerant, it’s advised to cover the shoulders and knees as a visitor, which I did outside of the resorts. While swimming with locals in one of the wadis, I wore a bikini and wasn’t made to feel the least bit uncomfortable. As far as booze goes, it’s forbidden for Omanis to have alcohol, but is readily available at luxury hotels and resorts. Alcohol can be brought into the country via duty free shops, as well as purchased inside the Muscat airport.

At times, I felt as if Oman was the doppelganger for the desert mountains of West Texas. The Omani landscape was chiseled centuries ago and still feels untouched by humans, with a textured palate of varying shades of blues, greens, and tans. Oman boasts the highest mountain on the Arabian Peninsula, deep canyons, and even fjords. Mountains meet the Gulf of Oman and Arabian Sea, which feature clear water and some of the best opportunities for scuba diving {according to Jennifer}. Gazelles and goats graze freely. Dotting the landscape are patches of green–date palms, pomegranate fields, and rose gardens—that provide a respite from the shades of brown.

Swim in the Bimmah Sinkhole, with its beautiful teal water. Tucked between the sea and mountains, a dip in this limestone depression is uplifting. Nearby is Finz Beach, a study in contrast. The dry mountains fall into the Arabian Sea. The waves roll over the white beach, and the water is so clear that schools of fish can be seen looking down from the cliffs.

Wadi Shab is one of the Sultanate’s most popular spots for locals and visitors. It’s not easy to access, which helps keep the crowds at bay. It takes a short boat ride, a 45-minute hike, and a 15-minute swim just to get to the water-filled cave. Even in temperatures over 100 degrees, the trek is worth it. Locals swim next to tourists, while young men flip into the water from nearby cliffs.

A four-wheel drive vehicle is required to even access the steep and winding highway to Jabal Al Akhdar, known in English as Green Mountain. Not too long ago, this rugged area was forbidden to tourists, as well as Omanis that didn’t live there. Known for its rose water extraction, apricots, walnuts, pomegranates, and honeybees, this mostly undeveloped area of Oman is becoming the destination of choice for Middle Eastern royals, including the Amir of Qatar, who is building a massive compound. Previously, it was Prince Charles and Diana that helicoptered here.

Hike through Wadi al Bawaarid {cold water in Arabic}, which once was an overflowing river surrounded by waterfalls. It’s now bone-dry, driving all the honeybees away. Not too many years ago, this jagged area was once part of the area’s trading route. Locals used to carry fruit on their heads for seven hours from their farms to villages, often a 40-mile trip. While scaling the cliffs and ledges, you’ll pass pretty pink flowers used to make henna tattoo ink and happen upon the occasional watery oasis.

I didn’t get the chance to dune bash and sleep under the stars in Wahiba Sands. I also missed out on experiencing Salalah. Located in the Dhofar province, in the southern part of Oman, Salalah is said to be especially beautiful during the khareef {monsoon} season. Spanning from July to September, the heavy rains turn the region lush and waterfalls abound. The area surrounding Salalah is also home to the Land of Frankincense, UNESCO World Heritage site. It looks like I’ll be visiting Oman again soon.

Oman, and especially Muscat, is such a contrast. On one hand, it’s an ancient culture with a thousand-year history. The Bedouin traditions are felt in everyday life, and Muscat still thrives as a port city. Men wear pristine robes and kuma hats, and for special occasions, they tuck khanjars, which are traditional curved daggers, into their belts.

Despite this storied past, Oman also feels freshly minted, though not in the way of its neighbor to the north. Unlike glittering Dubai, Muscat has no high-rises. Yep, there are absolutely no buildings taller than eight stories, and that’s by design. The government also mandates that all buildings be white or cream and designed with Arabesque architecture. Perhaps the crown jewels of the city are the beautiful Sultan Qaboos Grand Mosque and Royal Opera House. To truly appreciate what this mandate has created, take a look from the mountains above Muscat. The aesthetic is more than pleasing to the eye.

Omanis are excited to share their country with visitors. They have a real sense of pride. The older generation has seen the transformation of Oman, and the younger generation is a product of globalization. Beyond their hospitality to outsiders, this pride is shown in more subtle ways. For instance, the entire country is pristine. Seriously, I saw no trace of trash or graffiti. Even the Mutrah Souq, which is Muscat’s most famous market, was litter-free. I’ve always thought it surely impossible to trash something you truly love.

Where to Stay in Oman

I must say that two of my favorite hotels in the world are in Oman. The Chedi in Muscat is the resort of Arabian dreams. Sandwiched between the rugged Al Hajar Mountains and brilliant Gulf of Oman, the Chedi is a luxurious escape within the city. I loved this hotel for awe-inspiring architecture and symmetry. The Long Pool {nearly 350-feet long!}, the spa’s relaxation room, and the Chedi Pool overlooking the sea are just a few of my favorite features. Book a Chedi Club Suite, and not only will you get a beautiful, large room, but also a host of amenities, such as access to the Club Lounge, as well as laundry service and mini bar included.

If you dare to take the highway to Jabal Al Akhdar then you’ll be rewarded with not only some of the most dramatic scenery in Oman, but also Anantara Al Jabal Al Akhdar. This is the highest five-star resort in the Middle East and is perched on a curving canyon rim. Given its location, of course it’s secluded, making this property an escape for the rich and famous of the region. Choose a villa, as it comes with its own private infinity pool overlooking the canyon. The villas also include binoculars for fully appreciating the view, as well as sketchpads on easels, if you’re so inclined. The Hammam-style bathroom raises the bar for all others, as does the hospitable staff. The spa is far more than you can imagine, and I do believe I had one of the top massages of all time at Anatara Jabal Al Akhdar.

If visiting Oman isn’t on your radar then it should be. If you’re looking for a taste of the Middle East, then this is your country. Tourism wise, it’s emerging, which is great for finding authentic experiences and essentially untouched areas. The Omanis are welcoming, extremely hospitable, and proficient in English. Oman is ripe for the picking, but get there before the rest of the world discovers what this Middle Eastern country has to offer. And when you do get there, make sure to stop for the popular karak chai, and hang out with the locals. It’ll be the best baisas that you’ll spend. 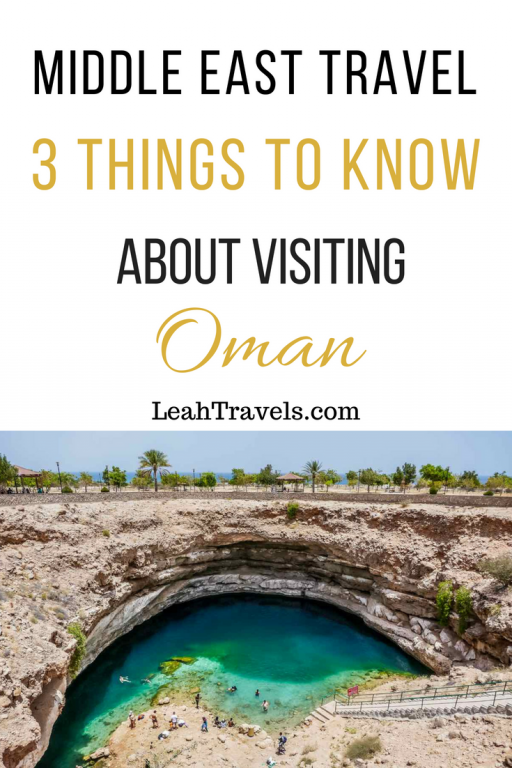