I’m beyond honored to welcome professional writer and photographer, Frank DiCesare to my little ‘ol blog. His work has appeared in National Geographic Traveler’s Intelligent Travel blog, The Boston Globe, Smithsonianmag.com, The Patriot Ledger, Acadiana Profile, Northeastern University Magazine, and Rhode Island Monthly. Most recently, Frank was published in the 2012 January/February issue of National Geographic Traveler, where he wrote of his search for London’s Abbey Road, which was made famous by the Beatles’ album of the same name.

A Quincy, Massachusetts native, Frank moved to Lake Charles, Louisiana in 2009. He’s been one of my biggest cheerleaders in both my writing and photography. Frank’s post is the second in my series of traveler reflections on the topic, “My Favorite Place on Earth.”  You’ll see that you can take the man out of New England, but you can’t take New England out of the man. So, without further ado… 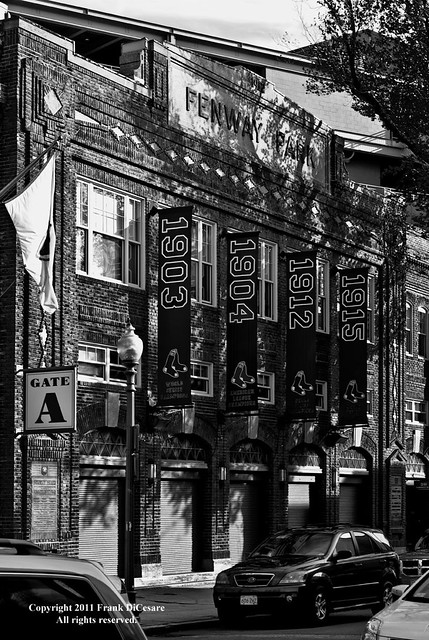 When contrasted to today’s modern-day baseball stadiums, with their retractable roofs, fan-shaped outfields, and sleek lines, Fenway Park looks more like a Euclidian nightmare. There’s nothing within its structure that evinces geometrical logic or smooth architectural design. It’s quirky, uneven, and misshaped. One look at its seating chart and you’d think the place was designed by three drunks after a night of revelry at the Cask ’n Flagon.

But Fenway Park wasn’t designed for mathematicians; it was built for dreamers. If you’re lucky, the dream begins in childhood, that early afternoon when your father escorts you up a dark ramp and your eyes fall on the field for the first time. The first thing you notice peeking behind all those dark seats is that immense stretch of green, that beautiful grass so meticulously kept it looks as if it has the texture of velvet when viewed from afar. Then the infield unfolds, with its coffee-colored dirt and gleaming white foul lines. You think of the sandlots where you play baseball and your mind flashes images of rusted backstops, splintered benches, and those canyons for batters’ boxes. Indeed, your first look at Fenway fosters an epiphany: This place is different; this is the Big League.

Moments later your ears perk up and you hear just how quiet Fenway Park is prior to a game, a reverential silence, like the minutes that precede a church service. You look out at home plate and spot a player taking batting practice. You watch his rhythmic swings and listen to the familiar cracking sound of a hit that echoes to the outfield.

When you reach your seat you stare out at the Green Monster, one of the most recognizable and daunting walls in all of sports. Standing 37 feet, two inches high, the Monster was built so the Red Sox brass could sell advertising. Old photos of Fenway show huge Depression-era ads spread across the Monster’s façade, pitching Gem blades for men, Vimms Vitamins – “The Red Sox take ’em daily!”, and Calvert Whiskey, an ad that featured an owl advising fans, Be wise – Clear Heads Choose Calvert, The Whiskey with the “Happy Blending”. Today more subtle ads for CVS Pharmacy, W.B. Mason, F.W. Webb, and Granite City Electric flank the Monster’s manually-operated scoreboard, one of the last of its kind still in use in Major League Baseball.

You notice, however, that the Monster is only 310 feet from home plate; it seems so close to where you are sitting. Television’s wide angle lenses often make Fenway Park look as if you could fit Logan Airport inside of it. But in your seat you begin to wonder if you too could hit one over the Monster.

Soon batting practice ends and Fenway begins to fill up with fans. The din of afternoon conversation begins to grow louder and louder as the ballpark’s seating capacity nears its limit. Anticipation wells deep within you; your first Red Sox game at Fenway Park is about to begin, and your heart beats with excitement. Minutes later, the Red Sox defense emerges from their dugout, scattering themselves like seeds across the field, as the Fenway Faithful erupts in applause. And though home plate umpires in the Major Leagues never really say it, a tacit and professional understanding abounds: It’s time to play ball!

Opened on April 20, 1912, Fenway Park will turn 100 this year, completing its first century of dreams both realized and shattered. And if you’re old enough to remember Bucky Dent’s three-run homer in 1978, you understand that Fenway is not just a place where baseball is played. It’s a ballpark more akin to a Shakespearean stage, where the fickle fates have been conjuring up joy and tragedy on scale so poetic that even the Bard of Avon would’ve struggled to keep up with his quill.

But Red Sox baseball is often a fickle business; the team has a history of winning and losing in such dramatic ways, etching memories like battle scars in the minds of their fans. Throughout its history, Fenway Park has stood as the veritable cathedral to those memories. It was for this reason, I believe, that a 1999 decision to tear down Fenway and replace it with a swanky new stadium along Boston’s waterfront was met with nothing less than vitriolic scorn. In the end, though, wiser heads prevailed. It was recognized that, for Red Sox fans, tearing down Fenway Park and relocating it anywhere other than Kenmore Square was like razing St. Peter’s Basilica and rebuilding it in Seattle.

Sure, Fenway’s old and quirky, with its ancient seats, lack of elbow room, and even greater lack of parking spaces. Nevertheless, it’s a ballpark that reflects the history and the dreams and the character of its home city better than any other sports venue in the world. The Yankees can have their new Yankee Stadium. (I’m sure the joint’s new stadium smell has long wafted away.) We Red Sox fans are tough enough to endure a little quirkiness for the memories of our fathers and grandfathers; we’ll happily trade easy transportation for tradition. For we cannot image Red Sox baseball — or perhaps even baseball itself — being played any place else.

Read about my favorite place on earth and the inspiration behind the idea here.