In order to fully appreciate visiting Texas, you must understand a few things first. So, here are ten tidbits that will help you make the most out of your trip:

Speaking, making eye contact, smiling, and waving doesn’t mean we’re trying to seduce you or sell you anything. 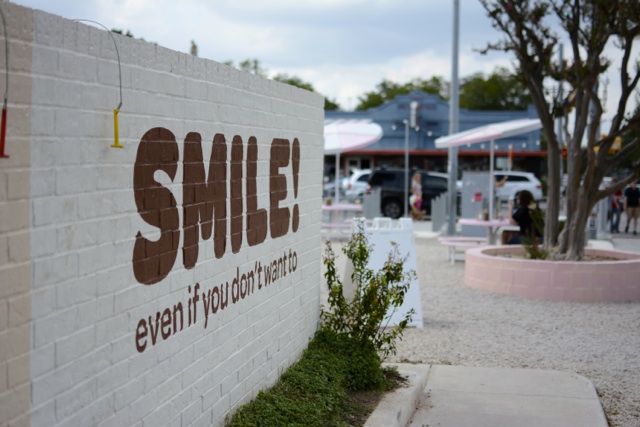 As a whole, Texans are a friendly bunch. We’re quick to say hello and ask how you’re doing. That’s more of a rhetorical question, and just our way of being polite. We hold store doors open for strangers and wave to passing cars on two-lane highways. Need directions or recommendations to the best Tex-Mex in town? Ask a Texan, but don’t be surprised if you suddenly have company for dinner. It’s just our way.

Don’t turn your nose up at gas station food. 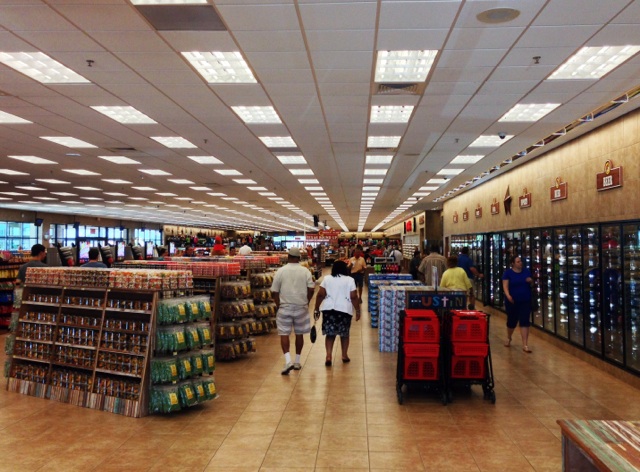 Convenience store cuisine in Texas is more than a bag of Nacho Cheese Doritos, ranch-flavored sunflower seeds, and a 64-ounce fountain Coke. When you’re seeking fried food paradise, look no further than the nearest gas station. When in the Panhandle, get an Allsup’s burrito; it’s golden fried cylinder of goodness. Don’t forget a handful of taco sauce with that order. The corny dog was invented in Texas, and you can’t go wrong with one of those from Stripes {formerly Town & Country} when in West Texas. And if you’re lucky enough to encounter a Buc-ee’s, you’d better stop. There are six flagship stores around Austin, San Antonio, and Houston. I tend to think they’re called ‘flagship stores’ because of their size. Each one is at least as big as Rhode Island and deserves its own Buc-ee Beaver flag and governing body. I dare you not to spend at least an hour in one and not ingest 1,752 calories.

Don’t utter the words pop or soda unless you want a strange look. 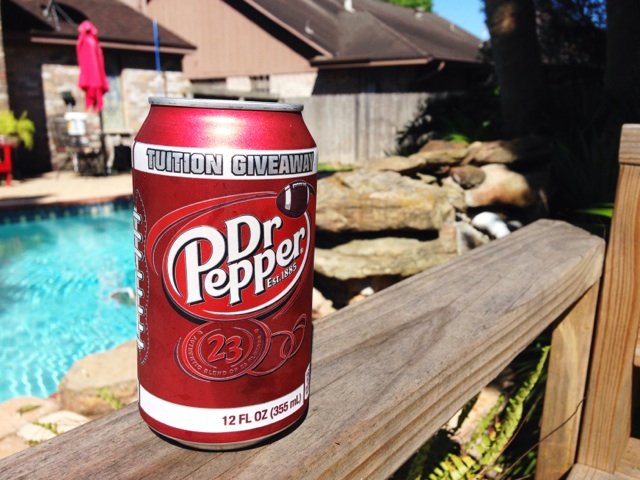 Nothing will give you away as a foreigner more than saying pop or soda when ordering carbonated beverages. Those things are called Cokes. It’s a generic term we use. I don’t care if you really want a Pepsi, 7-Up, Mountain Dew, or Sprite. They are all known as Cokes. The only time they’re not called Cokes is when you want a Dr Pepper. The Dr Pepper {don’t ever put a period after Dr} was invented in Waco and thus deserves a certain amount of respect.

Learning our pronunciation is essential for communication. 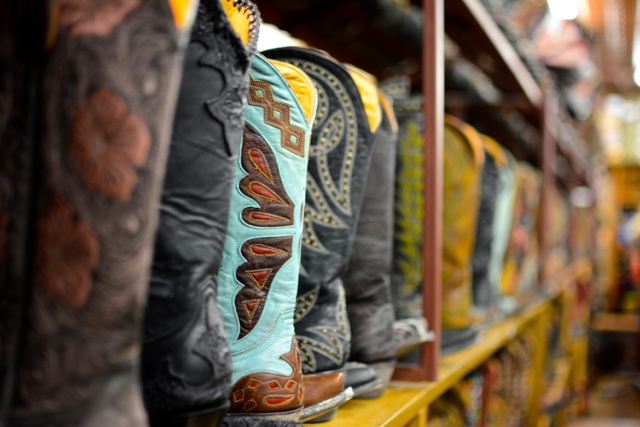 Texans are not fast talkers. We have a drawl that seems to turn two syllable words into three. To accommodate for our slow speech pattern, we tend to combine words or just drop the endings. We apparently don’t care for the letter g on the end of words. Take for instance these bastardized Texan words: fixin’ {fixing}, gonna’ {going}, nuttin’ {nothing} and sumpin’ {something}. Often times we simply make up our own words—libel’ta {likely to}, piddlee’o {an adjective meaning something small}, and ja’eatyet {did you eat yet}.

We don’t measure distance in miles, but rather time. 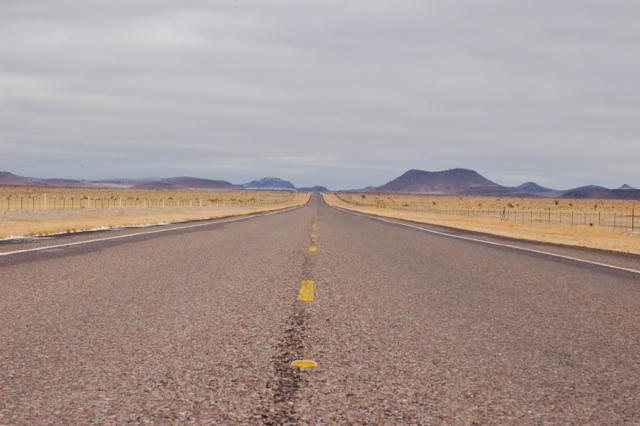 Texas includes 7.4% of the nation’s total area. El Paso in West Texas is closer to California than it is to Beaumont in East Texas. King Ranch in South Texas is bigger than Rhode Island. Brewster County in West Texas is larger than the entire state of Connecticut. Texas is larger than France. Driving in Texas is not only necessary, but a big part of our culture. So, you want to know how far it is from Houston to Austin? It’s about three hours, unless you stop at the flagship Buc-ee’s in Bastrop.

Whataburger is the alpha and omega of hamburgers. Amen.

The orange and white striped A-frame building is like a beacon in the night to millions of hungry Texans. I laugh in the face of folks who swoon over White Castle or In-N-Out Burger. Obviously they haven’t yet tried a Whataburger or heard that there are 36,864 ways to customize one. The food is so good that HEB {my favorite Texas-founded grocery store—sorry Whole Foods} sells Whataburger fries, mustard, ketchup, and the best condiment invention since Tabasco—spicy ketchup. I might also add that Whataburgers are open 24-hours a day, and thus ideal for an after-bar burger rendezvous. Don’t leave Texas without trying one. 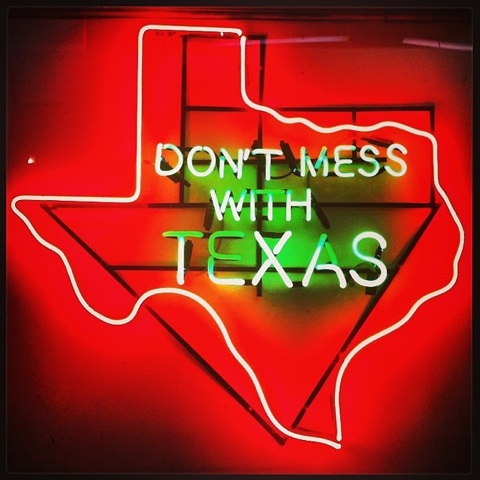 It takes a Texan ten minutes to tell a five-minute story. It’s not just because we talk slowly, but also because we’re very much into our expressions. Here are a few common phrases:

This ain’t my first rodeo.

Rode hard and put up wet

Dumb as a box of rocks

Busier than a $2 whore on nickel night

Useless as tits on a boar

Madder than a wet hen

Bless your heart {Can’t believe I forgot this one! Thanks, Donna.}

I suggest dusting off those eighth grade English skills and use context clues to figure out what we’re talking about. If that doesn’t work then just ask. We’ll certainly take amusement in explaining.

Chicken fried steak is not poultry. 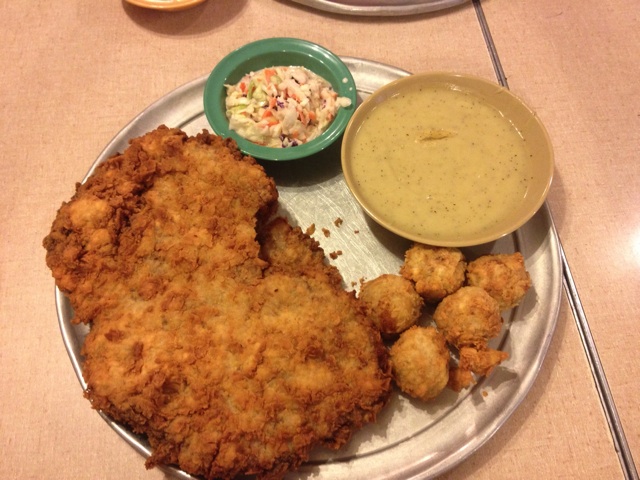 The state dish of Texas may be chili, but the chicken fried steak, simply known as CFS, is probably the most beloved meal. It can be found from cafés to high-end restaurants in big cities and small towns. What is a CFS? It’s wiener schnitzel’s first cousin.

Take a piece of steak and pound it senseless or until it’s about ¼ inch thin. Dredge it in flour seasoned with salt and pepper. Then dip it in an egg and milk wash. Repeat this process twice and then throw it in a skillet with hot oil. Fry it on both sides and then cover the CFS with cream gravy. Serve it with a side of mashed potatoes and fried okra and you’ve got yourself the Texas version of comfort food.

Kolaches and tacos—it’s what’s for breakfast

Forget IHOP, Denny’s, Dunkin’ Doughnuts, and the Waffle House. When you’re in Texas, that dog won’t hunt {See what I did there?}. Thanks to our Czech and Mexican influences, we have kolaches and tacos for breakfast. 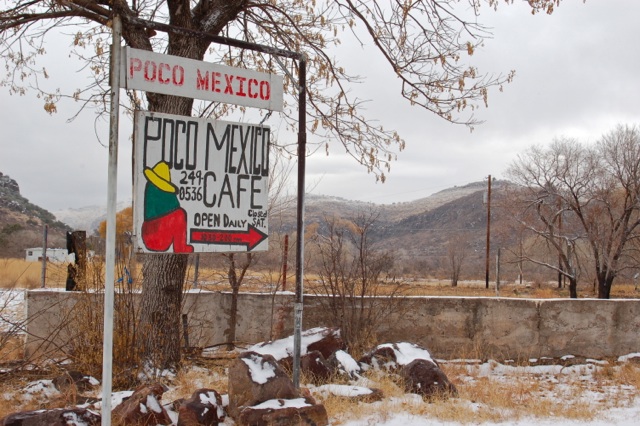 You can find a breakfast taco anywhere in the state, from mom and pop taquerias to fast food joints like Taco Cabana {a Texas chain that obliterates Taco Bell}, Sonic, and Whataburger. The concept is simple: flour tortilla, scrambled eggs, and anything else you’d like thrown in. In West Texas and the Panhandle, they often are breakfast burritos, which are the same thing, only larger. 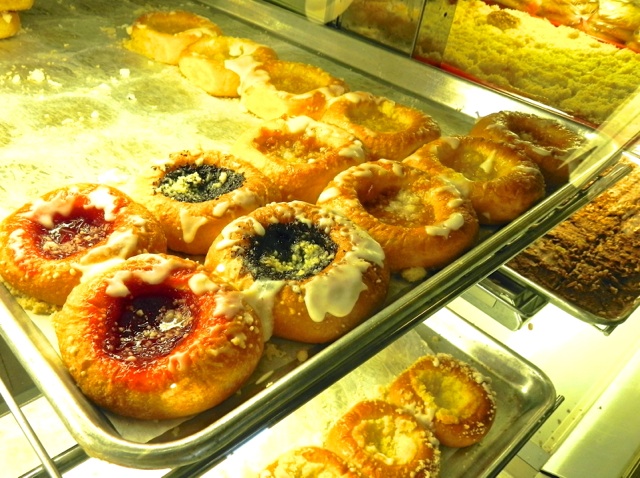 The devotion to kolaches has spawned chains like the Kolache Factory, which is great when you’re in an urban area. However, along the highways and in small towns is where you’ll find the most delicious kolaches. Central Texas gas stations double as bakeries {another reason why our gas stations are the best}, with my favorite being Hruska’s in tiny Ellinger. Though, the most well known place for kolaches in the state is probably the Czech Stop in the town of West. It’s so beloved that after a recent massive explosion occurred in West, the second question everyone asked was “Is the Czech Stop still there?” Seriously.

For more information on the great Texas kolache, Czech out this article.

When it comes to bar-b-que, beef is boss. 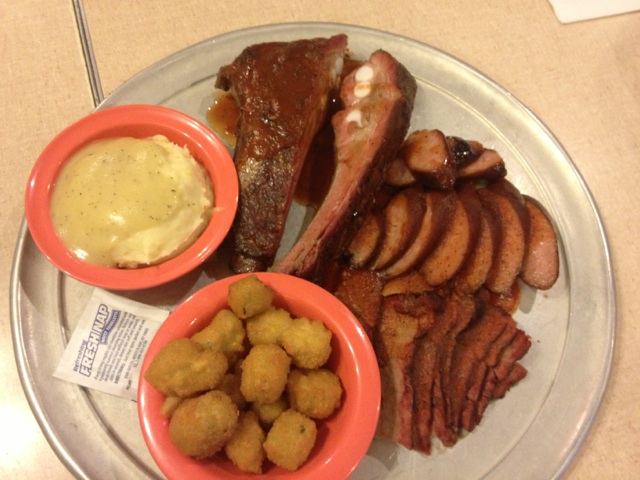 In Texas, we love our beef, but that’s not to say that we discriminate against other delicious proteins. Bar-b-que is actually a cooking method that involves meat being smoked over wood at low temperatures. Any and all meat can be deemed bar-b-que in Texas, as long as its been smoked over mesquite, oak, or the like. Turkey, chicken, sausage, pork, and cabrito {that’s goat in Spanish}, are also available on menus.

With that being said, if you’ve eaten bar-b-que in Kansas City, Memphis, or the Carolinas, then you haven’t really had bar-b-que. In Texas, beef is boss and pork is a minion. We don’t have pulled pork and our ribs are rarely baby back. Pork is used in sausage, but that’s just about it. Beef brisket is far-and-away the most popular and beloved item on any menu. Sliced brisket is standard, as is a chopped brisket sandwich. Here’s a tip: Just get a three-meat plate and try a little bit of everything. It’s hard to go wrong with bar-b-que in Texas, especially in Central Texas.

This easily could be a ten-part series, as we Texans are a unique bunch with a culture all our own. We’re not Southerners and we’re not Western. We’re simply Texan. I believe the great writer, John Steinbeck, described us best:

“I have said that Texas is a state of mind, but I think it is more than that. It is a mystique closely approximating a religion. And this is true to the extent that people either passionately love Texas or passionately hate it and, as in other religions, few people dare to inspect it for fear of losing their bearings in mystery or paradox. But I think there will be little quarrel with my feeling that Texas is one thing. For all its enormous range of space, climate, and physical appearance, and for all the internal squabbles, contentions, and strivings, Texas has a tight cohesiveness perhaps stronger than any other section of America. Rich, poor, Panhandle, Gulf, city, country, Texas is the obsession, the proper study, and the passionate possession of all Texans.” 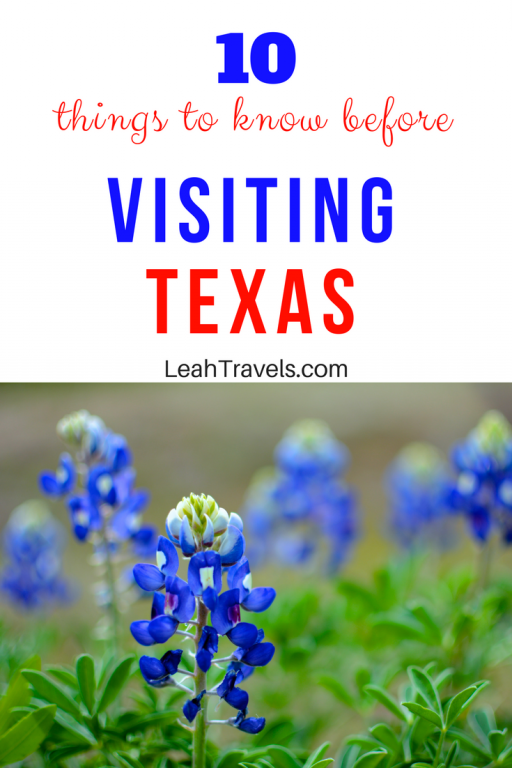 Should I Stay or Should I Go: A Trip of a Lifetime Update