In my mind there’s nothing more quintessentially Texan than bellying up to the table for a big ol’ meat feast. Add beer, mustard-based potato salad, cole slaw, beans, white bread, and fruit cobbler and you have a picture of any given weekend in Texas. 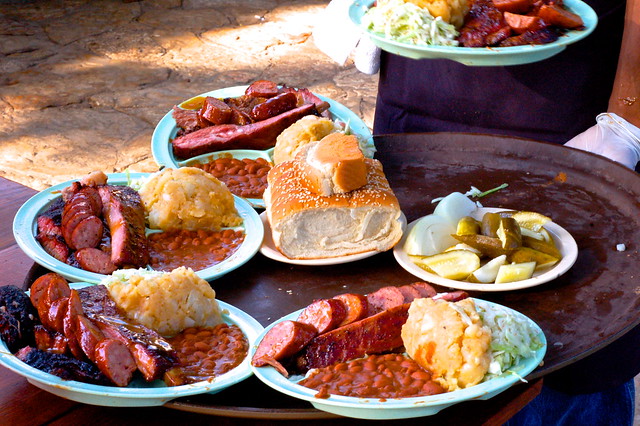 Perhaps you’re thinking, “I’ve had bar-b-que before. What makes it so great in Texas?” Well, if you’re basing your knowledge on what you’ve eaten in Kansas City, Memphis, North Carolina, or any other place famous for their bar-b-que, then you haven’t a clue what Texas bar-b-que is about. Things are a bit different in the Lone Star state. Let’s put it this way, you’ll likely starve if searching for a pulled-pork sandwich. 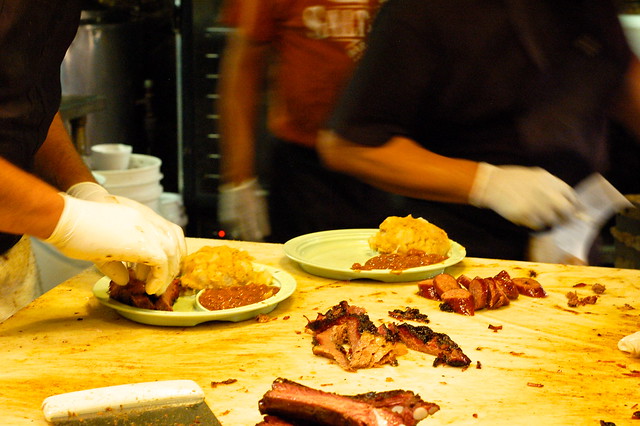 In Texas, beef is king.

Oh, you’ll find the occasional pork ribs {they really are the best kind}, but most Texas bar-b-que menus offer brontosaurus-sized beef ribs, and brisket is far-and-away the most popular item on any menu. Instead of pulled pork sandwiches, Texas has chopped beef. Brisket is beaten within an inch of its life and piled high onto a hamburger bun. Add raw onions, pickles, and sauce as you see fit. Some Texan bar-b-que places will also offer steaks. Prime rib, rib eye, and even T-bone steaks are cooked in the same fashion as the brisket and ribs.

We love our beef, but that’s not to say that there is no other type of meat to be had in Texas. Bar-b-que is actually a cooking method that involves meat being smoked over wood at low temperatures. Any and all meat can be deemed bar-b-que in Texas, as long as its been smoked over mesquite, oak, or the like. Turkey, chicken, sausage, pork, and cabrito {that’s goat in Spanish}, are often just as common as beef. 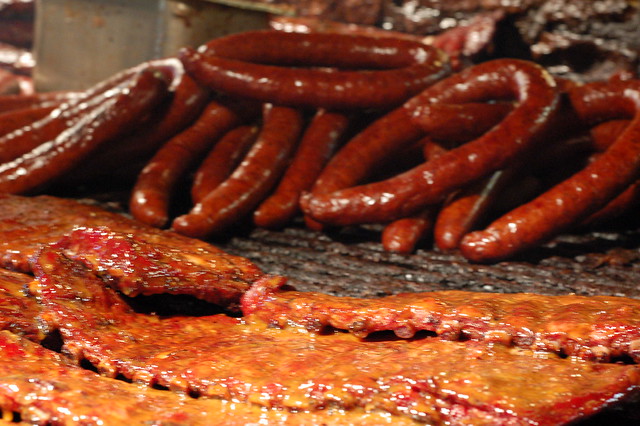 As you probably know {because we can’t help but remind everyone}, Texas is a huge place. It’s as diverse in its landscape as it is in its culture and influences. Therefore, just because you’ve had bar-b-que in the dry plains of West Texas with it’s Mexican and Southwestern influences doesn’t mean that the meat will taste the same as in the humid Piney Woods of East Texas.

The bar-b-que that I love most is found in Central Texas with its German and Czech influences. There the meat is smoked and dry rubbed with spices; sauce is only applied after the smoking process is complete {just as it should be}.

If you ask 100 Texans what their favorite bar-b-que place is you’re likely to get 100 different answers. Taste is such a subjective thing, but I never hesitate giving my opinion on food, especially when it comes to Mexican and bar-b-que. Go to these spots for the best bar-b-que in Central Texas.

I must admit that Cooper’s is my absolute favorite bar-b-que in the whole wide world. Really. I’ve had plenty others that are good, but nothing even comes close to Cooper’s. I was friends with the owner’s son in college, and when my family found that out, they started some sort of arranged marriage scheme before even meeting him. That’s how good this place is.

Before getting out of the car, you can smell the deliciousness awaiting. The pits are located just outside the entrance; that’s where you’ll pick your meat. Choose from brisket, pork chops, sausage, steak, chicken, turkey, cabrito, and beef ribs. It’s a carnivore’s dream. After making your selection, take your meat into the restaurant for weighing and slicing. There you’ll find coleslaw, potato salad, corn, and cobbler.

After paying, find a seat. It’s communal seating, so just squeeze in somewhere. Beans, jalapenos, onions, bread, and pickles are all available for free. Grab a piece of butcher paper and silverware and dig in. But don’t forget the sauce! I could write a song about this sauce. It’s not a typical thick ketchup-type sauce. It’s more of a liquid; you could drink it if you like. And you’ll want to. I have.

You used to have to go to Llano if you wanted Cooper’s, but now there are locations in New Braunfels and the Stockyards of Ft. Worth. Anytime I’m within an hour of a Cooper’s I make it a point to visit. It’s definitely worth the detour. 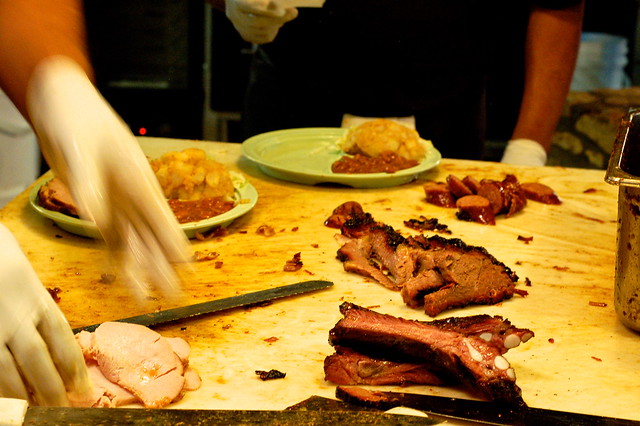 Honestly, all of my other picks are not ranked. They’re just great substitutes for when I can’t get to Cooper’s.

When I’m driving along Highway 71 from Austin to my family’s home in Marble Falls, I often find myself stopping at Opie’s in the tiny “town” of Spicewood. The brisket is tender and good. The jalapeno sausage will light you up, and that’s just how I like it. The thing I really enjoy about Opie’s is their creative sides. Along with the typical beans, cole slaw, and potato salad, Opie’s has tater tot casserole and spicy corn. I haven’t run across any other place with those particular sides, and I think they’re certainly worth stopping for. And if you needed another ringing endorsement, Forbes recently named it as one of the 5 best BBQ joints for an all-American road trip. 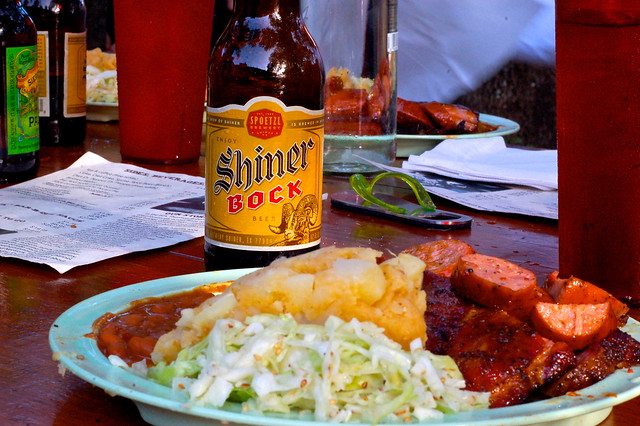 I don’t think you can watch a program on the Travel Channel or the Food Network about Austin or bar-b-que in general without the host going to The Salt Lick. Located in Driftwood, about 25 minutes outside of Austin, this perennial popular spot is the place to go for an over-the-top, Texas-sized dining experience. The smell of smoke and meat can be detected a mile before even arriving. The parking lot alone could use its own traffic light. On the weekends there are even shuttles that pick people up in the parking lot and deliver them to the entrance. The scope and size of The Salt Lick even causes this Texan to shake her head. 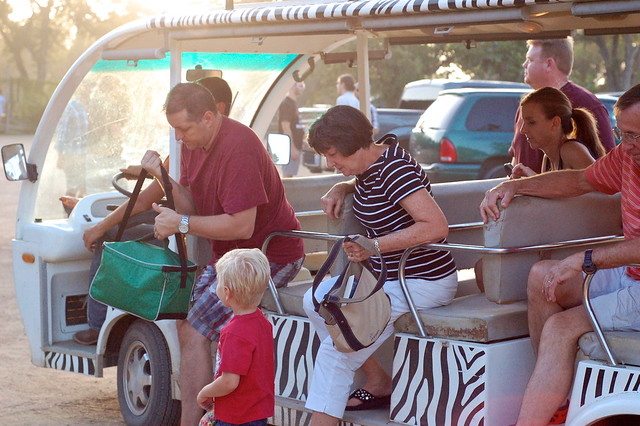 I’ve never been to The Salt Lick when there wasn’t at least an hour’s wait. For me, going to The Salt Lick isn’t really about the food. It’s more about the experience. That’s not to say that the food isn’t delicious. It is! It’s just not the place I’d make a pilgrimage to if I didn’t have Salt Lick virgins in tow. 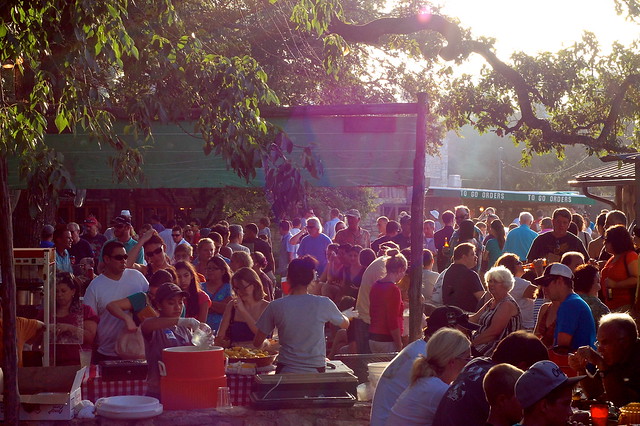 Here are some tips to make your experience at The Salt Lick the best possible: 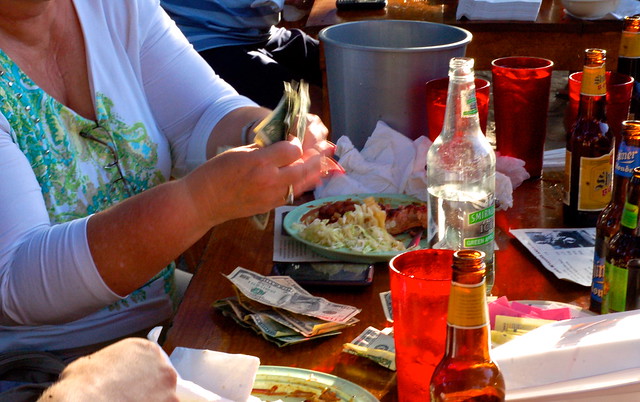 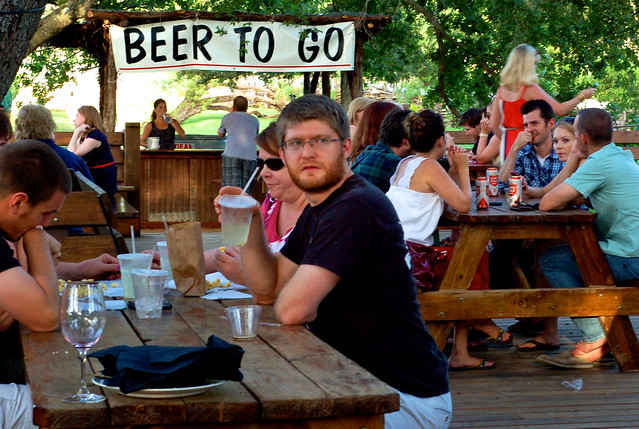 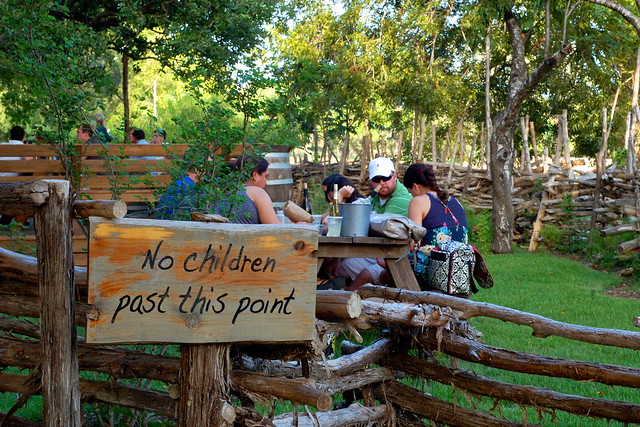 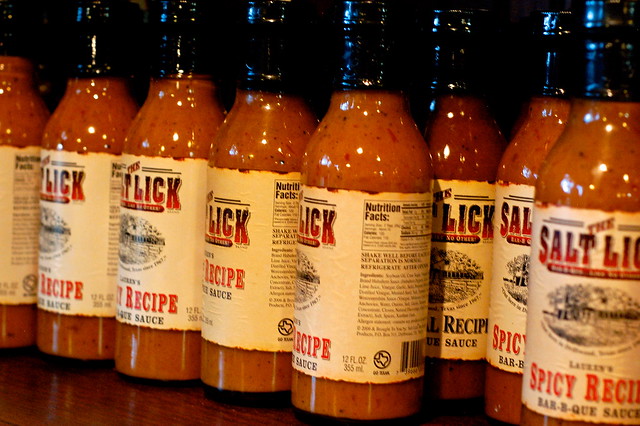 On my most recent visit I had Thurman’s Choice, which includes brisket, pork ribs, sausage, potato salad, beans, cole slaw, and homemade bread. Let’s just say that over-all, I had a wonderful time. I exposed the aforementioned Yankee and California-types to a slice of  Texas life, ate a fantastic meal, and I found $40 on the ground. I’d say that was a successful evening. 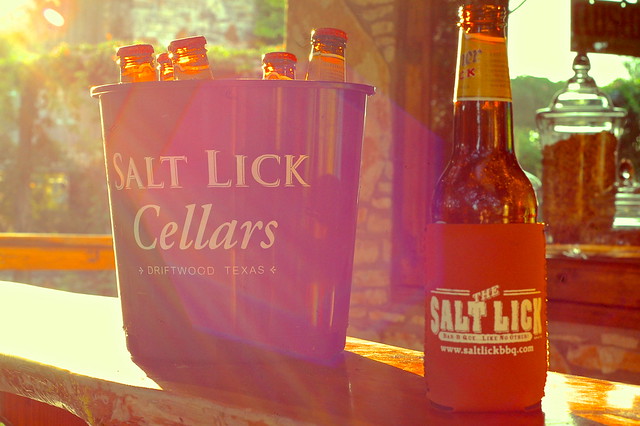 Alright, so Lockhart isn’t the name of a particular bar-b-que restaurant, instead it’s town 30 miles due south of Austin. It’s also known as the “Bar-b-que Capital of Texas”.  This is another one of the Food Network and Travel Channel’s favorite spots to feature.  Look, I’m not even going to attempt to pick the best bar-b-que in Lockhart. It might must start some sort of bar-b-que holy war, and I certainly don’t want that on my conscience. 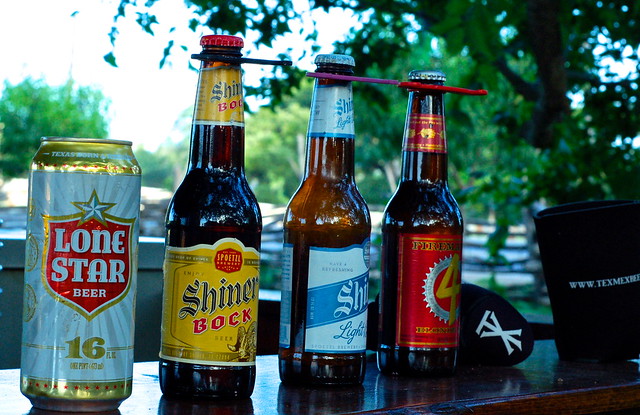 Here are the main contenders: 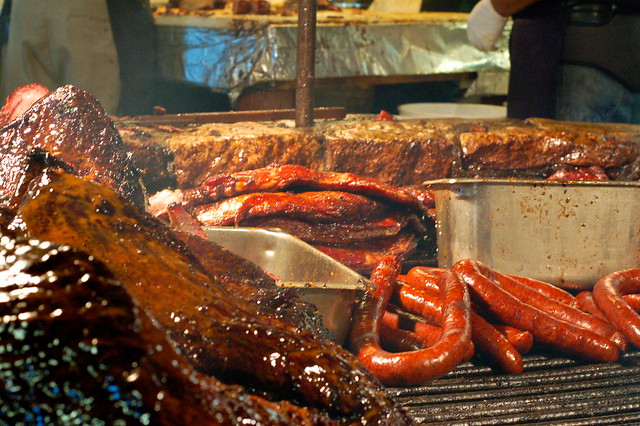 So, I could write an e-book about all the great Central Texas places to eat bar-b-que…Snow’s in Lexington, Inman’s Ranch House and Holy Smokes BBQ in Marble Falls, Louie Mueller in Taylor…the list is a mile long. And as I mentioned before, taste is subjective, but I don’t think you can go wrong with any of the places I’ve mentioned. Each have their own unique spice blends, sauce recipes, and atmosphere.

The bottom line is that you can’t say you’ve had bar-b-que until you’ve eaten it in Texas. 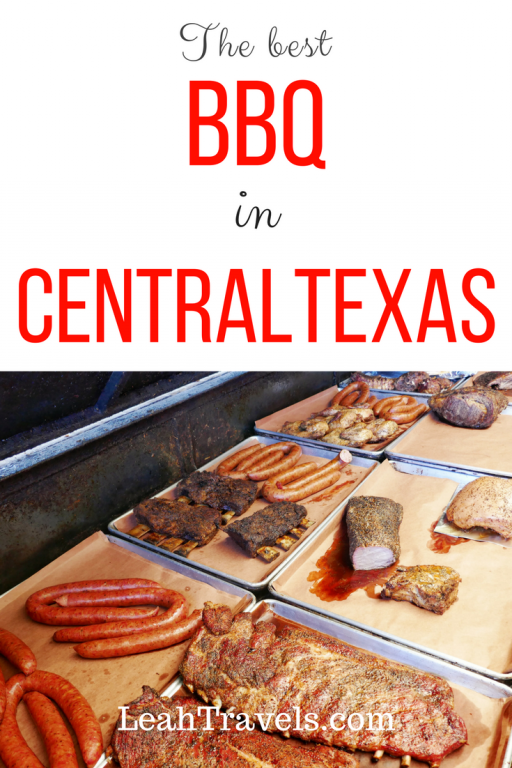 All of these photos were taken by me in August 2012 at The Salt Lick in Driftwood, Texas. No Yankees or California-types were harmed in the taking of these pictures.