The word ‘hiking’ isn’t one that is often seen on this site, but when in Honolulu, it’s something that just must be done. 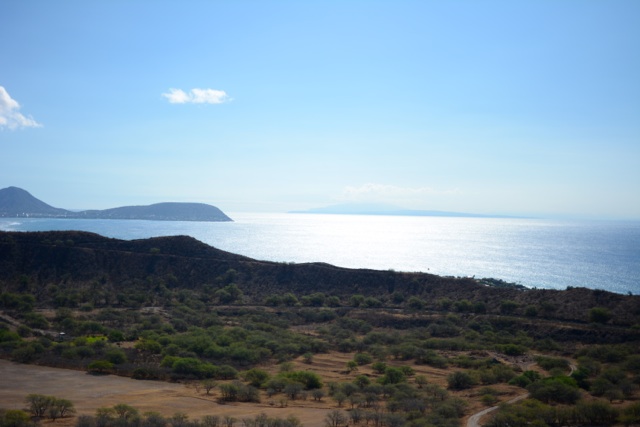 Also known as Mount Leahi, this symbol of O’ahu was created over 150,000 years ago from a single eruption. Nearly a perfect circle, Diamond Head Crater is 760 feet high and has a diameter of 3,520 feet. The area has had many uses, including an ancient place of worship and a military fort that protected the island from an ocean attack. Now, it’s a state park that offers some of the best views of Waikiki Beach, Honolulu, and the Pacific Ocean. 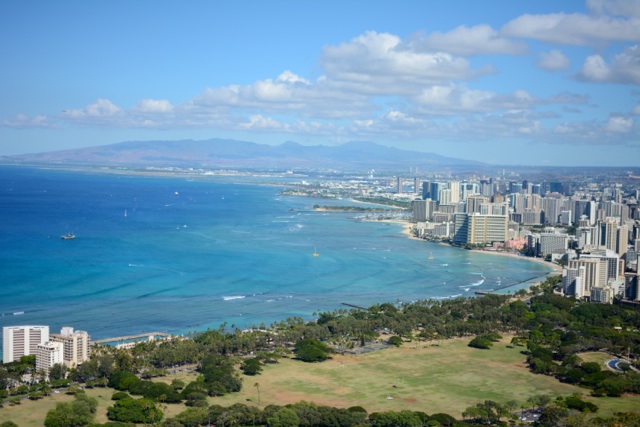 It’s safe to say that I’m not going to be mistaken for a serious hiker. I’m not a REI Member, but I have found that the most beautiful places often require a bit of sweat and burning quadriceps in order to see. I’ve hiked near Mt. Cook in New Zealand and the Dana Nature Reserve in Jordan. Both times I was rewarded with spectacular sites, and I figured that Diamond Head would be no different. I was right. 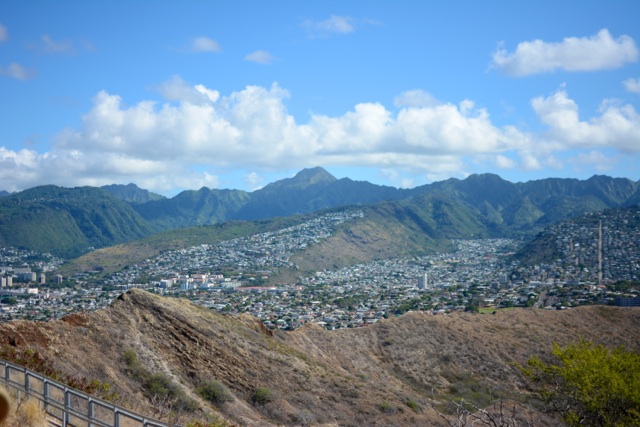 I suppose easy is a relative term when it comes to any sort of activity. It obviously depends on your fitness level, but I would classify the hike to the top of Diamond Head between easy and moderate. I did see 70-year-olds and five-year-olds making their way up to the top. Before I set out, I read to allow 2-3 hours for a return. It took me one hour, but I was walking at a brisk pace. Quite frankly, I knew if I stopped that I might not get started again. If you decide to hike to the top of Diamond Head Crater {and you should}, I have some helpful advice and information that I wish I’d known.

Prepare for the Heat

I forgot to bring my backpack to Hawaii. Had I remembered, I would have been loaded down with sunscreen, water, and probably an oxygen tank. Instead, I resorted to tucking my car key in my sports bra, strapping my DSLR around my shoulder, and keeping a firm grip on my iPhone. I had no water or hat; I was grossly unprepared. 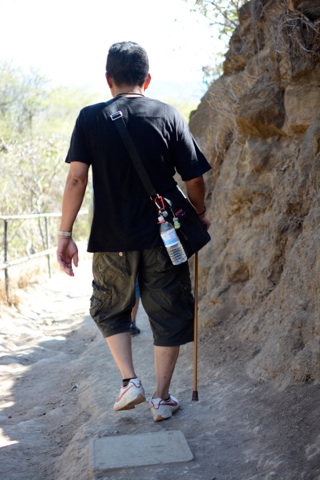 The sad thing is that I was still better off than many of the other visitors wearing flip-flops and walking around with shave ice. Yes, that really did happen.

Know this: The area near the restrooms is the last place to get water. Diamond Head is not a golf course and doesn’t have giant, 10-gallon coolers full of iced water every 100 feet.

Prepare for the Terrain 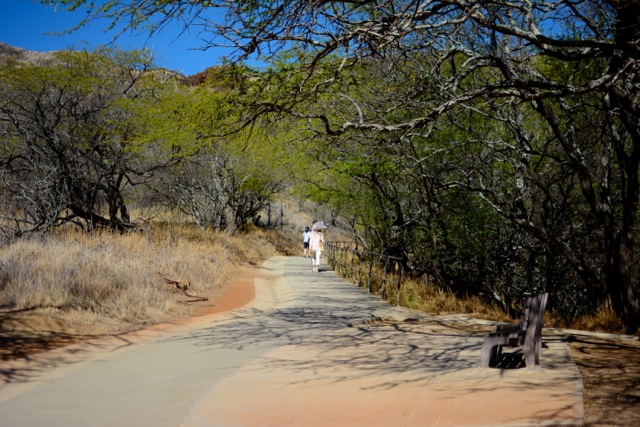 The trail starts off paved with a slight grade. Don’t let that fool you. The rest of the way isn’t going to be like that.  In fact, the path to the top has more turns than a doorknob. Combine the ever-increasing grade with the unlevel path, and you have a recipe for disaster. In fact, I saw two people fall. 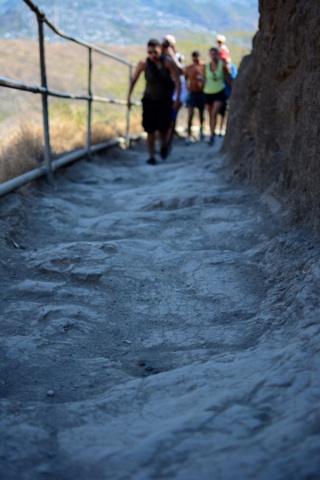 There is a rail to hold on to the entire way. If you’re the least bit clumsy or have balance issues then I’d suggest holding on to the rail.

Know this: Accidents tend to happen when tired or rushed. It’s not a race to the top, so rest as needed at any of the benches or look out points just off the trail.

Prepare for the Stairs and Tunnel 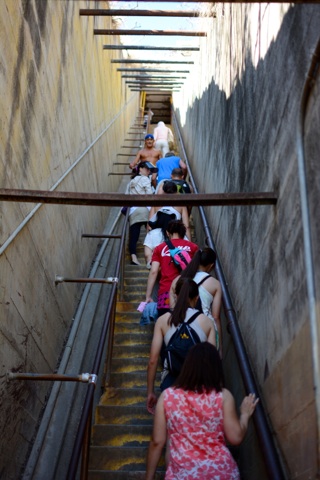 Forget the steps at the Philadelphia Museum of Art. If Rocky Balboa really wanted to get in championship shape he should have come to Diamond Head. After the series of switchbacks along an uneven path, visitors are then faced with a series of steps. There are 74 steps that lead into a small, somewhat lighted tunnel. I can see the narrow, 225-foot tunnel being a slight issue for someone who is claustrophobic. 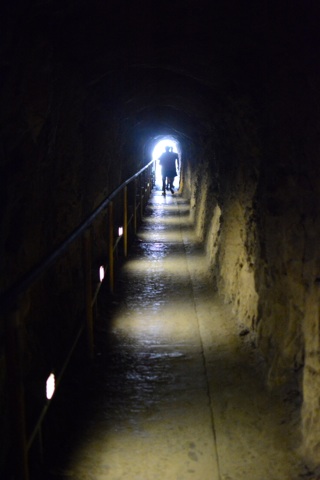 Once you emerge from the darkness, there is an imposing set of 99 steps that lead to the lowest level of the Fire Control Station. To the left there is a path that leads to a lookout point on the rim of the crater. Before reaching the rim, there are 82 more steps that lead to the edge of the crater rim. From there, the trail takes you to the summit, after another 54 more steps. 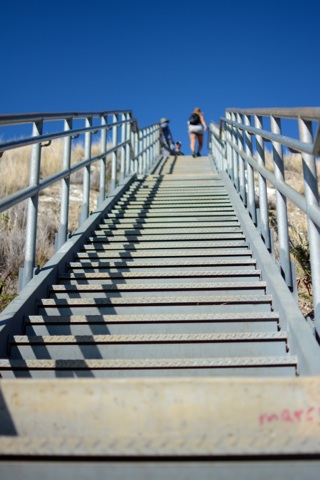 Know this: Instead of climbing those 99 steps and being bottlenecked with the throng of visitors, take the path to the left. Not only is there a better view, but also a nice breeze coming off of the Pacific.

Prepare for the Visitors 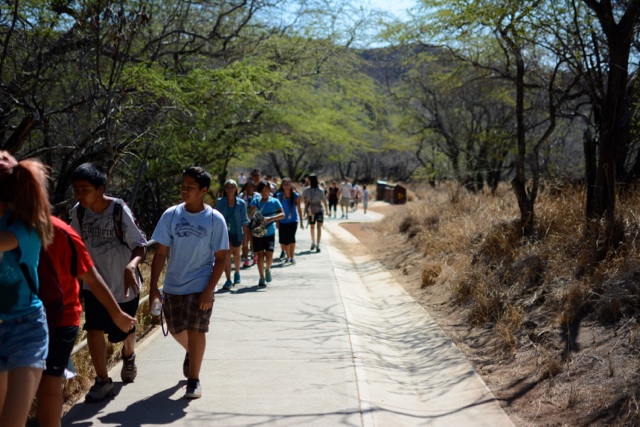 The way see it, hiking Diamond Head is a lot like driving. The earlier you get on the trail the less traffic there will be, which makes for a far more enjoyable experience. I went at 8:30 and should have been there about an hour earlier. As I was making my way down, there were school trips and tour buses making their way up the trail. I’m so glad I missed that.

Slower traffic should keep right. Just like on the highway, those who are moving at a more leisurely pace should stay to the right {exception for those who need the rail}. Since the path is not very wide and there are people going up and down, single file is advisable. I realize you’d like to walk alongside your girlfriend and gossip, but there’s just no room for that. 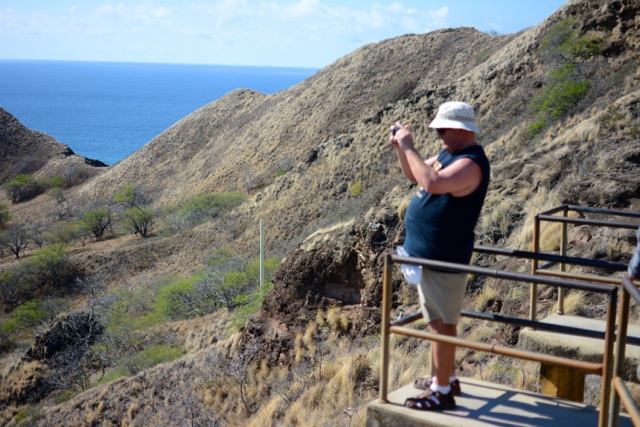 Know this: It’s easy to get caught up in the beauty of your surroundings, but it’s important to remember that you’re sharing this experience with a lot of other people. Be polite to those around you. Take your photographs and then move along so others can get theirs, too. 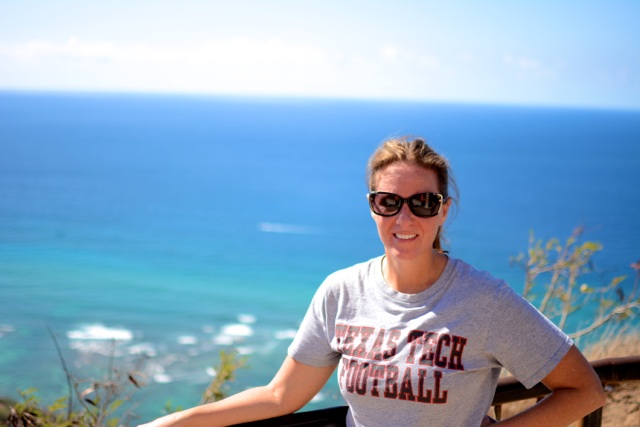 I would absolutely hike Diamond Head again, if only for the exercise. The view from the top is the reward that draws thousands of visitors each year. After all, there’s more to O’ahu than beautiful beaches and shopping in Waikiki. Sometimes it just takes a change of altitude to see it. 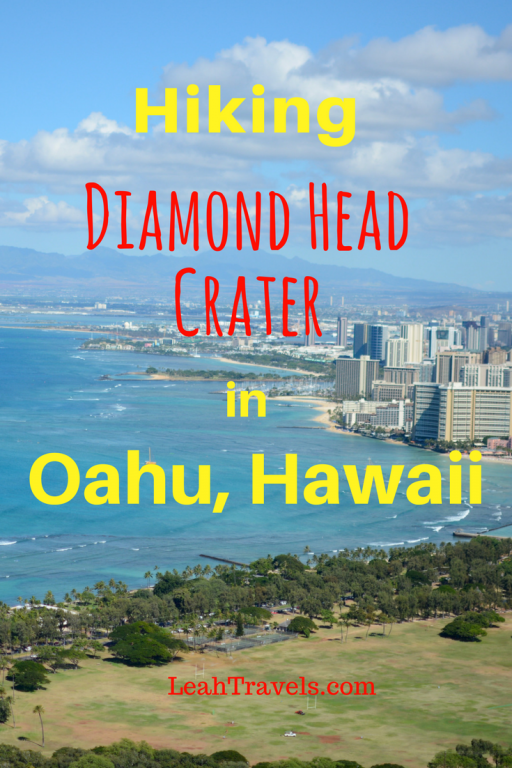 I was a guest of the O’ahu Visitors Bureau. In no way was I swayed to write a positive review based on the bathtub-warm water, silk-like sand, or the copious amount of kindness shown. As always, opinions are mine.

Money Saving Tips for Paris {or Any City}