The Sunday morning of December 7, 1941 started like every other day on the Hawaiian island of O’ahu. That quickly changed shortly before 8:00 am. Without warning, Japanese forces launched an air attack on the U.S. military base of Pearl Harbor located on Ford Island. 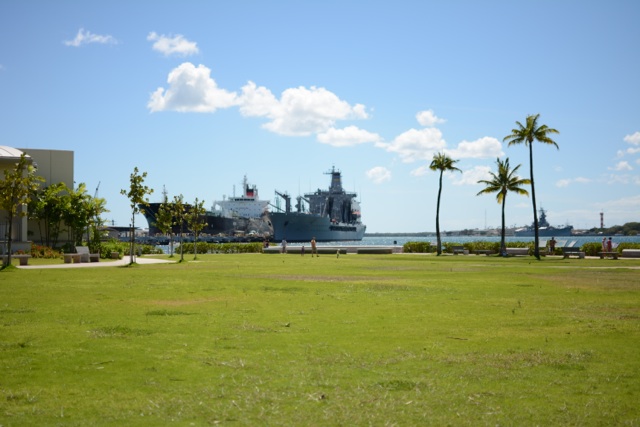 Torpedoes struck West Virginia, California, Oklahoma, Arizona, and Nevada battleships, as well as destroyed hangars and aircrafts. A second attack of Pearl Harbor came about 30 minutes later, while Japanese fighters and dive-bombers struck other bases and airfields around O’ahu. In about two hours, the Japanese significantly weakened the U.S. Pacific presence, killed over 2,500 people, and thrust the country into WWII. 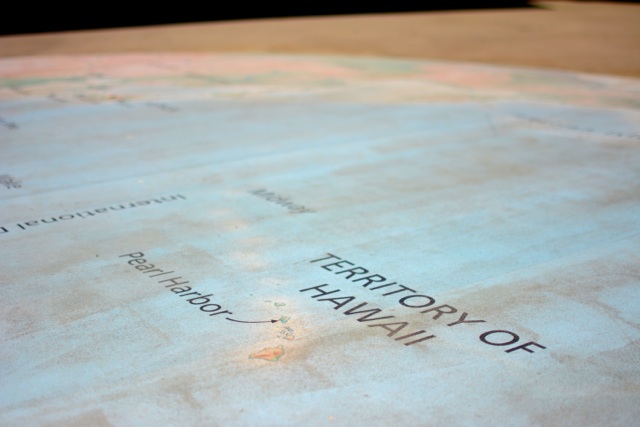 O’ahu attracts countless visitors per year and is known for its picturesque landscape, stunning turquoise waters, vibrant city of Honolulu, famous Waikiki Beach, and spirit of aloha. All of these attributes make the island special, but a trip to O’ahu would be incomplete without visiting Pearl Harbor. 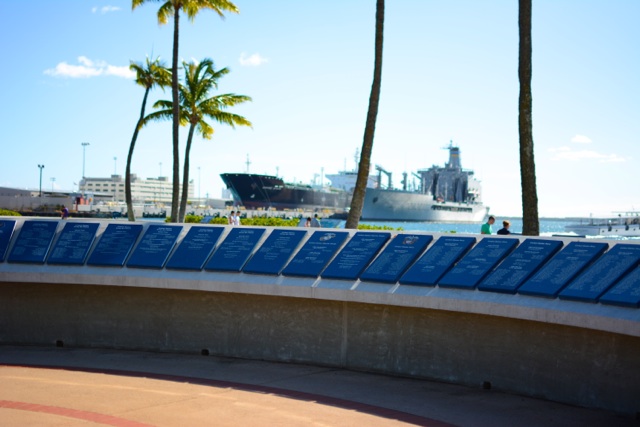 Located 45 minutes west of Waikiki, off Highway 99, Pearl Harbor is next to the U.S. Naval Base. It’s open daily from 7:00 am until 5:00 pm, with the last program starting at 3:00 pm. Tickets for the USS Arizona Memorial interpretive program can be found at the visitor center’s Aloha Court on a first-come, first-served basis. This program includes a 23-minute film in the Pearl Harbor Memorial Theater and then a U.S. Naval boat shuttles visitors to the USS Arizona Memorial. The program takes approximately 75 minutes. Half and full day tours, as well as tickets to the USS Bowfin, battleship Missouri, and the Pacific Aviation Museum can also be purchased. 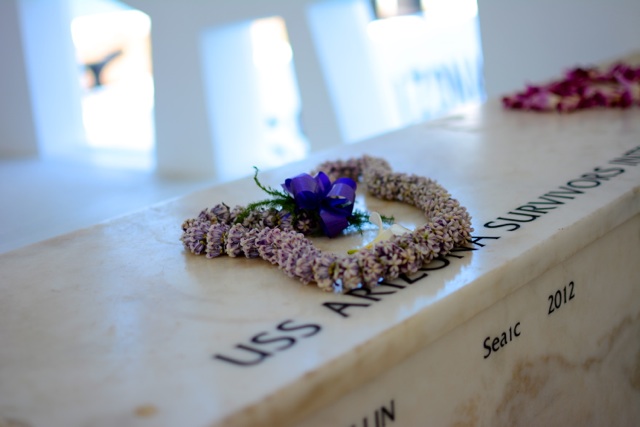 To fully comprehend the history and magnitude of the bombing of Pearl Harbor and its place in American history, I’d recommend renting the audio tour narrated by actress, Jamie Lee Curtis. It’s available for $7.50 in English, Mandarin, German, Korean, Spanish, French, and Japanese. A map guides visitors around the park, while corresponding numbers on plaques are keyed into the headset to trigger the narration. The tour can be completed in any order and at your leisure. 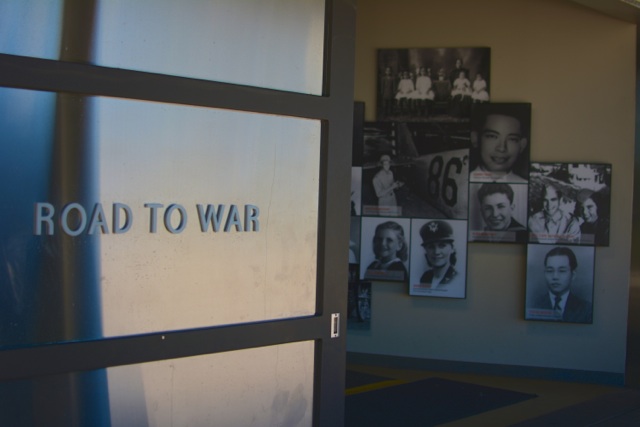 I found the most interesting aspect of my visit to be the Road to War and the Attack Museums. In the Road to War Museum, visitors learn about the events that led to the war with the U.S. and Japan through items such USS Arizona and the IMS Akagi models, a letter from President Franklin Delano Roosevelt, and video of a WWII Japanese code breaker describing the process. The Attack Museum is dedicated to December 7, 1941 and the attack on Pearl Harbor. There are remnants of the USS Arizona and one of the torpedoes that struck the ship, as well as a 1/3 scale Japanese B5N2 “Kate” torpedo bomber. Every fifteen minutes in the museum’s theater the movie, Battlefield-O’ahu, is played. Survivors also can be heard recounting memories from the attack. 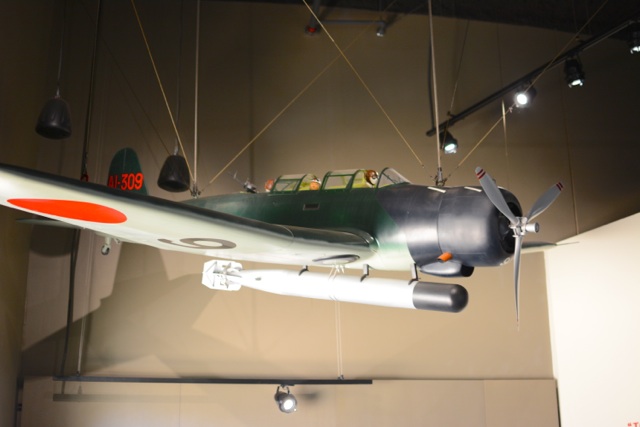 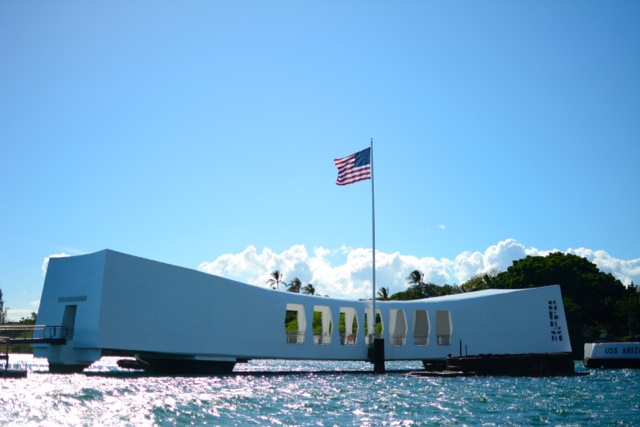 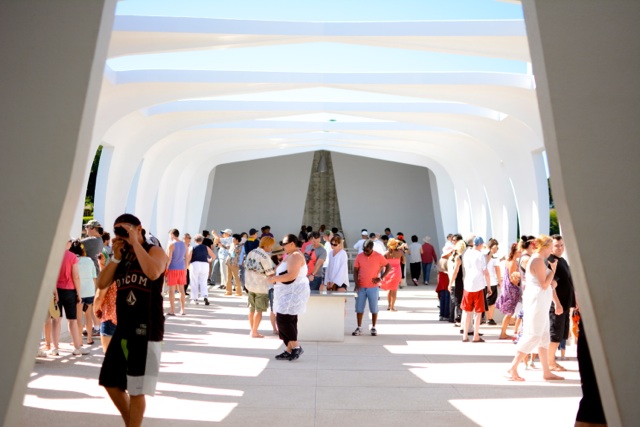 The park is not only a sad and chilling reminder of one of the darkest days in American history, but also a gravesite and a memorial to those lost in the attack on Pearl Harbor. I saw people from various nationalities posing for silly photos with huge grins on their faces while on the USS Arizona Memorial as if it was just another tourist attraction. This angered and saddened me at the same time. 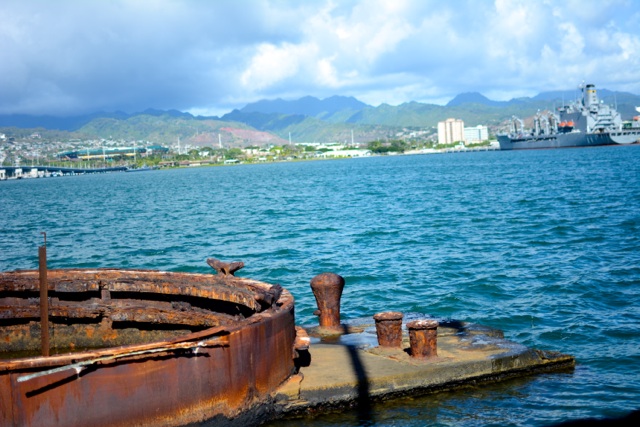 Pieces of the battleship and oil in the water can still be seen, which are real reminders of the people buried below. When visiting the park, it’s very important to remember that many people lost their lives in the Japanese attack and proper respect and decorum should be shown. Time spent visiting Pearl Harbor should be one of reflection, education, and remembrance. 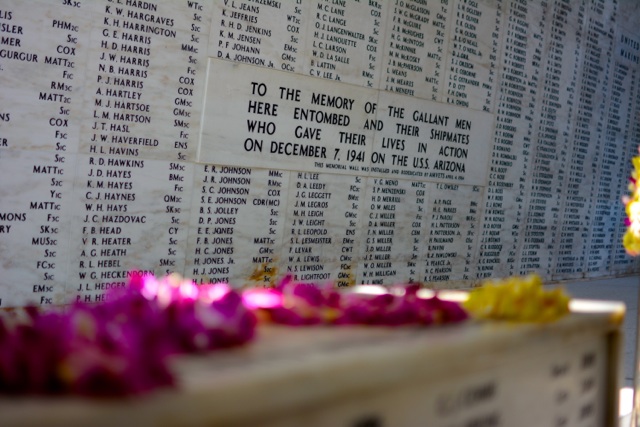 I was a guest of the O’ahu tourism board. In no way was I swayed to write a positive review by the friendly park rangers, the pristine park grounds, or the nationalistic pride I felt when visiting Pearl Harbor. As always, opinions are mine.