Without a doubt, New Orleans is one of the best cities for food in the world. Throughout the past couple of centuries, New Orleans has woven a distinct culinary fabric unique to Southeast Louisiana. Known for its Cajun and Creole fare, the Crescent City’s cuisine is a timeline of the area’s history. Cajun and Creole are often used interchangeably, but the cuisines are not one in the same. For starters, Creole cuisine uses tomatoes, while Cajun dishes don’t. No matter what you call the cuisine, there is no shortage of delicious dishes to eat in New Orleans.

What are Creole and Cajun Cuisines?

Creole cooking draws its influence mainly from French, Spanish, Portuguese, Italian, German, Caribbean, West African, and Southern US dishes. Much like French cuisine, Creole dishes are sauce heavy and slow cooked. Creole food usually features a multitude of ingredients, which was easily afforded by the wealthy New Orleans residents of the 1800s.

Cajun food is much more simple, using readily available ingredients, whether that’s alligator, turtle, or squirrel. Cajun cuisine traditionally consists of a main dish made with pork or shrimp, with steamed rice and seasonal vegetables on the side. Any good Cajun dish starts with the holy trinity of green bell pepper, onion, and celery. Named for the French-speaking Acadians deported from Canada by the British, classic Cajun dishes include boudin {not to be confused with the French kind}, jambalaya, gumbo, and boiled crawfish.

Having called Houston home for thirteen years, I benefited from the large number of Louisiana transplants, who brought their traditions and cuisine to the Bayou City. And given the proximity between Houston and New Orleans {5-hour drive or 1-hour fight}, I’ve been to the Big Easy on numerous occasions. Not having visited since Hurricane Katrina in 2005, I was excited to return to one of my favorite cities earlier this month. Of course, I wanted to see the transformation since the storm, but what I was most looking forward to was the food. Whether classics or newly discovered favorites, here are five delicious dishes to eat in New Orleans.

A trip to New Orleans is incomplete without tasting the state reptile of Louisiana: the alligator. Don’t knock it until you’ve tried it! I love fried alligator like a pig loves mud. What does alligator taste like, you ask? Well, chicken, of course. My first meal in New Orleans began with dinner at Huck Finn’s, a casual spot close to the Mississippi River. All set to get my fried alligator fix, the waitress suggested I get it blackened. As a big fan of blackened anything, I accepted her recommendation. I wasn’t disappointed. Gator tail meat is dipped in melted butter, dredged through a whole bunch of spices, then cooked in a scorching hot cast iron skillet. Served with a side of remoulade sauce, the blackened alligator is on point.

Native Louisianan and award-winning chef, John Besh, has got a little empire in New Orleans, with 16 acclaimed restaurants. One of my dinners was at Lüke, a lively place named after one of Besh’s four sons. A tip-of-the-hat to the former Franco-German brasseries that filled NOLA, I was intrigued. Having lived in Paris for more than two years, I always approach anything labeled “French” outside of France with extreme caution. What exactly is/was a Franco-German brasserie? I had visions of duck confit with a side of sauerkraut.

What I got was a seemingly never-ending parade of deliciousness, which included char-grilled oysters stuffed with gulf shrimp and blue crab, a sinful bread pudding with a side of vanilla bean ice cream and smothered in buttered pecan sauce, and probably the best dish I ate during my week in New Orleans—crispy Brussels sprouts. This magical blend of green apples, honey, toasted almonds, Creole cream cheese, and the all-important Brussels sprouts have me smitten. In fact, when I return to the Big Easy, I will go to Lükes, if only for these little cabbages.

There are several restaurants that are synonymous with New Orleans. Brennan’s, Antoine’s, Commander’s Palace, and Galatoire’s are but a few. A Crescent City institution since 1862, Cáfe du Monde deserves to be included in that list. The menu at Cáfe du Monde is simple: beignets. The Acadians brought these French-style doughnuts to New Orleans, and were sometimes filled with fruit. Now, the simple square dough is fried until golden, and then buried in powdered sugar. Add to your order a traditional chicory coffee. The Acadians introduced this root to Louisiana as a way to make the limited quantity of coffee last longer, as well as to take the edge off the dark roast. While at the French Market coffee stand, wash down an order of beignets with a cáfe au lait, which is made with half dark roasted chicory coffee and half hot milk. Bring cash and wear white.

Another one of those classic New Orleans eateries is Arnaud’s. Located just off of Bourbon Street, Arnaud’s has been feeding the city’s elite Creole cuisine since 1918. Exactly two families have owned Arnaud’s, with the fourth generation of the Casbarian family currently at the helm. With roots that deep, there’s no shortage of history, ambiance, and fine food. The elegant dining room is quintessentially New Orleans, but reminiscent of some of the Belle Époque brasseries of Paris.

With a French 75 {blend of Champagne and Cognac} from the James Beard Award-winning bar delivered to my table, I literally had a taste of home. Pouring over the menu, I decided on Oysters Arnaud to begin. Baked oysters aren’t anything a chef in France would consider, thus they were the obvious choice. A sampling of their signature oysters {Bienville, Kathryn, Suzette, Ohan, and Rockefeller}, I savored every single baked bite, while being entertained by the bananas Foster table-side shows.

Feed Me Menu at Louisiana Bistro

I’m not going to lie; being a food writer is pretty awesome. Normally when I’m invited to a restaurant the chef surprises me with a tasting menu. Often I have no idea what dishes will appear or how many courses to expect. It’s kind of spoiled me for dining out on my own. Choosing is difficult, and now I just blankly stare at menus wondering what it is that I actually like to eat. Thus, imagine my excitement when I sat down for dinner at the Louisiana Bistro and saw the Feed Me menu.

Not designed for the control freak or picky eater, the Feed Me menu is a three-to-five course meal created by the chef. He comes to your table and asks a few questions about allergies and preferences. All you have to do is sit back and be pleasantly surprised. For $50-70 per person {plus the cost of booze}, you get a customized meal made with the freshest seasonal ingredients. I’d say that’s a bargain at twice the price.

Whether Creole, Cajun, or a hybrid of the two, there is not a better city in America to throw your diet out the window. Forget the yard-long plastic cups filled with frozen hurricanes and hand grenades. Spend your month’s calories on the delectable food: red beans and rice, crawfish étouffée, Andouille sausage, shrimp po’ boys, muffuletas, raw and grilled oysters, bananas Foster, pecan pralines, and bread pudding. Despite having gained another five pounds just typing that sentence, I have no regrets for my week long food-fueled time in the Big Easy. Bon appétit and laissez les bons temps rouler! 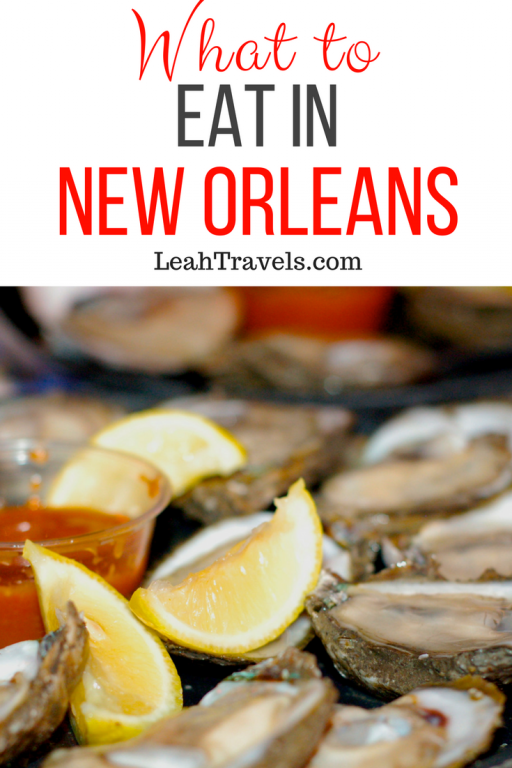 Inside the House of Waterford Crystal (Part 3)