On June 28, 1914, Archduke Franz Ferdinand, the heir to the Austro-Hungarian Empire, was assassinated in Sarajevo. This event, along with Germany’s concern over the French and British Colonial expansion and the desire for more of Europe’s coastline, led to the start of the Great War. When the conflict ended on November 11, 1918, about 100 countries were involved, truly making it a World War.

It wasn’t until April 6, 1917 that President Woodrow Wilson entered the United States into the war, a decision that made him weep. It was the sinking of American supply ships bound for Europe by German U-boats, as well as an intercepted message from Germany asking Mexico to start a conflict with the United States in exchange for Texas, New Mexico, and Arizona after the war, that led to American involvement. Although the United States was only a part of the war for less than two years, two million soldiers were deployed primarily to eastern France.

Places to See World War I History in France

With the centenary of the ending of World War I being recognized on November 11, 2018, I’ve been honored to take two Great War-themed trips to eastern France. Not only did I discover a history that isn’t widely known or studied in the United States, but I also was able to learn more about the Franco-German history. Whether you’re a historian, curious, or interested in honoring those that fought for freedom, here are some of the most poignant places to places to see World War I history in France.

Walking through the towering trees and lush greenery of the Forest of Compiegne puts many travelers at peace. It seems symbolic that this is the location where Marshal Foch, Sir Rosslyn Wemyss, and General Weygand met with German forces to end World War I, on Nov. 11, 1918. Among the trees and symbolic monuments is an unassuming white building, which houses the Armistice Memorial Museum. Inside, visitors will find a replica of the railway carriage where Marshal Foch, his officers, and Germans signed the Armistice to end the war, as well as authentic World War I artifacts, like newspaper articles and photographs.

Stay in the Oise Department

Tiara Château Hôtel Mont Royal is a beautiful five-star château located in the heart of the Chantilly Forest. It was originally built by Fernand Halphen. Elegant, tranquil, and picturesque, it’s hard to believe this place is only 35-minutes from Paris and ten minutes from Charles de Gaulle Airport.

Auberge A La Bonne Idée is located between Compiègne and Pierrefonds in the cutest village of Saint-Jean-aux-Bois. You won’t believe that this hotel only has three stars; its 18 rooms and five suites are home-like perfection. It also has a Michelin-starred restaurant for your dining pleasure.

At the foot of Belleau Wood sits the nearly 43-acre Aisne-Marne American Cemetery. The headstones, situated in curves facing the memorial chapel, honor the 2,289 soldiers who died — mostly in in this area and the Marne Valley — during the summer of 1918. The overlooking chapel, with stained glass windows, sculptures, and inscribed with the 1,060 names of those who went missing, serves as a beautiful yet somber reminder of the severity of the Battle of Belleau Wood.

Also known as Le Monument Américain à Cote 204, the Chateau-Thierry American Monument sits at 204 meters above sea level, overlooking the majestic Marne Valley. This location is where American forces took control of the hill after the July 1918 attacks. The monument, including sculptures representing France and the United States and a map showing the movement of the troops during the Aisne-Marne battle, serves as a commemoration of the victories and sacrifices of the French and Americans offensives.

Stay in the Aisne Department

Château de Fère is part of Small Luxury Hotels with 29 rooms and suites. Set in a forest, serenity, nature, and luxury is all around. And you certainly can’t miss crossing the rock suspension bridge to see ruins of Château de Fère-en-Tardenois, which is located only steps from the hotel.

The Musee Romagne 14-18 is a museum less focused on the French battles of World War I and more dedicated to the day-to-day lives of soldiers and those remaining in the civilian communities. This museum shows visitors how soldiers passed time on a daily basis in their encampments away from battle and how women and children at the homefront kept communities functioning. The Musee Romagne 14-18 dedicates 260 square meters to the lives of the ordinary French soldier, as well as those at home, during WWI.

A staggering 14,246 bodies of military dead are buried at the 130.5-acre Meuse-Argonne American Cemetery. Most of the soldiers buried here sacrificed their lives during the Meuse-Argonne Offensive of WWI. The dizzying rows of headstones lead to a chapel atop the ridge — its windows covered in stained glass and adorned with the American unit insignia.

Flags of the allied nations sit behind the altar, and the chapel contains memorial loggias on both sides. On one panel of the western loggia is a map of the Meuse-Argonne Offensive. The others are inscribed with the names of the 954 missing. The renovated visitor center reopened in late 2016, and now offers interpretive exhibits, films, interactive displays, and photographs to introduce visitors the importance of this offensive during WWI.

Just seven miles south of the Meuse-Argonne American Cemetery is the WWI Montfaucon American Monument. This towering monument is made of one granite doric column topped with a statue symbolizing liberty. The monument stands 61 meters above the ruins of a former village where the American First Army forced the enemy to retreat during the Meuse-Argonne Offensive from Sept. 26, 1918, to Nov. 11, 1918. Visitors can view the engraved map of operations on the walls of the foyer before climbing the 234 steps to the top of the memorial to take in the awe-inspiring views of the battlefield.

The Memorial de Verdun sits on the massive battlefield and destroyed village where the 300-day-long Battle of Verdun took place in 1916. The memorial serves as a place to commemorate the nearly 700,000 casualties, including French and German soldiers and innocent civilians, of the roughly one-year-long Battle of Verdun. The military museum on site displays a number of French and German rifles, artillery, uniforms, vehicles, and other equipment used during the battle.

This is where the military remains of the French and German soldiers lost during the Battle of Verdun are found. Ossuary de Douaumont shows the scale of casualties and violence associated with the Battle of Verdun in a hair-raising way — with piles of skeletal remains separated by regions of the 20-square-kilometre space where this tragic battle took place. Many of the piles are accompanied by bricks displaying the soldiers’ names, but tens of thousands of the soldiers remain unnamed. The hill sloping downward in front of the monument is filled with 16,142 graves, making it the largest single French military cemetery of WWI.

Stay in the Meuse Department

Located in the town of Verdun look to Les Jardins du Mess. The four-star hotel overlooks the Meuse River and Cathedral of Notre Dame de Verdun. Although the 40-room hotel is housed in a 19th century building, the interior is modern in design.

Historian Jean-Pierre Verney collected documents and artifacts from World War I for more than 50 years. It wasn’t until 2005, when the French town of Meaux bought his unprecedented collection, that a museum was constructed to showcase Verney’s more than 50,000 items. Le Musee de la Grande Guerre, or the Great War Museum, is where you can see Verney’s diverse collection of WWI items, from military plans to full uniforms, heavy machinery, and weaponry. The Great War Museum has added to the collection, now totaling more than 65,000 items, to make this the largest collection of artifacts from 1914-1918 in Europe.

A hundred years have passed since the Great War ended, though time should never erase the memory of those who fought and died. The atrocities faced were not conceivable at the time. This war was the first time chemical weapons were used, as well as submarines and tanks. It seems as if nothing was learned from the millions lost, as the Great War served as the pre-cursor for World War II. Visiting the sites where both wars took place is a somber reminder that we should not only remember, but also study history, lest it repeat itself. 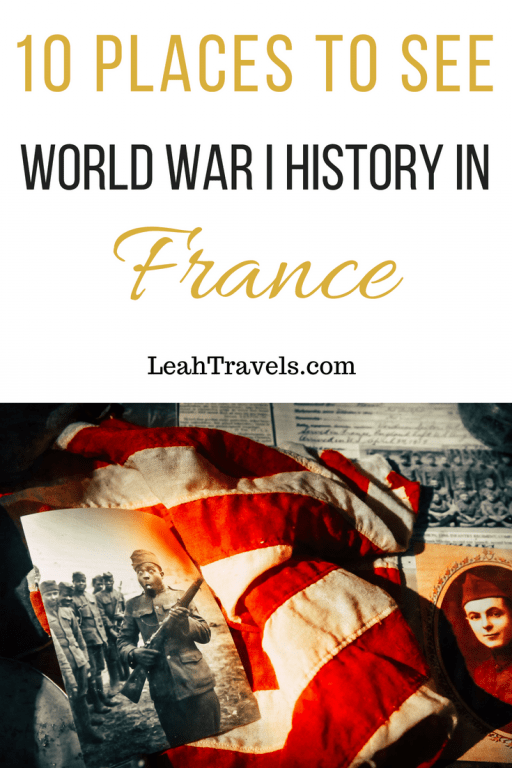