After a Saturday night of bloco parties and general Carnival craziness, I was happy to have a leisurely Sunday morning in Rio. A late breakfast at Gringo Cafe and some shopping was just what I needed. Besides, I had a huge Sunday night planned at the Sambadrome. My friend and hostess, Xochitl, suggested we visit the Hippie Fair.

On Sundays at the Praça General Osório in Ipanema, there are about 700 vendors selling all kinds of arts and crafts. Thousands of locals and visitors visit the market each week. 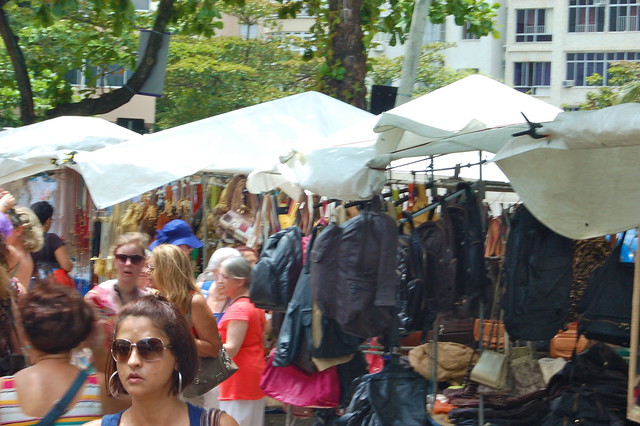 The Hippie Fair began in 1968 by a bunch of, you guessed it, hippies. It’s grown and evolved into a place to see some of Brazil’s most talented artisans. 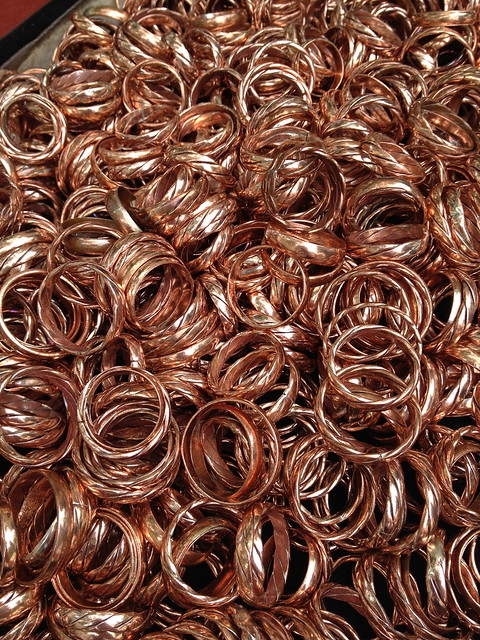 A large selection of inexpensive, hand-crafted jewelery is showcased throughout the market. Beautiful Brazilian-made earrings, necklaces, rings, and bracelets are proudly displayed by their makers. 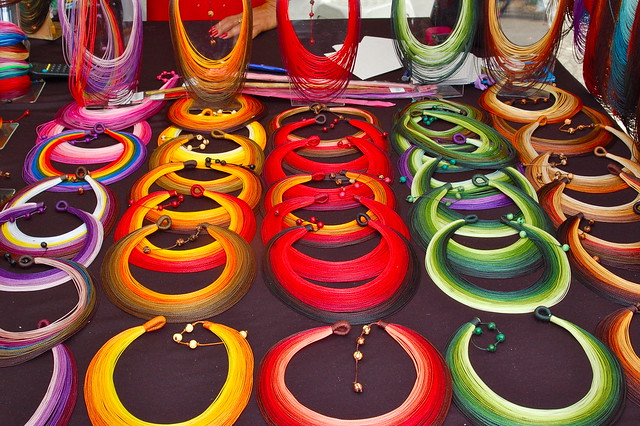 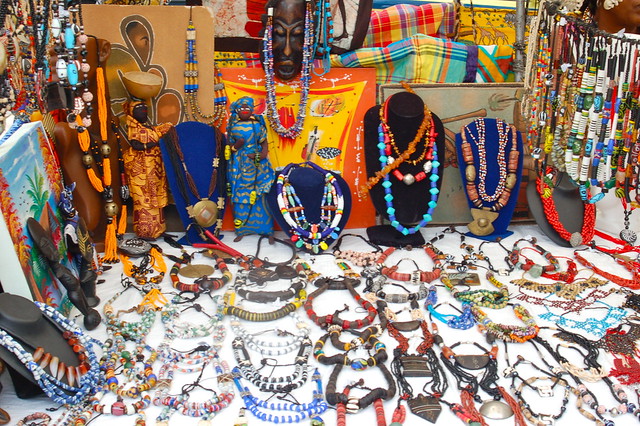 Brightly-colored beads, string, and gems are used to create and decorate the pieces. Hand-woven leather goods are adorned with shells and semi-precious stones. 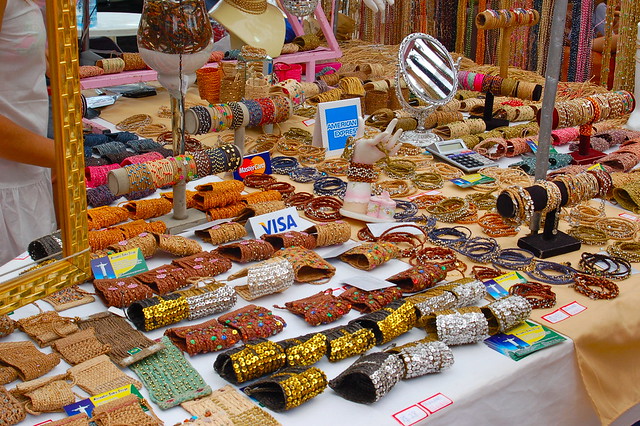 From simple jewelry pieces to more detailed works of art, you’re sure to find something at the Hippie Fair for yourself or to take home as souvenirs for family and friends. 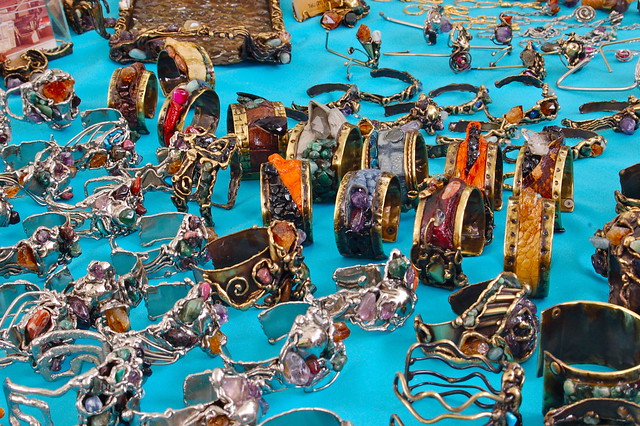 Semi-precious gem stones  can also be found at the Hippie Fair. You’ll find loose stones of medium quality. Common Brazilian stones such as, amethyst, blue topaz, quartz, and citrine are available. Keep in mind that if you are in the market for something extra special, you might want to visit H. Stern. 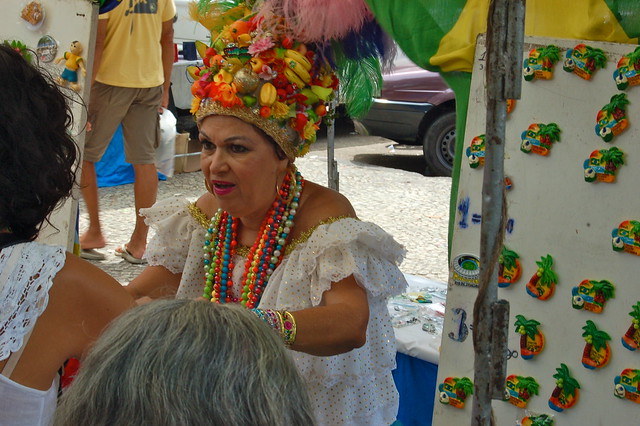 If you’re not particularly interested in jewelry (gasp!) there are other objects of desire, as well as the occasional Brazilian dressed as Carmen Miranda. 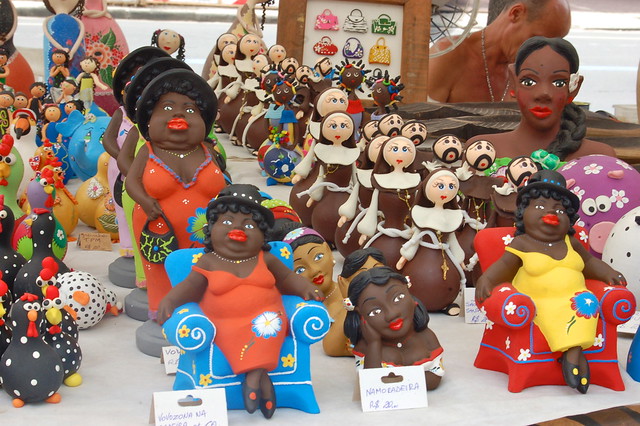 From colorful figurines to pewter to acrylic-covered trivets that mimic the famous Rio sidewalks, you’ll find a variety of items made by Brazilians. 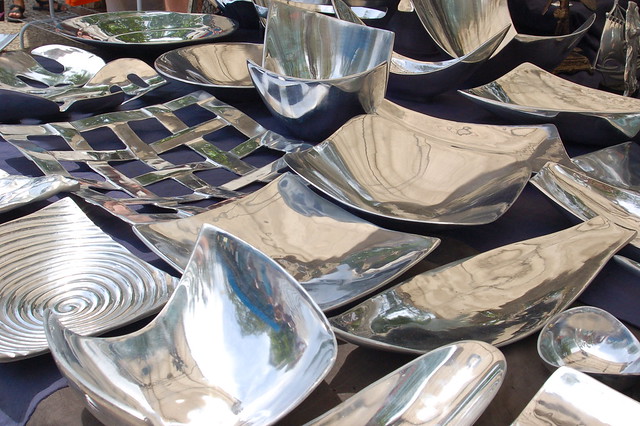 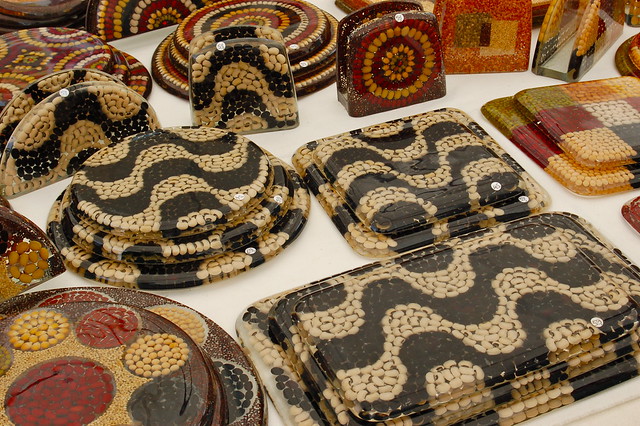 Traditional Brazilian instruments used to create samba music are also available.  For pretty decent prices you’ll find instruments such as the caxixi, tambourines, and various kinds of drums. Throughout the day, melodious musical sounds are heard by musicians selling their wares. 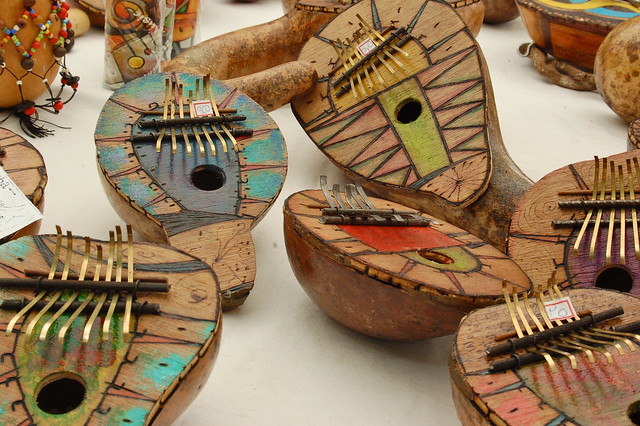 Clothes and shoes are also a common sight at the Hippie Fair. Leather in Brazil? You betcha, especially when it comes in the form of short-shorts. A quintessentially Brazilian item, the Havaiana flip flops, are adorned by hand with beads and flowers. You can pick up your Rio souvenir t-shirt here, too. 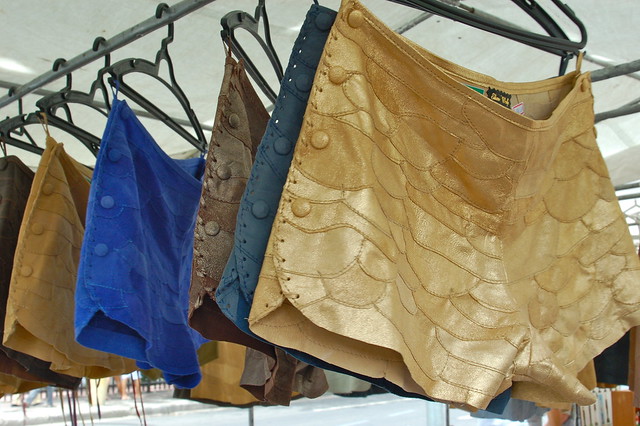 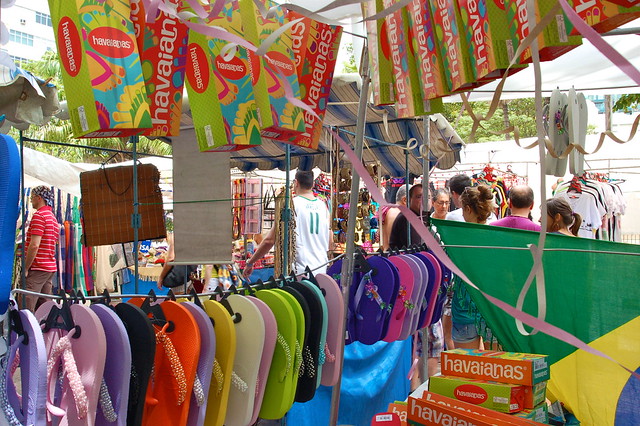 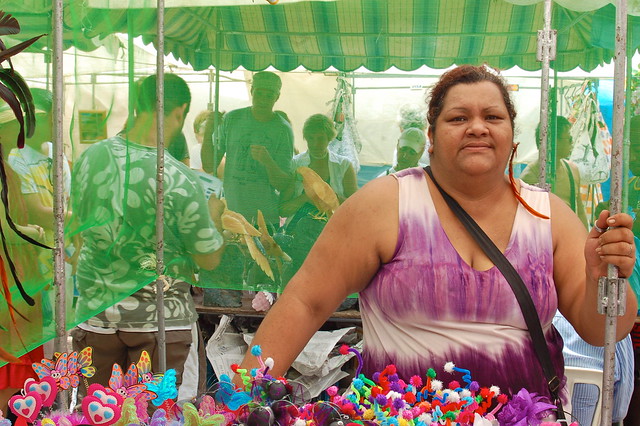 The Hippie Fair is probably most famous for its number of talented artists in attendance. Don’t come here looking for monochromatic canvases. No, these paintings are as bright, colorful, and cheerful as the Brazilian people that create them. 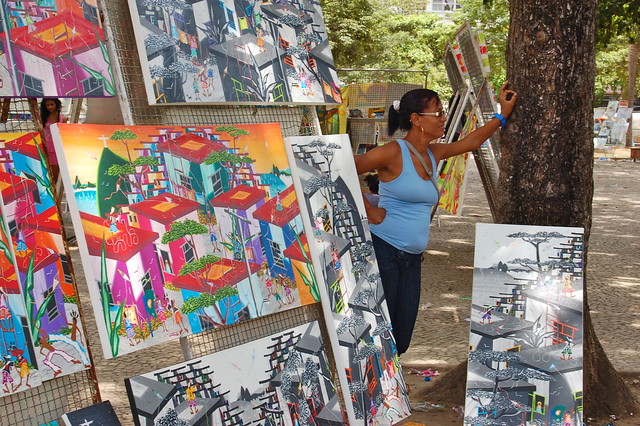 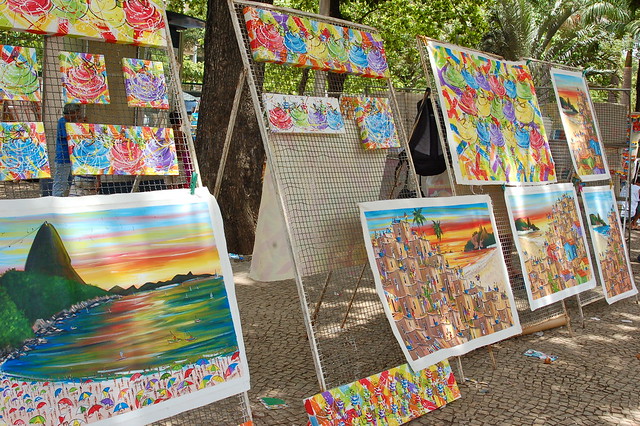 Canvases are splashed with visions of beaches, Carnival scenes, favellas, and beautiful, curvaceous women. You can buy a canvas, a stretched canvas, or have one framed on the spot. I bought a small painting of the favellas that easily fit into my luggage. 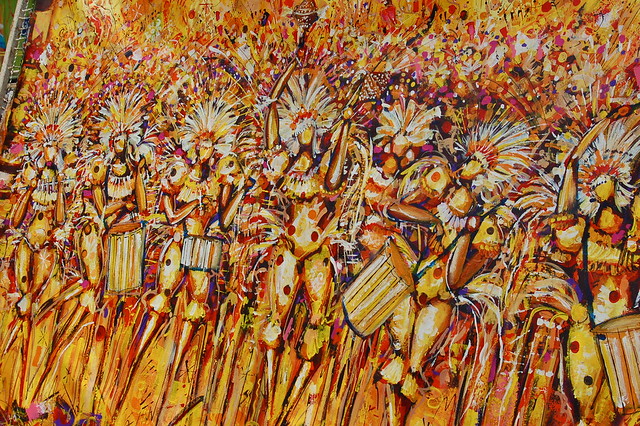 While most of the paintings are already created, there are some artists painting on the spot. We watched the man in the photo below for a good ten minutes. It was fascinating to  watch him work and see the picture come to life. I also found it humorous that he was drinking beer the entire time and completely hammered. 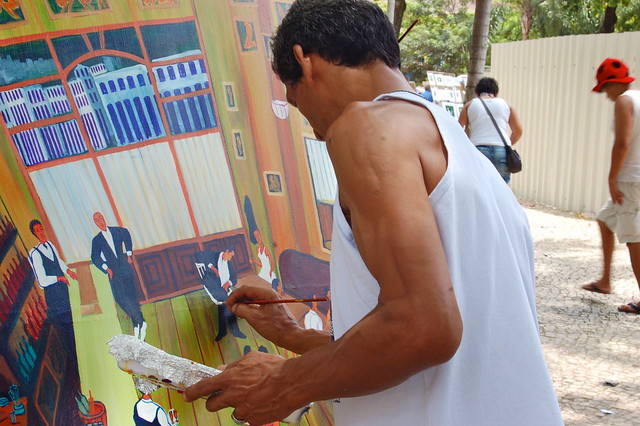 Snack food items are also sold, including authentic Bahian cuisine found in one of the park’s corner. Women from the state of Bahia come each week dressed in traditional Brazilian/African attire selling their typical Bahian cuisine. Since we’d just come from breakfast, I didn’t try the food, but it looked and smelled delicious. 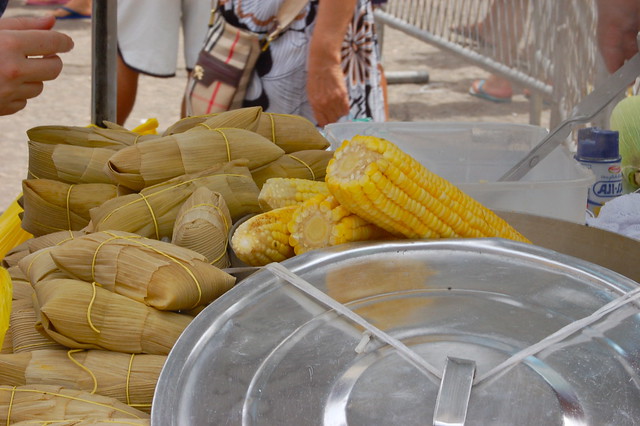 I could have stayed much longer than the hour I spent at the Hippie Fair. There was so much to see as well as an opportunity to interact with locals. In total, I left with four leather bracelets, a favella painting, and two sets of giant map colors made from tree branches. I’m not sure exactly how much I spent, but it was less than $40 USD. That’s not a bad price to pay for some souvenirs and a peek at a Rio tradition.

Reasons to Visit the Lorraine Region in France