I’ve written “Your Guide to the Rio World Cup” for Forbes, so if you’re looking for a basic guide to visiting Rio de Janeiro then check that out. This, however, is not that kind of guide.

My month anniversary for living in Rio has come and gone. While I’m not yet an expert on the city, I have managed to gather quite a bit of practical knowledge in those days. And as the media and soccer fans pour into the city for the month-long World Cup, I find myself wanting to help them navigate my new home. 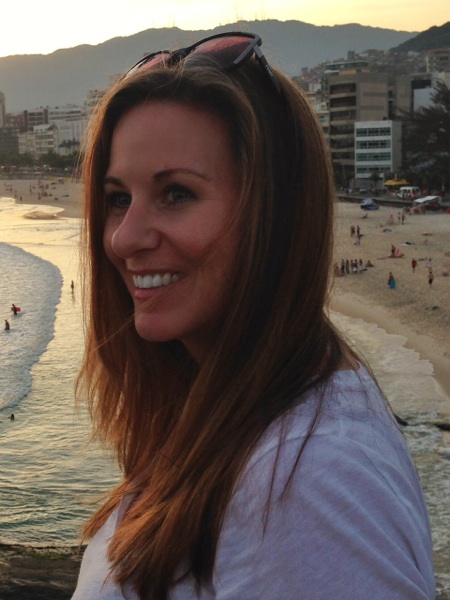 Since moving into my comfortable Ipanema abode, I’ve managed to settle into a groove. During that time, I’ve made mental notes of things I’ve found unusual, different, interesting, or just plain strange—things that those visiting Rio de Janeiro might just need to know. And with the attention of the world on Rio over the next month, I figured I might as well share them here. 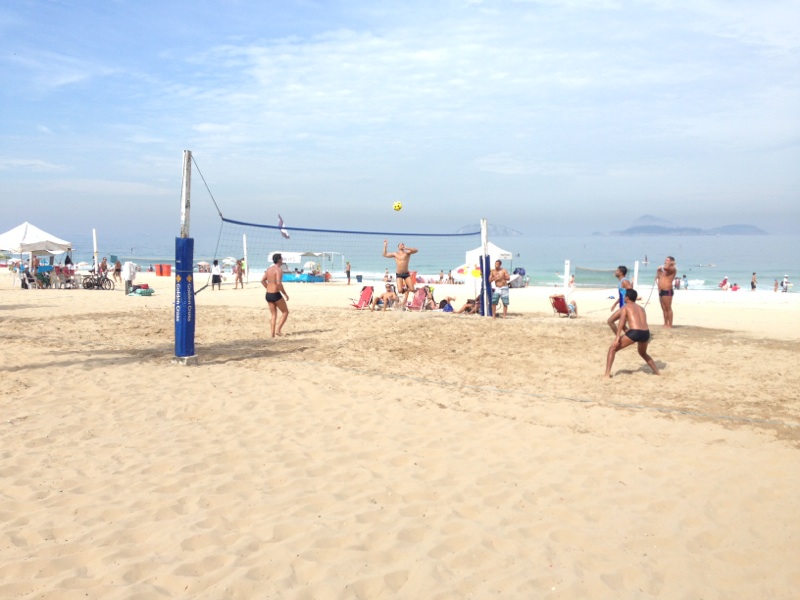 In case you’re unaware what a sunga is, it’s not quite a Speedo and nowhere near a board short. It is standard beach attire for men in Rio, no matter age or physique. A sunga on an exceptional physique will entrance you, while a sunga on anything short of spectacular is cause to divert your eyes. The same goes for the tiny strips of fabric Brazilians like to call a bikini. While I won’t be adapting the standard beach attire for Rio, I can’t help but admire the positive body image it takes to don a sunga or bikini without having a body like Camila Alves or Neymar Jr.

Pedestrians Don’t Have the Right of Way 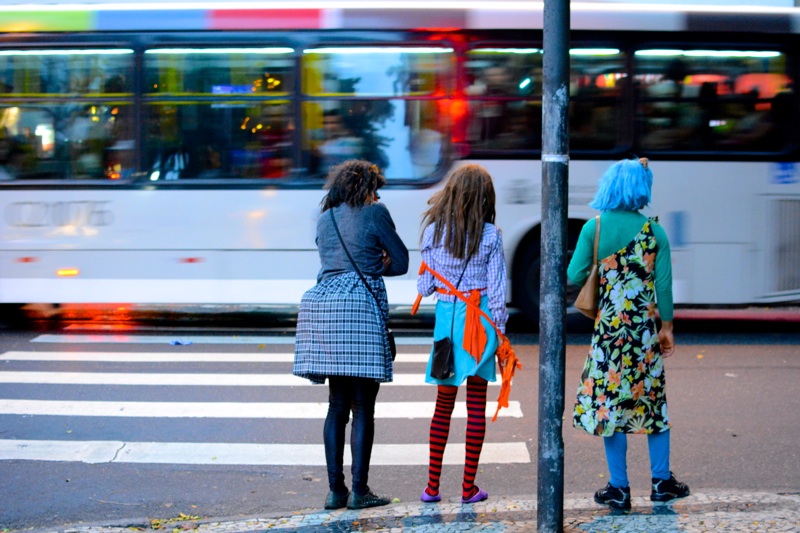 Don’t even entertain the notion that drivers in Rio will stop just because you’re in the road. The only time that pedestrians have the right of way is if the walk light is on. Step out in the street against the light and you’ll likely become someone’s new hood ornament.

Caipirinhas Will Mess You Up 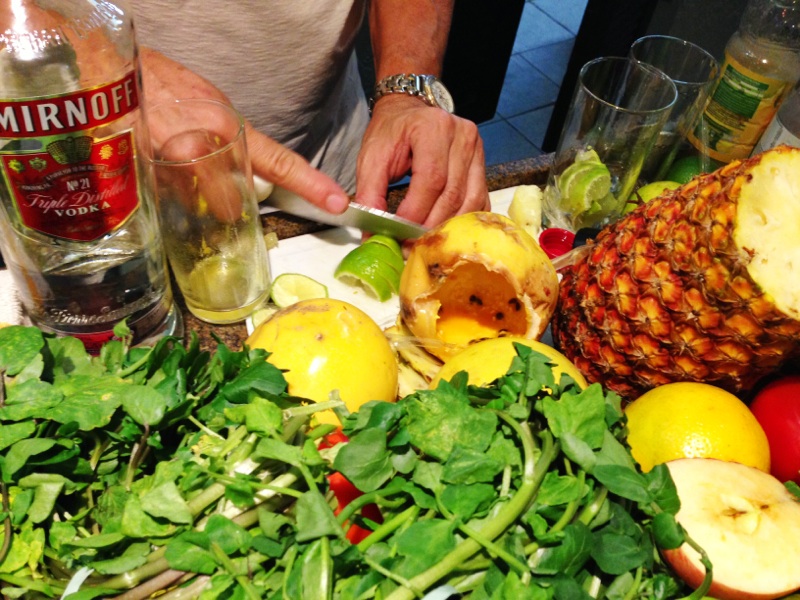 A Caipirinha is the national drink of Brazil. Traditionally made with lime, sugar, and cachaça, this drink is worth a try even for a dedicated beer drinker. Cachaça is a spirit derived from sugar cane, although it’s anything but sweet. Beware. The tartness and strength will punch you in the face on the first sip. Drink one and all’s right in the world. The second one tastes even better, although somehow it doesn’t taste as strong as the first. This, my friend, is a dangerous path, one that those visiting Rio de Janeiro flirt with too often. Keep throwing back caipirinhas all night and you’ll likely spend the night in a pool of your own vomit. On a more positive note, you’ll also find caipirinhas made with various other fruits, as well as vodka and sake.

Get Cash on a Weekday

Walk by an ATM or bank on Friday and you’ll see massive lines of people waiting to get cash. It’s payday for Cariocas, and they’re getting ready for the weekend. That alone isn’t an unusual occurrence. What is different, at least in the United States, is that the ATMs will often be out of money on Saturday and Sunday, and there ain’t nobody refilling that sucker until Monday. Just do yourself a favor and get your money Monday through Thursday. 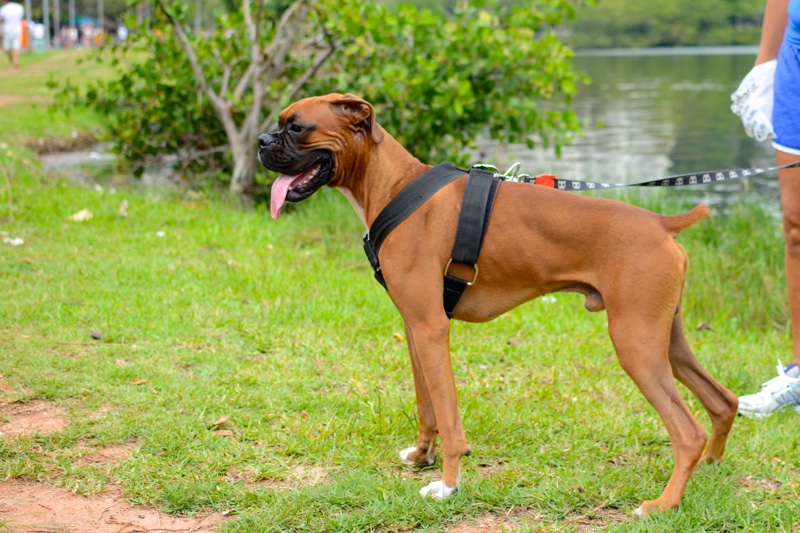 I’ve already noted what a pet-friendly city Rio is in my post, “The Dogs of Rio de Janeiro, Brazil.” What I didn’t mention in that feel-good piece is that that male dogs of Rio are packing. Let’s just say that Bob Barker’s message of “…help control the pet population. Have your pets spayed or neutered” didn’t quite make it to South America. 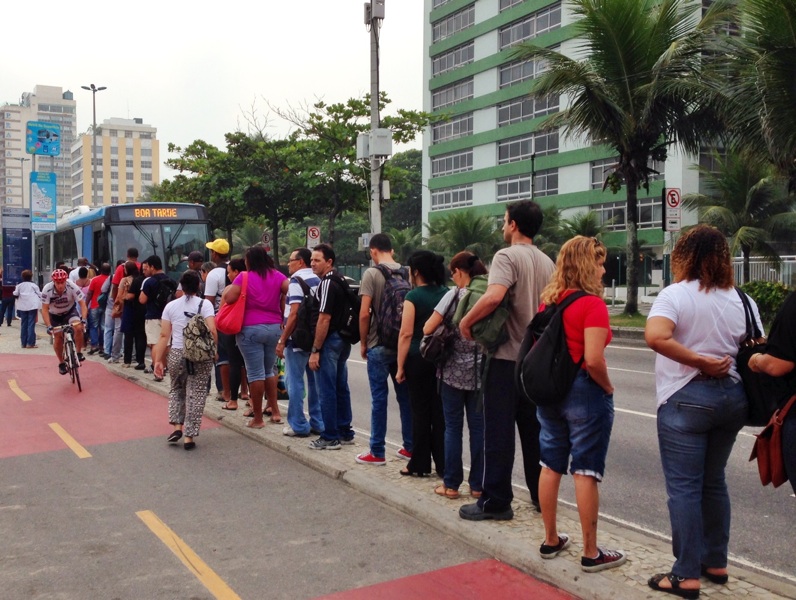 On a clear day there’s organized chaos, but on a rainy day…

It doesn’t rain a whole lot in Rio, but when it does, the city forgets how to function. It’s like the little moist droplets from the sky are acid frying everyone’s brains. Traffic is unlike any city I’ve ever experienced, including Beijing. Find a cab? Forgetaboutit. You might as well grab an umbrella, because you’ll be able to walk to where you want to go faster than you can find a cab and take it through traffic.

The People in Orange 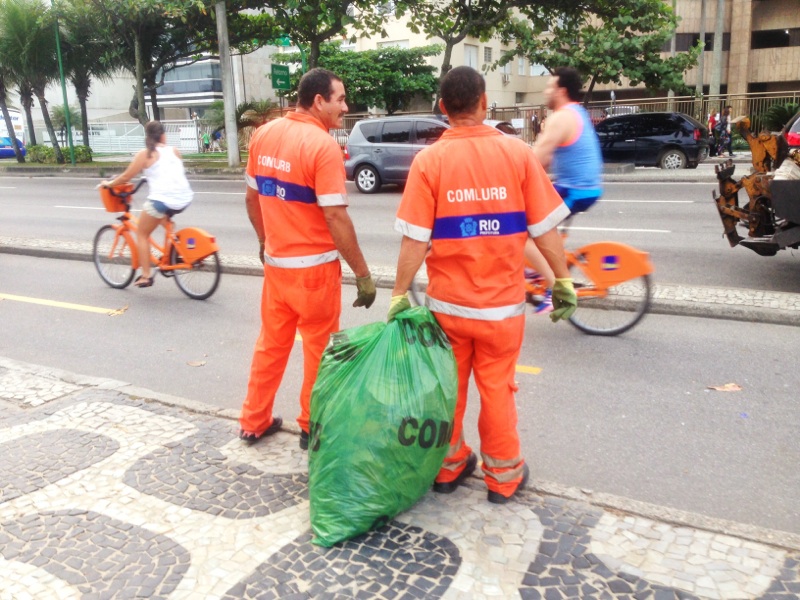 When I first arrived, I couldn’t help but notice the men and women dressed in head-to-toe orange outfits around the city. My initial thought was that these were prisoners on work detail. After all, it’s very similar to what they wear in the USA. I thought, how trusting and progressive Rio is to allow their prisoners on the street without supervision. Yeah, obviously that’s not the case. These are city maintenance workers.

Don’t be an Arrogant English Speaker 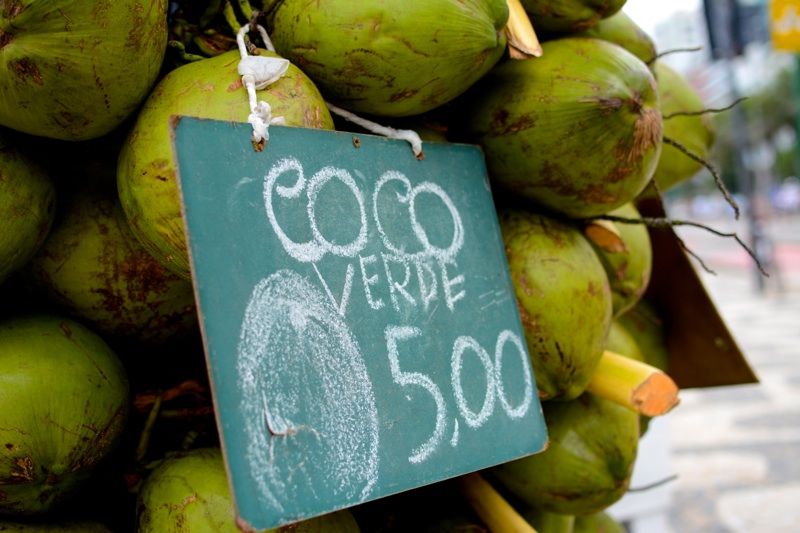 Do yourself a favor and learn some Portuguese prior to visiting. Once you get out of the JW Marriott and Sofitel, the average Carioca doesn’t speak English. Even jumping in a cab and saying Fogo de Chão often doesn’t cut it. I used to think I’d take to Portuguese given my Spanish background, but that was a misguided pipe dream. Some of the words are the same, but the pronunciation is different. Plus, the Cariocas add a lot of “shhh” sounds on the back end of their words that are not used in other parts of Brazil. In short: Portuguese is freakin’ difficult.

However, despite knowing very little Portuguese, I’ve managed to communicate at a rudimentary level in Rio using lots of hand gestures, as well as iTranslate and Word Lens apps on my iPhone. However, here are some essential phrases you should know before coming to Rio:

Keep Your Purse and iPhone Close 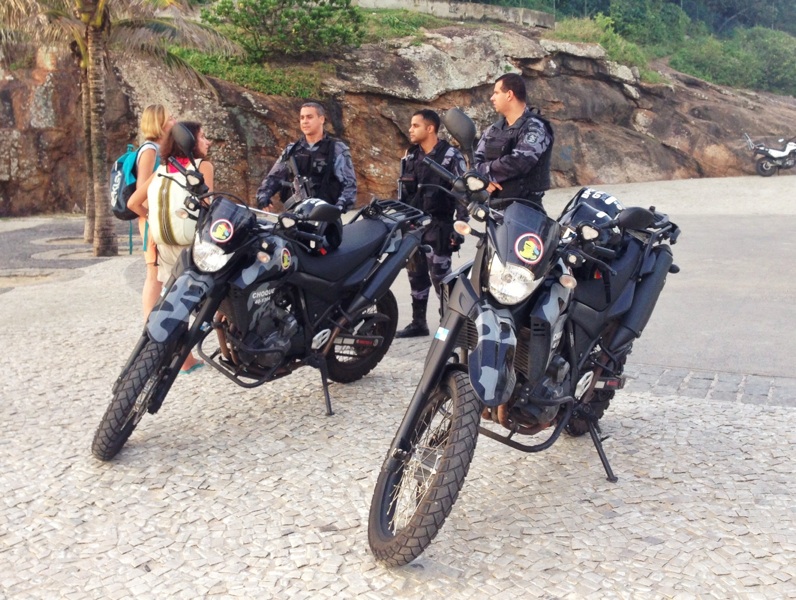 Alright, you didn’t think I’d have a practical guide to visiting Rio de Janeiro without some sort of mention of crime, did you? Rio has a reputation for being a dangerous, crime-ridden city. Yeah, so they’ve come by some of that honestly, but I think the hype surrounding it is exaggerated, at least in the tourist zones. There are places in Houston, London, New York, and Paris that I wouldn’t go because perceived danger, and the same goes for Rio.

I could mention instances of robberies at gun and knife point, kidnappings, and rape, but the odds are that’s not going to happen when you visit Rio. In the past week, I’ve seen a massive increase in police and military around Lagoa, Copacabana, and Ipanema. Three-by-three, officers are patrolling where tourists {and thus the criminal element} frequent. This, by no means, should give visitors a false sense of security. 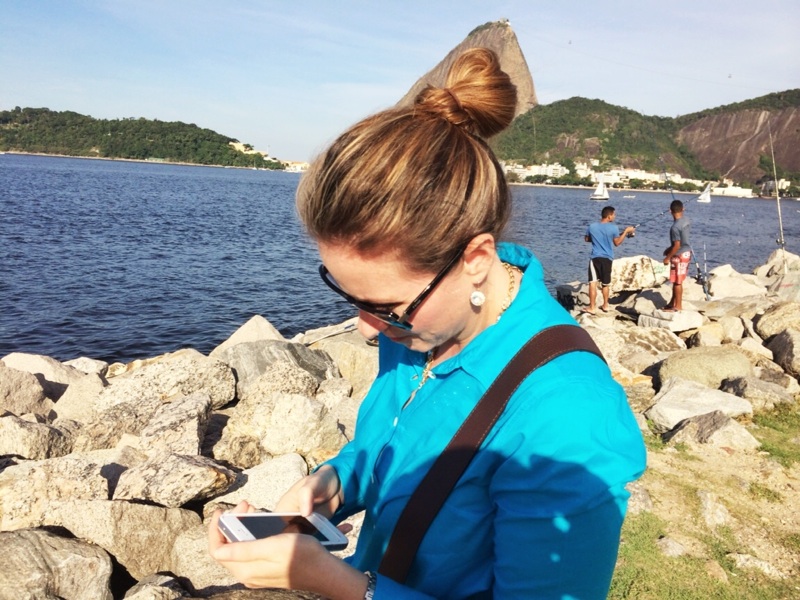 Pickpocketing and petty crime happen in every major city, and Rio is no different. The key is to not be a complete dumbass. Be aware of your surroundings. If you carry a bag, keep it zipped, buttoned, and close to your body. Don’t strut around with your Louis Vuitton or flashy jewelry. Don’t put your wallet in your back pocket. DO NOT walk around with your phone or camera casually in your hand. It will be ripped from your grasp faster than you can text, “WTF?” 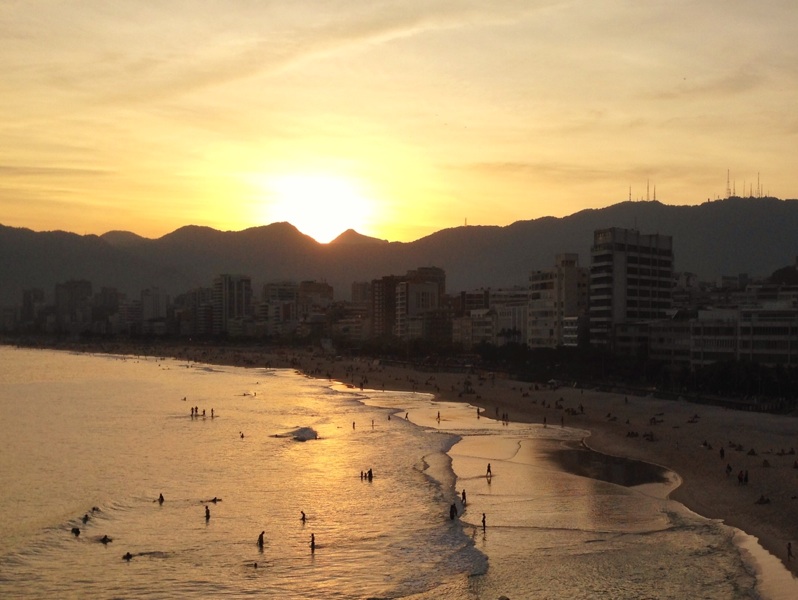 So, whether you’re coming to Rio for the World Cup, Carnival, 2016 Olympics, or just for pleasure, take note. And if you’ve spent time in Cidade Maravilhosa, what do you think first-time visitors should know? Sound off in the comments.