Just in case you didn’t know, Lee Abbamonte is the youngest American to visit every country in the world, and now he’s also attempting to become the youngest person to visit all 321 countries and unique destinations in the world per the Travelers Century Club list. Lee’s a travel writer and expert {duh} that has appeared on the Travel Channel, NBC, CNN, ESPN, Fox News and has been featured in the New York Times, Washington Post, Huffington Post, Bloomberg, Discovery Channel, and many others.

Come on, Lee, nobody likes a slacker.

Lee’s visited 306 countries and is one of the world’s most-traveled people, so with that kind of travel pedigree, what in the world had him recently road tripping around Texas? I find out about this well-traveled New Yorker’s unplanned holiday in the Lone Star state. 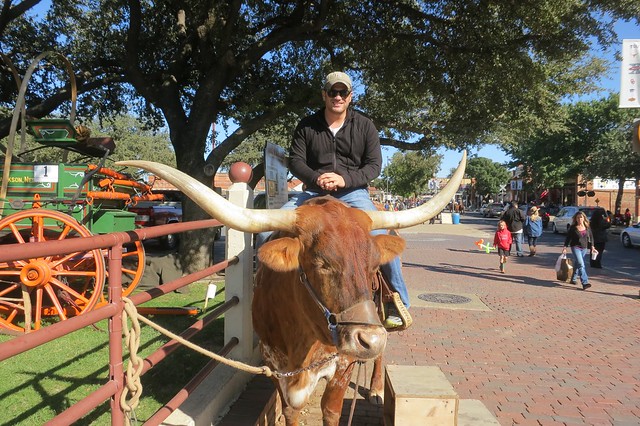 Leah: You’ve actually spent quite a bit of time in Texas prior to this recent trip.  When was the last time you were in the Lone Star state? What were you most looking forward to in returning to Texas?

Lee: The last time I was in Texas was 2007 in Houston for a wedding. However, I used to work half time in Houston and have traveled much of eastern, central, and northern Texas.  I was most looking forward to the food, of course!

Leah: I saw the video of mutton bustin’ that you posted on Facebook from the rodeo at the Fort Worth Stockyards. I’ve seen that event my whole life and it never occurred to me that anyone would find it strange. Give me your thoughts on mutton bustin’. And out of all the odd things you’ve seen in your travels, where does it rank?

Lee:  Mutton Bustin is ridiculous in my eyes. It’s essentially child abuse. What kind of parent would put or allow their child to be placed on a runaway sheep!? It blew my mind. I’ve seen a lot of odd things around the world, but for the US, it’s right up there for weirdness!

Leah: You’re a huge sports fan, and part of your trip with the Fort Worth Visitors and Convention Bureau centered on a Mavericks pre-season game and a Dallas Cowboys game against your beloved New York Giants. Besides your team coming out victorious, what did you think of Jerryworld, the new Cowboys’ stadium? How does the atmosphere compare with other sporting events and/or venues you’ve attended?

Lee:  I honestly thought the new stadium could be the 8th wonder of the world, and I am not sure if I mean that in a good way or not. The stadium is clearly incredible, but it is so big it is almost overwhelming. I would like to go back and tour when there are not 100,000 people in the stadium. The atmosphere was whatever to be honest. I expected more from the Cowboys fans. I also think the size of the stadium makes it difficult for it to really rock. That is a problem with many new stadiums including the new Giants Stadium. 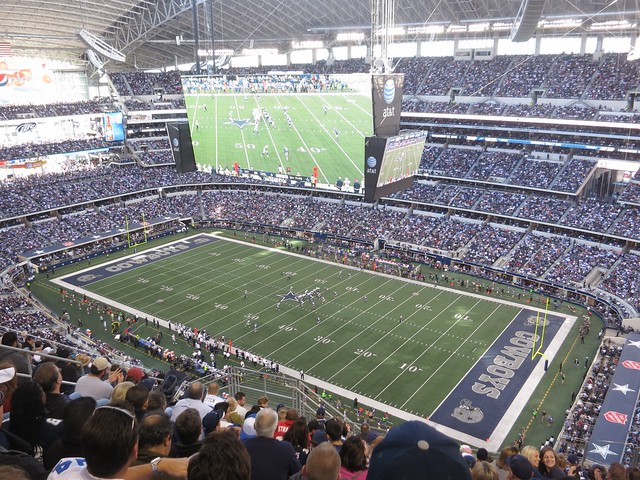 Leah: After a couple of months of traveling non-stop, you were set to leave Texas back to New York City. Hurricane Sandy had other plans and your flight was canceled not once, not twice, but three times. Instead of sitting around the Metroplex you took a road trip. What was your itinerary and what was your rationale for choosing it?

Lee:  My itinerary was insane, to be honest, and was never planned. It just kind of evolved from my flights being canceled and boredom. Basically, I took a day trip from Fort Worth to Waco as I was supposed to fly out the next day. When that got canceled I decided to drive up to Oklahoma City and Norman in Oklahoma. On that drive I got word that my flight was canceled for another two days, so I decided to just keep driving. I went all through western Oklahoma and into the Texas Panhandle into Amarillo. Then down to Lubbock and into New Mexico for Carlsbad Caverns National Park and back into Texas for Guadalupe Mountains National Park and down to El Paso. Then all the way across the state to San Antonio for a Spurs game and up to Fort Worth again where I caught my flight home at DFW. 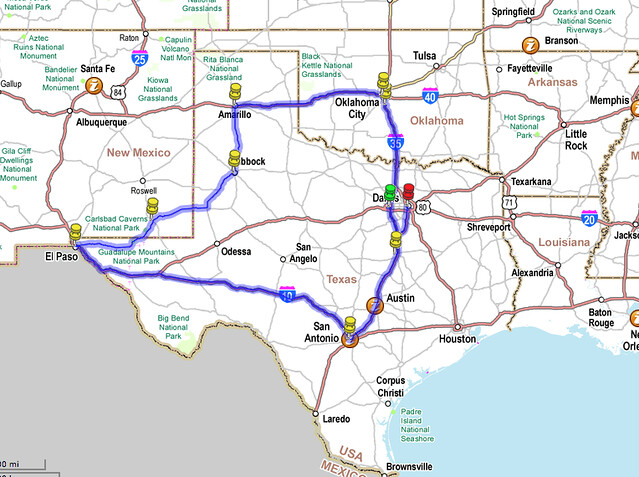 Leah: You drove through the least populated and isolated part of Texas. How many miles did you cover and what was the soundtrack to your road trip?

Lee:  I drove about 2,500 miles all together, and the soundtrack was all rock, mainly Motley Crue and AC/DC!

Leah: You visited the Panhandle Plains of West Texas, which happens to be where I was raised. It’s a lot different than any other part of Texas in terms of geography and culture. What were you able to see and do in the area? What were some of your observations?

Lee:  I loved West Texas; it’s a beautiful place. I love the wide-open spaces and gorgeous mountains. I also loved the mills, cotton fields, and just nothingness. It made for a great drive. I saw pretty much everything I wanted to see including the two main towns of Amarillo and Lubbock. I did stop at Texas Tech to check out your alma mater. It’s a beautiful campus, although the city itself is whatever, just a dusty old city, much like Amarillo, but a bit bigger. I did enjoy the whole experience though. 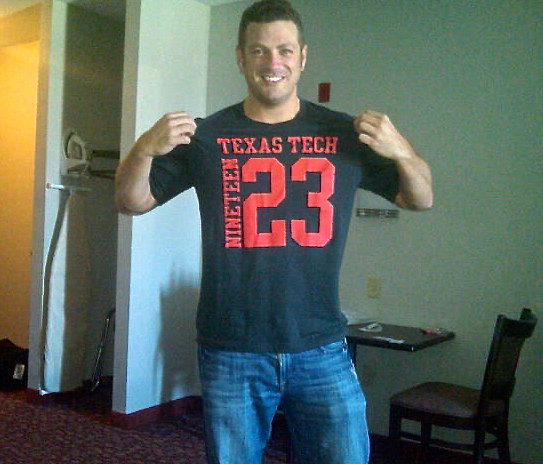 Leah: I’d be remiss {and biased} if I didn’t ask about your stops in New Mexico and Oklahoma. Tell me something that you liked or interesting about those two places.

Lee:  Carlsbad Caverns in New Mexico was the highlight of the trip. It was really cool and amazing to be down there. I’ve seen a lot of caves, but those were the best. In Oklahoma, I enjoyed seeing Norman where The University of Oklahoma is, but the highlight was seeing the memorial to the 1995 bombing in Oklahoma City. I’ve always wanted to see that. 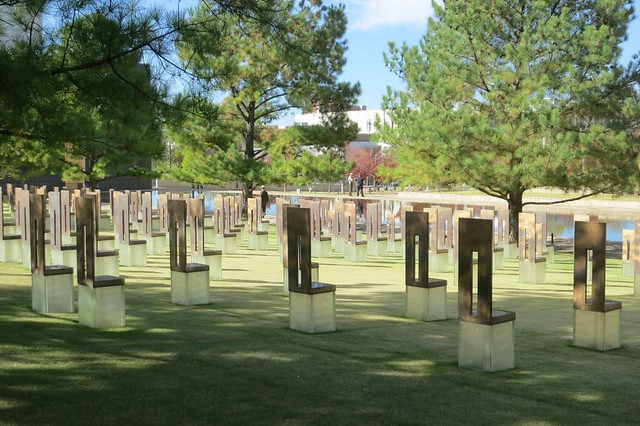 Leah: You’re a self-professed foodie. Texas as a huge and diverse place, but is best known for it’s Tex-Mex, bar-b-que, and home-style cooking. What were some of the best things you ate on this past Texas trip?

Lee:  I ate so much on this past trip that it’s hard to keep it all straight, but yes Tex-Mex and BBQ were amazing. My favorite meal was at Joe T’s in Fort Worth. It was amazing Mexican food and a great atmosphere.

Leah: I’m giving you a broad brush to paint with. How do Texans differ from New Yorkers?

Lee:  Haha, I could go on forever about the differences, but Texans are definitely nicer from the beginning and very up front and open. New Yorkers are more reserved when chatting with people. It’s just different, neither is better or worse. I have to say the tastes of the two are completely different. For instance, mutton bustin’ is beloved in Texas; to me it was borderline child abuse.

Leah: Like I mentioned earlier, you’ve spent some time in Texas previously. What are your favorite places? And, where have you not been that you’d like to visit?

Lee:  Austin and Houston are my favorite places in Texas. Austin is one of the best cities in America, and I have a soft spot for Houston because I spent so much time there. The number one place I want to go in Texas that I’ve not seen is Big Bend National Park, and Marfa would be second. I would really like to do a road trip from Houston to Galveston, down to Corpus Christi, Brownsville, Laredo and up to Big Bend National Park and Marfa then up to Midland, Odessa and Abilene and ending back in Dallas. That’s quite a drive, but sounds like fun. Then I will really have seen everywhere in Texas!

Leah:  Yeah, that would be a hell-of-a-drive, but it would certainly be a memorable trip.