All great cities have great parks. New York’s Central Park, San Francisco’s Golden Gate Park, and Chicago’s Millennium Park are just a few of the best urban parks in the United States. But what does Houston, the nation’s fourth largest city, have to offer? You might be surprised. 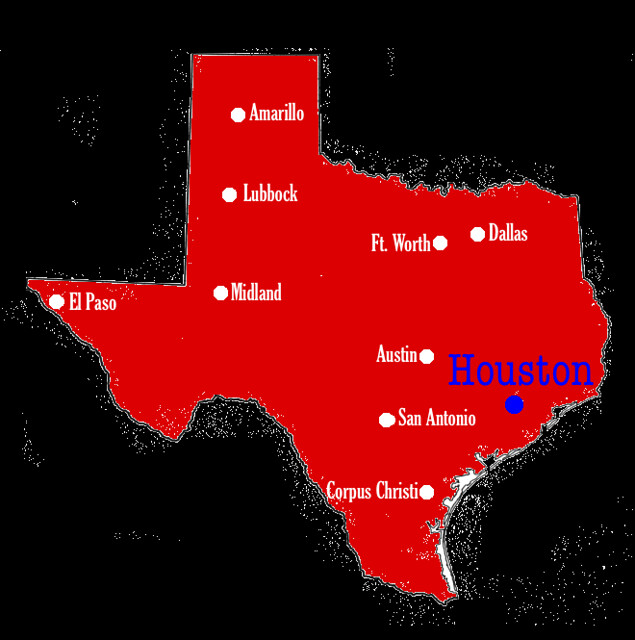 Houston’s been my home for a decade, and I’ve yet to scratch the city’s surface. Although, one place I often find myself is Discovery Green. 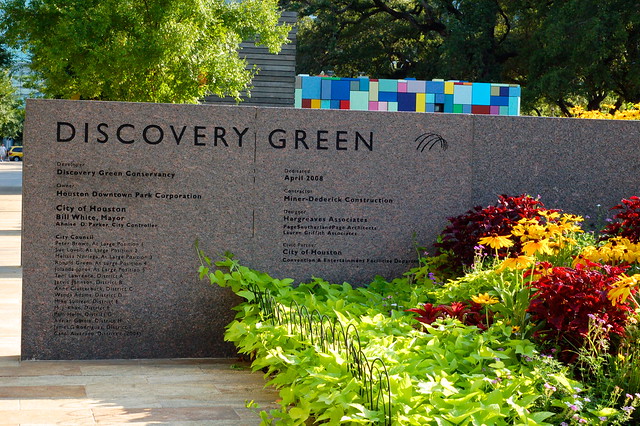 This twelve-acre park sits on the edge of downtown and was created by the City of Houston and the non-profit group, Discovery Green Conservancy. The development of this lush, urban space began in 2004 with the land being acquired. Originally a giant parking lot, the purpose was not just to provide relief from the concrete jungle, but to attract conventions to the city.

Surrounded by George R. Brown Convention Center, Minute Maid Park, and Toyota Center, Discovery Green is located in a prime location. Throughout the year, the park attracts hundreds of thousands of visitors not only for the environment, but also for the countless events, most of which are free. 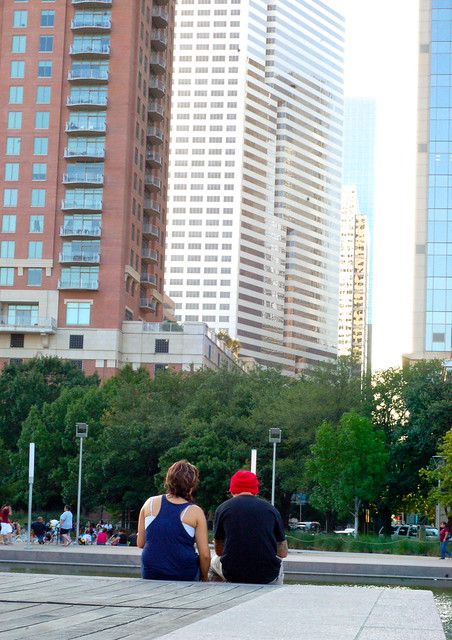 Discovery Green is a recent addition to Houston’s landscape as it’s only been open since April 2008. Compared to other great parks, Discovery Green is in its infancy, but certainly has made an impact.Travel and Leisure even named it one of “America’s Coolest City Parks” in 2011. 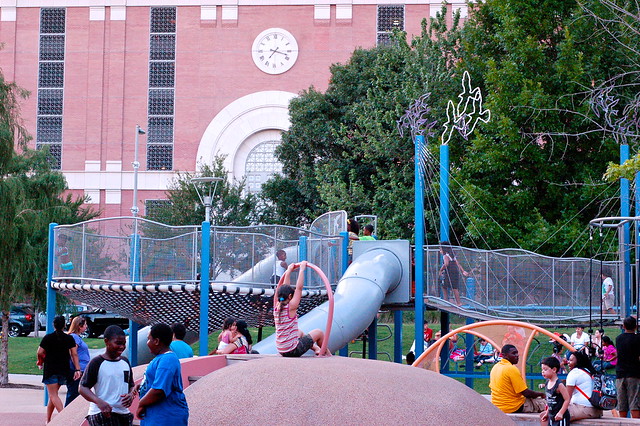 Kids flock to the John P. McGovern Playground. Located near a tree-lined hill, this quirky playground’s design was influenced by the migrating birds that fly over Houston. With countless opportunities for exploration, children are often entertained for hours. 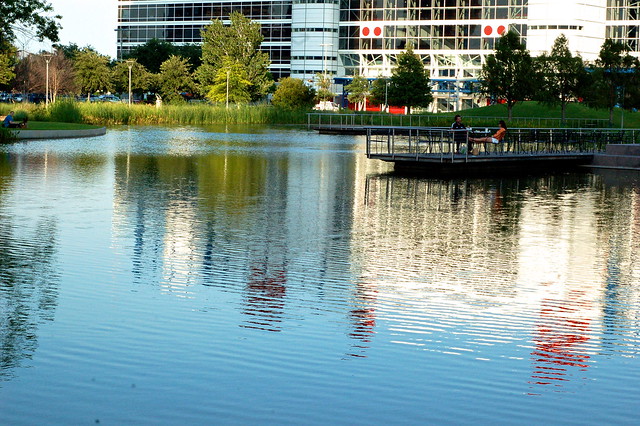 Near the Anheuser-Busch stage is one of my favorite features of the park, Kinder Lake. At nearly an acre in size, this man-made lake features a water garden and a pier with tables and chairs to relax. Remote control boats can be rented within the park or you can bring your own. One of the best things about winter in Houston is that Kinder Lake is frozen and turned into an ice rink. From Thanksgiving through mid-January, the ice is open. I particularly love the atmosphere created when Christmas-themed movies are shown during the evenings. 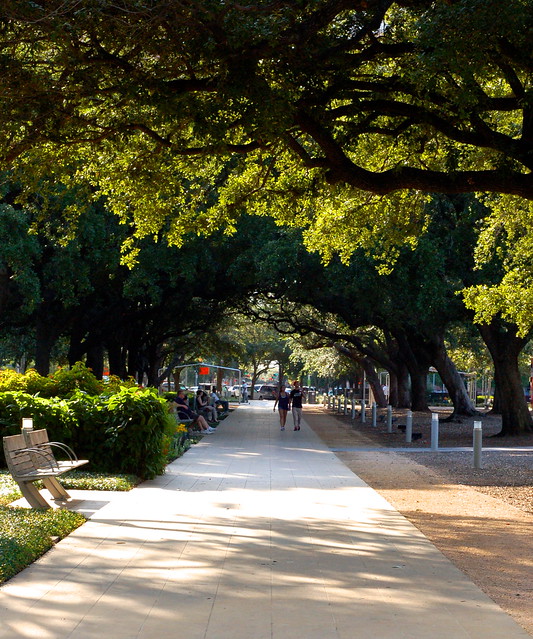 Giant, one-hundred-year old oak trees form a canopy over the limestone path known as Brown Foundation Promenade. It’s probably the coolest, most relaxing part of Discovery Green, and the benches are highly prized for their shade and prime people-watching location. 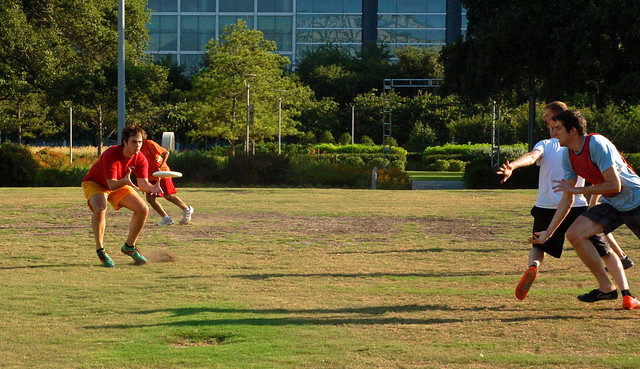 The largest green space is located in the middle of Discovery Green. At 1.7 acres, Jones Lawn is where park visitors can participate in active pursuits. Games of Ultimate Frisbee, flag football, and soccer are often seen being played. 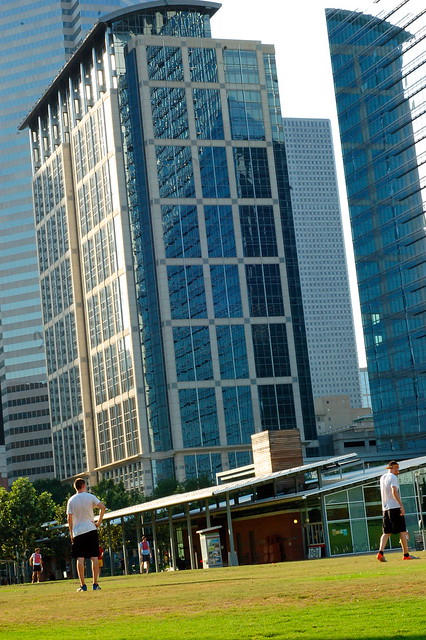 There are a couple of dining options in Discover Green. The Lake House offers a casual atmosphere with burgers, hot dogs, chicken, and other snacks. There’s indoor seating, but on a beautiful day, the tables outside are hard to come by. For an upscale meal and one of the best views of the area, visit The Grove.  World-famous Chef Robert Del Grande, developed a rustic American menu specializing in seafood, rotisserie specialties, steaks, and sandwiches. This modern space of steel, wood, and glass blends seamlessly into the Discovery Green aesthetic. 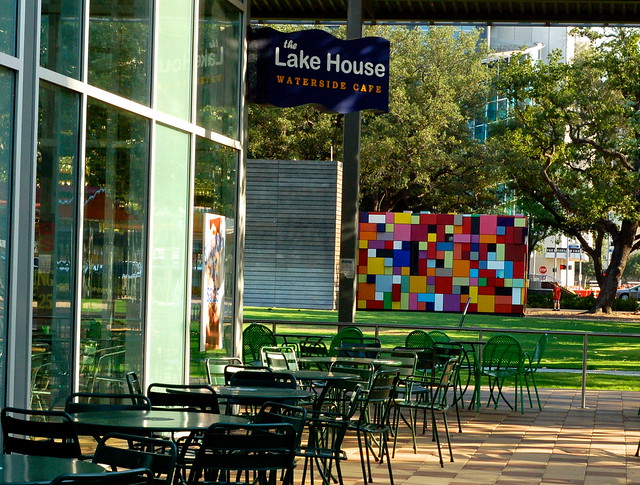 During Houston’s hot summers, the most fun and laughter can be found near Gateway Fountain. This is the spot where children of all ages beat the Texas heat. 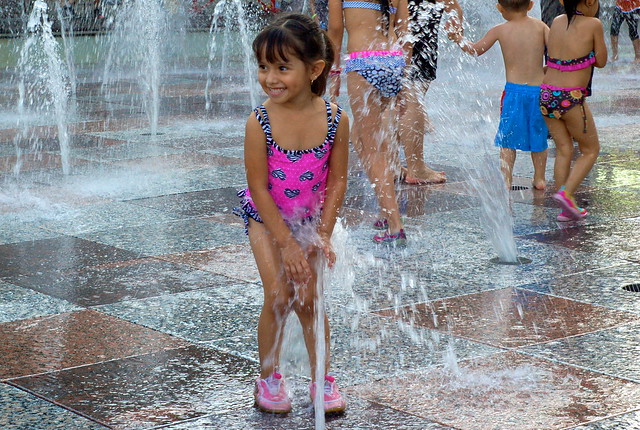 Sloping granite tiles create the surface while water creates the fun. With jets that arch the water as high as fourteen feet, Gateway Fountain might be the most joyful, if not coolest, place in the city. 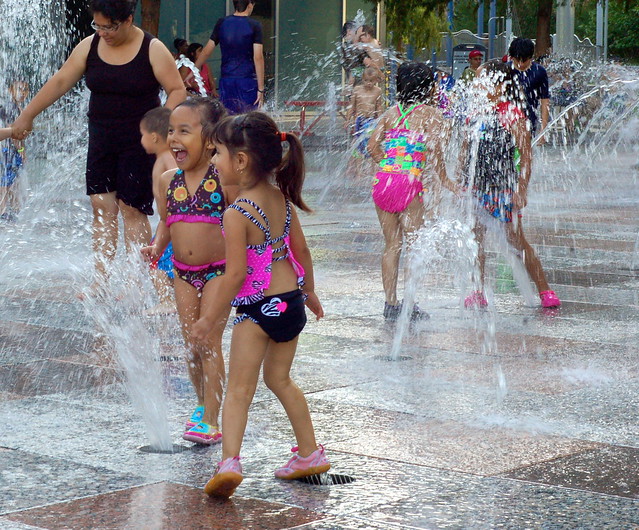 The water randomly shoots to varied heights and keeps those seeking to cool off waiting with anticipation. And the higher the water rises from the granite floor, the louder the squeals of delight. 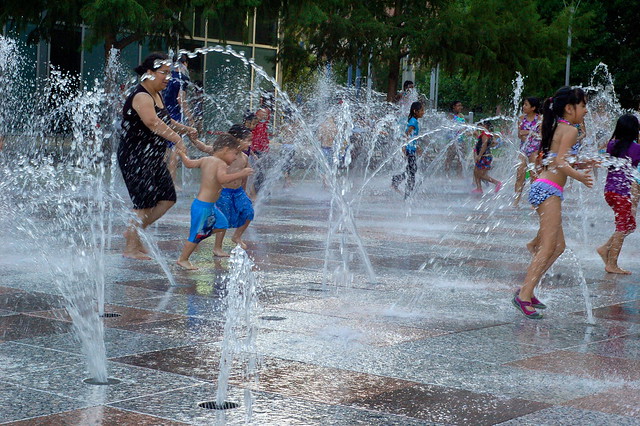 The Sarofim Picnic Lawn is the perfect place to relax and bask in the Texas sun, but the most eye-catching aspect of this area is the Mist Tree. Created by artist Doug Hollis, this interactive water feature draws in children as well as adults. 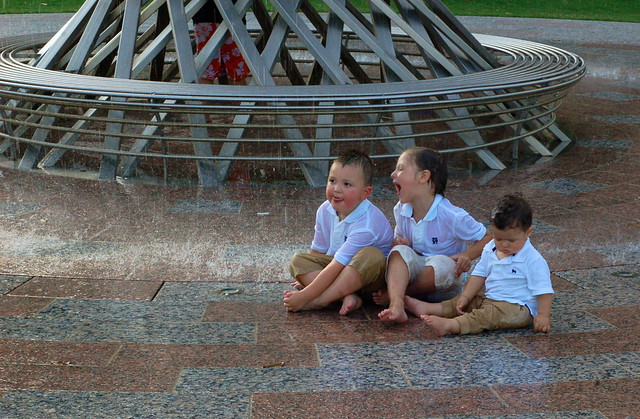 Made from stainless steel, this sculpture forms a mist cloud and creates a curtain of rain through the use of nozzles. This environmentally-friendly feature recirculates the water and turns itself off in the event of too much wind. 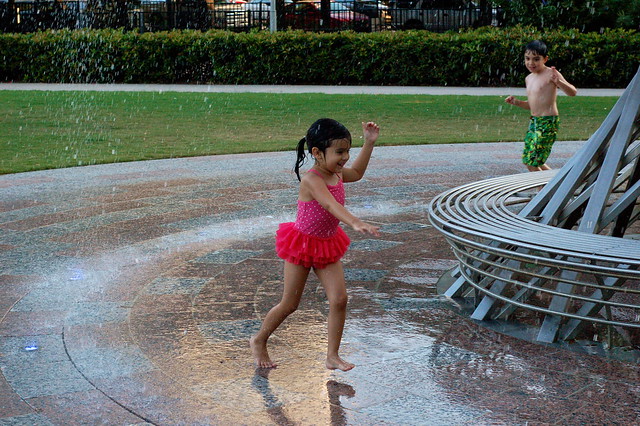 With a park full of unique identifiers, perhaps the most well known is the odd-looking red-white-blue sculpture across from the George R. Brown Convention Center. 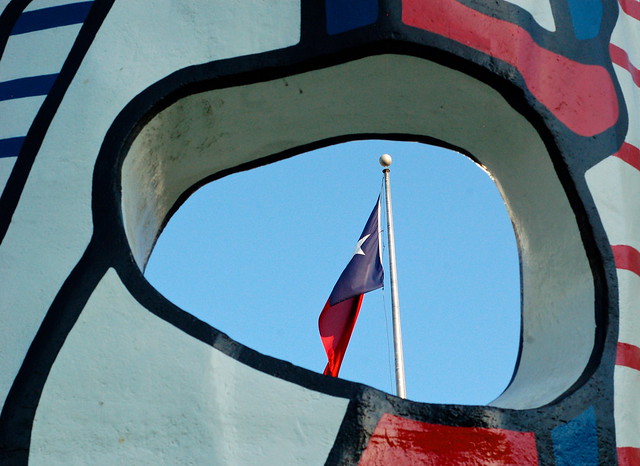 This free-form sculpture by French artist, Jean Dubuffet, is entitled “Monument Au Fantome” or “Monument to the Phantom” in English. Seven forms were chosen that represent Houston: a tree, church, chimney, dog, phantom, hedge, and mast. The forms are set in somewhat circular pattern, but provide enough room to squeeze through and explore from the inside as well. 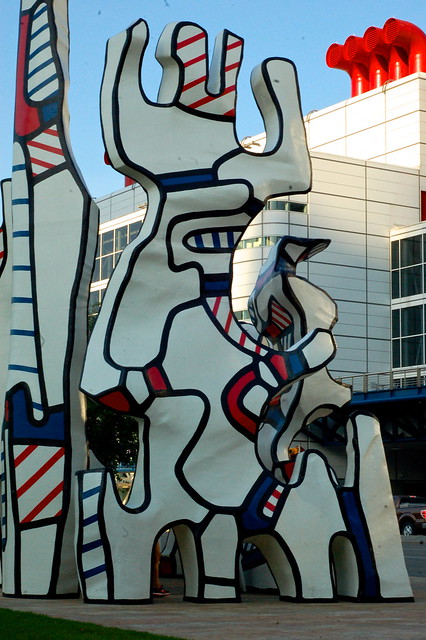 There’s so much more to Discovery Green. Dog runs, jogging trails, indoor and outdoor reading rooms, and even a branch of the Houston Library are found throughout. There’s also wireless Internet available in the park. Free entertainment abounds in the form of concerts, family and date night movies, exercise and dance classes, and a monthly flea market. In short, there’s something for everyone at Discovery Green. 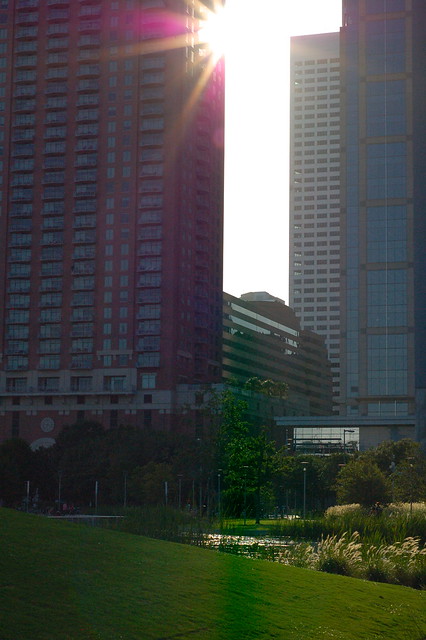 In my decade living in Houston, I’ve seen Enron Field change to Minute Maid Park. I’ve seen downtown become a destination for something other than the giant office buildings. There are bigger parks in Houston, but I really enjoy the juxtaposition of the steel and glass against the lush landscape of Discovery Green. It’s a place for all seasons and an escape from the madness that six million people create.