Just off of I10 and about 190 miles east of El Paso, lies the world’s largest spring-fed swimming pool.

In the shadows of the Davis Mountains is Balmorhea State Park and its famous swimming pool. Technically the park is in Toyahvale, but the closest town with groceries and a gas station is Balmorhea, just four miles away. Perhaps the term “famous” is giving the 1.75 acre pool a little too much credit. As a native West Texan, I know about this place, but I’d be willing to bet most Texans don’t even realize it exists. 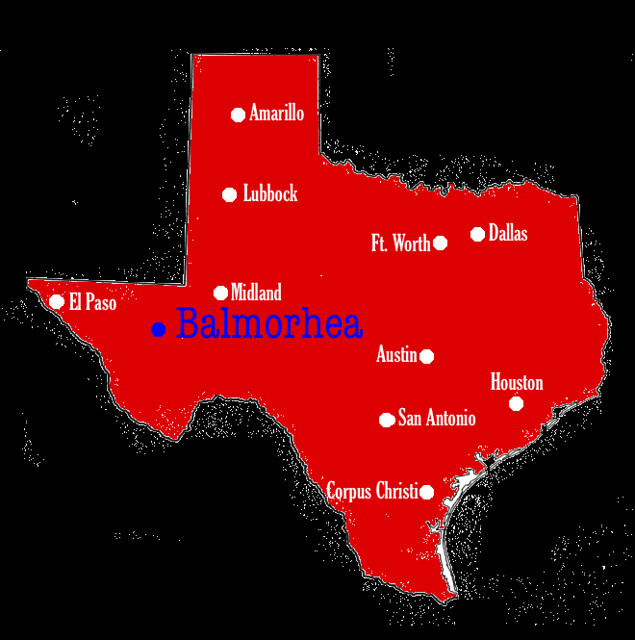 With water at a constant 72-76 degrees, it’s one of the best ways in West Texas to beat the heat. There’s nothing more refreshing than jumping in the fantastically clear water on a 100+ degree day. And in the winter when snow and freezing temperatures are common in the area, steam rises off the pool. 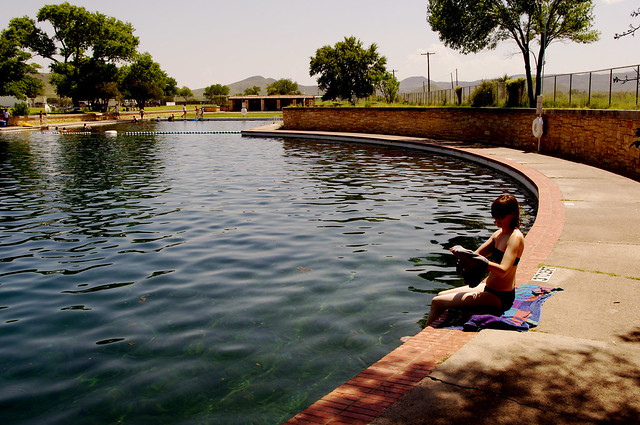 Balmorhea State Park was built as part of President Roosevelt’s New Deal by the CCC during the Depression from 1936-1941. Although the park was opened to the public in 1968, there’s evidence that these waters were vital to the existence of the people and animals of the area for hundreds of years. Indian artifacts have been found and Mexican farmers watered their crops by hand digging irrigation canals. 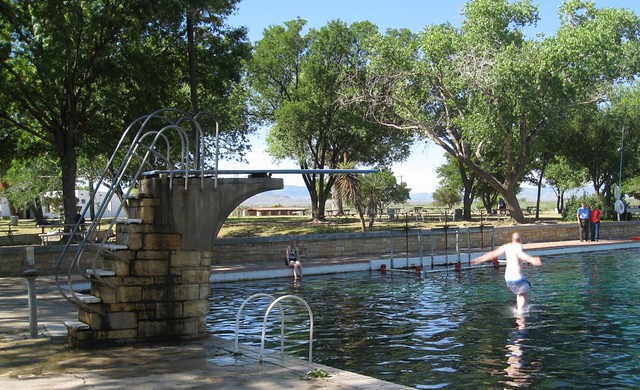 Now this 45.9 acre state park is a place for wildlife lovers, campers, scuba divers, and swimmers. The San Solomon Springs feed this pool, and 22 to 28 million gallons flow through it each day. It holds more than 3.5 million gallons of water and reaches a depth of 25 feet. 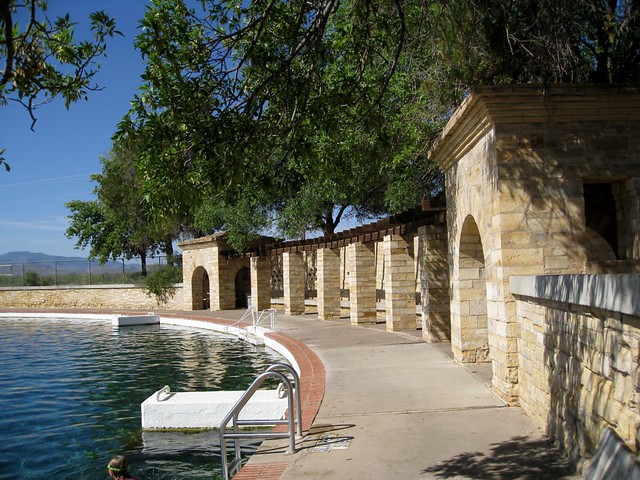 The pool is open all year from 8:00 am until sunset, and in the summer months, it can get quite crowded. In this sparsely-populated region of the state, crowded is a relative term, however. If you arrive early enough you just might get the entire place to yourself. When the parking lots are full, there will be no visitors admitted without a reservation. Additional people will be allowed into the park once others exit.

Jumping in the pool at Balmorhea State Park brings new meaning to the phrase, “swimming with the fishes.” From the common catfish to endangered fish, you’re liable to have something brush up against your leg. Turtles and assorted other creatures live in the crystal-clear waters, too. There’s also an opportunity to get a peek of life underwater through a window built below ground. But marine life isn’t the only kind of wildlife you’ll encounter. Throughout the park, you’re likely to see deer, various birds, and javelinas. A word of caution: Avoid the javelinas. I don’t care how cute you think they are.

Because of the depth (25 feet) and the clearness of the water, the pool also attracts SCUBA divers. In fact, classes of want-to-be SCUBA divers take to these waters often. If you’re already certified, you’re welcome to dive, but you must bring proof and another diver. Individual diving is allowed using the buddy system, and night diving is permitted. 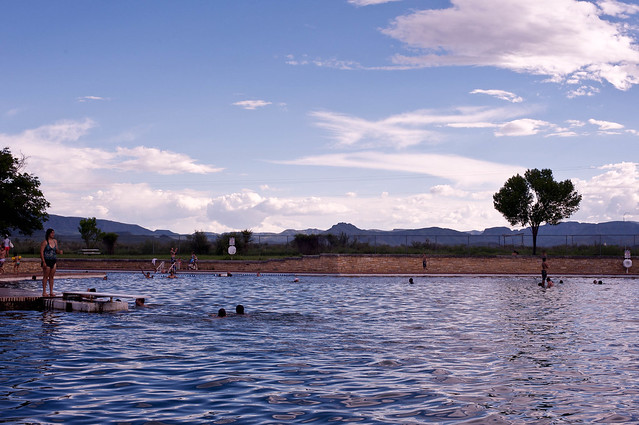 The calm and soothing water is seductive and relaxing. As large as the pool is, it’s easy to find your own bit of heaven. There are no lifeguards on duty, and visitors are warned to swim with caution. Also, swimmers under the age of 18 must be with a parent or guardian or have their written permission. 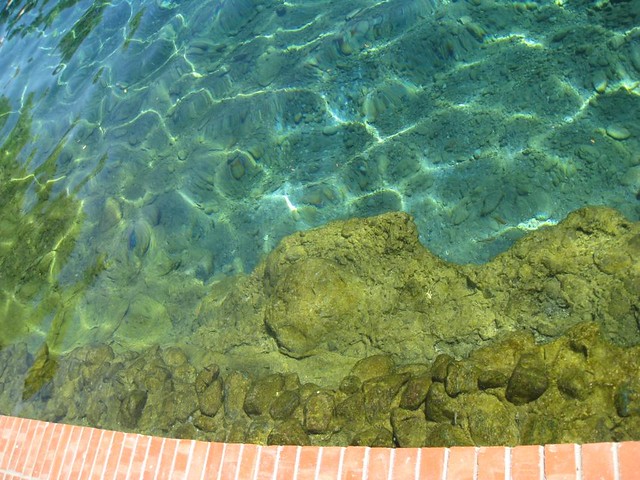 Throughout the grounds surrounding the pool are picnic tables available for visitors’ use. For those wanting to spend the night in Balmorhea State Park, there are camping facilities with restrooms and showers, cable television, and electricity.

If you’re not the camping type (me), there are motel-style accommodations called the San Solomon Spring Courts available. Starting at $65 you can get one of the 18 adobe rooms located just yards away from the pool. 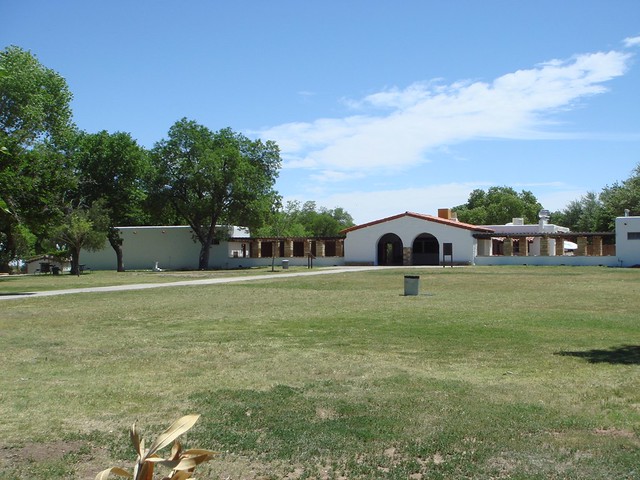 Balmorhea State Park isn’t something that’s just happened upon. Since it’s located in such a remote part of Texas, you really have to make it a point to visit. The park and its pool have flown under the radar of most Texans for decades, but one hot summer day swimming in these pristine waters will have you burning up I10 to get back. 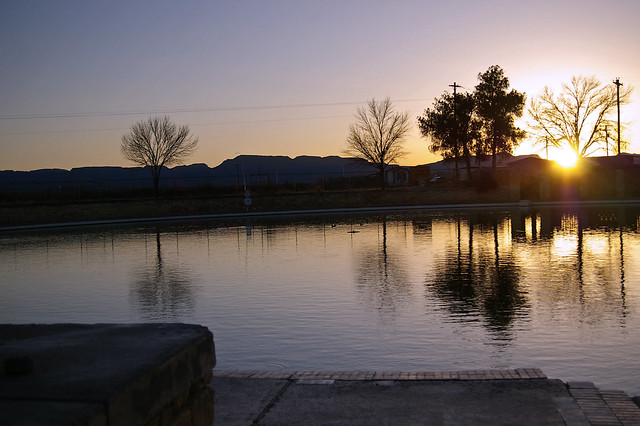 And just when you’ve thought you’ve had the best day ever, the molten-hot sun slides behind the mountains, the winds calm, and the heat dissipates. The stars wink at you as if they know a secret. The sounds of animals, some of which you’ve never heard of, speak to you. All of a sudden, everything is silent, and you’re the only person in the world. Now you’re certain that you’ve had the best day ever.

Books and Busts in Dublin